Ed Hood brings the Berlin ‘6 Day’ to its climax with the big chase finale, but there were more tales to tell before the camper-van could be packed for the drive and ferry trip to Copenhagen for the next and last ‘6 Day’ of the 2015/16 winter season.

If you’re a Soul Boy or Girl you’ll know that great Frankie Beverly and Maze tune, ‘Joy and Pain?’

‘Joy and pain, sunshine and rain,’ goes the lyric. We had both on nights four and five. Night six, the finale? That’s another story, I haven’t thought of a clever title for that one, yet. . .

Mark’s chat with Kenny de Ketele about the other teams combining against the GB boys paid off, the peloton cut them just a little slack and Mark and Germain took Sunday’s Day Four big chase in fine style in front of a full house.

Sunday sessions are cool in that they finish at 17:15 BUT they start at 12:00 noon – so there’s no time to ease yourself into feeling human of a morning. The BlackBerry beeps. . .

Waken, shower, a quick coffee, get to work on the clothing then up to the track. Normally I like Jess Glynne but on a Sunday morning when I feel like I’m a train wreck survivor our Jess pumping over the PA at big watts isn’t the answer. 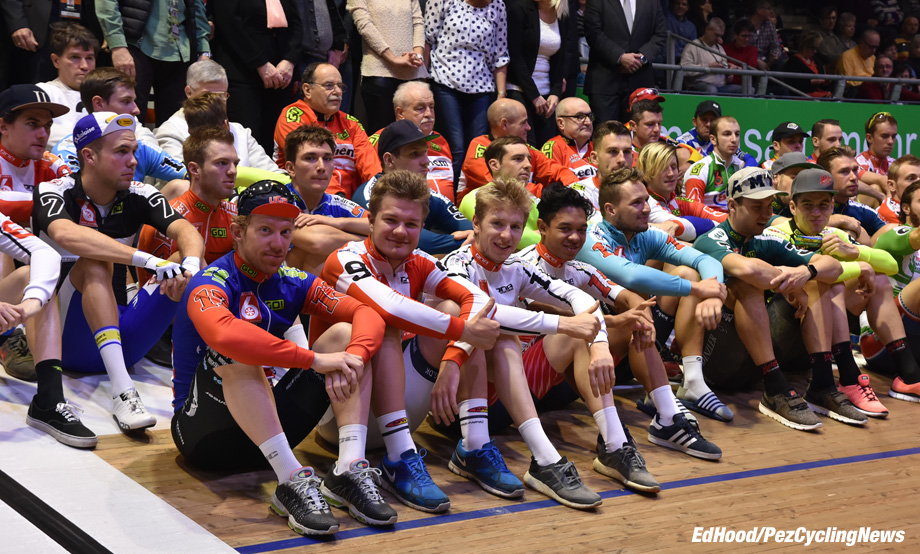 First up is the traditional team picture with six day guys, sprinters, stayers and all the drivers; no runners tho’ – we’re way down the food chain. 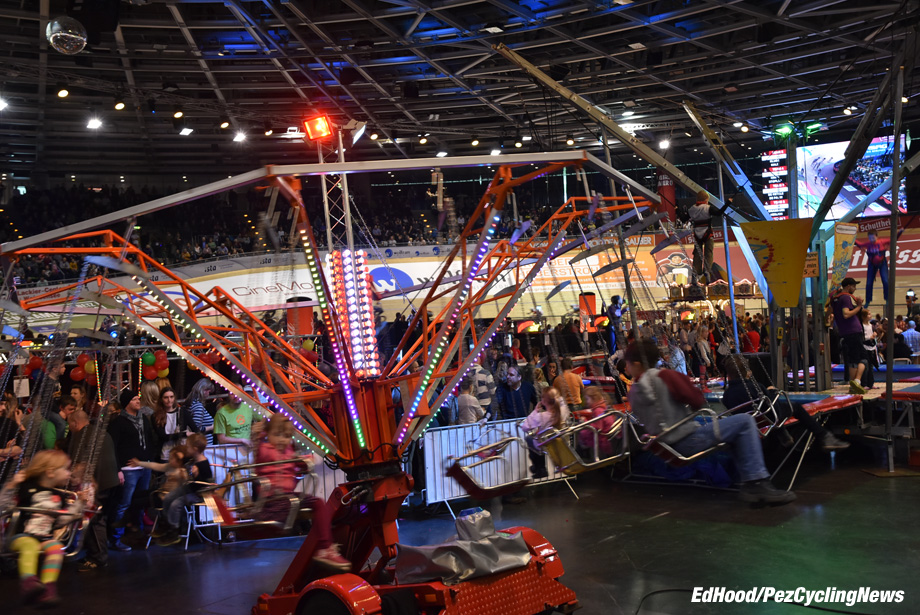 Sunday is ‘Familientag’ with roundabouts for the kiddies – just the job, even more noise. 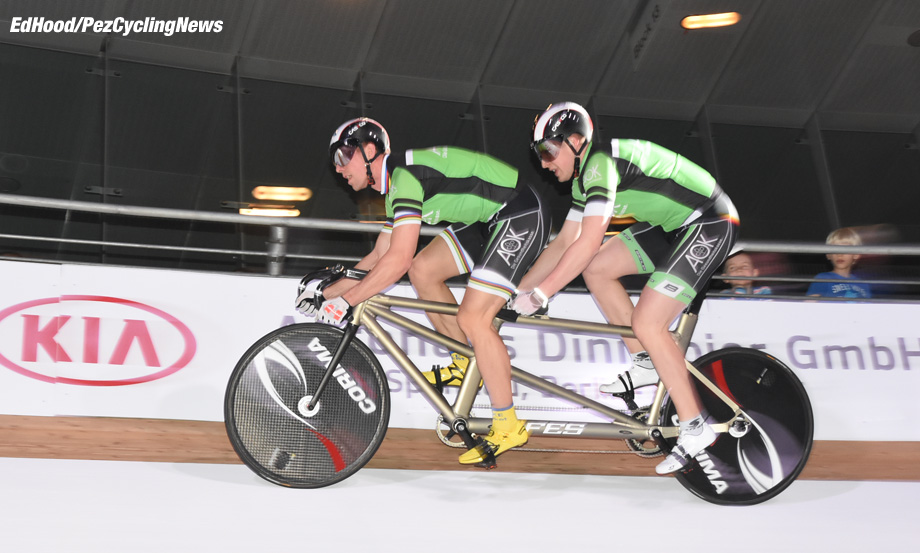 Those of you who follow the sprint scene will remember Stefan Nimke, he was Olympic Team Sprint Champion in 2004 and multiple World Team Sprint and Kilometre Champion. He’s ‘done a Craig Maclean’ and gone down the Paralympic tandem steersman route and tonight he and his ‘stoker’ were up on the boards to get a qualifying time for Rio.

With the lingo barrier I’m not sure if they did qualify or not but they sure looked impressive on their massive machine. 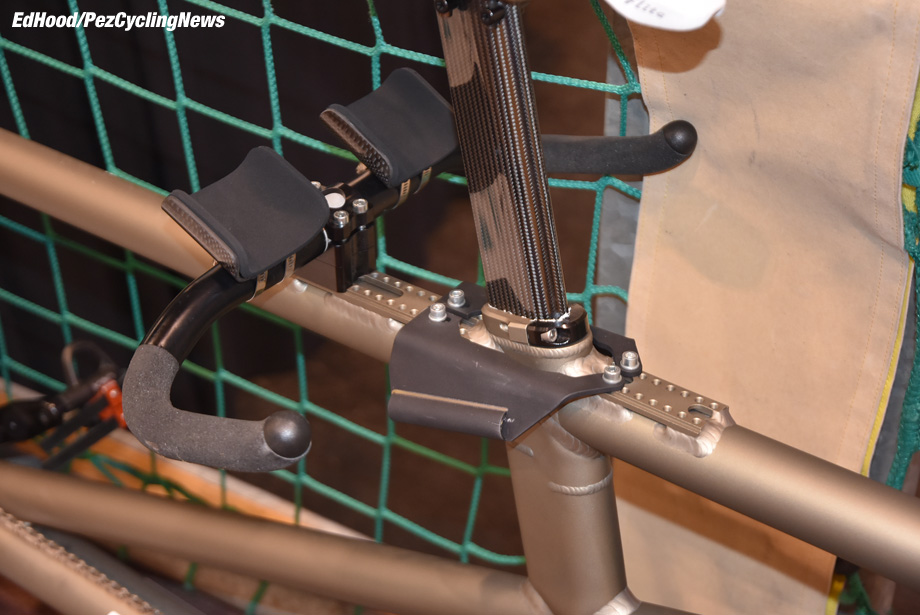 Upon close inspection the tandem proved to be a product of the Mad Max school of frame building, slapped together by mutants in a desert cave from scrap metal they had scavenged; Charlie Roberts or Dave Moulton would have needed resuscitated if they’d seen the welding.

Nate Koch took a win in the sprint – the benefit for us being that we got some Van Halen; ‘might as well jump. . .

Then came the big chase and of course, we had to endure Marcel Barth in the ‘balustrade’ laps before the real action started – complete with cape and crown. . . 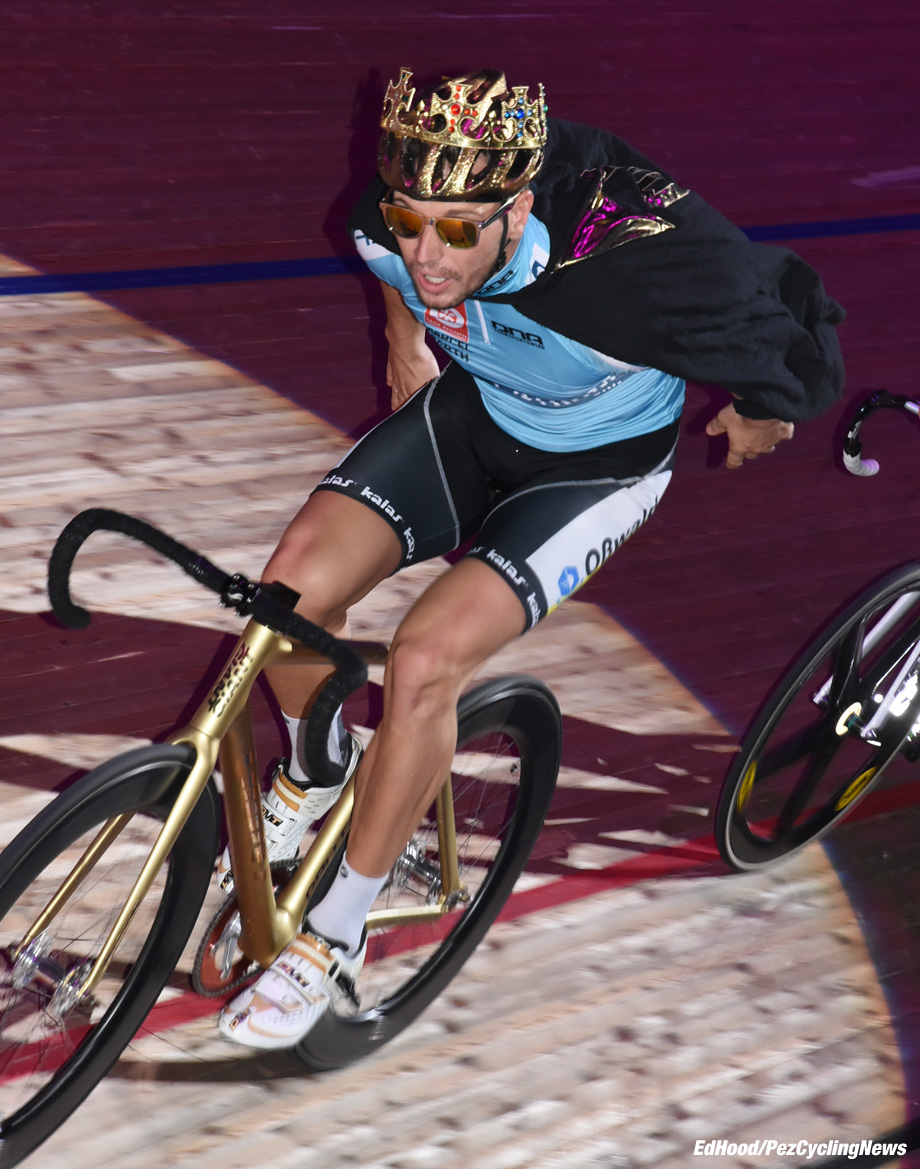 That boy needs therapy. With just a little less of the ‘combine stuff’ going on the boys ‘done good’ and took the flowers. And they handled the finish line interviews well – Germain heard the; ‘your father was a six day rider’ rap for the Nth time whilst Mark, when asked if he’d celebrate with a single or blended malt, replied; ‘milk!’ I had a bottle of legendary Scottish soft drink, Irn Bru to celebrate.

It was starting to look like I’d got my top five prediction wrong and they’d have to make room for our boys up there on the leader board.

Day Five was a long one; having got to bed at a reasonable time I was up at 06:30 am – still, a coffee and Barry White courtesy of the press room wi-fi was nice. 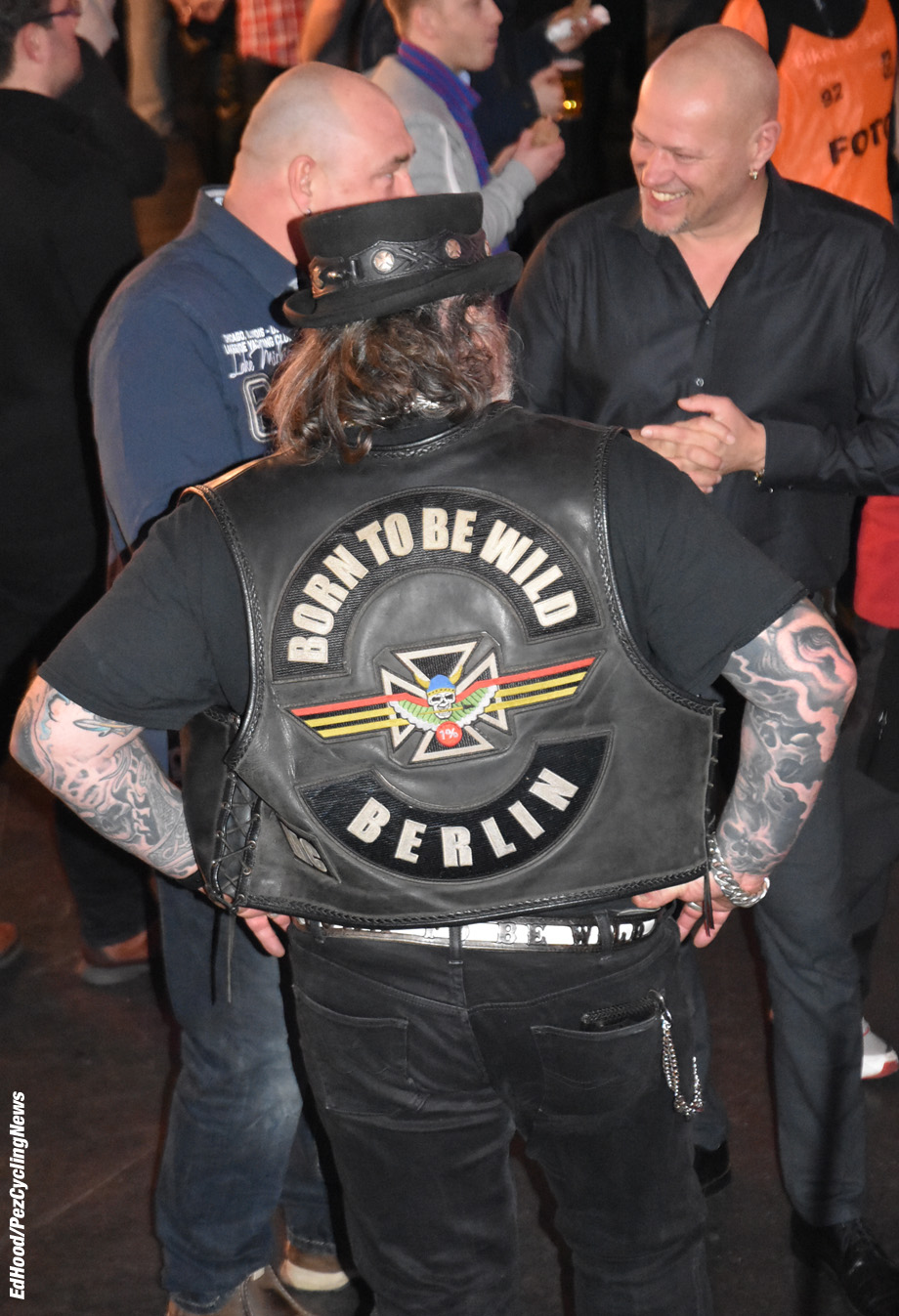 After Sunday’s ‘family day’ the crowd was more hard core on Monday – the liquor concessions did very well. . .

Before the rolling presentation each evening they have the ‘Parade of Aces,’ where the European and World Champions are presented to the crowd. Lucas Liss and Morgan Kneisky as world scratch and madison champions head the bill – but that said, with five riders up there it’s not like it used to be a few years ago when there were ten rainbow jerseys on the line. 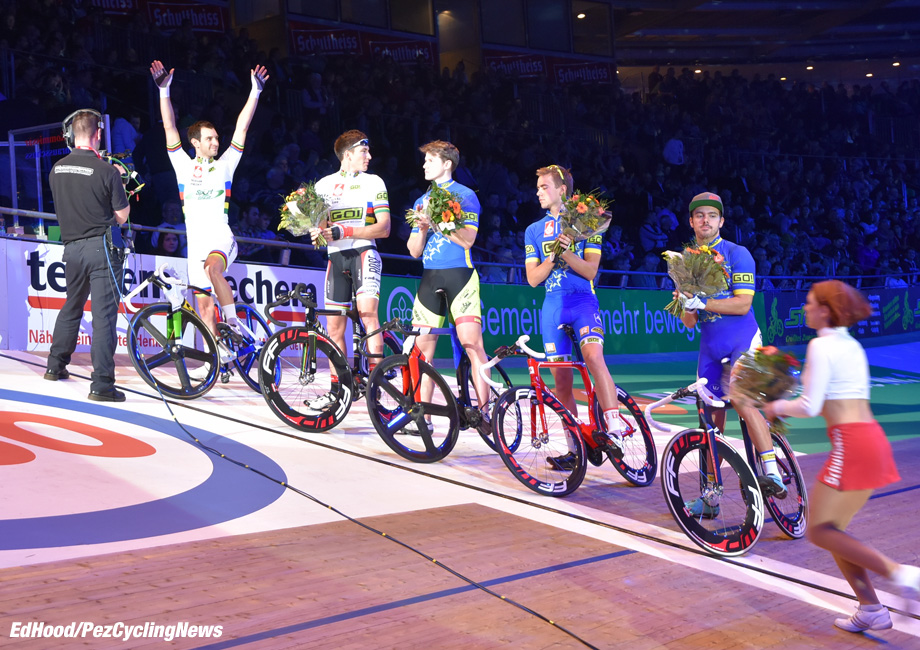 But as an added bonus, the Schultheiss girls dash out with the flowers. . . 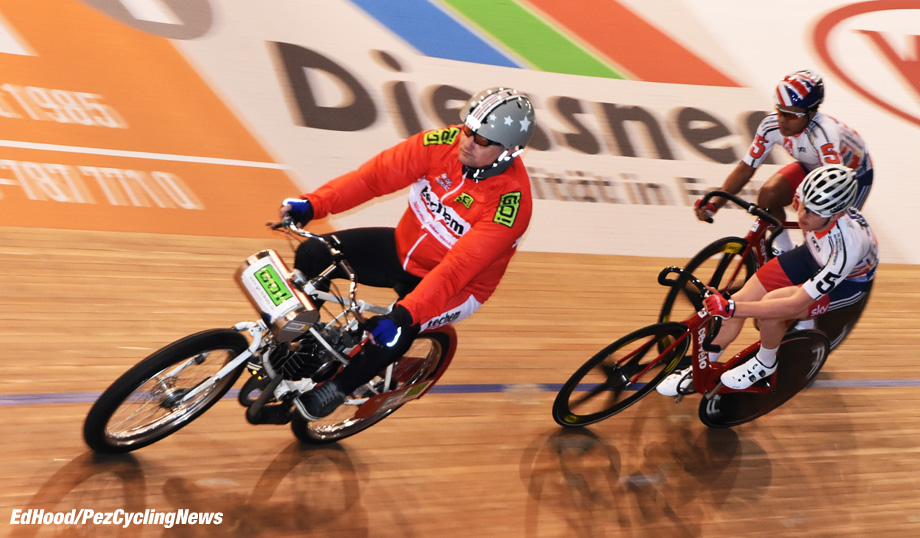 The main Derny saw our boys shut out; I long ago gave up trying to make sense of the Dernys – generally it’ll be the Home Boy or Kenny de Ketele, who’s a beast behind the wee motors. The team devil was different, the boys raced hard – if I was being honest, maybe too hard before the big chase – and won well, nabbing some valuable points. 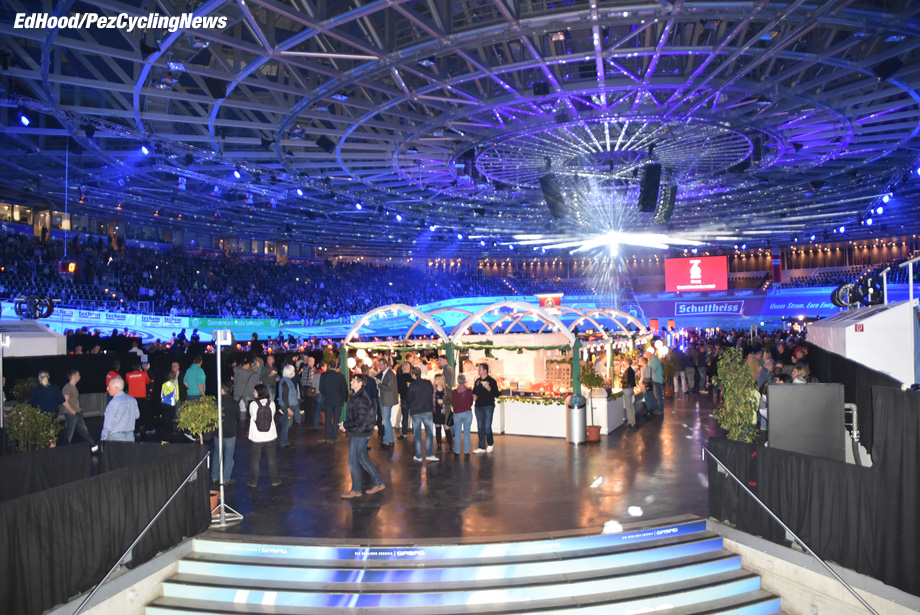 But I’m taking exception to the music they play when the boys win; Elton John, ‘Made in England.’ How about some Andy Stewart, ‘Scottish Soldier’ for Mark and Stormzy for Germain? (Stormzy’s a “Child of Grime” London rapper in case you didn’t know.)

Now we have to talk about the rain; the big chase didn’t go well for the boys – maybe they should have been a tad more conservative in that team devil? 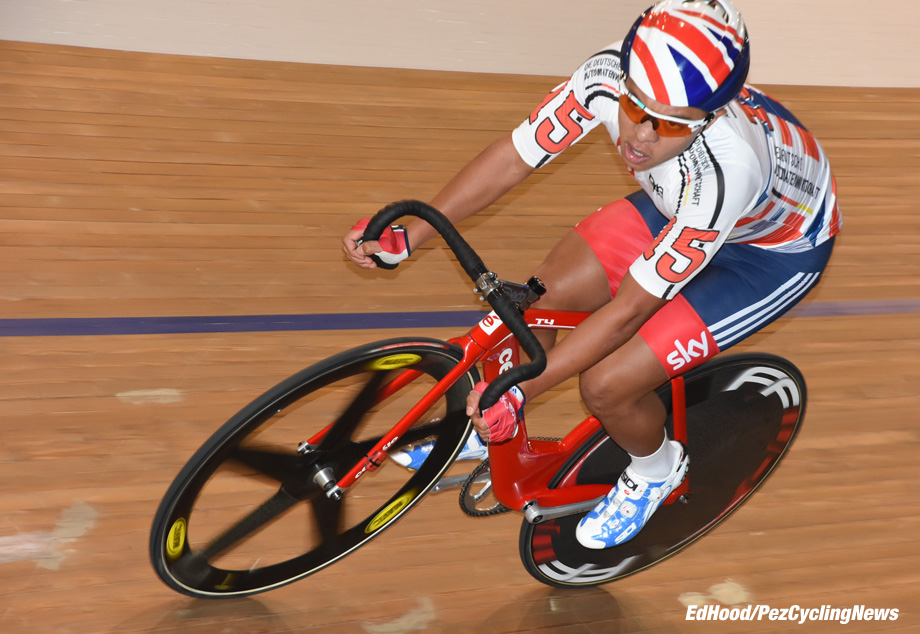 But there’s also little doubt that whilst it wasn’t hard core combine riding against them, ‘favours’ were being done – top five teams getting little ‘leg ups’ in the chase from lesser teams. The boys have been going well here up ’til now but with both riders spending the summer in Tuscany on the road with GB there’s no guarantee they’ll be back at the sixes come the autumn. But for many of the field it’s not just about this race, it’s about Copenhagen next week and then next season’s races and pay days.

It’s always good to ‘keep in’ with the good German riders, a good word and/or favour here and there can go a long ways to getting you a contract for Berlin or Bremen. It was de Ketele/de Pauw who took the honours with Kenny popping a wheelie to celebrate taking the winning lap. But Kenny, isn’t that Iljo’s trademark? And he can get his front wheel higher than that. . . 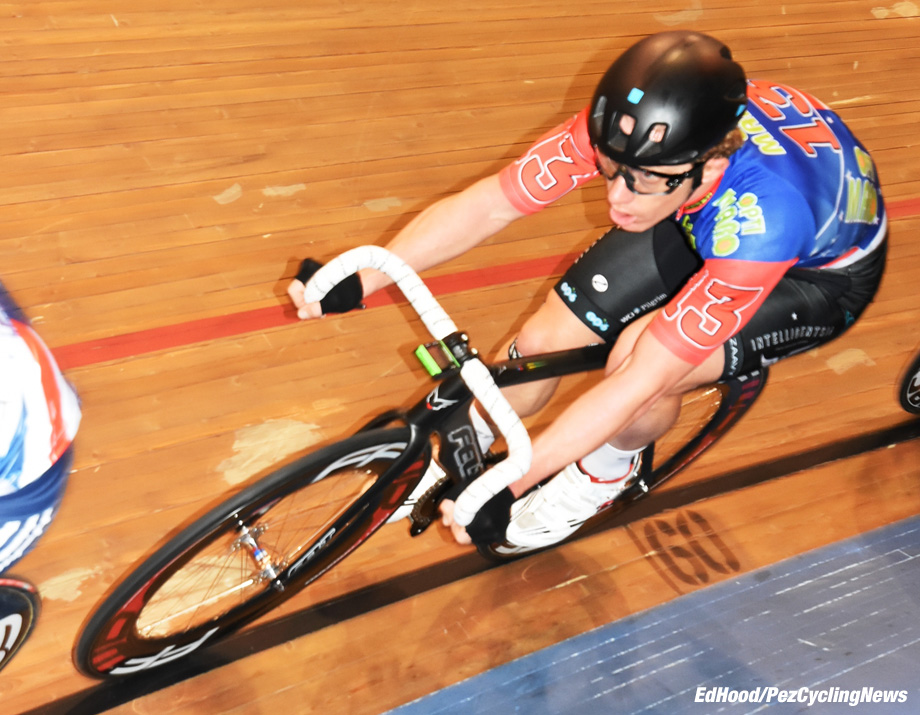 Daniel rode strongly in this chase and in the 30 minute chase which came later, albeit it was a lower key affair. 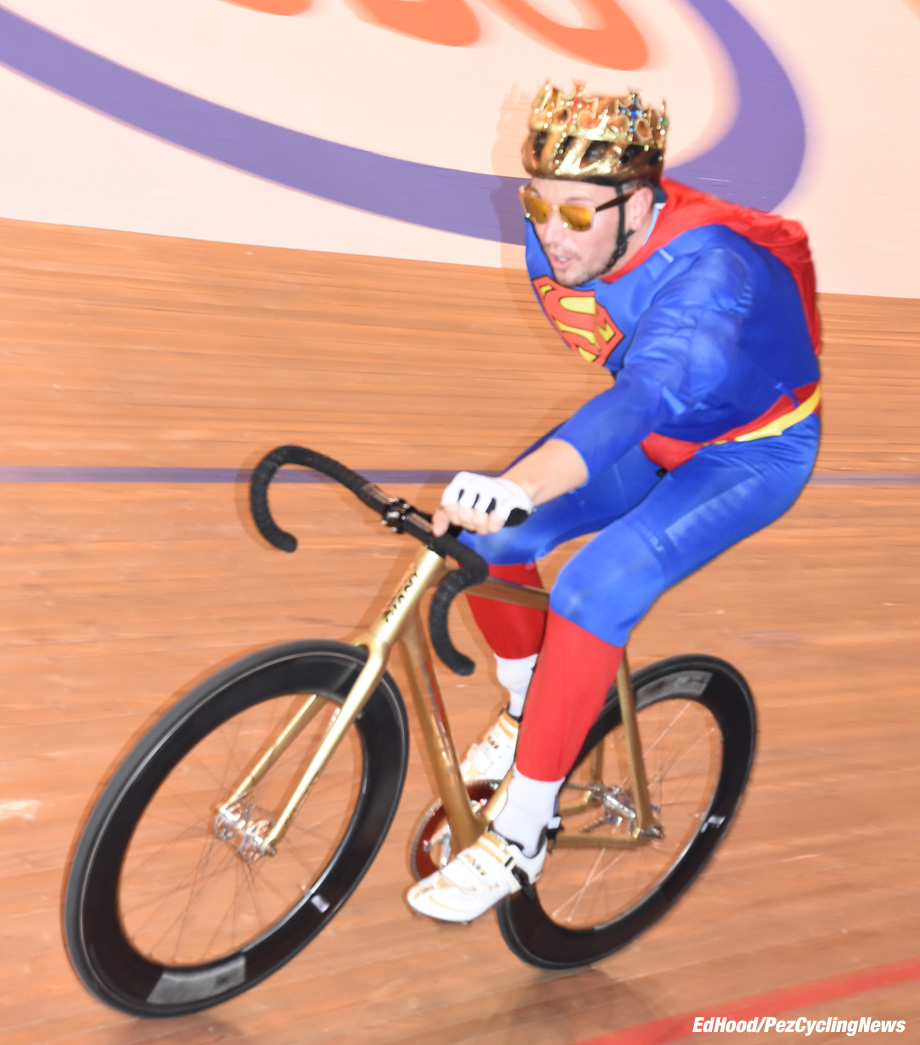 Mathias was our ‘last man standing’ – the only rider from our cabin to ride the final Derny race of the night. Still, that’s the last washing done. . .

Kneisky/Muntaner are the danger men, fifth is better that sixth on your palmarès and the Frenchman has already been interrupting Mark and Germain’s changes – just to make life difficult for them. The opening sprint series, which is usually a low key affair turned into a chase, with Mark and Germain taking a lap and two sprints along the way. The race was cut short however when Daniel’s partner, Melvin Van Zyl came down hard, ending up in hospital. 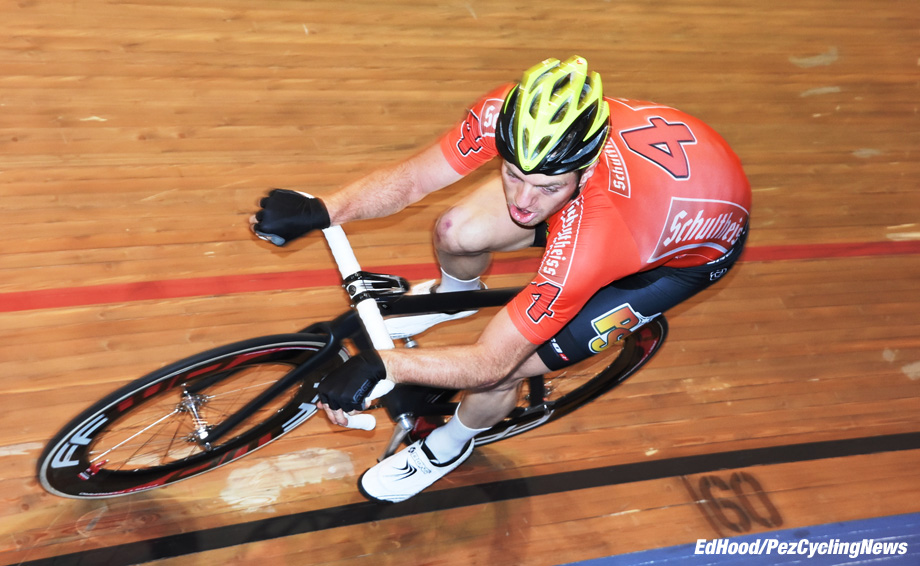 His countryman, Havik just kept on pedalling; ‘Yori Havik, the race is finished! The race is finished!’ boomed the PA. Team devil, the boys get third, Mark wants those points – if they get to 200 before the last chase they’ll get a ‘bonus’ lap gain. They have to be careful though – it’s a full 60 minutes final chase tonight and a bad patch towards the end of that could be disastrous. Forstemann takes the flying lap – 12.5 seconds. Derny – forget it, De Ketele and Kluge are up there. . .

Points race – we’re second to Hester and our Dane, Mathias, that takes the ‘Brits’ through 200 points and a bonus lap to put them fourth, ahead of Grasmann/Hesslich who are now fifth. 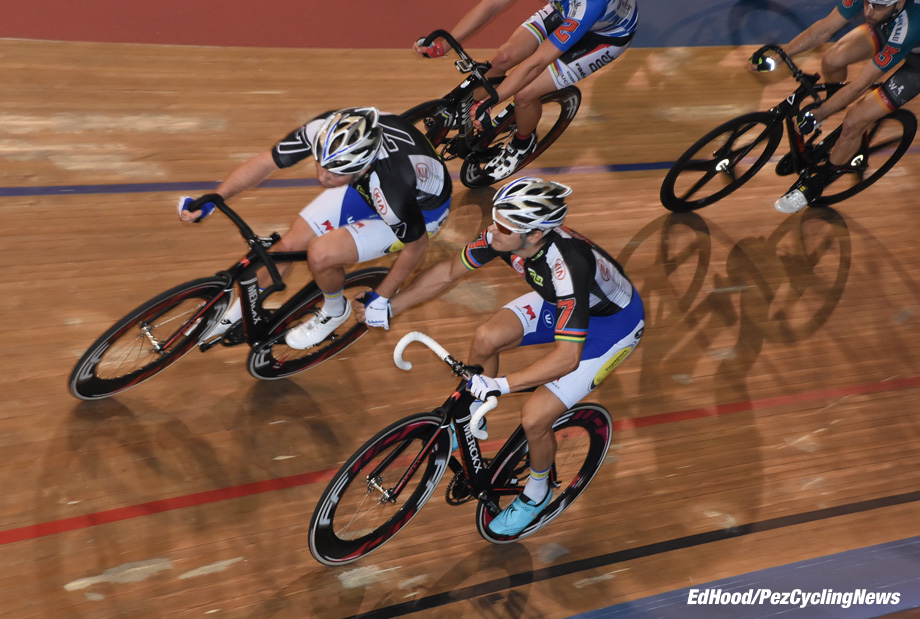 The last chase, 60 minutes and it looks set up nicely for the German win as first De Ketele/De Pauw drop sprint points to Kalz/Kluge then the Home Boys take a lap – which puts the Germans a lap shy but with a superior points total. When the two big Berliners go for a lap inside 20 to go after De Ketele/De Pauw have been setting a tough tempo but eased, it looks like the winning move to us as the crowd whistles its approval.

BUT! On the front, who should pop up? Messrs. Burton and Stewart who have ridden a conservative race up until now, marking Grasmann/Hesslich but little more. They set a very fast tempo which Havik/Stopler have to match or lose third spot – then De Ketele/De Pauw respond. That ‘winning lap’ which the Germans were sailing towards becomes a lost cause as Big Rodge’s piston-like legs don’t spin quite so freely. The laps click by, Burton/Stewart are showing that but for their hiccup yesterday they could have made the podium. 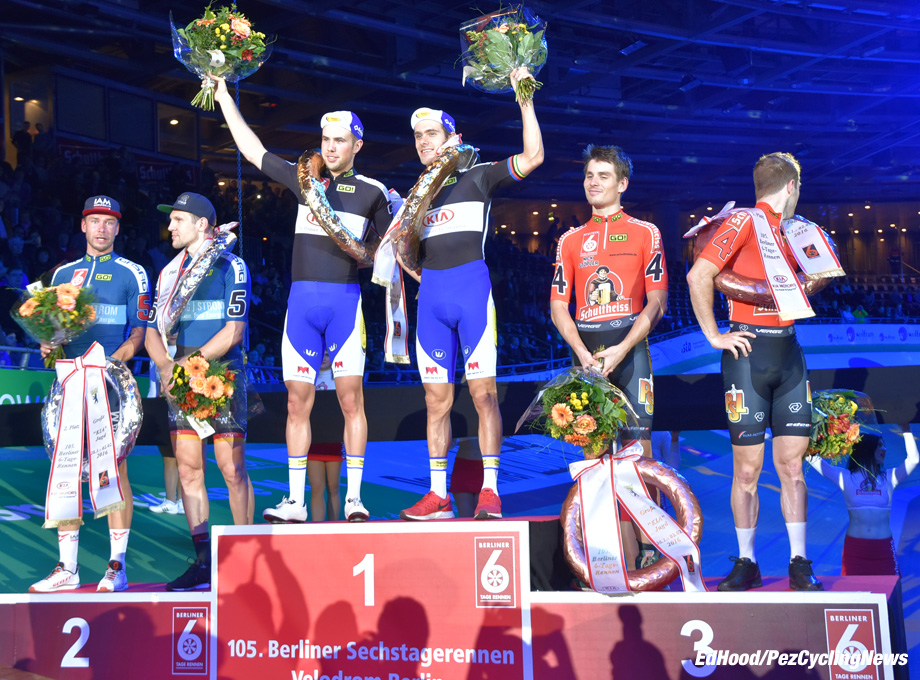 Kalz/Kluge put a brave face on it for the podium pics; the Dutchmen are happy – and the Belgians? They’re delighted – and they can even say to Germans; “hey guys, it wasn’t us brought you back, it was those Brits!” As Daniel said; “It would never have happened in a Bruno Risi six day finale!” But as Daniel also said; “The times are changing. . .”

No clever titles for the finale from me but if Germain and Mark continue to progress they way they have and return to the winter boards a year wiser and stronger, then they could just be the first all British team to win a six day in living memory. Whilst Germain and Mark head south to Tuscany; Mathias and Daniel head north to Copenhagen and the final six day of the season. 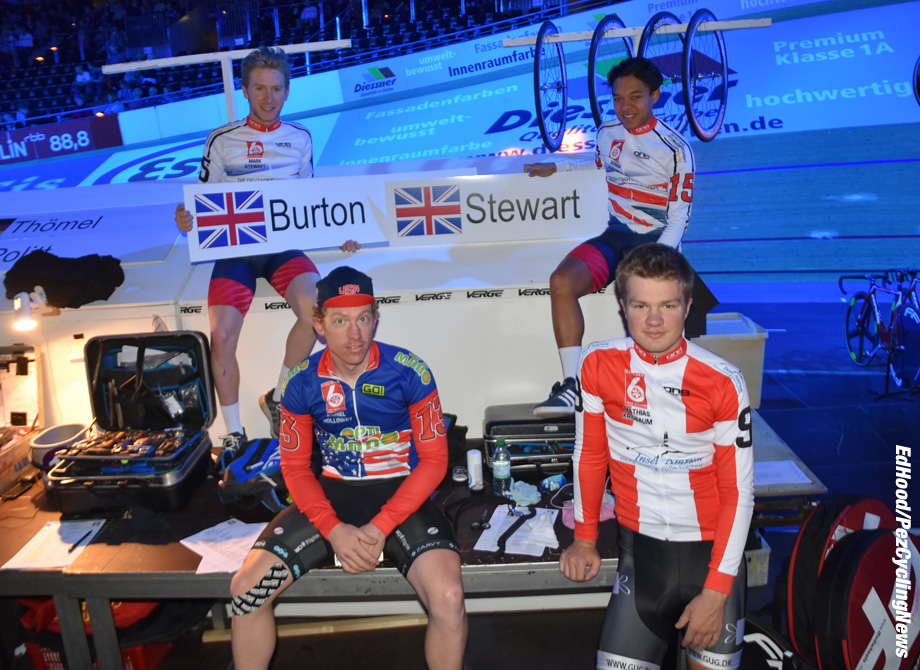 And of course, they’ll need someone to look after them. That’ll be us.

Keep it PEZZED for more from the six day track centre. What’s that? The Denmark ferry is cancelled coz of the gales. . .

Create Your Own Sidi Look!