Photo Report: Darrell Parks had a full-gas weekend at the 2014 Thompson Bucks County Classic, with a road race and a criterium he had his work cut out to bring us the best photos of the race action from Pennsylvania. This is Part 1 from the rain-soaked road stage with hard-man Zach Bell the deserved winner.

This year’s Bucks County Classic provided an exciting and diverse weekend of racing in eastern Pennsylvania. A huge field of 185 riders had signed on to race the season closer for both the UCI America Tour and the USA Cycling National Racing Calendar. The huge field, a wet and grueling 100 mile road race on Saturday followed by a hot and fast criterium course on Sunday proved to be just the ingredients required for a spectacular weekend of cycling. 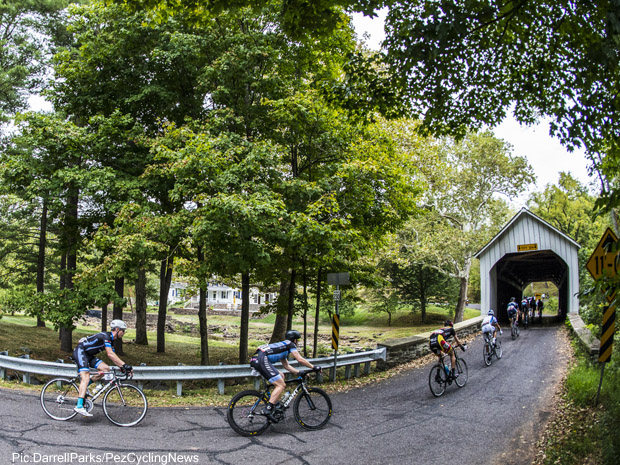 Racing through the Loux Covered bridge in Plumsteadville, PA

This year’s edition of the 100 mile road race featured 6 laps of the same grueling 14 mile circuit used in past editions. To change things up the start and finish locations were swapped so now the race started in Doylestown with the finish line on Main Street in New Hope. A short, punchy climb was thrown into the mix about 6 miles from the finish just to induce an additional sting into the already spent legs of the racers. With the largest field I have ever witnessed in a cycling race, the small country roads provided a challenge to navigate especially when the weather went south. The breathtakingly scenic route would take in not one but two covered bridges as well as a couple of miles beside the beautiful Delaware River. 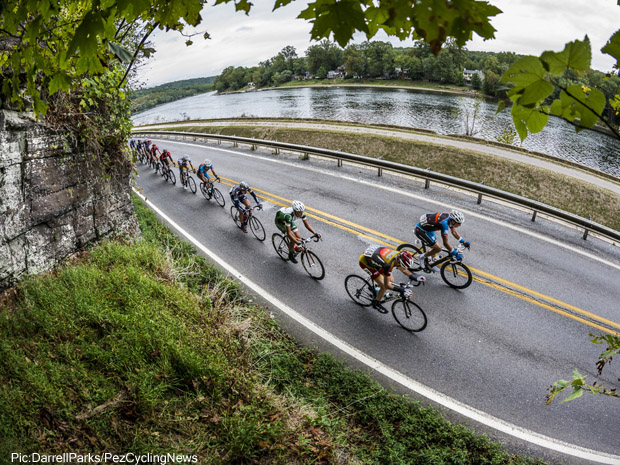 The race takes in the view along the Delaware river 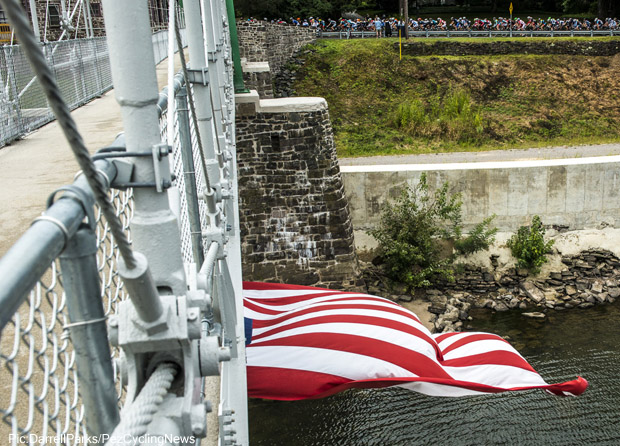 The Peloton races past the Pedestrian bridge that spans the Delaware river linking Lumberville, PA with Bull’s Island in New Jersey

Initially I thought I had made a bad choice to stop and shoot the pack racing by on the way out of Doylestown. That shot had left me “stuck” behind the peloton on the first trip up the Carversville KOM climb. I had wanted to shoot the large group of riders strung out as they climbed the hill. Fortunately I ended up right behind the peloton as they ascended the climb in mass. My ever competent moto driver, Simon, granted my request to stand up and shoot from the back of his Ducati as we slowly climbed the hill. 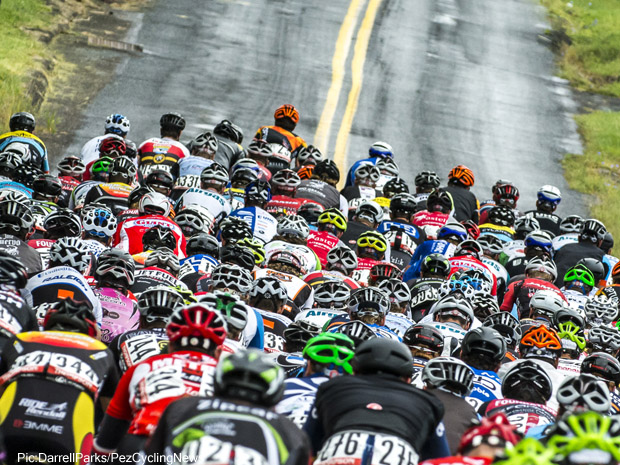 After the KOM the course runs along a few miles of basically flat and narrow roads until dropping down a quick and steep descent into the valley of the Cabin Run Creek and the first of two historic covered bridges. This is where a handful of riders went off the front to form the day’s breakaway. Optum Pro Cycling rider Jesse Anthony was in the mix and I managed to capture him on the fast descent as he distanced himself from the peloton. 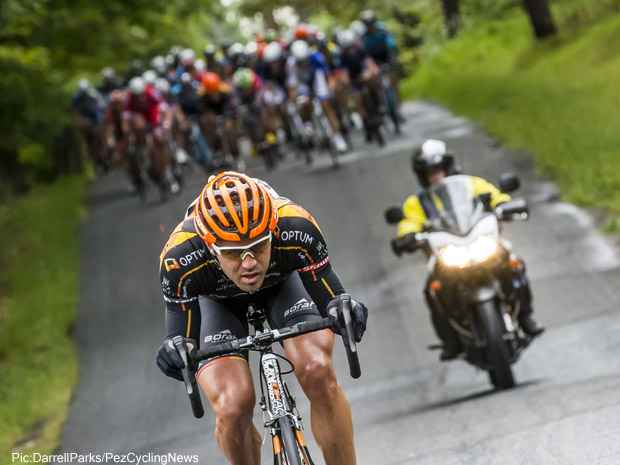 It seems like this was the year for racing in the rain as just about every race I shot was hindered with some sort of precipitation. This year’s Bucks county Classic road race would prove to be no exception. While racing in the rain can provide for some really exciting images it can also be the death of photography equipment. Though I’ve been fortunate in this regard, I know many photographers that have lost cameras to the rain this year. Keeping the lens’s clean on two cameras proved to be my biggest challenge of the day. Shooting with your gear covered in plastic “rain coats” is cumbersome at best, especially when doing so while perched on the back of a motorcycle. 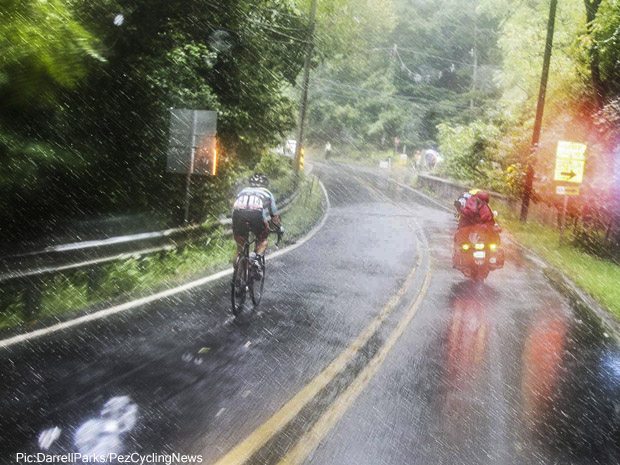 Oh the glamorous life of a cycling photographer

With the break now firmly established, the rain was becoming an issue for the riders in the form of crashes and for myself as I could only get off a couple of shots before needing to make an attempt at drying the moisture off my lens glass. The men off the front now consisted of Jesse Anthony (Optum Pro Cycling), Marc de Marr (United healthcare), Stephen Leece (Jamis Hagens Berman), Kevin Gottlieb (Airgas Cycling), and Zach Bell (Team SmartStop). They were all working well together and keeping the peloton at bay. 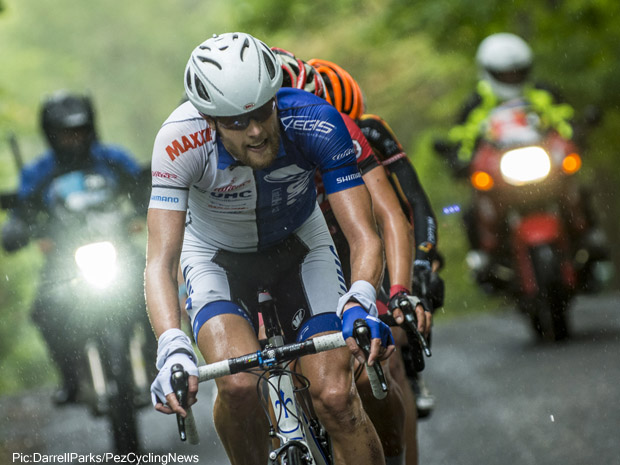 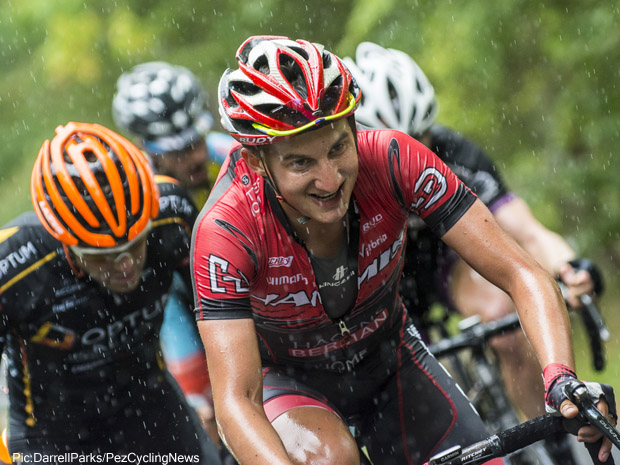 Behind the breakaway the peloton was doing its best to reel in the six escapees. In the mean time Airgas Rider Kevin Gottlieb decided it was time for some excitement and attacked his break mates. His time off the front was short lived as the others were not amused by his effort. 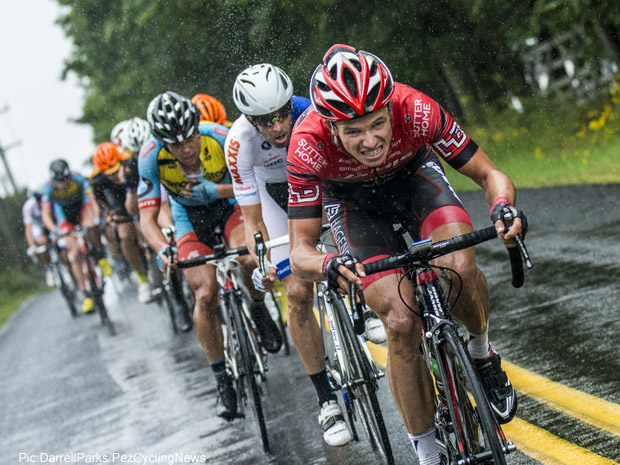 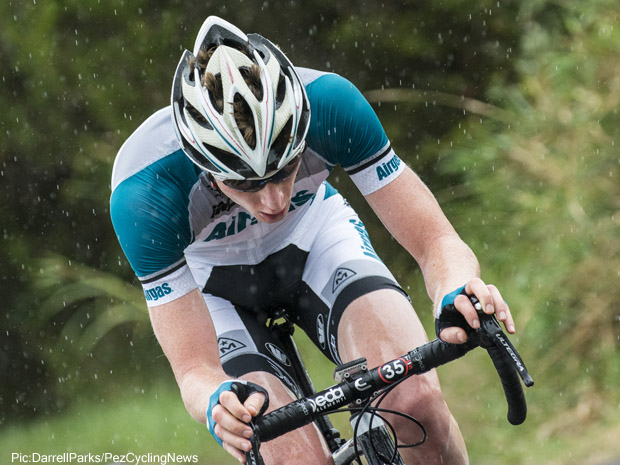 The Final time up the KOM finds Jessie Anthony climbing to the front of the break. Once over the top the escapees are all back together and working to stay off the front. On the last climb of the final circuit Team SmartStop rider Zach Bell decides it’s time to go and puts in a huge effort. No one is able to follow and suddenly he’s off the front on his own. 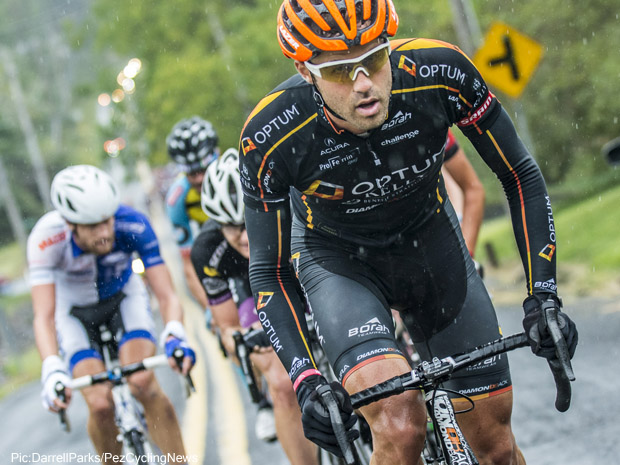 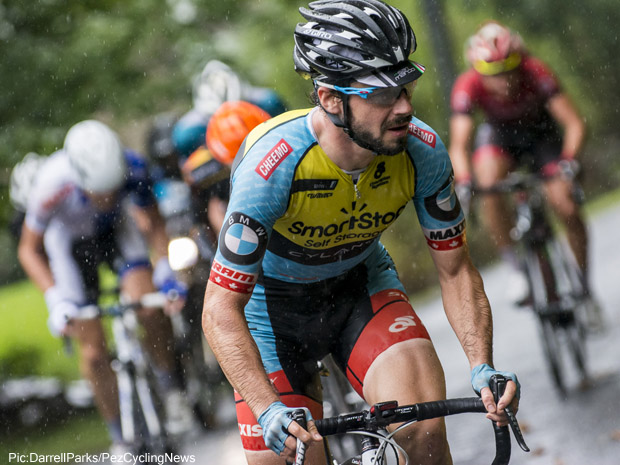 Bell is now in beast mode as he continues to put time into the break. Now out of the circuits and heading for the home stretch along the Delaware River he’s in full gas TT effort. He makes the turn onto the final climb and immediately reveals his pain face! He gives me a quick grimacing glance as I record the moment and head off towards the finish. 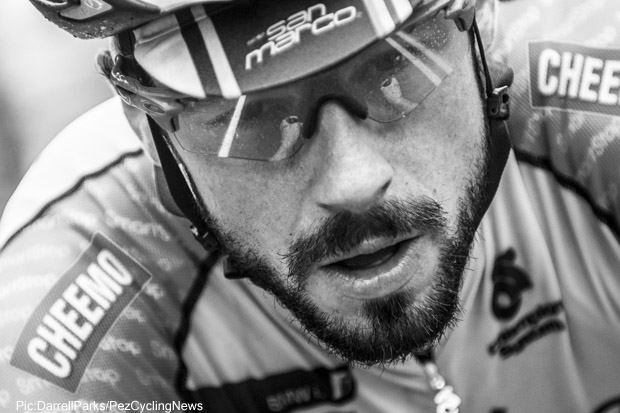 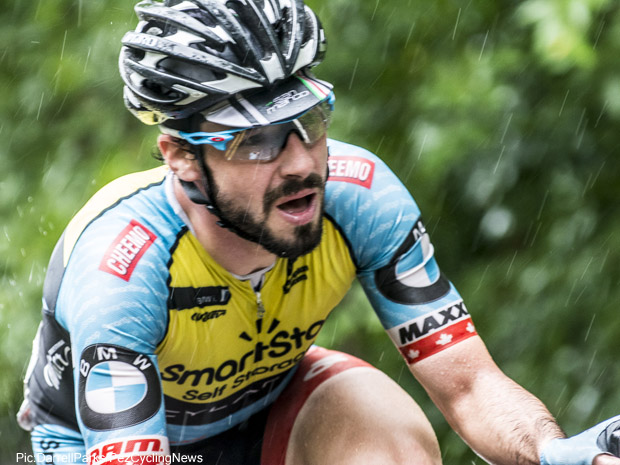 Making the solo turn onto the final climb of the day 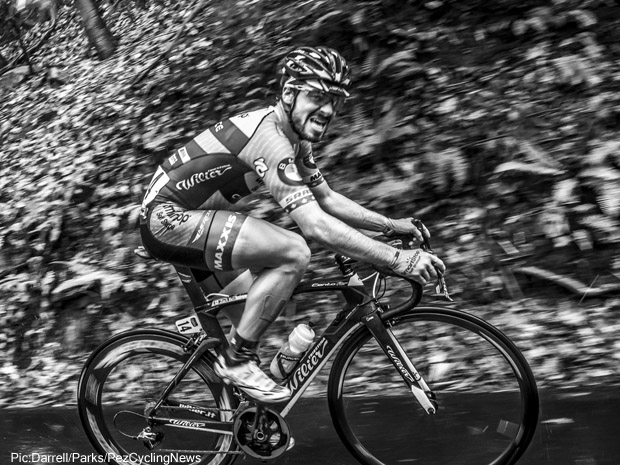 At the finish my cameras are so thoroughly soaked that the flash on one of them is popping all by itself! I decide it’s time to turn things off and find something dry to wipe them down with as all my towels are now sopping wet. Zach is able to hold off the chasers and solos to victory in the rain. Another victory for SmartStop in what can certainly be defined as a break out year for the team. It’s now time for me to get out of the weather and hope my gear dries out and stays functional before tomorrow’s Crit in Doylestown! 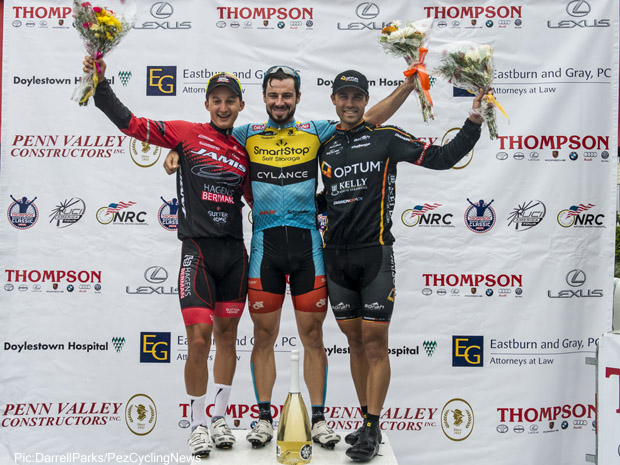