Colorado Classic’17: Stage 3 of the Colorado Classic was tough day for the riders, with a big attack from BMC’s Manuel Senni splitting the race to pieces. Serghei Tvetcov managed to go with the Italian and win the stage, but the overall jersey went to Senni. Photographer Darrell Parks was there to capture the action for PEZ. 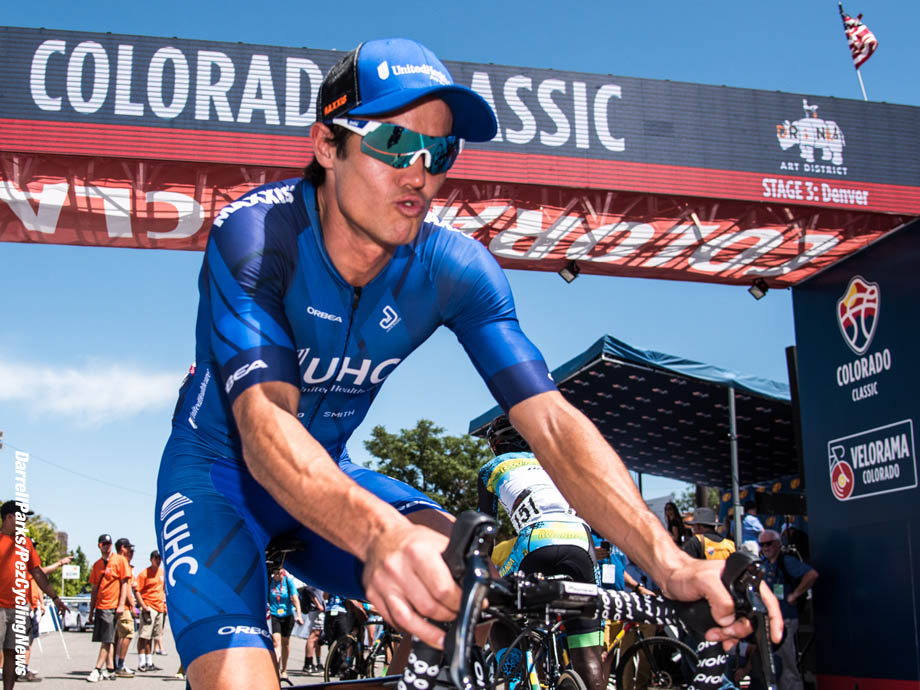 Here is how the BMC team saw the race: After a strong display on stage 2, Manuel Senni (BMC) has backed up with an impressive ride on stage 3 which saw him sprint to second on the finish line and move into the race lead with one stage remaining. After two days of circuit racing, stage 3 of the Colorado Classic took the peloton on an out and back route which included the tough Gap Road climb, followed by the second King of the Mountain at Golden Gate, before the downhill run into the finish in Denver. 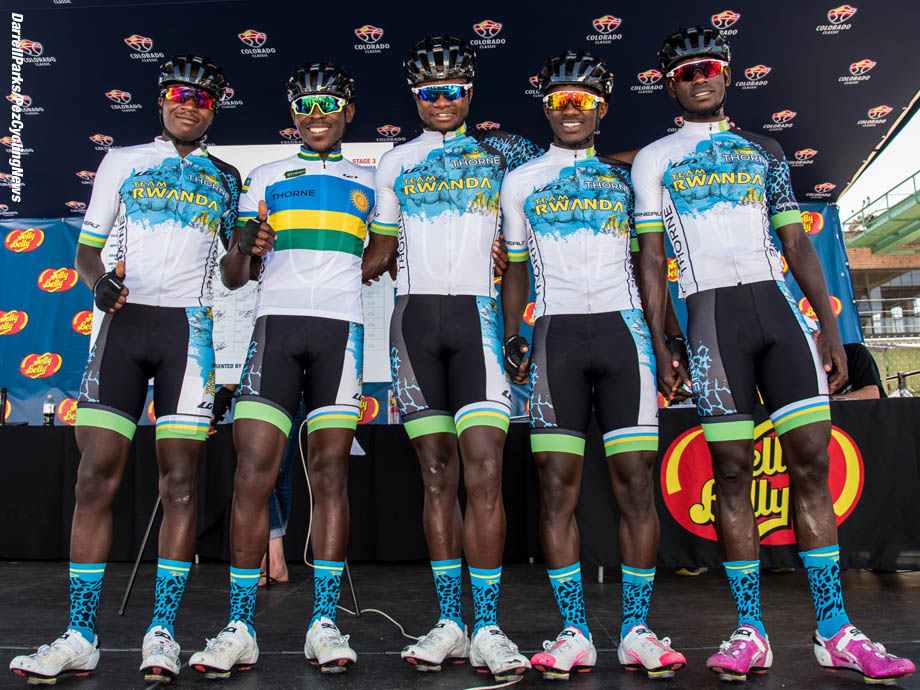 With the first intermediate sprint coming in the opening 10km, it was a fast pace from kilometer 0 and a battle to make the breakaway. Multiple riders tried to go clear on the run into the Gap Road climb but it wasn’t until the road started to rise when a five-rider breakaway was established, while behind Senni and Brent Bookwalter were part of a select chase group. 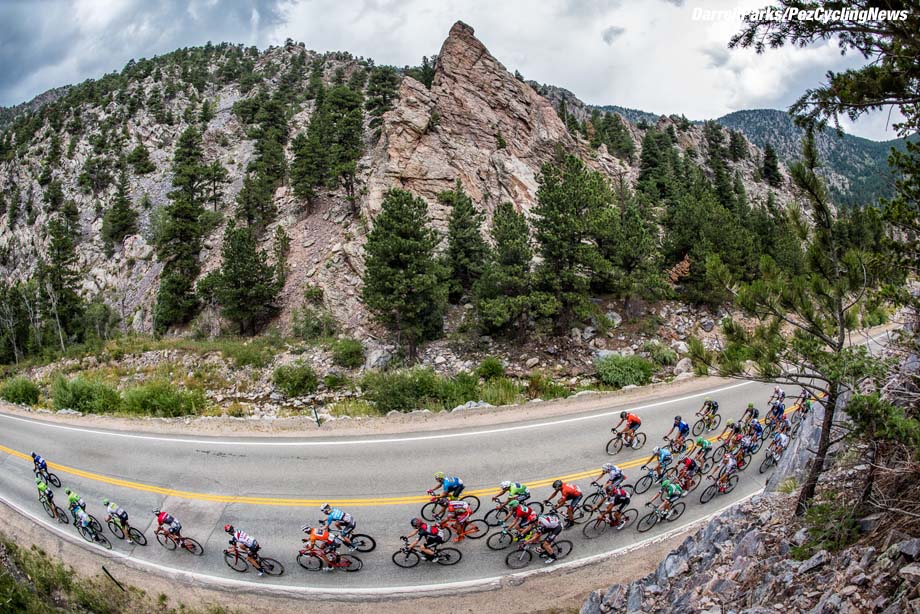 The peloton start the first KOM

The chase group kept the breakaway to within one minute, before Senni jumped ahead and bridged to the five riders who, at that point, held a slim 20-second advantage. 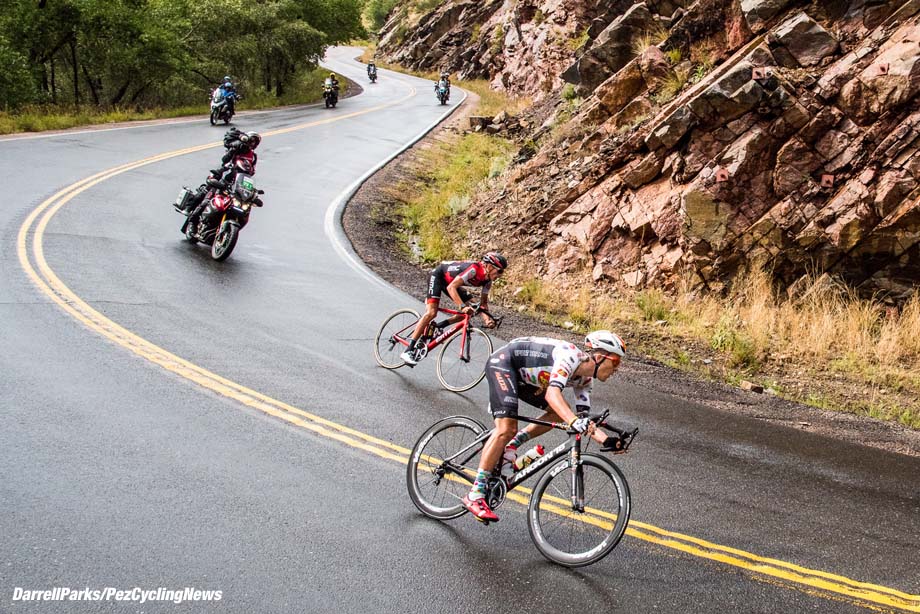 Tvetkov and Senni on the descent of the second KOM

The 21-rider chase group, featuring Bookwalter, closed the gap and the race hit the reset button before Senni launched a solo attack 5km before the Golden Gate summit. Serghei Tvetcov (Jelly Belly Powered by Maxxis) covered Senni’s move and the two riders forged on ahead, managing to gain a maximum 1:15 advantage over the 22-rider chase group. 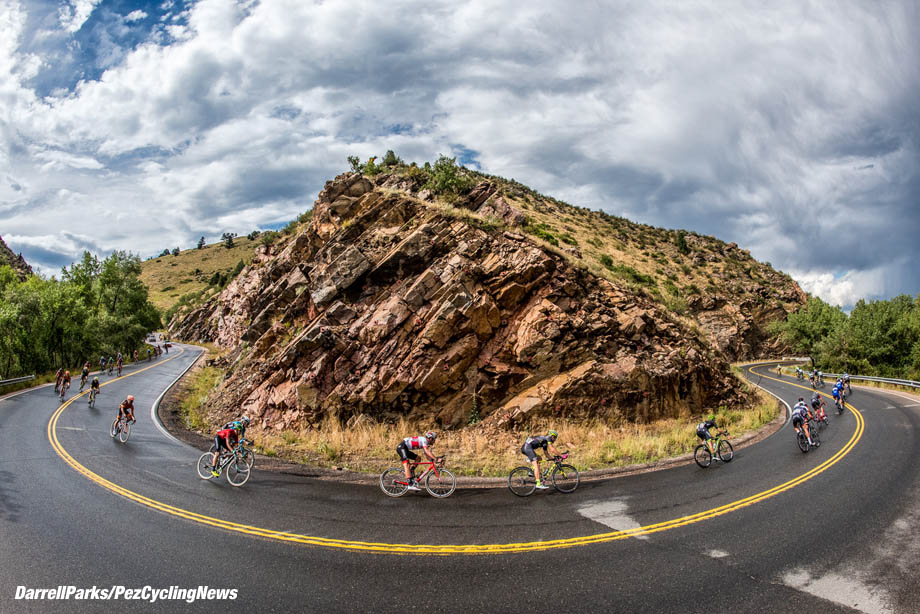 Despite the strong numbers in the chase, Senni and Tvetcov managed to maintain a gap of more than one minute for the final 30km of the stage. 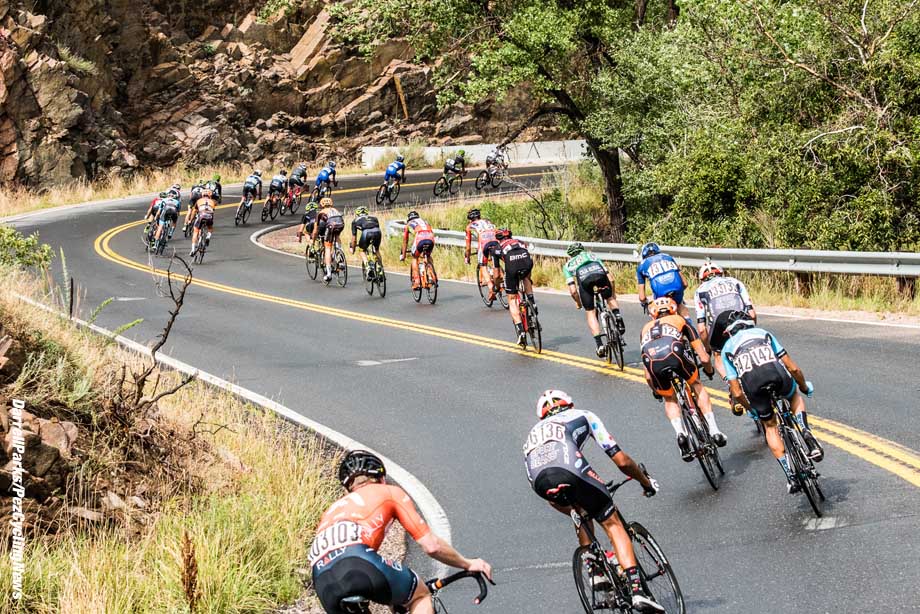 The peloton on the descent of the second KOM

Senni claimed the final intermediate sprint points ahead of Tvetcov before the duo started the run into the finish, which saw Tvetcov power ahead of Senni in the closing meters to finish one-second ahead. 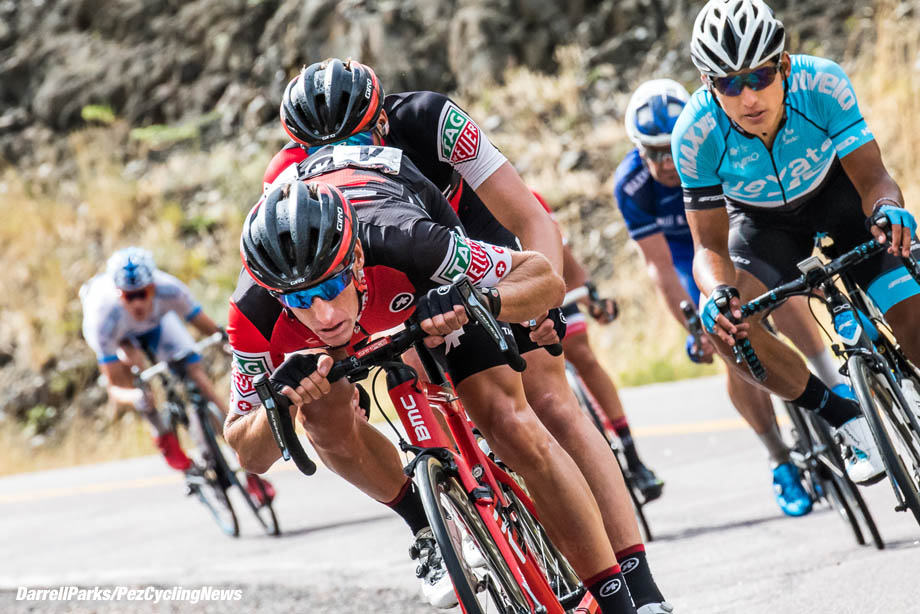 The stragglers on the second KOM

Bookwalter led the chase group behind and crossed the line in sixth place to move into seventh place on the General Classification, 2:16 behind new race leader Senni. 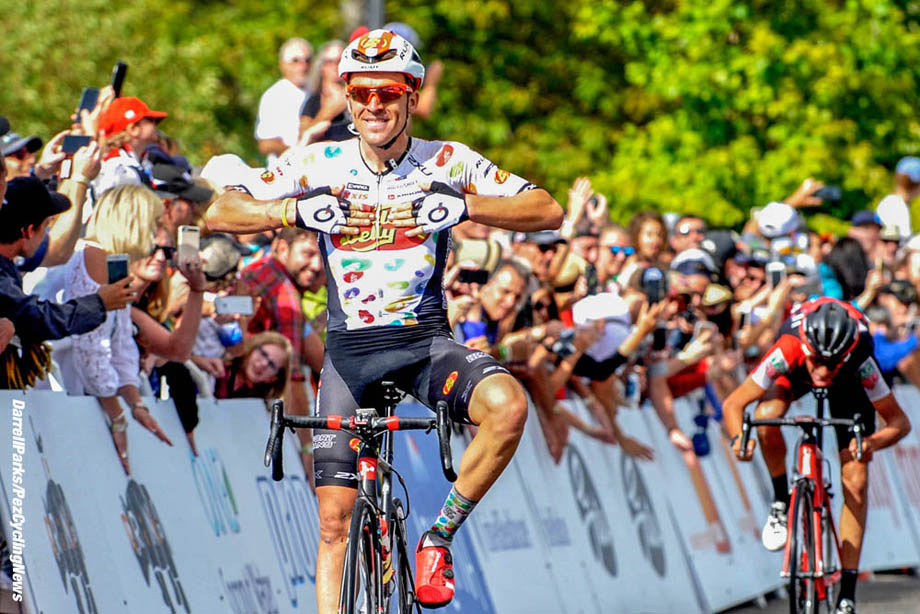 With one final circuit stage to come, Senni holds a 15-second advantage over Tvetcov. 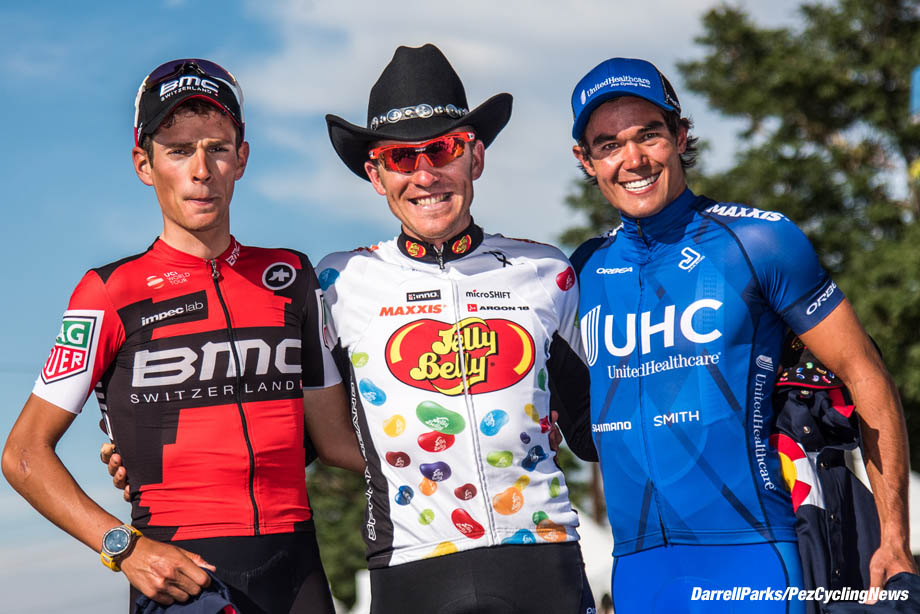 New overall race leader, Manuel Senni (BMC) summed up the stage: “Today was exactly how I said it yesterday. I wanted to try everything because my legs are good and I was in a good position on the General Classification after yesterday. I tried to follow Peter Stetina on the first climb but the pace was a bit too much for me and I didn’t want to go over my limit so I came back to the group. I could see that the group was getting smaller and smaller and towards the top, my legs were getting better. I attacked in last part of the second climb and Serghei Tvetcov followed. Together, we were really strong on the flat and on the descent so we were able to hold our advantage and went together to the finish. We had good cooperation the whole time so it was a really good stage for me.”

“Going into tomorrow, I have a 15-second advantage. We have a very strong team and I think we can try to cooperate with some other teams. But, I think we have a good team to defend the jersey. I started the year with good results in Valencia and good results with the national team. I had bad luck at the Giro d’Italia as I started with a virus but after I did a month of good training at home before Utah where my legs were good and I was getting better day by day. Now I am here in the position to do a good result and I think until now, this is the best race of my career.” 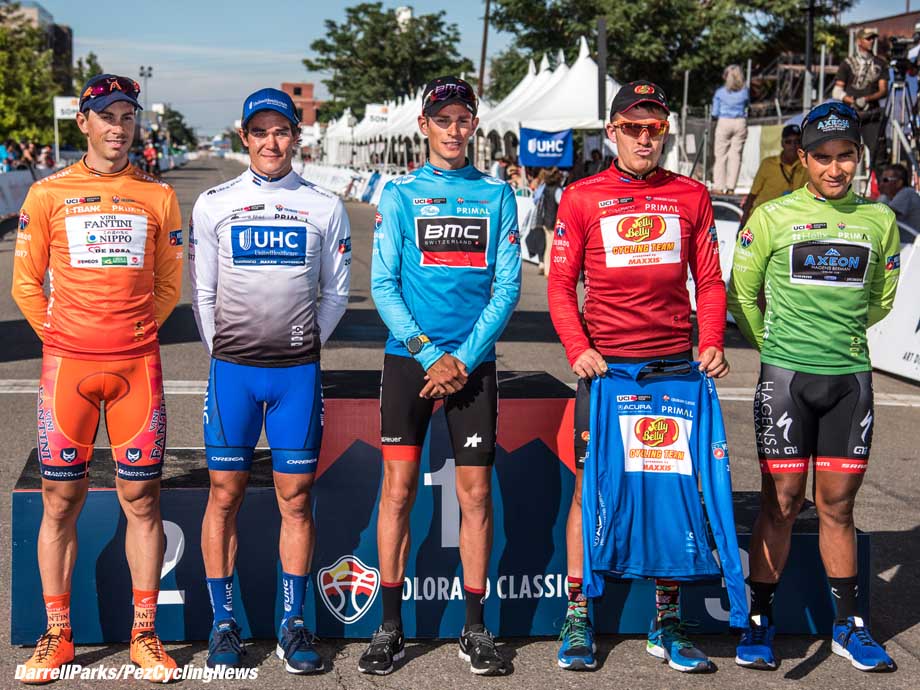 4th on the stage and ‘Most Aggressive’ rider, Marco Canola (Nippo-Vini Fantini) had this to say after the stage: “I felt really good, for that reason I joined the leaders on the first climb and I won the KOM. The front of the race went really fast and me with Ivan Santaromita did our best to close the gap. At the second clip the Senni and Tvetcov attack was decisive.” The #OrangeBlue rider is confident for next races: “I’ll do my best on tomorrow’s final stage to achieve important result. I’m sure that this American tour give me the physical condition to get results in the final part of the season.”

# You can see more of Darrell Parks’ work at his web-site HERE. #