The final three days of the Copenhagen ‘6 Day’ saw a home win for the Danish, a happy crowd and a tired Ed Hood in the bowels of the Ballerup Super Arena. Tempers frayed to the point of hand guns being perused on the internet. Ed’s Danish big finalé: 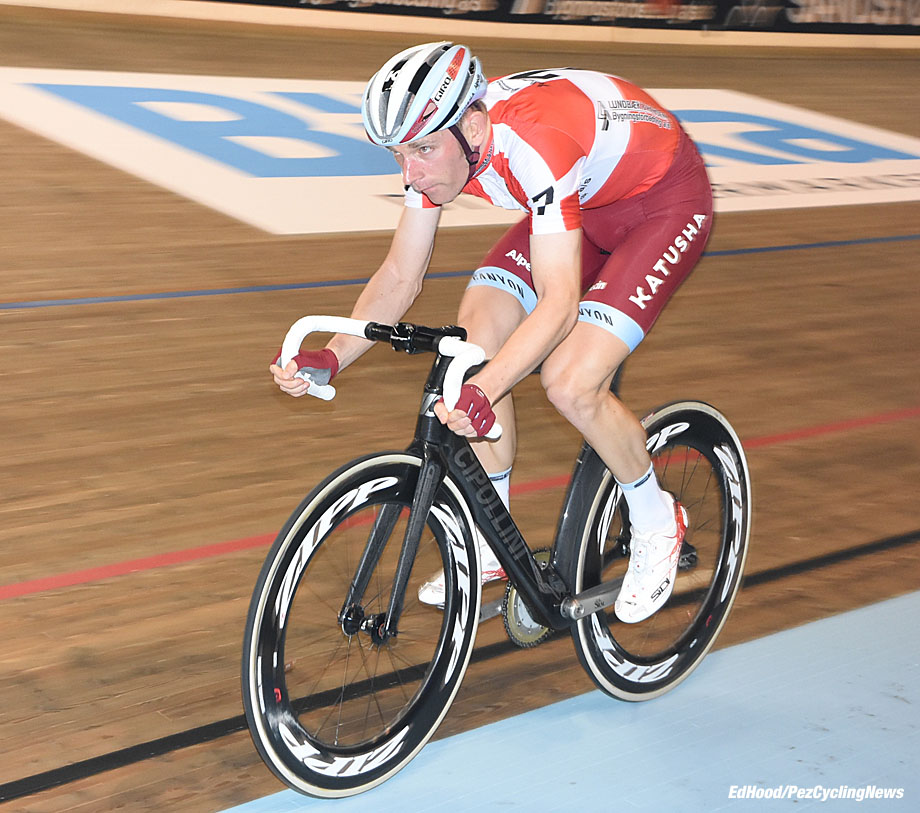 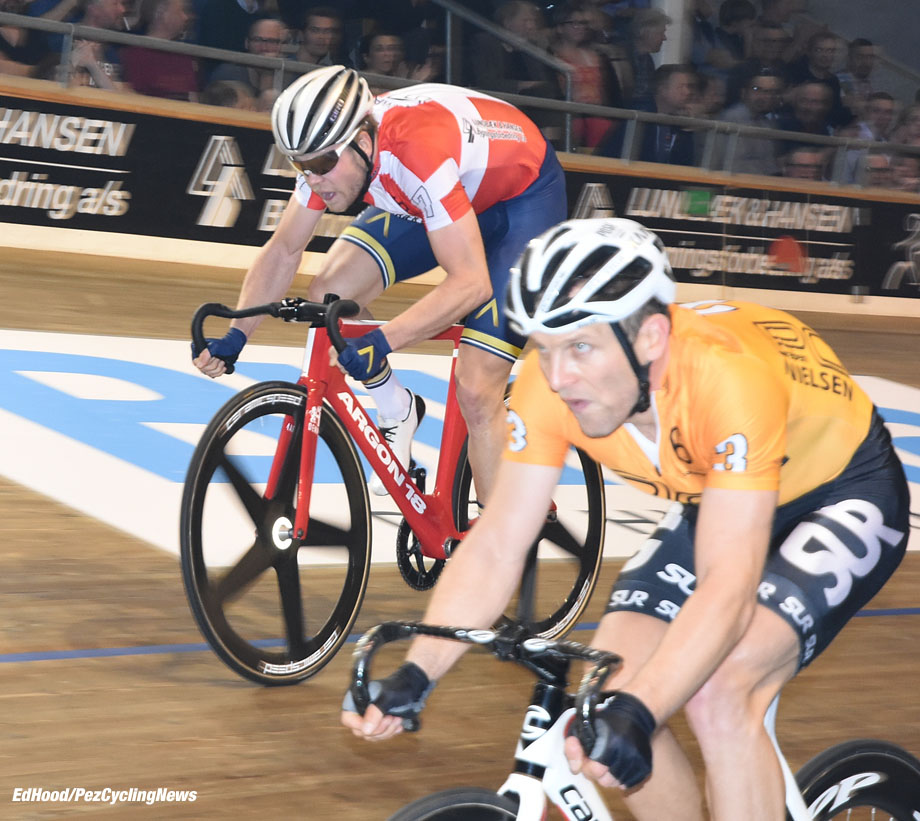 Norman – multiple Danish, European, World and Olympic track medallist who was Olympic Omnium Champion in London and would probably have won it again in Rio had he not made a novice’s mistake in the elimination and gone out right at the start. Right at the start I asked the question; ‘who can beat them ?’

The answer was simple; ‘no one!’ 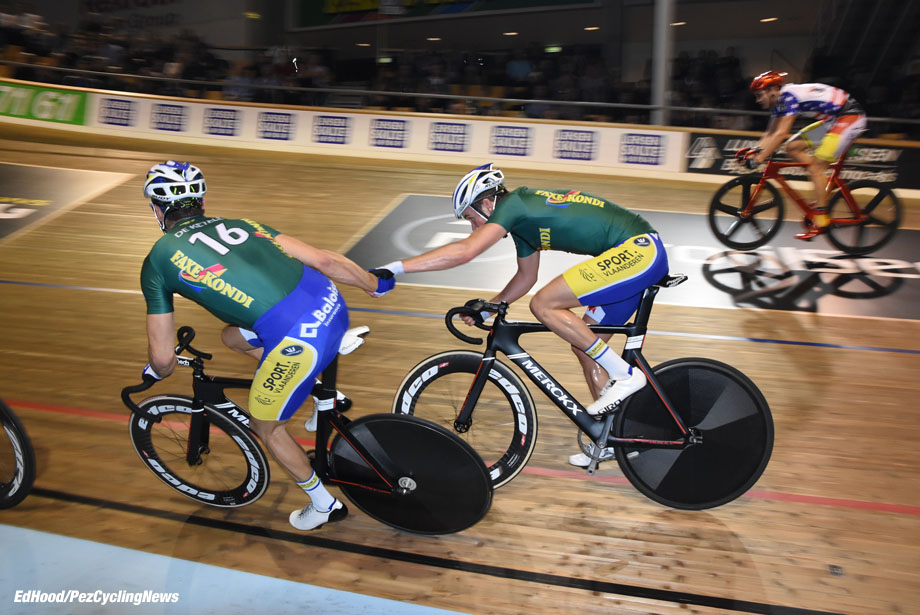 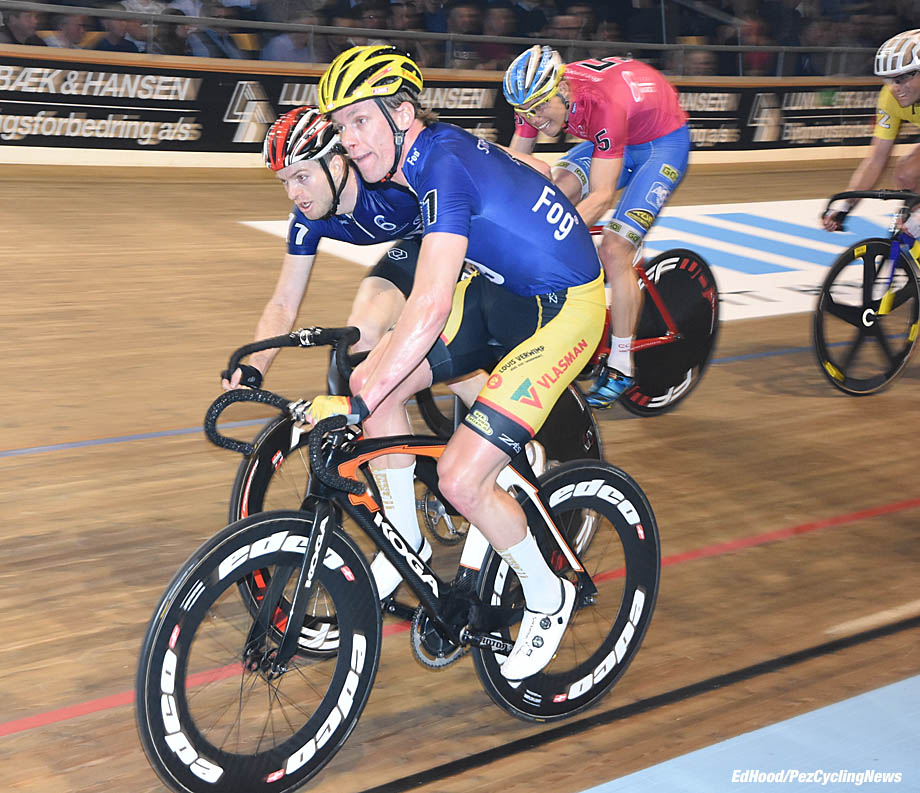 The Danes relegated Belgian winners in London and Amsterdam, Kenny de Ketele and Moreno de Pauw to second spot and Dutch winners in Berlin, Yoeri Havik and Wim Stroetinga to third. The final chase wasn’t a classic, the Danes were way too strong to be challenged but it was an emotional night of sport; not least because Mørkøv’s former ‘madison twin’ with whom he won that world title and some of the biggest six days on the circuit, Alex Rasmussen signed off his glittering track career. . .

The ‘Balustrade’ sprint where, to the strains of Dario Gee’s ‘Sunchyme’ the riders track the fence, zoom up and down the bankings hands high or in the ‘Superman’ position as the crowd claps along – the music stops and there’s a mad charge for the line.

The man doing the charging this time was that Danish track Legend, Alex Rasmussen – twice World Scratch Race Champion, World Team Pursuit Champion and World Madison Champion not to mention Olympic silver in the team pursuit – he took a huge gap, aided by a hand sling from his former compadre, Michael Mørkøv as he ‘lapped’ the Katusha man and then rode out of the last banking with his feet out of the pedals. 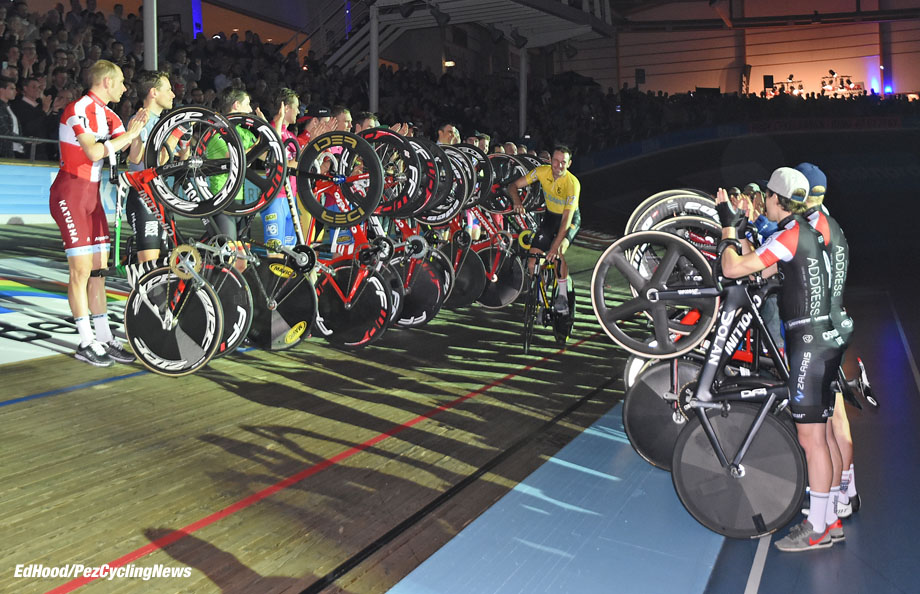 The crowd was on its feet and I thought back to that time a decade and more ago when Alex rode his first six down in Grenoble with Marco Villa his team mate and Kris and I as his soigneur and runner – the circle complete, we were with him when he started and when he ended. Since then he’s won six days in Berlin, Bremen, Copenhagen, Gent and Grenoble. We’ll miss that smile, that sense of humor and those piles of clothing and ‘stuff’ that always appeared around him. Best get back to Sunday, Day Four, before I get emotional. . . 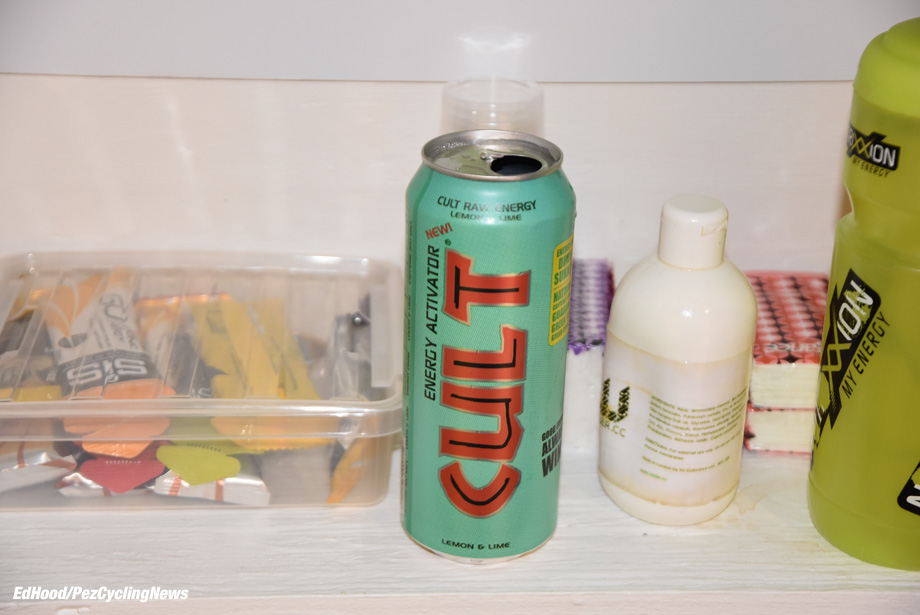 I know where he’s coming from, I’m not supposed to consume energy drinks at my age but I’m running on the local rocket fuel – ‘CULT energy.’ 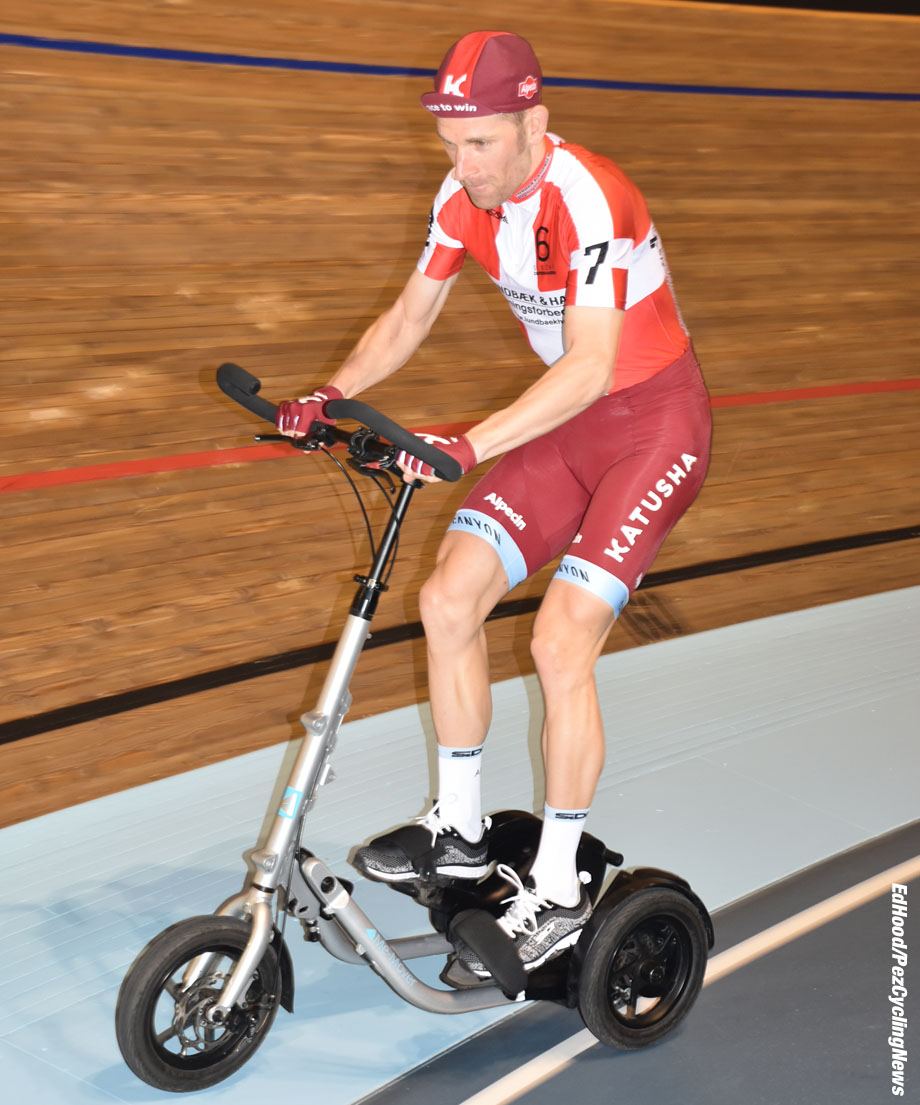 Hans is back – and we have a sprint series to kick off then one for the kids where M. Mørkøv/Lasse Norman race against J. Mørkøv/Marc Hester on the funny ‘walker’ bikes – I’m not sure who won (work to do) but last time they passed, Michael was well ahead. It’s kinda blurry after that, I lost my notes for the day due to battle fatigue and I’m writing this from memory, using my pictures as an aide memoire. 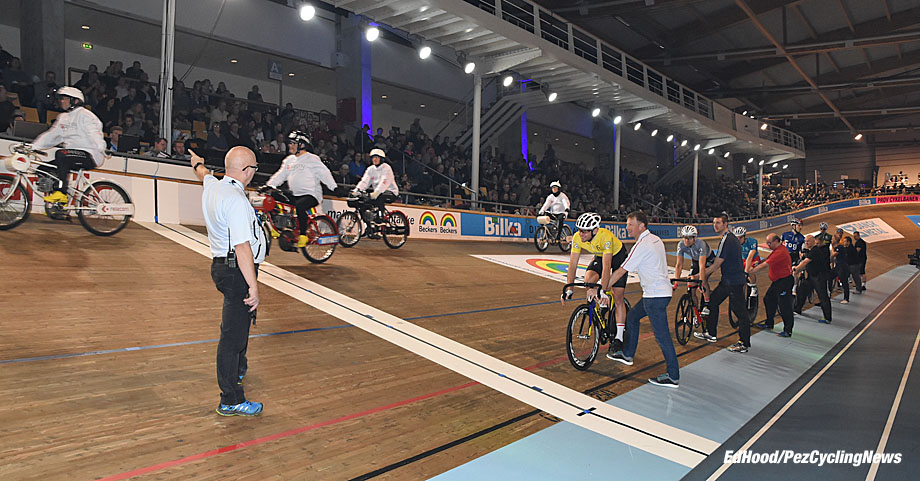 We had a couple of Dernys, the ‘longest lap’ and them quick Danska Boys broke the lap record again before the balustrade and the best chase you can expect from a sleep deprived peloton on a Sunday afternoon. 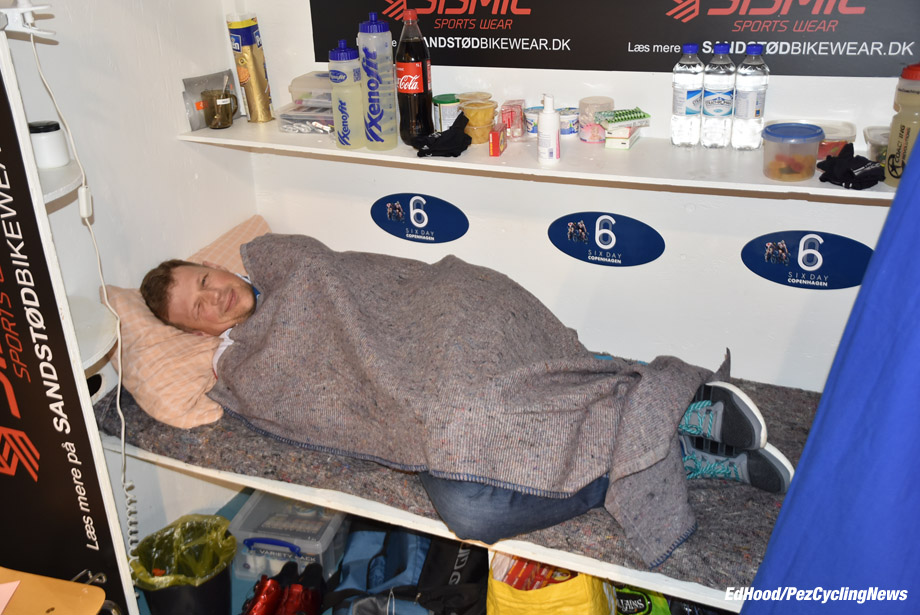 Day Five:
It’s a cult race, the Monday Night Handicap Madison in the Copenhagen Six Day, 75 kilometers, 300 laps with the ‘Bigs’ giving away up to seven laps on the lesser teams – and not just for this chase, for the overall standing too. 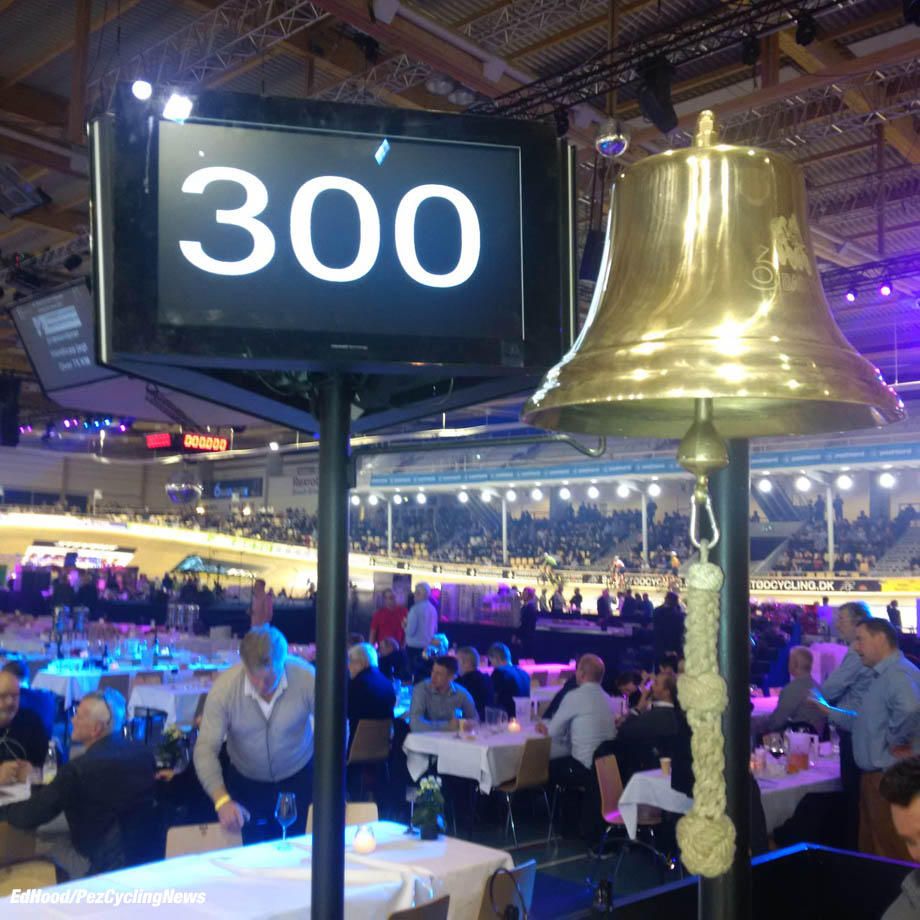 My two big 75K handicap memories are – 2010 when the US pair of Colby Pearce and Daniel Holloway looked to have it won when in the closing stages, Danny Stam (The Netherlands), paired with countryman, Peter Schep, said to Colby; ‘we win!’

The Americans, minnows in the pool, were afraid to cross Danny, one of the big fish in the ‘six pool’ and laid down to him – so the record book says Stam/Schep but if you know the score, it should read Pearce/Holloway. I could never understand that one – in the overall sphere of Danny’s career it meant little but to the Americans it would have been a red letter day. The other one is a year or two ago when we were looking after US riders Guy East and Zak Kovalcik; Guy had great legs and we were leading deep into the chase. Zak’s ability to hurt himself unfortunately didn’t match his fitness and he cracked big time – it took Kris a long time to massage the cramps out of his legs after that one. 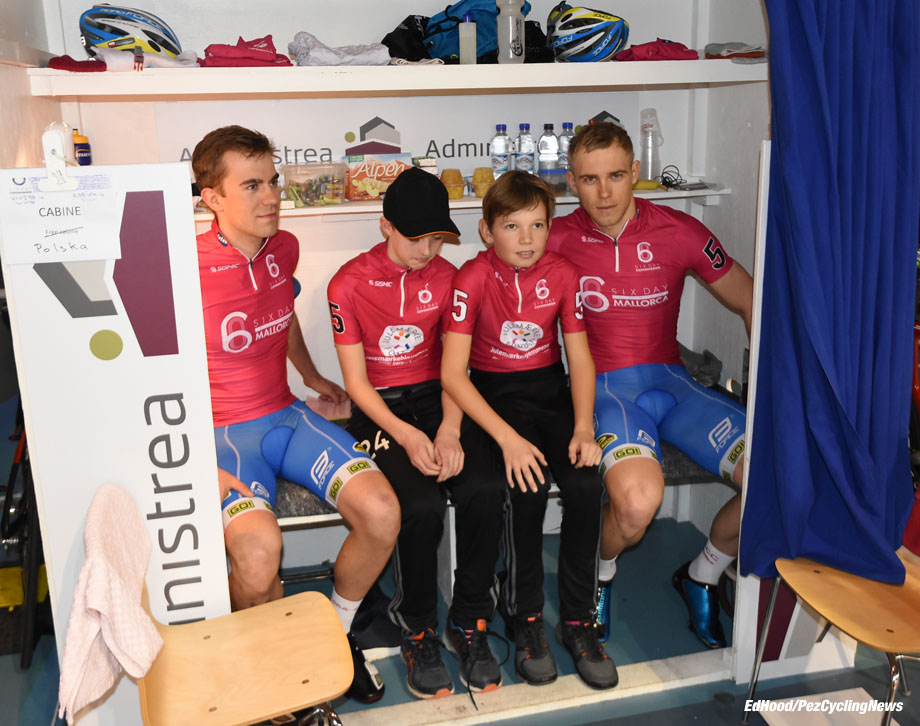 This time our Poles were leading deep into the chase but Folsach/Rodenberg hopped aboard the Mørkøv/Norman Express on a lap gain, went level on laps and from then on there was only going to be one winner. 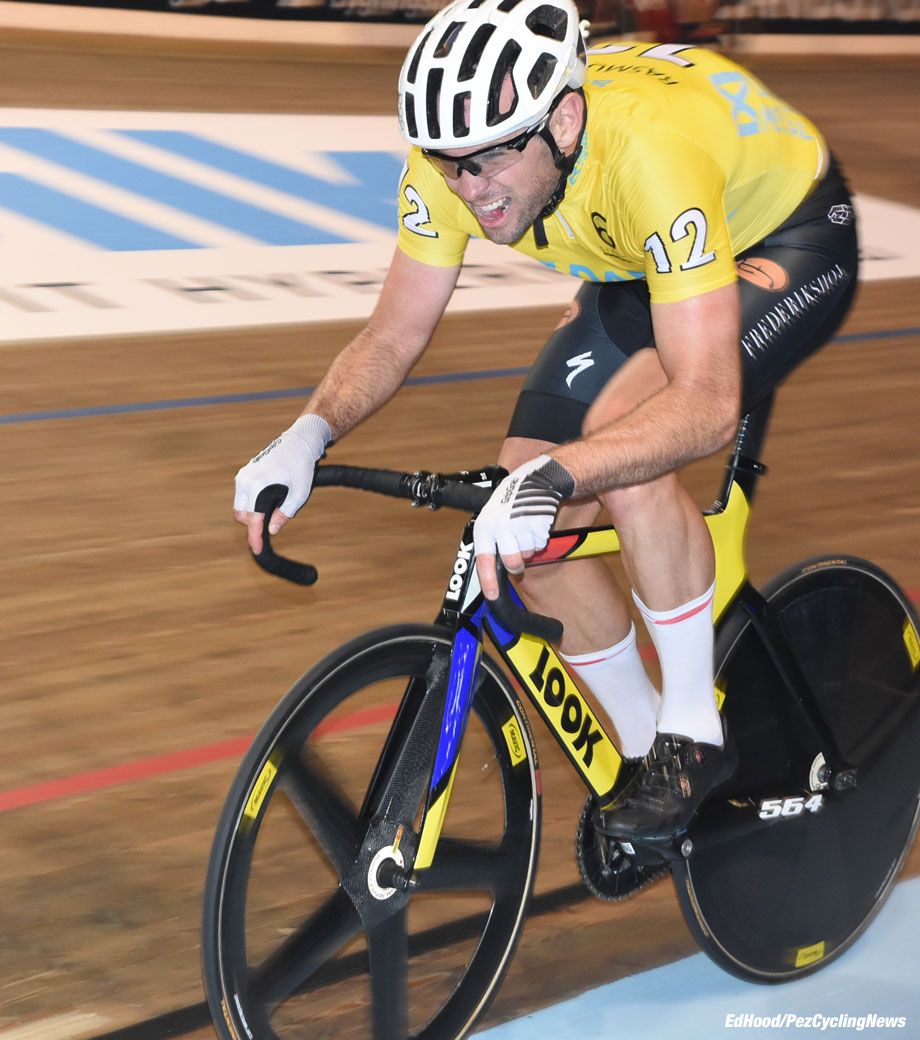 Albeit Alex had our pulses racing with a strong late lap gain – but then lost one almost immediately after; Folsach and Rodenberg the win. 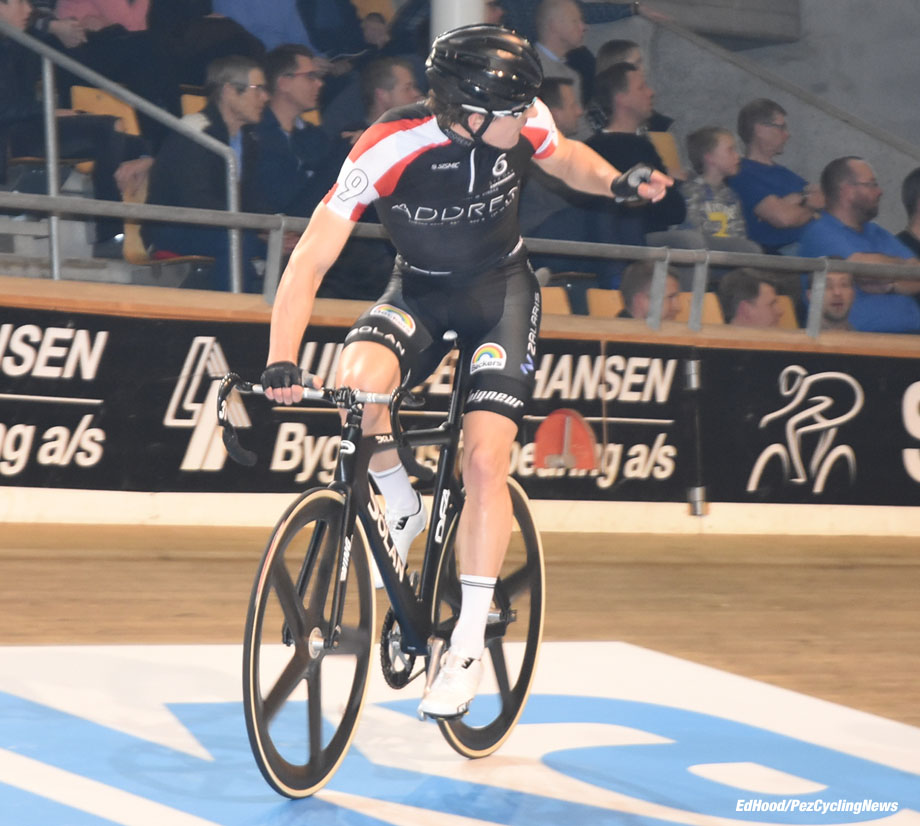 But not before Marc Hester had a ‘hand bags at dawn’ moment with the winners before the end – Hester, as half of the ‘Par # 9’ all Danish team with Michael’s brother, Jesper didn’t enjoy the best of nights. . .

And another ‘what might have been’ story joins my portfolio. It wasn’t a bad old night for the cabin prior to that, Seb won one of the sprints with Alcazar’s ‘Crying at the Discoteque’ the perfect sound track and Nico won the ‘longest lap.’ 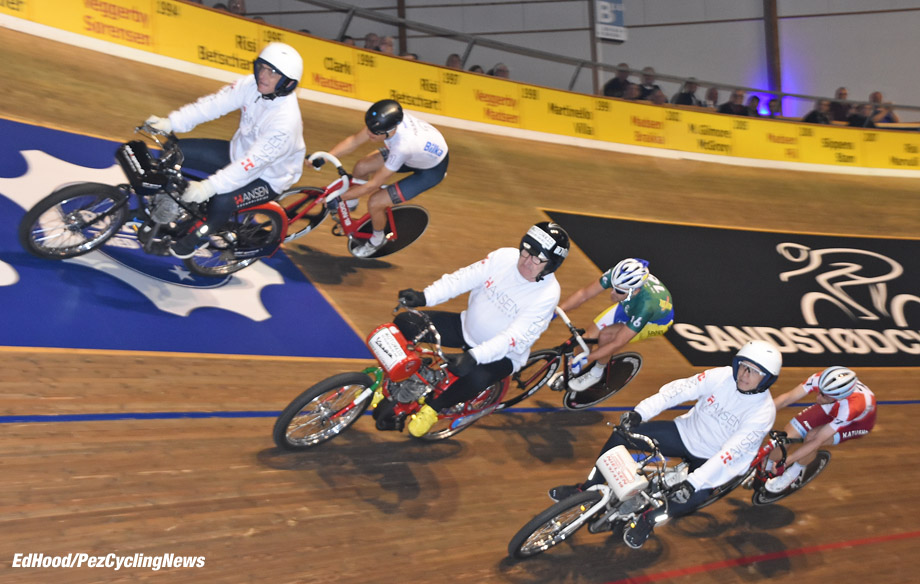 Folsach won the flying lap in 12.6 and the Derny – three abreast motors looks great for the crowd. The band looked to have a new lead singer tonight; the Suzi Q number was dumped for Shakey Stevens ‘You Drive Me Crazy’ – how appropriate. 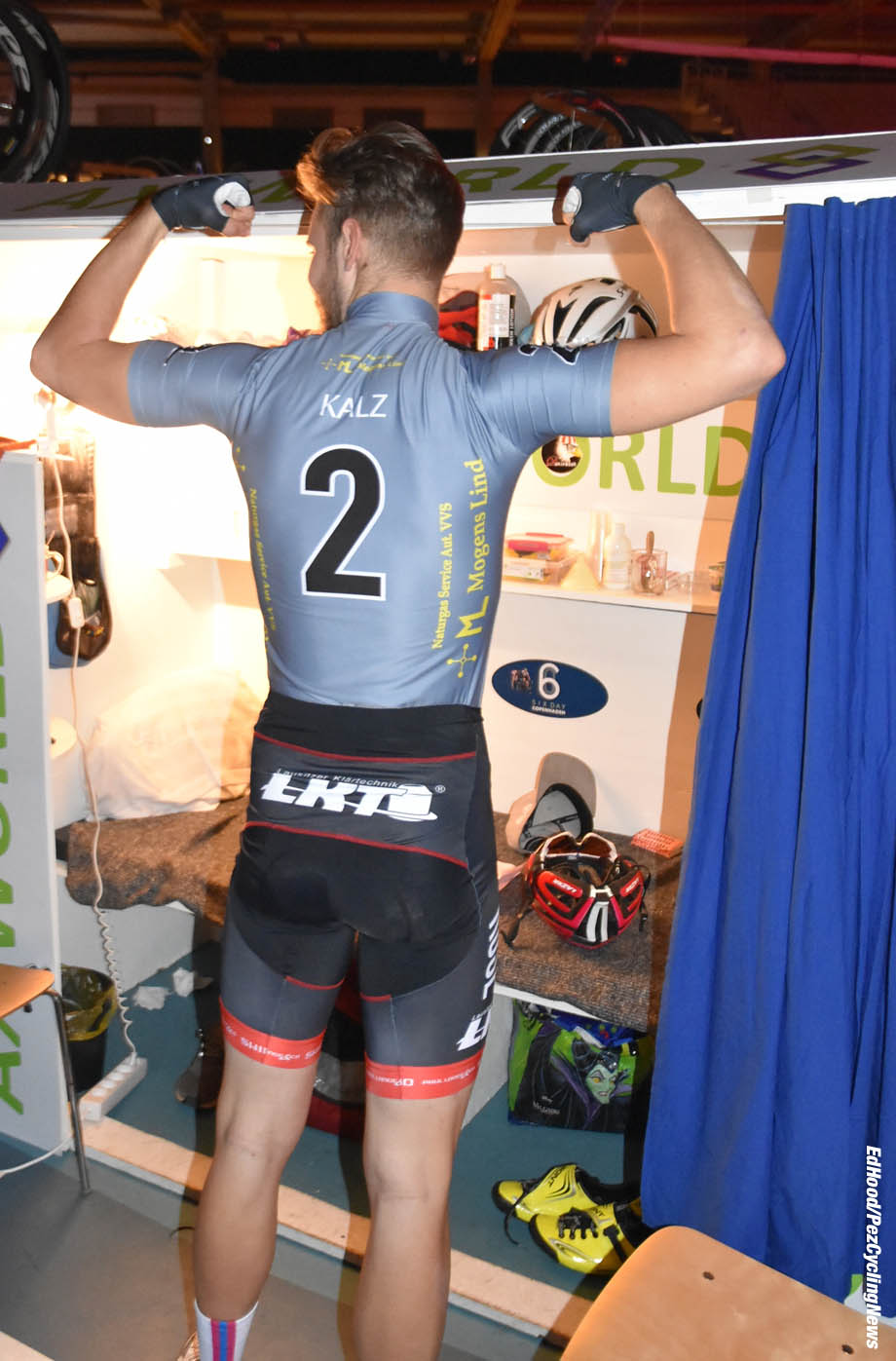 Beyer is out but Lampater as one of the men on a big contract has to have a partner; so ‘ciao’ Hans and Seb now wears a grey jersey – it must be an unlucky tricot, it was originally meant for Kalz, never mind Beyer. Hans was really disappointed to miss the 75K chase – you could tell be the way he skipped down the stairs to the cabin. I couldn’t help but notice that Jorg, the German mechanic was surfing his tablet the other day – looking at images of hand guns which would do Harry Callahan proud. I had a quick look tonight; camouflage combat gear – I know who’s cabin I’ll be looking for if things get sticky. The chase finished before midnight and it was the last washing tonight – happy days.

Day six:
A typical Copenhagen sky greets us; grey, heavy, pushing down on you with unseen force – perhaps Zeus had been visiting Copenhagen when he sentence Atlas to hold up the sky? Sprints, Lasse Norman wins two straight off, bang, bang – just so everyone realize who’s in charge. There’s a 30 minute chase but it’s never going to be savage with a finale to come – the Belgians win. 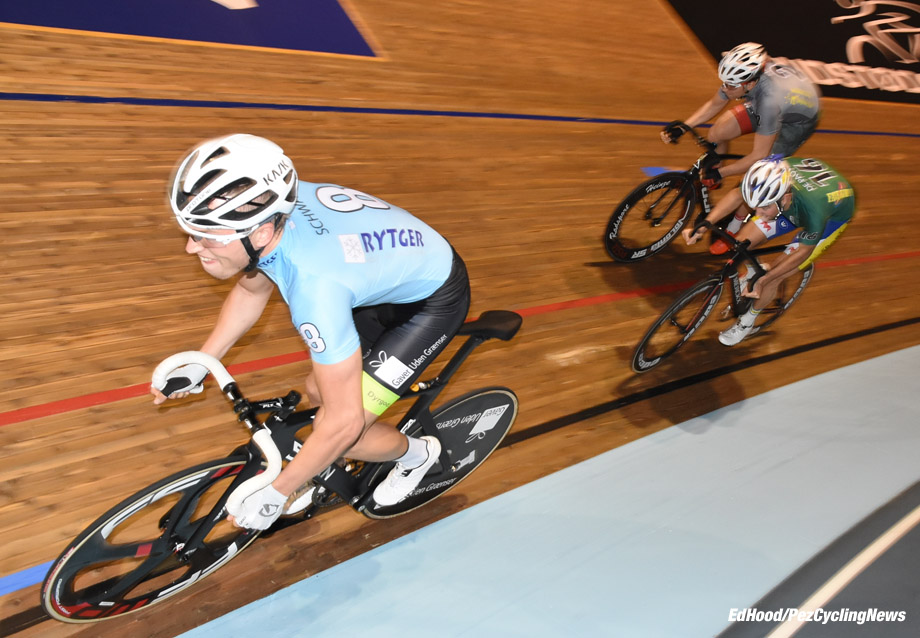 Longest lap, Beyer is back with Lampater and he wins. Michael Mørkøv wins the devil – more points. Two teams go in the 500 TT but Folsach and Rodenberg have this tied up overall with their track record. 21:45 ‘TIME TO SAY GOODBYE’ says the program, a presentation for Alex; a photographer pokes me in the back as I crouch down to get a picture – I’m in his way. 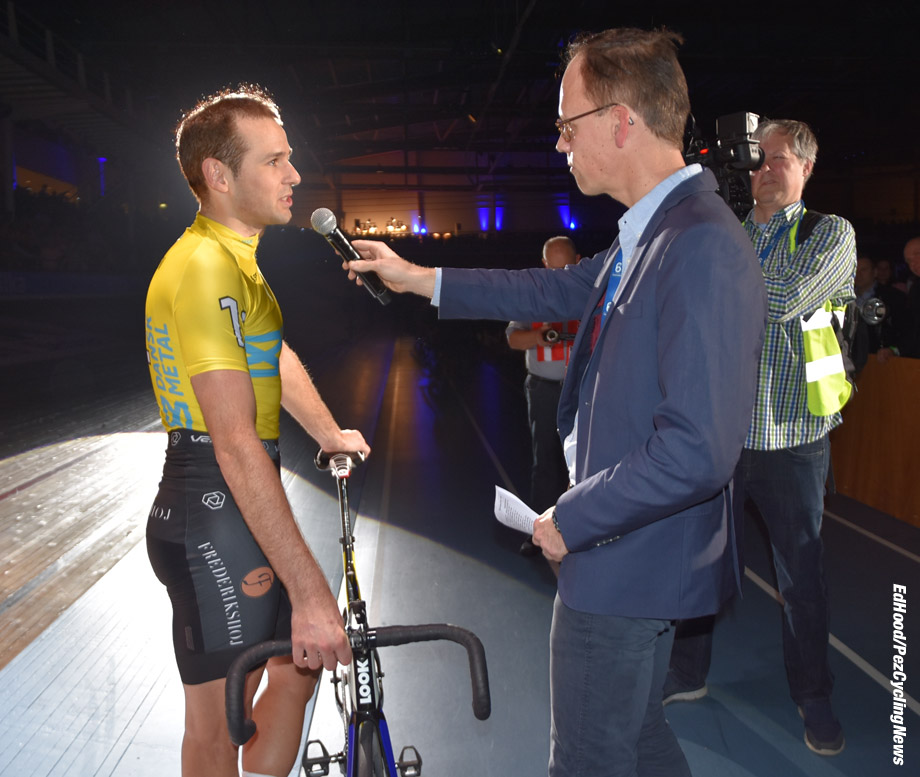 I don’t have the Danish to say; ‘I don’t remember seeing you in Grenoble, 10 years ago, pal?’ But as the lowest form of human life in the six day I just quietly move aside. Johnny Wakelin’s ‘In Zaire’ pumps for the last time in 2017 as the Dernys drone into life – Folsach, again. With Rodenberg he wins the flying lap too – 12.6 seconds. 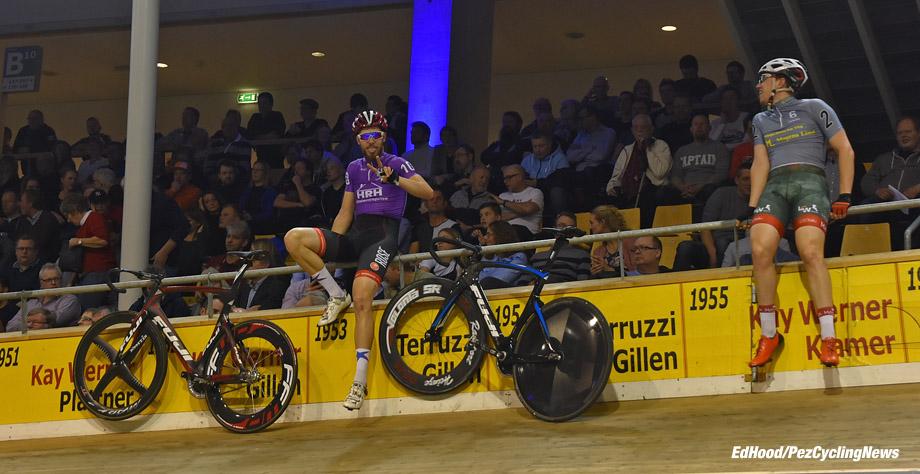 Then it’s time for the ‘Balustrade’ and I think that’s where we came in. Thank you, Kris, Martyn, Alex, Hans, Seb, Nico, Achim, Adrian, Wojtek – and of course, Wonderful, Wonderful Copenhagen.

See you at Het Nieuwsblad?