Ed Hood has moved on from the ‘lackluster’ Berlin ‘6 Day’ to Copenhagen and some hotter action, even if it’s cold outside. The atmosphere, music and racing is all part of the ‘6 Day’ fun and Ed captures the first three days in his idiosyncratic words and photos.

The cannon blasts, the PA thumps into life. The bongos are right up front on the production – Paul Delicato comes in; ‘Cara Mia why, must we say goodbye?’ with that honey smooth voice, whatever became of Paul? But I digress, the cannon report, smoke and the 1976 disco version of ‘Cara Mia’ mean only one thing – the 2017 Six Days of Copenhagen are under way with a 75 minute chase. 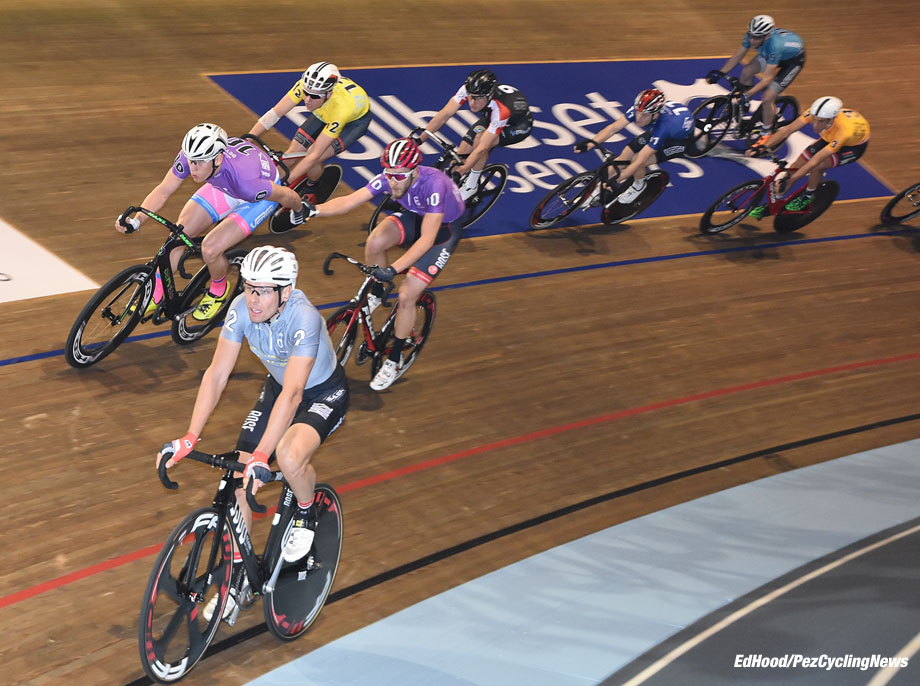 The Conti’s hum on the hardwood, the 1/8” pitch chains purr like cats, ‘Disco Inferno’ threatens us all with industrial deafness and by the end of the chase there have been more laps lost and gained in practically the whole of the Berlin Six Day. 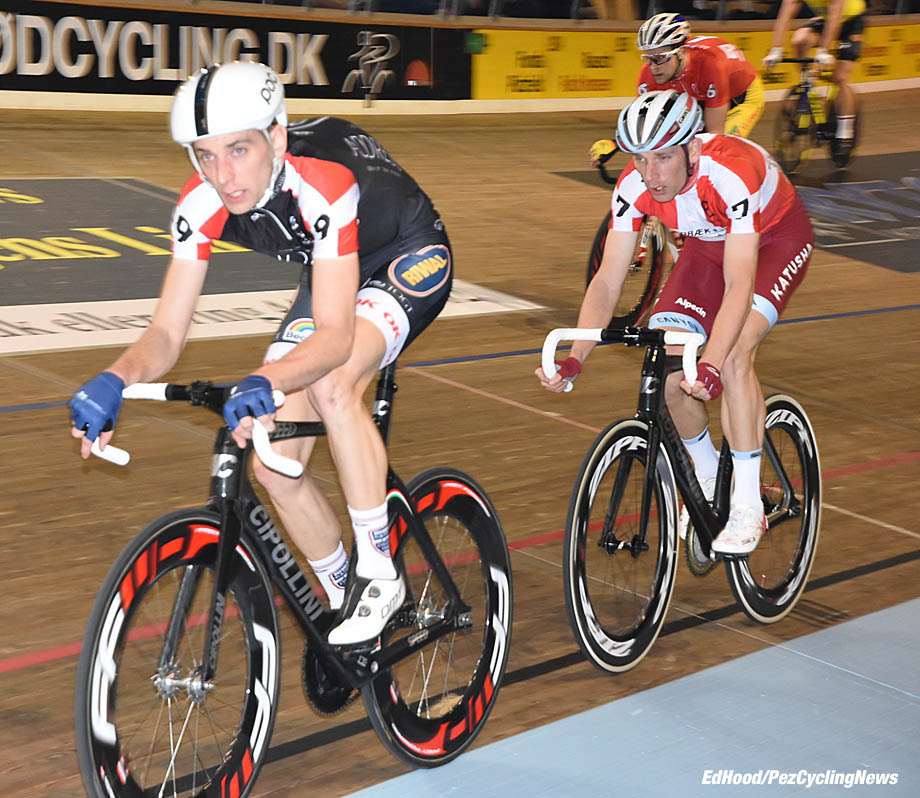 But there is a bit of a Danish Civil War going on up there on the boards as brother battles with brother.
Michael Mørkøv has won his home six day on five occasions; four times with Alex Rasmussen and once with Lasse Norman – who partners him again, this year. Little brother Jesper has one win to his credit, last year with aforementioned Mr. Rasmussen; this year he rides with another former Copenhagen Six Day winner – 2012 with Iljo Keisse – Marc Hester. 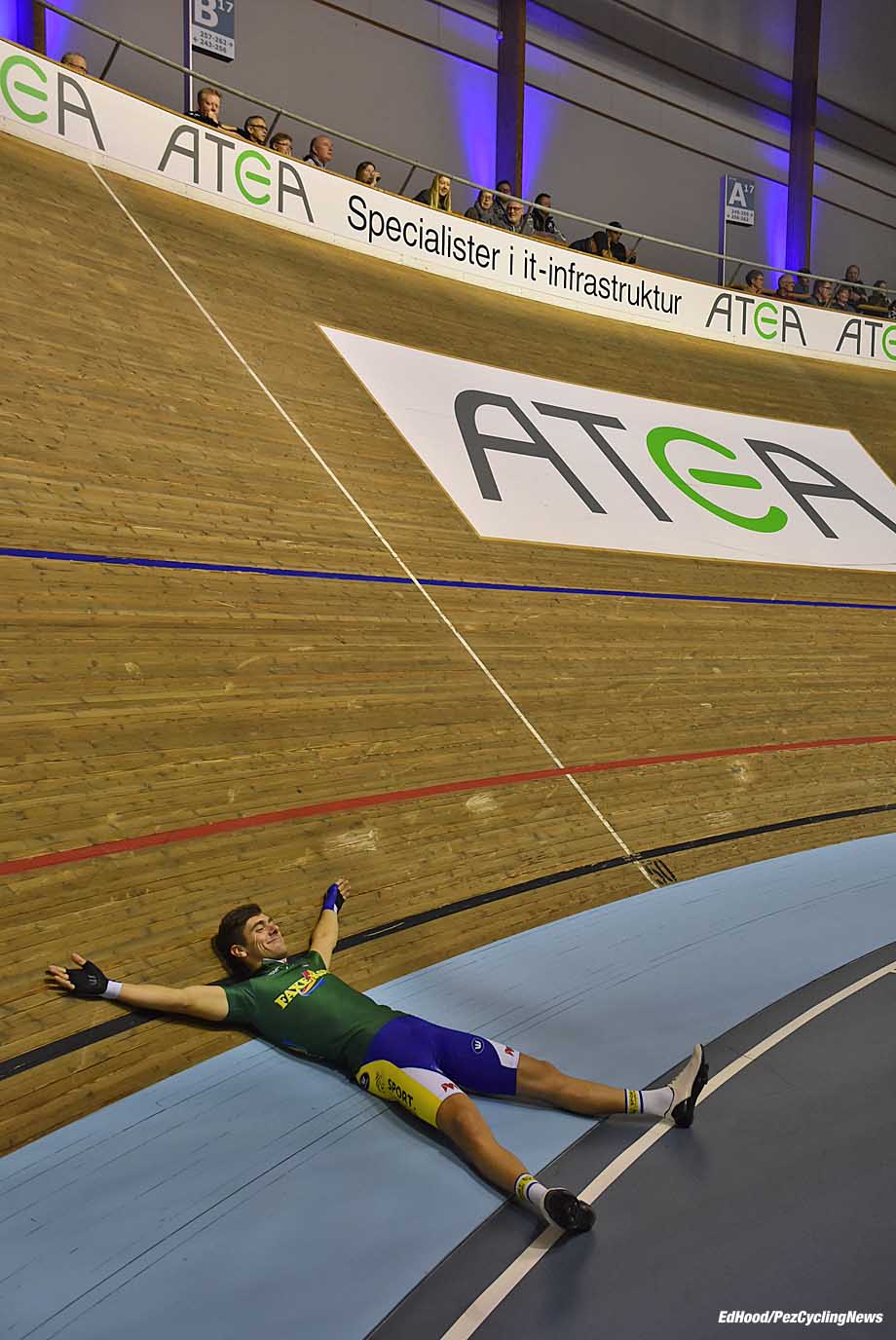 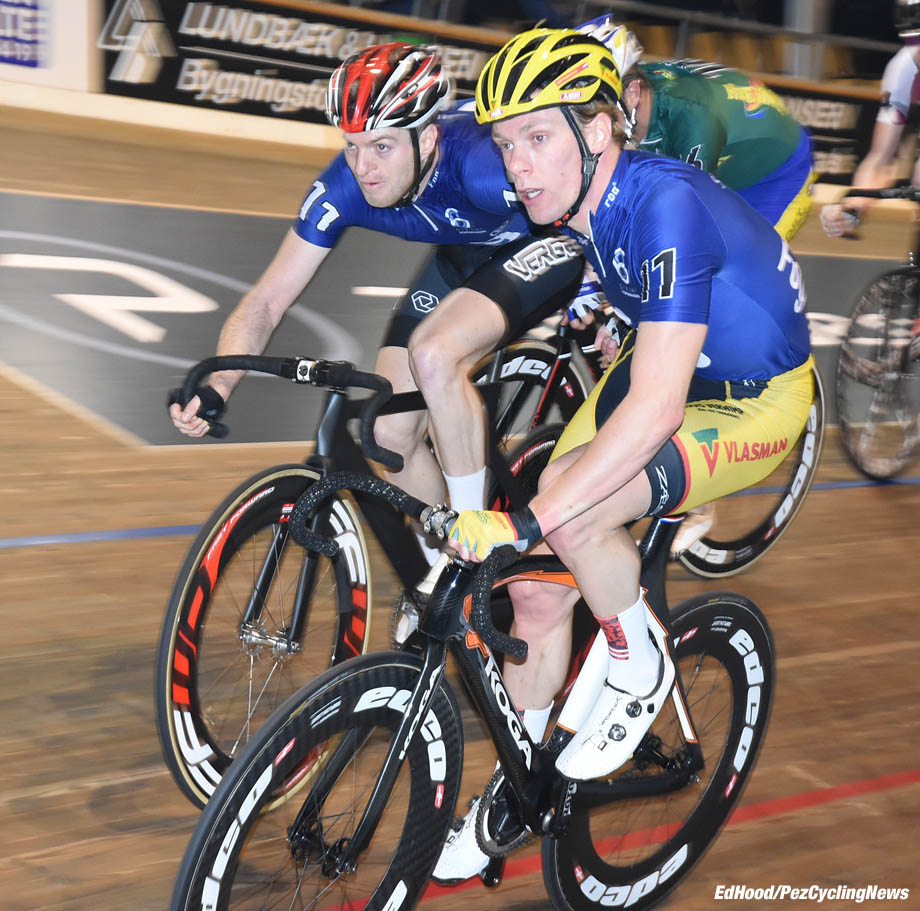 Trying to spoil the brothers’ dominance we have London and Amsterdam winners, Kenny De Ketele and Moreno De Pauw of Belgium not to mention Berlin winners, Dutchmen Yoeri Havik and Wim Stroetinga. Leif Lampater might have had an influence on the classment too but his partner big strong German Marcel Kalz – who won here in 2014 with Big Bob Bartko – went out of Berlin with a bad saddle sore and is replaced by young German, Max Beyer. 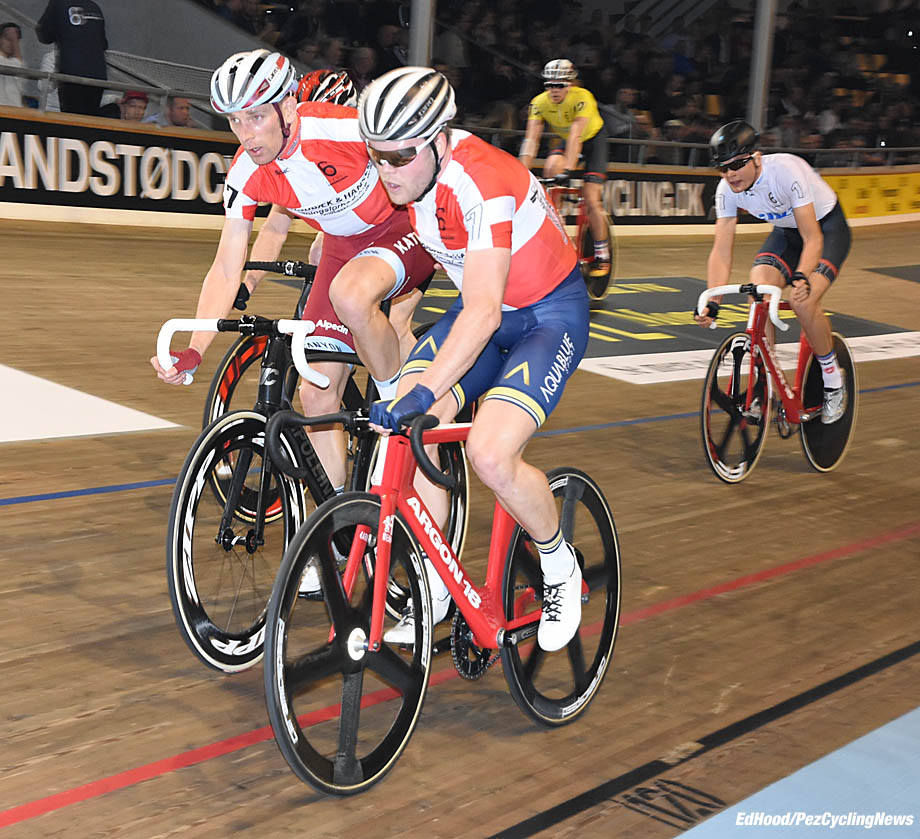 The chase – and the evening – ended with Michael Mørkøv and Lasse Norman leading from Jesper and Marc Hester – it can’t be good for the opposition’s morale that Michael never looks as if he’s really trying too hard. . . 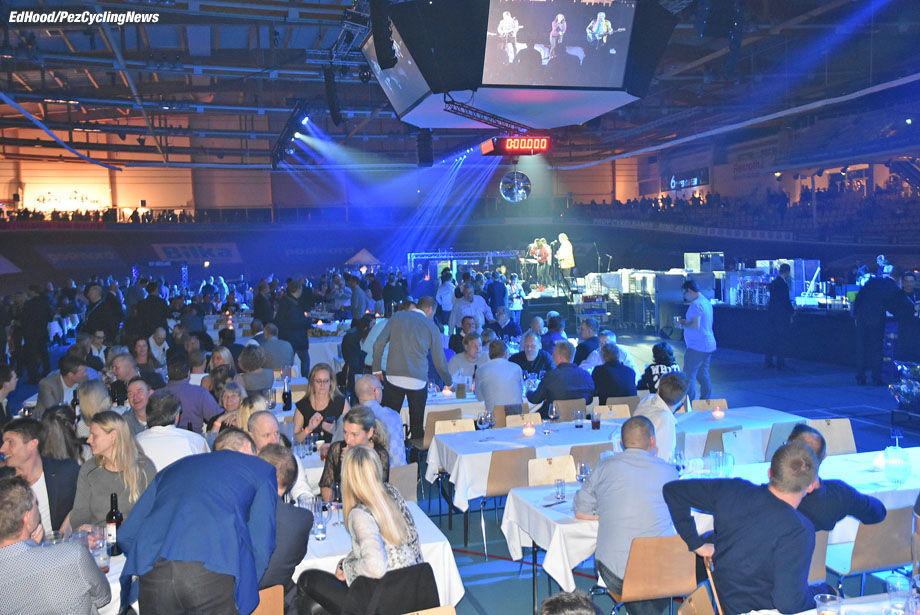 And we have a band; Fede Finn & Fonny Boyz, I thought their rendition – in Danish – of Suzi Quatro’s ‘If You Can’t Give Me Love’ was cool, however friends in Copenhagen are making dangerous comparisons with the ‘Worthy Beats’ who played here a few years ago and are officially the worst band ever to torture the paying public at a six day. There’s ladies racing too but I have to do some work in between taking pictures. . .

Sprints series – Hans wins a basket of goodies – Martyn and I claim the peanuts for our hotel room. Derny – and the novice pusher off behind me almost takes me out as I shove Hans into the fray – it’s OK the gun firing Dude but you gotta wait ‘til the guy in front actually rolls before you start pushing, amigo!

A visit from the UCI commissar – our boy Nico Hesslich has to tape up his Garmin display or turn it upside down. It’s at times like these you realize how much we need the governing body with all the good, meaningful work they do. . . 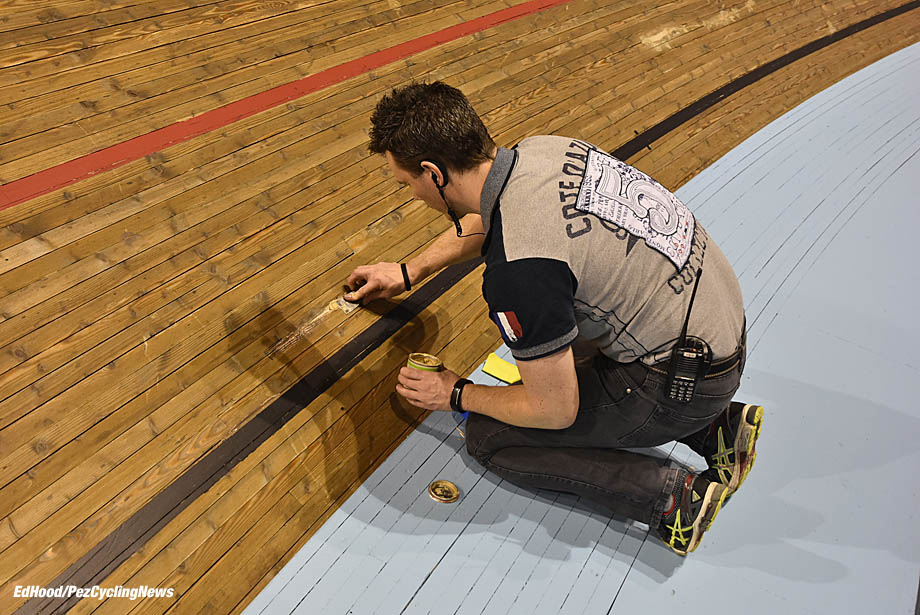 But in fairness, he does make sure the track gets TLC.

Devil – I forget who won that; but then we get a surprise as youngsters Casper Folsach and Fred Rodenberg blast the one lap TT with a time just shy of the lap record – wow! Derny 2 and time for Johnny Wakelin and ‘In Zaire’ – the perfect Derny tune, a surprise here in that Michael Mørkøv didn’t win. . . 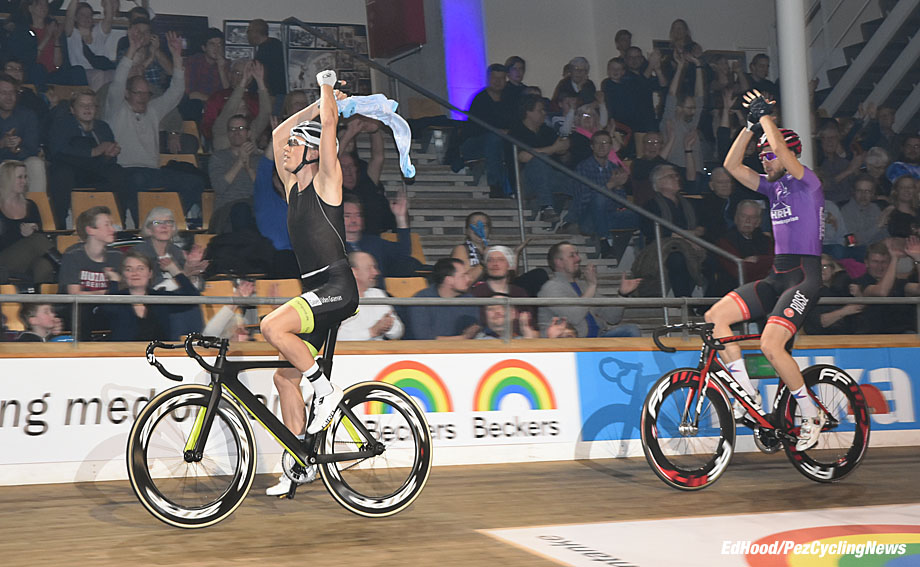 And to close, the 10 lap ‘balustrade’ sprint where the riders track the fence and perform some tasty trick riding to Dario G’s ‘Sunchyme’ – I must get some pictures, tomorrow. And that’s night one – time for the first washing, seven guys, that’s a lot of coat hangers!

Day Two:
‘Copenhagen south of Sweden’ goes the lyric, continuing, ‘for Paris, Rome and Amsterdam I don’t really give a damn.’ They just don’t write ‘em like that anymore. It’s a rolling presentation tonight, much better all round, it keeps thing moving, looks good and gives the riders a good warm up. Sprint series, devil, Michael Mørkøv wins – that’s surprising. . .

‘Cara Mia’ pumps, telling us it’s madison time and we go right in Sylvester’s ‘Do You Wanna Funk?’ all time quality chase tune. It’s ‘nippy’ out there, especially on 51 x 15, the maximum gear for the race as set by organizer and ex-pro, Michael Sandstod – and don’t try to duck it, the UCI commissars are checking it.

It’s a good chase with a convincing finale, Belgians De Ketele and De Pauw slip away late and rave favorites Michael Mørkøv and Lasse Norman can’t get them back before the line. Music; and it’s that Danish version of ‘If You Can’t Give me Love’ again – we may well be tired of that one come Tuesday evening. 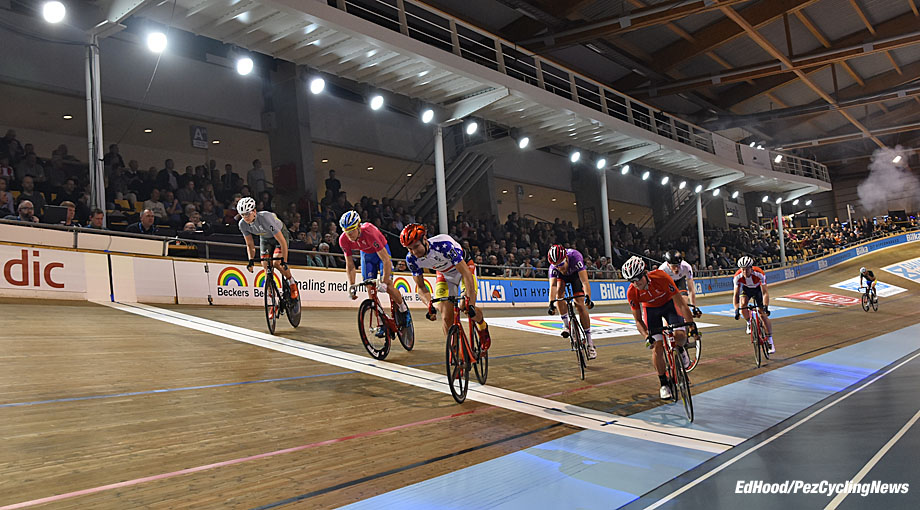 Our Polska Boy Adrien Teklinski wins the ‘longest lap’ – stay with me on this one . . . the riders line up on the back straight then ride slowly to the start line where they have to pop a standstill – anyone who crosses the start line is out – until the gun fires and then it’s a mad charge for the line. It’s OK, I guess. 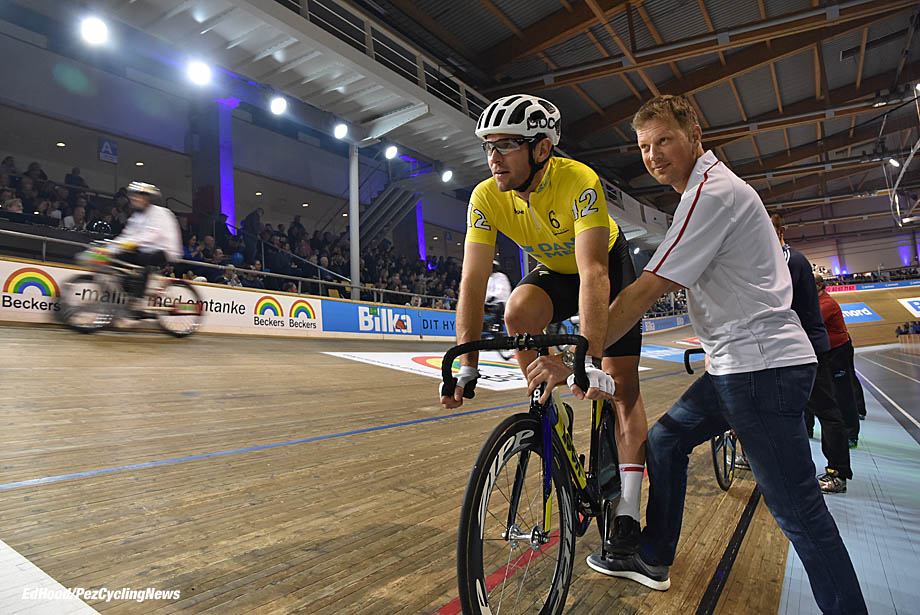 Derny next, we don’t win that though. What’s this, Alex warming up on the rollers for the 500 meter time trial – unusual, he must be serious. Alex and partner Casper Pedersen stop the clock on a 26 low – track record! 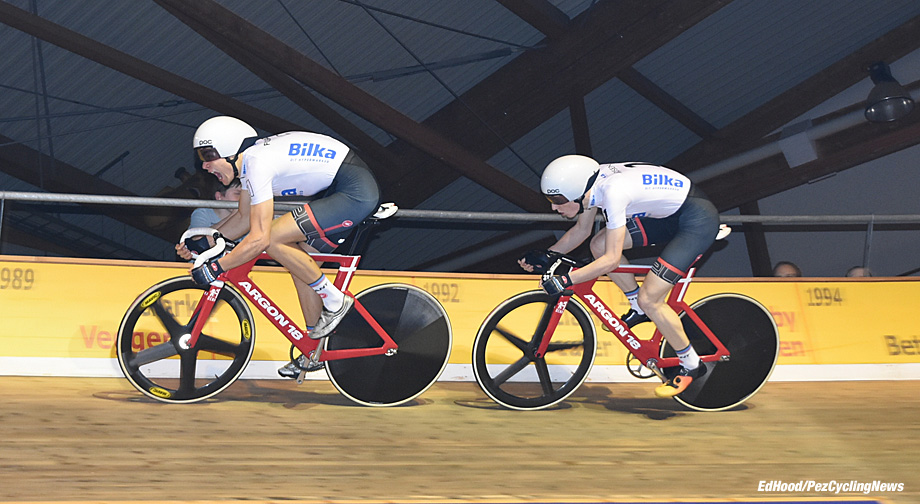 It lasts all of two minutes as fast young couple Casper Folsach and Frederik Rodenberg rocket to a 25.917 – wow! Derny, devil, music (ouch!) and just the one lap TT to go – Folsach and Rodenberg burn that up too. Folsach has two Worlds bronzes and a silver plus an Olympic bronze in the team pursuit – so riding deep into 60 kph plus territory is nothing new for him. Rodenberg has a Worlds and Olympic bronze in the same discipline. And that was Friday; Saturday isn’t fun – with an afternoon and an evening sesh. Six hours sleep, if we’re lucky. . .

Day Three, afternoon:
We meet Alex as he emerges from the elevator – he’s not looking his usual happy, sharp self; ‘I’m not really a morning person !’ we can see that, Dude. Sprints first then the Derny; Folsach wins that too – he’s becoming the ‘Derny King’ here to add to his chrono talents. Aussie, Harrison takes the devil – and just as the 500 TT is set to go; ‘This is the management, there is a fire alert, please evacuate the building immediately.’ We head down to the cabin to put on jackets – Copenhagen, January isn’t a T-shirt deal. 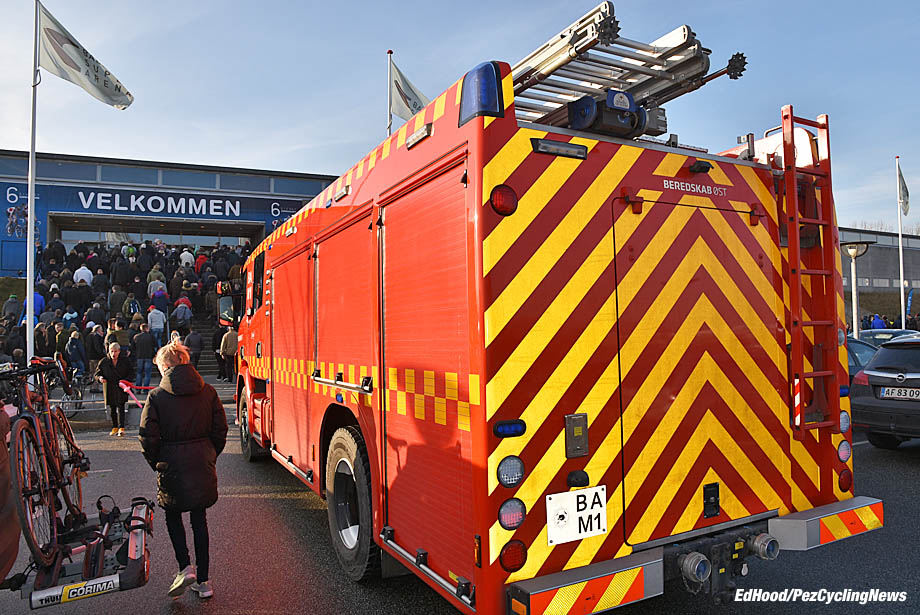 The security guard bursts in; ‘the place is burning – OUT!’ It isn’t, of course but we troop out, then back in – a drill, requested by Copenhagen Fire Department to test the response, apparently. The chase is cut to 60 laps; I can’t remember who won but I do remember they played Clean Bandit’s, ‘No Place I’d Rather Be’ – yup, that sums it up. Tidy up ‘till it all starts again after dinner. 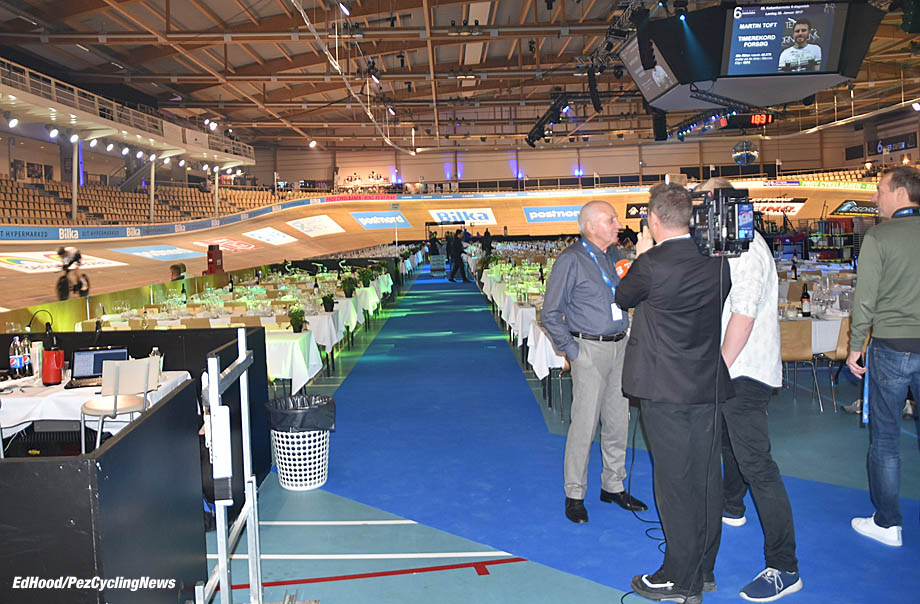 What’s this, Ole Ritter getting interviewed, huddles of officials and a man steadily lapping the boards.
I ask one of the old journos who I’ve seen at every six day here since my first in 2005 when Madsen/Pil won – transpires it’s an attempt on the Danish Hour by Danish TT Champion, Martin Toft. The standard to beat was Ole Ritter’s 1974 rode of 48.879 kilometers when he unsuccessfully tried to win the Hour back from Merckx – that bid is made famous by the wonderful documentary film, ‘The Impossible Hour.’ 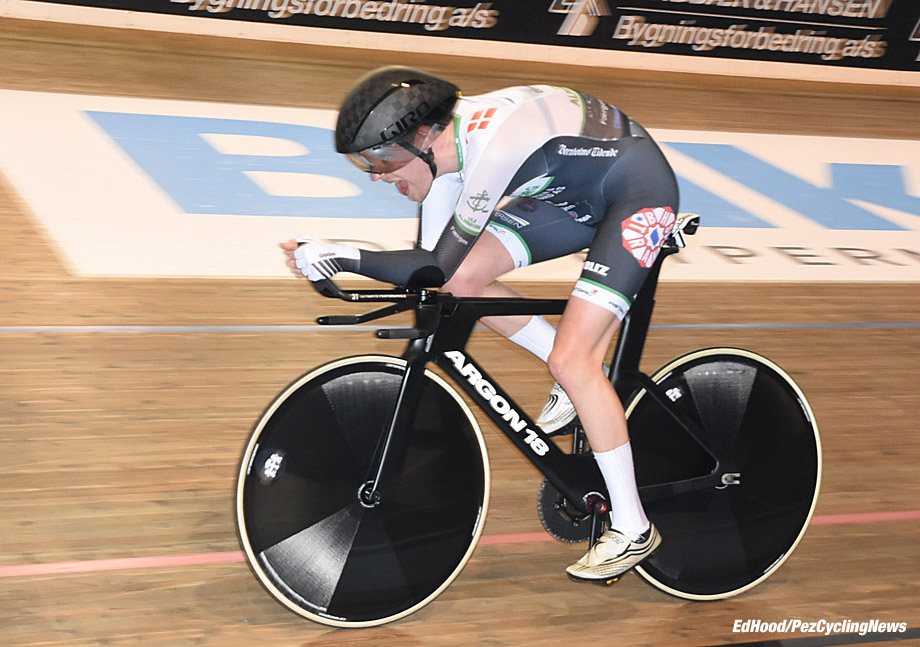 Toft ran out with 52.114 on his Argon 18 geared at 54 x 13 to smash through Ritter’s distance in front of very few fans with zero atmosphere. Sprints kick us off with a bit of disco-fied Petula Clark, ‘Down Town’ to accompany. Devil then the chase; and Hans is out with, let’s call it a ‘sore behind’ – pretty nasty if truth be told. The chase is subdued but that’s hardly surprising given the length of the day – but Michael Mørkøv’s quality shines like a beacon when he makes one of his dazzling moves. Havik and Stroetinga win. 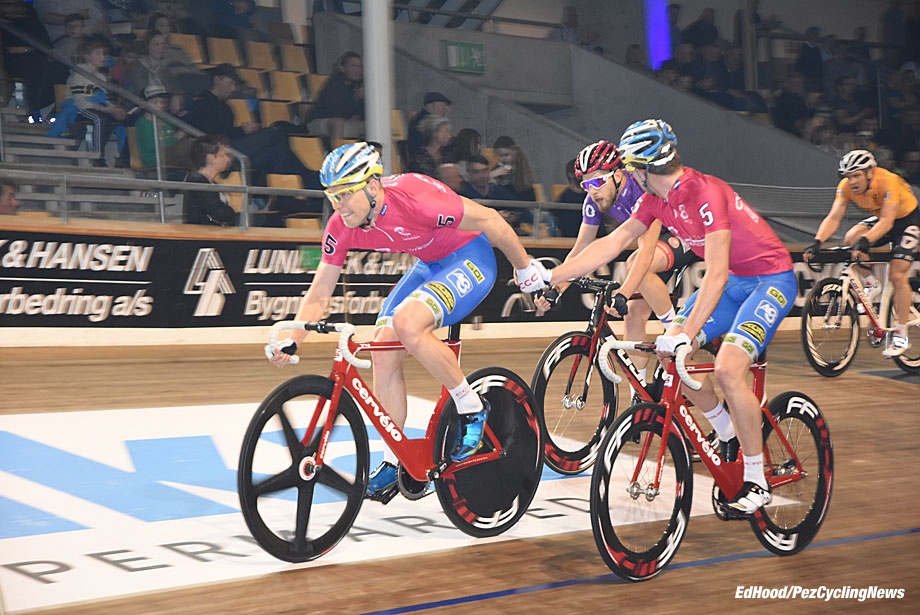 As the band does it’s thing I chat to our man, Adrien Teklinski, a sprinter originally he’s lost 10 kilos and changed disciplines to team pursuit. He’s a 1:01 kilometer man but comes here off a road training camp and is finding the high revving chases hard to get used to. Derny and Alex looks to be revving a bit; ‘he took the wrong bike!’ Dirk, our mechanic explains – oops! 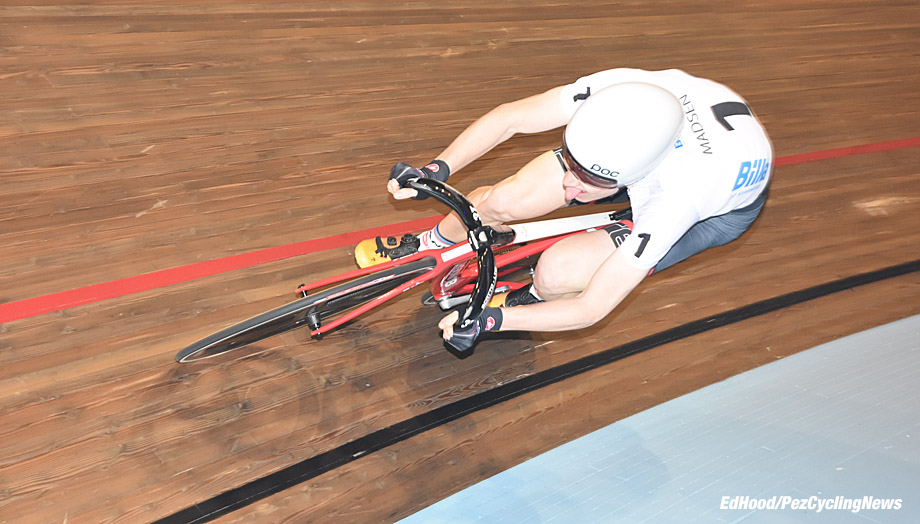 # Part 2 of Ed’s Copenhagen adventure up soon on PEZ. #