Ed Hood has moved on from Berlin to Copenhagen for the next and last ‘6 Day’ of the 2015/16 season. By the sound of things the hard work was the drive from one velodrome to the other, but the ‘circus’ is all set up and the boards are vibration under the rider’s wheels to the bongos, dernys, big motors and the music.

The toy soldiers march neatly off the boards, the cannon blasts – it’s damn loud, I can testify – the smoke clears, the Mavics and Fast Forwards roll, the bongos rattle and Paul Delicato’s great voice comes in; ‘Cara Mia why, must we say goodbye. . . 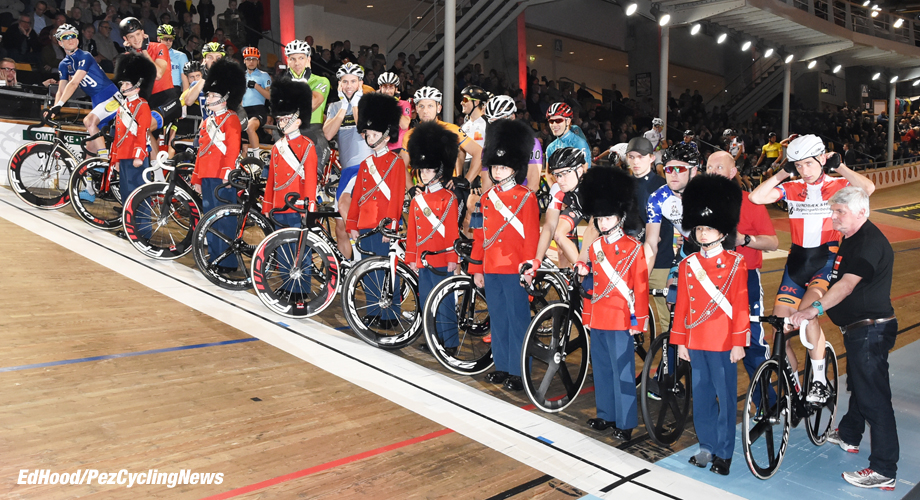 Berlin is just a stat now and the circus has rolled north to Copenhagen – eventually. The ferry out of Rostock was cancelled due to the gales so we had to re-route to the shorter Baltic crossing to Denmark from Puttgarden. Unfortunately for Dirk the mechanic and Etienne the soigneur, there are two Puttgardens in the satnav for Germany, both of them chose the wrong one and ended up doing 350 kilometres too many in their campers – ouch!

Kris chose the right Puttgarden, as you would expect – albeit was a long night for us with a four hour sleep in a truck stop and a couple of hundred kilometres more than usual. But we’re here now and set up for the last six day of the winter. This will be edition 54 of the Copenhagen Six Day with the first race held in 1934.

The race used to be held in The Forum in Central Copenhagen, moving out to the suburb of Ballerup and the 250 metre track here for the 2002 edition – but the 2003 and 2004 races were lost when the stadium roof collapsed under a heavy snow fall. 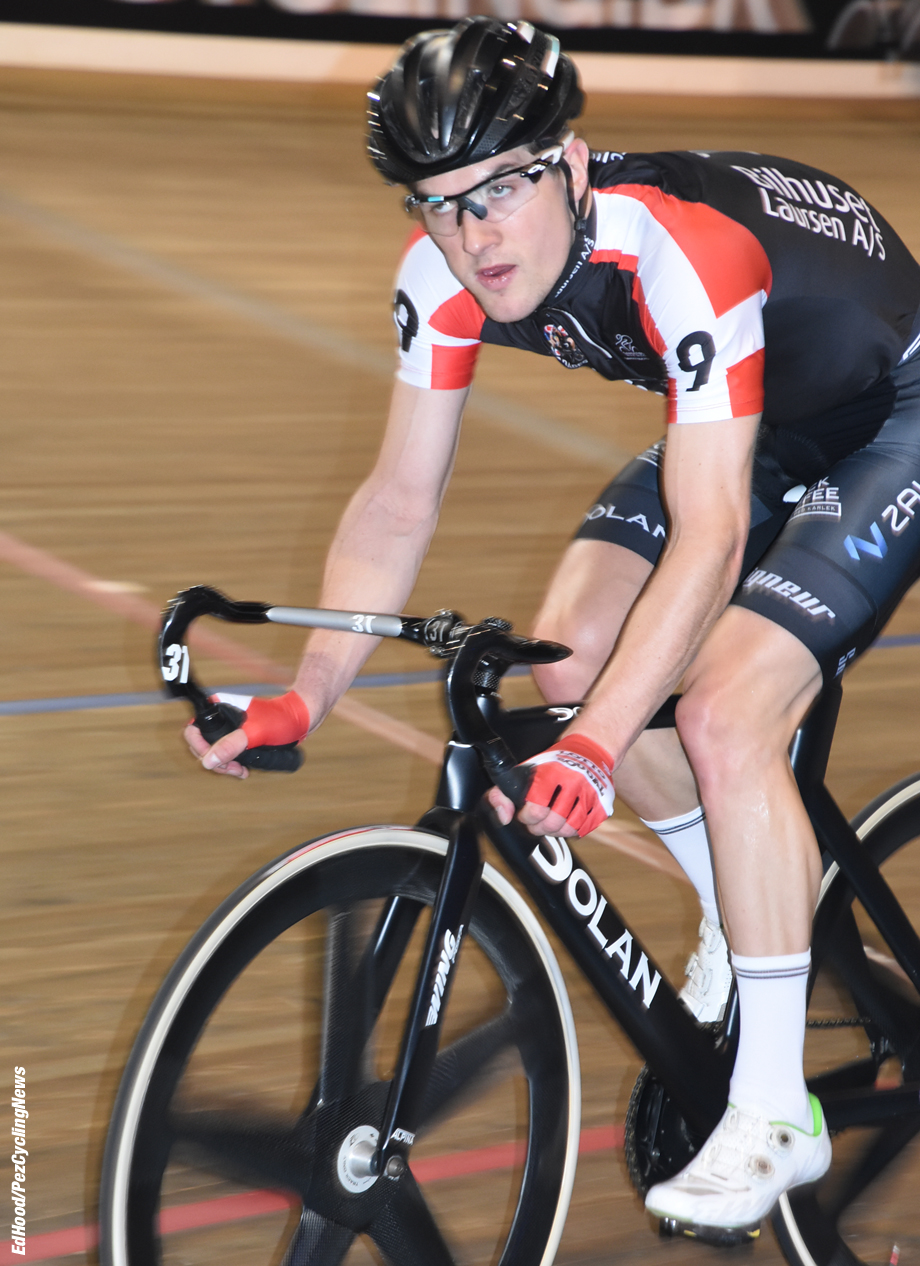 Home Boy, Marc Hester was paired with the ‘best in the business’ Belgium’s Iljo Keisse to win in 2012. The following year saw Michael Mørkøv ride with Olympic Omnium Champion Lasse Norman Hansen to win and in 2014 it was German giants Marcel Kalz and Robert Bartko – in his last race – who won.

Last year saw Mørkøv/Rasmussen back on top but Michael has signed for Katusha for season 2016 and those Russian sponsors don’t get excited about six day races in Scandinavia. Therefore there’s no Michael; Keisse – in the desert with Kittel; Norman Hansen – who’s on final training for the Worlds Omnium or Big Bob Bartko. 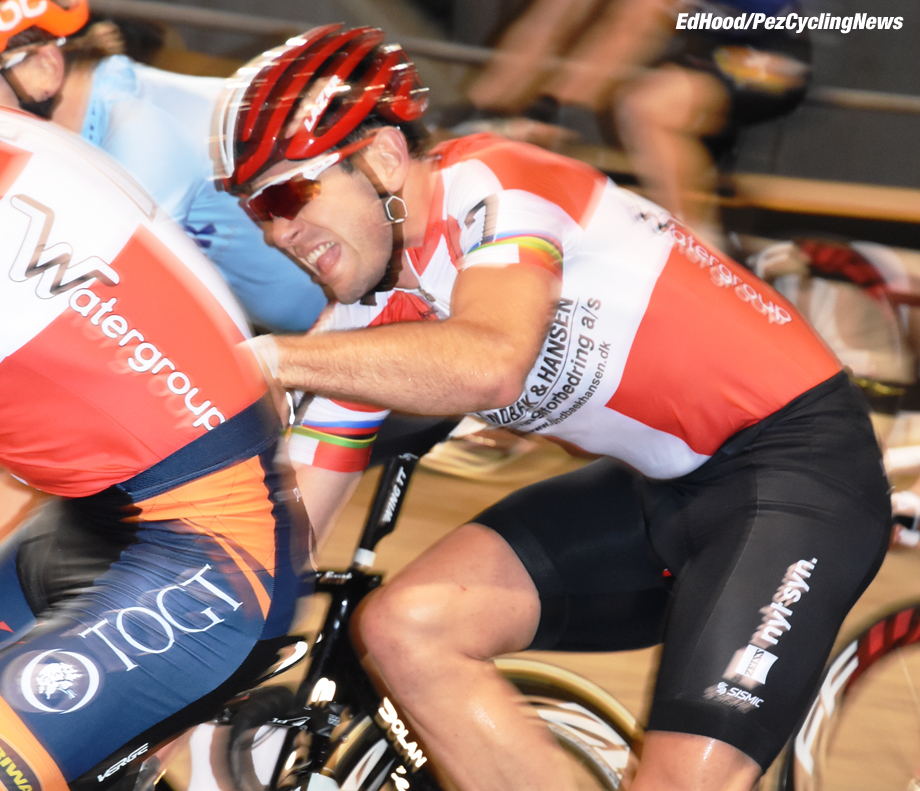 Alex rides though, with Michael’s wee bruv, Jesper – they weren’t setting the boards aflame in Berlin but may well just have been using it as a tune up for their home race. That said, Alex was neutralised for a day in Berlin due to sickness – and didn’t really seem on best form. Kalz is also back, riding with Christian Grasmann – Big Marcel was second in Berlin and Grasmann won in Bremen so they’re definitely a force to consider. 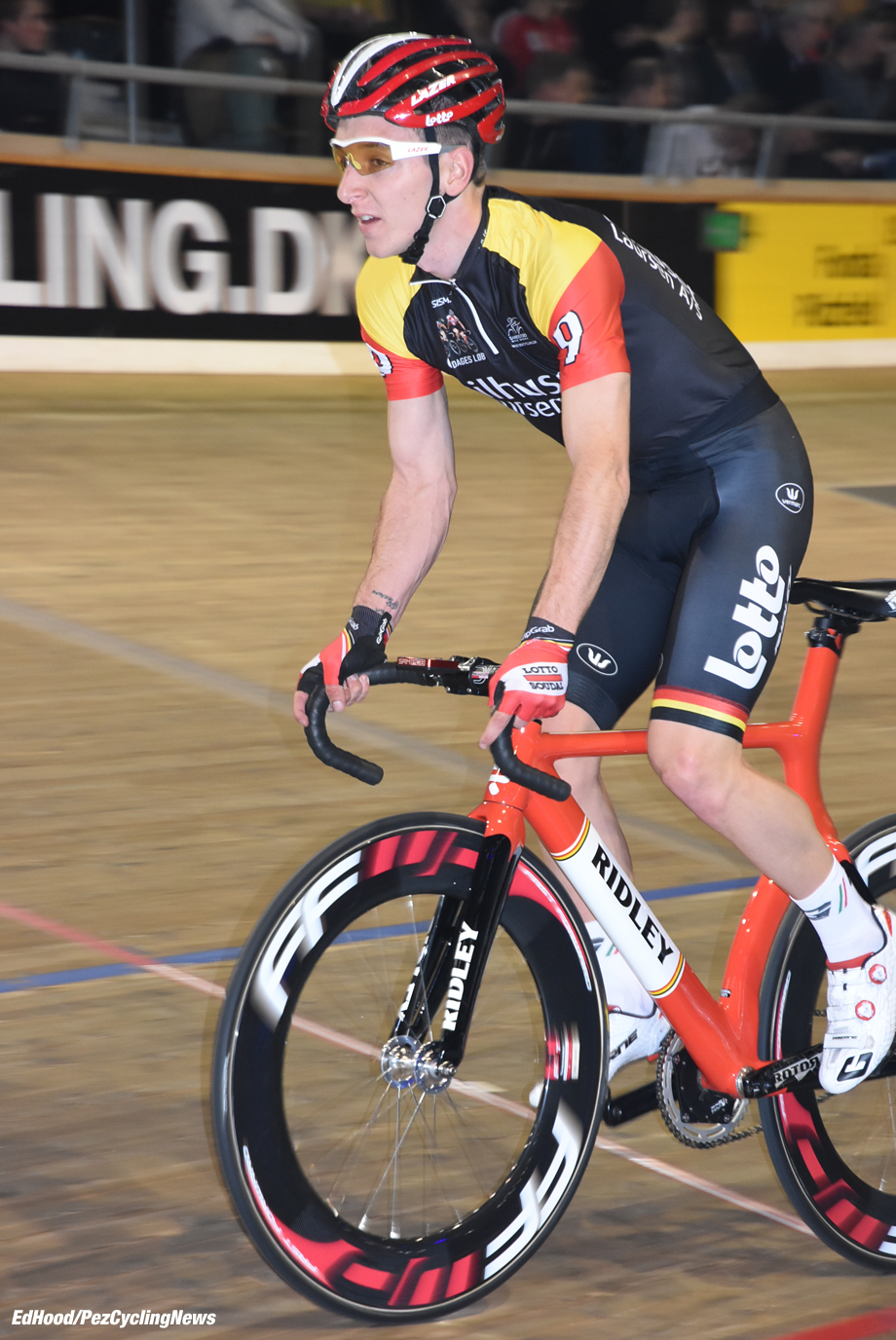 The best hope for a home win has to be Marc Hester who rides with Belgian beast, Lotto’s Jasper De Buyst, twice a winner in Gent. 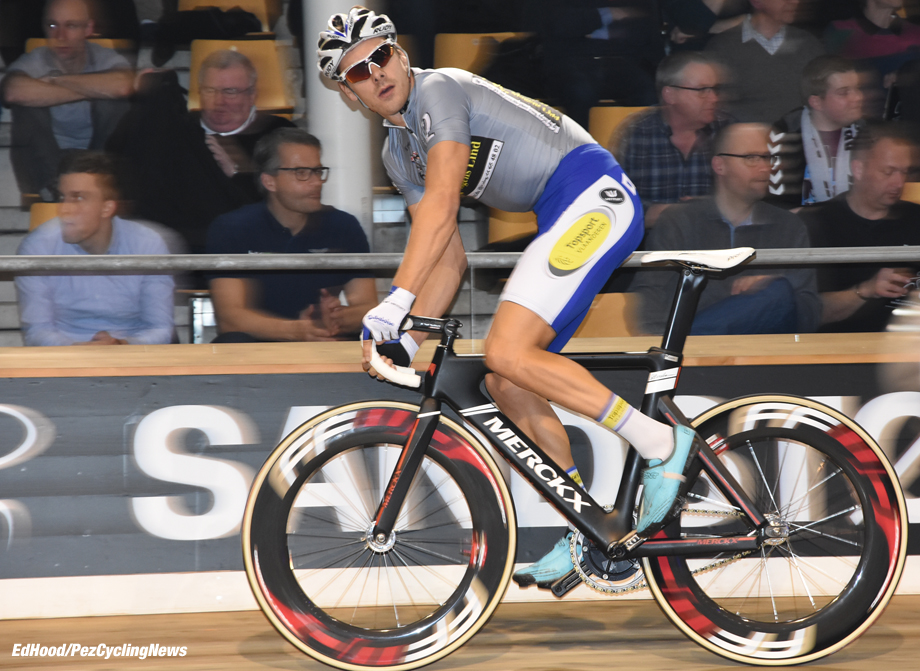 And on the subject of Belgian Beasts, Berlin winners Kenny De Ketele and Moreno De Pauw will be running hot off their Fatherland form – but with no GB boys to close late gaps for them here. . .

But getting back to Cara Mia, it was a good race with the classment taking shape from the off. 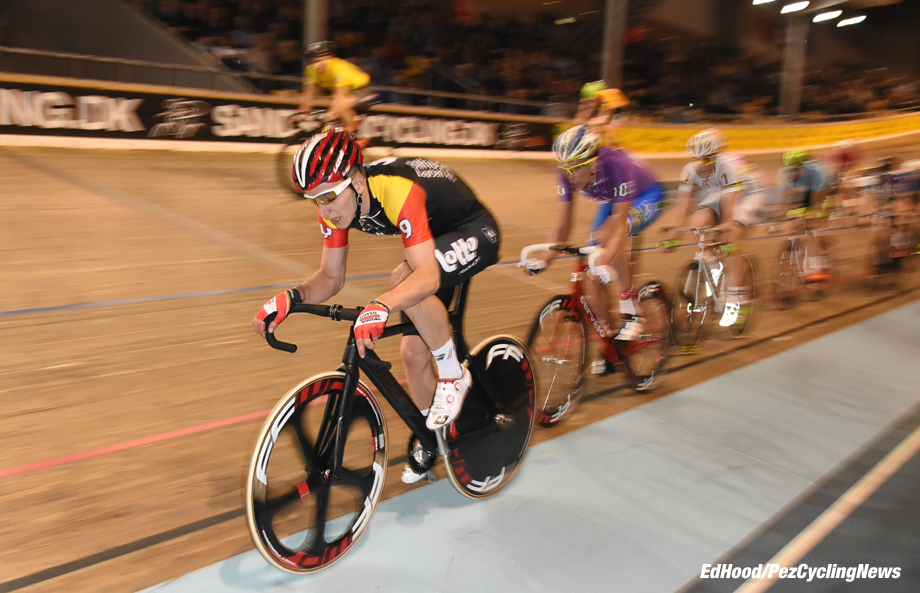 De Bust/Hester, De Ketele/De Pauw, Mørkøv/Rasmussen, Vergaerde/Havik and Muller/Graf all on the zero lap. The big surprise was Grasmann/Kalz @ six laps; the latter apparently suffering from a bad saddle sore and having to be neutralised – no podium for the Germans then. 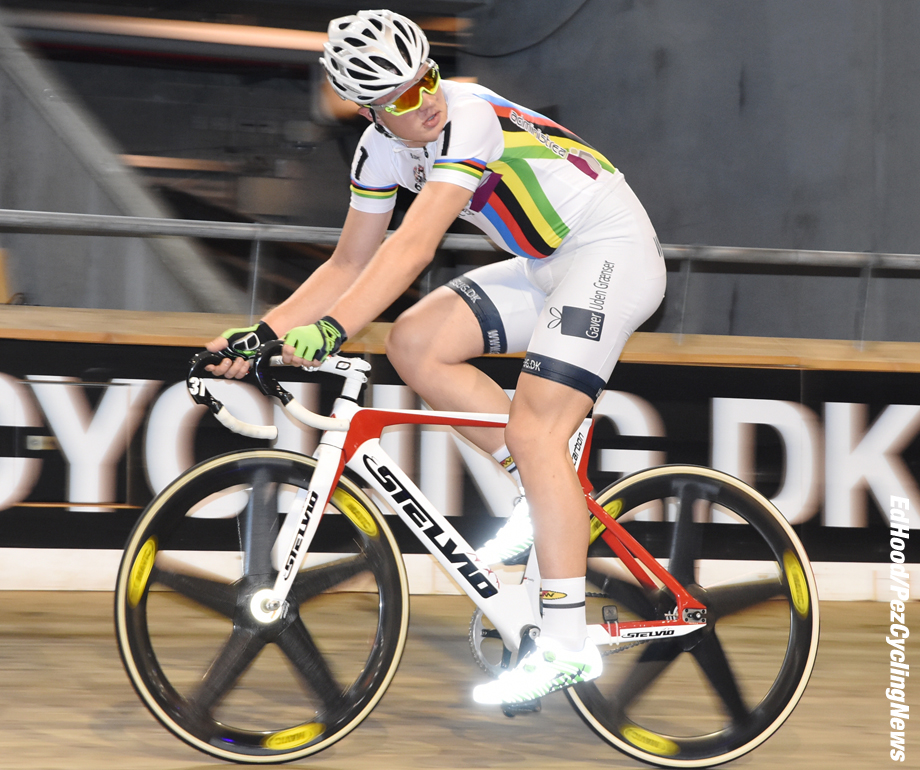 We have six riders* here; best in the standings is Daniel Holloway* (USA) who rides with big Daniel Hartvig (Denmark) and starts day two in sixth spot @ two laps; in seventh we have German duo Sebastian Wotschke* & Hans Pirius* @ 4 laps; Elias Helleskov Busk* (Denmark) rides with Dutchman Melvin Van Zijl who came down hard in Berlin on the last night – they’re in eighth spot – also @ 4 laps; in 10th spot is Matthias Krigbaum* (Denmark) who’s with World Scratch Champion Lucas Liss @ 5 laps and finally we have Frederik Schwartz* (Denmark) who’s with Poland’s Wojtek Pszczolarski @ 5 laps in 11th spot.
It wasn’t a bad evening apart from Elias having to come in a time or two in the 75 K chase with breathing problems. 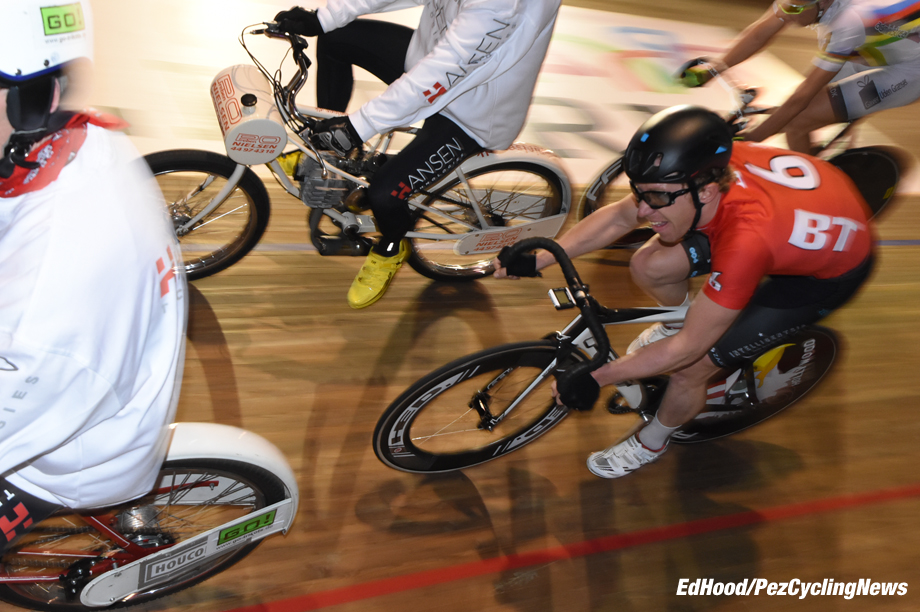 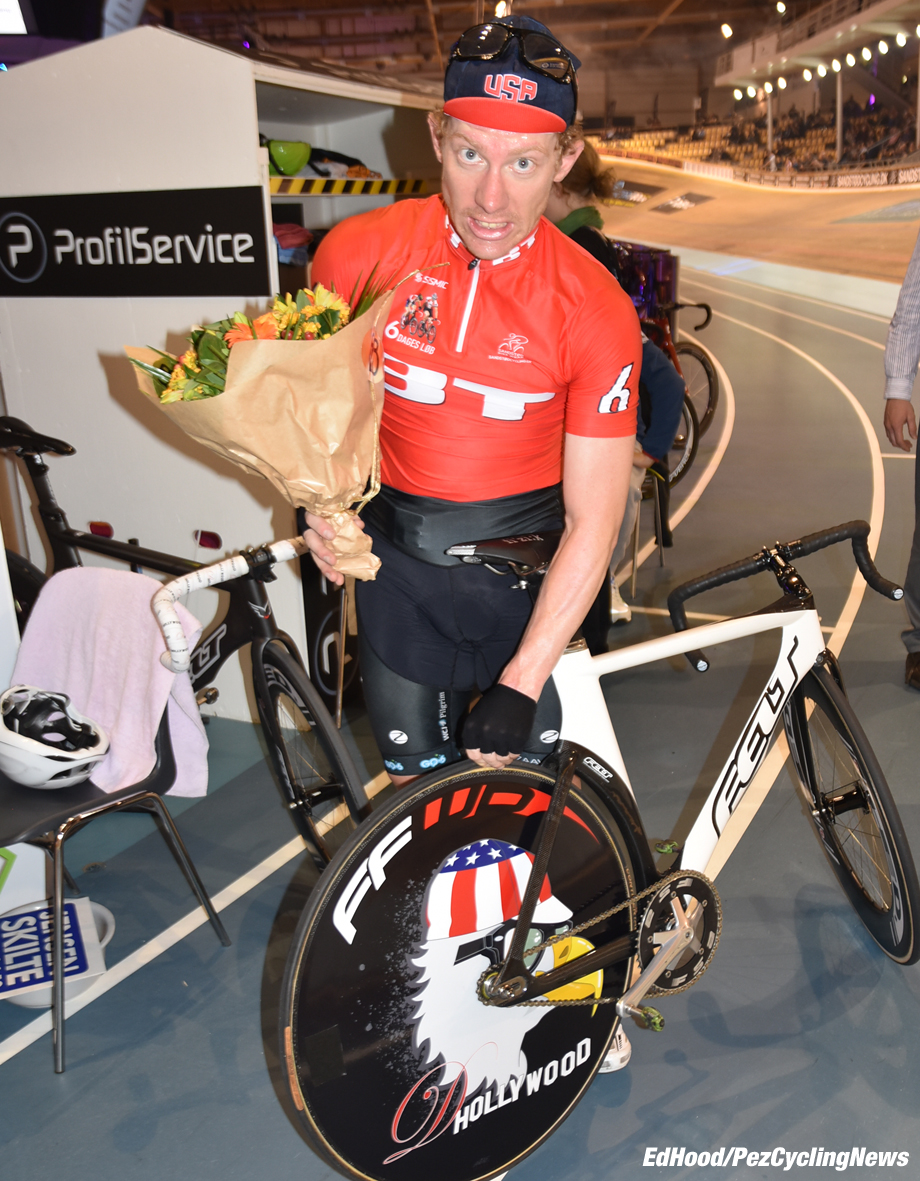 We even had a win in the Derny courtesy Daniel; despite a softening tyre – he finished on the rim. 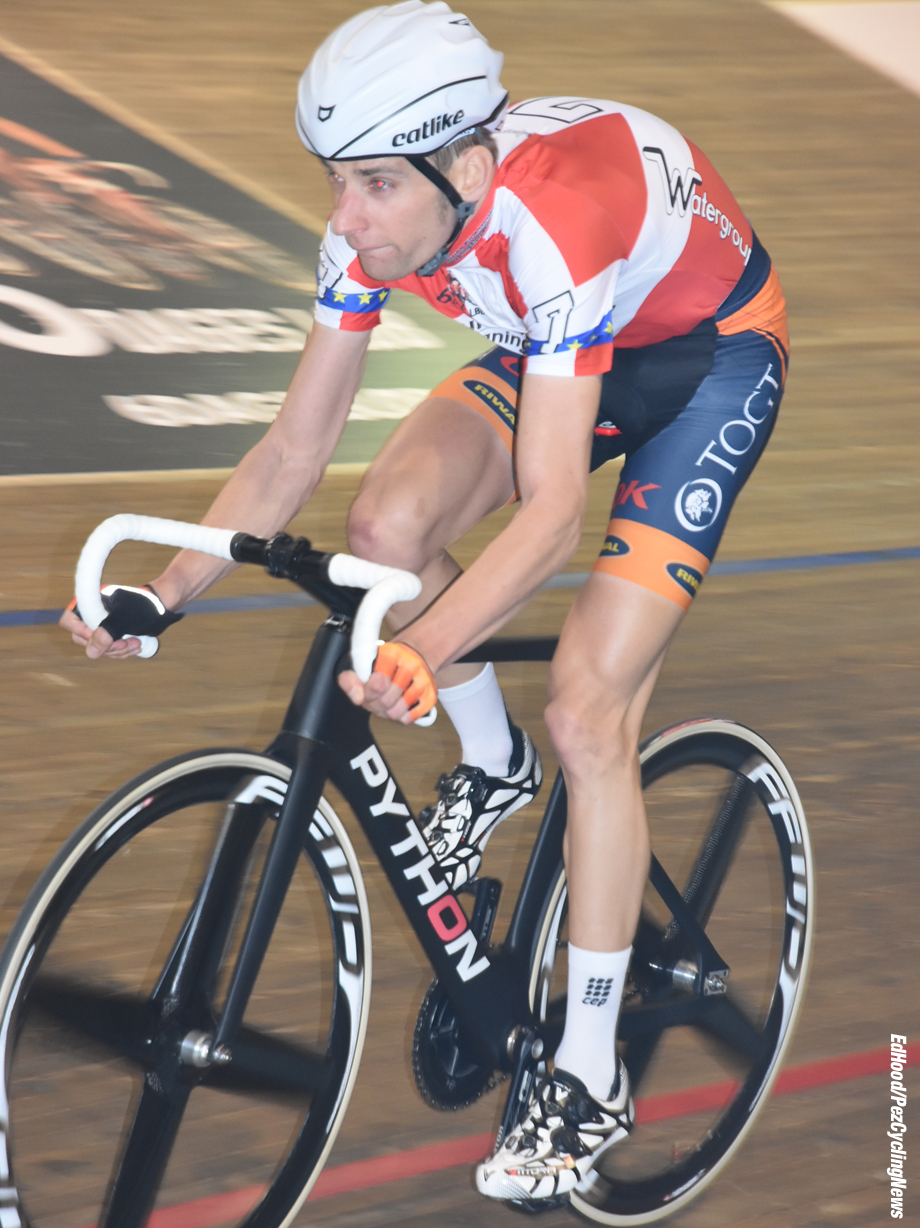 Day Two and a poor crowd – the sprint series opened proceedings with The Tramps, ‘Disco Inferno’ to accompany it – always a good six day tune. Kalz had to pull out of the 60 minute chase, his soigneur, Etienne Illegems reckons the big Berliner has the worst saddle sore he’s ever seen – and Etienne has spent a lifetime around pro bike racers.

It was a good night for us; beginning with Daniel winning ‘the longest lap’ race; this is where the riders have to pop a standstill on the home straight and hold it ‘till the gun fires and then it’s a mad ‘breenge’ (to use a Scottish word) for the line one full lap later. Of course, many of the guys can’t hold the standstill and roll forward through the line before the gun goes and are eliminated. 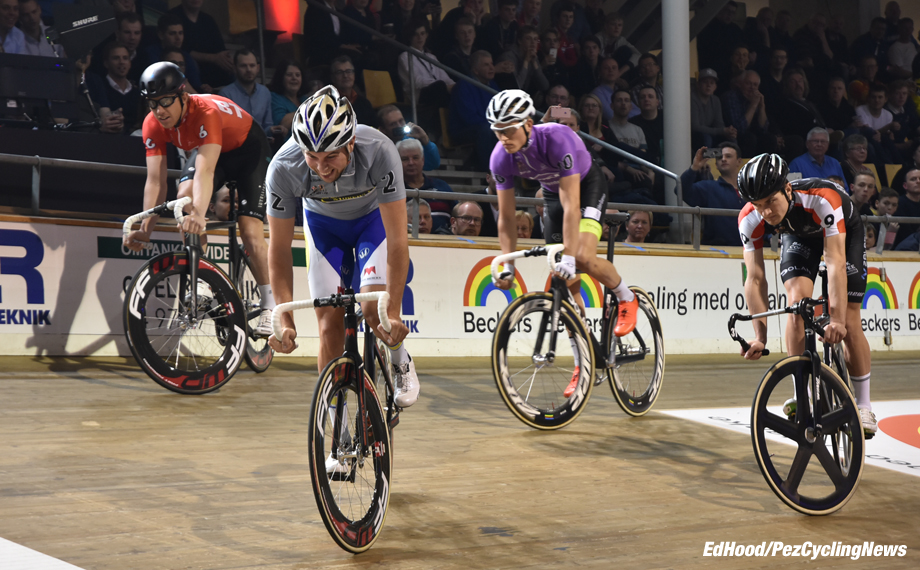 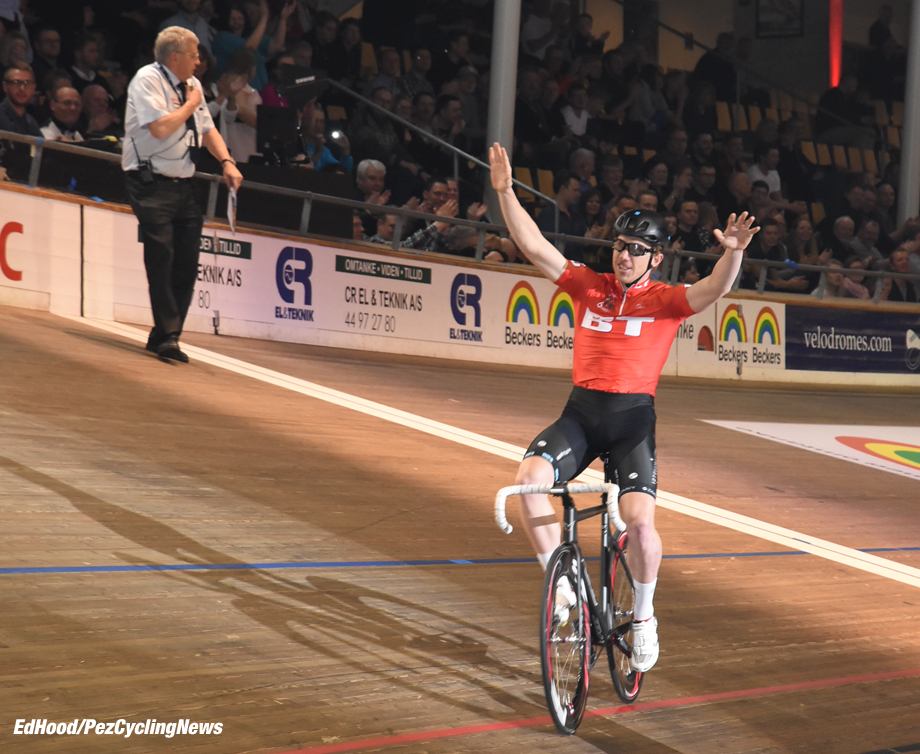 Daniel did a track stand which Gregory Bauge would have been proud of then jumped hard as the gun fired to leave the survivors flat footed. 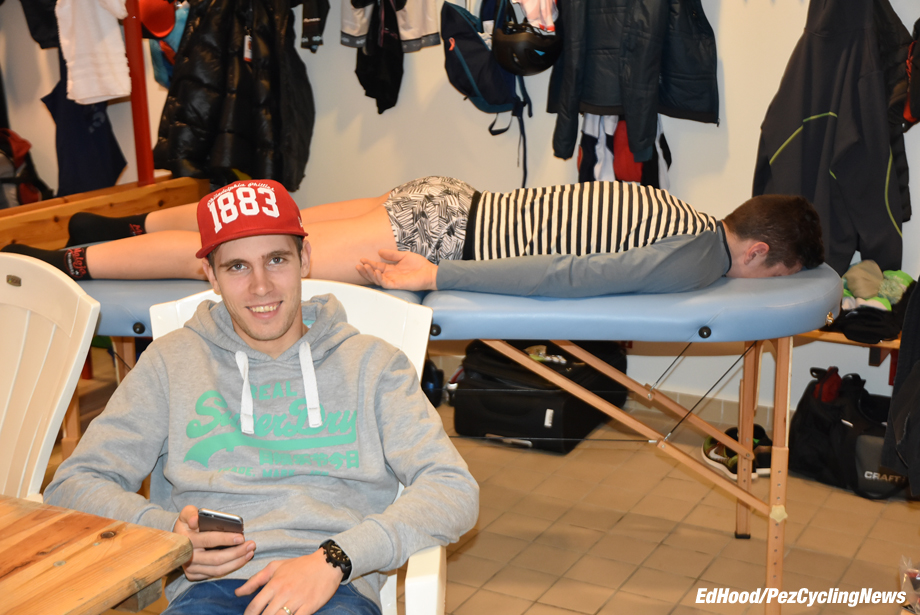 Then Matthias won the Derny and Hans and Seb were fastest on the night in the 500 meter time trial. It was a happy cabin. It’s a big mistake to demonstrate that you’re decent at pushing folks off in the Derny and stayer races; every race thereafter you’re sought out by mechanics and riders; ‘you push in the next race?’

I pushed Zak Kovalcik off for the stayer race and he was up there battling hard – until he lost the roller and the Super Arena air hit him square in the chest. His screams could be held all over the stadium – fortunately his pacer heard him too, closed the throttle and Zak made it back like a drowning man dragging himself on to a life raft. 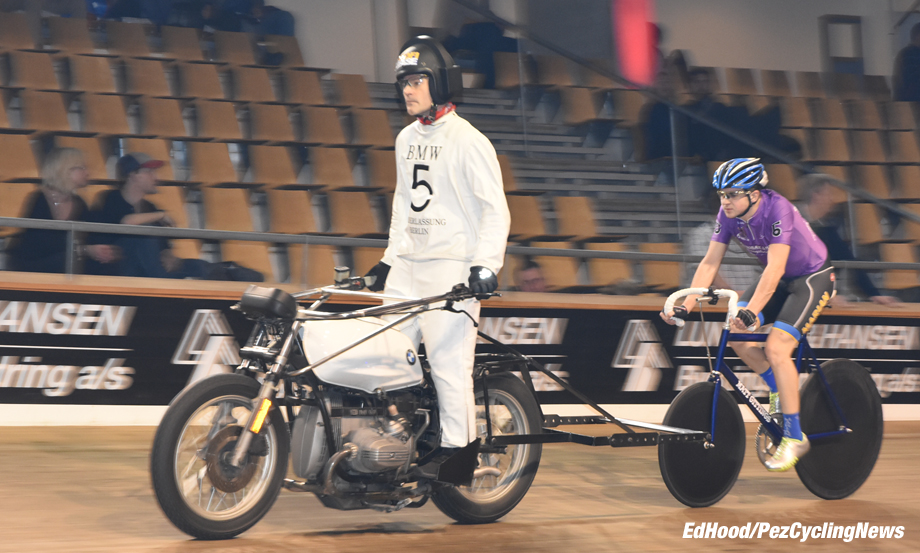 Englishman Matt Gittings is riding too – but the Stayer Mafia have him well shut out. 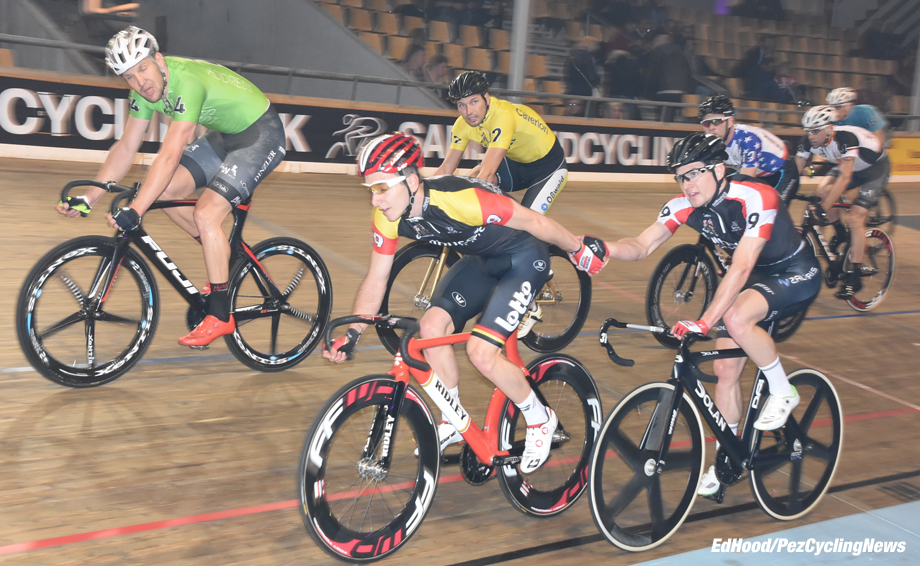 I was a tired boy when that last 30 minute chase came to a halt in the wee small hours. . .

The Seebach Band – cheesy, Scandic pop, I concede but now I really feel at home. . .

It’s the tune which opens proceedings for the juniors and amateurs I made a point of being track side early to hear it. 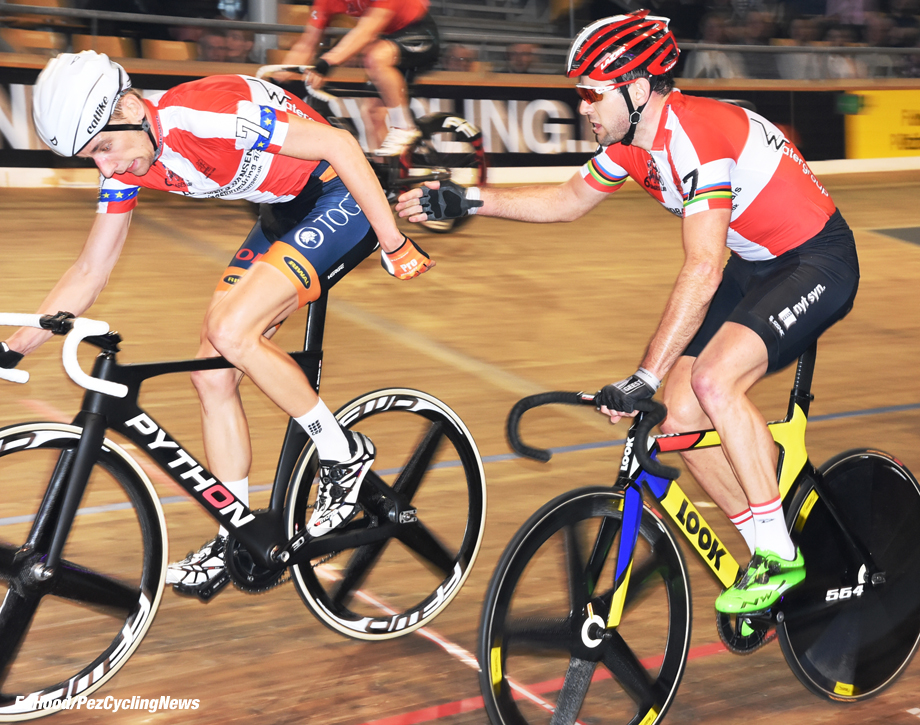 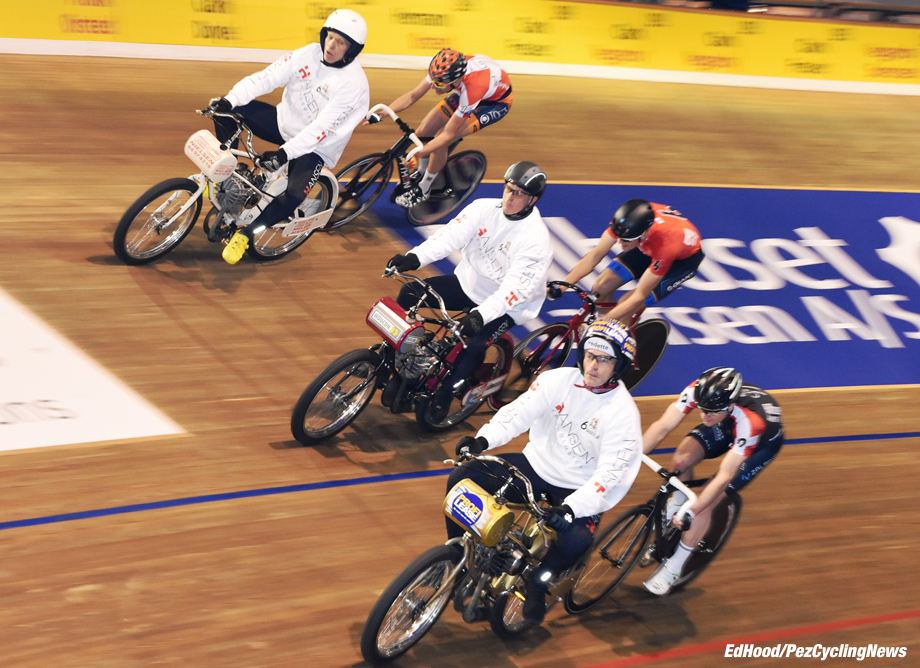 Saturdays in Copenhagen are horrible if you’re staff – a split session with afternoon racing, a break then the big evening programme. However, I shouldn’t complain, our ‘Dan The Man’ partnered with ‘Big Danish Dan’ Hartvig won the afternoon chase. Mr. Holloway has the best legs I’ve ever seen him with in a six day and coupled with great morale and the best support (that’s US – Kris, Martyn and me) he’s one of the best riders on the boards. I had to have a sleep in one of the trackside cabins between the sessions – the first time I’ve ever done that in all the six days I’ve worked at.

There’s a lot of sickness in the peloton; Kalz comes and goes, as does Liss, Havik is out for the minute, Grasmann isn’t well and Barth is neutralised. Our boy Mathias isn’t best pleased, Liss is his partner and Mathias was keen to perform well at his home race. 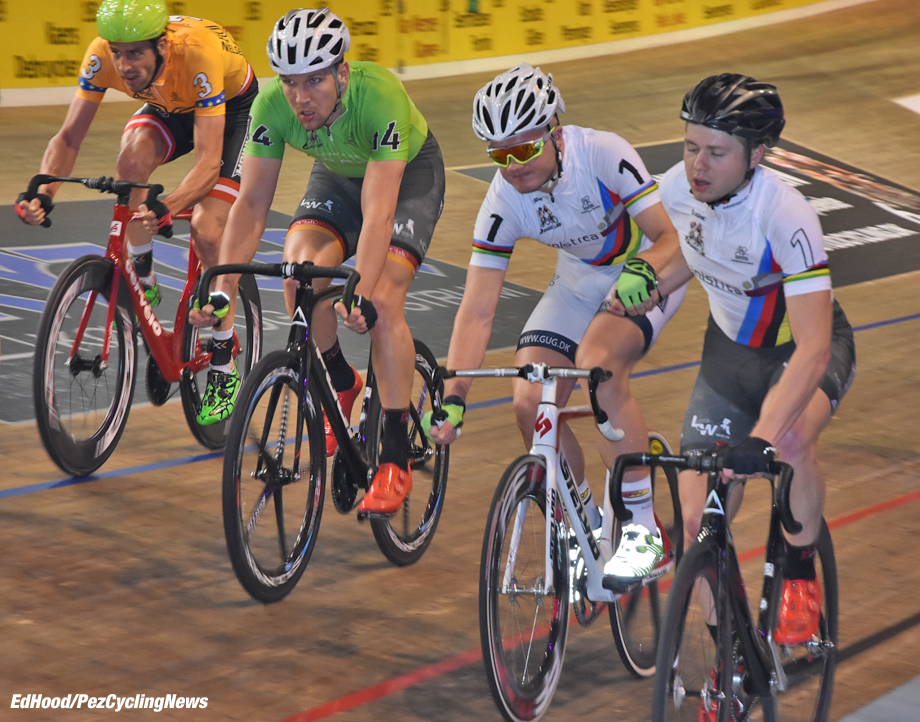 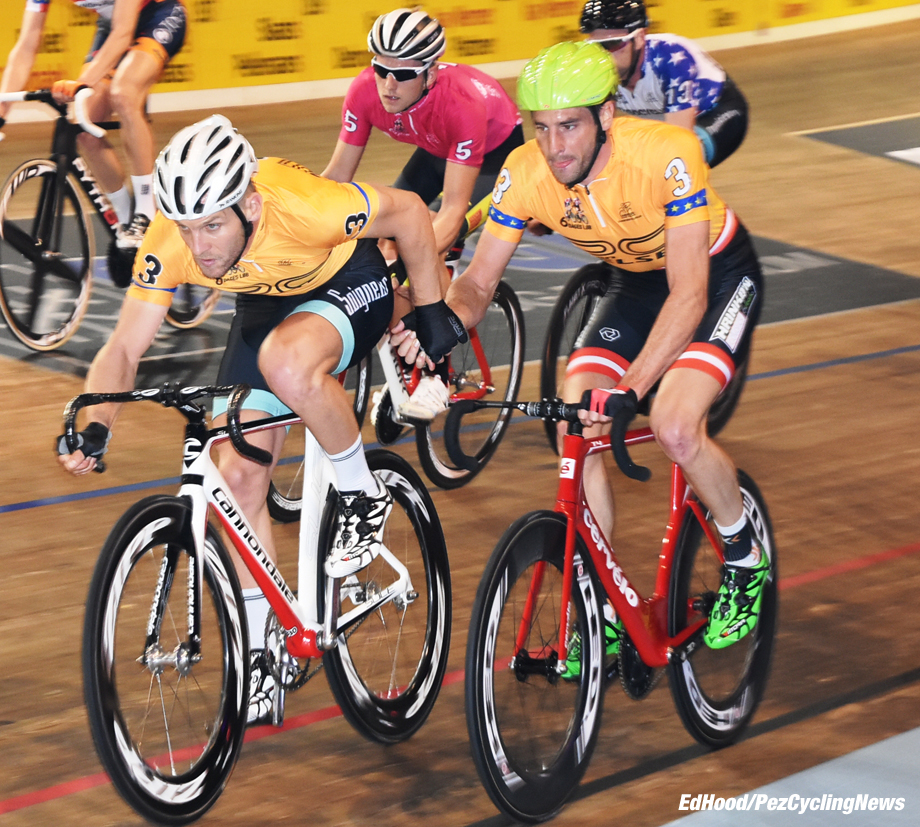 Evening sprints to start then a 60 minute chase which got serious inside 20 minutes to go but wasn’t in line for a ‘Madisons Golden Globe’ award. The band were next – and we’ll move quickly along to the ‘longest lap.’ 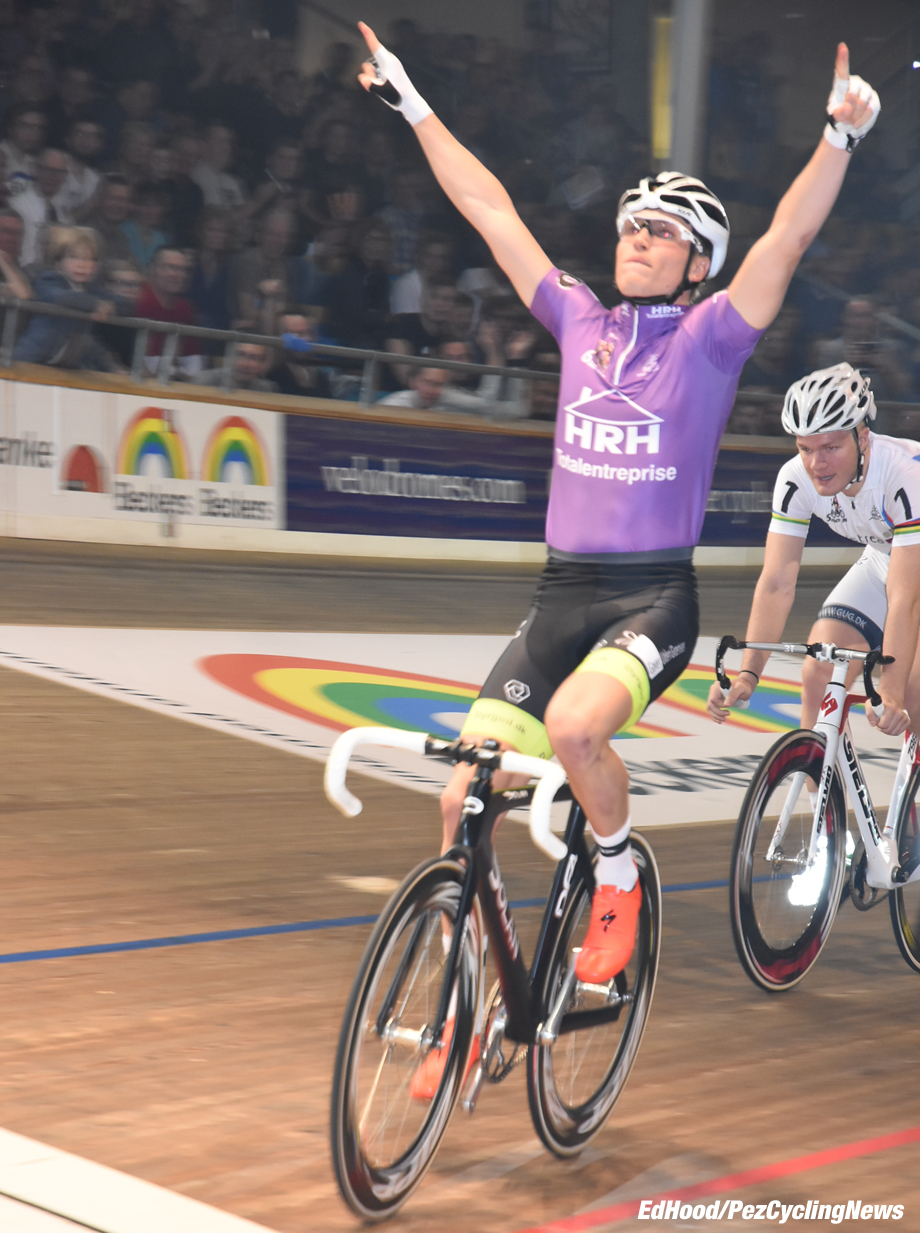 Last night’s winner, Holloway was the victim of a Danish combine with Mathias blocking the American out of the standstill and another of our boys, ‘Fab Five Freddy’ Schwartz scorching the win. Daniel was going to appeal to the UCI commissar but we couldn’t raise the 100 Suisse Francs. Dernys; I had to push, again; Johnny Wakelin ‘In Zaire’ is the sound track, cool – Kenny wins, surprising. . .

We had no one in the 500 meter time trial; another Derny, more pushing off for Ed – Jesper wins, another surprise result. . . 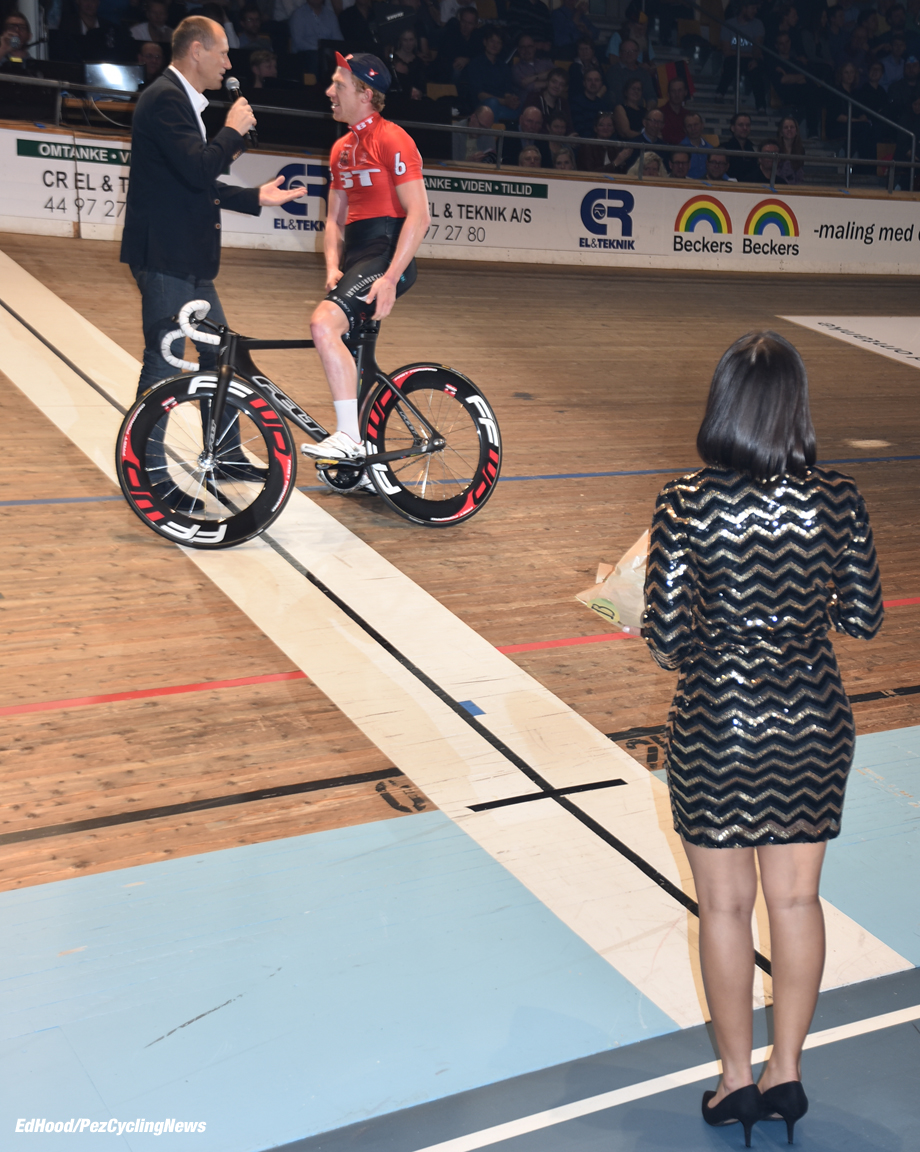 Devil; Daniel wins it, this is a good day – then goes up and jams with the band. And tell you the truth, it’s a bit of a blur after that; it’s 22:30pm Sunday now and Morpheus calls – I’ll tell you the story of the last three days come Wednesday.

Meanwhile, that bed sure looks good. . .