The 2015/16 ‘6 Days’ season has come to an end in Copenhagen and our man on the winter boards, Ed Hood, was working hard for his boys in the velodrome center. We pick up the story of the final three days of track action before the 6 Day circus packs its bags away for the summer.

In front of a packed house, late on Tuesday evening at Ballerup Super Arena, Jesper Mørkøv realized his boyhood dream of winning his home Copenhagen Six Day Race. In an excellent and wholly convincing finale the Austrians Graf/Muller and Belgians De Ketele/De Pauw threw themselves headlong into the attack but Mørkøv, partnered by the man who has partnered Jesper’s brother Michael, to victory on four previous occasions – Alex Rasmussen – matched every assault. 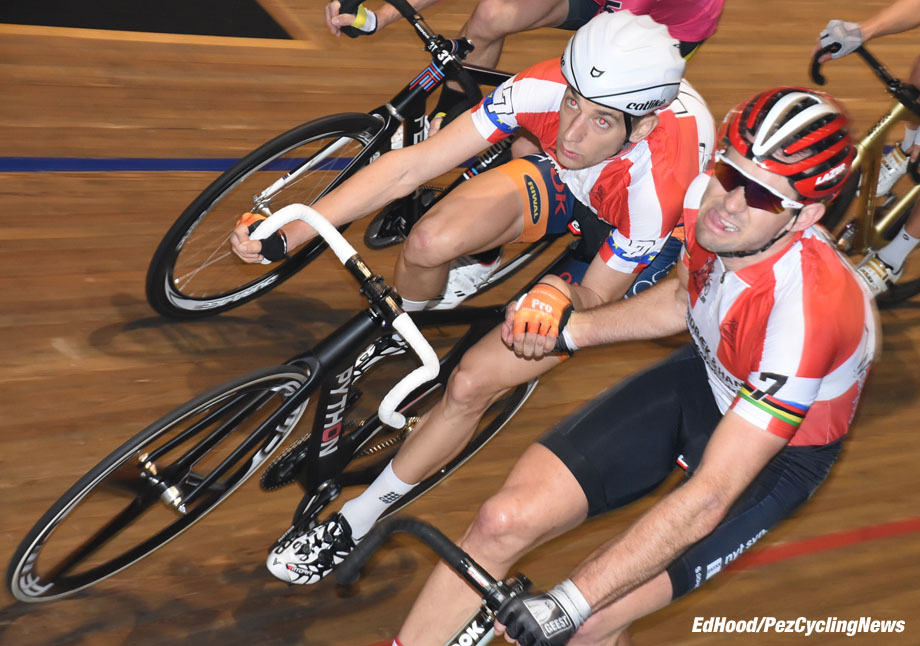 With all three teams on the zero lap, the Danes 349 points was well clear of the Belgians on 272 and Austrians on 164. But we left you after Day Three of the race last time; a lot of laps rolled under the Conti’s between then and midnight on Tuesday. . .

Day Four: In theory, Sundays in Copenhagen should be mellow with the prospect of a nice early evening finish; in practice, because you have to be up early for the lunch time start after Saturday’s ‘double shift’ by the time Sunday night rolls round the last thing on your mind is heading down town – that bed looks oh so good. And some of us have to knock out words and edit pictures. . .

Havik was back; so was Liss – albeit missing turns in the chase like he was allergic to hand slings with our boy Mathias; Kalz was there but Christian Grasmann has gone for good. But Mathias won the first Derny so morale in our cabin remains good; I’d forgotten that they play ‘The Race’ by Yello during the closing stages of the Dernys – it’s a nice choice. 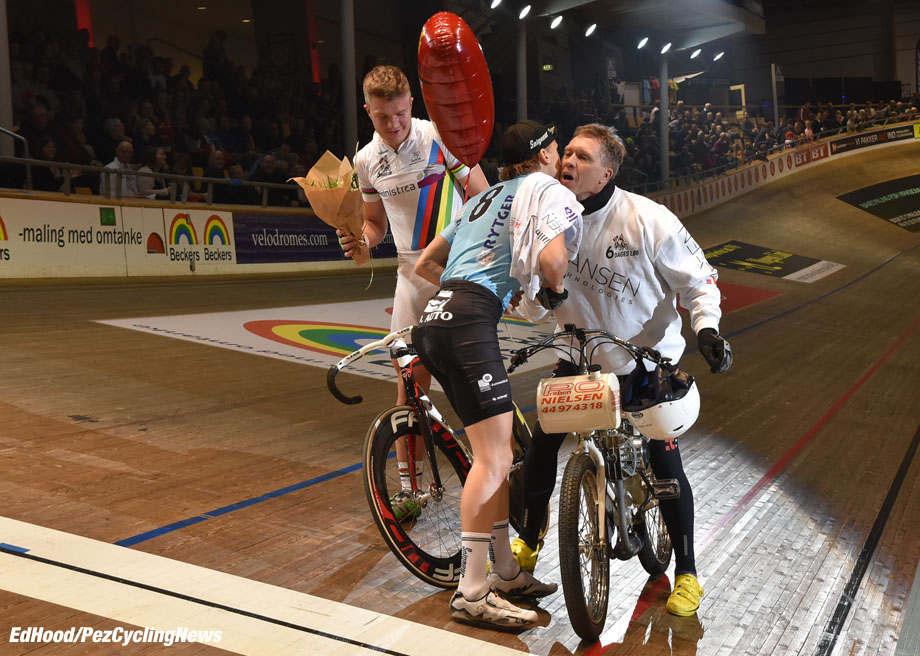 For some reason, Elias decided he’d present the prizes – and kisses – rather than the usual pretty lady. . .

And that Holloway Dude was at it again – when Jesper Mørkøv and Alex Rasmussen did 12.8 in the flying lap we figured it was over. 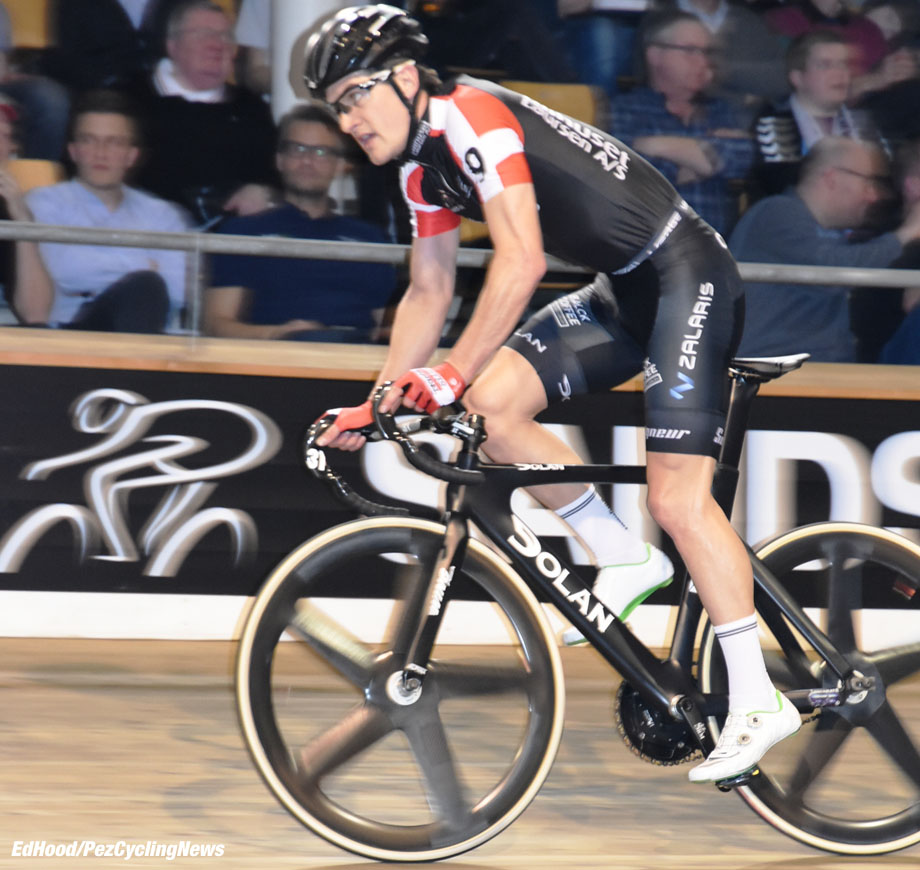 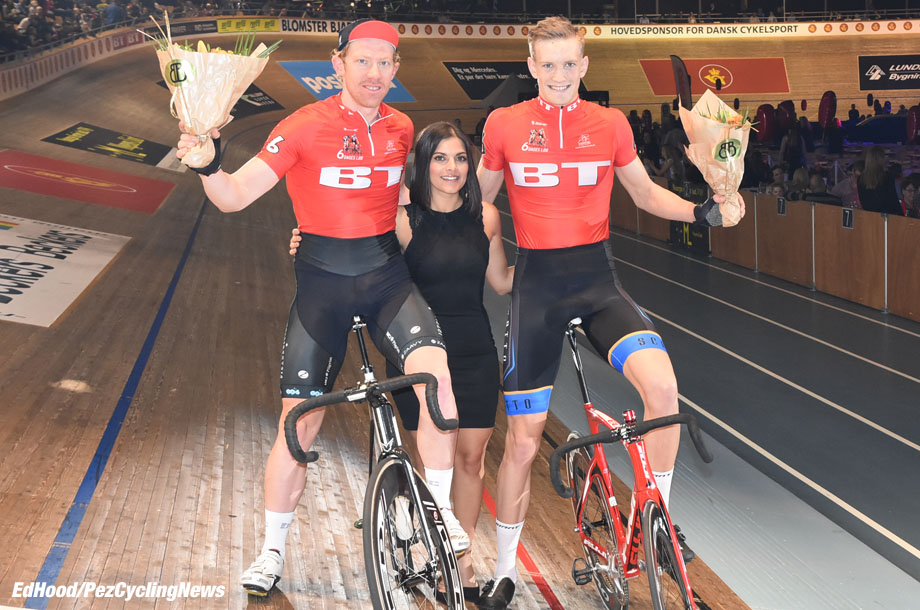 But – our ‘Dan the Man’ hurled ‘Big Danish Dan’ in and despite the tall chap being a little high off his line they did 12.8 shading Jesper & Alex. The track record is Kalz, 12.514 – if our Dan goes up one tooth on the chainring and big Dan can hold that bike down on the line. . . 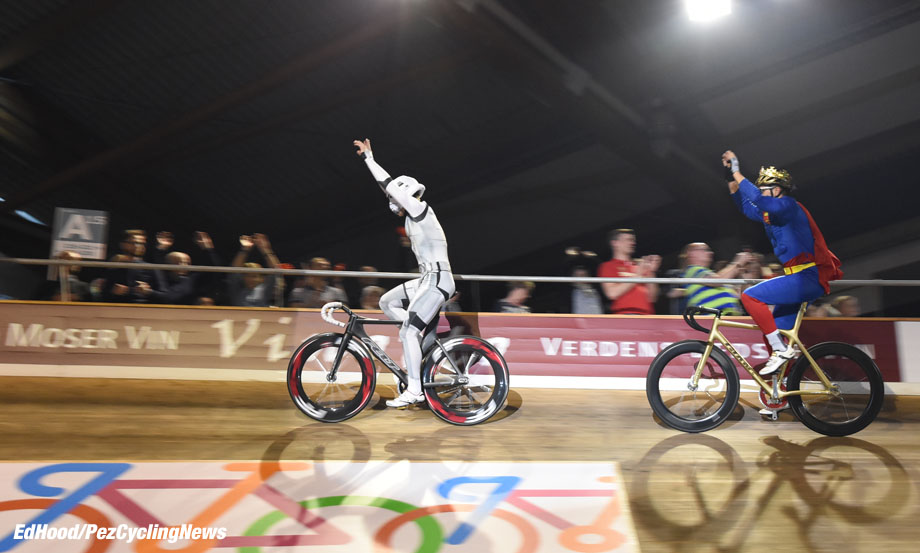 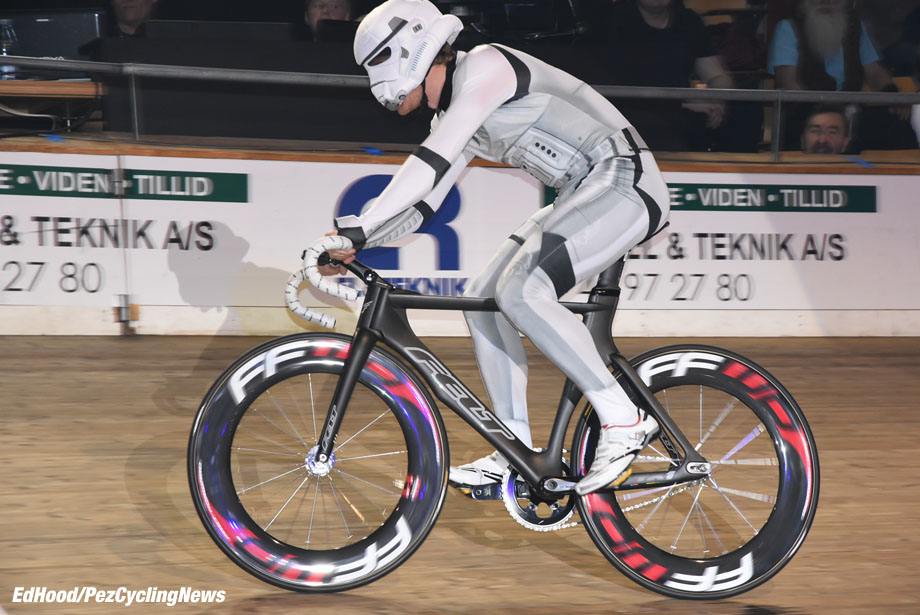 The ‘Balustrade’ sprint prior to the final chase couldn’t quite make its mind up on the theme – ‘The Man of Steel’ or ‘The Force.’ Strangely, neither Holloway nor Barth were anywhere to be seen when I took these pictures – daftness but the crowd loves it. And I never get tired of Dario G and ‘Sunchyme.’ 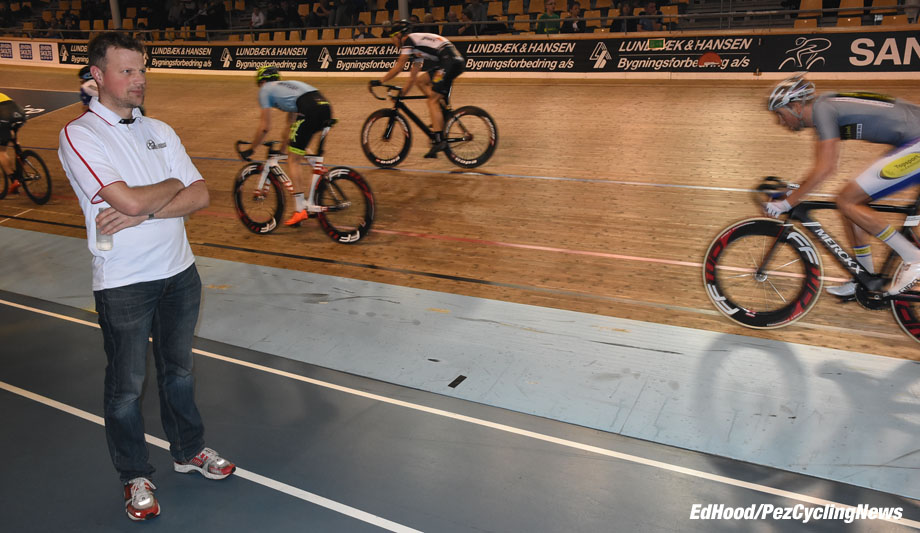 The chase wasn’t savage; a good clue to the severity of a chase is how many come in for drinks – and there weren’t many thirsty boys up there. 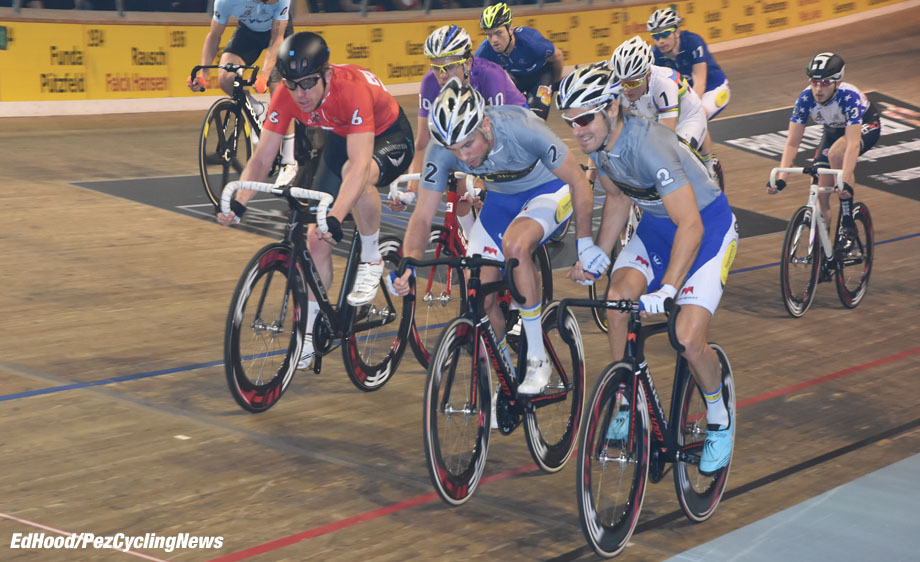 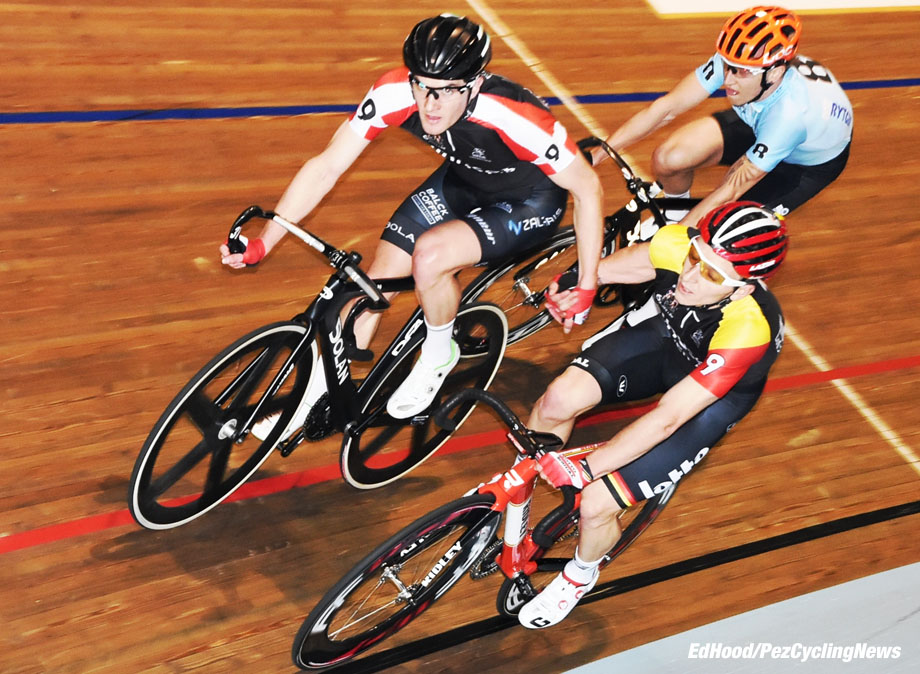 The chase went to Jesper and Alex but we still fancy the final battle will be between De Ketele/De Pauw and Hester/De Buyst. If I had to bet money on it I’d go Hester/De Pauw but you know those Belgians. . .

It’s the BiG handicap madison tomorrow night; always a great race – can Holloway make up for being flicked by Dany Stam in this very race in 2010?

Day Five: ‘De Buyst is out!’ Was the statement which sent shock waves round the staff; he looked OK to us at breakfast but apparently developed a fever and grabbed a flight straight back to the FlatLands. Marc Hester will be as sick as the proverbial parrot – the Dane now goes with Otto Vergaerde; same Topsport team and nationality as De Buyst but with less watts. We were chatting to Christian Grassmann about his illness; ‘I had an ear infection – I slept a coma sleep for two days, it was great!’

Our boy Mathias now rides with one of our other Danes, Elias; sickness really has caused havoc with the race – heavy duty for the organizers. The partner swapping only adds to the nervousness among the guys; tonight sees the 75K handicap madison with the ‘Bigs’ – De Ketele/De Pauw, Muller/Graf and Mørkøv/Rasmussen giving away nine laps to Blaha/Vendolsky with the rest somewhere in between. The end result counts for the overall standings so there’s no room to mess – albeit, temporary national allegiances count for a lot in this race. . .

Looking at the handicaps, right away I thought Pieters/Bigum with seven laps on the Top Guns were a good bet. 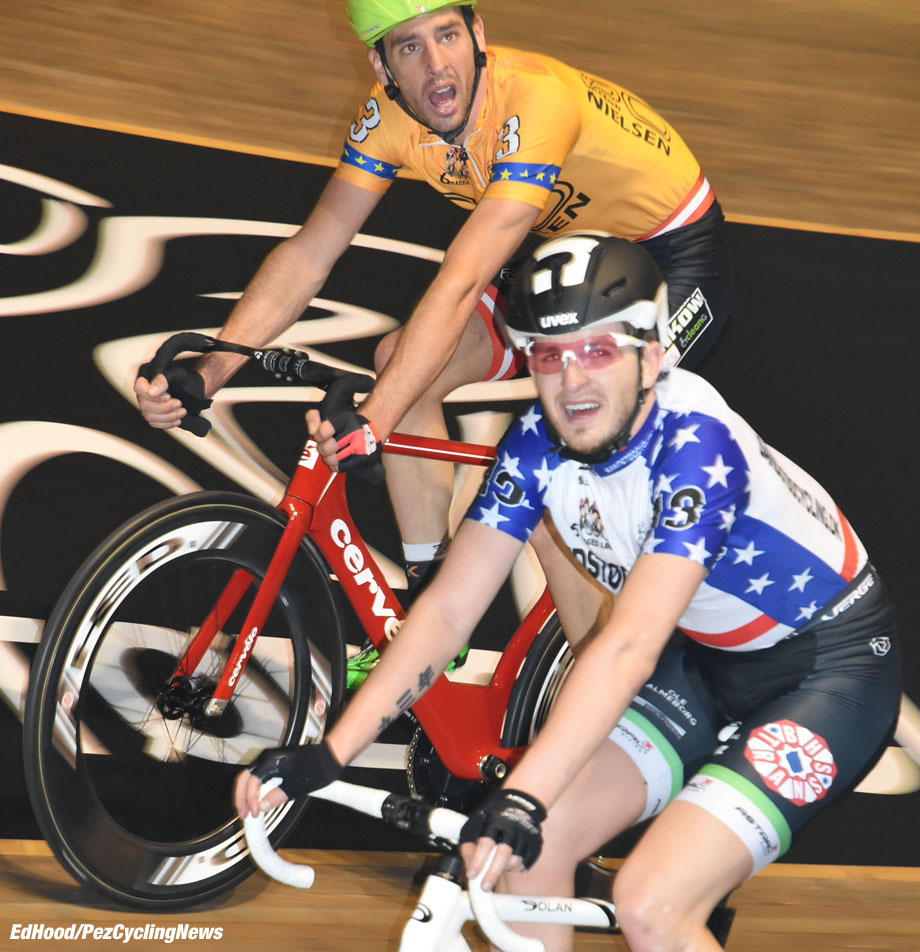 Daniel reckoned Bigum would crumble but the 22 year-old Dane has been around the UiV U23 races and sixes for a few years, he’s no novice and Pieters is a big strong boy. In anticipation of some hard, straight racing there was a good crowd and our Germans Hans and Seb got the night off to a good start for us – winning the devil. 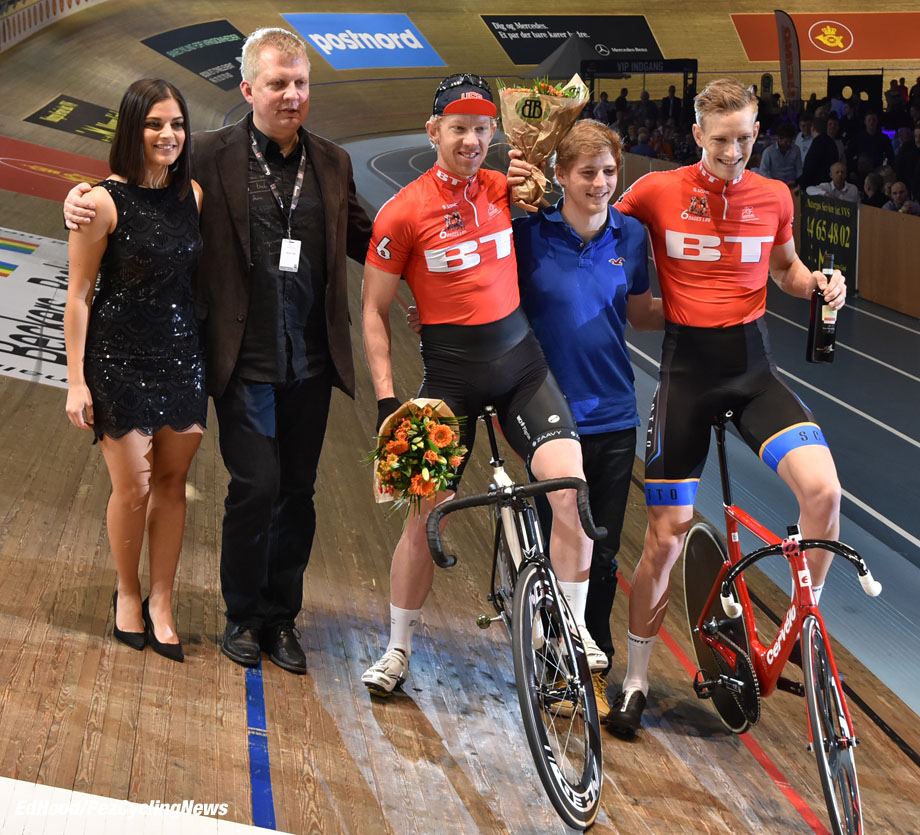 The flying lap and Rasmussen/Mørkøv go 12.8 but the Two Dans are motivated, Holloway has the approach analyzed and Hartvig holds his line better – and 12.7 when the clock stops. Nice one. 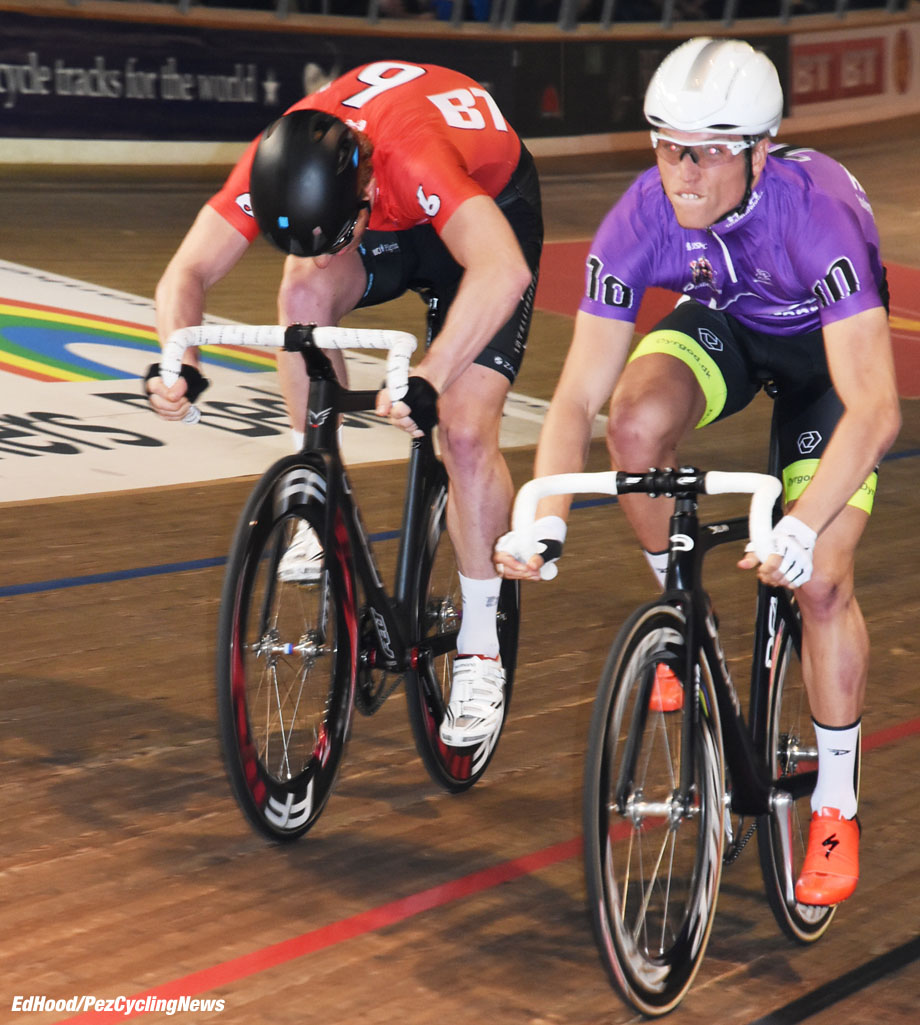 Fred wins the longest lap – again. This cabin is on fire tonight. The Derny, nada; the devil and Daniel points out those bound for Hell – ‘til Lucifer catches him out too but the consolation is that the sounds come from Junior Senior, ‘Move Your Feet’ – a great racing tune. Time for the band; and moving on quickly it’s the 500 TT but we have no one on the boards. Then it’s time. The lap board says ‘300.’

Cara Mia’s bongo’s rattle and it’s 75K with very little time to mess around; nine laps is A LOT to make up. The music is great with Kiss, Alcazar, The Fratellis. . .

The big teams hammer away but it’s apparent from early on that Pieters/Bigum are the men to beat, defending their advantage jealously. 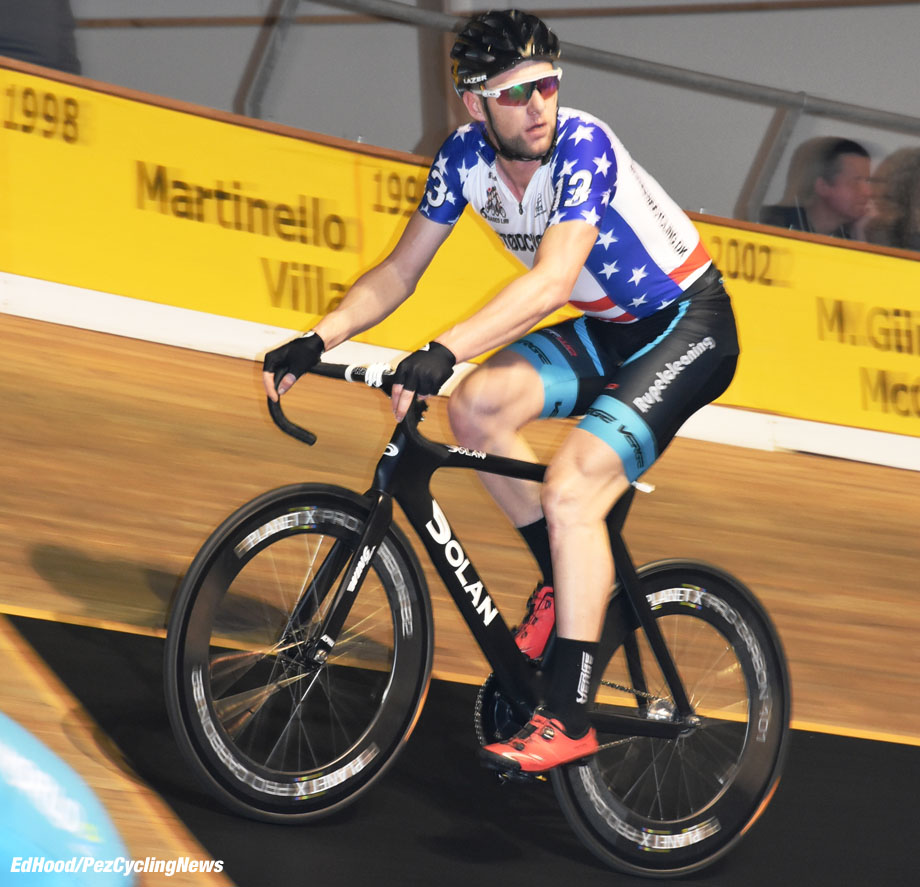 Pieters has good genes; he’s the son of former Netherlands Pro Road Race Champion and Paris-Tours winner, Peter Pieters who was also a solid track rider with multiple Dutch titles and a bronze in the Worlds Pro Points Race to his credit. Roy rides for Etienne Illegems’ (his soigneur here) ILLI-bikes Cycling Team in Belgium, is a multiple winner of Dutch track titles and had 11 wins on the road last year including the Memorial Danny Jonckheere in Oudenburg. 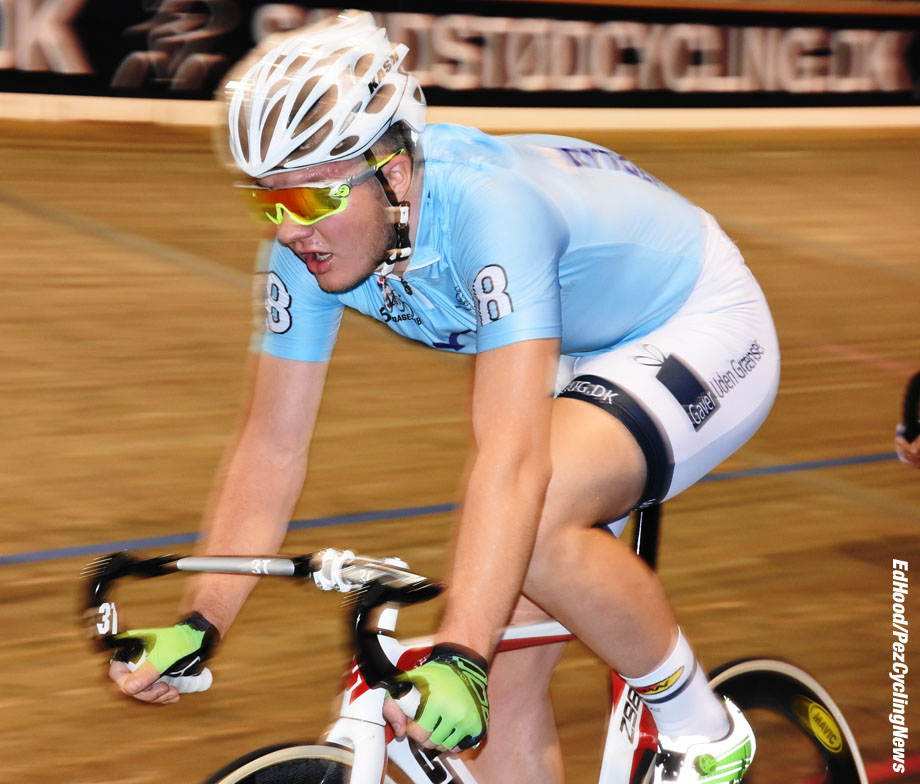 Mathias and Elias were at one lap on them for a long time and but for a slip might have got up; but it wasn’t to be and there was no help coming from other people – pro bike racing can be like that. 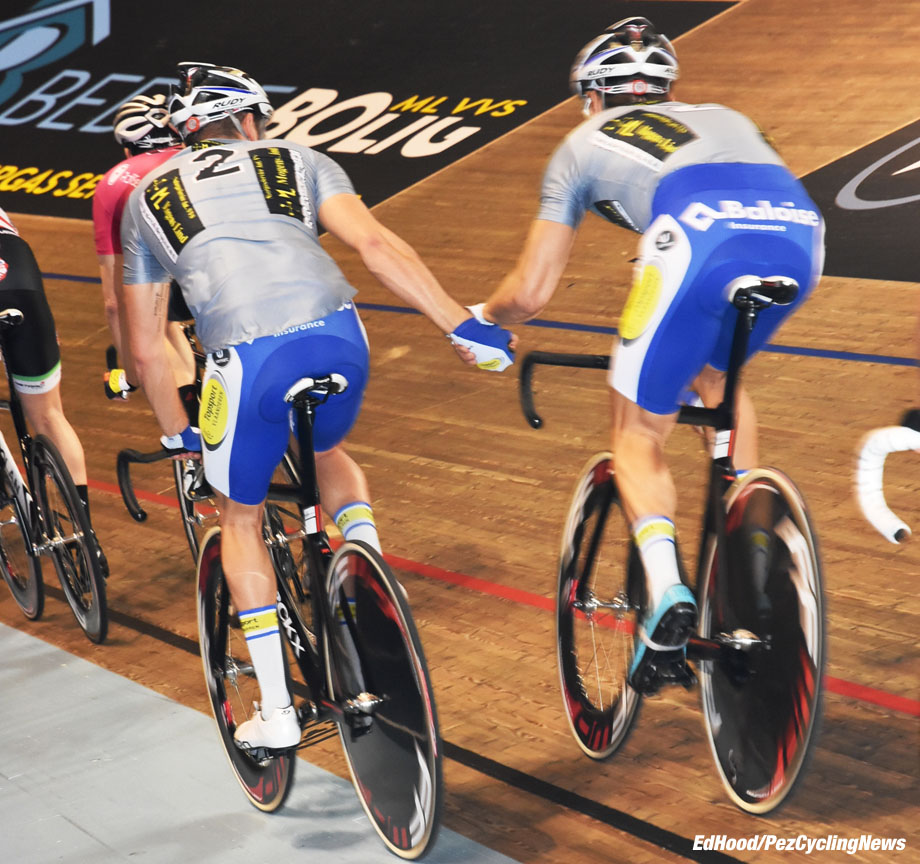 With 30 laps to go we could see that Mathias/Elias couldn’t get the lap nor could Czechs Blaha/Vendolsky – and it was too late for De Ketele/De Pauw to take back two. Time to pack up the feed bottles, shake Etienne’s hand and get ready for the boys coming in – some you win. . . 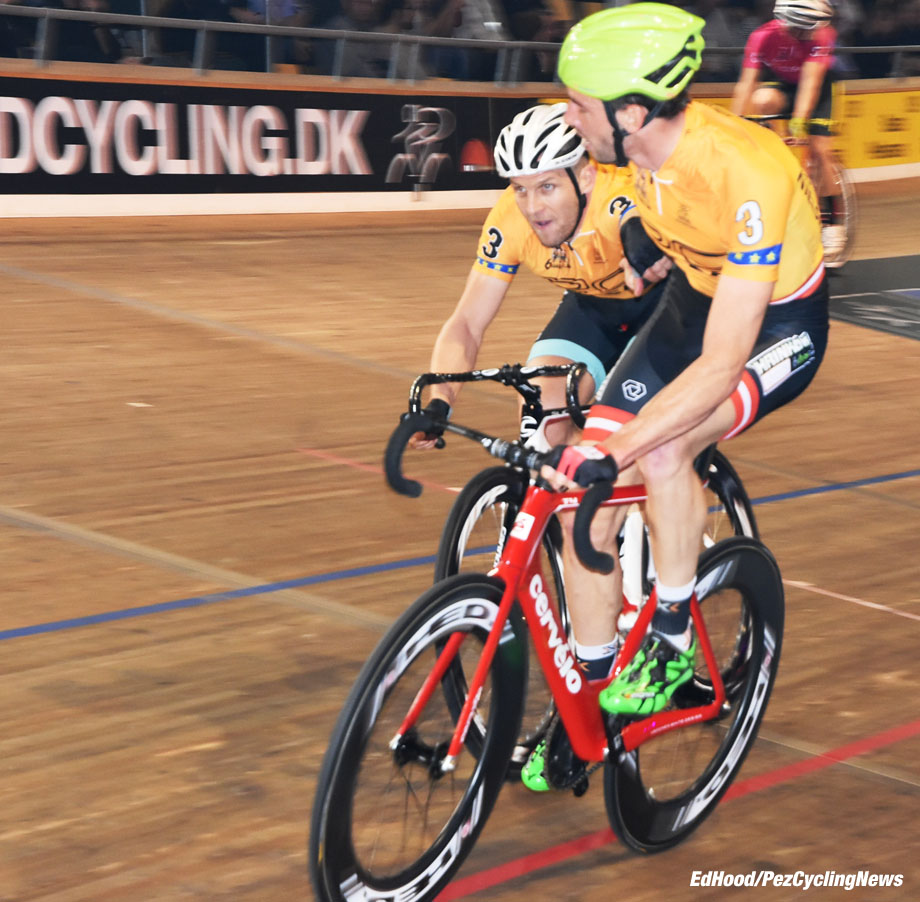 It’s the last washing tonight and last chase tomorrow – there are no obvious winners but those Austrian Dudes are looking hungry to us. . .

Day Six: I made the mistake of leaving my camera lying around. 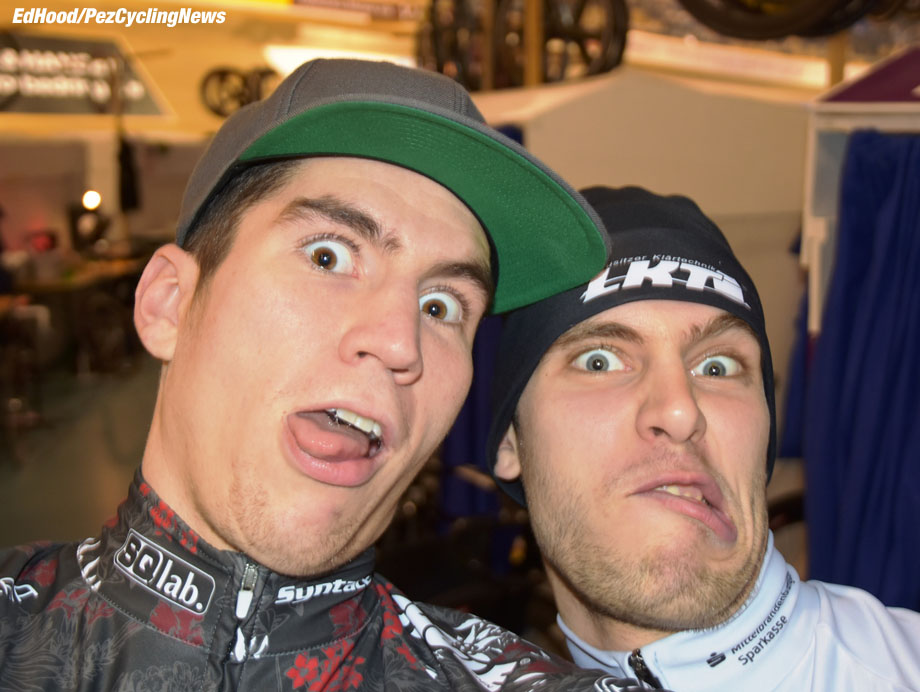 Hans decided that he was going take over my job as team photog – ‘don’t quit the day job, kid!’

The sprints – and flowers for the cabin, I think it was Mathias who did the business. 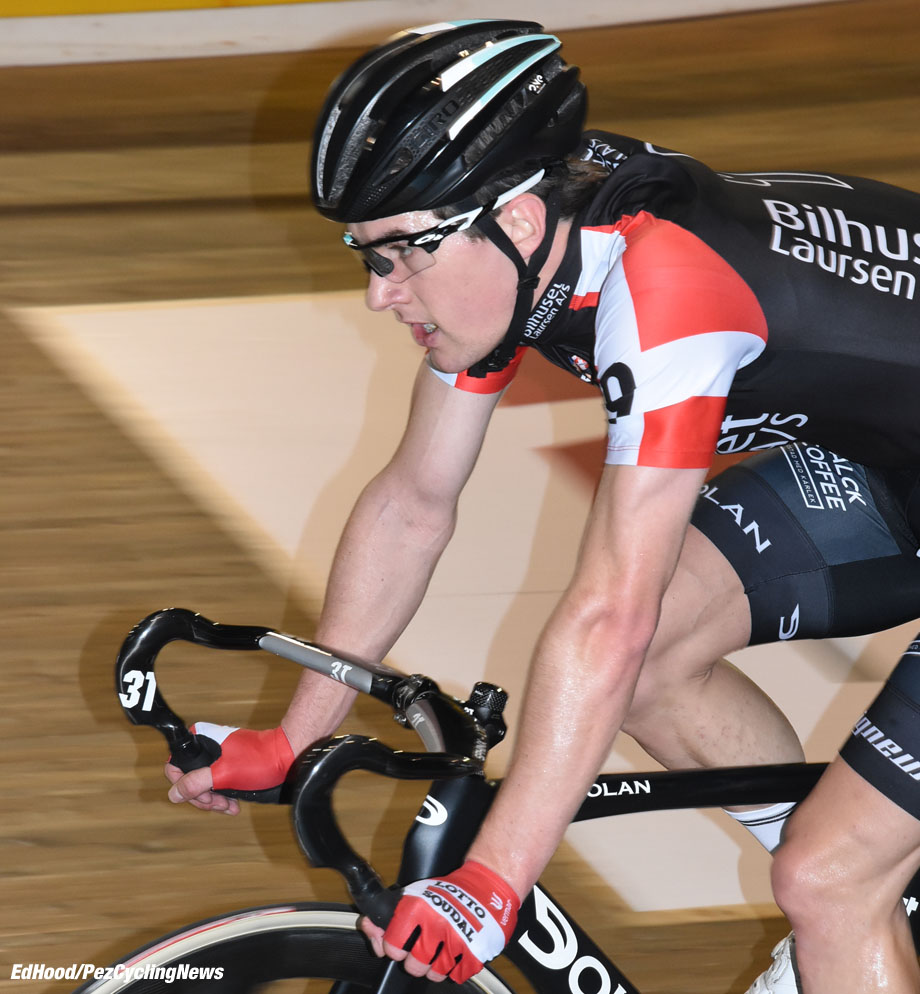 The 30 minute chase was nippy for a ‘small’ chase with Marc Hester laying down the marker that he’s ‘the man’ aided and abetted by Belgium’s Otto Vergaerde. The longest lap and Daniel wins it – again. Hans and Seb win the team devil – it’s not been a bad six day at all for our cabin.

We have no one in the 500 TT and Hester dominates the Derny. There’s another devil and then it’s time. . .

The Two Dans are going for the lap record – our Dan has gone up one tooth at the front, Big Dan is on 55 x 13, a Mavic five spoke front and has an aero lid. Our Dan chills in the cabin, getting ‘in the zone’ – we’re just about as nervous giving the Felt a final polish. He trickles the slow running boards with his big amigo in tow, we watch the times, nothing special ‘till De Ketele De Pauw go 12.855. 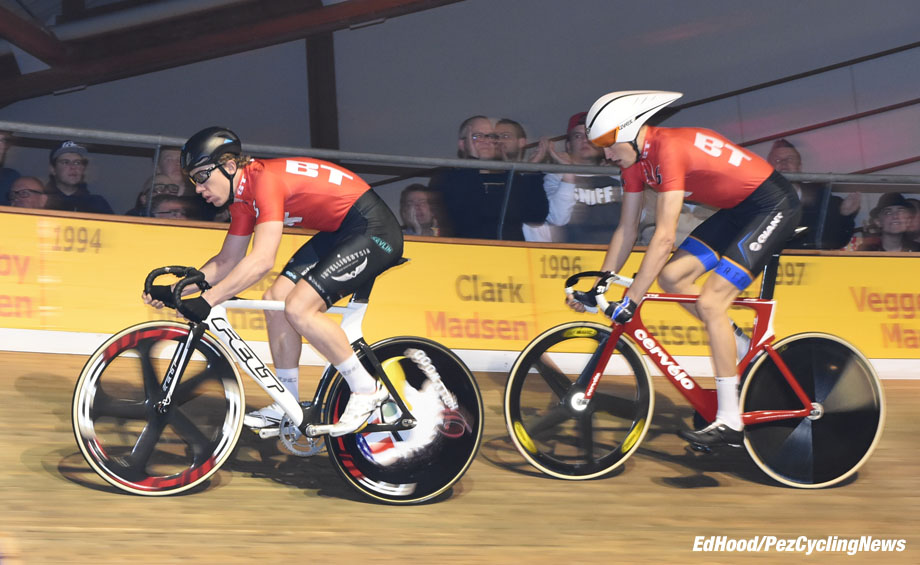 Dan has the approach lines dialed in, they track the fence – the organizers have given them an extra lap on the wind up to build momentum. They have the crowd well behind them, Dan dives and the sling is good – it’s quick, very quick. You don’t need a watch to tell you that – but you need one to set a record. 12.554 flashes the big display, way quicker than the Belgians BUT four hundredths of a second off the track record. 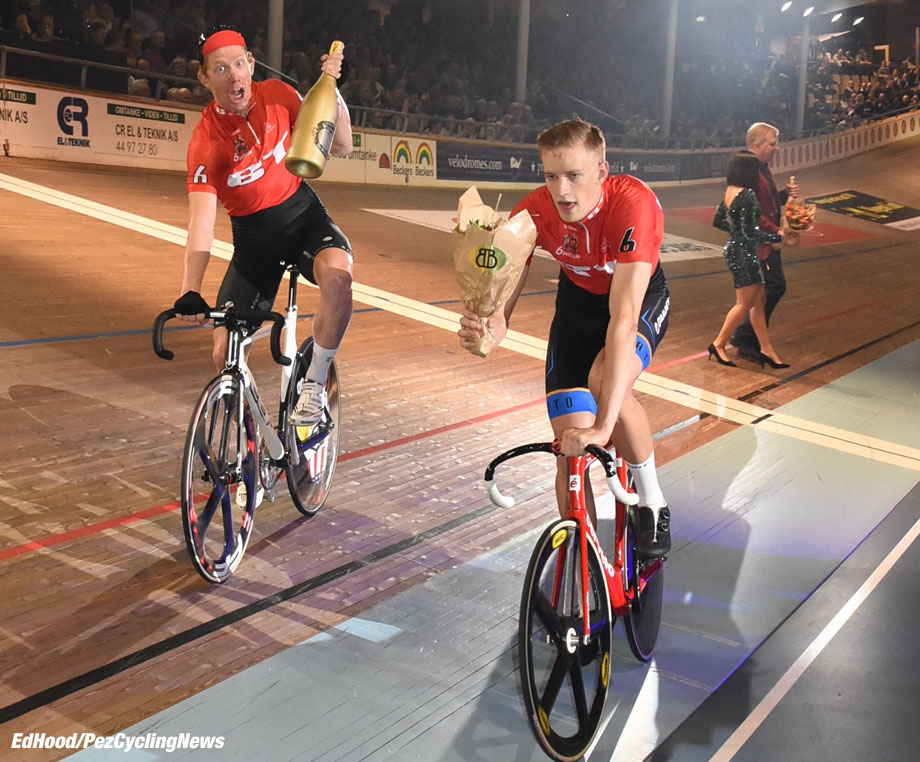 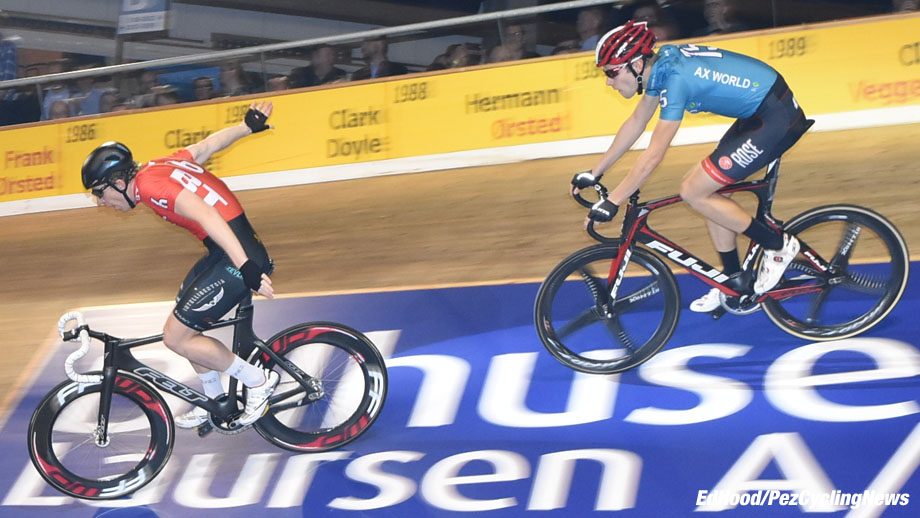 But you can’t keep a good Dan down and he’s soon back up there leading the string in the balustrade sprint. Cara Mia thumps out for the last time as Martyn and I have to start breaking camp. On the way back from the cabin I do a ‘double take’. . . 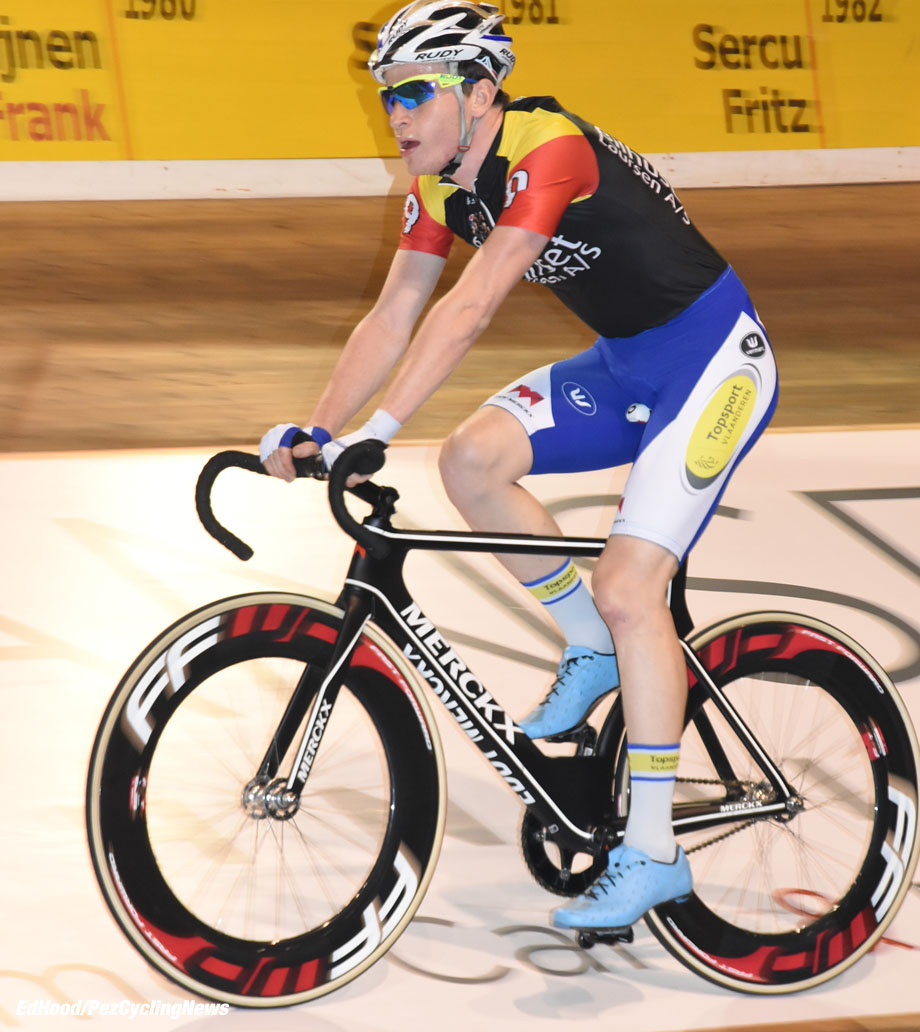 Otto Vergaerde and his girl friend pass us in the corridor. He’s out, sick; Hester will be desperately disappointed and so will the organizers, illness has savaged this event and it’s now a three horse race. 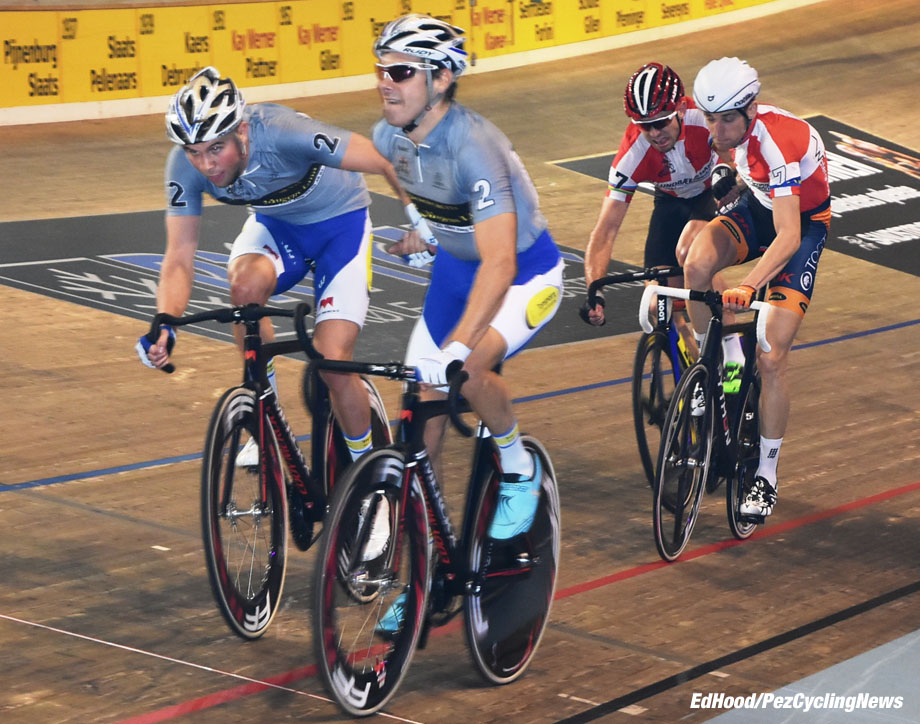 Despite the depleted field, it’s a good chase with the ‘Big Three’ knocking lumps out of each other. 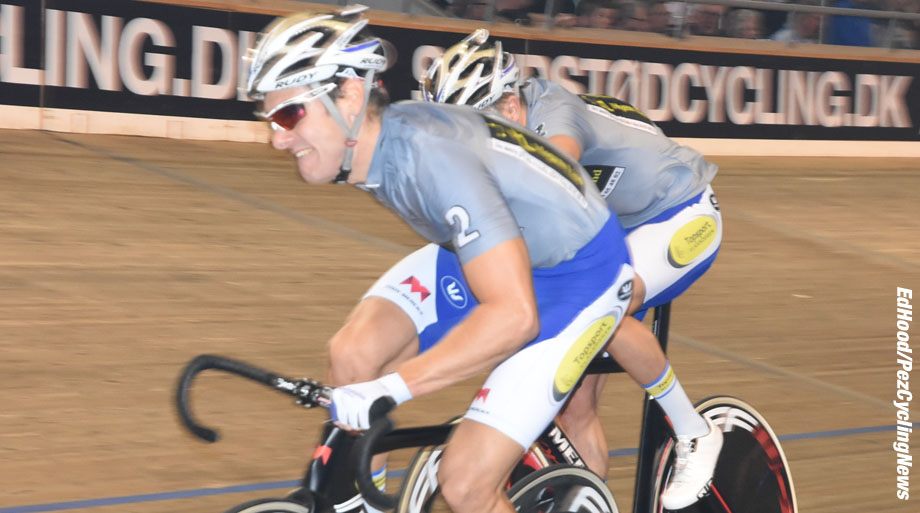 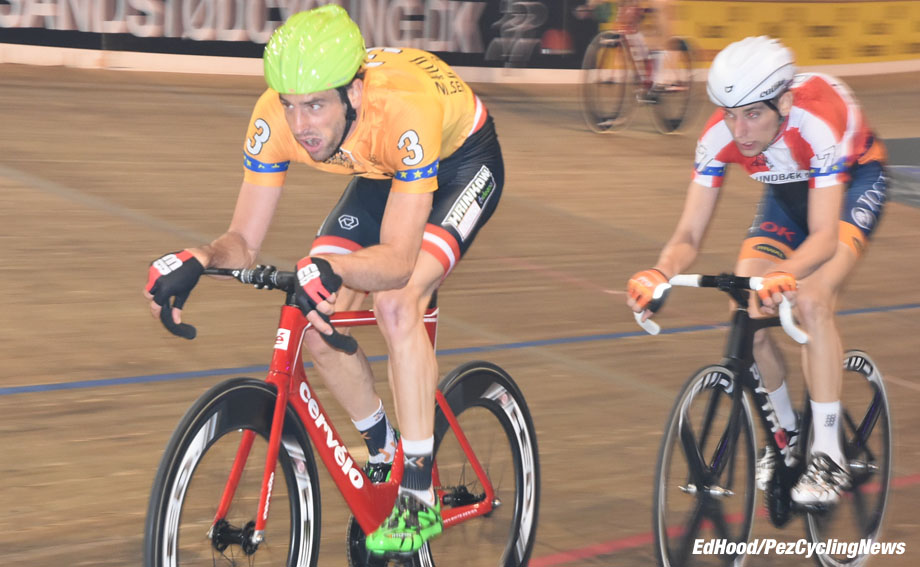 De Pauw has been sick this week – as has our Seb – but despite that he and De Ketele keep firing those salvos and so do the gritty Austrians; not spectacular just hard as nails, old school, riding relentless big tempo as the little fish grit their teeth and try to survive the storm.

But Jesper wants it bad, Alex is as strong as a bull rhino and it’s ‘Par # 7’ honoring the Danish flag yet again. 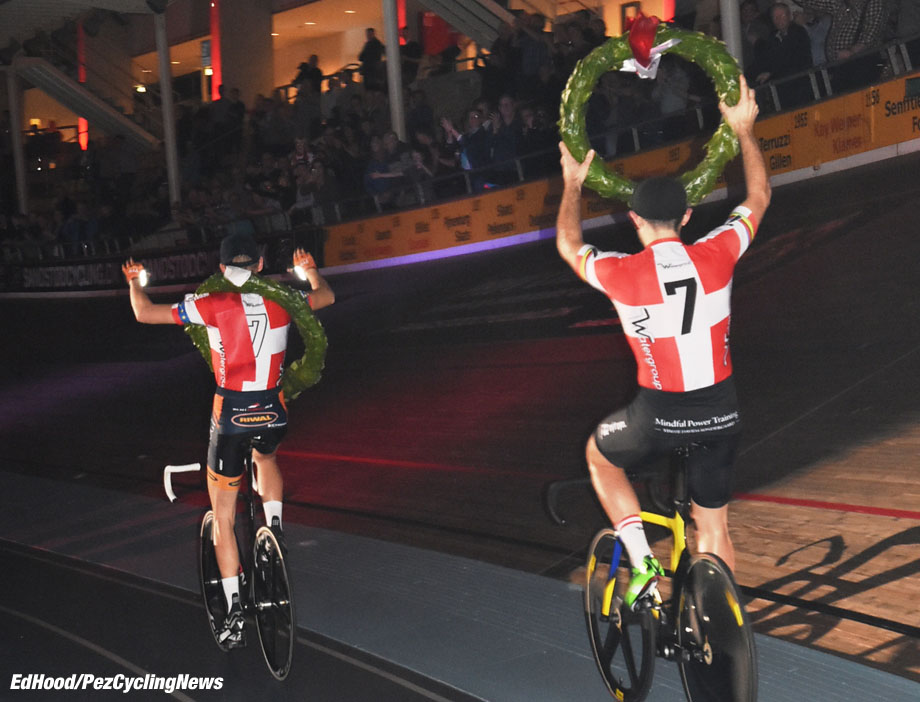 And yes Cara Mia, we MUST say goodbye, darling – load the camper, go to the after race party, get two hours sleep, head for the airport and the 2015/16 six day season is over.

See you in London?