Confounding all the predictions it was Arnaud Demare (F des J) giving France her first Primavera win in 21 years timing his sprint perfectly to leave all the pre-race favourites flat footed on a glorious day on the Ligurian Riviera. Sky’s Ben Swift (GB) proved his third spot in the race in 2014 was no fluke as he took second spot with former Belgian Champion Jurgen Roelandts completing the podium. 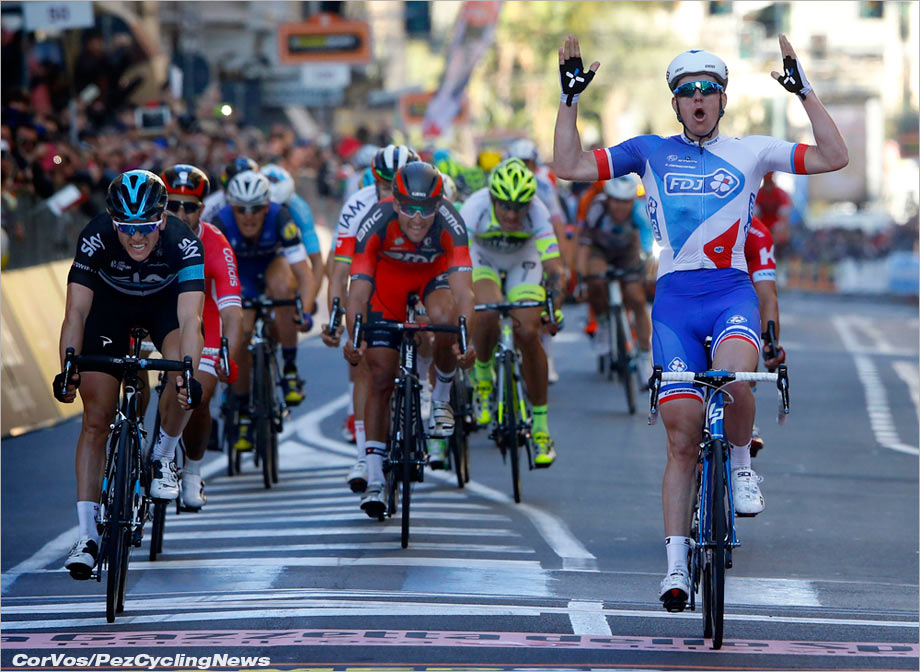 It’s 10:00am Central European Time on Saint Joseph’s Day and ‘roll out’ time – Sanremo is 300 K away but the first nine K are neutralised through the streets of Milano and everyone can pretend they’re relaxed for a wee while. The sun is out and we have one just non-starter, Hofland of Jumbo; to give us a field of 199 riders.

Kilometre zero is passed and it’s ‘break of the day’ time – now let’s see.. yes, that’s perhaps 15K in and we have around a dozen clear, we’ll see if it gels before we list names. 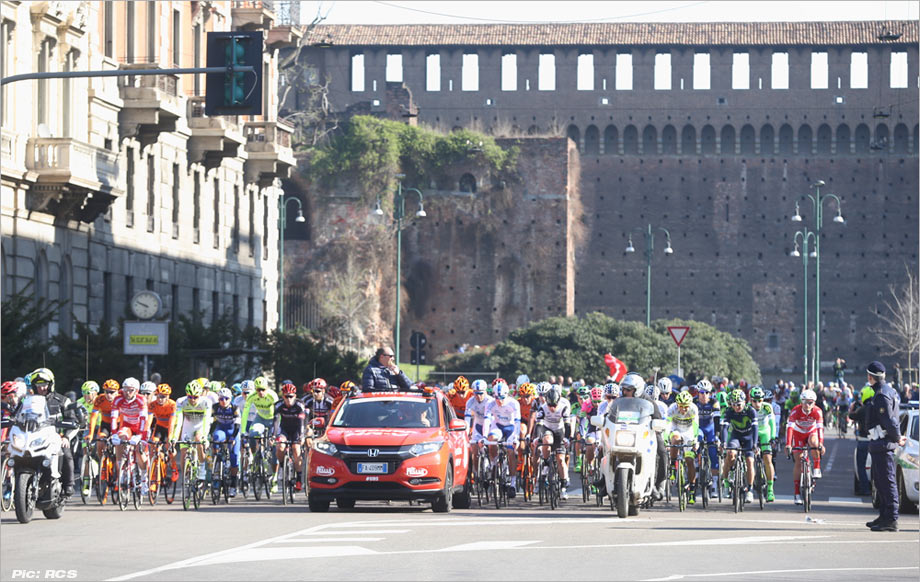 OK, two minutes clear, that looks like it; there are 11 riders in the move…

Good to see Peron there for Novo Nordisk; team boss Phil Southerland will have a smile on his face as the lead tops four minutes then rapidly, ‘dieci minuti’ – yes, they’re in it for the long run with a ten minute advantage.

The word is that there’s a landslide further along the percorso on the coast road; they’re going to divert the race via the motorway as the peloton starts to chip away the lead – it’s around eight minutes with 220 K to go.

The organisers have confirmed; Due to a landslide on the Milano-Sanremo original race course in between Genova Voltri and Arenzano, the Race Direction together with the Police Support Officer decided to divert the race onto the A10 highway, entering in Genova Voltri and exiting in Arenzano to rejoin the original course. This detour is now officially part of the race course. 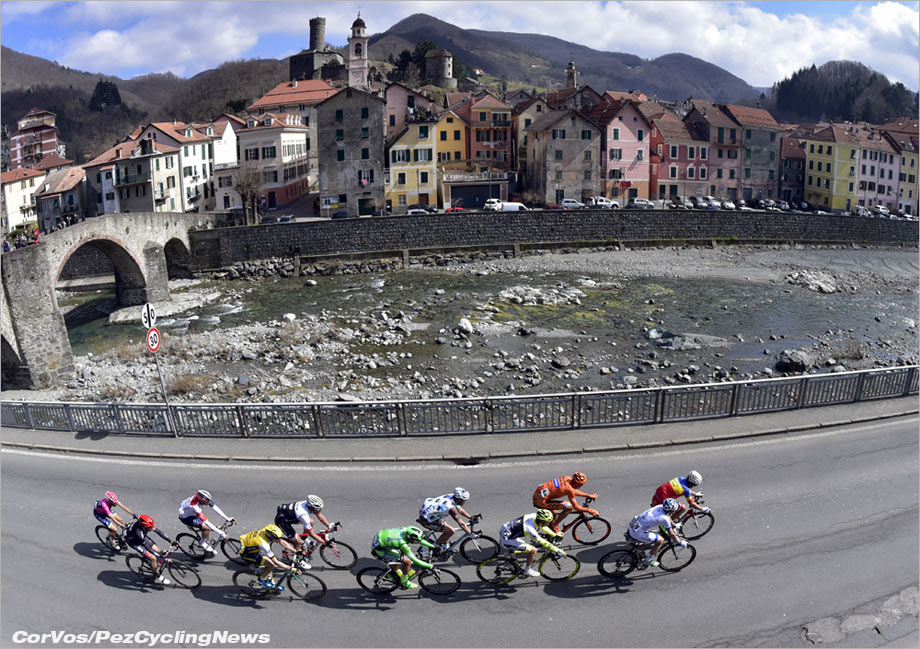 The break rolls through Campo Ligure on its way up the Turchino.

At least it’s not snowing.

We’re well inside 200 K to go now and the lead is steady around eight minutes as the Turchino nears; it’s not a steep climb but it’s long and chips away the watts reserves inside every rider. The gap is going back out to nine minutes as Katusha decide to get involved a little more at the head of the peloton.

Half distance, the Turchino Pass and the gap is seven minutes which sounds like a lot but when that peloton starts to surge along the Ligurian Riviera it’ll melt like a snow flake on the river. The advantage is six minutes, then five now they’re on the coast with 100 K to go and the Primavera living up to it’s name – ‘Springtime’ with the sun smiling upon the Ligurian Sea which is on it’s bluest, best behavior.

The peloton is chipping away the lead but not dramatically – Tinkoff, Cofidis, GreenEDGE, QuickStep, Dimension Data all have men on the front but there’s no desperation, yet. The 11 up front are spelling very nicely through the seaside tunnels with the peloton in a long, long line – giving fab foto opportunities. 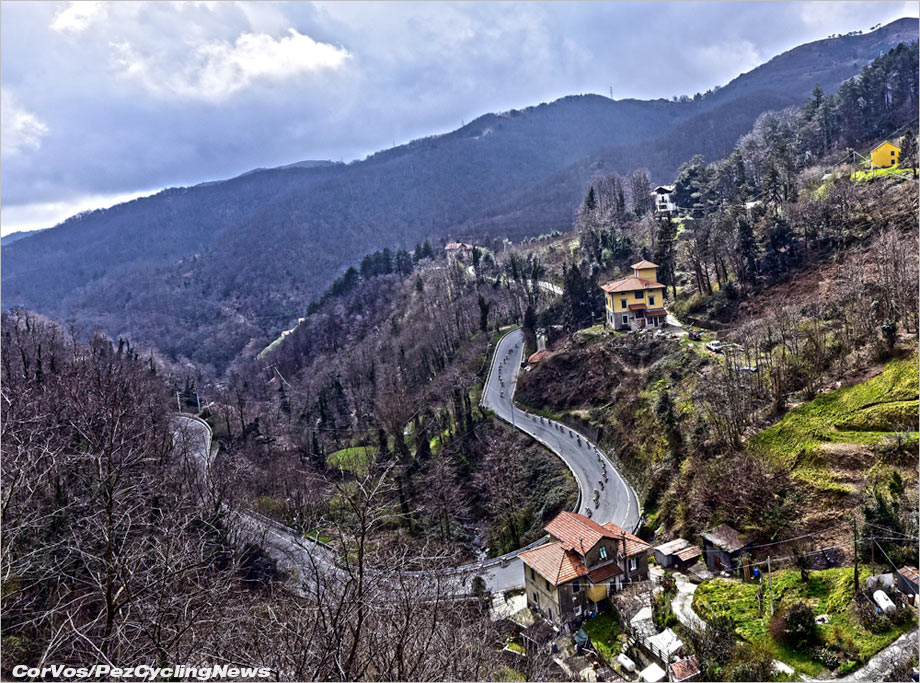 Descending the Turchino Pass – you can smell the salt air now.

We have 84K to go with the first of the three Capi coming around the 50K to go mark – the break’s lead is on the four minute mark, now.

The lead is 3:45 with 70 K to go as they flash through the quiet coastal holiday towns in the sunshine with the sprinters’ teams still on the front of the peloton with Tinkoff the predominant jersey.

Another 10 K are done – 60 K remain now and the lead is just over the three minute mark as the 11 desperadoes continue to spell sweetly – that’ll change come the Capo Mele.

‘Alassio’ says the town sign on the rock face and the Capi aren’t far away with Tinkoff powering the bunch as next up lovely Laigueglia comes and goes. There are crashes in the peloton – nervous times and Zurlo of Lampre is out.

The Capo Mele – and the lead is two minutes as GreenEDGE and Astana come to the fore at the head of the bunch with the seconds evaporating for the leaders. Off the Mele the 11 have regrouped – respect – and now it’s the Capo Cervo with the lead at 1:40 as a Lotto train moves up on the inside track with big Adam Hansen to the fore.

The break is off the Cervo with just the Capo Berta to come, it’s the toughest of the three Capi; these breakaway boys are very well matched – many an escape would have collapsed on those two drags.

The Berta and the breakaway boys finally begin to split as Coledan leads them up – still looking smooth but the gap slides down towards a doomed 60 seconds as the tifosi let off flares – crazy.

The break is depleted – eight riders left – but has crested the Berta – however the lead is only 45 seconds as Tinkoff continue to drive. 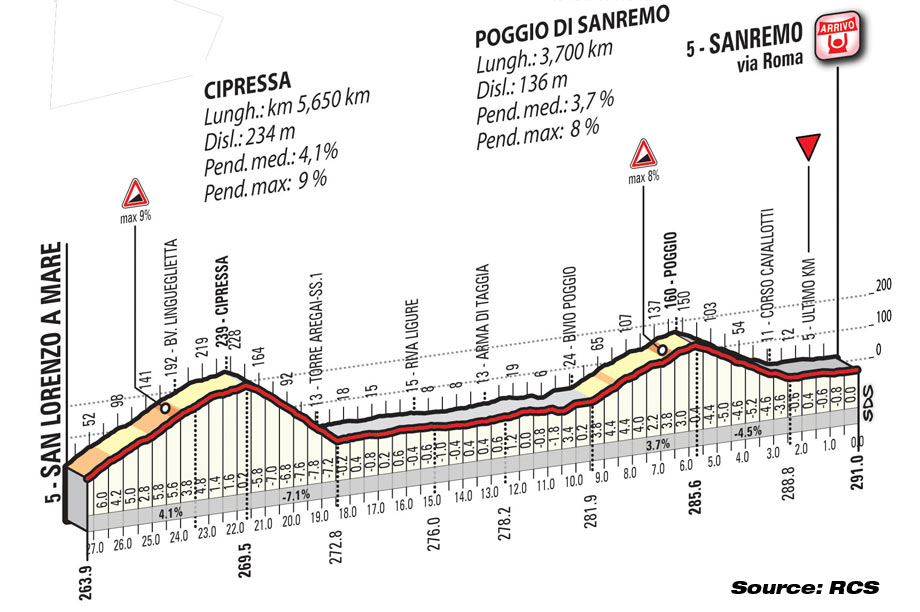 It’s the Cipressa next and the inevitable madness into that right hander at the bottom. Coledan bolts from the break, Tjalingii goes with him as the nasty crashes continue back in the peloton – and now it’s Barta and Maestri who have slipped the break, too.
Bagdonas is done, the peloton hurtles past him without ceremony – the good weather means it’s still a huge bunch rampaging along the coast. Sky’s Kennaugh and Thomas are on the deck, favourite Matthews (GreenEDGE) too – it’s just so nervous and dangerous back there.

The break has gelled back to six with 32 seconds advantage as Jumbo, Giant and Cofidis get to the front to keep their men safe from the madness.

We’re on the Cipressa as Kluge pops, behind, Matthews tries to get back – it’s unlikely. Astana, Sky, Katusha, Lotto are all there as Barta refuses to acknowledge that his day in the break is done – he’s a bear of a man.

It’s over for the break – respect boys – as Astana and Tinkoff drive it and there are 25 K to go. The peloton is stretching as another crash decks yet more riders with Kreuziger the man on point for Tinkoff. Cav pops spectacularly as Kreuziger continues to make it look easy; Visconti goes for Movistar, Stannard (Sky) covers it – there’s the bell tower at the top, they’re over but it’s just an 11 second lead.

The coast road and there’s just one hill- the famed Poggio – to go as Oss (BMC) Sabatini (QuickStep) and Montaguti (AG2R) bridge up to the Anglo-Italian duo – five up front with 18 seconds. 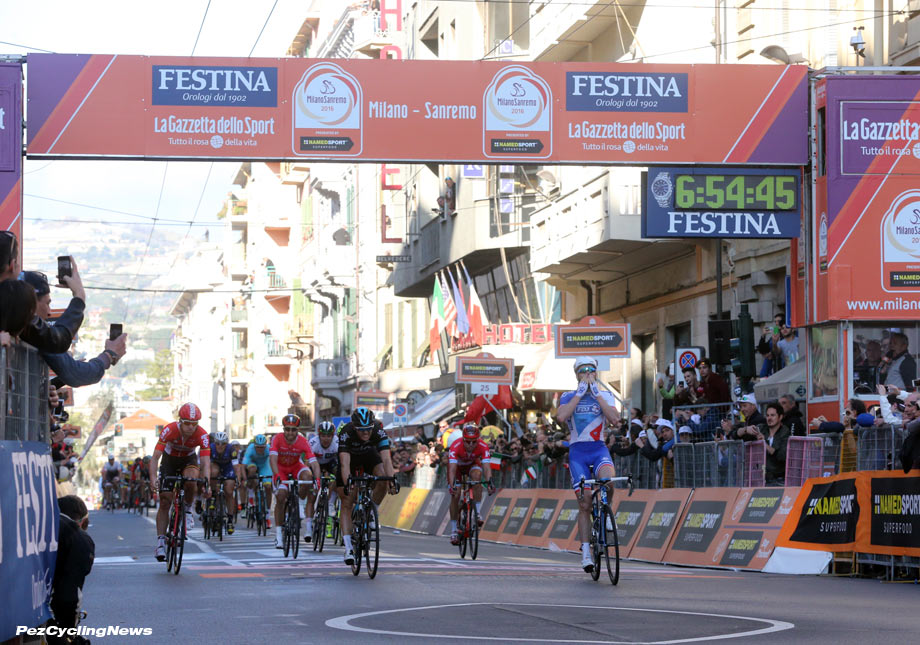 Stannard thumps the 11 as Sabatini cruises in the slipstreams – he has Stybar and Gaviria behind. Katusha put five to work with the lead at 15 seconds; and as quick as it started, it’s done – compatto.

Androni, Astana, Tinkoff lead the charge into the right hander to the Poggio – they’re on it with Luke Rowe leading for Sky. Matthews has made it back but has much to do to get back to the business end – it’s bunched up, far from warp speed.

This is not what we’re used to seeing on the Poggio – Kristoff and Bouhanni will be loving this. Southeast attack – Fedi, he’s getting the TV time but doesn’t look a winner. Gallopin (Lotto) goes next, Kwiatkowski (Sky) counters and gets the gap – he’s over the top with Nibali (Astana), Sagan (Tinkoff) and Cancellara (Trek) all on his case. 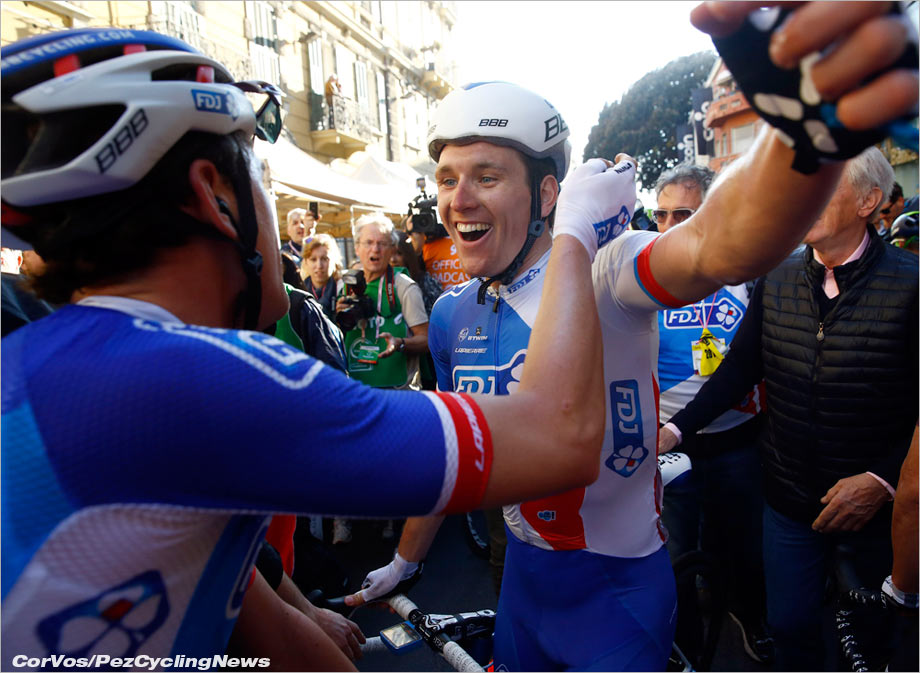 They’re looking at each other in the chase group – too late for poker guys – as 2014 World Champ Kwiatkowski takes all the risks and crouches low on the top tube. He has four seconds as he comes off the Poggio – Cancellara goes, huge power from the Suisse and Kwiatkowski is history. But then they all sit up.

Boasson Hagen for Dimension Data goes now, Van Avermaet (BMC) covers it but they ease too; it’s going to be a bunch sprint. Gaviria looks oh so comfortable for QuickStep – but BANG ! the Columbian is down within sight of the line as Roelandts goes long for Lotto; Swift (Sky) looks good now – but Demare is coming long and late and strong and set to become part of the Legend.

Demare! from Swift and Roelandts.

Great finale even if I didn’t tip one of the first three – we’ll see if I get it right next week.