Ed Hood is back in harness working under the ‘6 Day’ track boards of Berlin. It’s been a hard week of graft running after is riders, but Ed has found time to give us his thoughts on the German velodrome battle, with photos of course.

Yes, PEZ is back at the ‘races to nowhere’ – you should have read the PEZ summary of the season so far – we pick up the story in Berlin.

Riders:
First off let’s look at who may be standing atop that podium on Tuesday night. Winners of the first two ‘Madison Sports Group’ series six days of the season, London and Amsterdam, Belgiums Kenny De Ketele and Moreno De Pauw start as favorites here. 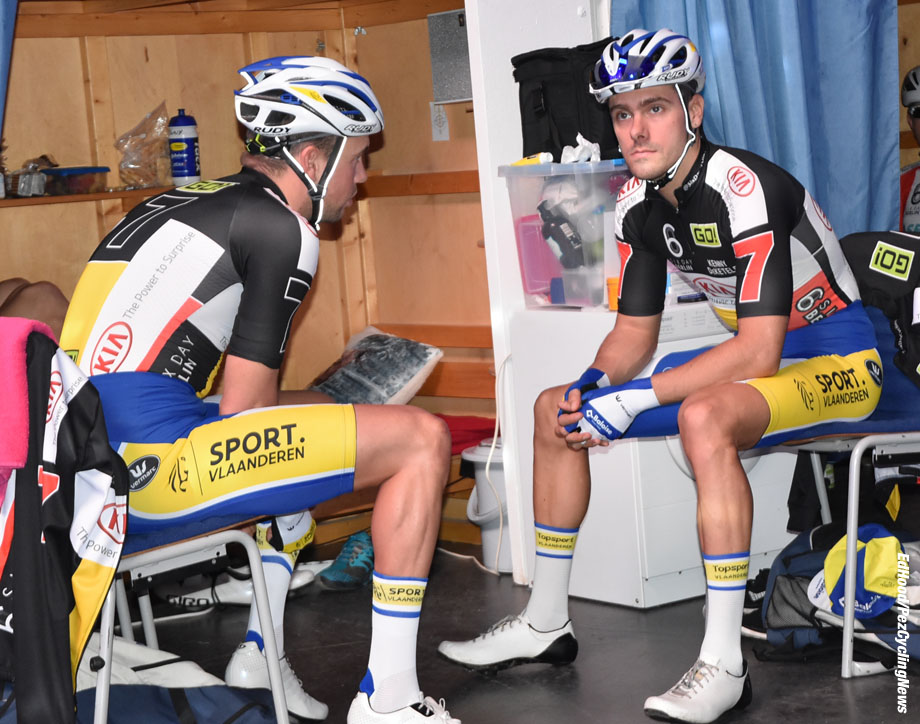 Perhaps it’s just me but Kenny doesn’t look as sharp as usual here – the next few nights will tell. 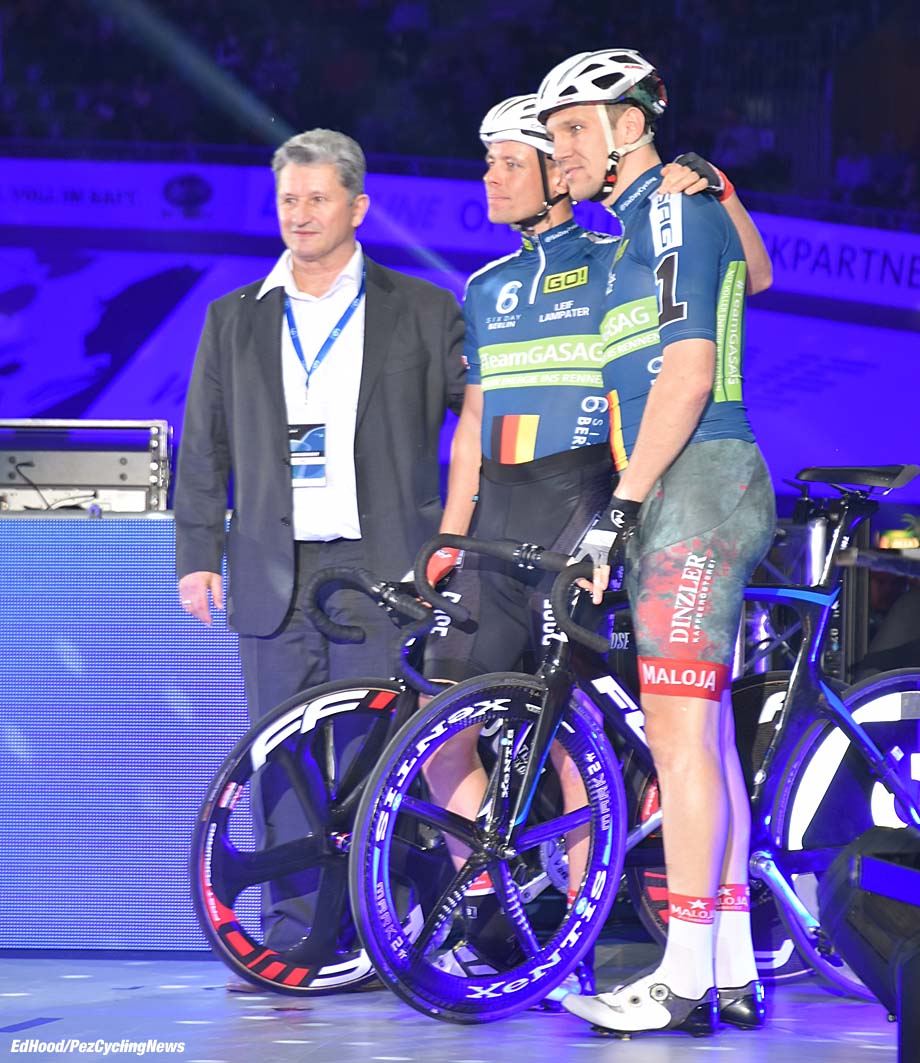 Winners here two years ago, highly experienced (86 starts) Leif Lampater rides with big, strong Marcel Kalz – they should have challenged in the finale but Kalz has picked up that six day rider’s worst nightmare – a bad saddle sore and may well have to abandon (which he eventually did). 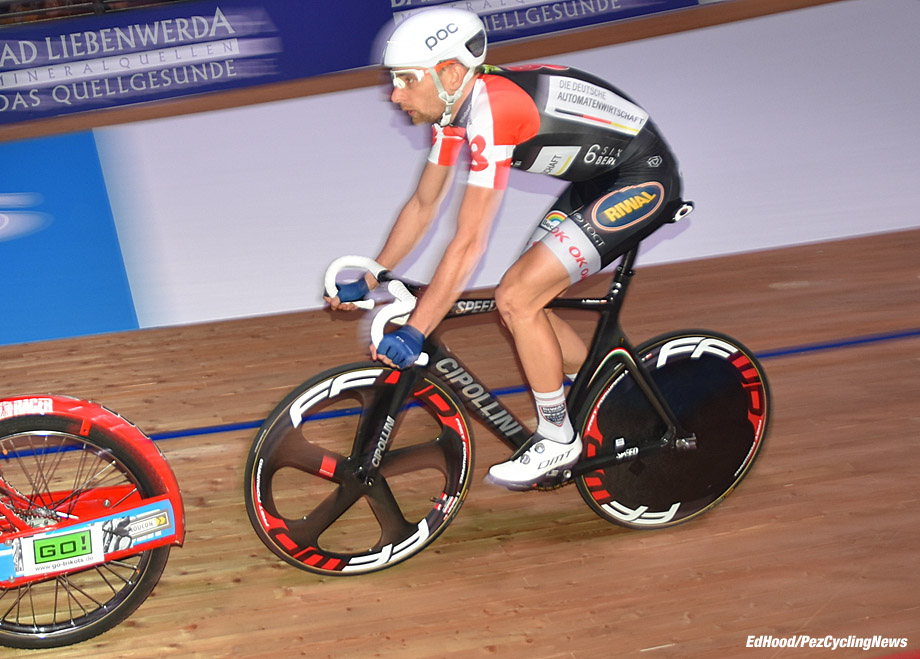 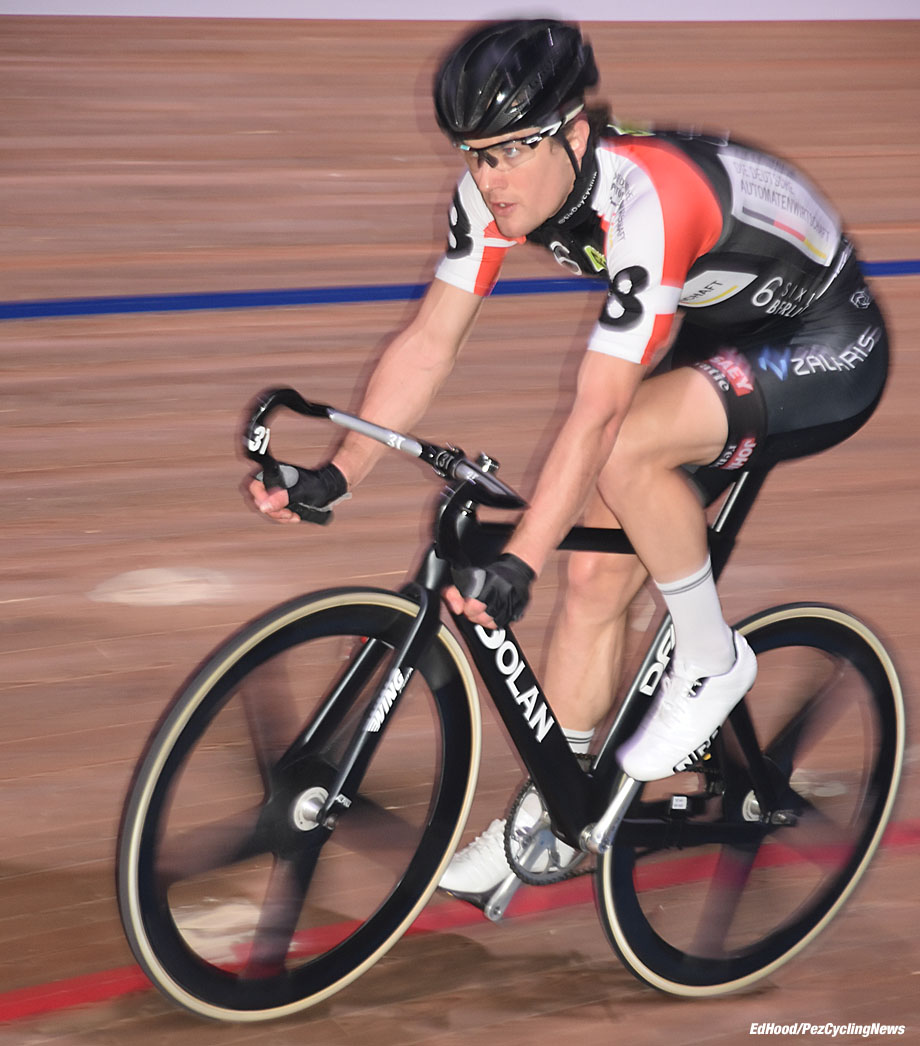 Denmark has a fine tradition of six day men and Jesper Mørkøv (younger brother of Katusha pro and former world madison champion, Michael) is paired with ‘old hand’ (84 starts) Marc Hester continuing the line here. Both riders have a win in the six days of Copenhagen to their credit and have been riding well this winter. 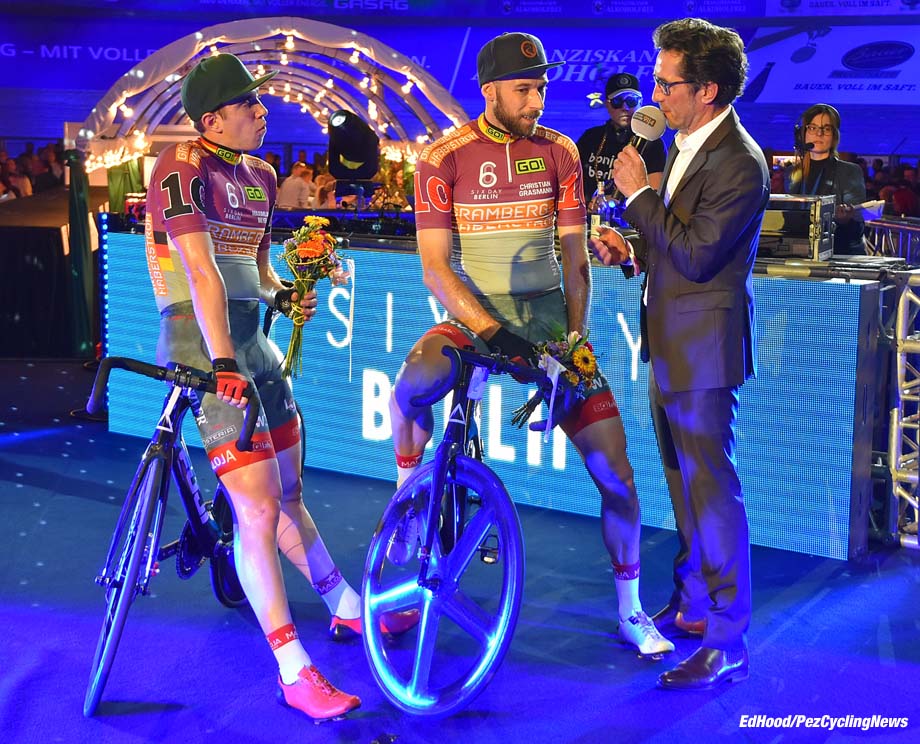 It’s taken Munich’s Christian Grasmann a few years to get to the top but his win in Rotterdam with Big Roger Kluge confirmed that he’s now one of the best – he rides here with Max Beyer, one of Germany’s six day hopes for the future. [Unfortunately, just after we’d penned this, Christian too joined the ranks of the DNF due to a bad crash.] 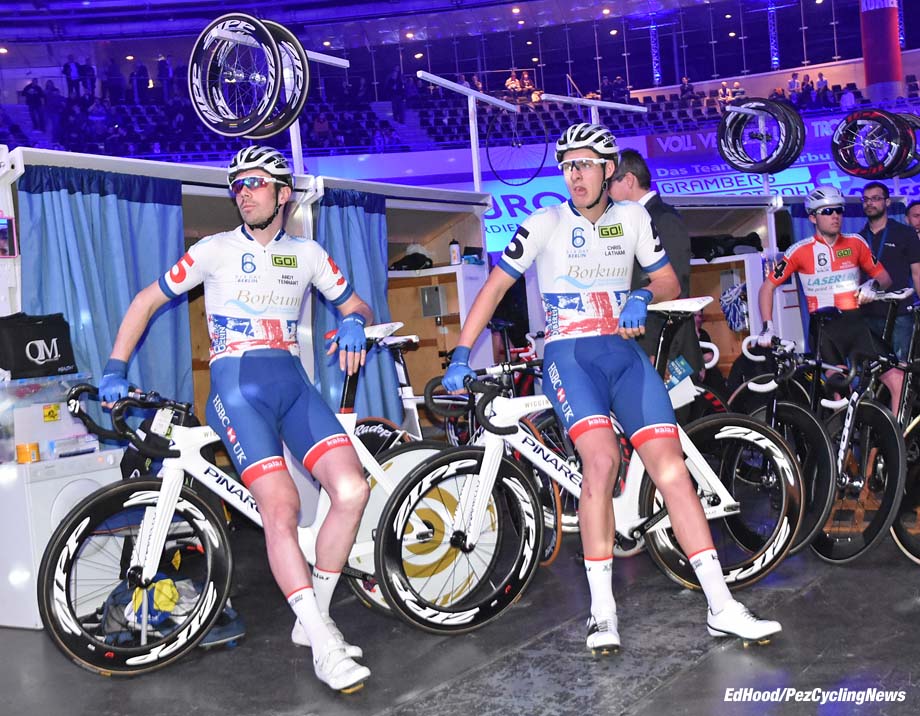 For GB, Chris Latham has ridden strongly in London in the past, here he pairs with former world team pursuit champion and a man who’s twice been on the cusp of riding in the British Olympic team pursuit squad, Andy Tennant. The tall Englishman was in the silver medal team in last year’s Worlds where he also took the individual bronze with a 4:18 ride – they’re a strong pair. 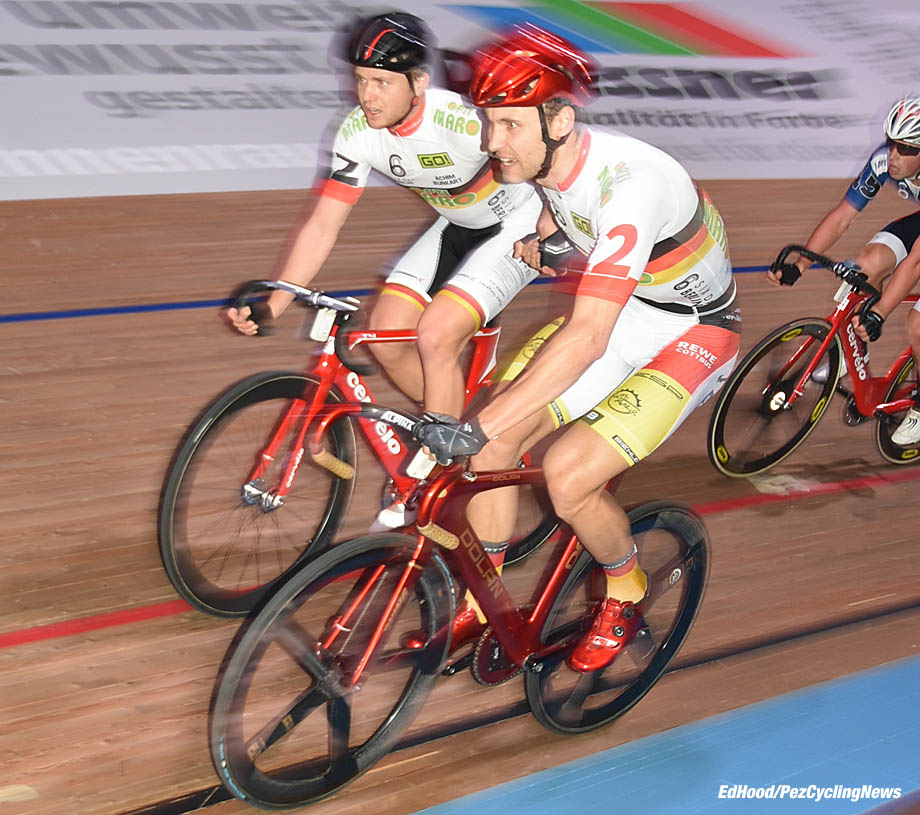 In the PEZ cabin we have no podium ambitions. But the race is about more than three teams – our all-German team of Nico Hesslich (son of 80’s sprint king, Lutz who was multiple world junior and senior world sprint champion and twice Olympic sprint champion) paired with Achim Burkart who partnered with Nico to win the German madison title. 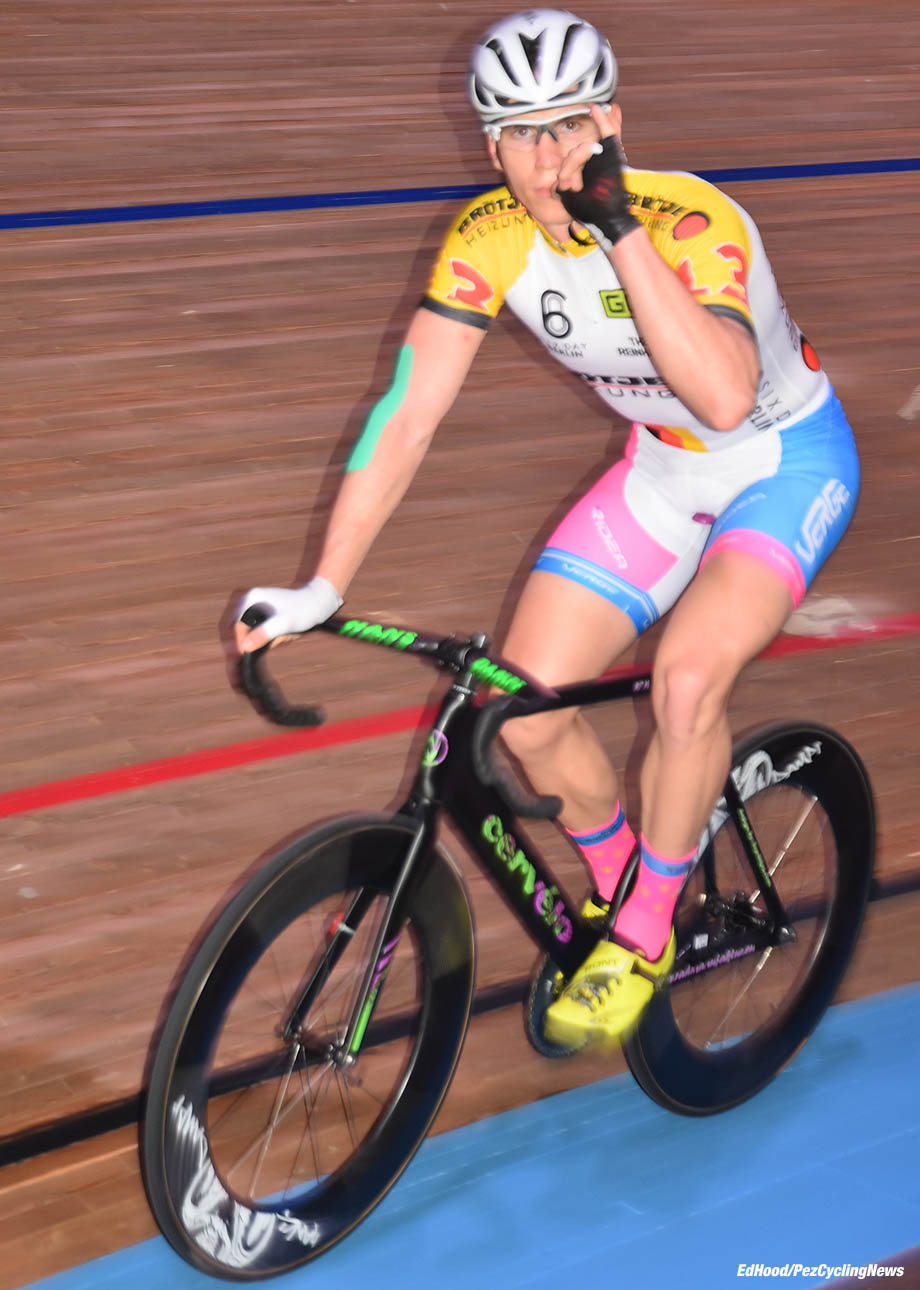 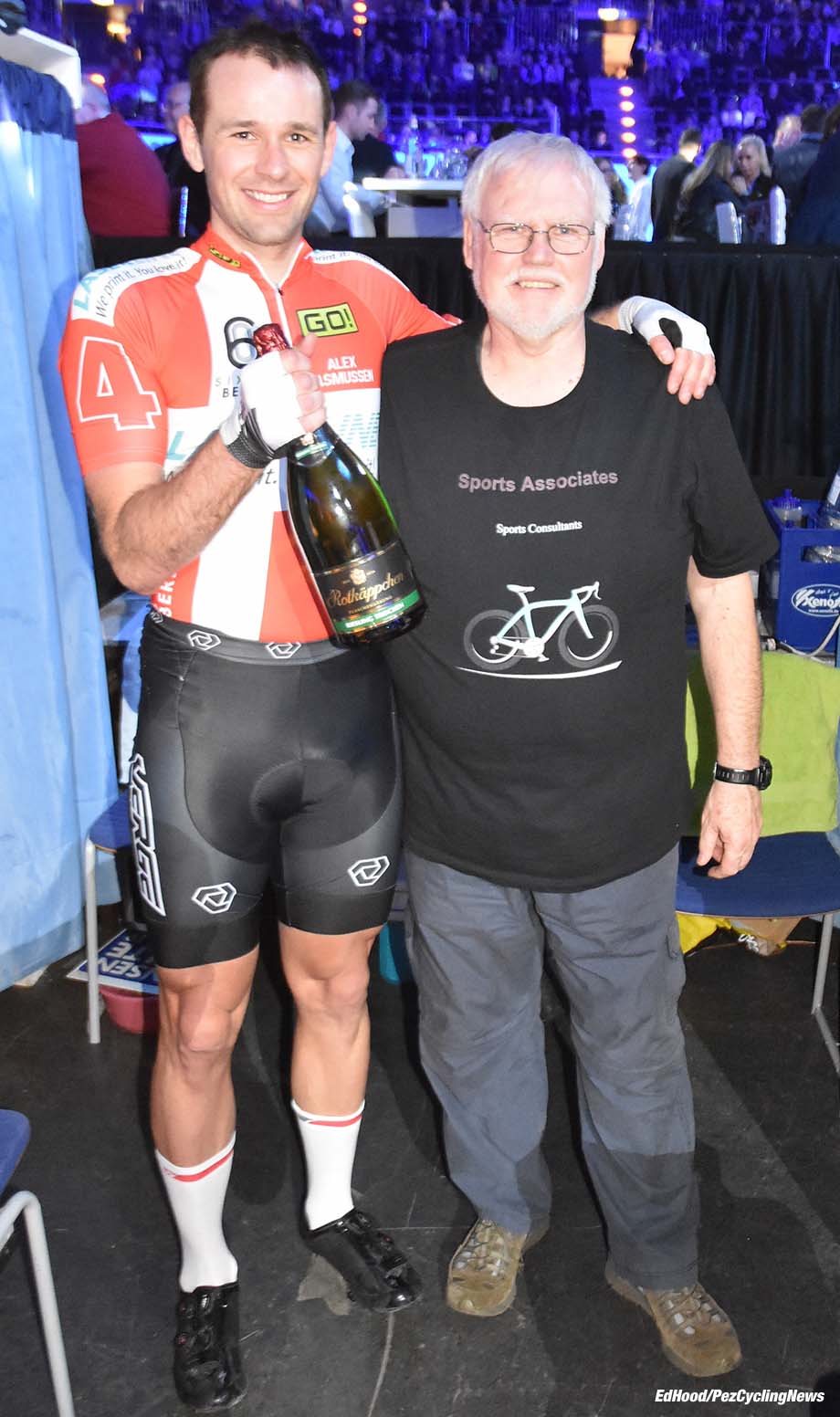 Their Mounts:
As with the road, everyone is on carbon – no room for nostalgia about slim, elegant steel. 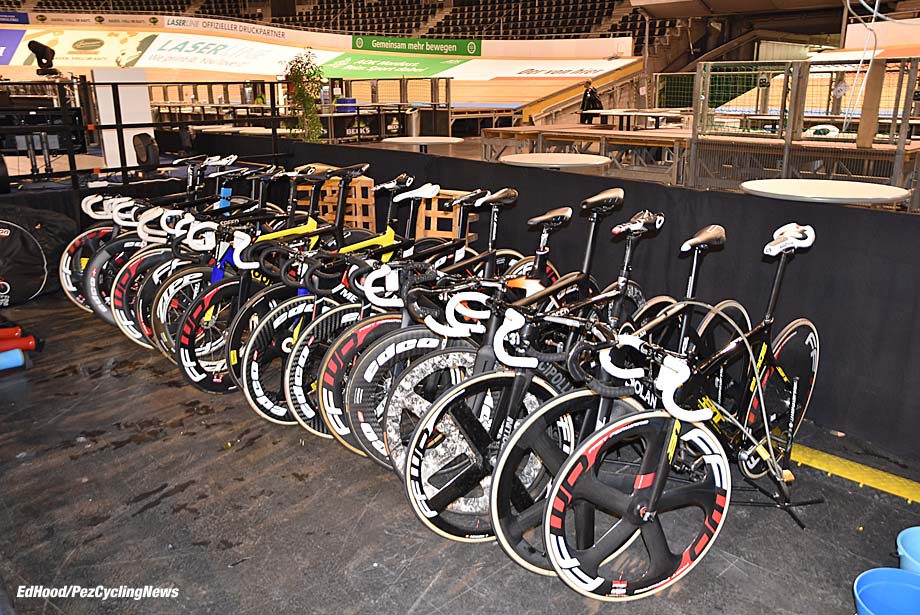 Six day king Danny Clark told me that he’d have killed to have ridden one of today’s composite bikes back in his heyday. He always rode the best steel frame of the day but remembers them bucking and twitching in the bankings as he rode to lap records all over Europe. Two names dominate – Cervelo and Dolan, albeit many are ‘rustled’ and have been given a counterfeit brand. To my eye, the Dolan is a much more aesthetically pleasing beast than the Cervelo – but the Canadian frames are stiff, aero and stable. 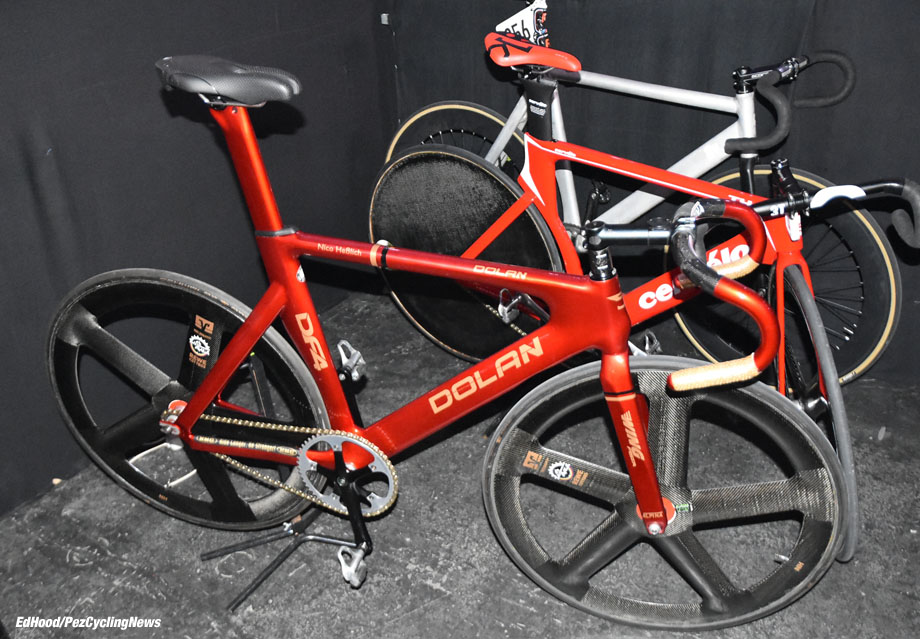 Our man Nico rides a Dolan which he’s had sprayed to match his shoes and helmet – Kris loves the color, it reminds him of his old Raleigh. 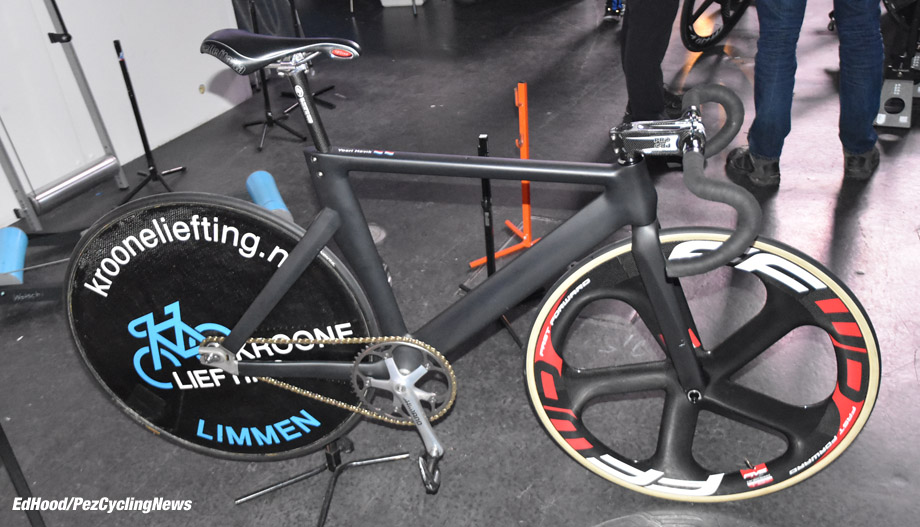 Some riders have to think about sponsors, they may ride for a road team which doesn’t run to the expense of providing track bikes or simply doesn’t have a supplier who manufactures a suitable tool. Therefore their Dolans have to run ‘naked’ – not a bad look, very ‘stealthy.’ 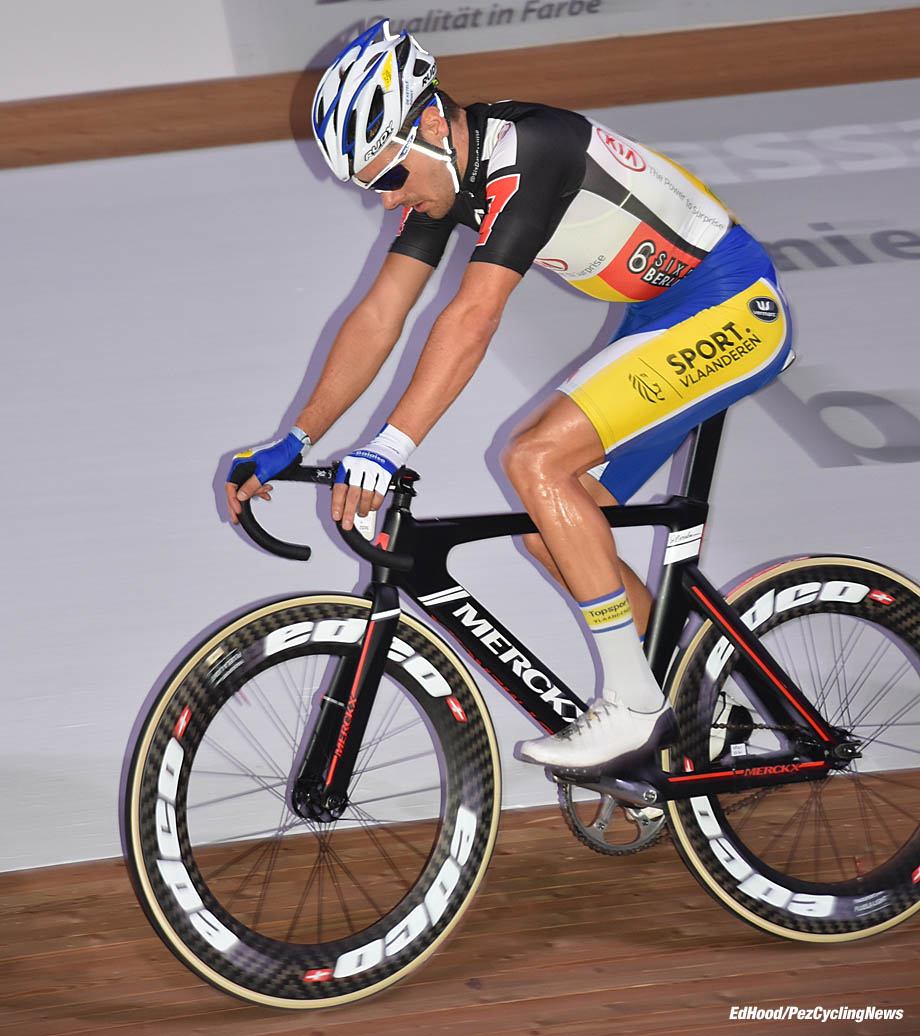 And if you look around, some of the frames don’t mean what they say, if you get my drift? 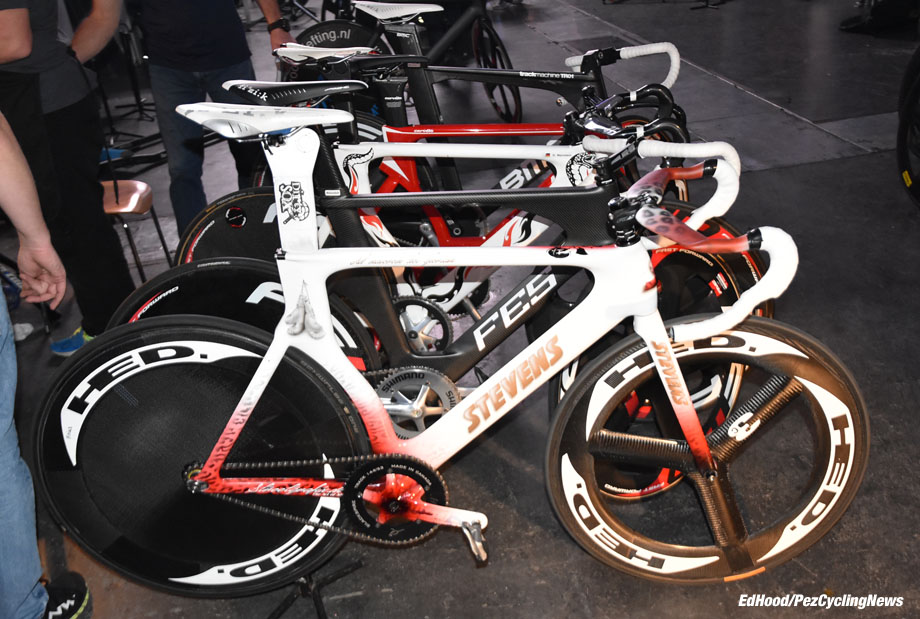 And some of the disguise jobs on the Cervelos. . . you can make your own mind up on this one. 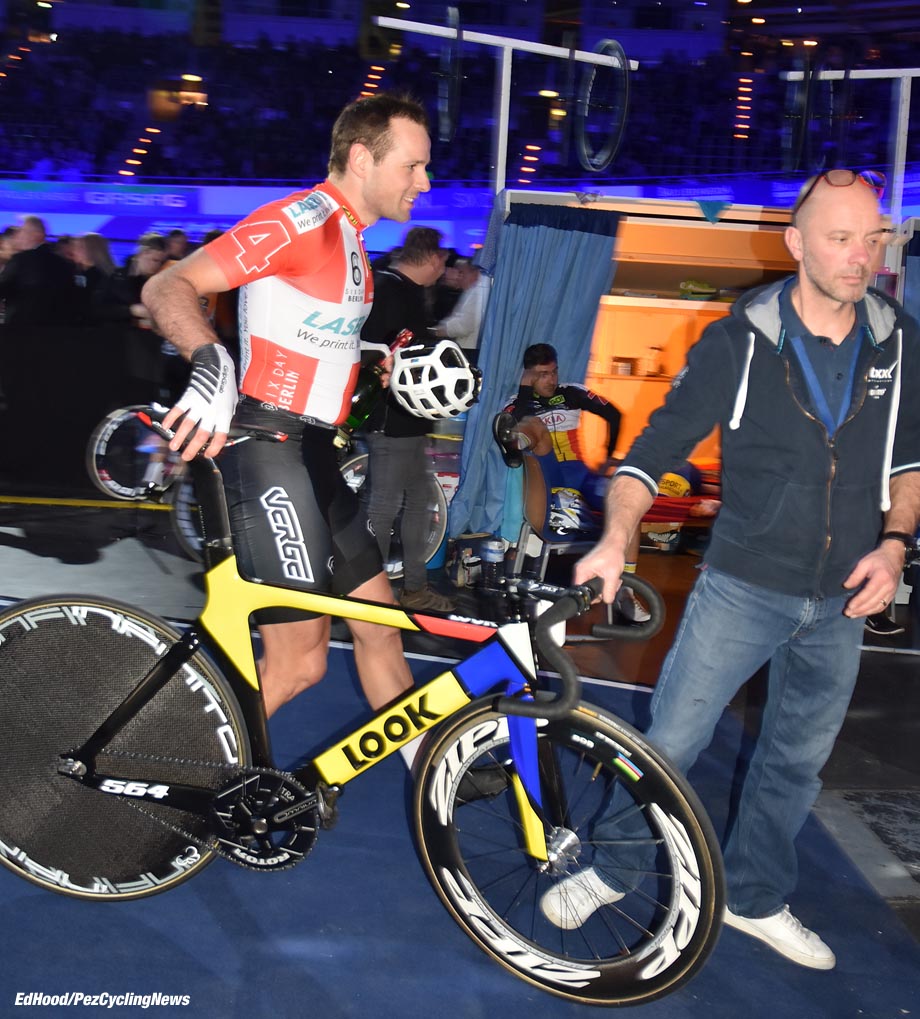 Alex rides a Look, a marque which it’s hard to go wrong with, they’ve supplied the French team with track frames since the all conquering days of Rousseau, Ermenault and Tournant. Light, stiff, aero, solid and the choice of many federations not tied to a sponsorship deal. 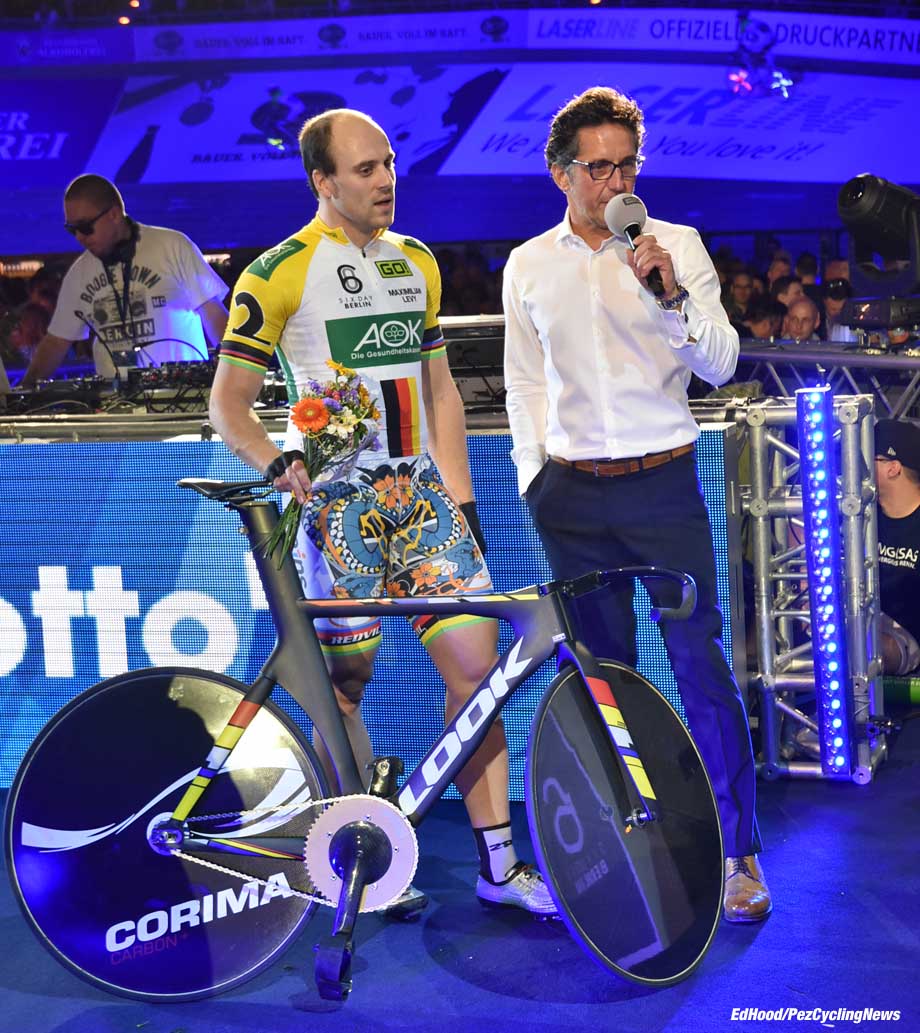 And Look is the weapon of choice for the sprinters, a frame needs to be really strong and stable when the likes of Max Levy ‘steps on the gas’ to ride 250 meters in 12.6 seconds. 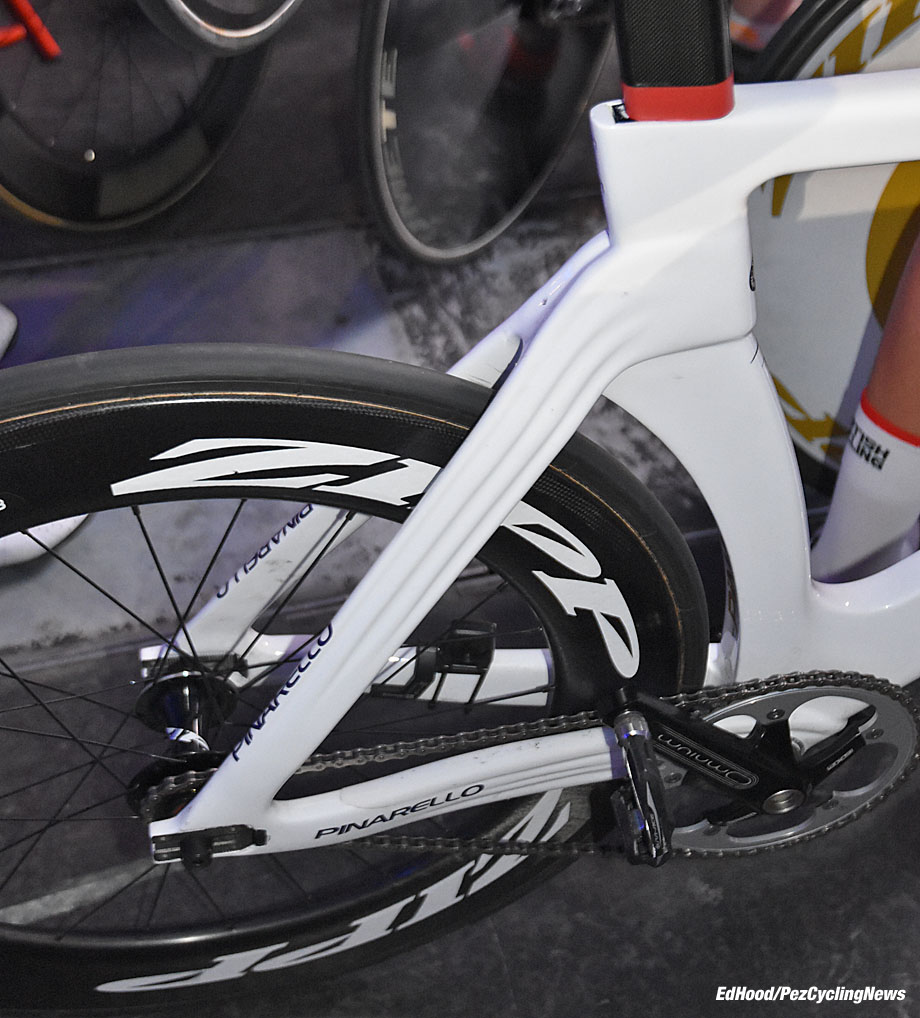 And we have to mention Chris Latham’s Team Wiggins Pinarello complete with Art Nouveau flutes to front and rear forks – an aero ‘twist’ no doubt. 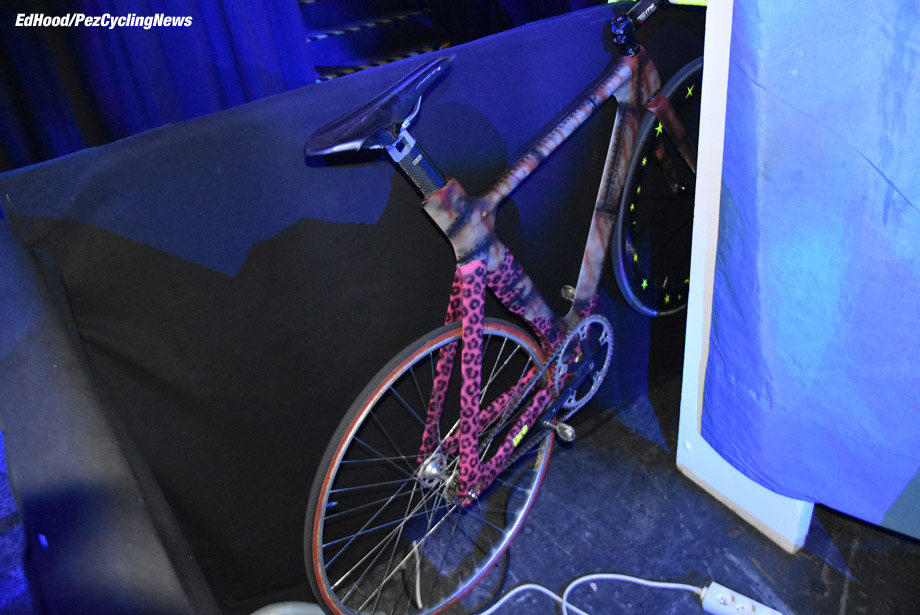 To close, the worst spray job in Berlin, the bike was so ashamed that it was trying to hide behind one of the cabins – poor thing. . . 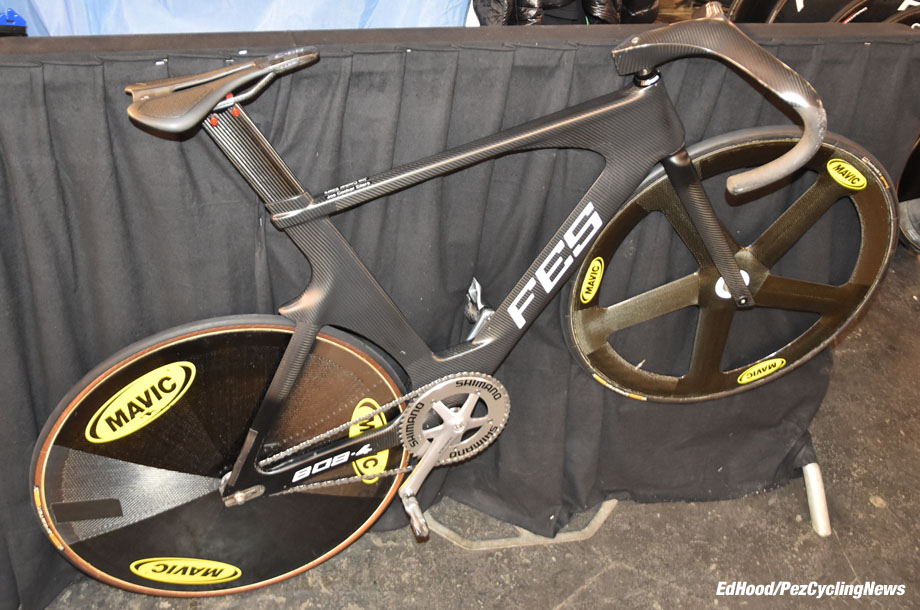 And whilst not in the actual six day, those German National Squad FES sprint bikes have to get a mention – they are mean.

The Derny:
No six day is complete without Derny racing so we figured we’d have a look at the little beasts. 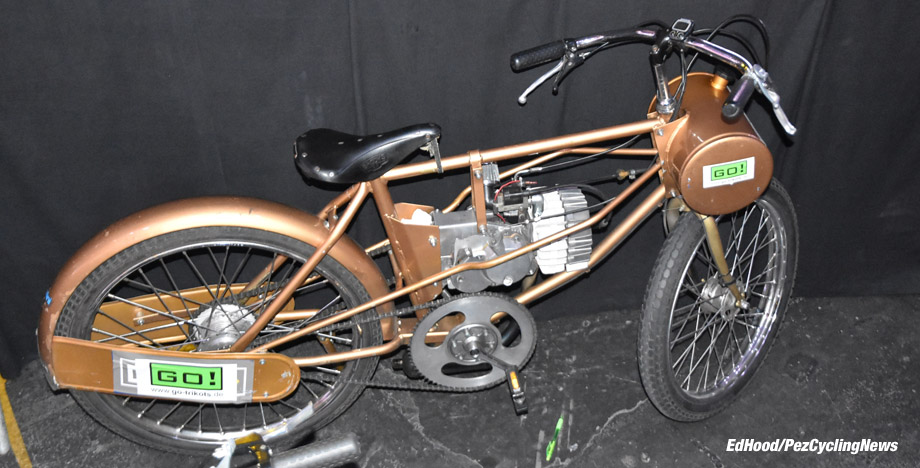 The word ‘Derny’ should always be spelled with a capital; the original manufacturers from 1938 were ‘Roger Derny et Fils’ of Paris. Between 1938 and 1957 they manufactured some 7,000 of the little mopeds with their handlebar mounted fuel tank and 70 x 11 fixed gear. The big fixed gear helps the pilot accelerate gently and smoothly – sudden accelerations and decelerations kill the legs. The ‘main man’ among the pilots is Ron Zijlaard, son of legendary driver, Joop. 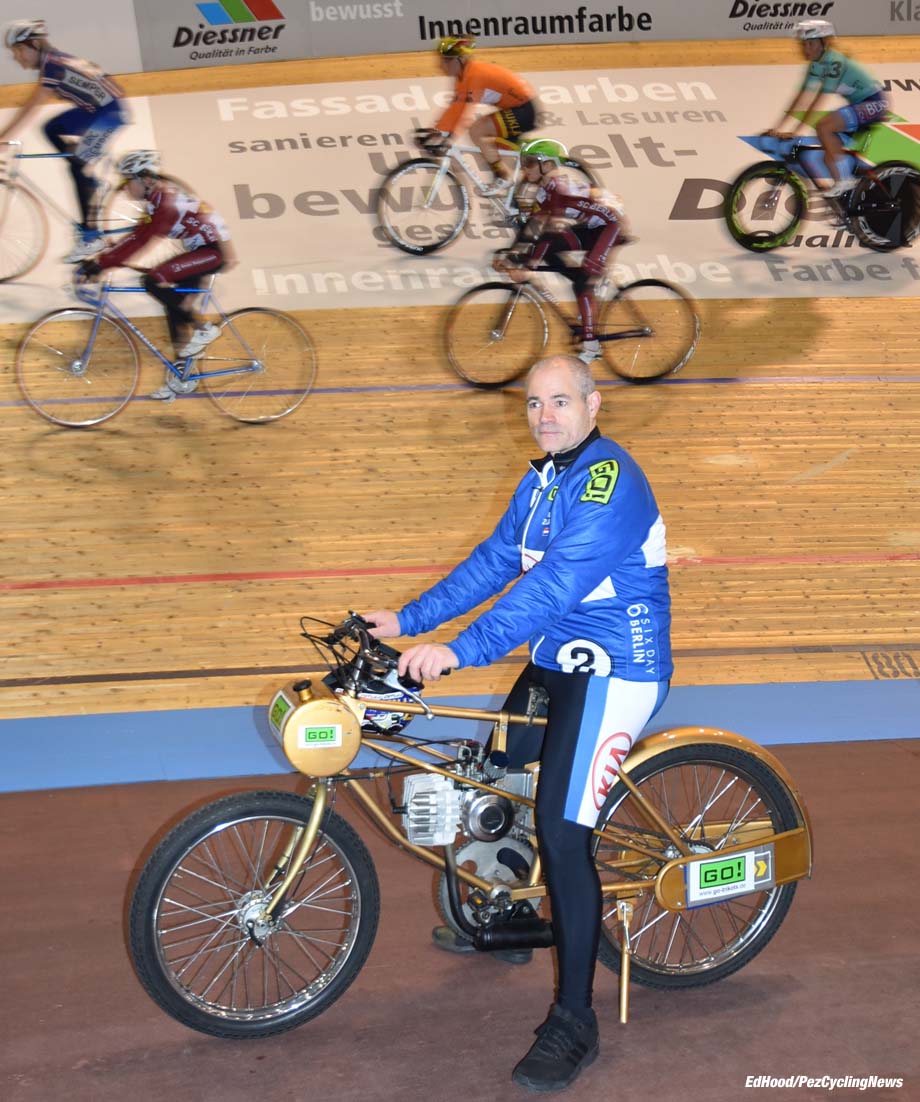 I asked Ron if that’s his dad’s original and famous gold painted Derny he rides; “of course !” came the reply. The mark of a good driver is smoothness; no rider wants efforts which suddenly thrust him into the red.

Back in the days when there was a world motor paced championship the men who were good behind the big motors were the men to beat behind the Dernys. Motor paced ace Theo Verschueren’s rivalry with six day king Peter Post behind the Dernys was legendary – the two despised each other, on and off the bike. 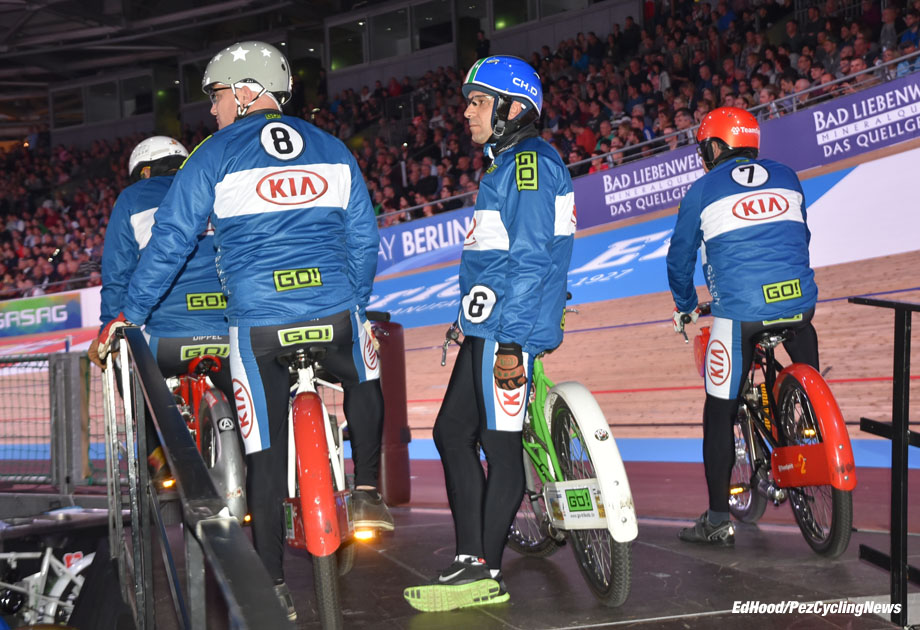 Those days are gone but the Derny is still a crowd pleaser here in Berlin.

The Finale:
So much for the easy stuff to write about. . .
I had hoped to chat a bit about the riders and bikes then close with a glowing paean to the finale in Berlin – but I simply can’t.

The ‘new format’ for these Madison Group sixes is not the way ahead.

# There are too many gaps in the programme, the snappiness of Ghent is missing, the excitement and tension is allowed to slip away. In theory it’s slick to have the riders come down a ‘runway’ into the track centre for an interview but in practice it slows things down; there’s nothing wrong with flowers and a few words on the line – and on to the next event.

# We don’t we really need video screens to explain madisons to the crowd in Berlin? – they’re aficionados, there’s perhaps a clue in the fact that this is edition 106.

# Having the pits in the centre, divorced from the track makes it difficult for staff to assist riders and awkward for riders to get on and off the track.

# Paying the riders a reduced contract sum and then leaving them to find the rest of their earnings in prize money may seem like a good idea but in practice, it kills the racing. Instead of putting on a show for the public they’re too busy worrying about their standing to ‘go for it’ in case they slip in the classification and lose money. This makes for highly negative racing – the last 30 minutes of the finale in Berlin saw a grand total of two laps gained. And one rider said to us; ‘there’s no point in attacking, you’ll get closed down – boring!’ 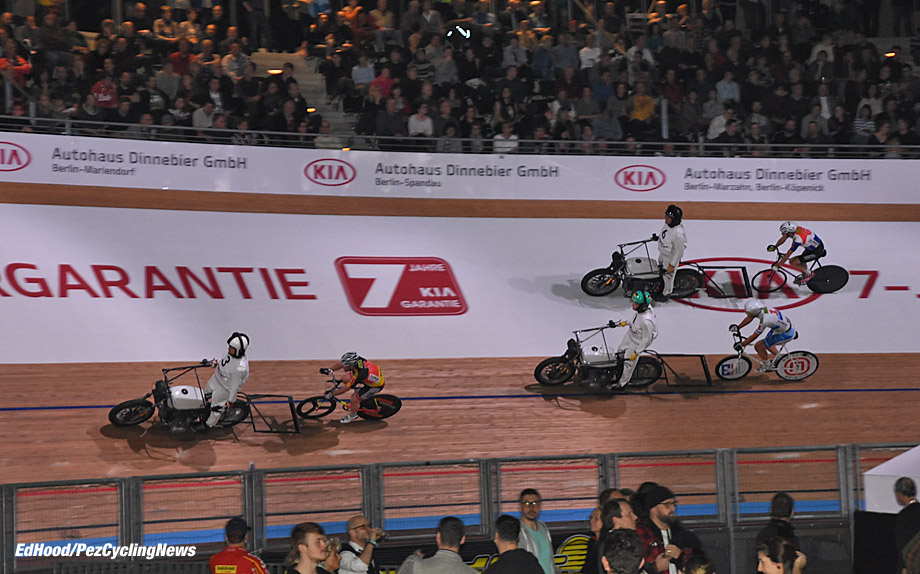 Whilst the crowd love the sprinters and stayers here, they want to see good chases, the life’s blood of any six day – two laps gained in 30 minutes does not constitute a good chase. As prominent six day man said to me; ‘if the chases keep going like this then public aren’t going to come to watch us.’ 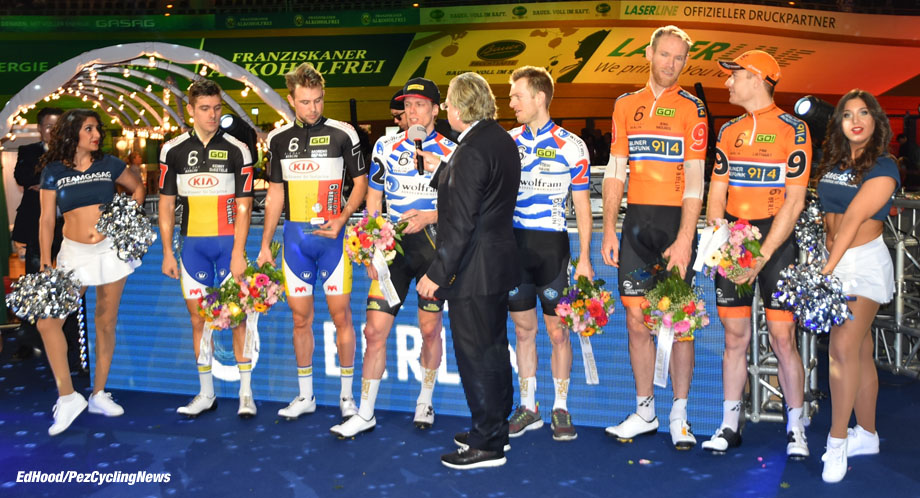 Congratulations to winners Yoeri Havik and Wim Stroetinga – and no, I didn’t tip them to win – but please don’t tell me that this event is what six day racing is about.