The winter is here in Europe and if you are not playing cyclo-cross in the muddy fields of Belgium you must be in-door at a ‘6 Days’ somewhere. New on the track calendar for the 2015/16 winter season is the London 6, well the London 1 + 5 Days to be more precise. Ed Hood is back in harness and working hard in the track cabins, but he has had time to fill us in on his London experience so far.

“Nice colours,” I say to Albert Torres, resplendent in his blood and sand red and yellow of España kit.

He smiles; “yes but those colours are the best,” he tells me as he nods toward affable Frenchman Morgan Kneisky who’s just strode into view resplendent in his rainbow jersey as World Madison Champion. 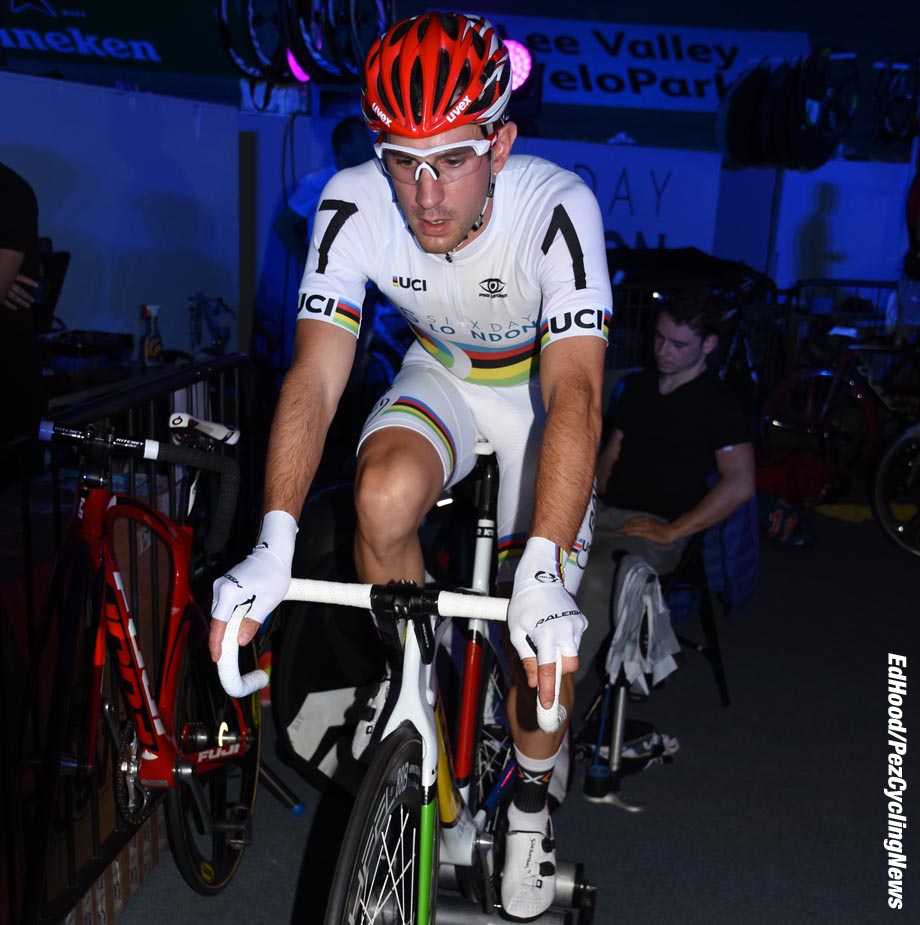 This is the third happening in recent years which I never imagined I’d live to see; I’ve seen a Briton win the World Elite Road Race Championship, a Brit win Le Tour and now – I’m working at a six day race taking place in the UK.

It’s not a ‘proper’ six in that the first day of racing – Sunday – was a ‘stand alone’ event with the ‘six’ starting on the Monday when the big names arrived back from Switzerland and the European Track Championships. 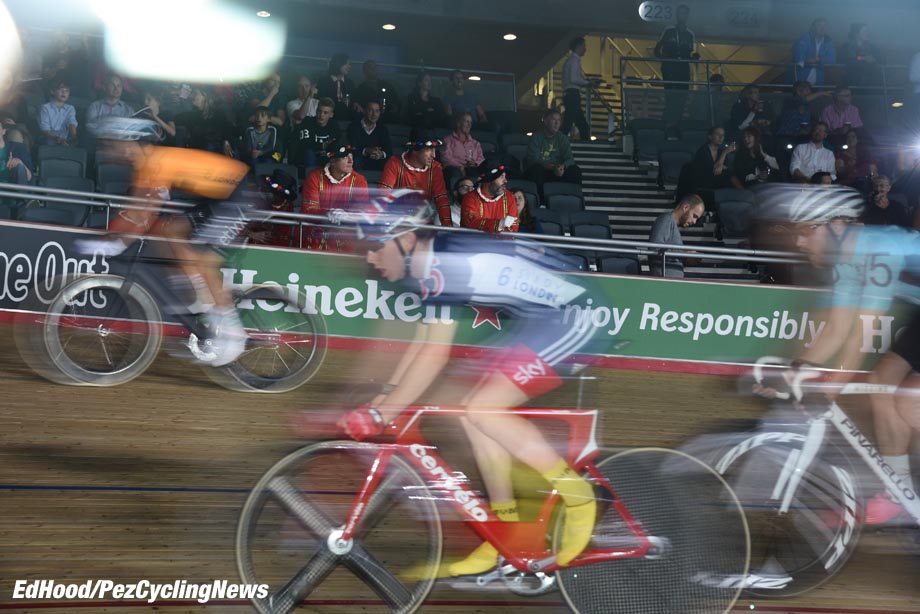 The setting is the Lee Valley Olympic Velodrome; at 250 metres a bittie big for a six day track but it’s fast; witnessed by the world record for the team pursuit on it’s boards – 3:51:659 in the 2012 Olympics by the GB team. 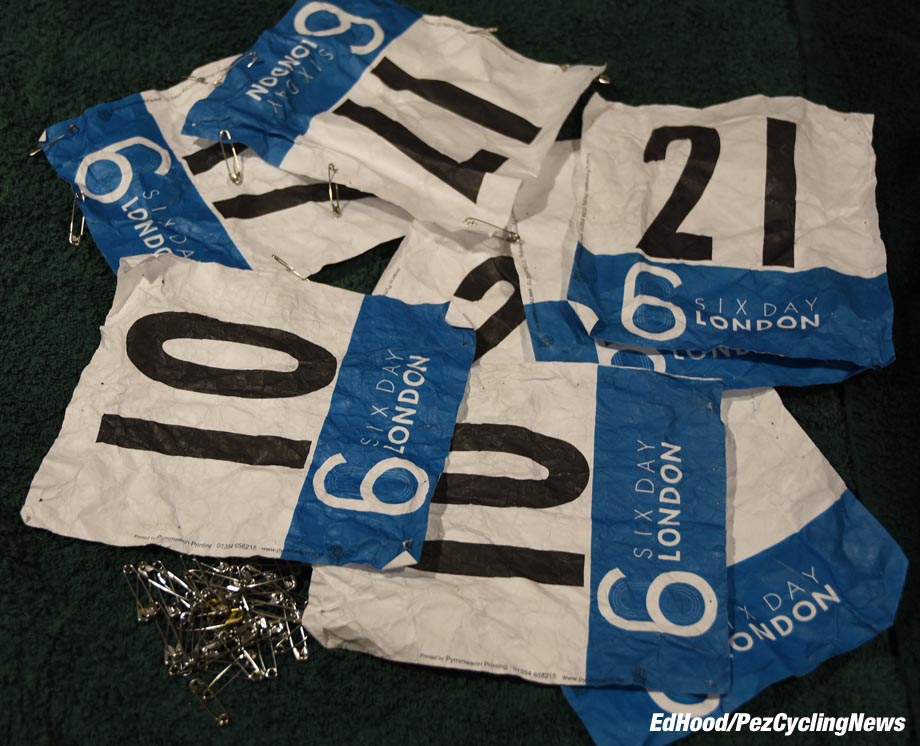 Get a number on your back!

I’m in my roll as ‘runner’ or ‘garçon de course’ – ‘boy of the race’ as the French would have it. A bit of a misnomer for a 60 year-old but never mind. I work for Kris and Martyn who are soigneur to seven riders between them. We have a mixed bag, from US ‘Krit King’ Daniel Holloway – 25 wins this season on the US crit circuit – to young GB up and coming track stars Chris Latham and Ollie Wood. 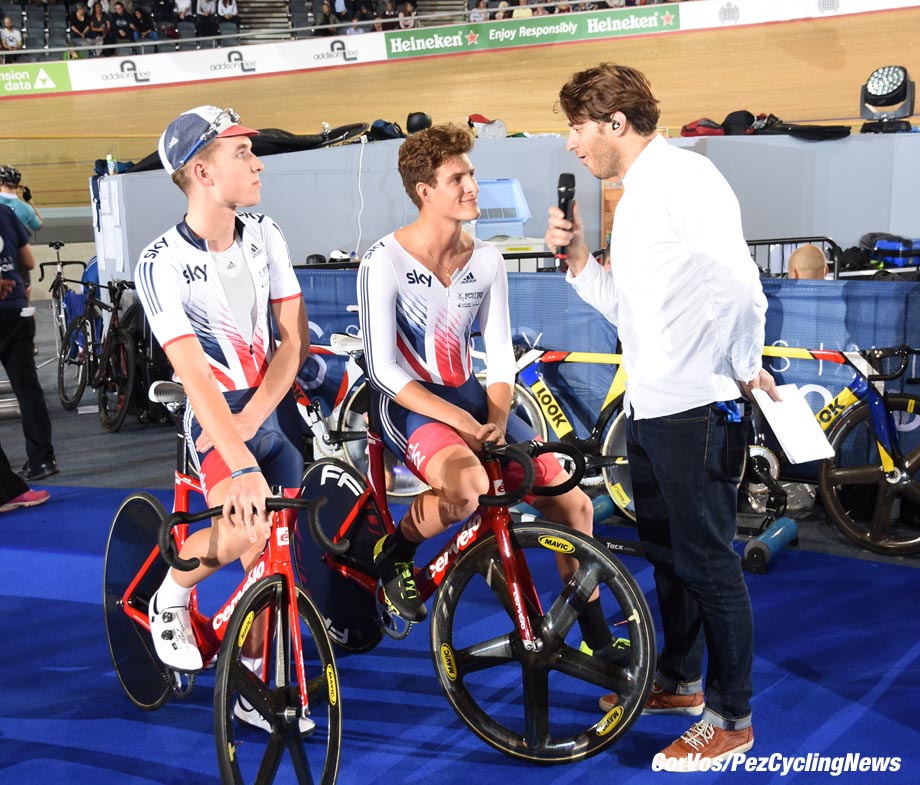 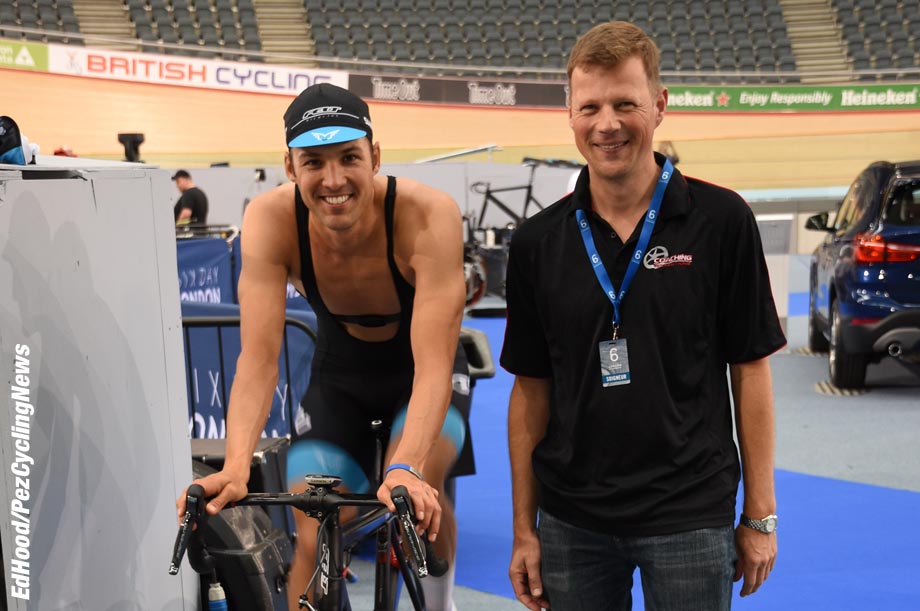 The men to beat are some of the six day circuit’s best. Etixx – Quick-Step’s Crown Prince of Gent, Iljo Keisse is here, partnered with his countryman and fellow track flyer, Gijs van Hoecke. A man who’s also won in the Capital of Flanders, on those Kuipke boards is Kenny De Ketele rides with another of the ‘new wave’ of Belgian board flyers, Moreno De Pauw. 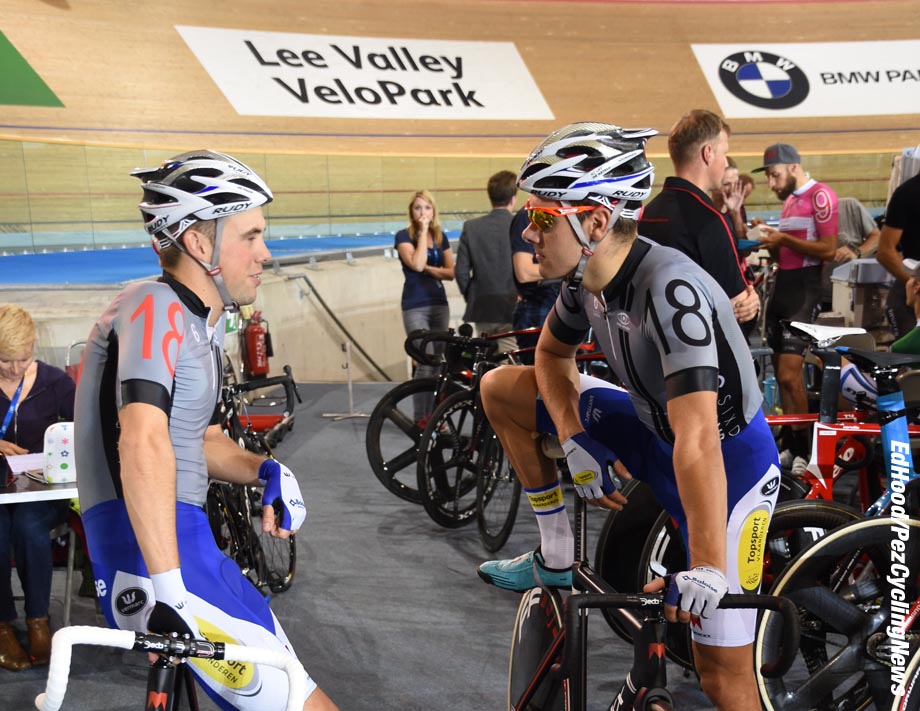 For years Iljo bore the burden of being Belgium’s top six day man but the riders just named along with the absent Jasper De Buyst mean that there’s no shortage of Belgian ‘squirrels’ – as they used to call six day riders back in the day. 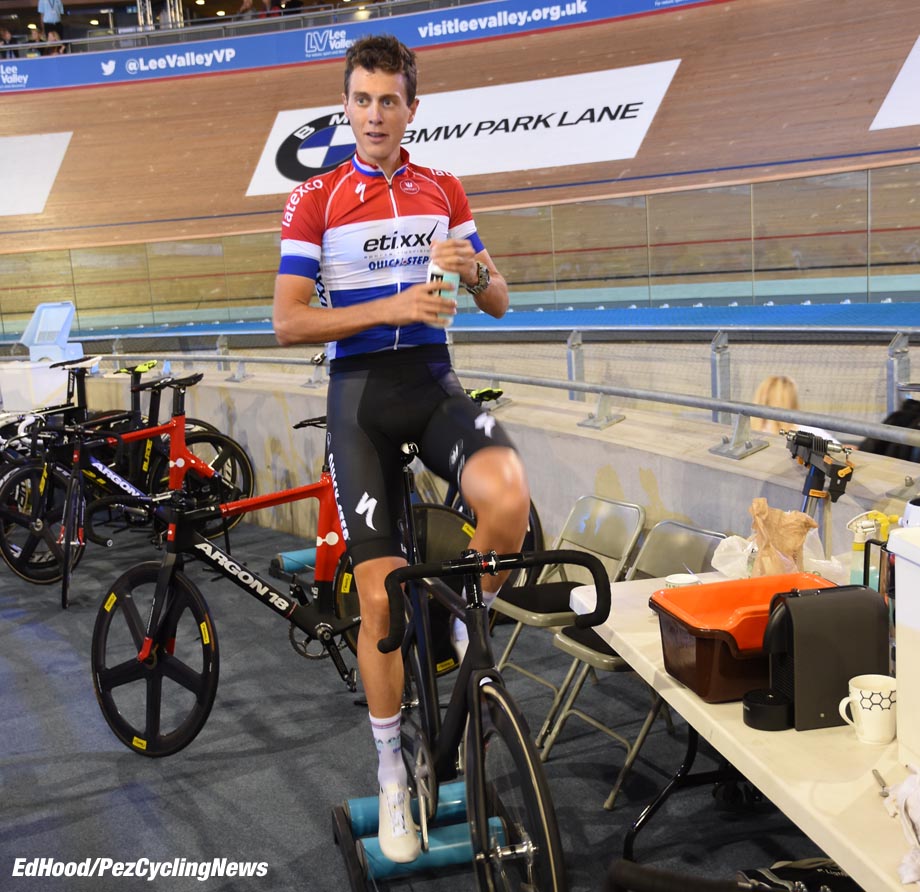 Keisse’s trade team mate and Classics strong man, Dutch Elite Road Race Champion, Niki Terpstra is here too, partnered with the man he won the Amsterdam Six Day with, Yoeri Havik, who’s back is so flat when he’s ‘on’ you could use it as a coffee table.

Danish poet of silky smooth motion around the boards and soon to be Alex Kristoff’s lead out man at Katusha, Michael Mørkøv has been World Madison Champion and has won the world’s best surviving six day – Gent – in the past. He rides with brother, Jesper a former European Derny Champion. 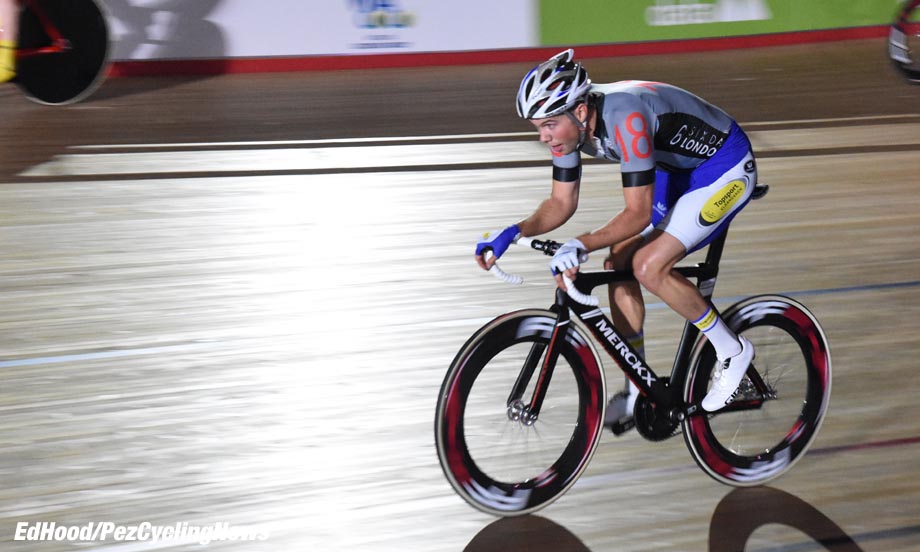 And there are more fast Danes on the agenda – the man with whom Michael won his world madison title, Alex Rasmussen rides with six day stalwart and former Copenhagen winner (with Keisse) Marc Hester – as does the aforementioned, Kneisky who’s paired with World Scratch Champion, Lucas Liss of Germany.

And not forgetting those Spaniards, Torres and amigo Muntaner who were 2014 World Madison Champions. All in all not a bad line up.

I arrived on Sunday in time to catch the finale of the “1878 Cup,” named in honour of the year in which the first London Six Day took place. Young Scot, Mark Stewart who recently won the British scratch and team pursuit titles took the overall honours in the event paired with Germain Burton, son of former GB six day man of the 70’s and 80’s, Maurice. 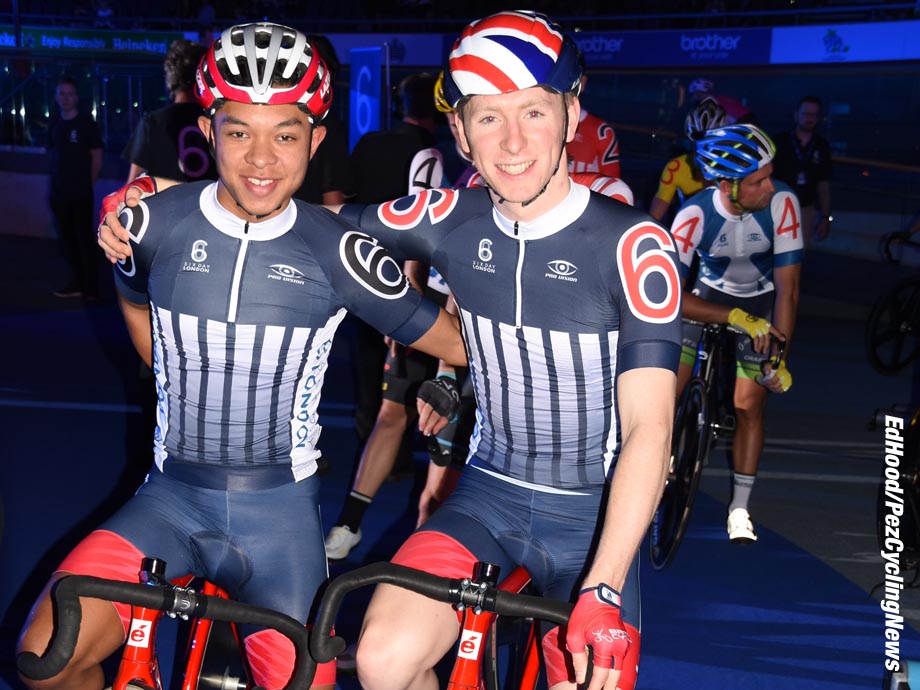 Whilst the likes of Keisse and De Ketele were still at The Europeans; Terpstra, Rasmussen and riders like Olympic omnium champion, Lasse-Norman Hansen were still very much ‘in the house,’ so a fine win for the young GB riders.

The track: The so called ‘Pringle’ due its shape, like a potato chip – sits in parkland but is surrounded by hi-rise ‘concrete jungle’ and building sites. But once you’re in the stadium it feels like ‘home’ – not unlike the big 250 bowl of Copenhagen – and all the familiar staff faces are here, Dirk, Jodo, Brent, Michel, Tino, Eddy. . .

And helping Jodo is former six day star and Het Volk winner, Germany’s Andreas Kappes – looking just as perma-tanned as he used to but maybe a little heavier. 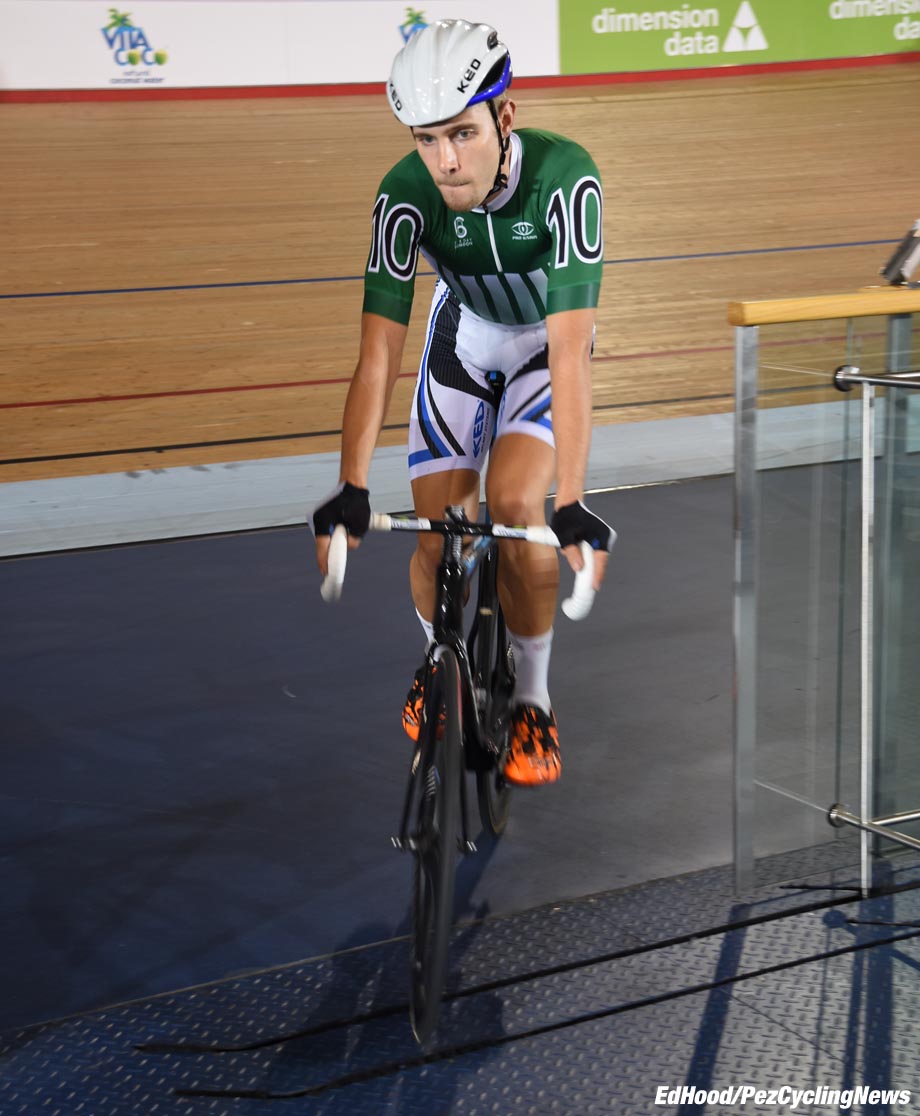 Monday: the first time you waken up in the camper after an absence it’s a bit like coming out of hyper sleep in a sci-fi movie, the ceiling inches above your head, the bulk heads on both sides – “where am I, what year is it?”

Night one and the programme is slick – 20K madison, two Derny heats, team devil, 500 metre TT and a final chase of 35 minutes with the sprinters in between each event. Their keirin final is a damp squib though as the Derny fails to fire up – never mind. . . 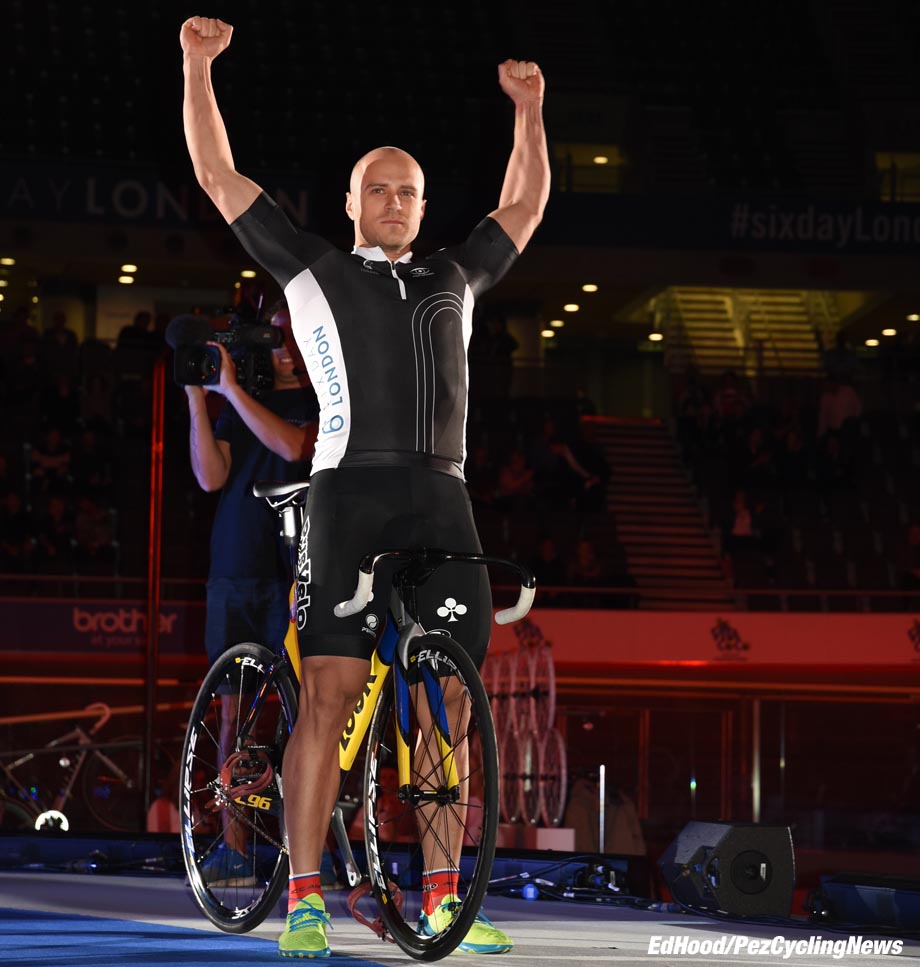 Negatives: The sound in the track centre is terrible – the speakers face out to the crowd, the reverb is awful and the music just isn’t right. When the sprinters are winding up it should be appropriate sounds; the intro to ‘Zorba’ or ‘Twin Peaks’ are favoured options on the continental circuit the DeeJay here may be a ‘name’ but this ain’t a club, it’s a six day.

Martyn does us pasta for supper with San Miguel to wash it down – can’t be bad. 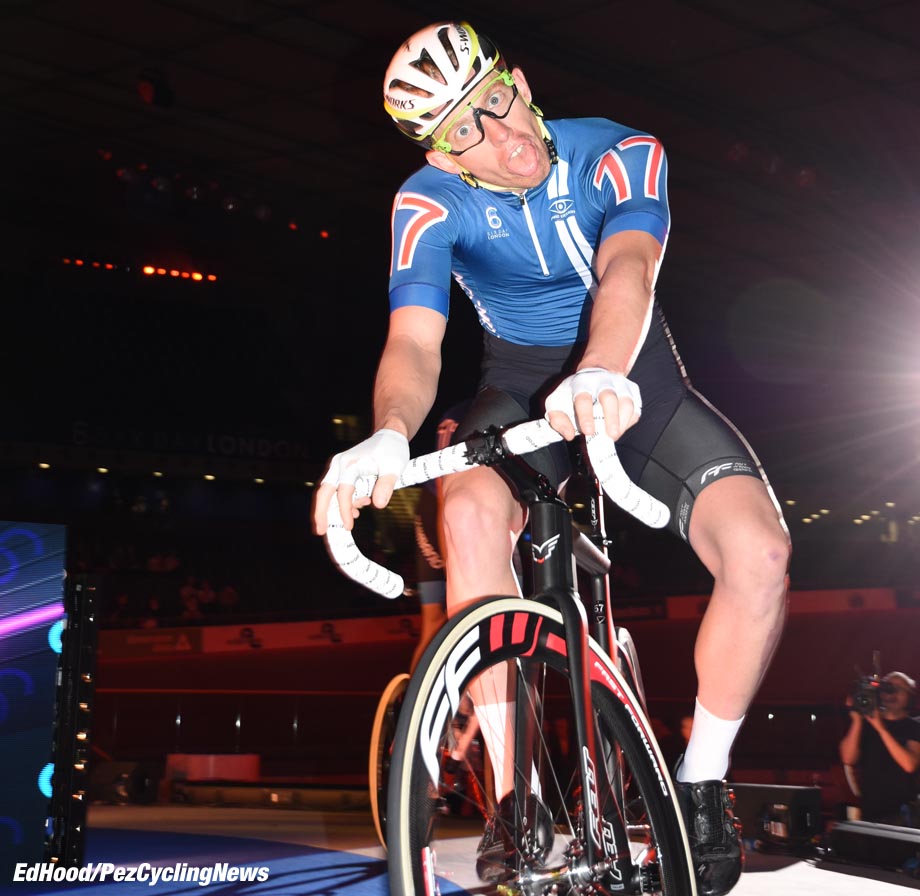 Tuesday: “It had been drawn to our attention that riders have been cycling down the corridors of the hotels – this is obviously unacceptable.” Is the announcement which greets us – no such problems in the camper. . .

There’s maybe a wee bit too many sprinters’ races for some tastes with biggest name being three times European Sprint Champion and multiple Worlds and World Cup podium finisher, Russia’s Denis Dmitriev. The USA’s Nate Koch rides too; he has a mean line in victory salutes which he displays win or lose, not that he wins many – but the crowd do like him. . . 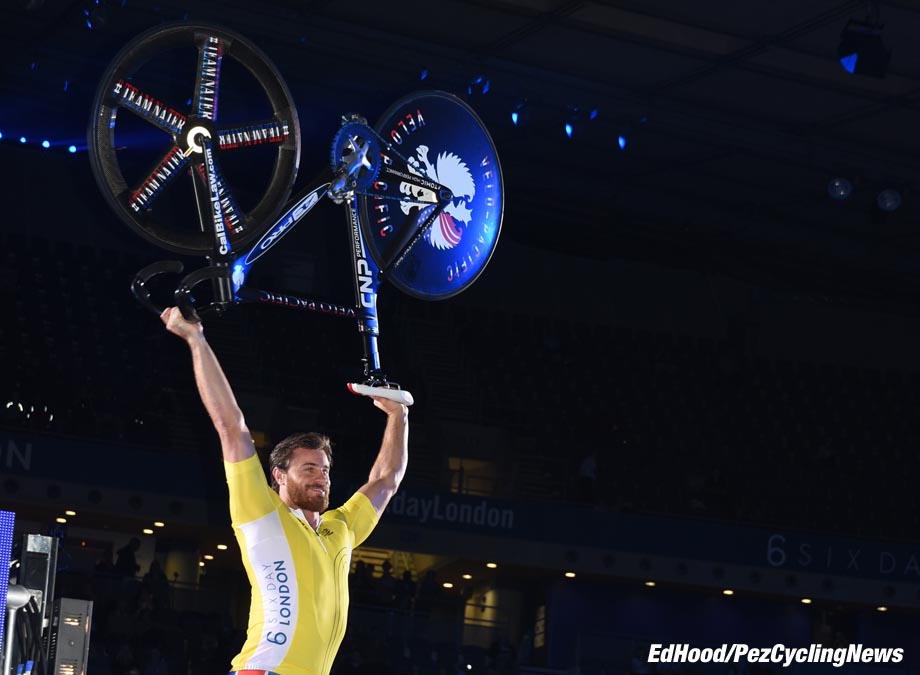 “What size of chainring is that?” I ask one of the young GB sprinters – it was either Matt or Thomas Rotherham, they’re brothers and it’s hard to tell them apart – “that’s a 60 with a 15 sprocket so it’s only 108 inch – I use the 12 tooth sprocket for qualifying timer trials,” he explains matter of factly. I remember the days when 94 inch was a big gear for a sprinter. 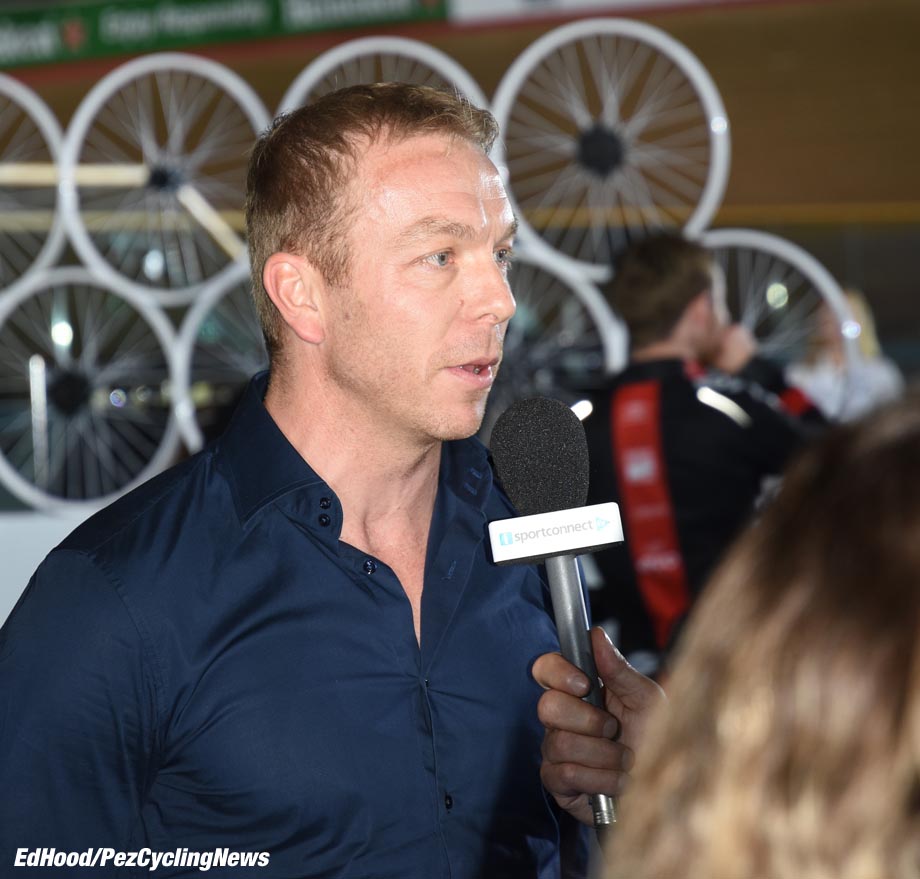 And we have visitors – Chris Hoy, looking trim and Cav, looking stubbly. 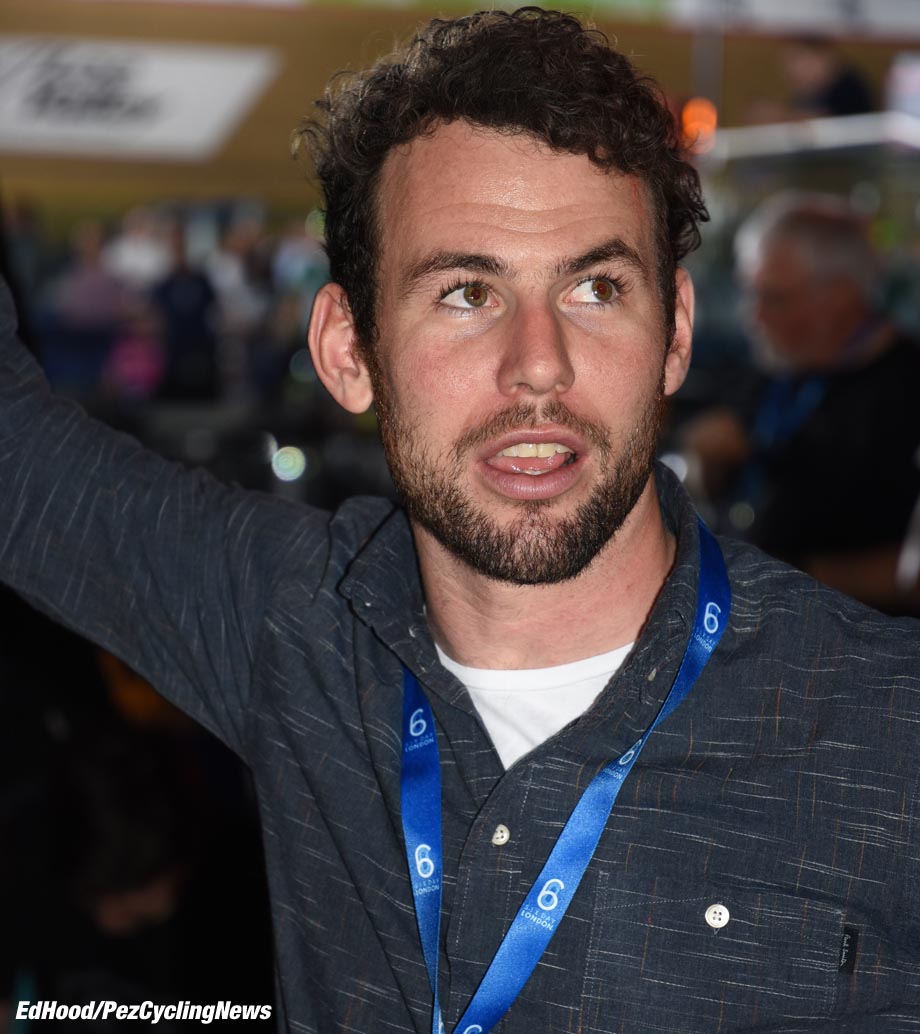 But the night belongs to Martyn’s boys, Latham and Wood who win the 500 metre flying time trial, the team devil and the last chase. The short chases suit their big geared aggressive style; no one is on 52 x 16 – the classic six day gear – in this race. 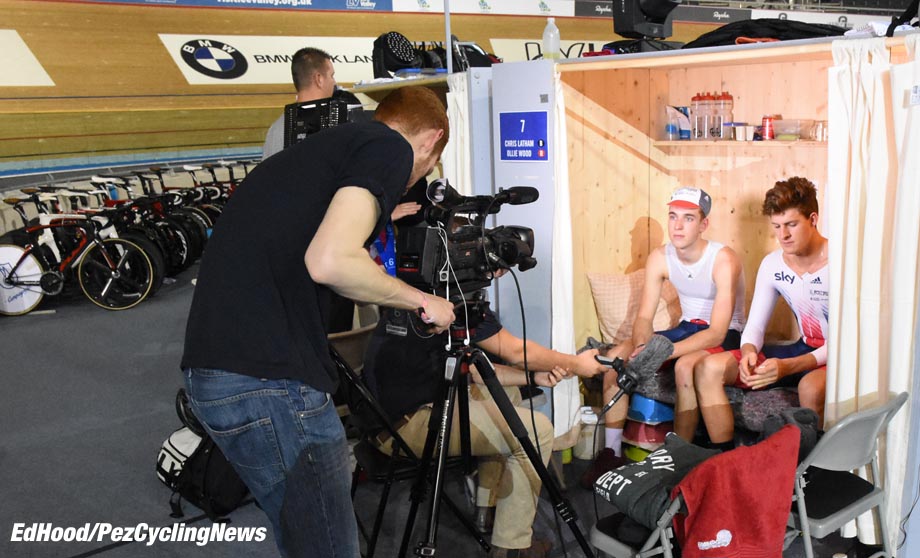 The young GB men are on what are heading towards the much higher ratios ridden in World Cup chases – 95 inch or even 98 inch and whilst these gears are OK if the tempo is fast and constant they’re leg breakers if it’s ‘stop-start’ with kicking back then accelerating on the big ratios killing the leg muscles. Word is that Iljo Keisse is on 98 inch too – he’s not had time to make the transition from those big road ratios to the twirling world of the chase and has had to gear higher than he normally would. 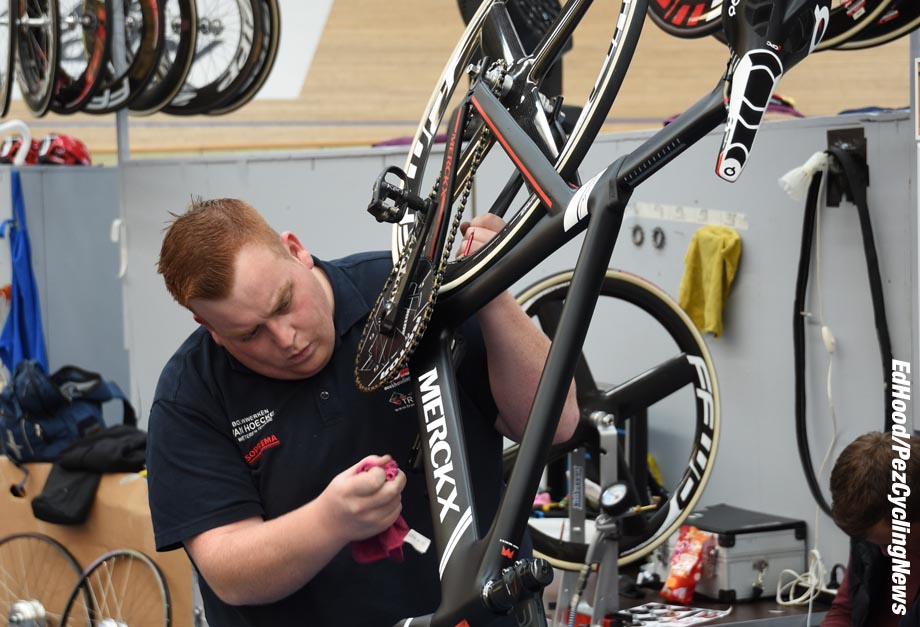 There are knowing nods about the English lads aggressive riding; ‘wait and see how they’re going on those big gears by the end of the week. . .

But as Noel Gallagher might say they seem; ‘mad for it!’ to me – and they can’t win it. Can they?

The supper time aroma in the camper was of chicken curry and Leffe – ‘like a Friday night’ as Martyn said. 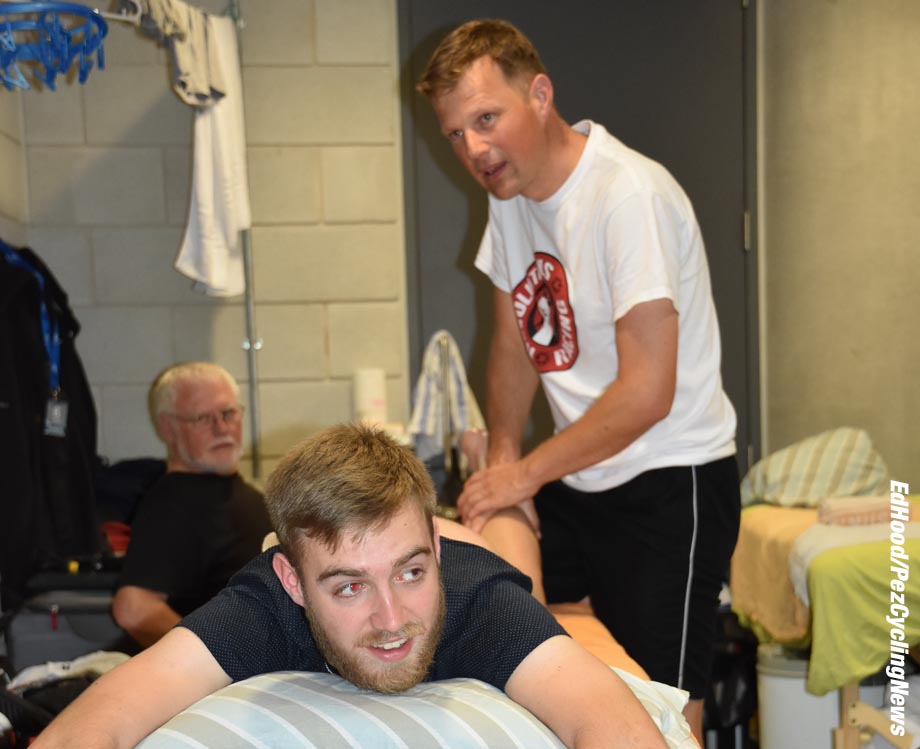