Canada won its first cycling medal of the Rio Olympics on Saturday, with a bronze medal in the Women’s Team Pursuit. The team of Allison Beveridge, Jasmin Glaesser, Kirsti Lay and Georgia Simmerling beat New Zealand with a time of four minutes and 14.627 seconds for 4000 metres, which is a new Canadian record. Great Britain won the gold ahead of the United States in a world record time.

The Canadian team faced the defending Olympic champions, Great Britain, in the semi-final round in the morning session and lost when the British team set a new world record. However, the Canadians set the third fastest time of the session at four minutes and 15.636 seconds, to qualify for the bronze medal race.

In the medal final, Canada took control of the race from the start and were over six-tenths of a second ahead after the first 1000 metres. By the mid-point of the race the lead was above one second, and at the end the Canadian squad finished nearly four seconds in front of their opponents. The fifth member of the team, Laura Brown, rode in the qualifying round and also received the bronze medal.

Jasmin Glaesser, the only returning member of the bronze medal-winning team from the London Olympics, said “It was a great ride. Four years ago, it was a little bit of a surprise, but this time around [a medal] was our goal and focus, and this is the result of four years of hard work. To put it together on the day, when it matters, is an incredible feeling. Qualifying was a disappointment because we knew we had a lot more, but every ride since then we’ve taken seconds off of our time, including setting two national records today. the ride this evening was really incredible, and it felt like every one of us left it all out there and didn’t hold back. You can’t ask for more than that when you are riding at the Olympics.”

“This isn’t that fastest track out there, but this is the highest level of competition since this event changed from three riders to four after London. I think that trend is just going to continue through the next four years; the depth in the sport is really growing, and you can see that with the riders we’ve been able to ride in the last couple of years. I fully expect that the time is going to keep dropping, and it’s great to be at a race like this when everyone brings their A game.”

Additional Quotes
Kirsti Lay: “We switched a few things up from the first day, but mostly we stuck to what we knew and I think that’s what got us faster. We stayed with our game plan and went back to the basics. You tell yourself it’s another bike race, but there’s a lot more emotions on that start line. But we tried to stick to what we knew, and be calm and focus on the process, and then the outcome would be there.”

Georgia Simmerling: “We had to come together really quickly, and we did that. We rode faster every single ride, and put it all on the line. I’m so, so, so proud to be a part of this team and to finish that ride with the girls that I rode with. I never thought it was possible.”

Allison Beveridge: “We were definitely disappointed with our first ride [on Thursday]; we knew that we had more. So we cleaned up technically and executed much better both in this morning and in the medal ride. We left it all out there and we have to be happy with what we did. Hats off to GB and the U.S., but I think we can take satisfaction with what we accomplished. we knew that it would be fast and that the world record was going to fall. It’s true what they say: the Games atmosphere really brings out best of people and everything comes together.”

Laura Brown: “I got to ride in qualifying, and it was an honour. It does feel special to participate; I’ve been looking forward to this moment for a long time; to be on the track and ride at the Olympics, and I couldn’t think of a better team to do it with. I love these girls and it is such an honour to line up with them.”

National coach Craig Griffin: “I knew the first ride wasn’t a great ride because there were some nerves, but the first ride was more about understanding the track, because we didn’t have a test event here and didn’t have any race data. There’s two great teams out there in Great Britain and the U.S. – we’ve seen that the last few years – and I knew it was going to be tough. You’re never confident, but you hope you’ve done your homework and put everything together. But to get everyone here and race, and break the national record twice and get it down to 4:14 says a lot about the program and the athletes and the staff behind the athletes.”

Jacques Landry, High Performance Director: “It’s a bit of a monkey off our back, to get that first medal, so we can start breathing and focus on what we do best, which is performing. Really happy about the medal; the girls executed really well, and the results speak for themselves. We demonstrated repeatedly with the women’s team pursuit program that we can consistently deliver results, whether it is world championships or World Cups, and now with two bronze medals. But I think it is also important to show that we have a system behind these athletes and also building up other athletes behind these ones, so we can continue building champions towards 2020.” 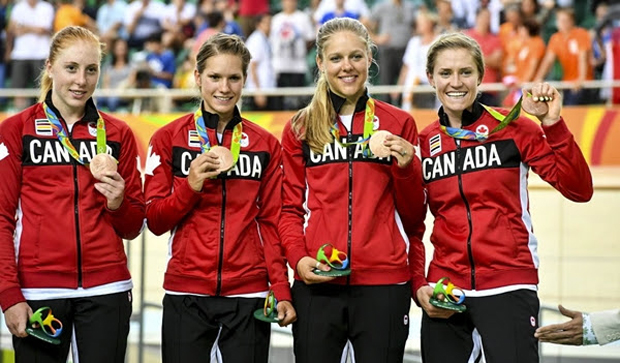