Race Report: We all knew what was likely to happen; but when it did, it was none the less impressive, as Fabian Cancellara (Switzerland & Radio Shack) attacked the peloton on the last climb of the Oude Kwaremont, distanced final companion Sagan on the Patterberg and rode the last 13 kilometres in solitary splendour at speeds up to 58 kph to take his second Ronde victory in the Grand Manner.

Second favourite Sagan (Slovakia & Cannondale) finished exactly where the bookies said he would, with Jurgen Roelandts (Belgium & Lotto) making sure there was a home presence on the podium. 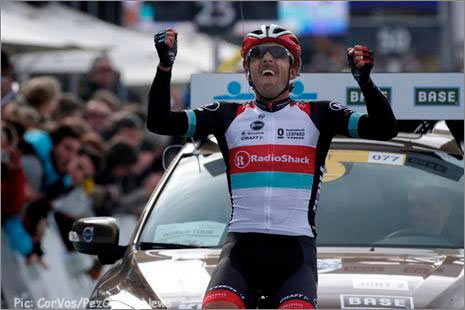 The day started badly for the home nation . . .

Last year it was Cancellara’s turn to crash out, this year it was Tom Boonen’s (Belgium & QuickStep) – Sagan best be careful, next year. 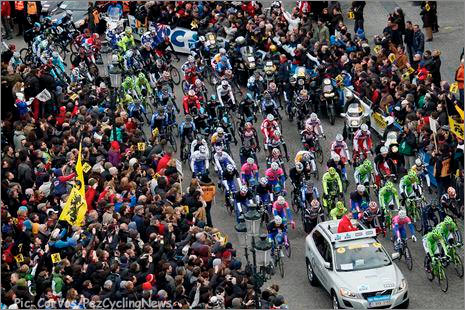 A million Belgian hearts sank as the Belgian Champion’s run of appalling luck continued when he hit the deck with less than 20 kilometres of racing under the wheels, and was forced to retire.

With 200 K to go a shocked peloton was still together; Movistar’s British Time Trial Champion Alex Dowsett was among those who had been up the road – but nothing was being let go.

The peloton was all too aware of the tactic of putting riders up front who the ‘Bigs’ can then leapfrog up to. 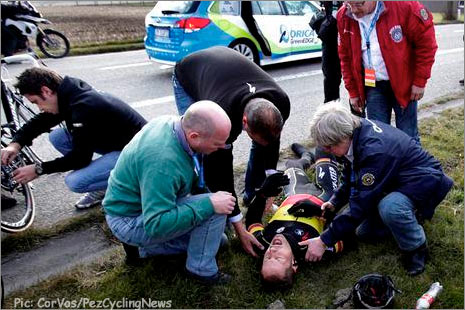 Boonen’s day – and Belgium’s hopes for a win – ended after just 20km.

The first climb of the day was the Tiegemberg at 91 K and the inevitable attacks came off the summit.

On the Eikenberg (119 K) the gap was just under three minutes, a nervous peloton wasn’t going to let the gap get out of hand.

The Molenberg (134 K) saw the gap to the break down below the minute; with Europcar doing the damage – Voeckler obviously in better shape than he’d been letting on. 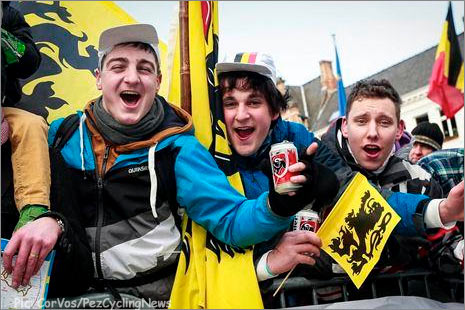 Surprisingly, it was Lotto’s giant German sprinter Andre Greipel prizing a counter move clear on the Molenberg along with Marteen Tjallingii (Blanco), Michal Kwiatkowski (QuickStep) plus Yohann Gene and Vincent Jerome both Europcar.

This group merged with the seven to make 12 at the front with some 115 K to go; but still the peloton was cutting them no slack – not with the whole Radio Shack team on the front.

But any opportunity to see Hondo in action is a good one – still the coolest man in the peloton for me.

With the gap dwindling, Marcel Sieberg bridged up to the break to make three Lottos up front.

The Radio Shack men’s faces gave nothing away as they churned the gears at the head of the peloton – Cancellara was using up legs very early.

The Rekelberg (148 K) came and went and coming in to Berendries (154 K) the break began to fragment as Sagan flung a stoker into the boiler room.

With 100 K to go only six remained up front; Greipel, Sieberg, Kwiatkowski, Bol, De Vreese and Tjallingii and coming in to the Valkenberg (159 K) they had 35 seconds – largely due to Sieberg’s hard work.

With 20 K plus between the top of the Valkenberg and the first ascent of the Oude Kwaremont it was time to stretch, shed leg warmers, take on food and water – allowing the six to stretch their lead out beyond the minute with a counter move of three somewhere in between.

Sieberg was the locomotive at the front as the gap eased out beyond the 90 seconds, then to 1:40 with 85 K to go – but the race is the last hour.

The approach to the Oude Kwaremont (182 K) saw the torpor lift in the peloton as the six kept calm up front, with three in between (including Stuey O’Grady) washed away.

It’s so much easier to ride the Kwaremont in a small group than back in the madness of the peloton where cage fighting skills are required to hold position.

And then there were five – as Bol cracked and slipped back.

The Paterberg (185 K) is steep, cobbled, nasty but still with a big peloton and the gap down to 26 seconds to the break.

But it’s even worse in the peloton, the leaders charged it but half way back there were feet down, riders walking – chaos.

It was over for many once the dust settled – no real sort out, but still 90 minutes racing to go and the break still one minute clear across the cobles of Mariaborrestraat at 196 K.

Steenbeekdries (197 K) and the five continued with their mission which could only end in one way.

Greipel and Sieberg showing their strength; with Hayden Roulston doing the same for Cancellara at the head of the peloton.

Cancellara punctures with 54 K to go, rear wheel, he keeps calm, glugs from his bottle; The Shack mechanics are pros and he’s back on the Trek in a trice.

And still the five are clear, the gap is back over a minute – Greipel the surprise, one couldn’t see Cav doing what the man from Rostock has done, today.

Reinforcements – Mirko Selvaggi (Vacansoleil) and Sebastien Minard (AG2R) make it seven in front; but the gap is shrinking – 48 seconds.

The Kruisberg (209 K) and the end must be nigh for the break – 33 seconds as behind the ‘Bigs’ begin to get serious.

Elia Viviani works for Sagan – it must be nice to have a man like that in your service.

The finish loops get smaller now as they approach the Oude Kwaremont (219 K) for the second time – the break begins to fall apart except for a surprisingly comfortable Kwiatowski with Selvaggi and Le Gorille hanging in.

Gregory Rast drives the peloton for Cancellara but it’s not a bloc – that is until they’re over the top and it explodes.

And Geraint Thomas (Team Sky) is down – again; just like in Het Nieuwsblad and The Primavera – hard to come back from.

Seven at the front, now – but the cavalry charge is just behind, 15 seconds the gap.

Cancellara has to go there or on the Patterburg, there a lot of rapid guys still alive and kicking – Bozic, Kristoff and Paolini to name but three.

The seven have 30 seconds as Stijn Devolder grinds it out for The Shack – Sagan and his team mates are getting an arm chair ride, here.

QuickStep now, riding hard, Pippo is still there in what is a big group.

Roelandts and Hinault are first on the Oude Kwaremont – and Roelandts is alone, driving hard.

The rest of the break passes in Indian file.

Cancellara goes, but Sagan is in his jersey pocket – the remarkable Kwiatkowski hops aboard – Boasson Hagen (Sky) and Chavanel (QuickStep) can’t.

The two come up to Roelandts; that’s three in the lead – and this looks like the podium.

There’s just the Patterberg to come with 14 K to go – Cancellara has to go again if he wants to win. 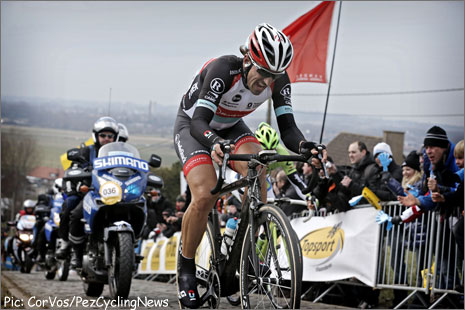 The Swiss blasts, Sagan tucks in, Roelandts is gone. 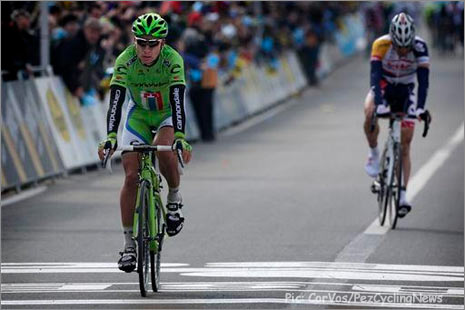 Sagan is laché, Cancellara is alone; can the Slovak come back – it doesn’t look like it.

Cancellara is flying off the top, Roelandts and Sagan get together but they look dead.

Cancellara stretches the gap – 30 seconds at 10 K to go, remarkable.

Inside the last K and Cancellara shakes his head, the last look back, the wave to the team car, hands high – a ride of real quality.

It’s a minute and more before Sagan and Roelandts appear; with the young Slovak too quick for the home boy.

Kritoff is fourth, but it’s academic, this day was all about one man – Fabian Cancellara.