The gap peaked at seven minutes with Sky – and Knees in particular – making sure there was no huge fissure opening up – as we said last week, the days of the break going 17 minutes are gone. Katusha leant a hand although it’ll be hard for Kristoff to win given that no one will cooperate with him in the finale (we thought!).

Oudenaarde for the first time – past Pez’s favourite bar, the Carillon, aaahhhhh!

The Oude Kwaremont and the sun has brought out the fans – but the third time up here none of these eight riders will be in the frame. Sir Brad tastes the tar as the peloton approaches the Oude Kwaremont; Sky back off with the gap to the break at 5:27 as Brad throws 10 grand’s worth of Pinarello to the deck as he changes bikes. Brad makes it back but there are 200 riders in front of him – hard on the head. . . 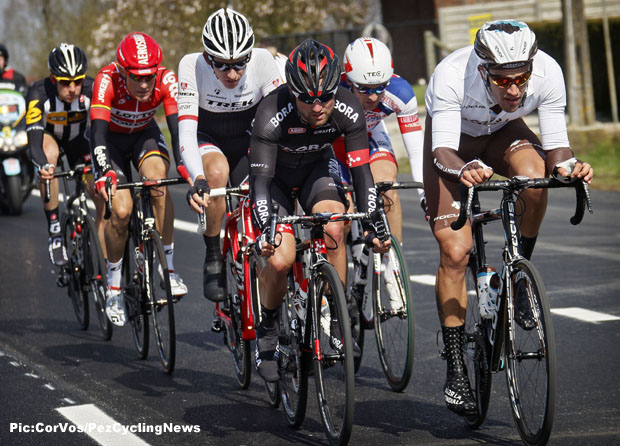 The break is working sweetly over the Kortekeer with the gap at almost six minutes – some big strong boys in there; Bak, Gaudin, Sergent and Brammeier. Wiggins is off again to change bikes so Sky ride tempo as the break goes back over six minutes.

The fourth climb of the day; the Eikenberg and break is still looking sweet with Frapporti leading them over – with Sky and Katusha at the head of a big peloton. The good weather means that there will be more riders in the mix for the duration – the cold and rain breaks the heart of 50% of the field before they even start. Team Sky mass on the front on the Eikenberg whilst their knight of the realm languishes at the very back – not a good sign.

Elia Viviani is in there for Sky, a far cry from the smooth boards of Grenoble Velodrome where PEZ first met him. Luca Paolini (Katusha) is back in the cars but no panic. Meanwhile, Matt Brammeier has gone it alone from the break briefly, before the break gels again as IAM Cycling come through to lead the peloton – Quick-Step meanwhile adopt a very low profile.

Paolini is back in the bunch and still dressed as if on a training run – there are 140-odd K under the wheels but the race hasn’t even started for Luca. The Mollenberg and surprisingly it’s Greipel (Lotto) who turns it on and goes clear – to keep the pressure off team mate Roelandts no doubt. The gap to the break is well under four minutes as the peloton changes shape from bunch to string.

Brammeier forces it in the break, there’ll be no top result for MTN today but Big Matt has shown the flag well; his breakaway amigo Bak looks very strong to us – we think he’ll jump before the junction is made and try to go again.

With 110 K to go riders are starting to ‘pop’ as a crash halts the rear end of the peloton and there are men taking to the grass – including Sir Brad. That was Langkawi winner Youcef Reguigui on the deck at the bottom of the pile in the peloton – and now it’s big Jesse Sergent’s time to go down as the Shimano service car takes the Kiwi out of the break. The other breakaways remonstrate with the car driver, small wonder; that was appalling – it looks like Sergent’s collar bone has gone.

The gap is four minutes now as Orica-GreenEDGE, Wanty-Groupe Gobert and Tinkoff-Saxo all stick their noses in the wind at the head of what is still a big peloton. The Haaghoek cobbles – two K of granite sets with 100 K to go and the break has 3:34.

Next is the Leberg and another crash in the big peloton – the good conditions mean there are so many more men in the mix. Meanwhile, the break attacks Berendries as Brammeier’s head begins to roll – but Bak still looks very strong. Sky lead on Berendries with Viviani still to the fore with Eisel; and Thomas vigilant – 90 K to go; it’s not been a scintillating race thus far.

Valkenberg and the peloton is cruising with the break still at 3:25 as more crashes come due to the riders stalling at the back of the bunch with the low speeds. Sky continue to tap it out; Kristoff will be happy thus far; the other favourites will have to start thinking about getting rid of him and Degenkolb (Giant) – the distance and bergs are what should be chipping away at the sprinters but the mild weather and steady riding on the bergs is playing into the sprinter’s hands.

The Last 80K
Inside 50 miles to go the gap is under three minutes as the six hit the Kaperij climb – as the Shimano car causes more havoc, tail ending the F des J car when it stops to service its rider. Bak and Guadin have gone clear of their four erstwhile companions as two’s and three’s try to bridge across – but Sky are massed at the front of the peloton. Rupert Murdoch’s boys are burning a lot of watts, today.

The Kanarieberg sees Bak and Gaudin start to show weakness for the first time – but they still have three minutes. The chasers have started to get things together and now we have around a dozen chasing – Greipel (Lotto Soudal) is there, so too is Thurau (BMC), Vanspeybrouck (Topsport Vlaanderen-Baloise), Docker (Orica-GreenEDGE), Juul Jensen (Tinkoff-Saxo), Dillier (BMC) and the four who came back from the break.

Sky are going crazy with 61K to go but Knees, Viviani and Eisel must all pop soon, they’ve been working too hard to survive. The chasers have been absorbed but Bak and Gaudin grind ever on – job done with all that TV time for their sponsors. GreenEDGE come up to help Sky – why, we have to wonder?

Oude Kwaremont for the second time – Bak and Gaudin are hurting as Debusschere (Lotto Soudal) leads the peloton with Pippo Pozzato (Lampre-Merida) looking just so cool. The two desperados have 32 seconds on a little group of Debusschere, Pippo and Lampaert (Etixx – Quick-Step) but it’s ‘on’ now and will all be back together by the top of the Paterberg. 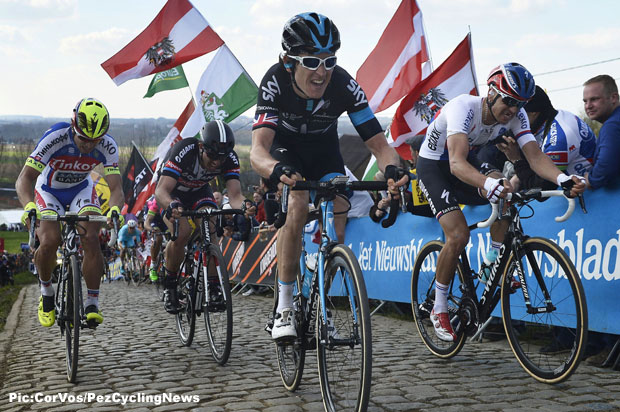 Thomas, Sagan and Stybar missed the move by Terstra and Kristoff

The final 50K
Gaudin is a beast – he’s still clear over the Paterberg with 50 K to go as Bak succumbs – but no shame; he’s one of the men of the day. It’s a much diminished peloton heading into the horror that is the Koppenberg; Gaudin has gone as Greipel attacks into the ramp of kasseien. Greipel leads, Sky well to the fore, with former double winner De Volder (Trek) up there too.

It’s over for many – Wiggins included as the inevitable stalling occurs and men push, carry and curse. Maybe 40 left over the top; Thomas, Stybar (Etixx – Quick-Step), Vanmarcke (Lotto-Jumbo) – as Lutsenko goes clear for Astana with Greipel and Chavanel (IAM Cycling) in hot pursuit – but they’re caught quickly.

Lutsenko still leads on the cobbles of the Taaienberg as it ebbs and flows behind; 35 K to go and the ‘Bigs’ are now ‘death racing’ – De Volder, Leukemans (Wanty-Groupe Gobert), Thomas, Roelandts, Sagan, Terpstra (Etixx – Quick-Step), Haussler (IAM Cycling), Greipel.

The Cut is Made
This is the winning move, 25/30 riders; inside 20 miles to go and the Kruisberg is another cobbled swine – Greipel is struggling on it but Stybar and Pippo look very good. Vanmarcke cracks – it’s over. 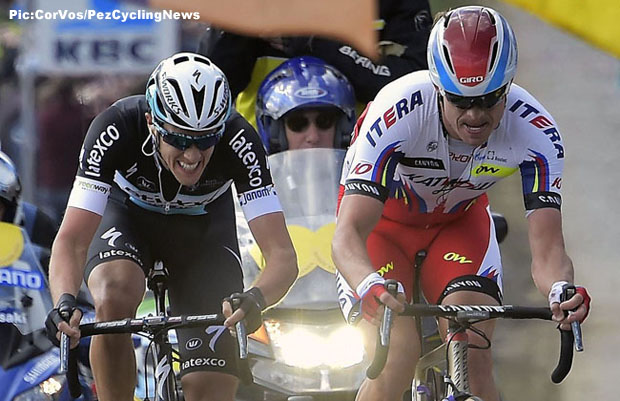 Did Terpstra stand a chance?

Terpstra believes he can drop Kristoff on the climbs; and if they get brought back then Stybar’s in an armchair – it’s down to Sky and Lotto to chase. Astana chase but the gap goes to a half minute as Sylvain Dillier (BMC) chases for GVA; Greipel chases for Roelandts – impressive for a man of his size – Rowe must be on his knees but keeps working for Thomas.

The Oude Kwaremont for the third time and surprisingly, Kristoff leads as Thomas and Stybar go after Kristoff and Terpstra – the Dutchman is flying and Thomas is strong but Stybar is in his pocket. They’re on the top road; Thomas is frustrated, GVA tries to go but Stybar locks on as they all look at each other. Oss takes it up for BMC as the gap goes to 30 seconds.

The Paterberg and Kristoff is strong, Terpstra has to do it here – but Kristroff is too strong. GVA goes, Sagan follows then Thomas, Boom (Astana) – up front they have 20 seconds. Kristoff is bestial but GVA and Sagan have the gap down to 15 seconds, 17 seconds, 18 seconds . . .

5K To Go!
GVA and Sagan don’t look strong enough to us – but they’re sticking to the task. Kristoff is majorly (copyright Sean Kelly) impressive, just so strong, those thighs drive like freight train pistons. The Terpstra/Kristoff two-up is looking good for the win; but Terpstra is game playing, missing spells at five to go – that’s risky, Niki!

Four to go and Kristoff is bear-like, Terpstra is cagey, trying to put money back in the bank for the sprint account. Terpstra freewheels, he’s leaving it all to Kristoff, sitting in, he’d make a good river boat gambler – but Kristoff is SO strong . . .

Flame rouge!
Kristoff leads, leads, leads – Niki jumps, no chance! Kristoff punches his heart – it’s a big one, for sure. Sagan sits up, GVA on the podium.

A great finale, a great winner and a Belgian on the podium – the Ronde didn’t disappoint us. 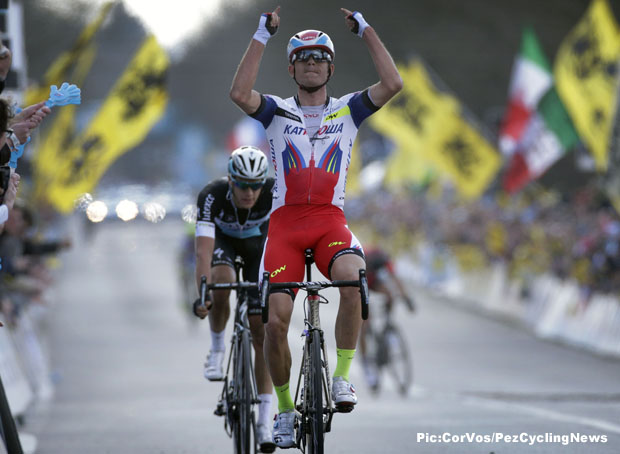 Marcel Kittel Out of Schelderprijs and Paris-Roubaix