Race Report: It all came down to timing, and Alejandro Valverde showed that he’s had plenty of practice when it comes to attacking on the Mur de Huy. Leaving his opponents floundering in his wake he easily won the slow-motion sprint as he sensed victory in the 2017 race, and a record-breaking 5th time at that. 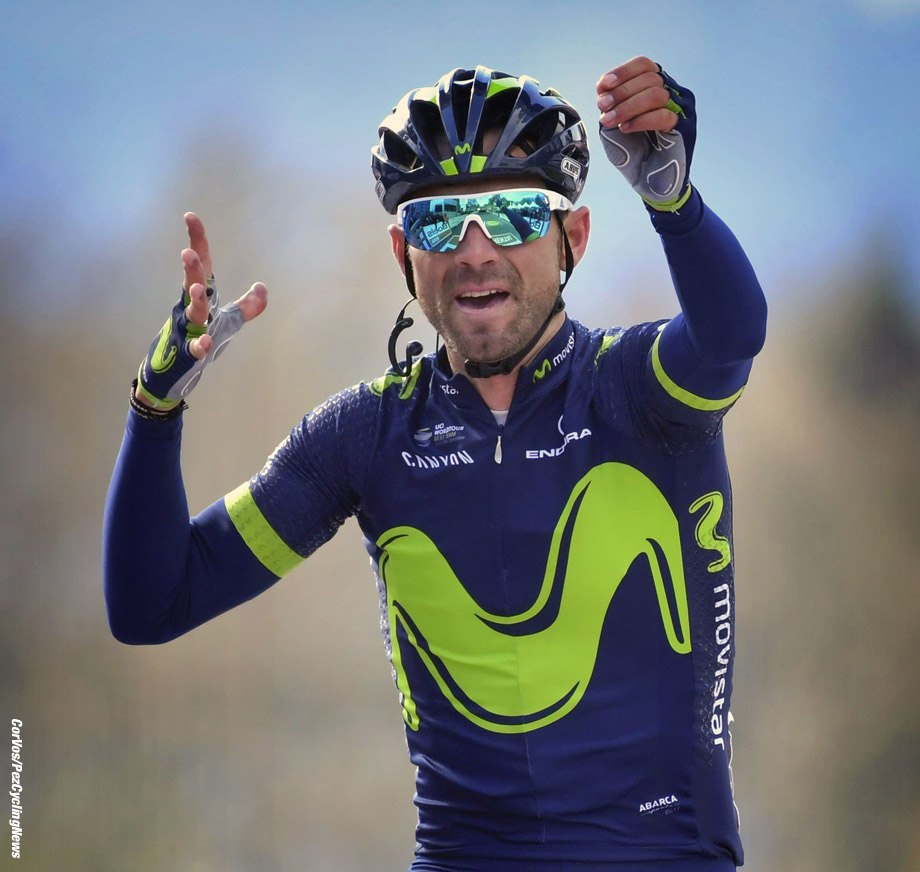 The Wallonne Arrow
There are Grand Tours and minor tours, monuments, classics and semi-classics… and then there are races like La Fléche Wallonne. Sandwiched between Amstel Gold and Liege this madcap race signals a change in attitude as some riders begin to think about Italy and we see others come to the fore as we head into the Ardennes. And this race always has a major stinger: what would you rather race up? Three separate hills where the climb is fresh each time or the same hill three times where the riders dread each ascent as it seems to get harder and harder each time before finally crossing the line. The Muy de Huy is quite literally a ‘wall’ and it will always produce a lung-bursting effort for the line. In years gone by it has always come down to the final climb to determine the winner so would 2017 see a shake-up or not? This is how it went down:

Heroes and Madmen
As the race rolled out of Binche, with 204.5km ahead of the riders, conditions were dry but chilly. News coming through from the Women’s race was that there was a bit of wind around the Mur which might cause trouble later on. The script for this race is that a breakaway doesn’t work but it never stops riders having a go and as soon as the flag came in, bikes were firing up the road.

The pace was high as attack and counter attack went away and eventually three riders got a gap. A couple of counters later and another three made the junction as the Movistar-led bunch began to relax. By the 33km point they had a lead of 5 minutes and by 70km it had settled down at 5:50. The six riders were: Olivier Pardini (WB Veranclassic Aqua Protect), Daniel Pearson (Aqua Blue Sport), Fabien Doubey (Wanty-Groupe Gobert), Yoann Bagot (Cofidis), Romain Guillemois (Direct Energie) and Nils Politt (Katusha-Alpecin).

And this was how it stayed as the main teams of Movistar and Team Sky were content to sit, watch and wait for the hills later in the race. 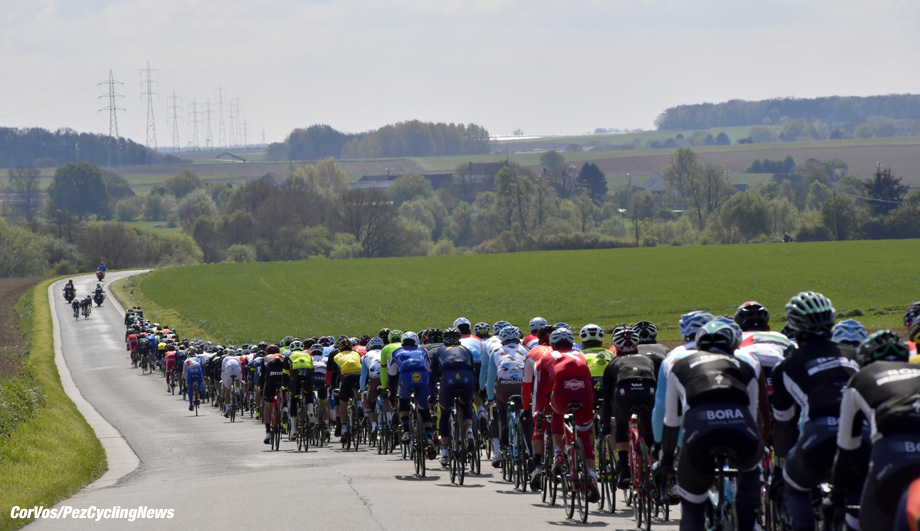 Fléche Wallonne Féminine
With the relative calm in the men’s race, the journalists in the Press Room were paying more attention to the women’s event where a big crash at the back of the bunch had caused havoc and a number of abandonments. Four leaders were up the road but their advantage was being eaten into by the fast-moving race.

And then it was down to two riders with 45 seconds as they closed in on the race finish. Ashleigh Moolman Pasio had crashed earlier but fought her way back to the front and she was the first to go it alone. She survived for a while before being hauled in and then it was the turn of her teammate Marie Vilman to have a go. With 20km to race she had a gap of 40 seconds but all of the main players were massing in the group behind.

Champions Attack
As the racers closed in on the finish three riders attacked the group and immediately passed the others out in front. They were Niewiadoma, Deignan and defending champion Anna van der Breggen. Not content with two Fléches to her name, and the win at Amstel at the weekend, the Boels-Dolmans rider attacked again and soloed to the victory making it a hat-trick of wins. Deignan rolled in for second with Niewiadoma, having been tailed off a little, taking third spot. 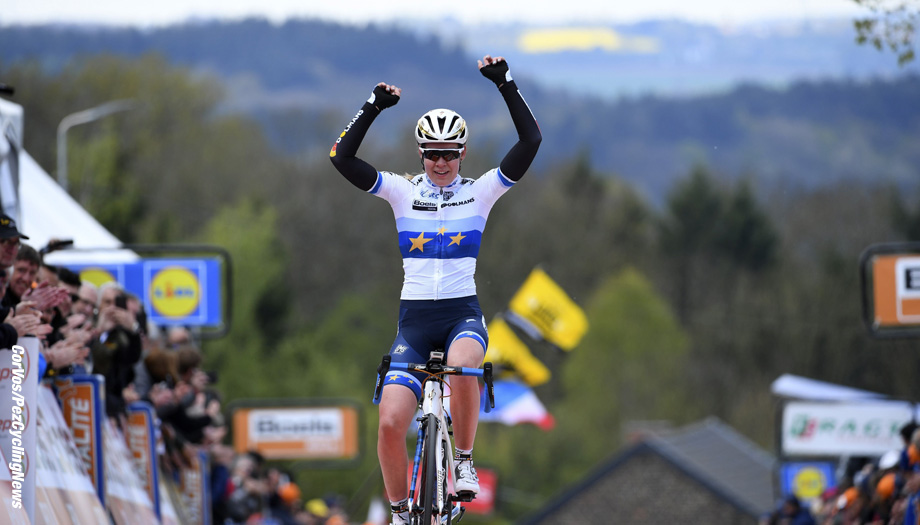 Waiting for Action
Back in the men’s race Movistar and Bahrain-Merida had begun to reduce the gap and it was sitting at just over 5 minutes as the race rolled through the feedzone at Pont de Bonne with 100km to go. This would come down steadily and with 70km to run, approaching the Huy circuit, the six leaders were holding just under a 3:30 advantage.

The journalists’ attention had once again wandered and now everyone was talking about the superb win in the Tour of the Alps by Team Sky’s Geraint Thomas, with his teammate Landa following him home. Erstwhile leader Thibault Pinot failed to get inside the deficit and Thomas took over as race leader. Could Team Sky do the same in Huy with Kwiatkowski and Henao? 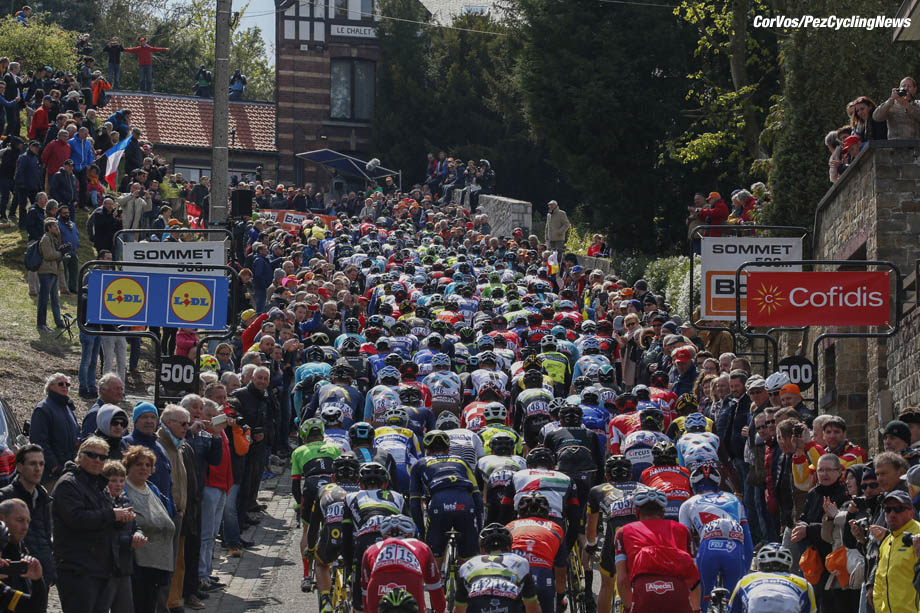 Approaching the Wall
Now proceedings were beginning to warm up. It kicked off with a heavy fall for Astana’s Michael Valgren as he clipped something on the road and tumbled off to the right against the crash barrier, forcing him to retire from the race. A little further up the road and Movistar’s Dani Moreno snapped his chain, leaving him chasing the bunch with a new bike.

Onto the Mur for the first time and as expected everyone was shedding jackets and warmers in readiness for the tests ahead. The pinch-point on the hill had thinned the main group down to about 40 riders while Politt had dropped away from the leaders as soon as the road went seriously uphill. With 55km to go, the five riders had 1:39 in hand.

Sea of Blue
With Movistar and Orica massing at the front of the bunch the breakaway was fracturing. Pearson had been dropped and Doubey didn’t last much longer. Three riders in front now and the Orica and Movistar teams were trying to stop any riders getting away at this point. That didn’t stop Alessandro de Marchi from BMC having a go and dragging other riders with him. This forced a reaction from the two leading teams and they put riders up on their tails to keep a close watch.

With riders spread between the bunch and the leaders, Team Sky now put in an appearance at the front of the bunch to protect their interests. And it did the trick as the De Marchi riders were reeled in leaving only the three leaders ahead by 30 seconds. 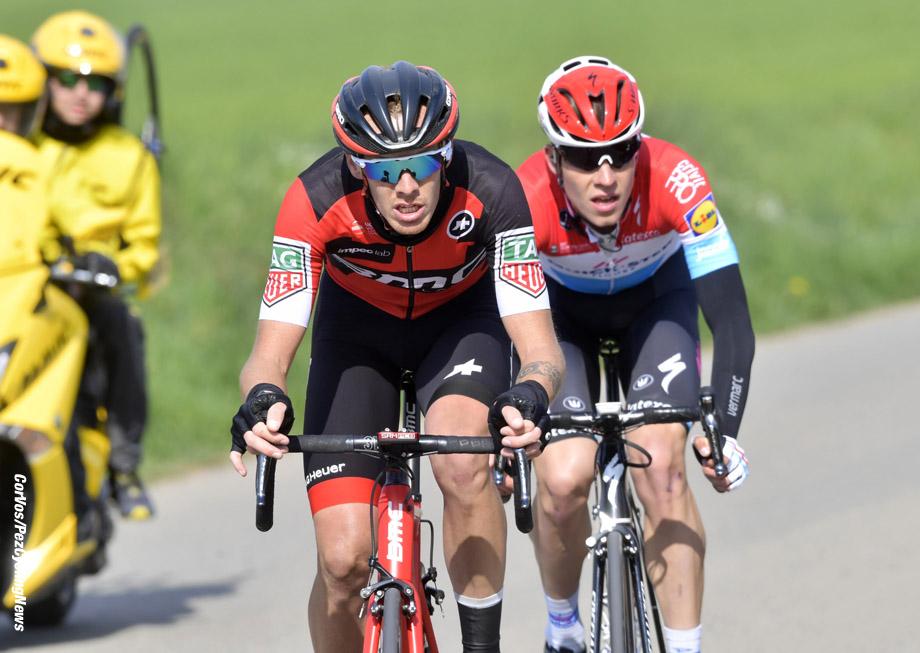 Situation Normal
Pardini was left on his own as the other two slipped backwards but coming to the top of the Cherave it was all over for the original group of six and Movistar, Team Sky and Orica were firmly in control once again. On the technical descent De Marchi slipped away again, leaving others desperately trying to get onto his wheel.

Onto the Mur for the second time and Quick-Step Floors had come to the front of the bunch. They could see De Marchi up ahead but he crested the summit on his own as Bob Jungels left his Quick-Step teammates and set off after the Italian. The two riders soon linked up and were holding a slim lead of 22 seconds as Movistar once again tried to control the bunch for the final ascent, although as it turned out, it was Orica who seemed to be doing the lion’s share of the work.

Pushing for Home
With the Cote d’Ereffe now out of the way, the two leaders only had the Cote de Cherave and the final climb of the Mur to go. They were working well as behind, the Orica riders were giving Movistar and the rest a free ride.

And now Jungels played his hand to perfection. Attacking on the descent he quickly dropped De Marchi and set about time trialling to the foot of the Cherave, and then onto the Mur, hoping beyond hope to get the enough of a gap to cover the final ascent. 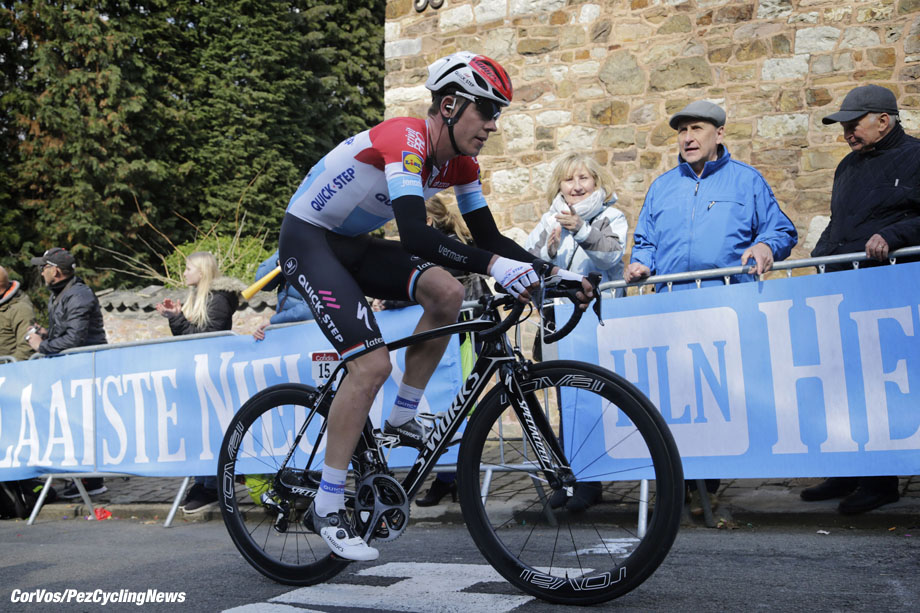 Onto the Cherave and he was still 50 seconds to the good as De Marchi was swallowed by the Orica-led bunch. Out of the saddle and pushing for all he was worth he was losing a little time…but not too much as Team Sky now hit the front of the bunch.

Rafal Majka (Bora-Hansgrohe) and Sergio Henao were pushing hard in pursuit now and had cut Jungels lead to 30 seconds as they all sped towards the final climb.

The Wall
Under the Flamme Rouge for the Luxemburger but Movistar had hit the front with perfect timing and the escapee was washed away. As the riders sped towards the top it was anyone’s race as we waited to see who would go first. Diego Ulissi (UAE Team Emirates) and Michael Woods (Cannondale-Drapac) were ready but it was David Gaudu (FDJ) who made the move. 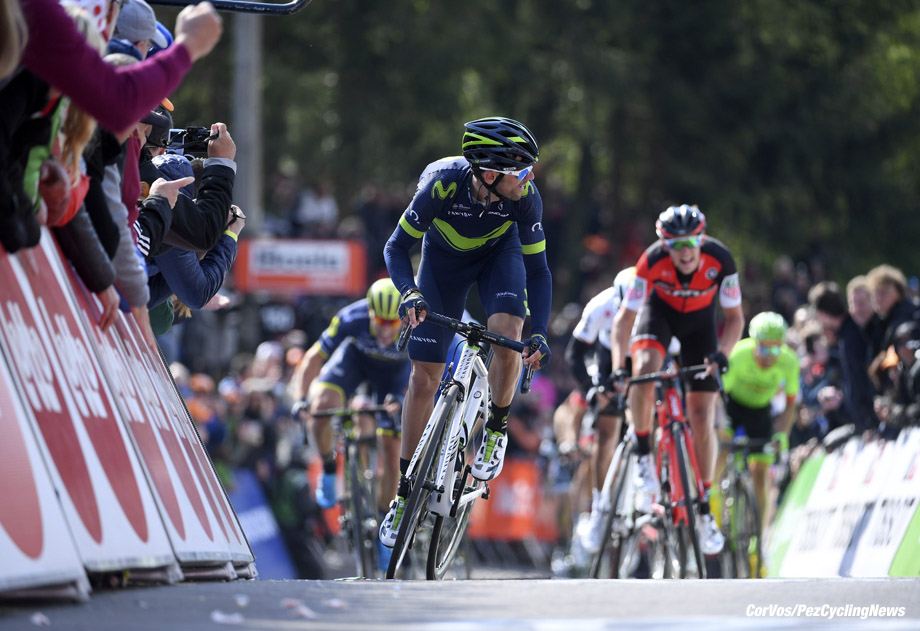 It was easily countered by Alejandro Valverde (Movistar) as he stamped his authority all over this race. Chased home by BMC’s Dylan Teuns and Dan Martin (Quick-Step), the Irish and Belgian riders simply could not match the Spaniard’s attack and Valverde took the win, his fifth in this event to become the all-time most successful rider in La Fléche Wallonne.

An obviously happy Valverde has perfected the timing of his attack on the Mur de Huy and he deserved the win today! 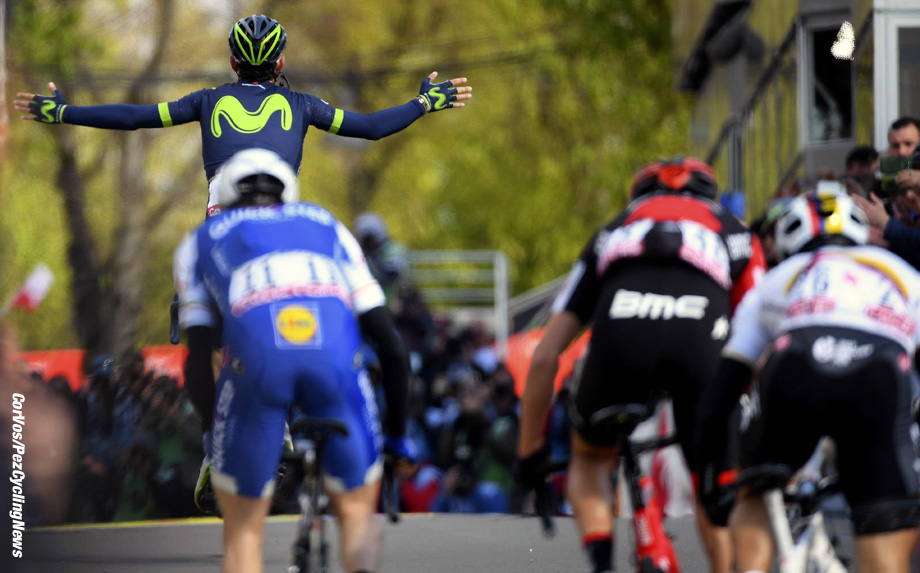