Race Report: Movistar were the dominant team of the day, as soon as the flag dropped the men in dark blue were on the front with one aim in mind – to get Alejandro Valverde across the finish line on the Mur de Huy first. The telephone squad rode like a sprint train to deliver ‘Balaverde’ in place to unleash his finishing jump for his fourth Flèche Wallonne victory.

Some might say that domination is boring, but when you see it performed perfectly you have admire the work put in by the team. There were breaks and a cheeky effort near the end, but no one was being given any rope by the Movistar team. Maybe not a classic Flèche Wallonne, but still impressive.

The Course
196 kilometers and twelve categorized climbs including three ascents of the Mur de Huy, the last time to the finish line. The Huy has an average gradient of 9,6%, but with much steeper ramps in places (see Pez’s Top Ride on the Huy here). The other climbs are all between one and two kilometers long and 4% to 8%. The Côte de Solières is longer at 4,3 kilometers but at a shallower 4%. The action tends to happen on the last climb of the Huy, but there is usually a wearing down process up to then.

199 riders started the race in good weather conditions; the one missing rider was Sky’s Sergio Henao due to the UCI opening an investigation into irregularities in his Biological Passport dating back over many years.

During a very fast first hour there were many escape attempts, but the peloton were not happy to let any of them get too much time. The break of the day was instigated by Dimension Data’s Steve Cummings who went solo early into the second hour of racing. He was joined by others to make a lead group of ten that slowly edged away.

After 101 kilometers the leaders hit the Mur de Huy for the first time with three and a half minutes on the peloton and at the top it was Bouwman of LottoNl-Jumbo over the line first. By the time they hit the Côte d’Ereffe, after 114K, Movistar and Katusha started to chase and brought the lead down to 3 minutes. 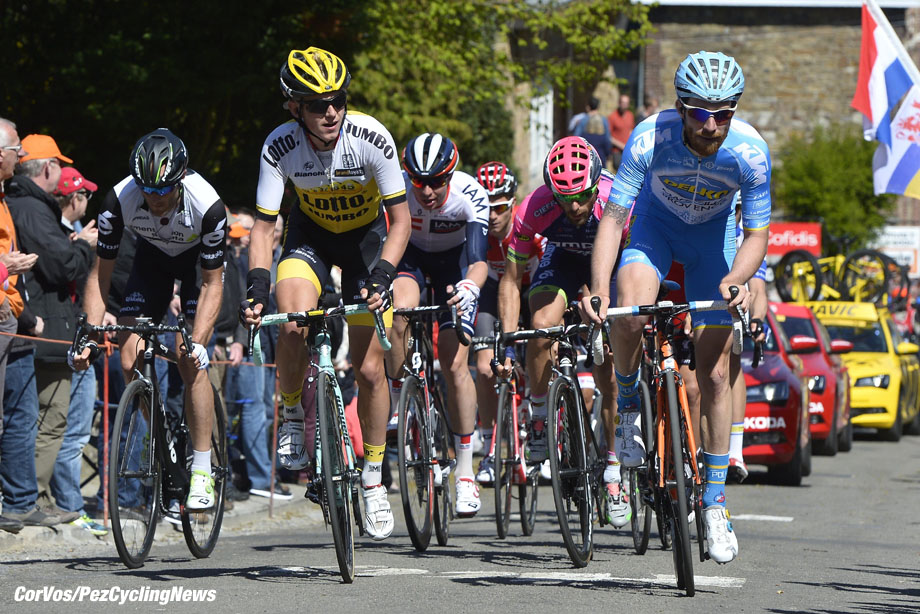 On the Côte de Bellaire the lead had dropped slightly to just over 2 minutes and then on the Côte de Bohissau (140km); Cummings attacked and was joined by Van der Sande, Dillier and Bono and as they entered the final 50 kilometers, the group had just under a minute on the others in the break and 1:50 on the peloton. Movistar were on the front, but other riders were moving forward, most obvious being BMC and Orica-GreenEDGE.

A crash in the bunch disrupted the chase and two Trek-Segafredo riders were left on the road and it looked like Frank Schleck was the worst off. The five leaders who were dropped by the Cummings attack were caught, but the lead was still at 1:30.

The peloton lifted the pace as they entered the final 30 kilometers as now Katusha, Orica-GreenEDGE and Astana were helping Movistar.

Dillier attacked on the second climb of the Mur, but Cummings was having none of it and jumped after him and then left the BMC rider on the road. Bjorn Thurau (Wanty-Groupe Gobert) and Ruben Fernandez (Movistar) came up from the behind as the peloton slowed on the climb to catch Van der Sande and Bono. Cummings had his head down and stretched his lead to a minute as the four were caught and Movistar took on the chase work again.

Cummings had the climbs of the Côte d’Ereffe and the Côte de Cherave before he hit the Mur de Huy for the last time. The big Dimension Data rider was looking good, but he was losing time. 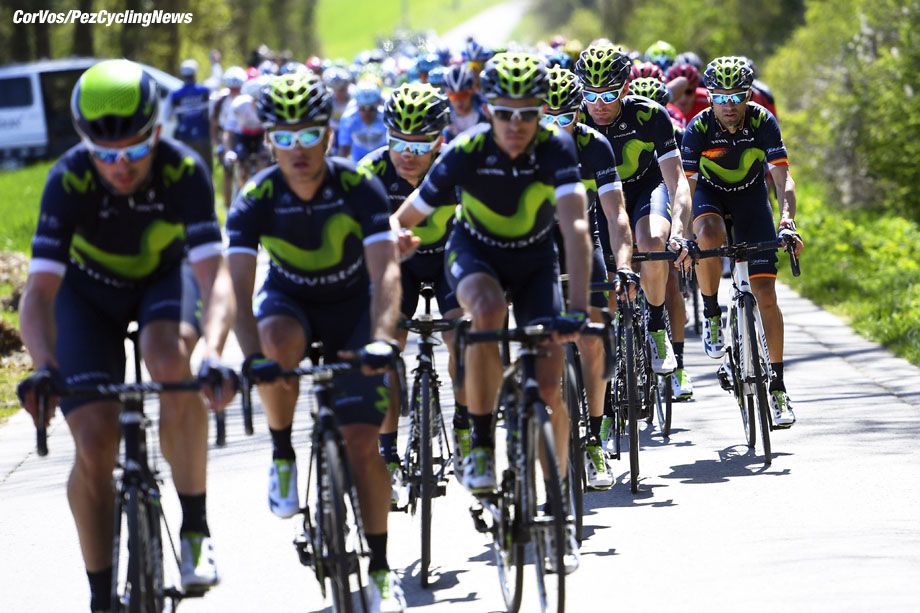 The front of the peloton was dark blue all day

Cummings’ hopes were dashed with 17.6 kilometers to go, at the back of the race there were a lot of riders losing their grip and falling back under the pressure of Movistar. Alejandro Valverde must be looking for his fourth Flèche Wallonne.

15K’s to go and Katusha sent four riders to the front Tomasz Marczynski of Lotto Soudal attacked. The Polish champion had no chance and was soon back in the fold. Next attempt came from Luxembourg champion Bob Jungels (Etixx – Quick-Step), Georg Preidler (Giant-Alpecin) and Ion Izagirre (Movistar). Izagirre was not going to work and the other two were not happy with a passenger.

With the bunch insight; Jungels jumped and Izagirre stayed with him, but Preidler was dropped. The peloton were about to catch the two when Izagirre put in a big effort to take them away again and take the pressure off Valverde. 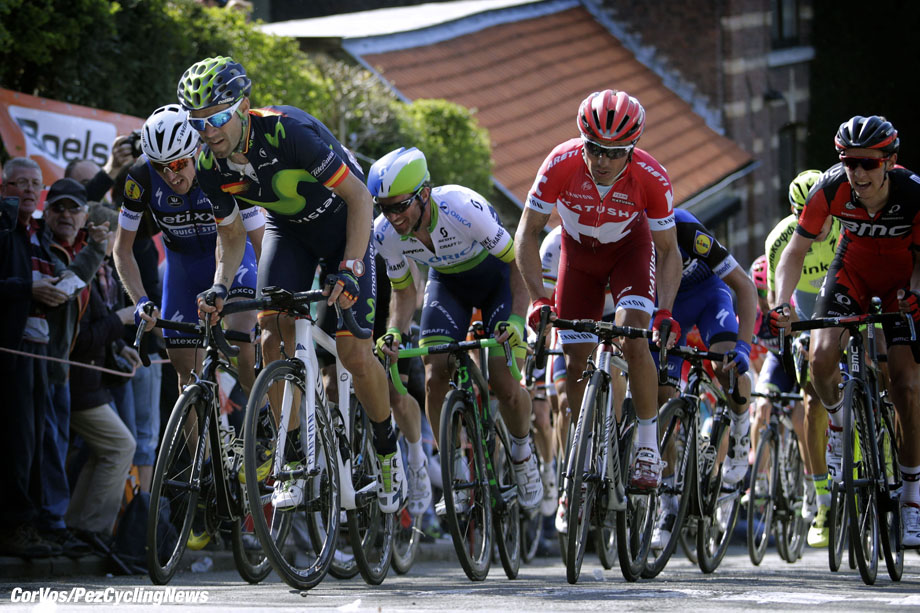 The top men were ready for the final push

The Finalé
Tim Wellens (Lotto Soudal) flew across to catch Jungels/Izagirri with 3 kilometers and the Huy to go. Strangely the Etixx team was on the front, but was not stalling and were at full gas to catch their own man – Jungels. They must prefer Dan Martin or Julian Alaphilippe and as the race started the Huy for the last time the three adventurers were caught.

The race hit the Huy and all the top men were there: Valverde, Martin, Rodriguez and Albasini.

Rodriguez leads before Martin attacks, Valverde holds him with Alaphilippe on his wheel. Martin can tell he had gone too early as the Spaniard passes him with the two Etixx – Quick-Step riders scrabbling to hold the rear wheel of his Canyon. 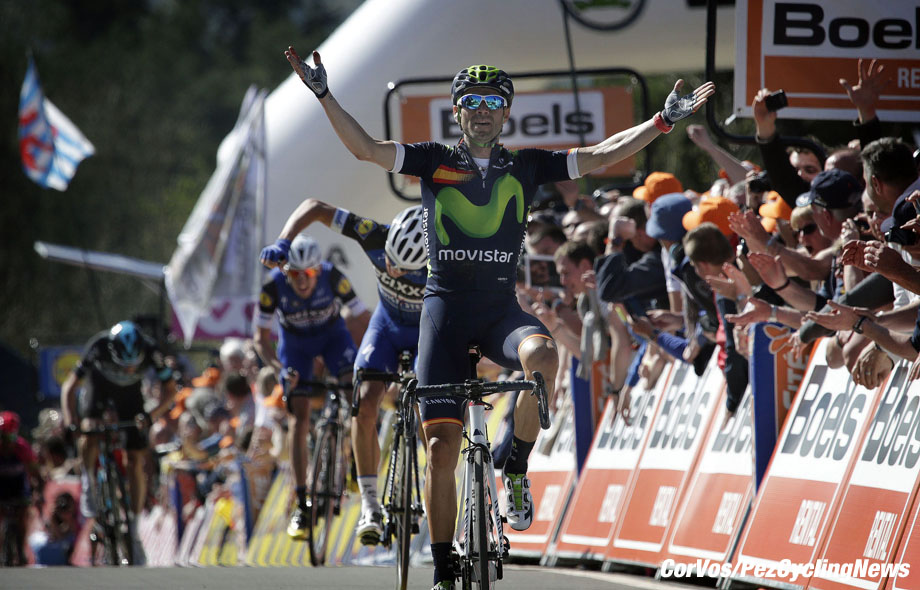 Another Flèche for the ‘Green Arrow’

Valverde kept the power on all the way to the line to take his fourth win the Flèche Wallonne and puts himself at the top of the favorites list for Sunday’s Liége-Bastogne-Liége.