Race Report: It’s like going back to school after the holidays to find a new kid in your class. Suddenly, everyone’s whispering in the corridors, passing notes, comparing opinions. But how will “New Kid” change the school dynamics? Better-looking? Smarter? Cooler? Second-toughest knucklehead? The Côte de Cherave slouches against the lockers, 5.5kms from the finish, as the Mur de Huy eyes the cocky newcomer.

As we’d see after five hours in the saddle, the new climb played a part, but the old school smarts of a two-time champion gave us a Fleche-Wallonne winner that was no surprise.

School reconvened for the Waalse Pijl in Waremme this morning, with all the chit-chat about the inclusion of a new climb, something that could throw a very nervy cat amongst the pigeons so close to the finish. Suddenly, it’s not all about the Mur de Huy any more; just before one of the most iconic climbs in pro cycling inflicts pain and suffering on the peloton, there’s a new obstacle. The Côte de Cherave isn’t long, but the approach is complicated by narrow roads, urban cobbles, tram tracks, tight corners and then a ramp that looms straight up. Maybe, just maybe, it’ll mean an escape makes it to the Mur alone for the first time in over a decade.

With the bulk of the nastiness in part two of the race, the break stretches a lead towards eight minutes. Katusha for Rodriguez are the one team making a show of keeping some sort of a handle on the break’s whereabouts. The Côte de Bellaire and the Côte de Bohissau deliver the first one-two punch and De Gendt looks like the break’s main engine as the gap holds steady.

Rolling to the Mur de Huy for the first passage of three, Tiago Machado (Katusha) and one of the pre-race favorites Dan Martin (Cannondale-Garmin) tangle and the tumble-prone Irishman comes out of it the worst. He gets paced by a couple of team-mates, but a worrying gap opens to the peloton. 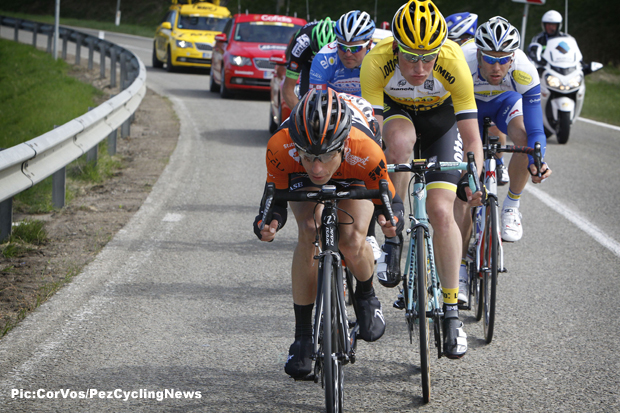 70kms to go
With the Côte d’Erreffe behind us for the first time, and the break’s advantage has dipped under six minutes – Etixx – Quick-Step pull Kwiatkowski up the right-hand side of the peloton.

It’s a beautiful day in the Ardennes, the sun beaming down, and t-shirt weather for the spectators. It’s a beautiful day, too, for Rabo-Liv’s Anna van der Breggen who bridges late to the Dutch duo Roxanne Knetemann and Annemiek van Vleuten, before exploding away from her challengers on the Mur to win La Fleche Wallone Feminine, ahead of van Vleuten and the USA’s Megan Guarnier. Maybe, just maybe, the broadcasters might think about showing the ladies hammering it out on the run-in to the Mur when the guys are just cruising towards the last couple of hours of racing? Please?

60kms to go
Baugnies suddenly ramps the pace up and prompts a little split – looked more like handbags at dawn – and it’s back together as they hit the Côte de Bellaire again which definitively unships Mike Theunnisen and then Reinier Honig. Pete Kennaugh leads a Sky-peloton up the climb not more than three-and-a-half minutes back.

50kms to go
There’s a chain reaction crash – a badly parked car on the roadside, and the dominoes start to fall. At the bottom of the heap are Chris Jones (UHC) and Philippe Gilbert (BMC) who both abandon.

Hitting 40kms to race, and with the Côte de Bohissau under the wheels the break’s lead dips below two minutes. Movistar and Katusha are patrolling the front as another crash leaves Anthony Roux (FDJ) and Sky’s Wouter Poels half-hidden in a ditch. 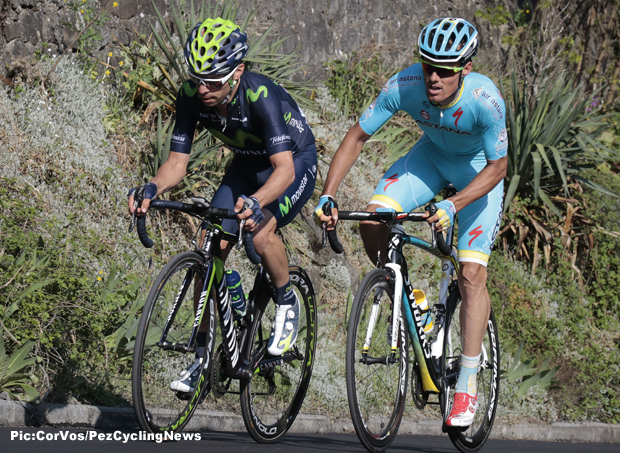 A late attack from Visconti and LL Sanchez, to soften them up?

Thirty to go
The Mur de Huy looms for a second time, and another crash disrupts the peloton with Jelle Vanendert sitting on the kerb as if he’s just watching the world go by. Inside a minute for the escapees now as the breakaway starts to disintegrate. It’s now De Gendt and Baugnies clear ahead, as Luis Leon Sanchez (Astana) and Gio Visconti (Movistar) make a move, picking up Dani Ratto on the way.

25 clicks to race with Katusha, Etixx-QuickStep and Lampre-Merida heading the chase, with now five guys up front as the Côte d’Erreffe is next up. It’s 30 seconds for the quintet as they enter the last 20 kilometers. Tejay van Garderen (BMC) jumps on the bottom of the Côte d’Erreffe as De Gendt blows a little higher up. TJVG and Louis Vervaecke combine, but they’re pulled back as Visconti and Sanchez ditch the last of the original breakaways up front.

12 to go and another big crash on a sweeping downhill right-hander takes out three IAMS, two BMCs, two Roompots … and Chris Froome. Sky’s ex-TdF champ gets a push off but looks thoroughly unhappy, battered, bruised and bleeding from the left hip. 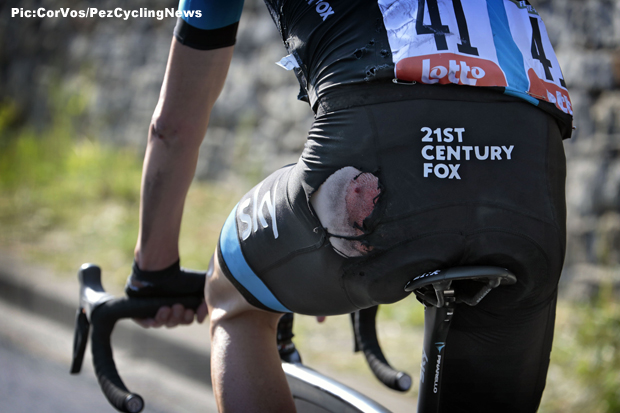 Crash for Froome, but not too bad

The finalè
Inside ten to go, and one of the remaining upright Roompot’s, Huub Dujn, briefly takes off as the lead duo have twenty four seconds. Etixx-QuickStep and Ag2r lead the peloton as Sanchez and Visconti batter over the cobbles and tram tracks on the run-in to the Côte de Cherave. Nibali jumps from the bunch, marked by Kreuziger and Alaphillipe; that spells the end of Sanchez and Visconti.

Lotto-Soudal’s Tim Wellens then has a go and leads over the top as Katusha’s Caruso tries to join him. Movistar chase, but Nibali is in third wheel. Wellens is hunched low over the bars as he hurtles to the base of the Mur for the final time with twelve seconds in hand. Lampre-Merida for Rui Costa take over the chase, as Wellens sees the Mur ramp up ahead of him.

About 35 guys are together as the Mur bites deep, and Wellens is pulled back.

With 250 meters to go, still no-one is willing to risk too soon, as Valverde holds a front position. Then Valverde goes right and is the least fatigued guy, grinding away to a third win. A brilliant sprint from young Julian Alaphillipe takes second and Michael Albasini does a super job for third. 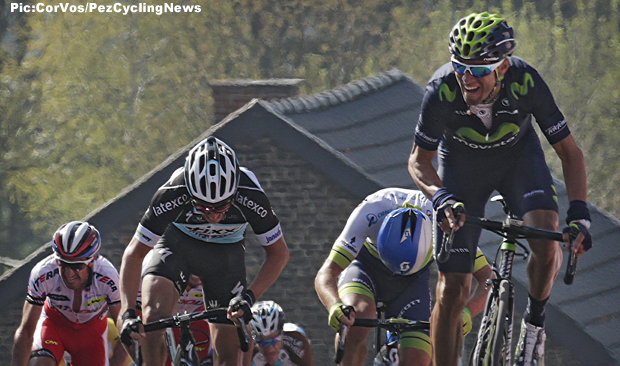 Valverde had the jump… again

I reckon the Côte de Cherave might just have carved out a place as the new kid in class that takes no prisoners. The Mur de Huy has a rival in class.

America Tour to Kickoff at the Philadelphia International Cycling Classic

Area Zero-D’Amico-Bottecchia: Ready for the Tour of Croacia