Gent-Wevelgem’18: Sagan, Who Else?

Race Report: World champ Peter Sagan claimed ‘the Windy Classic’ for the second time in three years after out-sprinting Italy’s Elia Viviani and France’s Arnaud Démare on the home straight. The ocean-eyed Slovakian showed sparkling form ahead of bigger races to come and took the bouquet in Wevelgem after an uneventful but sapping five hours of racing. Belgium’s Philippe Gilbert also impressed before the defense of his title in de Ronde next weekend. 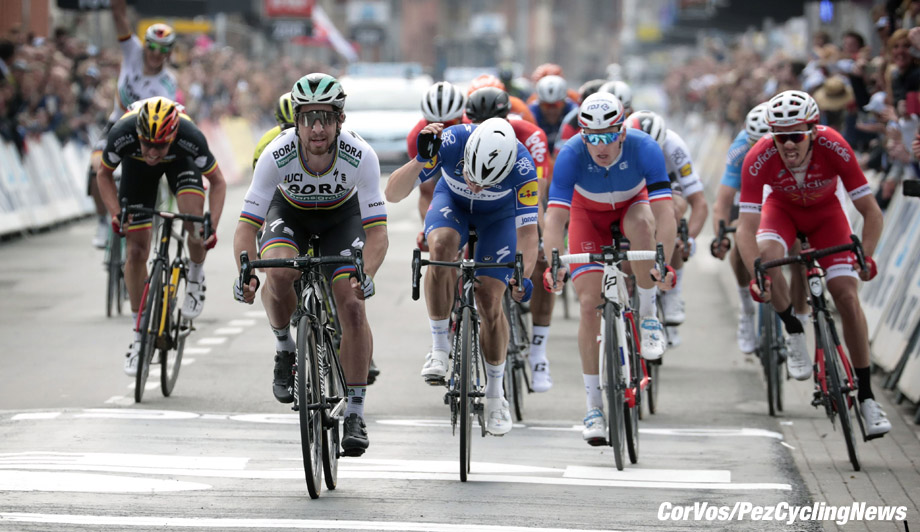 Where Kuurne-Brussel-Kuurne has its donkey and de Ronde van Vlaanderen its lions, Gent-Wevelgem, the latest race on the Belgian cycling calendar, has its ghosts, and that of Antoine Demoitié, the talented young Walloon killed on its roads two years ago, hangs over this race as a reminder of its fast-paced and brutal nature.

Narrow and treacherous roads, chaotic crosswinds, cursed cobblestones, unbearable bergs, an interminable course: it says something about Belgium, a country where cycling over ghastly road surfaces is a religion, that such a race should in these parts be considered little more than a run-of-the-mill Classic, the Tour of Flanders’ smaller and uglier, western sister. 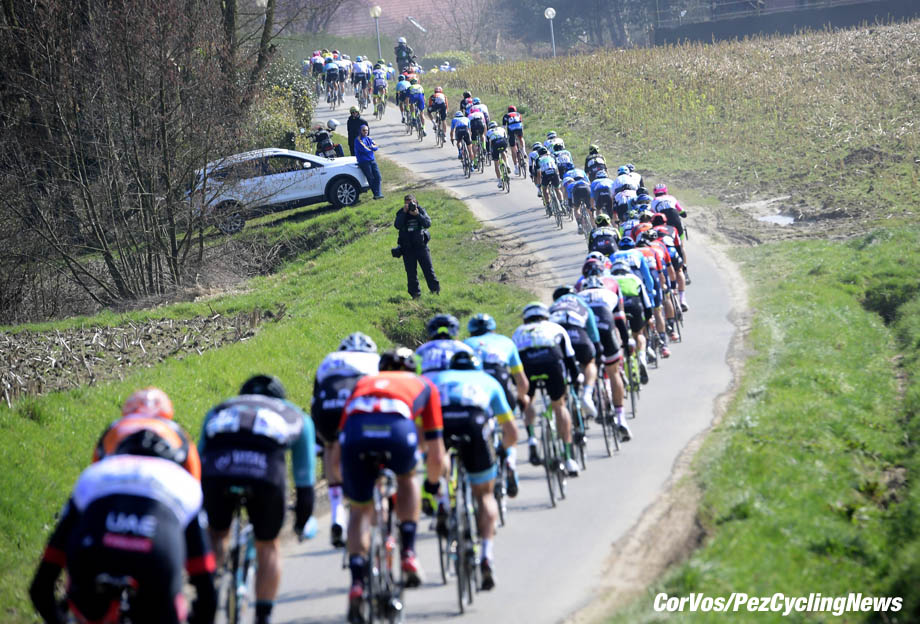 For its 80th edition, however, the organizers had decided to add some pepper to the soup in the form of dirt tracks colloquially known as ‘the Plugstreets’ situated in the Hainaut province, scene of intense fighting during the Great War. Meandering between graveyards and war memorials, these passages promised to inject excitement into the race, like a portion of the Strade Bianche running through the woods of south-western Wallonia.

The Not So Windy Classic
Ahead of the vertrek in Deinze, a red-bricked city on the outskirts of Ghent, all eyes were on the riders of Quick-Step. Having dominated recent events such as the Three Days of De Panne (claimed in style by Olympic champion Elia Viviani) and the E3 Harelbeke (swallowed whole by Terpstra the Terrible), the men in blue seemed to hold the key to ‘the Windy Classic’ and many speculated they might rip the peloton apart in the early going, engineering echelons that would leave most hopefuls out of the equation before the racing had truly started. 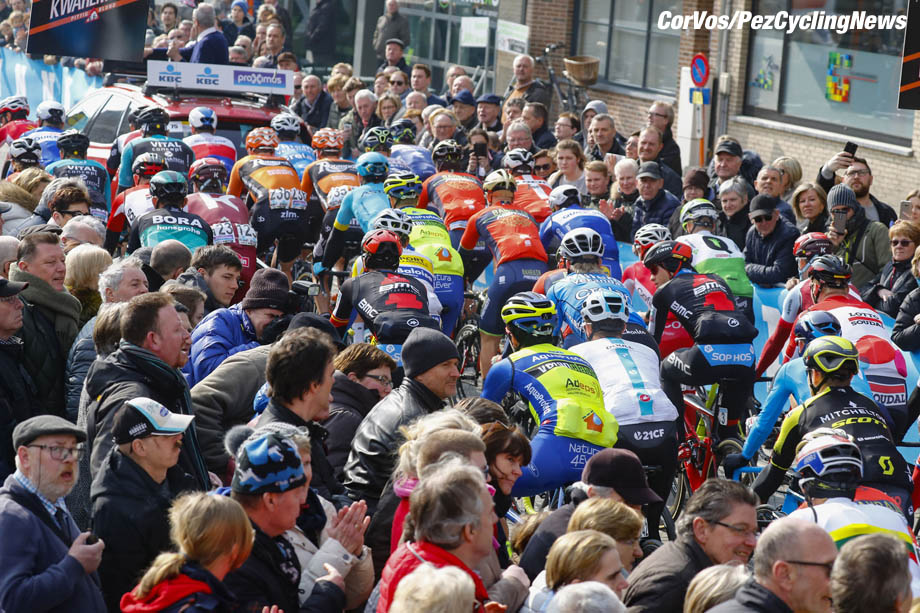 The weather on the day, cold but dry with low winds, did not, however, play into the hands of Patrick Lefevere’s team, and spectators lining the inaugural kilometers of road were treated instead to a pale spectacle devoid of any significant action, as a compact peloton rode west towards the shimmering North Sea. 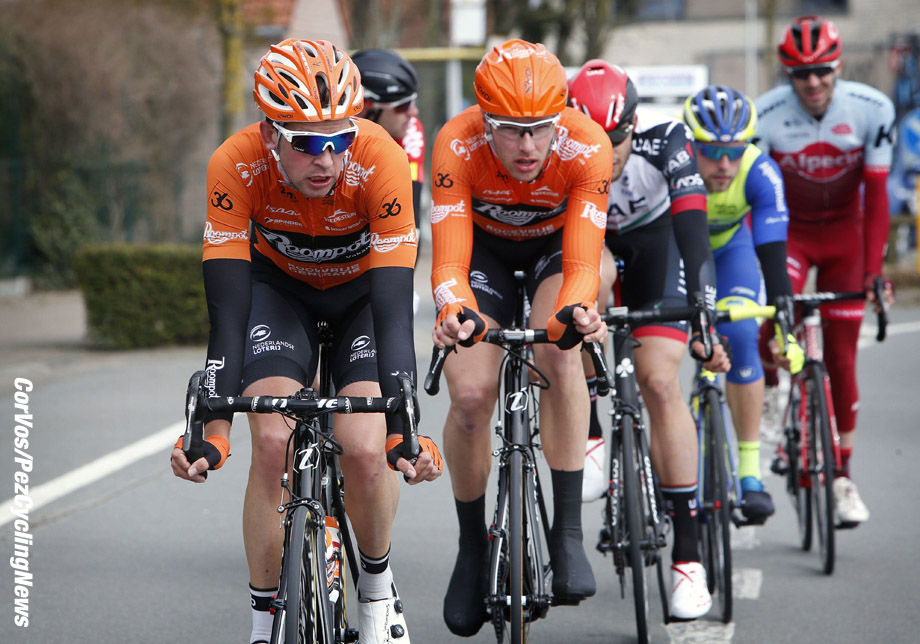 The escapees’ time advantage culminated at just over 10 minutes with 125 kilometers to go, benefiting from the indulgence of a patient pack behind them, as the Quick Step boys, defending champion Greg Van Avermaet and world champ for life Peter Sagan emptied their musettes and chatted about more important and scenic races to come.

When the race’s first hill, the Mont des Cats, came into sight, hostilities could be postponed no further and the Groupama-FDJ formation suddenly took command of proceedings, stringing out the bunch and eating into the six men’s lead in an attempt to pave the way for a sprint finish and the victory of their French national champion, fastman Arnaud Démare. In no time, the gap had been halved and with 100 kilometers remaining it dipped below the 5 minute mark. 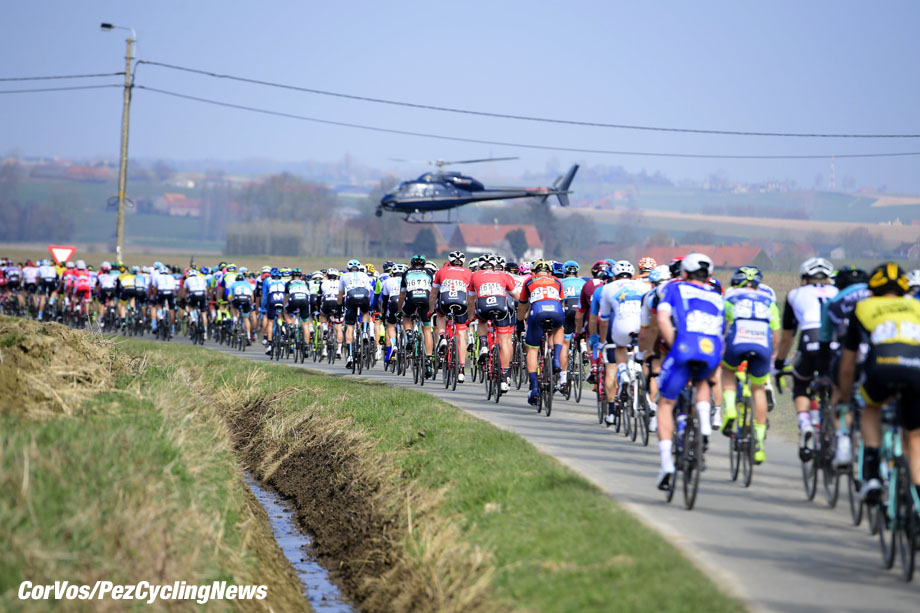 But other than a bad crash suffered by EF-Drapac’s moustachioed Australian Mitchell Docker, there was as yet none of the high drama promised by the race’s promoters. The Mont Kokereel, Vert Mont, Côte du Ravel Put and Côte de la Blanchisserie came and went, causing little impact.

The first of two ascents of the Baneberg, just over 80 kilometers from Wevelgem, proved equally uneventful but in the Kemmelberg, the race’s emblematic cobbled climb, a series of tentative attacks from Belgium’s Philippe Gilbert finally set fire to the powder kegs, stringing out the peloton. 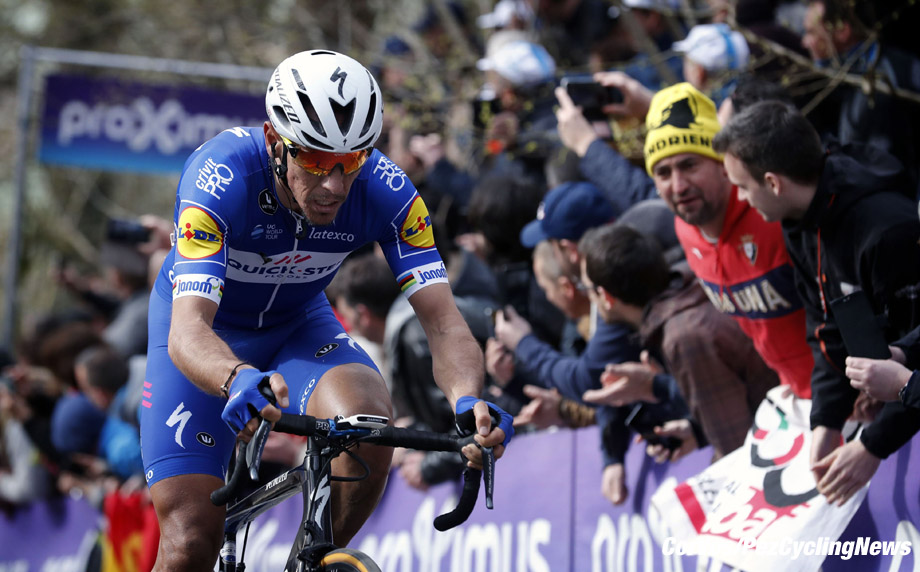 Princes of the Plugstreets
At the approach of the Ypres Salient, Gilbert’s Quick Step team-mate Yves Lampaert shot forward like an arrow, piling more pressure on those in his wheel.

In the tête de course, the members of the break-away sped wearily past the Ploegsteert Memorial and prepared to do battle on the hallowed dirt roads otherwise known as ‘Plugstreets’. As crosses, row on row, appeared to their left and right, they appeared to vie for the spectral applause of trespassed Tommies and past Poilus. 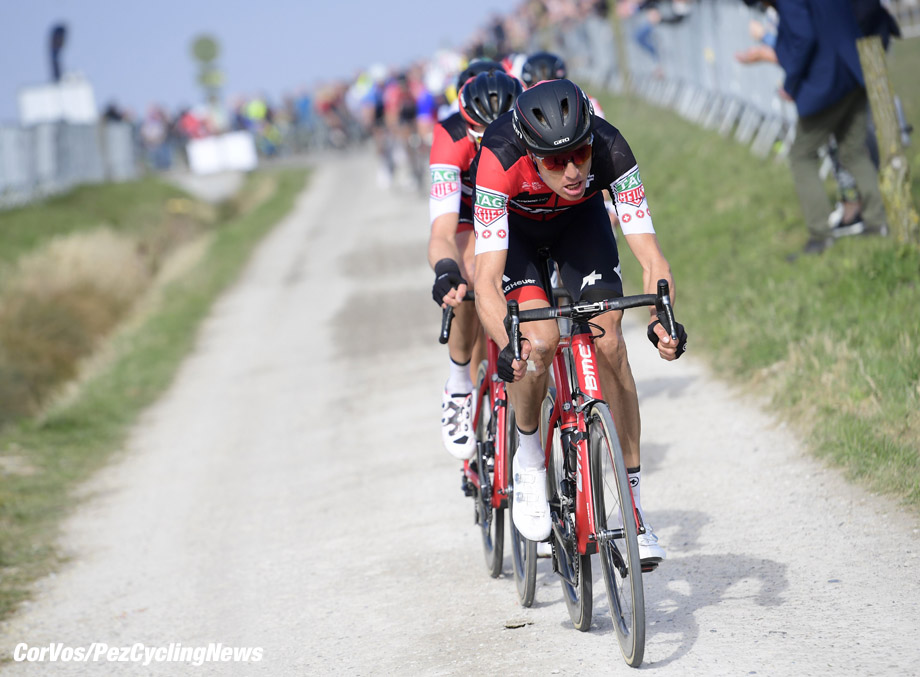 BMC led the bunch through clouds of dust 3 minutes adrift. Van Avermaet’s troops succeeded in sundering the peloton, leaving the likes of Terpstra gasping for air. An elite group emerged and soon found itself breathing down the neck of the front six.

A subsequent series of attacks triggered by Mitchelton-Scott’s Jack Bauer saw Alexander Kristoff and Démare dropped by other favorites such as Van Avermaet, ‘the Golden Lion’, super Slovak Sagan, champion of Belgium Oliver Naesen and Quick-Step’s Czech ace Zdenĕk Štybar, though the latter quite literally bit the dust a few kilometers further down the road and the peloton merged once more. 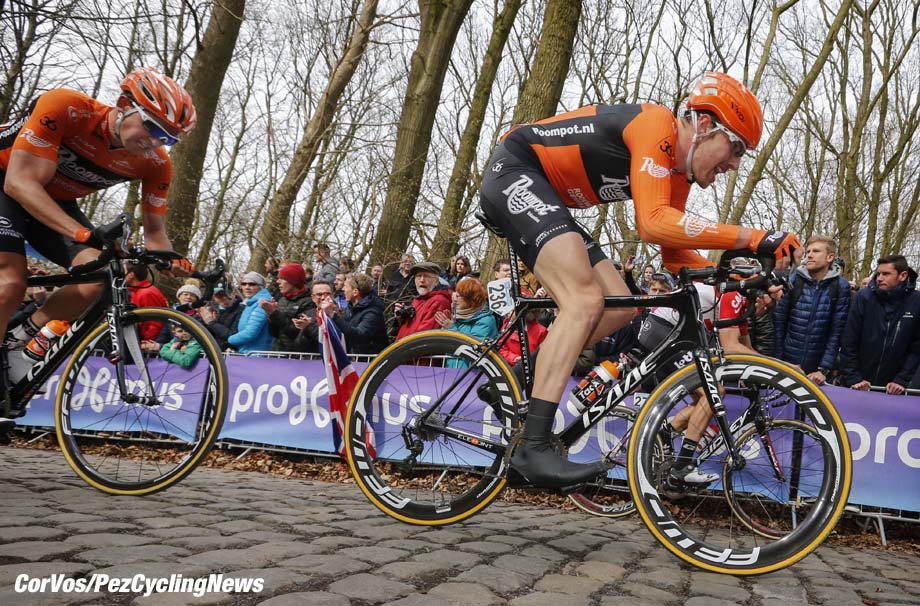 The escapees still led the way over the cobbled slopes of the Kemmelberg, climbed for the second time of the day, followed by a group of around twenty riders including most of the race favorites.

Yet, the flat finale did the leaders no favors and 25 kilometers from the finish, as the race flew through the Menin Gate and into Ypres, a regroupment took place. Meanwhile, a group of the vanquished comprising Kristoff, Italy’s Gianni Moscon and Germany’s John Degenkolb, a former winner of the race, lagged behind, a damning half minute in arrears. 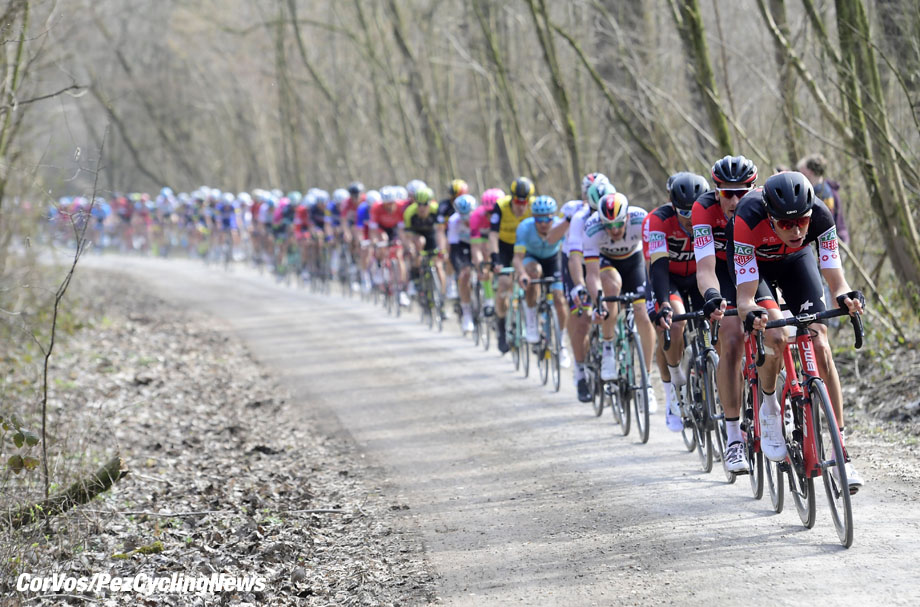 Journeying through depressingly horizontal scenery, the head of the race witnessed further initiatives from the likes of Sep Vanmarke as the sinister city of Wevelgem came into sight. But these efforts proved fruitless and a sprint finish became all but inevitable.

Kristoff shot out of the trailing group, sandwiched between two Astana riders, fellow Scandinavians Magnus Cort Nielsen and Michael Valgren, but the champion of Europe’s desperate enterprise was all in vain. Led by workhorse Gilbert, the first group moved out of reach. 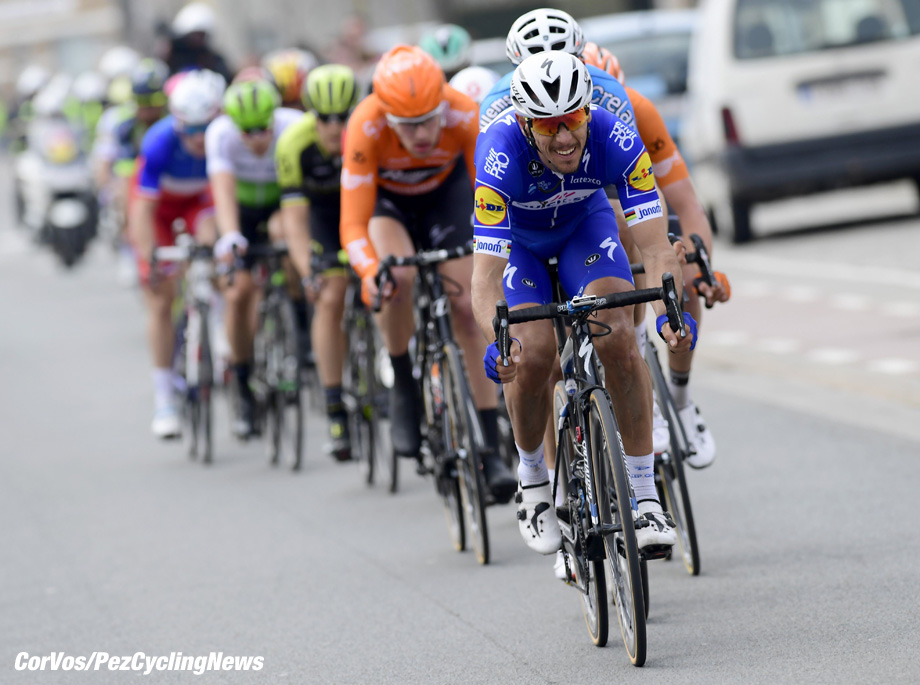 The former champion of Belgium and the world imposed a harsh cadence at the front, discouraging any attacks, as his team-mate Viviani, shielded from the wind, rubbed his hands with glee. Just over a kilometer from the finish line, Van Avermaet went for broke but to no avail, the hero of Rio still far from his best on this evidence.

There followed a sprint to the line and all of Quick-Step’s work went to waste as Viviani found himself boxed in despite the best efforts of his pilot fish. Sagan maneuvered deftly to make his way to the fore, and the man whose portrait is shortly to replace the Slovakian national flag cannonballed to victory. 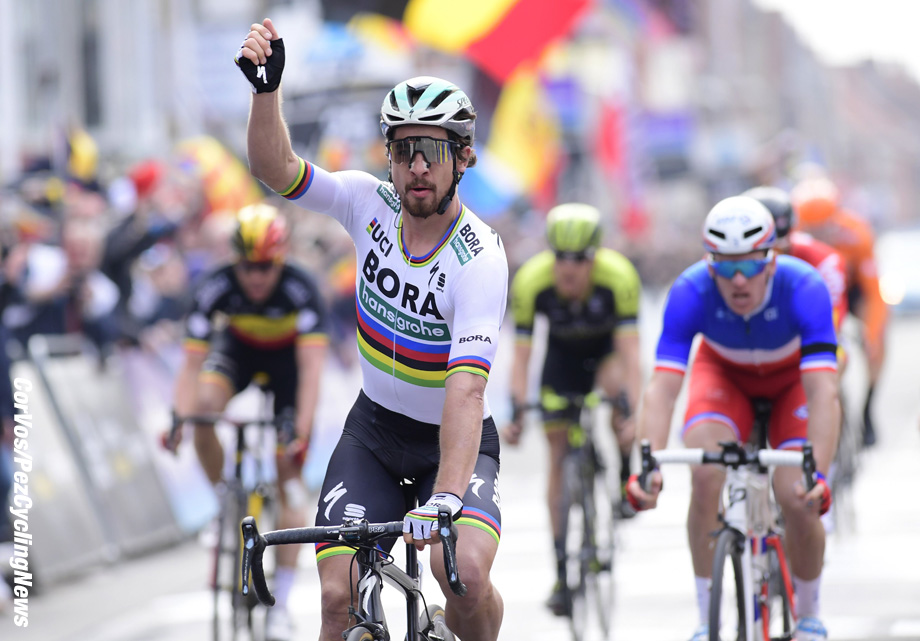 Some spectators moaned about the lack of action but short of donning a zebra-striped kit Sagan could hardly have done more in the circumstances. This will not be remembered as his greatest triumph but the words “mission accomplished” strongly suggested themselves after 250 kilometers of racing. More significant challenges await, beginning with next week’s de Ronde van Vlaanderen, and the World champion will be ready for them.