Race Report: On a freezing cold day in Belgium, Peter Sagan lit up the roads with some very hot riding, consistently in the front groups, forcing the most important split and then soloing away for the victory. What a ride!

In the race across the battlefields of Flanders Fields it was Peter Sagan versus the Rest of the World. And who would have bet against him?

Where The Race Was Won
This was the 75th running of Gent Wevelgem and it came down to a group that formed with 50kms to go that quite simply wreaked havoc on the sprinters’ teams. It contained Eisel (SKY), Haussler (IAM), Flecha (Vacansoleil-DCM) and a number of other riders of quality but nobody who could compete with the class of Peter Sagan (Cannondale).

The sprinters’ teams didn’t know whether to let the break take its course and risk the finish with Sagan or whether to try to bring it back and let Cavendish (OPQS), Greipel (Lotto) and Renshaw (Blanco) fight it out. In the end Sagan decided for them by doing a huge amount of work in the break and then, like Cancellara in previous races, taking off on his own with 4kms to go and soloing to victory. 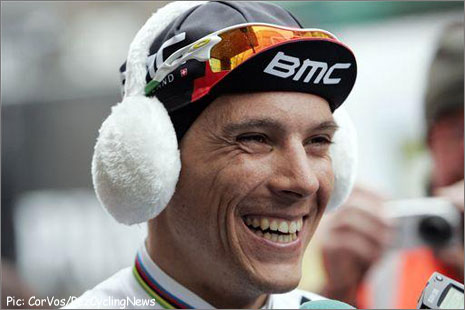 It was so cold at the start that Philippe Gilbert tried out some new headwear. No rainbow stripes though Phil?

How It Played Out
It’s been a cold start to the northern Spring Classics this year and the race start was moved to Gistel to try to combat the cold conditions. However, it was the wind that played its part today with the peloton soon splitting into two large groups.

The real action began with about 90kms to go when Juan Antonio Flecha (Vacansoleil-DCM) took off with two other riders for support. 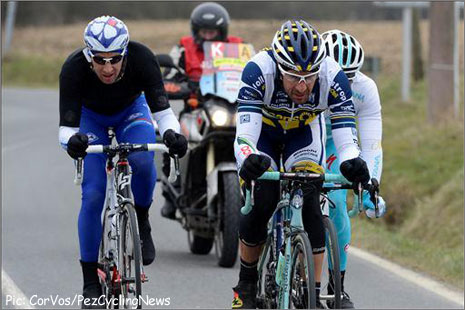 They immediately opened up a 35 second gap on the chase group which contained race favorites Boonen (OPQS), Sagan and Cancellara (Radioshack-Leopard). This gap continued to grow as they hit the first of the bergs but the big news behind was two-fold and would affect the final outcome: Cancellara climbed off at the feed station in order to rest up for the Tour of Flanders but more importantly defending champion ‘Tornado Tom’ hit a kerb with his front wheel and crashed heavily.

He managed to remount after a couple of minutes and struggled alone up the Kemmelberg but his race was over and he decided to retire. He later claimed that the crash had happened because he had been pushed by another rider.

Up front the Flecha break now had a minute and a half over the chasing group but Haussler had attacked on his own which caused a reaction and eventually a group formed up which contained Haussler, Sagan and Bodnar (Cannondale), Eisel (SKY), Van Avermaet (BMC), Popovych (Radioshack Leopard) and Vandenbergh (OPQS). As this group drove on they eventually made contact with the Flecha break at about 55kms to go and gained a healthy lead of 50 seconds over the chasing bunch. This was soon to move out to 1 minute 30 seconds with Peter Sagan doing a majority of the work.

This is where the consternation set in for the sprinters’ teams. Were the men in the break a match for Peter Sagan who was working hard, or should they back off and let the break come back so that Cavendish and Greipel would have a chance? There was a lot of going back to team cars and clutching of radio transmitters as the riders tried to predict what would happen. Cavendish was up at the head of the chase group but he was looking around for support in an attempt to make something of his race. Eventually, with the remaining race distance tumbling, the decision was made for them. The peloton could see the lead group up the road on the long exposed sections but could make little impact on the time gap and by 10kms to go with a gap of over a minute it was obvious that the winner would come from the lead group. The only question now was who that would be.

The break was going all out and had shed Bodnar, his work for the day done, with Popovych hanging on at the back. Haussler was forcing the pace and took Sagan with him but just as they were caught at 4kms to go Sagan jumped away on his own and try as they might they just couldn’t catch him. Eisel, Van Avermaet and Popovych chased hard but could make no impression and Sagan cruised to the line with 28 seconds in hand. 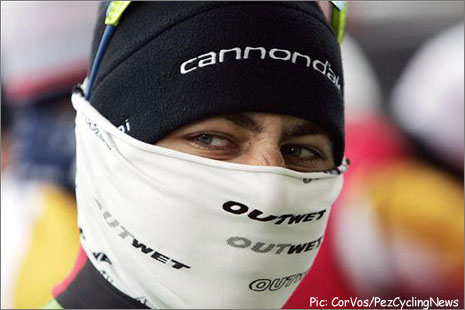 Peter Sagan turned up at the start looking like a bank robber and ended up playing the role perfectly, stealing the win right from under the leading group’s noses.

The others had by this time settled for the fight for second place with Bozic (Astana) taking it over Van Avermaet (BMC). Special mention should be made for Haussler and Flecha for making the initial breaks and working hard all day to ensure their success; fourth and fifth places seem like scant reward for such a hard day’s work. The chasing bunch eventually came home some 39 seconds down on Sagan and was led home by Greipel. 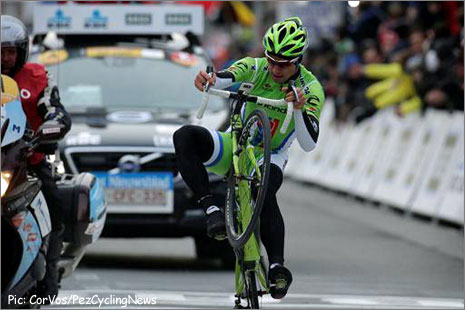 Sagan, of course, by this time had already marked his victory with a series of wheelies which is something we’re getting used to seeing.

As we now move towards the Ronde and Paris Roubaix the big question has to be: how do the other teams take on Sagan? He can finish off a sprint, attack from a group and solo to victory. What a rider. Whatever they choose to do the other big names of Gilbert, Cancellara, Hushovd and Boonen must be getting worried.

Roll on next week.