Gesink outsprinted at the finish line Arthur Vichot (FDJ.fr) and Greg Van Avermaet (BMC Racing Team) after 4h58m of racing the 12.6 urban circuit. Peter Sagan (Cannondale Pro Cycling), one of the favorites entering the race, jumped the sprint very early and ran out of legs on the challenging uphill false flat one kilometre before the finish line. 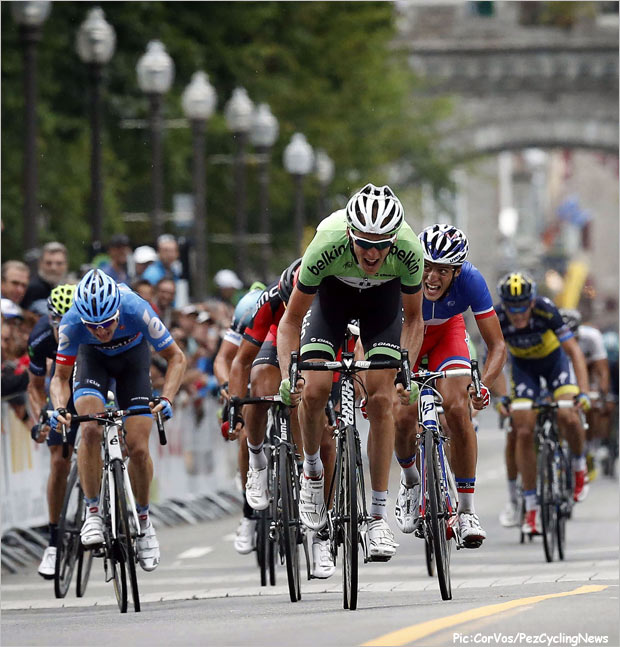 The peloton on 164 cyclists from 21 teams escaped the threatening rain for the day.

Canada’s Ryan Anderson of Vancouver, BC (Canadian National Team) was the top finisher among the Canadian team, finishing in 40th position, just one position after Ryder Hesjedal (Garmin-Sharp) who won the Best Canadian Jersey.

“It think it was a pretty interesting edition today. The early break went, but it didn’t last very long. They started racing pretty hard with six laps to go, and it was really hard for the rest of the day. I didn’t quite have it at the end and we had a great team effort today,” said Anderson, who was the dedicated sprinter for Canada at the finish line.

“Each year it gets better and more pristine. I think it will continue to be a strong event. Each year it gets bigger, and becomes even more important to win. It’s a special event, and I am glad it’s in Canada.”

The riders will now transfer to Montreal tomorrow morning on Via Rail, arriving in Montreal train station at noon. The Grand Prix cycliste de Montréal will be held Sunday.