When is a breakaway not technically a breakaway? How many riders should constitute an escape? Seven, ten … maybe a dozen? But 56!!? Not so much a break of the day as a total peloton fracture on the mammoth trek to L’Aquila, involving a good third of the field. Things just went absolutely loopy and the whole classification has been given a right kick in the pants.

A completely mad day … the favorites let things get way out of hand and the whole general classification has been turned on its head. To say that Evgeni Petrov has taken his biggest career success with the stage win and that Team Saxo Bank’s Richie Porte is now in the pink jersey barely scratches the surface of an explanation!

Another crappy day, wet and cold, slippy roads, so chilly that Vino’s wearing long-fingered gloves and looking uncomfortable … an accumulation of aggressive racing and hard days on the bike, and maybe the leading guys decided not to worry too much when the field split up. Things seemed to fracture pretty early. The road climbed steadily from the start out of Lucera, then a sharp descent. Brent Bookwalter was apparently one of the early initiators, and suddenly the field split and the pattern for the day was set.

When that monster escape went away, the peloton seemed to adopt a Titanic lookout’s attitude to the danger. “Big white icy thing? No problem.” Today’s iceberg, all 112 initially involved kicking and screaming legs of it, seemed to cause the same sort of reaction. “Nearly twenty minutes up the road? Including some potential overall winners? F**k it, it’ll be fine.” 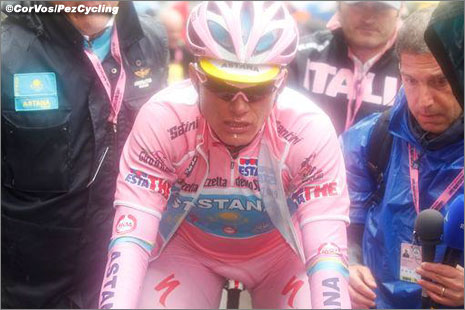 There will be questions and repurcussions no doubt. How did the big capos let this happen? La Gazzetta will be going nuts tomorrow! Missing out is the entire top ten – Vinokourov, Evans, Nibali and Basso, Scarponi, Garzelli, Karpets, Cunego, Pinotti. But Richie Porte had made it into the escape.

Over the first climb of the day – the Rionero Sannitico – the lead had gone up to 17 minutes 50 seconds! Lunacy!

It goes from bad to worse …

With 50kms to go, the ‘favorites’ have got basically their team-mates with them, and no-one else in sight. Still more than forty guys clear, and the remainder of the field waaaay, waaaaaaaay back.

Suddenly, we have guys like Tondo (Cervelo) and Richie Porte (Team Saxo Bank) looking at the maglia rosa. Wiggins and Sastre are catapulting themselves back into contention.

It’s Team Sky (Barry, Cummings, Possoni – for Wiggins), Cervelo Test Team (Gustov, Wyss and Tondo – for Sastre) and practically the entire Caisse d’ Epargne team (for their Grand Tour hope David Arroyo) ploughing along at the front of the group.

When the peloton finally woke up to the seriousness of the situation, it was Astana (for maglia rosa incumbent Vinokourov) and Androni-Giocatolli (for Scarponi) pulling their guys out of the ‘escape’ to reinforce the chase. Liquigas were there, too, all bundled up in their navy blue raincoats like errant schoolboys on an outing.

Over the Capo di Valle, the second of two classified climbs on the day, and it’s Jan Bakelandts (Omega Pharma-Lotto) who takes the points. By the time the shattered favorites are summiting, the gap is 12′ 54″, and it’s still 46 guys in the lead bunch. 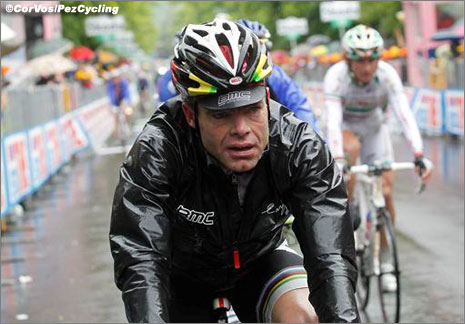 Arnold Jeanesson and Andrey Amador are absolutely battering themselves into the tarmac for the Arroyo; Michael Barry, Steve Cummings and Morris Possoni are doing a thunderous job for Wiggins. It’s Vinokourov himself working on the front of the chasing peloton trying to limit the damage! But it’s practically a full 10kms between the two big groups. No sooner have the TV pictures shown us Vino and co at 40kms to go, it’s Cummings towing the day’s escapees under 30kms to go.

The favorites are on their own, basically. Their domestiques are all shattered so it’s up to Vino, Basso, Evans and Nibali to get their ar$es into gear. But it’s too late by the look of it; they splish-splash under 35kms to go and the gap is up a smidgin, to 12’56”!

The lead group are flying on a descent now, inside 20kms to go, the Caisse d’Epargne boys hunched aero over their bars. The speed is super-high as they hurtle past evidence of the devastating earthquake that struck the Abruzzo region last April. 308 people died and L’Aquila was hit hardest, right at the epicenter.

With the lead group at 14 kms to go, their lead is down, but only a little. It’s 12’23”, and we’re seeing an insane turnaround of Pereiro-esque proportions! 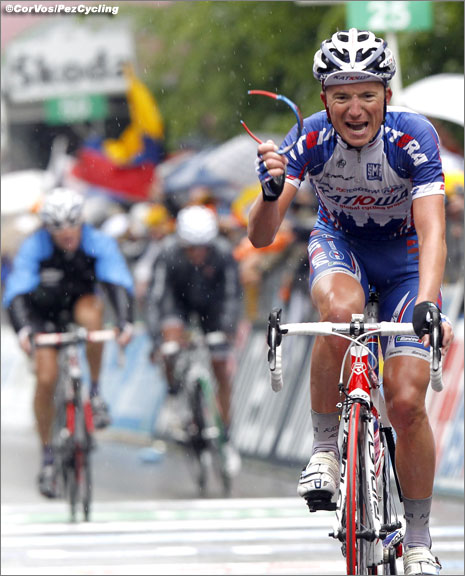 David Millar is at the front of the leading group with eight clicks to go, then an attack from stage five winner Jerome Pineau. Among the shattered favorites, Vino is just shaking his head and Cunego is chattering with Garzelli – “What the feck just happened here?”

The front guys go under 7kms to go, just as the ‘favorites’ go through 15kms left – absolutely insane. Voeckler tows a half-dozen up to Pineau. Sastre is right at the front now, clawing for every second. Cataldo is next to attack, and Cervelo line it out. One long snake of sodden riders slithering uphill and under the 5kms to go banner.

3kms to go: Cataldo, Baekelandts and Gerdemann slosh downhill through pools of water. There’s a nasty hairpin with 2kms left, and they come to a standstill to take it … Gerdemann makes it round, but Baekelandts hits the deck. Ouch!

It’s a nasty, nasty pitch from the red kite up to the finish line, an awful kick in the teeth after 261kms of soaked racing. Gerdemann is giving it all, but Team Katusha’s Evgeni Petrov zooms past. The chase is on … Petrov is looking over his shoulder anxiously, but he makes it, disbelievingly. Cataldo gets second and Sastre and Wiggins finish three, four. 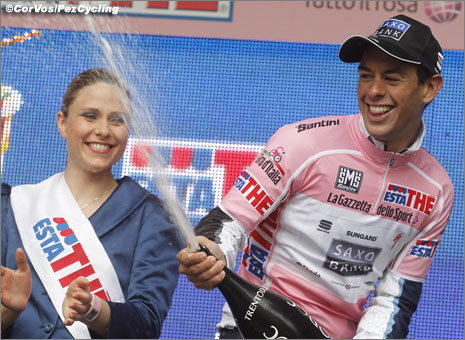 It’s Richie Porte in the maglia rosa! David Arroyo now second and Robert Kiserlovski third! One of the most extraordinary days in recent Grand Tour history … only in the Giro d’Italia!

Keep it Pez for Ed and Martin’s take on the mayhem from the roadside.