It’s enough for most pros to ‘make it’, get into a pro team, then get that defining ‘second contract’. Most guys don’t win a race, suffer like dogs, get used up by ‘the system’ … but maybe that’ll change now. Even fewer get to win a Grand Tour stage, and a microscopic percentage of racers win in the Giro, Tour or Vuelta in their home town. The dream came true for one of those chosen few today.

Congratulations, Manuel Belleti, winning in his own backyard. And the young man couldn’t stop the tears of joy from tumbling down his cheeks. On the day that Colnago CSF-Inox’s little ‘big’ man, Domenico Pozzovivo, climbed off and out of the Giro, his team-mate comes up with a race saver. No doubt Angelo Zomegnan, chief of the Giro, will be very happy that the wildcard picks have justified their inclusion. 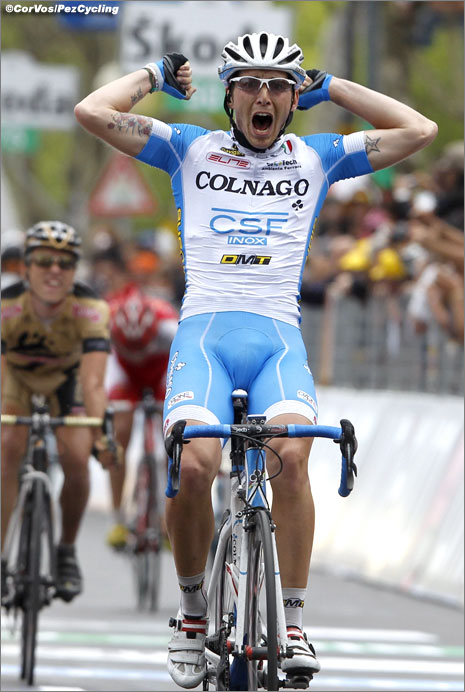 Belleti was the fastest finisher of a seventeen-man breakaway, and one of seven who overhauled a brave assault into the last kilometer deathzone by HTC-Columbia’s Craig Lewis. Leading within sniffing distance of the line, the American was clawed back and came in eighth. Team Sky’s Greg Henderson got second and Iban Mayoz snared third for Footon-Servetto.

Belleti grew up just a couple of miles outside Cesenatico, Marco ‘Il Pirata’ Pantani’s home, and must have thought it was Christmas knowing the roads so well. 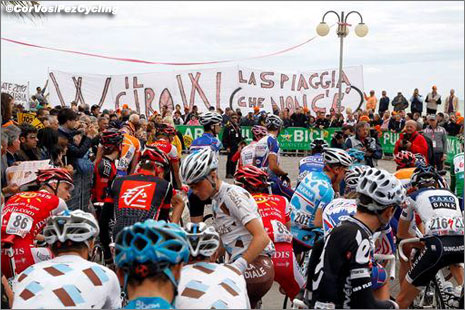 The seventeen got away after a flurry of abortive attacks, just beyond quarter distance, and effected a well-disciplined effort all the way to the line. There were a few lumps and bumps early on in the stage as the route flew along the coastline, then skirted the principality of San Marino. Next up, a couple of categorised climbs for the maglia verde climbers’ competition in the last quarter, followed by a swift downhill the last 35kms or so to the seaside. Ideal breakaway territory given that the mountains proper loom into horrifying view with the Monte Grappa to shake things up tomorrow. 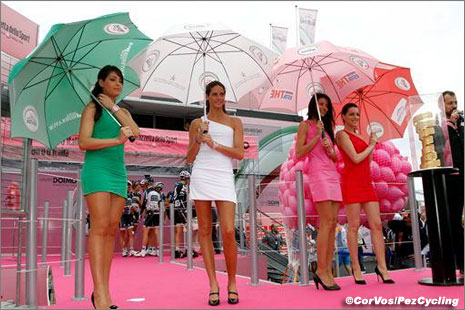 These podium girls had nothing to do with the race today, but hey, just go with it. 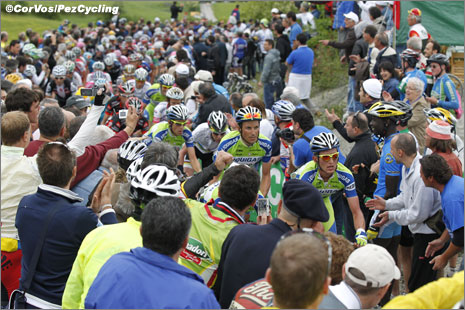 The second of the day’s categorised climbs started to shake the break up, though, and people lost contact, regrouped, fell away again. It was constant divorce and make-up, the way Liz Taylor and Richard Burton used to manage.

Kalle Kriit, Facci, Stamsnijder and Mayoz got away almost decisively, Cam Meyer got to them and it went frenzied before Craig Lewis looked to have it nailed in the last 1.5kms but he ran out of steam as the chasers timed it right and Belleti took the win which will make him every Italian mama’s favorite ‘other’ son. 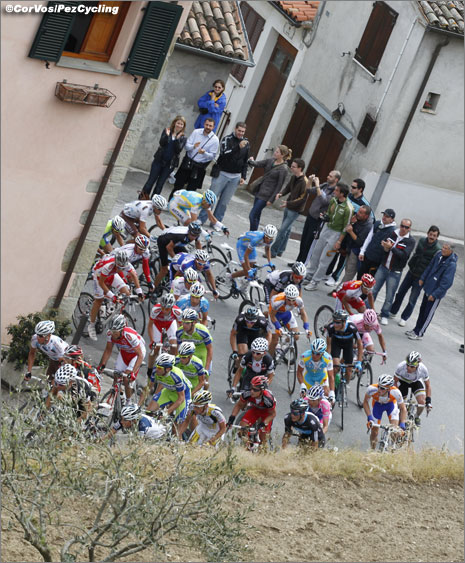 The favorites didn’t really c0ck anything up today, with no major danger men in the break. Of note, though, was an intriguing move by Vladimir Karpets. The Russian went solo on the Perticara climb and rode solidly which gained him two-and-a-half minutes on the GC contenders and slots him into fourteenth overall … the hairy, gristly filling in a Vinokourov/Evans sandwich. Quite why his two team-mates didn’t/weren’t asked to wait up for him as soon as they knew he was coming over, though ….

So, Richie Porte hangs onto the maglia rosa, maybe for the last time in this year’s Giro, although who knows what he might be able to do on the Monte Grappa tomorrow.

Keep it Pez to find out, as battle gets set to rage once more!

Giro di PEZ: The Quiet Land (Between The Storms)