A few weeks ago, a broken collarbone. Today, a breakthrough win in a Grand Tour. Not a bad way to recover from a big crash! Team Saxo Bank, rumoured to have a new sponsor in the bag, might just have sealed the deal after Chris Anker Sorensen’s solo special on the Monte Terminillo. The favorites watched each other. Just as well, it was hard to see anything through the mist!

Chris Anker Sorensen might just have been Team Saxo Bank’s go-to guy for this Giro’s overall before an unfortunate wreck saw him on the turbo trainer for a month, recuperating from a broken collarbone. Disavowing the GC, he went looking for stage wins and netted his biggest career triumph to date on the Monte Terminillo. A fantastic win for the young talent we spoke to an eternity ago in Amsterdam.

He was the foremost survivor of an mid-stage break, navigating through the fog to come out with the win ahead of gutsy Simone Stortoni and Xavier Tondo. The favorites decided not to light things up too much, huddling together all the way to the top. Here’s how it all happened …

After yesterday’s mayhem, which left some riders unidentifiable and ruined the GC hopes of others, it was an understandably restrained start to the day. No early attacks as the subdued survivors came to terms with the damage of the stage seven mud-fest. 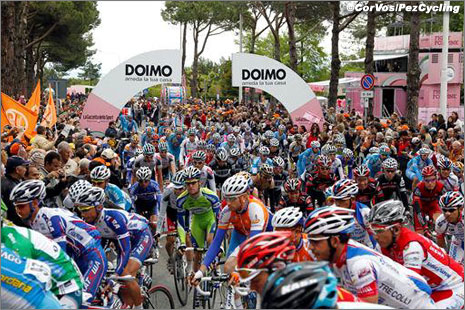 So we had grey skies, cloying brown mud and black moods on the supposedly white roads, the ‘Strade Bianche’, yesterday. There was more white stuff on the summit of the Terminillo overnight. Yep, snow, but the organisers were happy with how things looked ahead of the day so it was ‘race as planned’. Gilberto Simoni and Stefano Garzelli know all about this climb. The former laid a foundation for his Giro win in 2003 last time up here, when Garzelli jumped him in the final metres of the climb to win the stage. 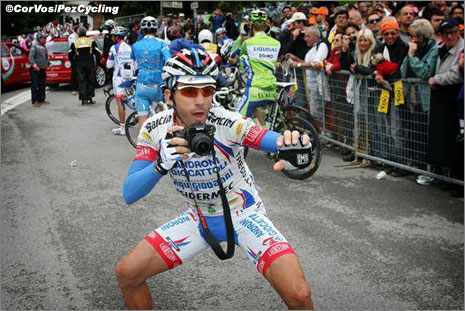 Matty Lloyd (Omega Pharma-Lotto) extended his lead in the mountains competition by taking the points atop the Monte Nibbio – this precipitated a bit of a shake-down in the race, with attacks starting. Sky’s Steve Cummings and Steve Kruiswijk of Rabobank were in breakaway action, which prompted a big group to go clear and caused a split in the peloton.

Tyler Farrar of Garmin-Transitions was one of the guys caught in the second group, losing minutes early on. Lampre were in charge of the first favorite-heavy peloton as the race motored towards the Marmore, the second GPM climb of the day, where Androni’s Jackson Rodriguez took the points.

The Terminillo isn’t a monster climb, but after the first week of rain and crashes in Holland, a long transfer to northern Italy, and two super tough days of racing – or survival, like yesterday – it is a climb that will hurt! Anyone on an off-day is going to be found out. 16kms long, and climbing 1200 metres to top out at 1668m, the maximum gradient touches an agonising 12%.

Before we hit the beast, riders are starting to drop out of the race. Ale-Jet Petacchi is first to go, followed by BMC’s John Murphy and Milram’s Fabian Wegmann. At 30kms to go for the peloton and they are a full three kilometres of road behind the breakaways. 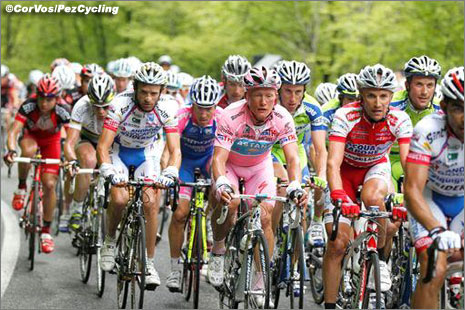 The lead group starts to eat itself. Voeckler’s been giving it everything for team-mate Johann Schopp, but it’s Colnago CSF-Inox’s Simone Stortoni who goes clear inside 10kms to go. Chris Anker Sorensen chases up to him. Peloton still with all the bigger names together at this point. Seven clicks left on the clock and Sorensen/Stortoni have 1’50” on the maglia rosa group – it’s going to be tough to hang on. 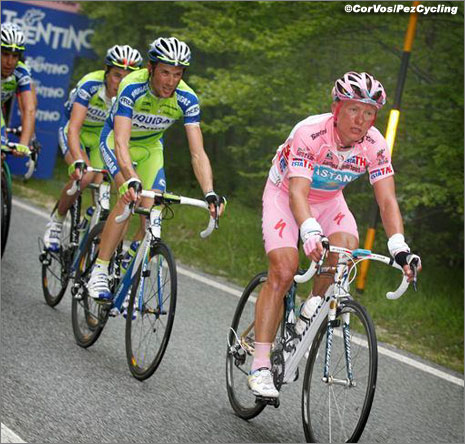 Five kilometres to go – Sorensen is solo and hurting big-time; the gap is down to a snip over a minute and a half. Androni-Giocatolli are winding up the speed in the peloton. The top guys are all in there – even Wiggins, climbing fluently. 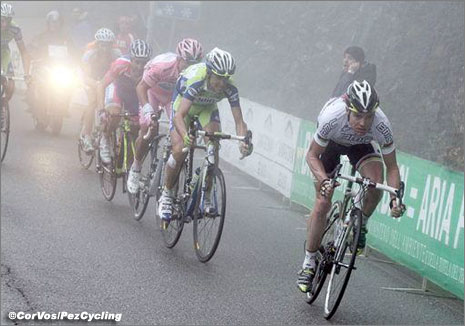 Sastre’s struggling again, and is dropped by the leaders – their group is disintegrating rapidly. It’s down to about fifteen now. Sorensen is in total agony trying to grind the pedals round, but he’s staying clear. 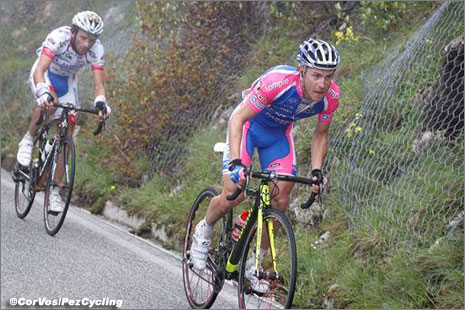 Xavier Tondo (Cervelo) attacks the lead group … there’s pained reaction from Androni-Giocatolli. 1.5kms left, and they’re leaning out of the sun-roof of the Saxo Bank car, screaming (and I mean SCREAMING!) encouragement at Sorensen. The young Dane looks like he couldn’t care about tomorrow … he’s leaving everything on the Terminillo! 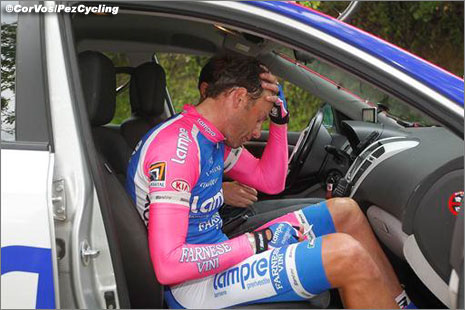 Ale Jet had to withdraw due to bronchitis.

He makes it, looming out of the fog, arms in the air. A great win. Stortoni has survived in between for second, then come Tondo, Petrov and Gadret …

… the main favorites all come in together, so there’s no long-term consequences for the overall. 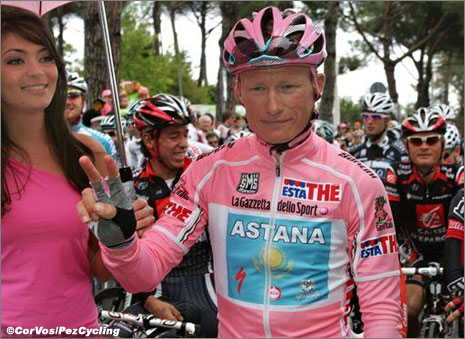 A fine finish to the stage, making things even more intriguing as we head into the second week of this Giro. Loads more to come from Ed and Martin on the roadside – expect some very misty pictures! Keep it Pez!

Giro di PEZ: A Day We’ll Talk About For Years