American Tyler Farrar has won the opening road stage of the 101st Giro d’Italia, having to fight back from his own crash and then avoid the carnage of the last 20km. It was an action packed opening for the Italian Grand Tour and as well as some changes in the leaders’ jerseys there will be more than a few riders having to tend to road rash tonight.

Stage 2: Amsterdam-Utrecht
After yesterday’s rain soaked opener, (which say Team Sky take the first stage win and first leader’s jersey of their first ever Grand Tour), the prospect of 210km of similar weather, dodging the road furniture of the Netherlands, probably wasn’t high on the list of “best way to spend your day” for the mountain climbing GC men. But, with the Mondialisation of cycling, it’s no longer good enough to be a climbing time trialer or a mountain goat who can hold your own against the clock. These days you also need to have a good “Classics Style” to make sure your three week aspirations aren’t done and dusted before the race even reaches home soil. 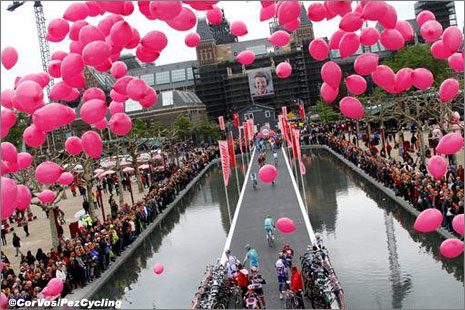 Today’s second stage of the 101st Giro d’Italia took the riders from the famous cultural centre of Amsterdam to one of the country’s oldest cities in Utrecht. As the crow flies, it would probably be just enough for a decent time trial stage, but by taking the long way around, the organisers have found enough space for 2 mountain climbs (strap on your oxygen bottles boys, they are at 49 and 70 metres above sea level respectively) before the pancake flat but rather twisty last 80km.

With today (like tomorrow’s stage) looking certain to be a day for the sprinters, there will be plenty on the lookout for an escape to try and out-wit the likes of Greipel (HTC Columbia), Petacchi (Lampre Farnese Vini), Farrar (Garmin Transitions), McEwen (Katusha) and Henderson (Team Sky). After yesterday’s TT opener, Team Sky’s GC man Bradley Wiggins can hold onto his Maglia Rosa (which he described yesterday as one of the iconic symbols of cycle sport) if the race comes down to a sprint finish and Greipel and his own team mate Henderson don’t take the maximum bonus seconds on offer.

HTC Columbia’s DS Valerio Piva told La Gazzetta before today’s lunchtime start that Greipel had overcome his intestinal problems and the team will be playing all of their cards for the sprint. (If you haven’t checked it out, have a read of Gord’s interview with Adam Hansen yesterday for an ‘inside the team’ perspective on the Greipel-Cavendish rivalry).

Vertrek/Partenza
The 198 strong peloton – bookended by Cadel Evans wearing number 1 on his World Champion’s jersey and Aussie Richie Porte wearing the highest number, 219, pinned to his white jersey as leader of the Best Young Rider Category – rolled away from the official start at Km 0 at 12.28pm. With the sprinters settling in for a sure fire chance to have a go at today’s finish, there was always going to be a group go on the attack who wanted to make the fast men (and their teams) earn their pay today.

Four riders headed up the road almost as soon as they flag was dropped and with Bradley Wiggins’ Team Sky taking up their position at the head of the peloton, they allowed the gap to the break to draw out to a comfortable, yet closable, 5minutes. 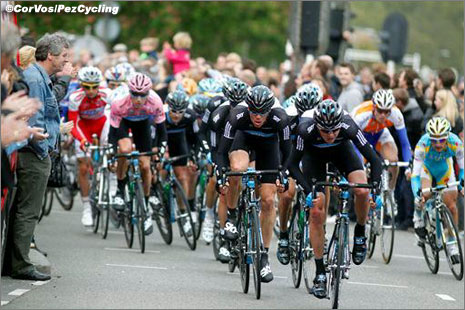 The four in front were Paul Voss of Milram, Stefano Pirazzi of Colnago-CSF Inox, Mauro Facci of Quickstep and Dutchman Rick Flens of Rabobank.

Into The Mountains
The first of the two GPM sprints for the day came after 88.7km at the top of the Kaapse Bossen, a 2000m drag with an average grade of 1.4%, with Pirazzi taking the points ahead of Flens and Voss.

Following a ‘break’ for lunch, at Leersum, it was onto the second climb to decide who would be relieving Wiggins of the mountain competition leader’s jersey. Whichever rider claimed the prize today, will have the honour of keeping it until at least the end of Thursday’s stage from Novara to Novi Ligure, when the race heads back to Italy. 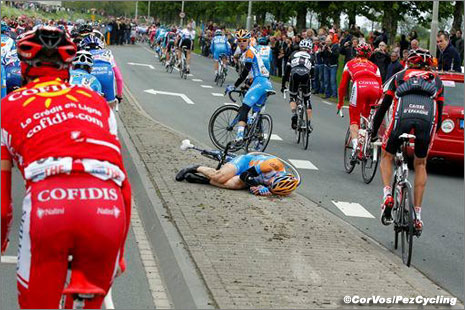 Speaking of a return to Italy, with news that airspace closures are again a possibility thanks to the return of the volcanic ash cloud, there was much discussion in the start village over exactly how the teams and riders (and race staff) would be getting back to Italy. The original plan from the organisers was for the riders and key personnel to take one of two special charter flights from Oostende in Belgium, straight after the finish of tomorrow’s stage to Middelburg. The alternative might look like being a long bus transfer with La Gazzetta reporting that race organisers RCS have eight buses – enough for 350 people – to ensure the race is ready to start again on Wednesday, with all riders present in Savigliano for the TTT. 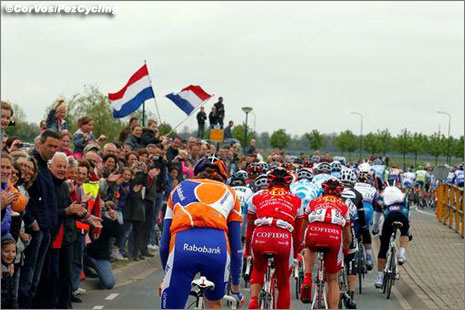 The second climb, at 100.5km covered, was the Amenogse Bos. The 2400m climb had an average gradient of 2.2% and Voss was first over the top ahead of Flens and then Pirazzi. Far from securing a jersey on the line, the three were all equal on points with Pirazzi and Flens both securing one ‘win’ apiece.

With the four at the front sharing the work equally now that the two GPM’s were done and dusted, and Team Sky keeping things in check back in the bunch, it was up to Anders Lund to break up the day for us a little with a trip to the asphalt. An uncomfortable sovenir of his time in The Netherlands the SaxoBank rider crashed at the back of the field at around 93km left to race. A quick bike change and then an exceedingly long (and fast!!) hand-over of a new drink bottle saw him back in the peloton without too much trouble.

All Fall Down
And so it starts… Just as Paul Voss was making his move to pick up the TV sprint at the head of the race, it was chaos in the peloton as the continual narrowing and widening of the road saw some big pileups. 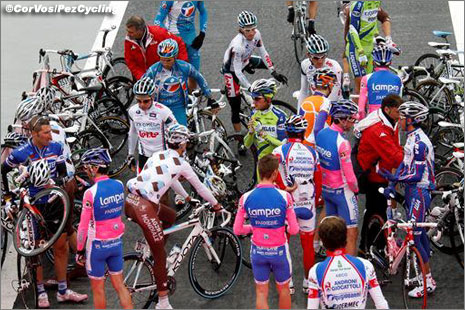 It wasn’t immediately clear who had come off worst from the first crash, but when the cameras showed one of today’s favourites, Tyler Farrar lying in the middle of a traffic island it didn’t look good for team Garmin Transitions. Farrar was up without too much obvious damage and then it was him and two team mates starting a long chase back to the peloton, but seemingly his chance of stage victory gone. Time would tell if he made it back to the peloton.

Another two falls inside the last 50km slowed the progress of the peloton and while Farrar and co were chasing to get back to the bunch, Maglia Rosa wearer Brad Wiggins was picking himself up off the deck along with several other members of his Team Sky squad. Again, nothing too serious for the race leader, but an unwelcome distraction for his day in the pink jersey.

Up front, it was down to three with 35km left to race after Facci (Quickstep) was dropped around the time the peloton started falling off. With the gap down to just over a minute between the break and the peloton and the Team Sky riders (and Wiggins) back at the head of the train, the manoeuvring was starting amongst the three at the front. 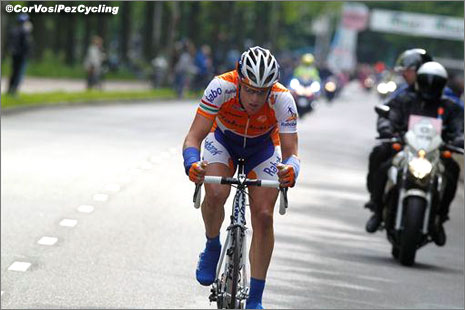 The catch was looking imminent, so Milram’s Voss decided to make them work for it and headed off alone while Pirazzi and Flens sat and watched him go. Rabobank’s Flens decided that conceding so soon was not a possibility on the Dutch team’s home ground, so he countered the move and was soon solo alone. It has been 11 years since a Dutch rider has won a stage in the Giro, but with Team Sky driving the race hard, Flens’ 12 second lead was not going to last long.

A good show on home soil for Flens. 23Km from the finish and the peloton was all back together.

Every time the road widened there were several teams showing themselves at the front of the race. Astana, SaxoBank, HTC Columbia, Rabobank and Liquigas were all there in numbers, but as soon as the roads narrowed, it was Team Sky back in the lead.

The Last Crazy Kilometres
At the back of the peloton, there was steady stream of riders losing contact thanks to the combination of the pace, the corners and the after effects of their crashes. Modolo was in amongst them as well as Bono and two team mates from Lampre and John Murphy from BMC. Lampre Team Leader Damiano Cunego was continuing his shocker start to the Giro, fighting back between the cars as the disorganised looking peloton hit 7km… seconds before the peloton hit the ground in a huge pile-up.

Italian Champ Pozzatto was being very slow to get up, but did eventually climb back on the bike and get a push back into the race from Andrei Tchmil.

Liquigas took over the pace at the head of the race with Ivan Basso himself up the front as the peloton split into several groups with Wiggins in the second group with only 5km to go.

Yet more crashes in the chase with a pair of Lampre riders (one Spezialetti the other Bono who will have road rash on his road rash) and Maciej Bodnar of Liquigas hitting the grass as they battled back through the cars.

A select group with Cervйlo and Liquigas, seeming to have the most numbers, was showing no signs of slowing down in the run it. Around 35men would be making the run at the finish with Wiggins and his Sky Team mates back in the second group. 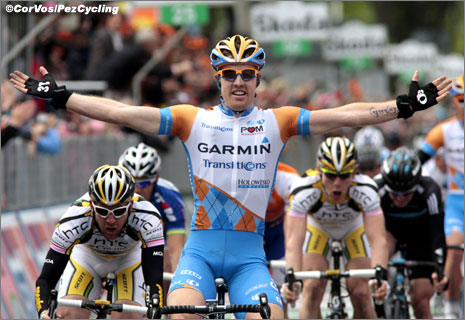 Farrar Fixes It
Vinokourov tried his hand at a break but didn’t get far and then Omega Pharma tried their had at the front of the group.

Into the final kilometre it was the orange jerseys not of Rabobank, but Garmin Transitions who were in the right position. Farrar had fought his way back from his crash and had two team mates ahead of him ready to launch him to the line.

Team Sky’s CJ Sutton decided not to wait and put in a move that gapped the field but by the time he slowed to make the final right hand bend for the run to the finish, there were two Garmin riders on his wheel.

HTC-Columbia’s Matt Goss made his move around the outside but had to step out into the wind to make his move. 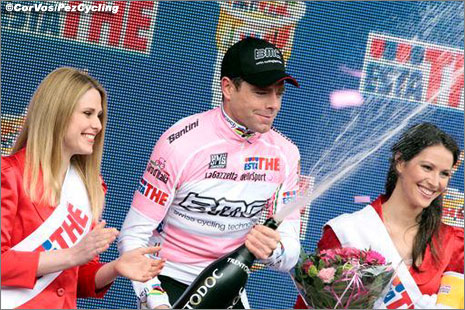 Tyler Farrar had enough time to wait for Sutton to die on his left and with Goss out on his own for much longer, Farrar stepped off the wheel accelerated to the line ahead of the Australian. Liquigas’ Fabio Sabatini was third and then the next big question was: What the heck had happened to the GC?

World Champ Cadel Evans was also in the front group with Greipel and so he took over the Maglia Rosa from Wiggins.