Race Report: After three rough days in the Netherlands followed by a trip down to Italy that can be counted as a half stage, the riders enjoyed a well-deserved rest day on Tuesday. They’re back at it today with one of the most beautiful and difficult disciplines within the sport of cycling: the team time trial.

In what has to be seen as a big surprise, Liquigas-Doimo, the team of Vincenzo Nibali and Ivan Basso, staged a huge coup to take the win in Cuneo in today’s 33 km team time trial over the highly-vaunted TTT powerhouse squad, Team Sky. Liquigas’ performance was all the more surprising considering they were half a minute down on Team Sky with 16k to go. They not only made up the deficit but came good on an extra 13! 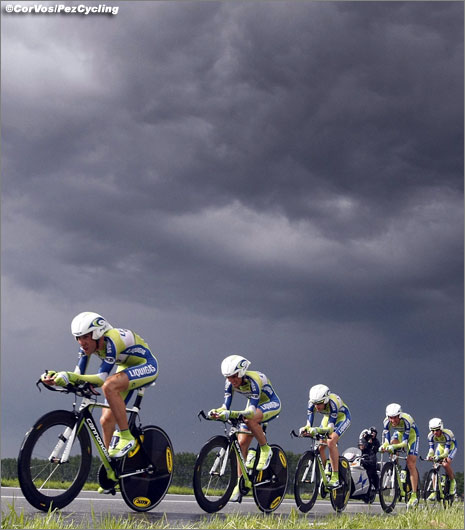 Courtesy the huge effort by his Liquigas team, Vincenzo Nibali is now the overall leader of the Giro d’Italia. In fact, Liquigas now occupy the top three spots on the overall classification with Ivan Basso in second, 13 seconds behind Nibali, and Valerio Agnoli in third, 20 seconds back. HTC-Columbia occupies the next two spots on GC with Andre Greipel and Matt Goss, both 26 seconds back. If Greipel and/or Goss play their cards right, they could still see a day in the Maglia Rosa before the race turns uphill in a big way on Stage 8’s mountaintop finish to the Terminillo. 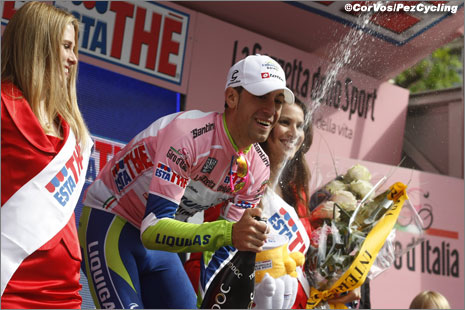 Nibali was a very late addition to his Liquigas-Doimo team. He was slated to race the Tour of California until Franco Pellizotti came up shifty under the watchful eye of the UCI Biological Passport. Pellizotti was out, a call was made to Nibali and suddenly he was racing his home tour. This is hardly a situation like that of Alberto Contador a few years back though – Nibali had just returned from a high altitude training camp, which was followed by the Tour de Romandie. There’s no question that Nibali is in good form right now – the same goes for his teammate, Ivan Basso.

Evans Loses More Time
Cadel Evans’ BMC Team put in a solid effort to take the early lead in the contre-la-montre. Unfortunately, their lead would not stand the test of the latter half of the field, and by day’s end, Evans had lost another 79 seconds on the general classification. The only other current contender (I’m not counting Cunego, et al) to come out worse on GC from today’s team time trial was Acqua e Sapone’s Stefano Garzelli. Garzelli had been in fine overall position, only 15 seconds off of Vinokourov’s lead, but then lost a gigantic 2:30 today. 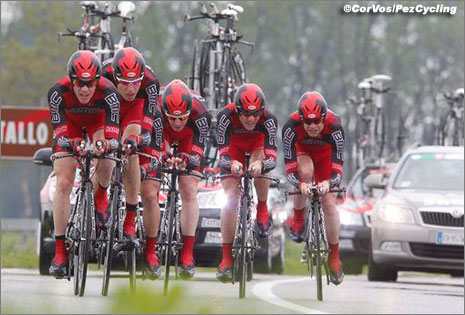 BMC did have some unfortunate luck to deal with today: the weather. The weather was mixed throughout the whole day, but the weather for the early teams was markedly worse. BMC had to contend with lots of rain, and according to Cadel, a crosswind that later changed to a tailwind for the final teams: “TTT done, going early did not catch the good weather. Mad crosswinds for us turned tailwind for last teams. Very happy with the (BMC) boys!”

A Look At The Other Contenders: Sastre
Carlos Sastre has to be pleased with only losing a scant 36 seconds in today’s team time trial. Still, unless he puts on a magical display in the mountains, the two minute gap between Sastre and Nibali is fairly significant. People are fond of discussing how insignificant time gaps are at the beginning of a Grand Tour, but if one rider gets a two minute head start and rides just about as well as the rider who started two minutes back – well, there’s a problem for the rider two minutes back. If there’s anyone that can make up some big time differences in the mountains, it’s Sastre, but I’m sure he’d prefer to be inside a minute of riders of the class of Nibali, Basso, and Vinokourov. 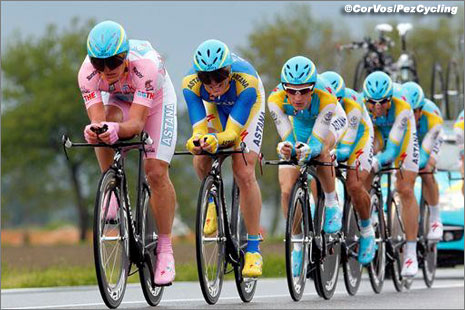 Vino: The Drama Queen
The prize for drama has to go to Astana today. The team put together a solid ride for the first 32 km, but heading into the ultimo chilometro, Astana lost their sixth guy, and then moments later, their fifth: Slovenian Gorazd Stangelj. Vinokourov, clad in his Maglia Rosa skinsuit, was on the front driving the pace, and was none too pleased to have to sit up in the final kilometer to wait for Stangelj. He waved his arm at him, shook his head…and didn’t wait. The team was in tatters as Vino kept riding for a moment, another rider kinda sorta waited, and the others had no idea what to do – all along, Stangelj was still not attached to any semblance of a draft. He had nothing left, he completely cracked with 1000m to go. Vinokourov eventually let up a bit, shook his head, threw up an arm at Stangelj, and crossed the line. It was a show of exactly what not to do in a team time trial, and a horrendous display of team leadership by Vinokourov. Some of it can absolutely be explained by the heat of the moment, but it was a poor showing by Vino nonetheless.

One of the sport’s greatest time trialists of all time, Chris Boardman, just wrote this gem on Twitter: “Vino knows how to motivate his guys in TTT: ride 50m in front of utterly spent teammate turning around periodically to shake head, revolutionary.”

Sky Goes Secretive
Team Sky’s ride, though not quite good enough to bring home the the victory, was still a Grade A quality effort. The team was a model of speed and perfection. The lasting impression from the day might not be their ride though, but rather the giant wall they erected around the riders as they warmed up before the start.

I understand why it makes sense to create a wall around the riders during the crucial warm-up phase. Sky is known for pursuing every possible angle in search of extra seconds, but methinks that might be pushing it a bit too far. 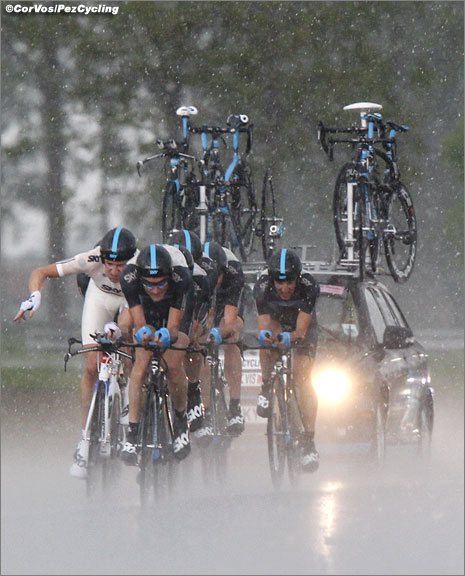 While Linus Gerdemann proposes to open everything in his world up in the name of transparency heading into the Tour de France, including his hotel room, and undergoing pat downs before entering his hotel room every night, Sky further draws the curtain around their program. I know it has nothing to do with doping at all, but it’s an interesting dichotomy: absolute openness compared to as much isolation as possible. It would be a sad trend to see teams all blocked off behind giant walls before the big time trials. It’s one of the pieces of magic that professional bike racing has always had: access to the stars, or at least the feeling of access. It would be a shame to see it go.

We’re Back In Italy
Matt Conn is reporting via Twitter that Charly Wegelius is currently enjoying his post-race massage on TV whilst being interviewed in Italian. How can you not love the Giro?

Porte’s Progress
One of our new favorite pastimes on PEZ is watching the progress of Saxo Bank’s Richie Porte. We live vicariously through Matt Conn’s friendship with the rider, and in these times of desperately searching for a rider to like – well, Richie just seems perfect for the role. Porte has said that he hopes to carry the White Jersey all the way to Verona, but ended up losing it today in Cuneo. His Saxo Bank team put in a reasonable ride, but lost 50 seconds to Liquigas, which resulted in the jersey passing over to relative unknown Valerio Agnoli of Liquigas. Porte showed himself well in the TTT today and continues to turn heads in amazement – he led his team home with a spirited sprint to close out his first ever Grand Tour TTT.

Up Next
The riders have three days until they hit the first mountaintop finish of this year’s Giro d’Italia, the Monte Terminillo on Stage 8.

Tomorrow’s Stage 5 takes the riders from Novara to Novi Ligure over 162 km and includes a veritable tour of the late Fausto Coppi’s early years. The race passes through his birthplace of Castellania and finishes in Novi Ligure where he worked at a butcher’s shop as a young boy. There are a couple of small climbs along the way, but it looks likely that the sprinters will have their day.

If Greipel wants to race the Tour de France in July, he’s going to need to prove that he’s capable of winning at the Giro. HTC-Columbia know they have a problem on their hands: they can’t and shouldn’t leave Greipel home if he shows himself to be a great sprinter in Italy, no matter what Cav says, but if he races poorly, it will be that much easier to send Greipel on a July vacation and leave the spoils to one-win man, Mark Cavendish.