The magic formula states that if you are in a breakaway you need one minute for every ten kilometres remaining in a race if you hope to succeed. Even then, it doesn’t normally work out. Today’s brave escapees were right on the limit, two minutes with 20kms left … and they made it by the skin of their teeth! The sprinters’ teams were left gnashing theirs in despair after a cracking finish to the stage!

Taking the biggest victory of his career is QuickStep’s French rider Jerome Pineau, who had enough to hold off compatriot Julien Fouchard and Japan’s Yukiya Arashiro. The trio edged the bunch by just four seconds, when it looked for all the world that the combined efforts of HTC-Columbia, Sky, Lampre and Garmin among others would peg them back. 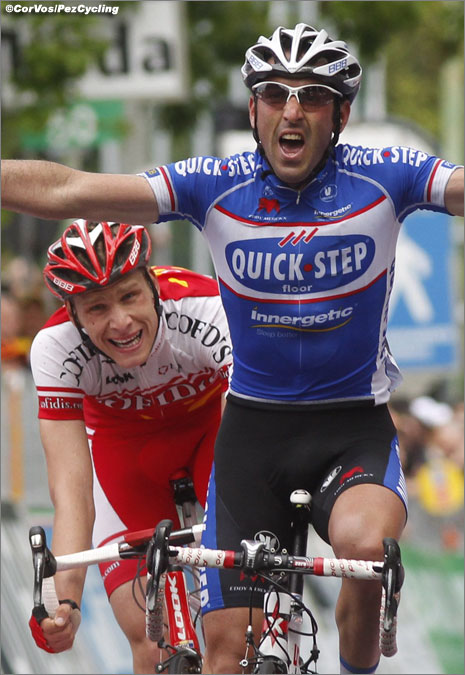 Those final three kilometres, in particular, were thrilling, a pursuit match of three versus 193. There were a couple of moments when the lead trio looked spent, checking over their shoulders, soft-pedalling a little as they navigated a tight roundabout with a snip over one kilometer to go.

Arashiro launched his sprint first under the red kite, ripping the cranks around. Pineau was on him, with Fouchard clawing his way back; the peloton rippling around the bends behind them and closing like a snake on prey.

It was the Japanese rider who again tried to lead things out, but once Pineau came around both him and Fouchard the win was safe in the QuickStep back pocket.

How it went down
We spoke to BBox’s cheery Japanese rider Yukiya Arashiro on Monday morning in Amsterdam, and today he was off the front, leading solo until King of the Mountains leader Paul Voss (Milram), Julien Fouchard (Cofidis) and QuickStep’s Jerome Pineau got up to him. That was the break of the day – they got out to close on six minutes clear before the bunch got a tempo organised. 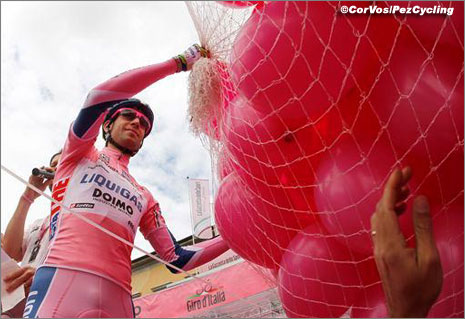 Over the top of the GPM climb of the Avolasco with 63.5kms left to race, the sun was out, the roads were dry and the leaders’ advantage was down to 3’ 15”. Paul Voss leads over and mops up the maximum points for his maglia verde bid. It’s the fuchsia/blue of Lampre and the yellow/white of HTC-Columbia to the front of the pursuit, though, with Petacchi and Greipel eyeing the stage win.

Liquigas were keeping their jersey wearers safe up front – Nibali in pink and Agnoli is white, with Basso lurking just behind.

Next up for the break is the Passo Coppi, a short one-mile effort but with a 10% maximum gradient. Back in the bunch, Cervelo’s Volodymir Gustov is alternately bent-double in pain and giving Lucas Haedo verbals after a coming-together left both on the roadside.

Voss takes the points at the summit, and the gap has gone back out again to 3’ 57”. Down the other side, the roads are wet and the break is cornering veeeery carefully. 44 clicks left to race and the bunch is a telephoto lens dream – one long line streaming around a sweeping 90° left-hander. 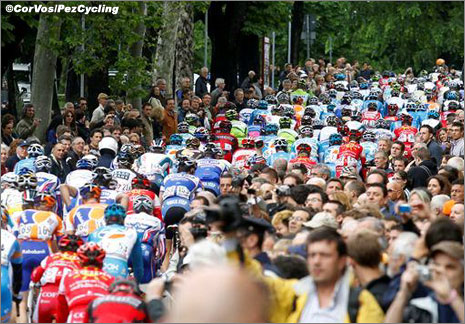 The gap comes down as Garmin-Transitions start to work, too. It’s 2’ 46” as the field follow the breakaways over the finish line for the first time and set off on a big lap around Novi Ligure. There’s a nasty right-hander with about 600metres to go and the riders get a good look at it which is a bonus. Lampre’s Spezialetti is on the front of the field signalling to everyone behind to take care.

25 kms out and Paul Voss goes …. POP!! Nothing left as the road tips up again and he just watches his erstwhile companions cruise away. Five kilometres later, and the front trio are looking a bit frayed around the edges, Fouchard especially starting to rock and roll a bit, but the gap is two minutes (give-or-take) and the dream is still alive. 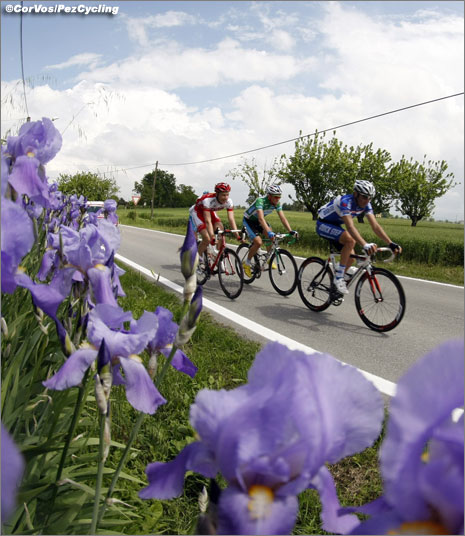 They’re working neatly together, through and off, no funny business – three might make it, one alone won’t. But the gap is being slowly, deliberately throttled. Inside ten kilometres left, it’s still just about a minute, it’s still doable. We’ve got a nail-biter …

Arashiro goes, Pineau gets him back, and takes the sprint as the field explodes into the closing straightway behind them! 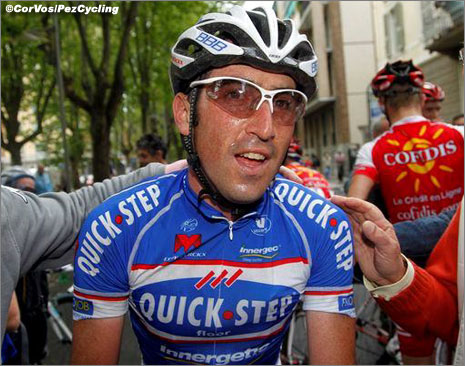 Brilliant stuff from Pineau, a thoroughly deserved win. Anyone who can hang on in a Grand Tour to win from a breakaway on a “sprinters’ stage” can bask in teh acclaim. A word to Fouchard and Arashiro who played a full part in today’s great escape, too.