What would be the point in indulging in the same volcanic metaphors as everyone else? Precisely. None. So here’s how things looked today. The organisers move the start forward as a precaution against Etna losing her temper again, so the riders better move it if they want to get off Sicily in good time for their rest day. One star was in a particular rush …

The riders have made the short hop over the Straits of Messina and begin from that town heading south along the shore, before one pass over Mount Etna before looping around to takle it from the south aspect. A couple of long slogs uphill rather than a firework festival; both climbs of Etna are on or around the 20km mark.

Danilo Di Luca, who, it is fair to say, hasn’t set the roads on fire since his comeback, is one of the early protagonists, but his four-man move gets nowhere. 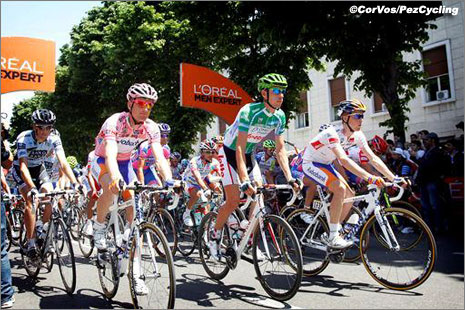 The jersey situation would look a lot different at the end of the day.

The peloton decides that it is prudent to keep them on a reasonably short leash and the gap stabilises around five minutes. The break goes over the top of the first long slog up Mount Etna with Savini taking maximum climbing points. It’s a belter of a descent – great road surfaces, sweeping curves and high speed over the thirty kilometre plunge downhill.

The pace then drops up front and in the peloton, as it looks like Rabobank have lost the impetus to chase things down. Everyone seems to be reigning things in, as the first pass over Etna has shown that it’s hot up there, really hot, so it’s not easy to get the oxygen into the lungs. 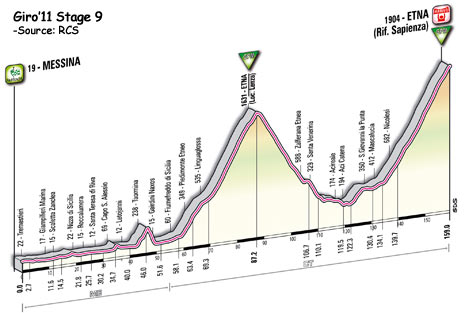 The break continues grinding along. Meanwhile back in the peloton … after recent high-altitude training camps, Alessandro Petacchi has discovered his inner mountain goat and spents a frankly astounding amount of time setting the pace for Michele Scarponi. It’s also a nice payback to the team that drives his sprint train to the line.

His efforts keep the break at a gap of around four minutes as the escapees pound along under leaden skies and pass the 25kms to go banner.

It’s three minutes with 18kms to go as Geox show themselves in the peloton and Popovych and Vanotti begin to lose the wheels in the break.

Fifteen clicks from home and Matthias Frank kicks it on and Jan Bakelandts, Visconti and Lastras go with him. It’s 2-and-a-half minutes to the peloton so no time to hang about.

Lampre are now on the front and they’ve thinned the main group down to about 50 guys. The break is crumbling dramatically and it’s only Frank, Visconti and Bakelandts together as they go under ten clicks to go.

Falling out of the peloton is maglia rosa Peter Weening who blows completely. We’ll have a new leader tonight, so if Pablo Lastras gets a shout in his radio he might be able to rouse himself in the break. Only 22 seconds back this morning, it could be you tonight, Pablo …

Nine to go and Jose Rujano zooms away from the field, pedalling what looks like a kid’s bike. He’s teeny. It’s not Lastras’ day though, as Rujano sweeps past. Up front, Bakelandts has gone it alone and looks good. 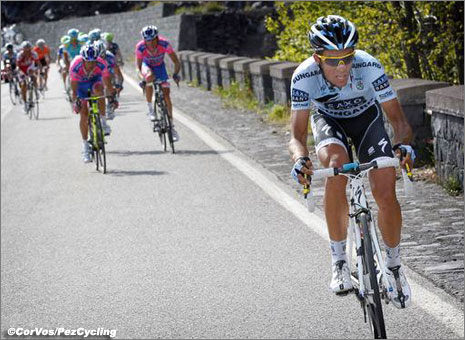 BOOM!! Contador jumps with seven to go as cars start honking and parping their horns. He’s in the big ring as he moves before kicking it down to the 39, and Scarponi turns a glacial gear to get up to him. The break is being swept up; Astana are setting the tempo and we’ve seen no reaction from Nibali.

Scarponi blows … BANG! Contador turned it up a notch, Rujano got him, Scarponi could only look at the tarmac under his front wheel. Nibali tows Arroyo and Kreuziger up to Scarponi.

Contador and Rujano are now past Bakelandts and into the lead. Five to go and Kanstantin Sioutsou goes clear for HTC-HighRoad. Contador has suddenly pulled out 40 seconds on Scarponi! He wants Rujano to work with him, but the Venezualan doesn’t look like he can do anything other than hang on.

1.6kms left and Contador kicks again and Rujano is toasted. The Spaniard is gritting his teeth to the point that they’re almost popping out of his head. It’s a statement of intent but it’s hurting. He has a safe gap and even nearly overcooking the last flat sharp left-hander he has enough in hand to take the stage and the maglia rosa.

Rujano crosses himself with a look of resignation as he takes second and Garzelli leads the best of the rest over at 50 seconds. 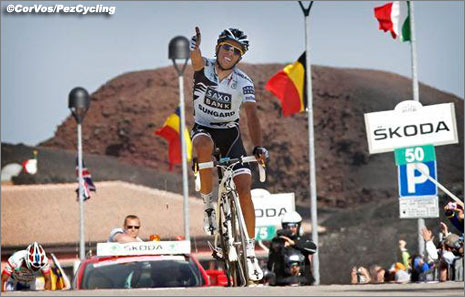 Despite the legal hoopla to come, Contador remains the best stage racer around, but the rest of the Giro top ten looks interesting with Le Mevel moving into third ahead of pre-race favorites Nibali and Kreuziger, with Scarponi really suffering today.

The question will be whether SaxoBank-Sungard have the resources to look after the pink jersey for two whole weeks?

Keep it PEZ for Ed’s view on proceedings!