Race Report: Not a big surprise for stage 1, the top TTT team of the last few years; HTC flew round the town centre course in Turin with a storming time putting Italian time trial champion; Marco Pinotti in the first Pink jersey of the race. RadioShack caused a bit of stir with their second place and the Euskaltel team lost time as usual! Early days though. 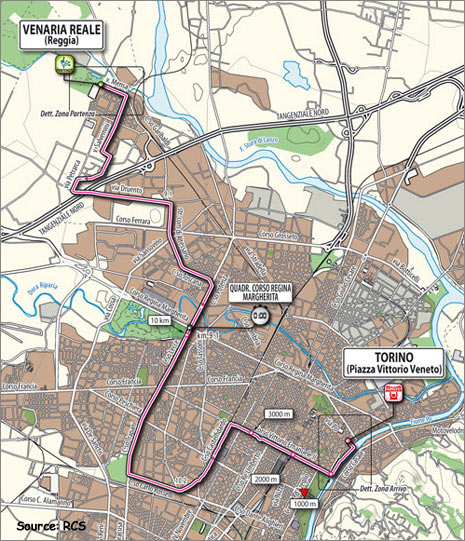 The first “Grand Tour” of 2011 starts with a 21.5 kilometre team time trial from the Palace of Venaria on the outskirts of Turin and winds its way through town to the Piazza Vittorio Veneto on the other side. The first five kilometres are a little technical, but there are quite a few longer straight sections where the teams can push up the speeds. The HTC team of Mark Cavendish were one of the favourites due to them winning the opening TTT’s at last year’s Vuelta a Espaсa and the 2009 Giro d’Italia, putting Mark in the overall lead on both occasions.

15:50 CET and the first team off, in front of an enormous crowd, is Omega Pharma-Lotto. It’s hard to say who the Omega team leader might be or what their goals are for this Giro. Britain’s Adam Blyth makes his second outing in the Giro d’Italia and will be looking for a stage win from a bunch sprint or from an escape group. Omega looked fast on their Canyon TT bikes and they finish with a time of 21:21. Time check time of 10:04. 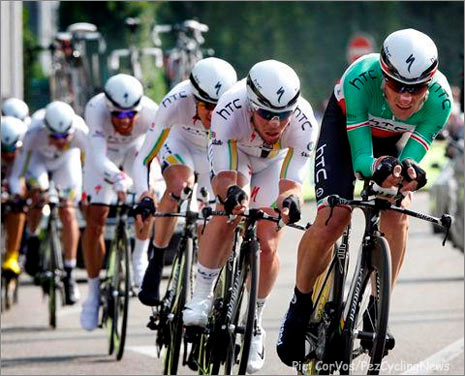 15:54 Katusha next. All the riders on TT bikes except Kuchynski on a normal bike, he is dropped and Katusha lag behind Omega by 4 seconds at the 9.1 time check. Their final time of 22:03 and only six riders finish together, Rodriguez was with them though.

15:58 Astana don’t start well with a rider pulling a foot out with in meters of the start line. They came through 9 seconds slower than Omega at the time check and didn’t get any faster with a finish of 21:49, still faster than Katusha and with seven riders, Kreuziger amongst them.

16:02 Androni Giocattoli is a climbers’ team at heart with Serpa, Sella, Rujano etc. Their time of 21:39 makes (supposedly) big strong teams like Katusha and Astana look slow. This bodes well for the climbers as normally they would be crying over lost time. Time check time of 10:03 was the fastest at that point in the race.

16:06 Colnago-CSF Inox came through the intermediate check with 10:21, but managed to lift the speed slightly to come in with 22:01 which beats Katusha.

16:14 Euskaltel-Euskadi put in an expected slow time of 22:12. Igor Anton won’t be too pleased, but the men from the Basque country have never shined in the team time trial.

16:18 Rabobank was going quite well with a time check of 10:07. Their strong riders nearly catch a Euskaltel rider on the line, but lose out with a time of 21:25.

16:34 Saxo Bank-Sungard with top favourite Contador are on average speed with Contador following Richie Porte coming home with a time of 21:29.

16:42 HTC predictably throw in the fastest 9.1 time of 9:53 and burn off four of their riders to have only five riders at the finish, but Pinotti crosses the line first with Cavendish on his wheel in a time of 20:59. A very hard time to beat!

16:46 Garmin-Cervelo lose Brent Lancaster after his strong riding on the front and have only five riders and still some distance to the finish. They are still fairly fast with 21:23.

16:50 Lampre-ISD, Alessandro Petacchi lead the team through the finish with a good time, the same as Garmin; 21:23.

16:54 Liquigas-Cannondale with 2nd favourite Nibali equal the time of Omega Pharma-Lotto with 21:21. Nibali shouldn’t be too disappointed for the future. 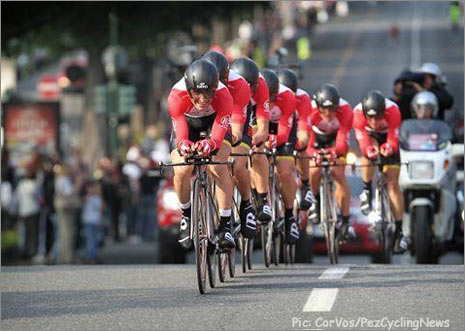 Radioshack came up big with a surprise second place.

17:10 Vacansoliel-DCM has Johnny Hoogerland for later in the race and don’t need to do too much in the TTT, but they still put up a good time with 21:36.

17:14 RadioShack try their hardest causing Ivan Rovny to overshoot one of the corners and the team can’t wait for him. They still manage 21:09 putting them into second spot with only Movistar to come home. 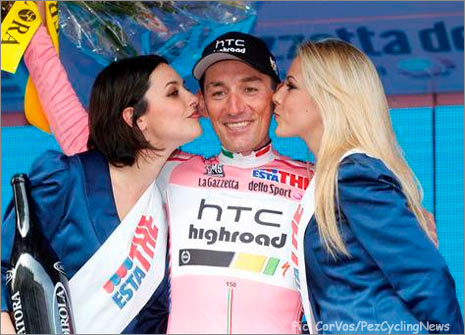 17:18 Movistar are the last team off with last year’s 2nd overall David Arroyo. 10:05 is their time check time. They speed up towards the end and finish with a time of 21:37.

A very fast HTC put their riders in the top positions for tomorrow’s sprint stage…maybe Cav will be first into Parma? Of the top overall contenders; Nibali has 8 seconds over Contador.

• Keep it PEZ for everything Giro, and Ed’s Roadside Report coming as soon as he finds a place to work in the press room…