Race Report: Today’s stage 11 came down to a sprint, but with the tight corners coming to the line there was the inevitable crash which split the leaders giving “Bad Boy” Roberto Ferrari the gap he needed to win. Mark Cavendish was in the wrong gear and Matt Goss wasn’t there at all. It wasn’t Ferrari’s fault this time and he took the stage win well. Yet more Giro excitement! 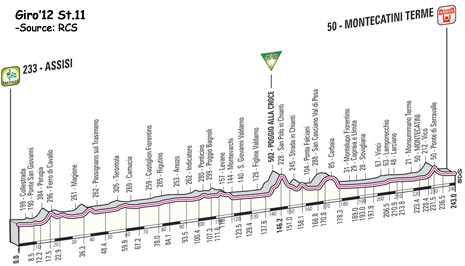 Assisi to Montecatini Terme, 255 kilometres of undulations with two categorised climbs, the first comes after 155 kilometres; the Poggio alla Croce (3rd Cat) which is 502 metres high. The second comes 11 kilometres from the finish and is the 4th Cat Vico, where the race climbs from 40 to 212 metres altitude in 5 kilometres with an average gradient of 5.2% and ramps of 8%. There are also two very sharp bends in the last 600 metres; first a sharp left hander and then a hairpin to the right. A long day in the saddle.

A nice warm day greets Joaquim Rodriguez in his pink jersey in the town of Assisi. It didn’t take long for the race to get going as a break of six riders head off after 14 kilometres, that man Olivier Keisen (Lotto-Belisol) was in it, along with Simone Ponzi (Astana), Stefan Denifl (Vacansoleil-DCM), Manuele Boaro (Saxo Bank), Mickaлl Delage (FDJ-BigMat) and Adrian Saez (Euskaltel), they build up a lead of 4 minutes, but this was pulled back to hover around the 3 minute mark. Simone Ponzi (Astana) was dropped from the leaders with 170 kilometres still to ride to the Tuscan town of Montecatini Terme where the Giro has visited twelve times previously, the last in 2003 when World Champion Mario Cipollini won his record breaking 42nd stage. The great champion of the 40’s and 50’s Gino Bartali was born not far from here in Ponte a Ema, Florence and today’s stage is dedicated to the memory of the champion who died in May 2000.

At the intermediate sprint in Indicatore after 87 kilometres it was Olivier Keisen who took the honours. The bunch had slowed a little and at 140 K’s out the gap had stretched to 4 minutes, but within 10 kilometres it was back down to 2:45 again. 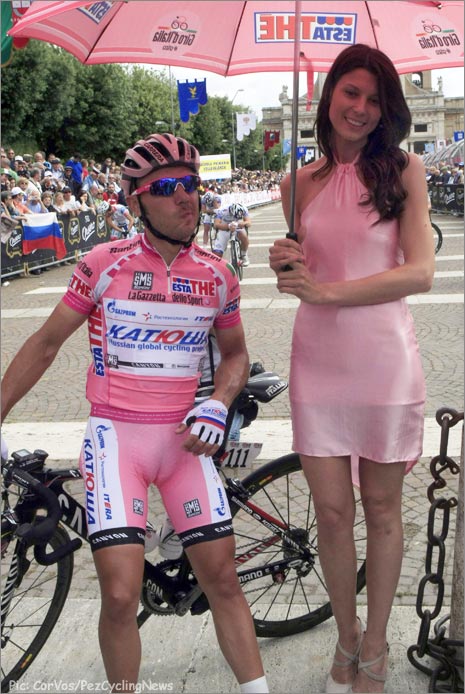 Rodriguez got to take in the perks as race leader.

100 kilometres to Montecatini Terme
Mark Cavendish was looking keen with two men (Hunt & Eisel) on the front; he must have been hoping that the little climb near the finish would not cause him a problem, or that his team will bring it back together. Many “experts” were rooting for Matt Goss for today, so a battle between Sky and Orica-GreenEdge was on the cards.

After 5 hours of racing the five up front where still with a 2 minutes advantage on the Jeremy Hunt (Sky) led peloton, with a little help from Rabobank. Our PEZ-Man Ed Hood out on the course says the race will be into a headwind. Don’t forget to check-out Ed’s day on Il Giro d’Italia. 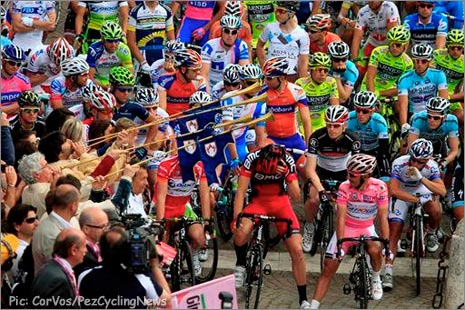 The local horn brigade made an appearance.

Through the second feed zone of the day the gap had slimmed to less than one minute, but as the bunch took their musette’s they slowed and the lead got a little bigger.

As well as Sky and Rabobank, the Liquigas-Cannondale riders have started to move forward with 50 kilometres to go. 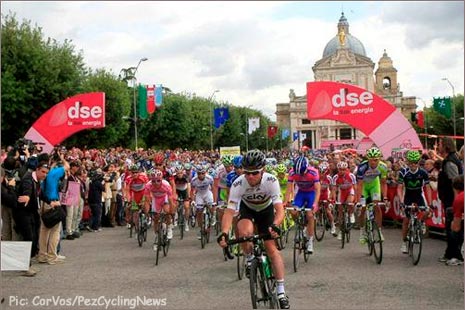 Cav led the rollout from Assisi.

Ten kilometres later and the gap was down to 17 seconds and no one wanted to catch the leaders too soon. Jeremy Hunt was still on the front, but there were other teams coming to the fore, in fact all the teams were trying to put someone at the head of affairs, but without much urgency.

When the escape was in sight of the bunch (about 10 seconds), Manuele Boaro (Saxo Bank) jumped off on his own leaving the others to be swept up by the peloton. Adrian Saez (Euskaltel-Euskadi) tried to stay with him, but he got stuck in no-man’s land. With 25 kilometres to go Boaro had pulled out a lead of 1:07 on the peloton and 35 seconds on Saez.

Boaro is a top man against the clock as he has been Italian TT champ as a Junior and U23, but with 20 kilometres left he was down to 35 seconds advantage as Liquigas-Cannondale had taken over the chase, Saez had been caught.

Boaro was reeled in just after the bell for the lap with the climb of Vico, 11 kilometres from the finish with Movistar and Orica-GreenEdge on the front. Dennis Vanendert launched himself up the road on the foothills; he was joined and then passed by Mirko Selvaggi (Vacansoleil-DMC).

Italian champion Giovanni Visconti (Movistar) put in a hard effort to pass Selvaggi and split the peloton. He took three others with him and was joined by four others. Sky had the job of bringing the race back together for Cavendish as Matt Goss had missed the last train into Montecatini.

Sky pulled it all back together to 4 kilometres to the line and kept it all until the last kilometre where Visconti hit the front to lead-out his Movistar team mate Ventoso in to the tight bends. The last sharp turn to the right and three or more riders hit the deck causing the sprint to split leaving Thomas Vaitkus (Orica-GreenEdge) on the front with Roberto Ferrari (Androni Giocattoli) on his wheel ready to jump round him. Francesco Cicchi (Omega Pharma – Quick-Step) and Mark Cavendish just had too much to do to get up to them and it finished with the peloton well spread out crossing the line. 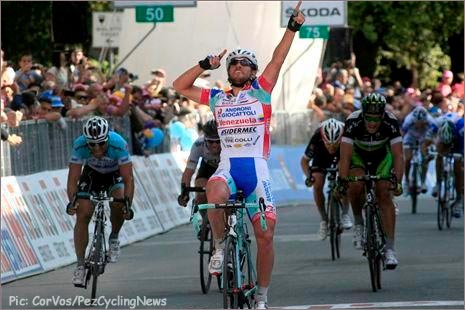 Joaquim Rodriguez kept the pink jersey, but Matt Goss lost his red points jersey to Mark Cavendish who still has his baby and girlfriend on the race to greet him at the finish.

Keep it PEZ for all the Giro action and Ed’s roadside reports.