Race Report: Another mad crazy day in Italy, many had said today would sort out the top five places in this year’s Giro d’Italia, how right they were. The top five crossed the line together (with Pozzovivo), the others? Still finishing a long time later. There was no need to attack today as the mega-hard course sorted out the wheat from the chaff.

Here is the 3D profile from cyclingthealps.com:

At 12 noon the peloton lined up, but without Daryl Impey (Orica-GreenEdge), Theo Bos (Rabobank) and Peter Kennaugh (Sky), later to be joined by Gaetan Bille (Lotto-Belisol) and Thomas Vaitkus (Orica-GreenEdge). The weather was better than recent days, around 22єC, but the word is that it has been snowing on the Stelvio, so Saturday’s stage will be interesting. Many riders today were wearing black ribbons in memory of Xavi Tondo who died a year ago. 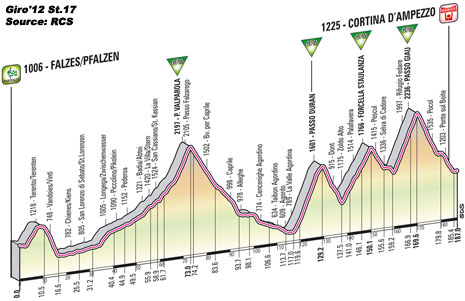 After a few attempts by different groups on the climb out of Falzes, the first serious break came on the climb of the Passo Valparola. Branislau Samoilau (Movistar), Matteo Rabottini (Farnese Vini-Selle Italia), Kevin Seeldraeyers (Astana), Jose Serpa (Androni Giocattoli) and Matteo Montaguti (Ag2r-La Mondiale) soon had a lead of 2 minutes on the pink jersey. Behind; Oliver Zaugg and Thomas Rohregger of RadioShack-Nissan attacking off the front to be chased down by around 20 riders, they were reeled in by the peloton, all this was after 1 hour of racing with 140 kilometres still to go.

The break had pulled their advantage out to over 4 minutes with 120 kilometres to go, Matteo Rabottini of Farnese Vini-Selle Italia is in the blue jersey of mountains leader and he was in the escape to get more GPM points and he will be try to repeat his stage 15 win on Sunday.

The Sky team were riding tempo at the front of the bunch with the red jersey of Mark Cavendish near the front, he was stocking up on food for the ride ahead.

Matteo Rabotini was first over the top of the Passo Valparola for full points as the others put on jackets for the descent, Rabottini made do with a copy of the La Gezzetta dello Sport up the jumper as Montaguti headed off down the hill first. The gap to the bunch was 4:17, it would have been much more, but the Euskaltel-Euskadi team put a bit of speed into the semi-chase.

The Euskaltel-Euskadi team were not holding back and put the pressure on through the feed zone with 90 kilometres left, the gap had come down to 3:37, the Basque team’s best placed rider was Mikel Nieve in 18th place at 4:20, but it could be they wanted a repeat of yesterday’s stage win.

80 K’s left and the Euskatel-Euskadi team were in control with seven riders on the front, meanwhile at the back Mark Cavendish was still there with the bunch having got back on, on the descent.

Euskaltel carried on with their efforts and the lead came down to 2:40. Then at 65K’s out the Liquigas-Cannondale team took to the front and riders started to be dropped from the bunch as was Montiguti from the leaders and the gap became 1:50. Jose Rujano (Androni Giocattoli) was in trouble on the Passo Duran as was Alessandro Ballan (BMC).

Euskaltel put Amets Txurruka off the front with his team leader; Mikel Nieve on his wheel. Txurruka took Nieve clear and then sat up to wait for what was left of the pink jersey group. At the top of the Duran; Rabottini took full points from the other three as Nieve crossed at 31 seconds with Liquigas ripping the peloton apart 1:16 down.

50K to Cortina
Dropping down into the valley, before the climb of the Forcella Staulanza, the break split leaving Kevin Seeldraeyers (Astana) out on his own at the front as Mikel Nieve caught Matteo Rabottini (Farnese Vini-Selle Italia), Branislau Samoilau (Movistar) and Jose Serpa (Androni Giocattoli), they were 36 seconds behind Seeldraeyers and the pink jersey was at 1:42.

Nieve was intent on closing on Seeldraeyers, Rabottini couldn’t hold on and Nieve had Seeldraeyers in his sights within 3 kilometres to give us four ahead; Kevin Seeldraeyers (Astana), Mikel Nieve (Euskaltel-Euskadi), Branislau Samoilau (Movistar) and Jose Serpa (Androni Giocattoli). In the bunch Liquigas were still on the front, but with the Lampre-ISD team of Cunego and Scarponi all just behind the team of Ivan Basso.

On the Forcella Staulanza; Liquigas held the leaders at around 1 minute, Mikel Nieve drove all the way up the climb and Seeldraeyers took the intermediate sprint and pushed on again. The peloton, or what was left of it, came across the line 48 seconds behind the Astana man and the break fell apart as Nieve seemed to have lost any interest in pushing on with the break with 43 kilometres still to ride.

The race was all together with 42 kilometres left and all the stars were readying themselves for the action over the last two big climbs. Liquigas on the front with Lampre behind, then came Hesjedal with the pink jersey of Rodriguez next in line. The lead group was down to under 30 riders as many had been tailed off on the previous climbs. Astana’s Roman Kreuzigger was in big trouble and blew on the climb as they came under the 40 to go banner.

Farnese Vini-Selle Italia took to the front for the top of the Forcella Staulanza to take points to keep team mate Rabottini in the mountains jersey and it was time for the descent before the monster climb of the Passo Giau. On the way down Kreuzigger had lost 1 minute and it was looking like his chances of a Giro win were over.

On the Giau, Liquigas star leadman Szmyd had a problem which brought Basso’s team down to two, De Gendt was next to go and also Moreno. The lead group was now down to eight riders on the wheel of Basso, with Cunego, Hesjedal, Rodriguez, Scarponi and Pozzovivo clinging on.

The white jersey of Henao was dropped, leaving just Basso, Scarponi, Hesjedal, Pozzovivo, Rodriguez and Uran at the head of affaires.

Ivan Basso was left on the front without any help, but at that moment it was every man for himself. Hesjedal put a little pressure on as they passed Didi the Devil, but it was just a test.

Basso had a smile on his face, or a grimace, he was in the driving seat. Behind there were riders all over the course. Uran took up the reins with Hesjedal on his wheel and Rodriguez watching for any moves. With the steepness of the climb no one had the speed or strength to make a jump. Mikel Nieve was trying to come back to them, but there were no other rider within sight behind.

Basso again took to the front, but all six riders were watching each other, Nieve wasn’t getting across, either was Cunego or Gadret farther down the hill.

Scarponi led up towards the top of the Giau, then Pozzovivo put the pressure on for the line causing all of them to suffer, especially Uran and Scarponi who lost the wheel and had to chase on the descent. The other riders behind were in all sorts of trouble in groups no bigger than four riders.

Hesjedal was the faster descender; he had Basso, Rodriguez and Pozzovivo on his wheel with Uran a little farther back and Scarponi trying to close on them.

Rodriguez moved past Basso to get on the wheel of Hesjedal, the others were taking it a bit more gingerly; Scarponi was having problems with cramp in his thighs. The four up front; Basso, Hesjedal, Rodriguez and Pozzovivo had 29 seconds on Scarponi with 9 kilometres to the line.

Basso kept the speed up giving Uran a hard time to catch up as he was only metres behind the four. Cunego got together with Moreno and three others at over 1 minute. 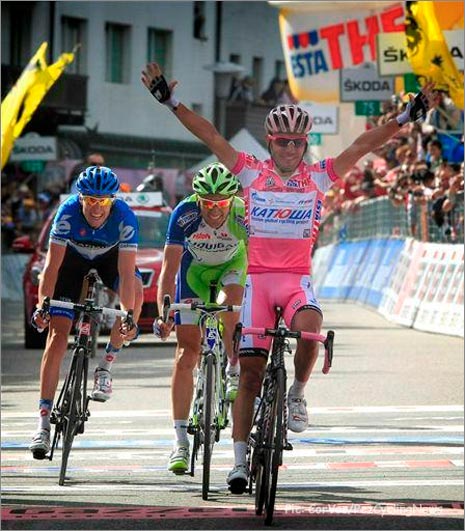 There’s no better way to end a stage than with the gc leaders duking it out.

5 K’s to go
Rigoberto Uran caught Basso, Pozzovivo, Hesjedal and the pink Rodriguez; Scarponi had recovered and was making his way back to the front making the junction with 2 kilometres to the line giving us the six up front again.

Basso attacks, Hesjedal pulls him back to save his second overall. Basso is left on the front, Scarponi attacks and Basso closes the gap with Rodriguez on his wheel. The little Spaniard gives it his best to come round them all for the stage win. The stage was for Xavi Tondo and Joaquim kissed the black ribbon on his Maglia Rosa.

Next group of nine riders fight it out, but all the important stuff had all ready been decided at the pointy end of the race. 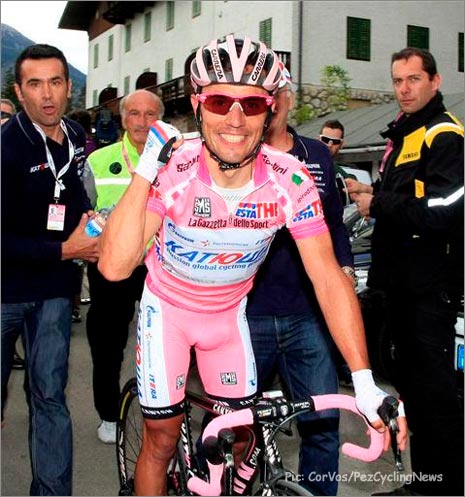 An emphatic win for Rodriguez.

Rodriguez still in the pink and we now know the top five, Astana the big losers today as Tiralongo and Kreuzigger blew big time.

Stay PEZ for all the excitement to the end in Milan.