Race report: Aaah, sweet relief! It’s nearly all downhill today after that epic haul to Cortina d’Ampezzo just 24 hours ago. Of course, it’s not all plain sailing. There’s one little lumpy climb in the middle. And the sprinters’ teams are desperate to keep it together. And Cav wants the win for the points jersey. And the escape artists want to sweep a few more brush strokes on the stage canvass and will do everything to get away. And the contenders will be vigilant …

Only 139 kilometers on today’s menu and it’s probably the easiest of the race. No major obstacles, but it’s a day where the speed will probably be super-high and those with overall intentions will need to watch everything like a hawk. If a gap opens here, it could be hard to close if the peloton is going at 55 kph. 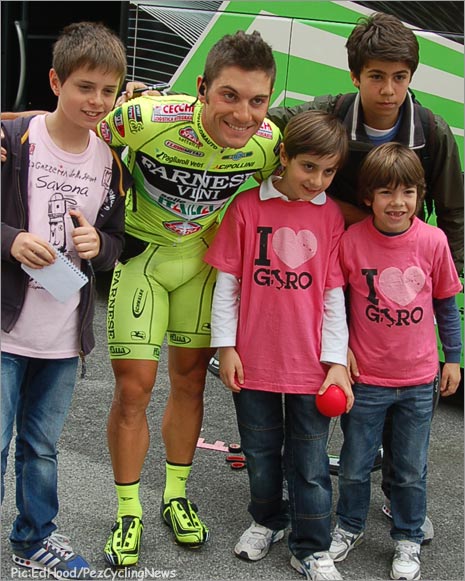 Andrea Guardini is happy to pose with fans – that’s class.

So many sub-plots to consider: points jersey contenders looking at the intermediate sprint; sprinters wanting the last shot at the line for them in this Giro; under-performing teams (good afternoon, Rabobank) looking for TV time and a stage win.

Inside the first 20 kilometers and four are away: Stef Clement (Rabobank), Manuele Boaro of Saxo Bank, Angelo Pagani (Colnago-CSF Inox) and Farnese Vini are represented by Pier Paolo De Negri.

It’s doomed to failure as – although they get out to three minutes’ advantage – the sprinters’ teams have a collective lightbulb moment: “Shit, there’s an intermediate sprint coming up!”. The gap is vaporized in just a few kilometers.
Sky do the work and are rewarded by Cavendish and Thomas taking first and third. As soo as the sprint is done, a new escape jumps out.

Delage (FDJ-BigMat) is involved. So are Martijn Keizer (Vacansoleil), Olivier Kaisen of Lotto-Belisol, and Clement again. They take a minute, but surely they’re doomed, too? Sky keep tabs on tings and the lead is wobbling around the 45 second-mark with 40kms to go. 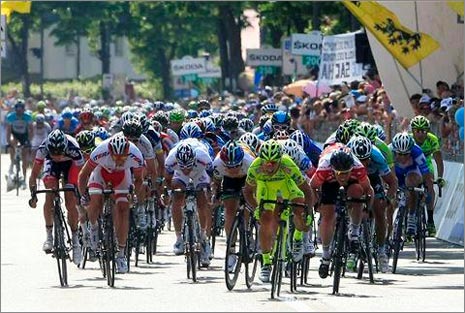 Guardini jumped first from 4th wheel, and in the half second it took to overtake Cav (on second wheel) was already going too fast for anyone to catch.

Inside twenty kilometers to ride and Lampre-ISD perform an emergency team leader recovery as Scarponi has a mechanical … just when you don’t need one, and the peloton going full bore.

Boom! With the leaders being hauled in, Lars Bak jumps out of the peloton, and up to them in a flash. Delage is with him as the others are swallowed.

Ten clicks to go and Delage and Bak are blasting along with no time to take in the still gorgeous scenery. Sky and Liquigas are to the fore in the peloton and the duo’s lead is only single-digit seconds.

Six kilometers left and Bak leads Delage through a sweeping left-hander. There are distressingly long straights to negotiate for the breakaway and the peloton just hovers in the near-distance … Delage looks over his shoulder, sees the sprinters’ teams. Crap!

Four to go now: Bak and Delage sit up. It’s all over. Sky and RadioShack-Nissan set up rival sprint schools, and there are representatives from Farnese-Vini, Garmin-Barracuda, OmegaPharma-QuickStep and SaxoBank. Bjarne Riis’s boys in blue take over at the front and drill it for the line. NetApp bring Daniel Schorn forward.

Two clicks to race: hell-bent for the line now. Cavendish sits about eight riders back, sheltered.

One to go: Eisel shoves his way to the front and his Sky team-mate Geraint Thomas tows the field round the last corner. Cavendish on his wheel. Cav goes on the left but … on the right, away rockets Andrea Guardini. Cav looks across as the Farnese-Vini colors flash into the lead.

Cav tries to respond but Guardini’s done it! An incredible sprint win from the Italian who is beside himself with joy. Cav looks thoroughly disgusted, beaten in a flat-out sprint which happens very, very rarely. A few – possibly – crucial points towards the Red Jersey contest gone. 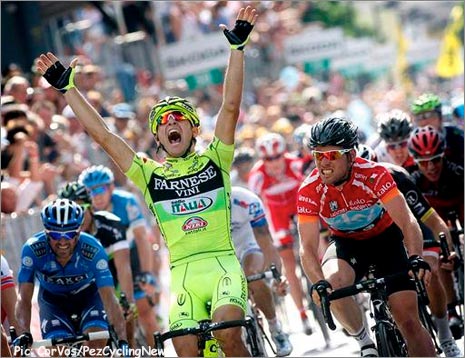 A fantastic sprint by Guardini draws a look from the World Champ.

Ferrari stayed upright for third ahead of Robbie Hunter, and the whole shebang is completed in a couple of heartbeats over three hours. A lightning-fast 49.4 kmp/h day in the saddle. All the contenders kept it together nicely ahead of tomorrow’s high-altitude horror show, so no overall change.

Jered and Ashley are on the corsa again so stay tuned to Pez for their as-always fascinating and beautiful take on the greatest of the Grand Tours.

Giro di PEZ: In Love With The Dolomiti