Race report: ‘Wow’ was the tweet from Garmin-Barracuda’s boss man Jonathan Vaughters after a fascinating, sinew-tearing, nerve-shredding day in the gods … the Giro returned to its mountain home with a vengeance today with five climbs including the Passo Manghen and two trips up the Alpe de Pampeago. As the riders crawled up, here’s what went down!

The stage rolls uphill pretty much the whole of the first 100kms, with the initial summit being the Sella di Roa, a second category climb, at 78kms. The break gels and one of the main protagonists is the infamous Emanuele Sella (Androni Giocatolli) who has form on these roads. 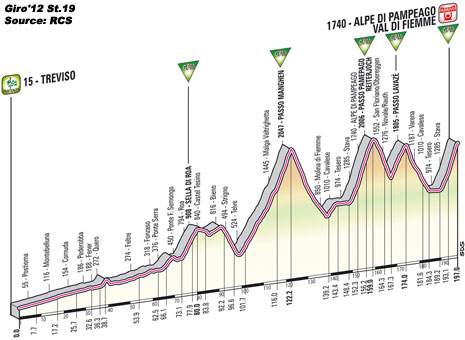 He used the day’s second climb, Passo Manghen, to set-up a stage win when he was on blistering form back in 2008. Unfortunately, it would be fair to surmise that that’s not all he was on given the subsequent pharmacological revelations.

There are a couple of other handy climbers with him including Rabobank’s Juanma Garate and BMC’s Ivan Santaromita. A couple of sprinters are trying to get far enough up the road that they can latch onto the autobus when it trundles through later (yesterday’s stage winner Guardini and SaxoBank’s Haedo) and there are a screed of other stage-hunting hopefuls. 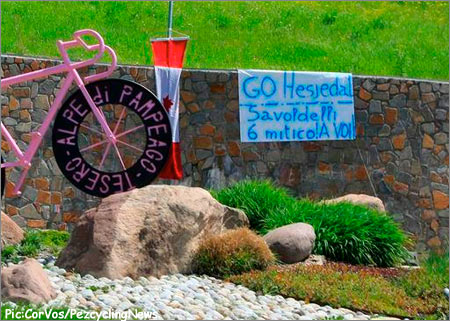 Making up the break are Ventoso (Movistar); Zeits (Astana); Pirazzi (Colnago-CSF Inox); Flecha (Sky); Pauwels (OmegaPharma-QuickStep); Benedetti (NetApp); ex-maglia rosa Adriano Malori of Lampre as a target for Scarponi later on; Pez pal Adam Hansen (Lotto Belisol); Cazaux (Euskaltel); Ignatyev (Katusha); Casar (FDJ) and RadioShack-Nissan’s Thomas Rohregger.The bunch lets them get on with it … the gap goes out towards eight minutes as the bigger battles are yet to come.

Over the Sella di Roa it’s Pirazzi, Rohregger and Pauwels over first.

The race runs a little up/down before a plunge into Telve – where the break has just under nnine minutes – and the beginning of the horrific Passo Manghen.

The full statistics are: a 20.5km climb averaging 7.4% BUT the last 6 kilometers get harder and steeper, rearing to an average of 10% and a maximum of 15%! And it starts at 383 meters altitude and tops out at 2047 meters!
Jose Rujano (Androni Giocatolli) has opted not to bother with the agony and has quit, which I’m sure will do little for his relationship with his boss, Mr Savio!

Benedetti is working hard in the break, and the gap comes down a little as Lampre and Liquigas help Katusha to control things.

The break claws its way to the top of Passo Manghen and Pirazzi nips out for the points ahead of Rohregger. It’s a nasty, twisty descent and Robbie Hunter seems to have an argument with the roadside after a tight corner.

Fifty clicks to ride: Liquigas are whipping everyone along, and the gap is 4’19”.

Onto the first (!) ascent of the Pampeago for the day now! 45 clicks from home and the break is splintering: Pirazzi, Rohregger, Casar are away on their own. Then Rohregger pops. The breakaways are splitting into factions. At the back of the peloton, Tiralongo (Astana) is in trouble and then Katusha’s Dani Moreno also struggles.

Liquigas just tap out tempo, the fans nonchalantly jog along beside them shouting encouragement at Ivan Basso.
42kms left: Casar and Pirazzi climb through a tunnel, as Szmyd (Liquigas) is dropped and Kreuziger (Astana) is wobbling around, gabbling into his radio.

Casar leads over the Pampeago for the first time, and he and Pirazzi have 30 seconds on Rohregger; a minute on a group led by Garate and Flecha; and just over three minutes to the peloton … or what’s left of it.

Down and up again, onto the shorter, Passo Lavaze’, and Casar does the bulk of the work. Still no major move in the peloton. Basso using his Liquigas team; Stetina and Vande Velde looking after Hesjedal; Rodriguez looking comfortable … well, as comfortable as possible, given the circumstances!

Pirazzi again takes the points at the top. Behind, Astana’s Seeldrayers attacks and then Kreuziger makes a move, a big jump. He’s no threat overall now, so the capos watch him go. The Astana duo works until Seeldrayers can do no more.

This is more like the Kreuziger that threatened the maglia rosa a few days ago! Casar/Pirazzi have two minutes on Kreuziger and about three on the bunch. There are chasers and escapees littered around in between now.

11kms left: Casar and Pirazzi are rejoined by Sella and Rohregger. Not too far behind, Kreuziger is riding with the OmegaPharma duo of Cataldo and Pauwels. Inside ten to go and the Kreuziger chase is inside 1’17” behind the front quartet.

7.7kms left and the leaders swing sharp left onto those toruously narrow, steep lower slopes of the Alpe di Pampeago. Kreuziger leads the chase, cornering like a motorbike. Now, Sella ups the tempo at the front and Rohregger is struggling.

6.4kms left: Pirazzi attacks again, having wound Casar up all afternoon with his fairly unreasonable accelerations. Casar closes and counters.

In the maglia rosa gruppo, Agnoli (Liquigas) explodes and comes to a virtual standstill. Garmin-Barracuda, for Hesjedal, power through to the front.
Kreuziger and Cataldo are closing like wolves tracking a wounded deer, it’s just seconds to the leaders now.

Five kilometers to race! Peter Stetina on the front of the favorites’ bunch, smashing it! Kreuziger has two flag-waving Czech fans running beside him … he’s out of the saddle, ramps it up and Rohregger and Pauwels pop. The Czech picks up Casar and sets his sights on Pirazzi.

In the bunch, Damiano Caruso takes over at the front for Basso, but his leader is grimacing now! Hesjedal is third wheel, Scarponi looks tired.

Scarponi goes, but Hesjedal is on him, and Henao.

3 clicks to go: Kreuziger has hit the front of the race, with Casar desperately hanging on. The Astana man tries again and Casar is cracking! 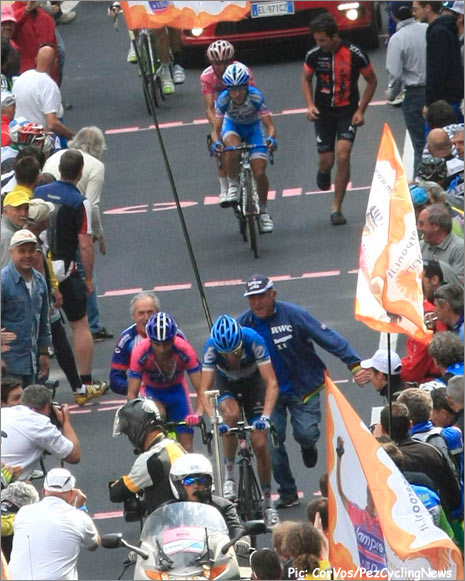 Two to go: Kreuziger is solo and flying to the win! In the bunch, Hesjedal parries, looking over his shoulder! Scarponi goes with him, but Rodriguez and Basso struggle to respond! Hesjedal swigs down a drink as Scarponi ramps it up. Basso in trouble! And Rodriguez! It’s not decisive, but …

… Pozzovivo claws his way back, and Rodriguez is on his wheel. 1.5kms to go and Hesjedal ups it again!

Kreuziger is out of a tunnel and into further purgatory as he looks for the red kite. Hesjedal/Scarponi are closing on him. Hesjedal out of the saddle now and Scarponi is gapped!

Kreuziger is battling gravity, reality … and Hesjedal who is trying to blow the other favorites away.

300 meters left and Kreuziger is out of the saddle, rocking his shoulders from side to side. It’s slow-motion climbing now, a brutal stage! 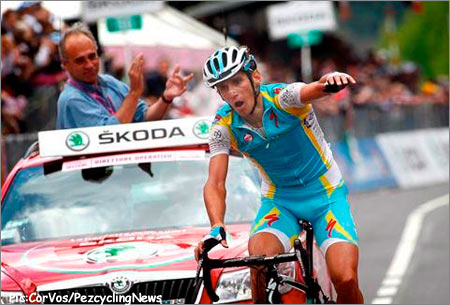 Kreuziger is to the line for a Giro-rescuing stage win, he celebrates and collapses to a dead stop. Total exhaustion. Hesjedal is second, at 19 seconds. He’s taken twelve seconds from Rodriguez who jumps a shattered Scarponi on the line. Basso loses 35 to the Canadian.

Could this be the day Hesjedal ‘wins’ the Giro? A fabulous ride from the Canadian. Incredible guts from Kreuziger for the win, and from Scarponi and Rodriguez for the fight.

Basso and Liquigas will be distraught … all that work over the last week and then this. He’ll have to think of something ahead of tomorrow, which, incredibly, is another epic .. to the Stelvio! Keep it Pez!

Giro di PEZ: The Happiness Of It All