We finally start getting a little lumpy in the Giro as today’s Distance 207km from Urbino to Porto Sant’Elpidio offer up the race’s first editions of some climbing with four categorized climbs and plenty of rollers sprinkled throughout. The sprinters have had the early say, and today wouldn’t feature them. 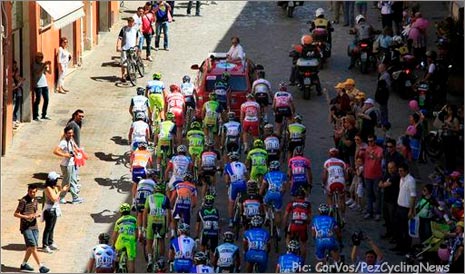 Picking up the action with some 50 + km to go, and up penultimate categorized climb of the Montelupone, Rubiano tried his hand, but his solo move didn’t stick and the break brought him back. 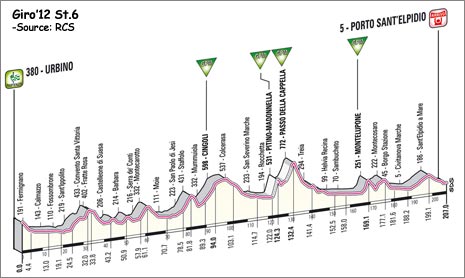 Behind, Liquigas were doing all the work, cutting into the break’s lead but with 50km to go it was certainly not a foregone conclusion the escapees would be caught. The break looked tired, the group looked tired. Hell, everyone looked tired! The maglia rosa himself – young phenom Taylor Phinney – was struggling up the latter climbs, his mouth open and his shoulders rocking.

Ahead, the break’s rhythm was disrupted as Saxo Bank’s Luke Roberts cleaned up an intermediate sprint.

Back behind the bunch, it seemed Navardauskas’ stint in pink would be over today and he fell off the back and was clearly laboring. The team car gave him a bottle and went up to the bunch. But he was not alone as Liquigas’ tempo had brought the break back to four minutes and change, and whittled the main group down to only 50 or so riders.

The break hit the nasty little Montegranaro climb, average gradient in the low teens. Cruel.
Behind, Navardauskas and a few other dropped riders made the hard effort and reintegrated the pack. Nice work fellows! Word came back another rider, BMC’s Thor Hushovd, had abandoned the race entirely. The God of Thunder’s woes continue in 2012.
Unfortunately for the race leader, the hill proved too much and the young Lithuanian was dislodged again from the group. Meanwhile, up front, Zapatero and other GC favorites had come to the head of the group to keep an eye on things.

As the break’s advantage dipped once again, Adriano Malori of Lampre decided to test the break, and with one quick acceleration, split the group, taking 4 others with him and leaving the others behind.

Androni’s Rubiano made the split, then promptly countered, getting himself a gap.
BMC was helping Liquigas make the pace behind, and eking into the lead ever so slightly.
Rubiano’s move stuck, he was all in now as he gapped his former break mates on the climb and gained a comfortable advantage.

The maglia rosa was enjoying no such luxury, reduced to pushes from the crowd as he labored well behind the main field.

Rubiano went under the 25km to go banner, still with 4:30 in hand over the bunch, with his breakmates somewhere in no man’s land. It looked good for the tiny man to get the stage win. Behind, Pozzato seemed to realize this and attacked the main bunch, maybe trying to rally a chase with some more impetus.

Lampre’s Malori was the virtual Maglia Rosa and drove hard to catch his former breakmate Rubiano up the road as the riders went over these relentless rollers in the final 20km. The gap between the two was still just over a minute.

Garmin’s Vande Velde was assisting Liquigas with the chase behind. The math battle between Rubiano and Malori continued ahead, with Rubiano eyeing the 20 second win bonus, and if rode hard enough, the maglia rosa. Malori was still thinking the same and working with 3 other survivors of the break, gave it everything he had. Under 10km to go, Rubiano and 1:20 in hand to the chasing Malori group, and roughly 3:30 to the main bunch, or what was left of it.

Garmin committed another man to the chase behind, thinking of Hesjedal, but it was too little too late for the American squad, as Rubiano was inspired now and had his teeth firmly into the race. And he clearly would be the stage winner now under 2km to go, the only question remaining would be who wears pink tonight? 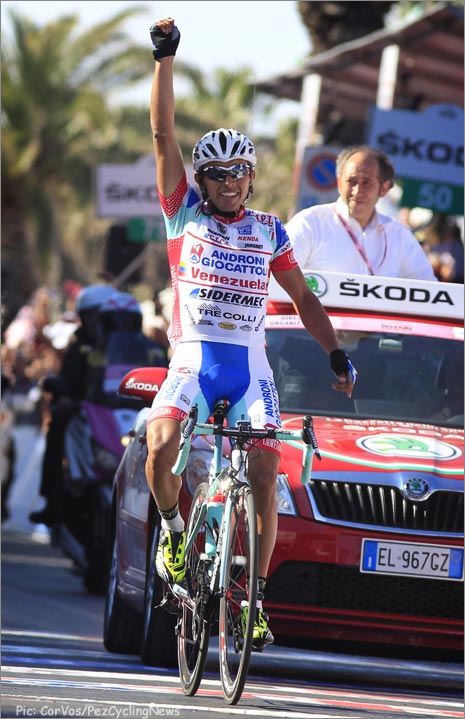 The modest budget Androni Team always delivers at the Giro, tpday it was Miguel Rubiano doing the honors.

The chasing four began shadow boxing, a most odd occurrence indeed. One would think Malori would have just driven the pace, but in the end he won the little sprint for 2nd and the valuable bonus. 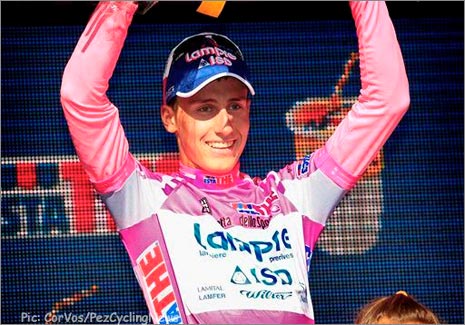 Lampre’s Adriano Malori enjoys the biggest day of his career.

The group behind continued to close, maybe Garmin’s Canadian would have earned enough time? Malori was wildly celebrating and being hugged by team staff, so I put my abacus down as he’d done enough on time to take Pink. Rubiano will wear the mountains jersey tomorrow for sure.