Race Report: Yet another exciting day in Italy brings yet another new wearer of the pink jersey, this time its Garmin-Barracuda’s Canadian; Ryder Hesjedal who leads overall. The long break was pulled back on the finishing climb and Michele Scarpone showed his Giro was far from over by jumping away from all the favourites, Paolo Tiralongo got the better of him at the line, but it was all action. Hold on to your seats! 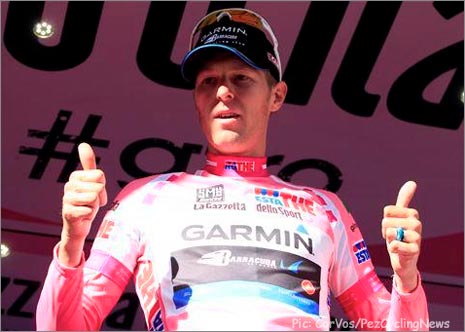 Today’s stage 7 is generally all up-hill, the start town of Recanati is at 60 metres altitude and the finish sits at on the top of the 2nd Cat Rocca di Cambio at 1361 metres and there are a lot of up’s and down’s between, including the 3rd Cat Colle Galluccio after 101 kilometres.

It was a nervous peloton that lined up in Recanati for another hard stage, the “experts” on Italian TV station RAI Sport 2 were going for Damiano Cunego (Lampre-ISD) as stage winner, but as usual there was a big argument.

The day’s break went away from the start; Fumiyuki Beppu (Orica-GreenEdge), Matteo Rabottini (Farnese Vini-Selle Italia), Reto Hollenstein (Team Netapp) and Mirko Selvaggi (Vancasoleil-DCM), Hollenstein being the best placed overall at 1:21 from the pink jersey Adriano Malori (Lampre-ISD). There were a few notable abandons yesterday; Tyler Farrar (Garmin-Barracuda), Thor Hushovd (BMC), Pablo Lastras (Movistar) and Romain Feillu (Vacansoleil-DCM), they were joined by Gianni Meersman (Lotto-Belisol) today. The last group to finish yesterday included Mark Cavendish, they just beat the time cut, but there has been talk of how they managed it. According to Tuttobici the group covered the last 15 kilometres in 16 minutes with the help of a helicopter!

The lead group built up a fine lead of nearly 9 minutes with 100 kilometres ridden, the bunch were led by Lampre-ISD on the climb of the Colle Galluccio with a little help from Liquigas-Cannondale. Whether Lampre will want to defend the pink jersey for a rider who is not one of their top men is doubtful, they will hope to need all their strengths later in the Giro to help their leaders; Michele Scarponi and Damiano Cunego.

Fumi Beppu was first over the top of the 3rd Cat Colle Galluccio, jumping past Matteo Rabottini and Reto Hollenstein for the mountain points, the peloton were a little closer at 7:49 at the summit. 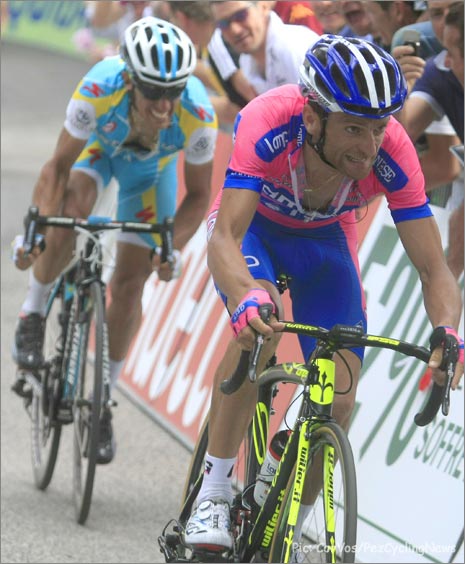 Michele Scarponi rose from the depths with a storming finish, only pipped by Astana’s Paolo Tiralongo for the stage.

100 Kilometres To Go
The four were working well together and the thought of a Team NetApp rider in pink must be high in the mind of Reto Hollenstein, it would good recompense for the (alleged) money the team paid for its “Wild Card” entry.

The lead fluctuated around the 8 minute mark as the bunch stayed together, it was easy enough for Mark Cavendish to go back to the Sky team car to get bottles for the other members of the team, it’s not often you see a World champion doing the water carrying. The temperature had dropped slightly too around 20єC, but with high humidity.

The pace started to pick up as Lampre where joined by Katusha to put more pressure on the peloton, and with 60 kilometres to go the four escapees had been pulled back to 6 minutes 11 seconds.

The Last 50K’s
There was a long descent down to the intermediate sprint in L’Aquilia at 178.8 kilometres from the start in Recanati, the lead was now at 2 minutes as Fumi Beppu took the sprint. Garmin-Barracuda had also started to lend a hand in the work and the lead was not going to be enough for the four to stay away to the finish.

The climb of the Rocca di Cambio started about 5 kilometres after the sprint, the calculations were that the leaders would need at least a 3 minute in hand for them to succeed, as they had started to attack each other after the sprint it was only a matter of time until the bunch caught them.

In the valley Matteo Rabottini attacked the leaders, much to the annoyance of Mirko Selvaggi, this was splitting up the leader’s effort and going under the 20K banner he was 1:50 ahead of the bunch lead by Movistar, BMC, Liquigas-Cannondale and Astana as the climb began.

Stef Clement (Rabobank) jumped off the front of the bunch causing a few to lose grip at the back. He didn’t stay away for long and was soon back in the fold thanks to the Colnago-CSF team. This sent Stefano Pirazzi up after the leaders; he caught and passed them all except Rabottini as the pink jersey of Malori was dropped.

Jose Herrada (Movistar) chased the two up front and gets with them, next to go was the little climber; Emanuele Sella followed by his Androni team mate Jose Rujano. The team were on fire as Carlos Jose Ochoa was next for the team of Gianni Savio, although none of them stayed away.

Last 10K
8 kilometres to go and the lead was 34 seconds for Herrada and Pirazzi as Rabottini had been dropped by the other two. The bunch was under the control of Katusha with Astana, Liquigas and Androni close by. The tactic for Androni was to keep the pace high to put their man Rubiano in the pink jersey as he was sitting at 30 second from the lead, but then Michal Golas (Omega Pharma – Quick-Step) and Ryder Hesjedal (Garmin-Barracuda) had to finish behind him.

3 to go and Omega Pharma – Quick-Step took over the chase and pulled back Pirazzi with 1 kilometre left. Next Herrada was caught by Michele Scarponi (Lampre-ISD) on the front of the bunch; he jumps with Paolo Tiralongo (Astana) on his wheel. The course steepens metres before the line and the faster finisher Tiralongo pushes past Scarponi to collapse as soon as he crosses the line and is left to lie on the road to take a few seconds to recover. 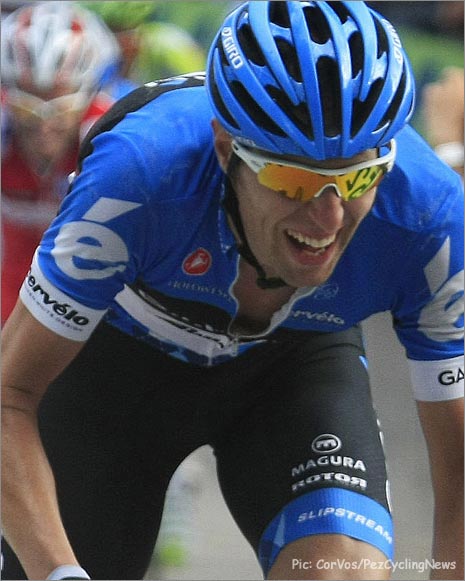 Ryder rode like a champ to 5th place on the stage and leader on gc.

The stage went to Astana man Paolo Tiralongo and the overall to Canadian Ryder Hesjedal of Garmin-Barracuda (a Giro first for both Ryder and Canada!), Tiralongo also moved up to second overall and Michele Scarpone has moved himself closer to the top after his stage 1 TT disappointment.

Keep it PEZ for race reports and Ale and Ed on the roadside.