Race report: What goes up must come down, except on the Colle Molella where what goes up, kind of rolls along the flat once it reaches the summit. A tiny Colnago-CSF Inox climber wins the day with his jockey-sized physique lifting him clear on the last slope as the gaps in the overall classification get smaller and smaller. Here’s how it happened … 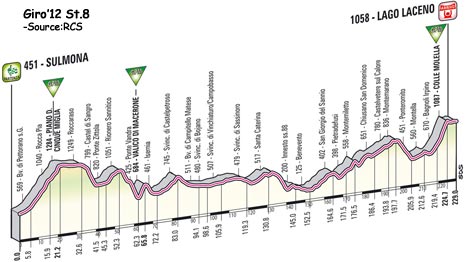 Rolling through half-distance and Amador is virtual leader on the road as the break’s advantage tops eleven minutes. The peloton needs to stir itself into action. Katusha and Liquigas decide that Garmin need a hand and the gap starts to evaporate once they start to work.

Fifty kilometres left and there has been a falling out of sorts in the breakaway. Amador/Marczynski are a duo as Berard and Minguez are shunned, dropped or too tired to go on. 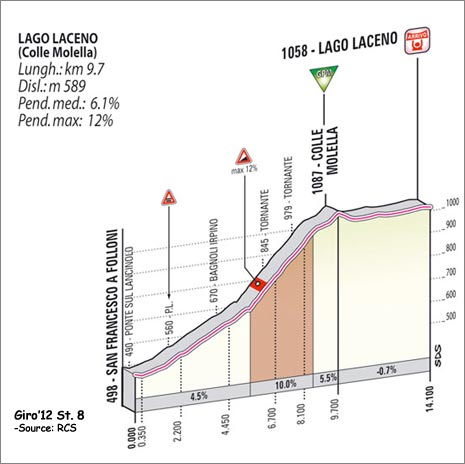 Inside 40 clicks from home: Katusha and Astana line out the peloton. Sky drill the Cavendish gruppo to make sure their man doesn’t get cut.

Robbie Hunter has to make an emergency stop for Garmin as current best young rider Peter Stetina has a puncture. Hunter and then Bauer pickpocket their way through the team cars and pull Stetina back towards safety.

Twenty kilometres left and the gap drops under one minute for Amador and Marcynskzi. Three more kilometres and it’s all over for them, swept away by the multi-colored tidal wave of the Giro peloton.

Astana and Liquigas are now pulling us towards the last climb, the road narrows. Everyone’s getting nervous. NetApp’s Daniel Schorn loses concentration and has to hop/tumble off his mount onto the verge, holding up Sky’s Rigo Uran in the process.

The early slopes of the Colle Molella are steady and fast. Amstel Gold winner Enrico Gasparotto has it in the big ring, battering the gear around. Defending champ Michele Scarponi (Lampre-ISD) is sitting comfortably on the Liquigas train.

Eight clicks left and Sylvester Szymd takes over for Liquigas. It gets steep shortly after … will there be fireworks?

Szymd’s work is affecting the peloton the same way male-pattern baldness impacts a previously thick head of hair. It’s thinning rapidly. Ryder Hesjedal is perilously close to the back of the leading group …

Inside seven kilometres and Domenico Pozzovivo from Colnago takes his chance. He blasts it for one kilometre and has a massive gap. Pink jersey Hesjedal is balefully fixing his gaze on his front wheel, he’s concentrating fiercely to retain his lead.

Now, Benat Intxausti counters from the first group. Five clicks from home, and Pozzovivo has thirty seconds on the Movistar chaser, and forty-five on the peloton.

The Italian resembles a man who irritated a wizard and suffered the physique-shrinking consequences. He’s tiny, but he’s rolling the gear over nicely once the road flattens at the top of the Colle Molella.

Intxausti frantically wrestles with his bike, looks up, can see Pozzovivo in the distance, looks down, out of the saddle, looks up, rolls his shoulders, looks down. He’s not going to catch the flyweight Italian climber. He knows it. 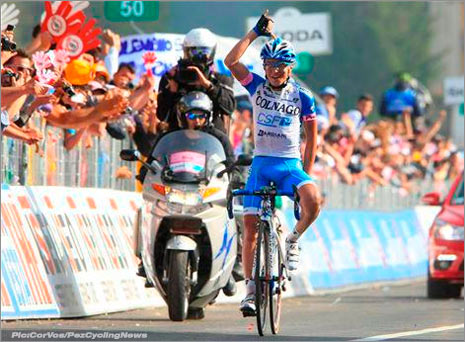 Brilliant ride and a super victory for Pozzovivo who gives a fairly baffling/individual thumb-on-crash hat celebration. Intxausti is in just a handful of seconds ahead of the main group, with Joaquin Rodriguez edging out Thomas De Gendt on the line for third.

Hesjedal hangs on to the pink jersey ahead of a couple of more sprinter-appropriate days on the flat. But the time gaps behind him are smaller. the favorites are bunching up nicely.

Keep it Pez for all the Giro news!