Race Report: Another crazy Giro stage finish with attacks and crashes coming one after the other in the last 10 kilometres. In the end the top fast-men were sat on the road nursing their wounds as Movistar’s second line sprinter; Francisco Ventoso swept to a fine stage win. The 2012 Giro d’Italia never stops giving excitement and today was no different.

Today’s stage from San Giorgio del Saninio to Frosinone (166 kilometres) has an easier profile than the last few days, but it is not flat and has some tricky little lumps near the end, one of which is over 1 kilometre long at 6% and there is also a hair-pin bend on the sprint run-in at 300 metres from the line. The only change from recent days is the weather as at the start there was a little rain and the temperature had dropped to around 15єC.

The race headed off at a fairly high speed on wide roads, but without Dennis Van Winden of Rabobank who didn’t finish yesterday as he was still suffering from his crash last week. The weather may affect some of the riders today, but the reports and photos from the Stelvio shows quite a lot of snow up there, although there is nearly two weeks till it needs to be cleared for stage 20.

The first break of the day went after 13 kilometres and included Martijn Keizer (Vacansoleil-DCM) again, he was joined by Pierre Cazaux (Euskaltel-Euskadi), Brian Bulgac (Lotto-Belisol) and they built up a lead of 4 minutes, but there was still 125 kilometres to go.

100 k’s To Frosinone
The three brave riders had a lead of 3:40 with 110 kilometres still left to race. At the finish the rain had started to fall on the head of our PEZ man Ed Hood, but the good news is that he will be having pizza tonight in Civitavecchia!

The peloton were not too keen on letting them get much time and the gap stuck around the three and a bit minutes. The pink jersey of Ryder Hesjedal (Garmin-Barracuda) could be seen safely in the middle of the bunch chatting with Brett Lancaster of Orica-GreenEdge. The chase was being led by FDJ-BigMat, helped by Orica-GreenEdge with Sky keeping Mark Cavendish close to the front. The last time the Giro finished here, in 2005, the sprint was between the pink jersey; Paolo Bettini and Baden Cooke, Bettini crossed the line first as Cooke hit the barriers. Bettini was demoted to last on the stage, but the stage win went to Luca Mazzanti who had been second.

The bunch was quite happy to leave the group out there, but not giving them too much lee way. With 70 kilometres to go Ryder Hesjedal was having a problem with his jacket as it got stuck in the back wheel of team mate Jack Bauer. They were delayed slightly but not a worry.

60 Kilometres Left
The speed was averaging around 45 kph and the gap was down to 3 minutes as they went through the feed zone in San Cataldo. Yesterday’s winner; Domenico Pozzovivo (Colnago-CSF Inox) had a puncture and as the speed was high four team mates came back to rescue him.

Nothing had changed as the race went under the 50 to go banner, the three escapees were back to 2:33, and up ahead there was an intermediate sprint in Ceprano after 142 kilometres with 24 kilometres still to cover.

At 40 K’s out the lead was down to 1:42 and falling fast as nearly every team had sent a rider to the front for a bit of work. There were still some dark clouds on the horizon, but there was no rain at the finish.

Martijn Keiser had decided that he would try to stay out front on his own and attacked the other two with 32 kilometres to go as the gap was down to 43 seconds. This injected a bit of speed into the lead and at the 30K mark he was 50 seconds up, the other two were caught within the next 4 kilometres.

Through the intermediate sprint and Keiser won it on his own with a lead of 41 seconds from Mark Cavendish (Sky) in front of Thomas de Gendt (Vacansoleil-DCM), Cavendish was 10 points behind Matt Goss (Orica-GreenEdge) in the point’s jersey and was obviously planning on taking it today.

At 20 kilometres Keiser only had 26 seconds and he looked near to the end of his strength, the peloton caught him at 16.8 kilometres and Garmin-Barracuda were on the front for Hesjedal, on his wheel was the Sky lead-out train for Cav. Liquigas-Cannondale, Farnese Vini-Selle Italia and Astana also moved to the front as the unlucky Italian champion Giovanni Visconti of Movistar was having a mechanical problem at the back, needing two team mates to come back for him.

Lotto-Belisol’s Dennis Vanendert jumped away just before the 10 kilometre banner, but was back within 2 kilometres as Garmin were still doing the lead work. Next to go was Matteo Rabottini of Farnese Vini as the undulations started. He blew and Joaquim Rodriguez (Katusha) joined three others and then dropped them to go for it solo for the last 5 kilometres. The chase behind the little Spaniard was lead by Astana and Farnese Vini and he was pulled back on the steepest part of the sharp climb.

The roads were looking decidedly slippy and the bends looked treacherous. Next to go was Hanson, but not for long as GreenEdge were flying on the front of the peloton for Matt Goss. Cavendish had to move forward as he was around 20 back, Pozzato came into the corner and either slipped or took the corner wrong, coming down and bringing all the other sprinters on to the road including Cavendish and Goss.

On the front was Giacomo Nizzolo (RadioShack-Nissan), he looked like he had the win, but Francesco Ventoso (Movistar) was moving fast on his right hand side with Fabio Felline (Androni Giocattoli) with him and they both passed the slowing Nizzolo. Ventoso crossed the line ahead of a handlebar thumping Felline. 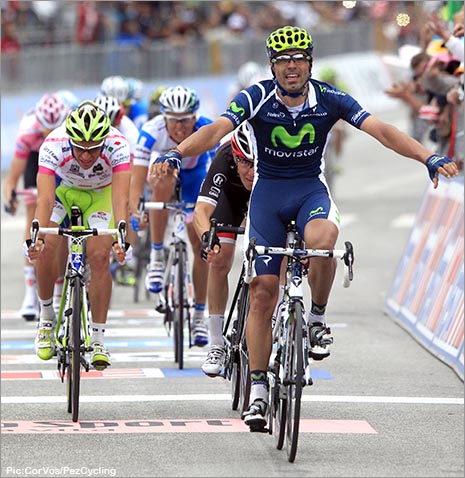 The overall stayed the same, but Joaquim Rodriguez has shown how serious he is in taking the jersey as soon as he can. Give Pozzato his due; he did admit that the crash was his fault. After the stage Ryder Hesjedal said: “The pink jersey means so much to me, it’s due to all the hours/days training.” Is the jersey a problem? “Yes, it means about two hours less recovery time every day!” Another great day on the Giro d’Italia.

Ed is now roadside, so check back later for his day on the Giro.