Race Report: Mark Cavendish was the favourite for today and the World champion didn’t disappoint with a bit of last minute manoeuvring and a strong jump he shot over the line in Herning to add to his tally of Giro d’Italia stage wins. Taylor Phinney kept hold of the Pink jersey, but only after a panic in the last kilometres. Giro excitement as always!

Stage 2 was a 206 kilometre loop out and back from Herning with a climb after 113 kilometres in Osterbjerg, reaching the dizzy height of 48 meters altitude, starting at 2 metres, did the riders notice?

Before the start the experts on RAI Sport 2; Sgarbozza, Savoldelli, Cassani and Martinello all go for Mark Cavendish (Sky) for the win today.

The day started with some sunshine, but the cold wind coming off the sea had most riders with full gloves and arm warmers, with a few in knee warmers. Giro leader; Taylor Phinney rode a pink BMC with a matching helmet, but with normal team shorts.

With 190 kilometres to go, a break of three; Alfredo Balloni (Farnese Vini-Selle Italia), Olivier Kaisen (Lotto-Belisol) and Miguel Rubiano (Androni-Giocattoli) took their chance and built up a lead of over 12 minutes as the race reached the coastal section after being out front for 30 kilometres. At the first intermediate sprint with 140 kilometres to go; Rubiano was first followed by Kaisen and Balloni, Mark Cavendish (Sky) led the peloton through 13 minutes down.

The chase started to get its self together with BMC, Lampre, Rabobank and Sky putting men to the fore bringing the gap down 8 minutes with 100 kilometres left to ride. First crash of the day came in the bunch with Dennis van Winden of Rabobank needing some attention, but all were OK.

The complete Sky team came to the front as Theo Boss (Rabobank) nearly came down on a road island. At the start of mountain climb of Osterbjerg: Kaisen tried an attack, but the other two were on him, over the top Alfredo Balloni was first to take the climber jersey with Miguel Rubiano second and Olivier Kaisen third, the peloton was at 5:05. 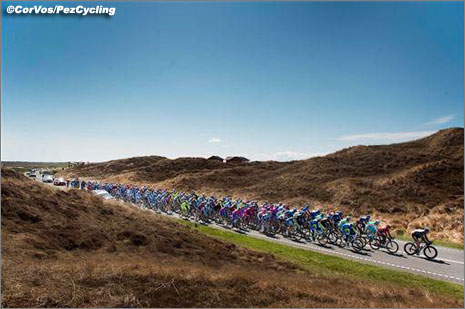 With 80 kilometres remaining the leading trio had less than four and a half minutes as leg warmers and gillet’s were coming off in the peloton and being returned to the team cars. Ten kilometres later Gianni Meersman (Lotto-Belisol) hit a traffic island on a sharp left turn; he was slow to get up, but seemed OK.

The second sprint (for a Bang & Olufsen) went to Kaisen and the gap was down to 3 minutes with Sky still on the front, not chasing hard, but pulling them back bit by bit.

As the clouds started to darken in the distance the Sky team were still piloting Cavendish near to the front as the lead was hovering around the two and a bit mark with 55 kilometres to go to the finish which has a slight rise, but more importantly there is a sharp bend close to the line.

The Last 50 K’s:
The lead was 1:55 for Kaisen, Rubiano and Balloni and it was now only a matter of time before they were back in the fold, still Sky with Liquigas-Cannondale and Lampre-ISD also working. In the bunch there was a touch of wheels at 44 kilometres out, many riders were in trouble, but they all get back (one way or another).

40 kilometres to go and it was all over for the three brave riders, first to attack was Lars Bak (Lotto-Belisol), he powered away and gained a lead of 28 seconds going under the 35 K to go banner. Behind him Sky were still in charge with Orica-GreenEdge joining Liquigas-Cannondale, Katusha and Astana doing a bit of work.

Bak is well known for this kind of ride and as Lotto-Belisol don’t have their sprinter; Andre Greipel here this sort of tactic will be the team’s only choice for stage wins. The World champion’s jersey of Cavendish could be seen four rows from the front in the peloton and the Pink jersey a few places further back. Bak stretched his lead to 45 seconds with 30 kilometres still to ride to the finish in Herning which is a 12 kilometre circuit and finishing on the last few kilometres of yesterdays time trial. 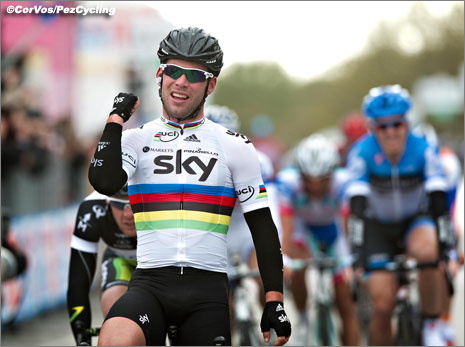 25 to go and the gap was still 45 seconds for Lars Bak as all the teams were moving forward for the expected sprint. Local boy, Bak, was riding strongly and was nearly the virtual overall leader, but as he entered the last 20 kilometres he was back to 23 seconds advantage.

Bak was back into the bunch at 17.3 K’s out and as usual Sky, Liquigas-Cannondale and Astana had the helm, with Katusha, Orca-GreenEdge and Omega Pharma – Quick-Step close behind them. The BMC team were protecting Taylor Phinney, but it was unsure whether they will try to take Thor Hushovd to the line.

Through the finish line for one 12.6 kilometre lap of Herning and Sky had started their lead-out work with Orca-GreenEdge. Phinney had a bike problem with 8 kilometres to go and his team were nowhere to be seen, it looked like his chain had come off and he had possibly fallen. He held his car for a little until Danilo Wyss came back to help him get amongst the cars. Two more team mates joined to pace him onto the peloton and then move him forward…panic over! 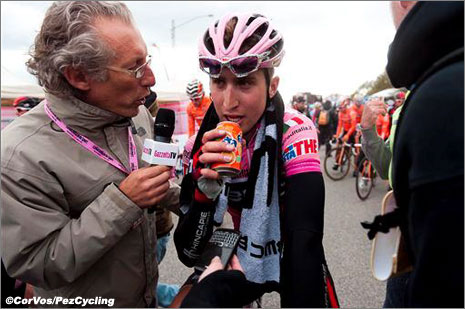 After that excitement, it was eyes down for the sprint. Pozatto (Farnese Vini-Selle Italia) hit the front for no apparent reason as his team where nowhere to be seen. Garmin-Barracuda and Sky on the front until GreenEdge take it in the last kilometre as there was a crash coming out of the tight bend. Thor Hushovd (BMC), Mark Cavendish (Sky), Matt Goss (Orca-GreenEdge) and Geoffrey Soupe (Ag2r-LaMondiale) hit the front as there was carnage behind.

Hushovd was moving fast as Cavendish was trapped behind Tyler Farrar, the little Manxman moved to the centre, changed up a gear and flew away from the others for yet another stage win. 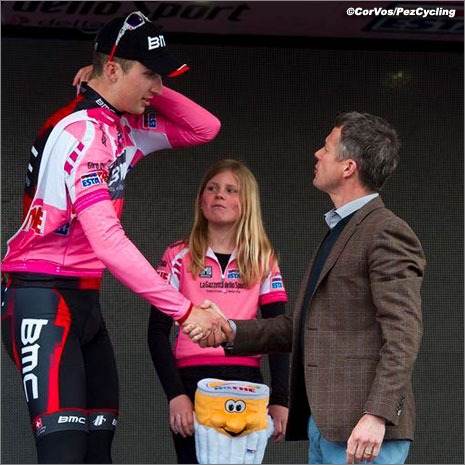 Good news for Taylor Phinney and BMC as he finished with the bunch to stay in Pink.

Stay PEZ for all the race action and Gordan in Denmark.

Giro di PEZ ’12: By The Harbour On The Coast