Race Report: Today’s stage 3 was similar to yesterday until the last 200 metres, then there were bodies all over the finish straight including the pink jersey Phinney and red jersey of Cavendish. “All is fair in sprinting” but today Roberto Ferrari showed the opposite with a frightening sideways move. Another fun packed day on the Giro d’Italia!

Today’s stage 3 profile is much the same as yesterday’s, maybe a little more lumpy, but basically a flat loop out and back from Horsens with a 4th Cat climb in the middle. The Ejer Bavenehoj comes after 103 kilometres and is 159 metres high, but they start the climb from Edrup at 47 metres, so we are not talking Alps here.

The course headed towards the coast from Horsens on a 100 kilometre loop and then another loop of 45 kilometres, followed by three 15 kilometre laps of the town, the wind was not as strong as Sunday.

It was a sad start to today’s stage with a minutes silence for Wouter Weylandt who died on stage 3 last year, it was actually on the 9th of May, but it’s the team time trial on Wednesday and today all the riders will be together. Also the mayor, Jan Trojborg, of the start and finish town; Horsens died suddenly at the weekend, but his family wanted the stage to carry on in his memory as he had worked hard to bring the race to his town. 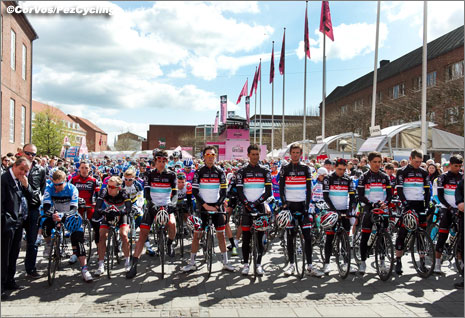 A minute of silence was observed to honor Wouter Weylandt.

Ramus Navardauskas of Garmin-Barracuda was the best placed of the break, he held 1st place on Saturday’s time trial for a long time and was in 6th place at the start of the stage this morning. Alfredo Balloni (Farnese Vini-Selle Italia) was also in the stage 2 long escape and will be defending the mountains jersey he took on yesterday. Mark Cavendish (Sky) was holding the points red jersey and Taylor Phinney (BMC) hold the pink overall and the white young rider’s jerseys, with his 27 second lead he should be safe to still be in the pink when the race reaches Italy.

100 K’s To Go
The gap between the six leaders and the peloton had been reduced slightly by the BMC team to just less than 3 minutes, but none of the sprinters team had shown any interest…yet! 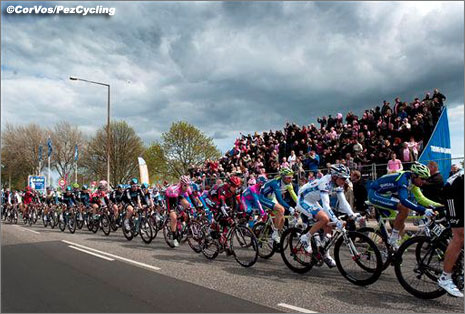 Sky, BMC and FDJ-BigMat were in charge of the peloton as the leaders crossed the climb with Balloni in the mountains jersey taking the points as the lead pulled out a little to 3:50.

50 kilometres to go and Sky had brought the gap down to 2:10, Lampre-ISD were worried about their top men bringing Scarponi and Cunego nearer the front, he can’t afford to loose any more time.

BMC and Orica-GreenEdge started to help the sky train as the race came into Horsens for the start of the first of the three 14.6 kilometre laps, the lead was down to 1:35 and it was only a matter of time until they were caught. The finish is simpler than yesterday with a 5 kilometre straight section and the last bend 2 kilometres from the line and a 1000 metre finishing straight on a wide road. 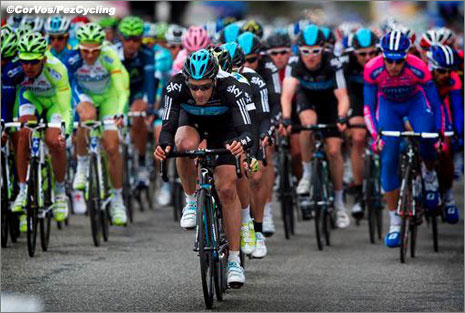 Team Sky had some difficulty controlling the race in the finale today.

36 kilometres to go and the lead was less than 1 minute, there were still more Sky jerseys than any others, but FDJ-BigMat, BMC and Orica-GreenEdge also had a man amongst the pace setters. The leaders were not slowing, but Mads Christensen (Saxo Bank) thought it was a good time to leave them and see if he can go all the way on his own. Through the finish for the start of the second lap with 28.8 kilometres to go and Christensen had 34 seconds for his suicide attempt as the others in the break were caught.

20 K’s left and Mads Christensen had been pulled back on one of the straight sections on the back of the circuit, Sky, Lampre-ISD with RadioShack-Nissan were making the tempo when Lars Bak (Lotto-Belisol) attacked, much like he did yesterday coming into Herning. It didn’t work this time either and he was back in the fold after taking the bell for the last lap.

Last Lap!
14.6 kilometres to the finish line, Liquigas-Cannondale and Lampre-ISD had taken the helm of the peloton from the Sky team, but all the teams were trying to move forward for different reasons; sprinting or just to stay out of trouble. 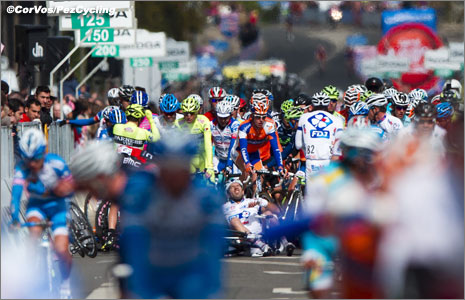 Liquigas and Saxo Bank led the bunch through the 10 K’s to go banner and for the first time the NetApp team took up the running, BMC were taking care of Taylor Phinney hoping he doesn’t have the same mishap as he did on the run-in yesterday. Orica-GreenEdge pushed its way onto the front as the bunch was starting to get edgy (sorry).

5 kilometres out and Astana hit the front for Enrico Gasarotto, but Sky put four riders on the front for Mark Cavendish on the right side of the road as on the left Rabobank had another train. Saxo Bank also wanted the front of the race. Sky ran out of men on the front, but Cavendish was on the wheel of Demare (FDJ-BigMat), but there was a touch of wheels as Roberto Ferrari (Androni-Giocattoli) switched across the road taking Cavendish out, causing him to hit the road bringing down a load of other riders including the pink jersey of Taylor Phinney. 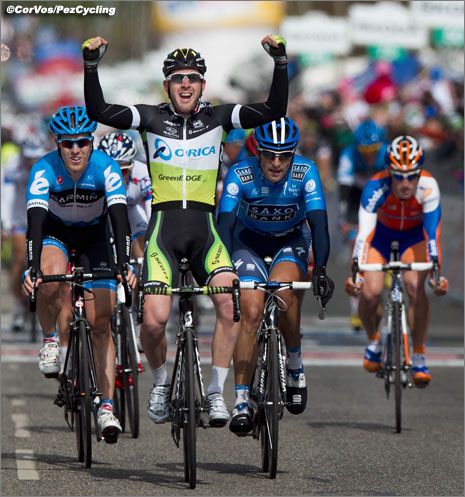 Orica-GreenEdge were in control launching Matt Goss towards the line without any problems, on his wheel was J.J. Haedo (Saxo Bank) and Tyler Farrar (Garmin-Barracuda). The Australian was flying and no one could have passed him at his finishing speed.

Taylor Phinney was listed as still being the overall leader, but he looked to be in great pain from his ankle. The pink jersey was presented to a young boy as Phinney was receiving medical attention. In the end the American managed to walk to the finish tent and to receive the pink jersey.

Mark Cavendish had to carry his bike to the finish on the shoulder of his tattered red jersey, but he will be OK to start on Wednesday. 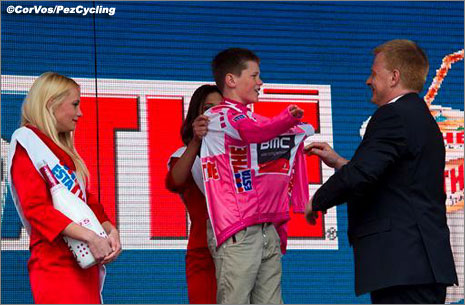 A young Danish fan was a happy stand-in for Taylor Phinney, who was taken to the hospital following his crash in the finale.

Goss took over the red point’s jersey from Cavendish. Goss was very pleased with his win, but was unaware of exactly what had happened, but did know there had been “carnage” behind him.

Stay PEZ for Gordan’s Roadside report and all the race action on Wednesday as the race starts again in Italy.