Race Report: It was an exhausted but happy Mark Cavendish who greeted his girlfriend Peta Todd and baby in the seaside resort of Fano with a stage win. Sky looked as good as the old HTC lead-out train to jettison its rocket over the line. More bad luck for Taylor Phinney as he crashed again to finish well down. Another great day in Italy!

Now that the Giro is back in Italy the temperature is more like we expect, nice and warm around 25єC as the stage heads to the Adriatic coast. Today’s stage 5 goes from Modena to Fano and is mostly a flat 209 kilometres, there is a section of small climbs for about 25 kilometres starting at the 170 kilometre mark which includes the 4th Cat Gabicce Monte at only 109 metres altitude. The road is flat for the last 13 kilometres in to Fano.

The talk before the stage was that Garmin-Barracuda’s sprinter Tyler Farrar could take the pink jersey from team mate Ramunas Navardauskas, if he wins or comes second in Fano he will be in pink tonight. The other talk was about the apology from Roberto Ferrari to Mark Cavendish (and others). Cav didn’t seem too interested in talking about it, although he did say that Savio (Androni manager) had spoken to him. Don’t think Ferrari will be on the Cavendish Christmas card list this year!

The Early Action
A group of four had a gap of 6 minutes with 150 kilometres to Fano, they were; Alessandro de Marchi (Androni-Giocattoli), Pier Paolo de Negri (Farnese Vini-Selle Italia) and Olivier Kaisen & Brian Bulgac (Lotto-Belisol). Of the four Brian Bulgac was the highest placed at 1:39 behind the pink jersey of Ramunas Navardauskas. After the finish of yesterday’s stage Navardauskas said “I was a bit nervous during the warm-up because it had technical corners, climbing in the middle and for nine guys to do it all together was not easy. The team did a perfect ride. I think I did OK.”

Cav showed off for his brand new daughter by winning the stage.

With 100 kilometres to the finish the peloton where coming through the feed zone 5:50 behind the leaders without much impetus and no organised chase. The speed started to pick-up with 85 kilometres to go, the race had been averaging around 37 kph, but it lifted to 45 kph and the gap started to shrink and by the 75 kilometre out mark the gap was 5:36.

60 Kilometres To Go
As the race dropped down to the coastal town of Rimini none of the riders behind seemed to concerned about the break away, but other teams were coming to the front to help out the Garmin-Barracuda riders who were doing the lion’s share of the chase work. The long Adriatic beach stretched down the coast as the peloton also stretched out a bit with a little injection of speed as they entered Riccione and the last 50 kilometres as the gap came under 5 minutes.

Through the intermediate sprint after 160 kilometres it was Pier Paolo de Negri of Farnese Vini-Selle Italia who jumped away for the points and the bunch were 3:25 behind the four escapees.

At the start of the small climbs 40 kilometres to Fano, the bunch started to get nervous. [The tv showed Saxo’s Haedo chatting with the rider next to him, his head fully turned sideways, when he clipped wheels with the ride in front and went down causing a small crash with Taylor Phinney (again) and a few others -ed.] Up front the four became three as Kaisen (Lotto-Belisol) was dropped as Paolo de Negri took the GPM from Bulgac and the peloton at 1:15.

After the climb Alessandro de Marchi (Androni-Giocattoli) headed off on his own from the leaders, Liquigas-Cannondale came to the front of the peloton to drive it a little, but Phinney was struggling off the back and also Tyler Farrar (Garmin-Barracuda) and Thor Hushovd (BMC) were in trouble on the fast undulations.

Liquigas were in control going back down to the coast and with 25K’s left; Alessandro de Marchi only had 45 seconds in hand. The long decent allowed some of the dropped riders to regain the bunch, although the pace was high stopping any attacks.

20 To Go!
Liquigas-Cannondale, Katusha and Astana had all moved to the front and at 20 kilometres out de Marchi was caught. The group of Farrar and Hushovd were not making their way back to the bunch leaving the door open for one of the other sprinter…like Mark Cavendish, although it was difficult to see if he was still there.

Astana were the main team on the front as the race came to the 12 kilometres to go mark. This started the sprinters teams to work, Orica-GreenEgde, Sky, FDJ-BigMat and Movistar had the helm which put the speed even higher.

7 K’s and the Sky lead-out train got into gear along the sea front, six Sky riders with Cavendish seventh in line, although the Rabobank and Orica-GreenEgde trains were starting to infiltrate the Sky line.

Cavendish had Daniele Bennati (RadioShack) and Robert Hunter (Garmin-Barracuda) on his wheel. Sky looked in total control today and brought Cavendish perfectly to the finish, with his speed the others were lucky just to hold his wheel and had no chance of coming past him. 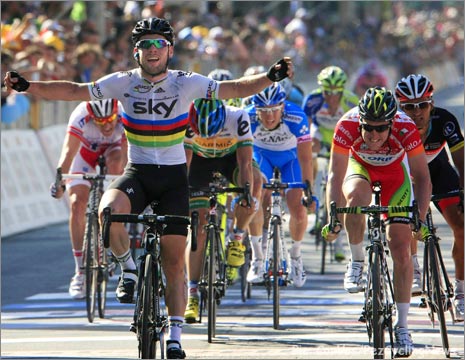 Bennati, Goss and Hunter where the closest, but stood no chance against the flying Manxman. Ramunas Navardauskas (Garmin-Barracuda) finished in the peloton and held onto the pink jersey. Taylor Phinney (BMC) came in 12 minutes later as Cavendish took his baby on to the podium for the presentation.

Keep it PEZ for the Giro d’Italia, race reports and road-side.