Race Report: The Mitchelton-Scott team set the volcano of Etna ablaze as it fired Esteban Chaves and Simon Yates up its steep slopes on Giro stage 6 for stage win and overall lead. Ed Hood takes us through the punch-by-punch domination by the men from the team ‘Down Under’. 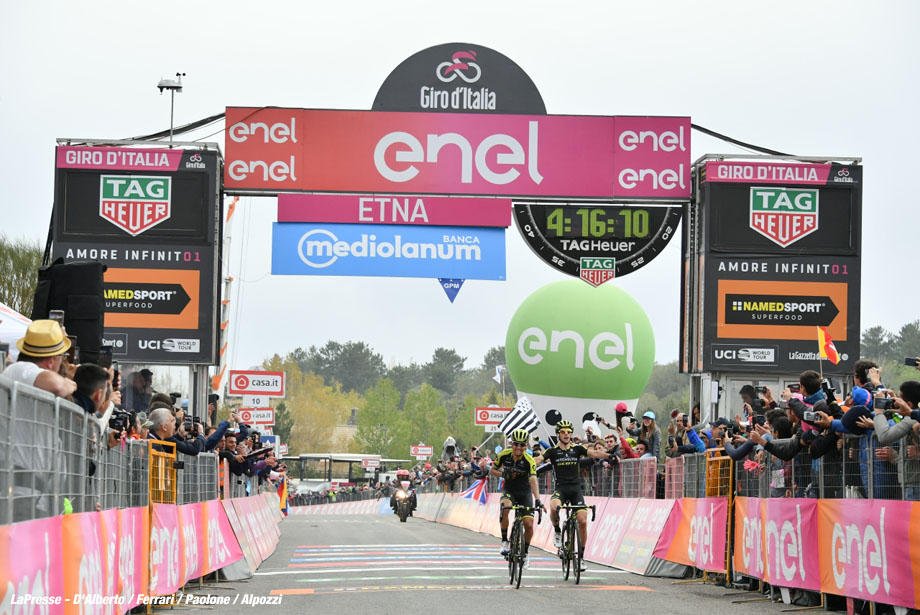 Bad day on the black volcanic rock of Etna for Rohan Dennis, Fabio Aru, Louis Meintjes and Chris Froome. But a dream day in the steam cloud for Mitchelton-Scott from diminutive duo Esteban Chaves and Simon Yates – with the former taking the stage after spending much of the day ‘up the road’ and the Brit taking pink. Surely the team’s best ever stage race day? 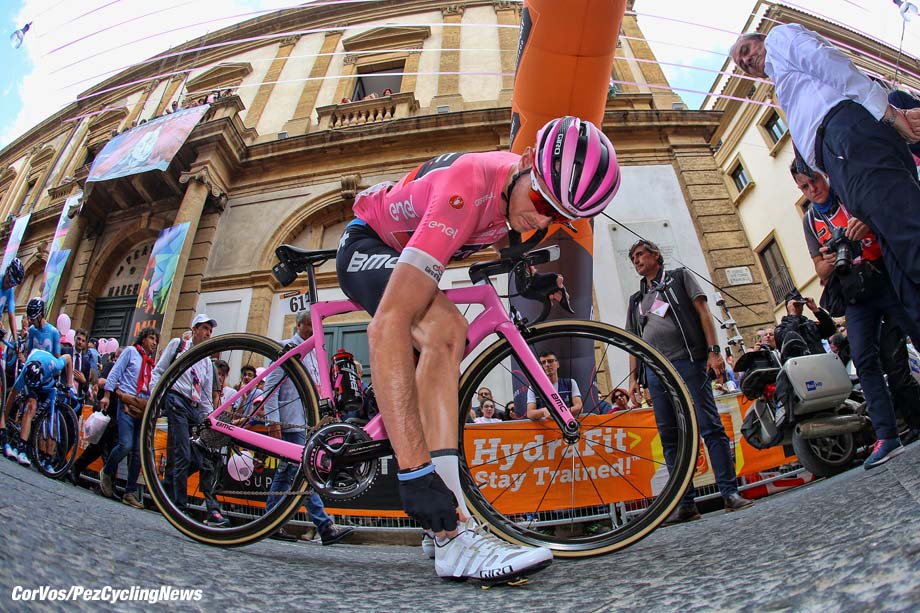 A hard day ahead for the pink jersey

This will be the first summit finish. Like the previous two days, the stage has an undulating profile and features an endless series of bends over the first 120km. Past Paternò, the route takes its first-ever pass up the long closing climb that leads all the way to the Etna Astrophysical Observatory. 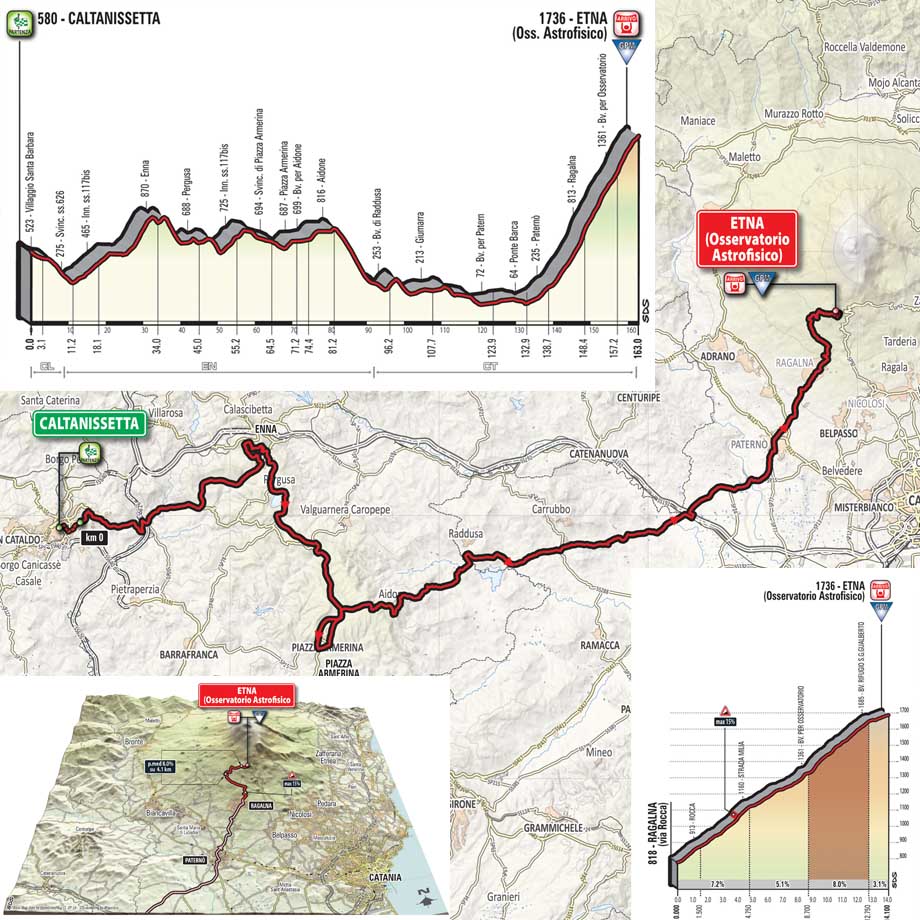 Final kilometers
The final climb (15km) begins in Ragalna. Over the first 10km, the road is relatively wide, yet steep at points (max. gradient 16%). The roadway narrows 5.5km before the finish, as the route follows short periods in the woods and on lava fields. Red flag: the route climbs and bends slightly until the final 150m, where the road stretches out, with gradients around 6% (the finish line sits on a 6m-wide asphalt road). 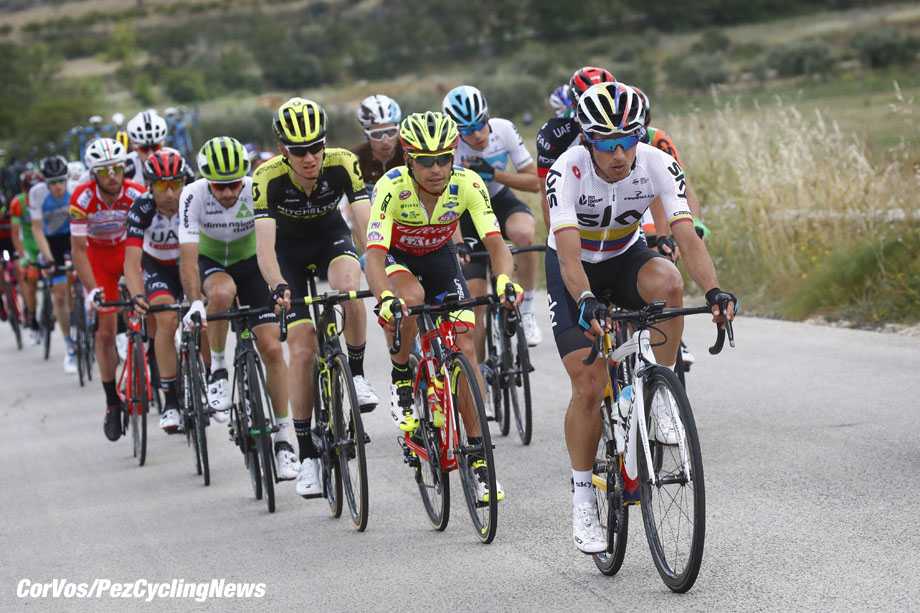 BMC were having none of it though, they want to keep that jersey almost as badly as they need a new sponsor and tapped out a tough tempo. With a 46kph average for the first couple of hours and a monster climb to come there’ll be some tired boys tonight. 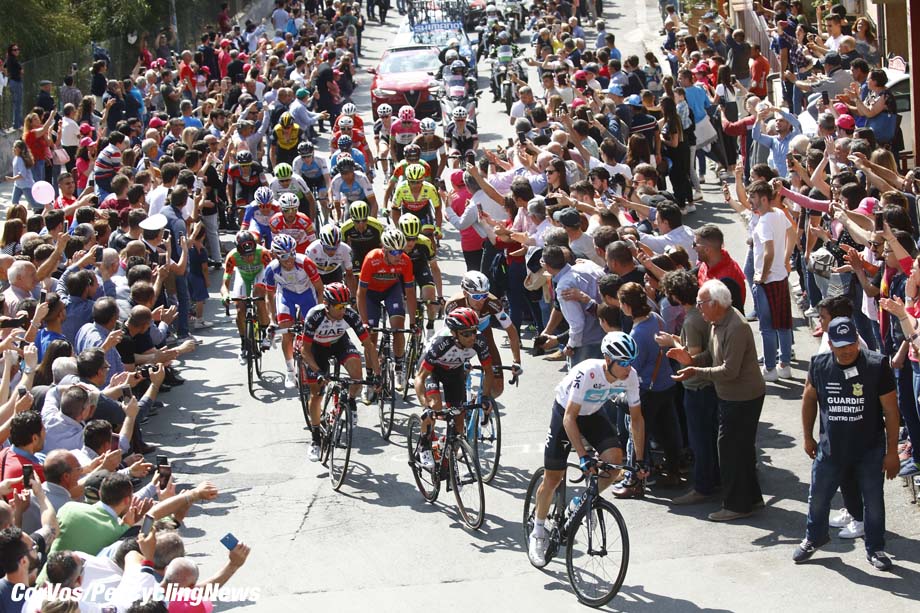 With 50K to go, Astana came up to give BMC a helping hand. A day for Lopez after a couple of spills thus far? Despite the unwieldy size of the break they’re working sweetly enough into the last hour – but the seconds are melting away. Froome chases back – a puncture perhaps?

Astana have turned up the wick as the gap gets closer to two rather than three minutes with 25 miles to go; it’s up hill all the way from here – expect the rear doors to open soon. Yates has Chaves up front, that looks suspicious. . . And Big Tom has two – as does Pinot and Mr. Froome; we just hope that volcanic steam up there on Etna doesn’t cause problems with the Brit’s asthma. 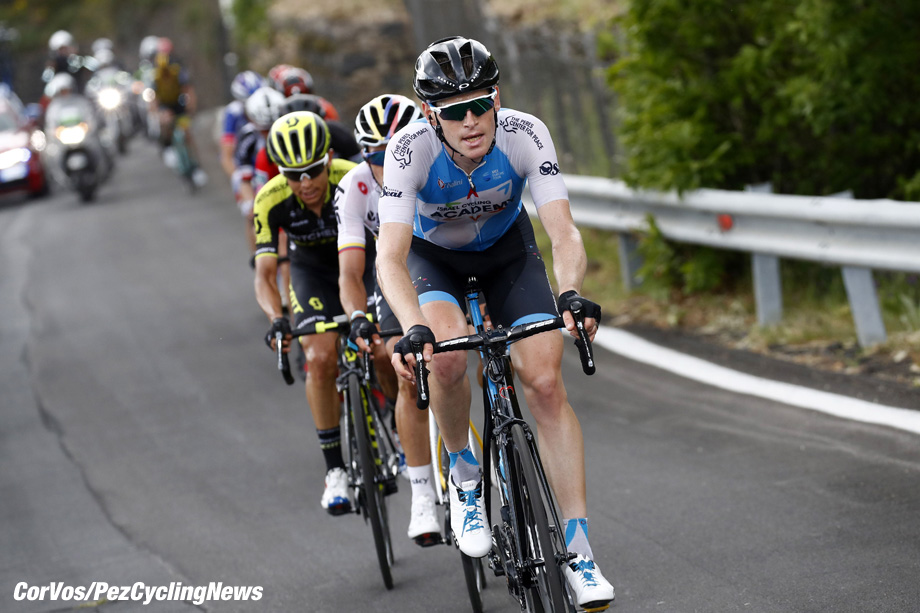 The breakaways are riding hard now, it’ll splinter soon, for sure. Big crowds through Paterno as they run into the base of the volcano with Katusha-Alpecin showing face at the head of the peloton; Goncalves must feel good. Astana still on point, BMC have gone into hiding as the gap drops under two minutes.

There’s no messing about in the break now, inside 25K, maybe some can survive? And the back door has opened as the peloton stretches under the impetus of the men in baby blue, who are drilling it. The chess board is coming to life as Mitchelton mingle with Astana. 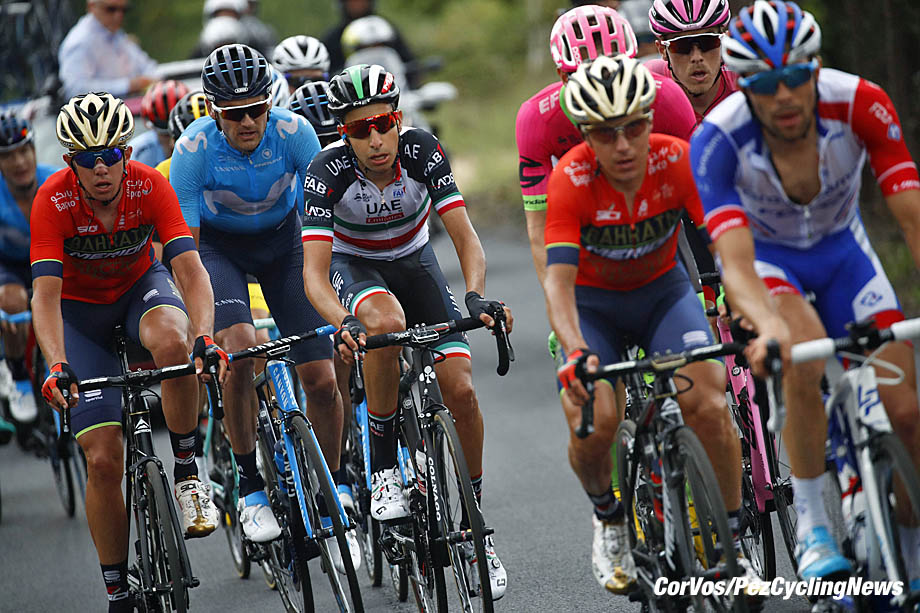 There’s the 20K to go banner and there’s definitely belief in the break – but Astana and Mitchelton are deadly serious with the gap down to 90 seconds. Visconti has been on the deck; time to ride in, tempo , Elia Viviani will be in the same gruppo. Haig drives the break for Chaves? or is it for Yates?

Astana keep the peloton hurt on as they pass 15K to go – the ‘official’ start of the climb. Up front, Haig pops, Gesink drives as De Marchi attacks for BMC; 28 are become half-a-dozen. Still Astana tear the peloton apart. Henao and Chavez meanwhile bridge to De Marchi and Hermans, who covered De Marchi. Sanchez leads the Astana charge now. 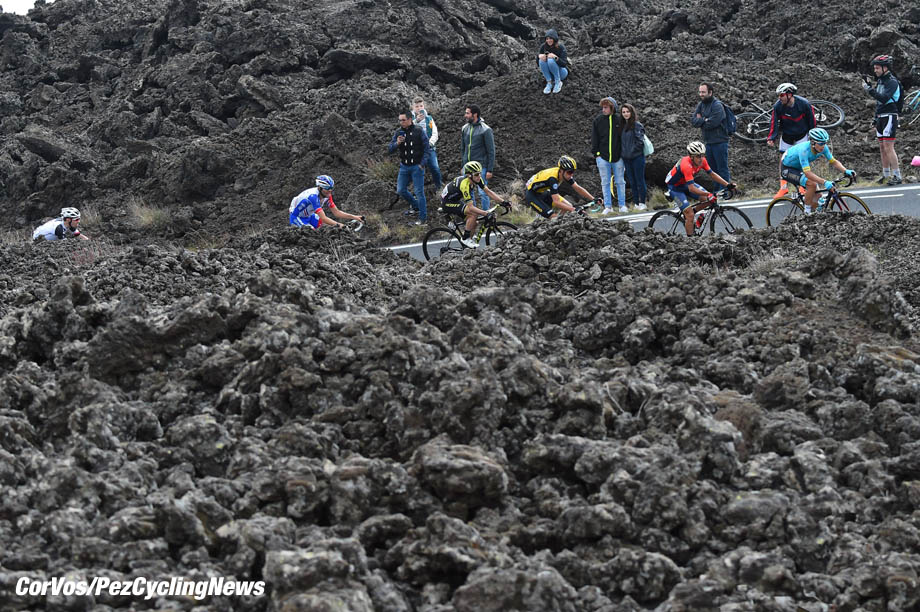 Meintjes has gone; still 10K to go – oops. Riding through the lava flows now with Dennis still there in a much diminished Astana powered group as are Froome, Yates, Dumoulin. Up front we have Ciconne solo with Henao and Chaves in pursuit – they catch him, three now in the lead but Omen and Hermans come back to them.

Seven K and just inside a minute, it’s possible. . . Ciccone launches again with 6.5 K to go, the Colombians look at each other but the slight Italian isn’t getting a real gap. Still Sanchez grinds out a horrible rhythm – and Ciccone is now making it stick. Once he’s in the trees they’ll loose sight of him. . .

Chaves gets up to Ciconne, straight past him and looking good. Chaves leads solo as Dennis hurts, further down the volcano. Dumoulin and Pozzovivo drive the group as Froome and Dennis shows signs of real distress. 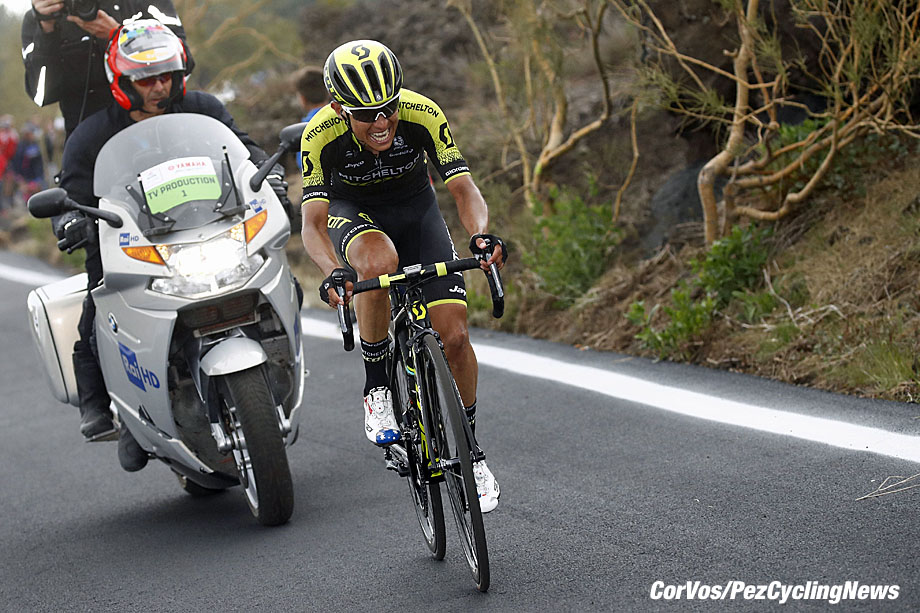 Chaves gurns, but Lopez chases now as Pozzovivo, Bennett, Yates and Pinot, take it up. No Dennis, Aru or Froome as Dumoulin grinds his way up to Pozzovivo & Co. Lopez takes the initiative; his compatriot, Chaves has 23 seconds on him. But Yates dumps nitro and gets the gap in seconds. 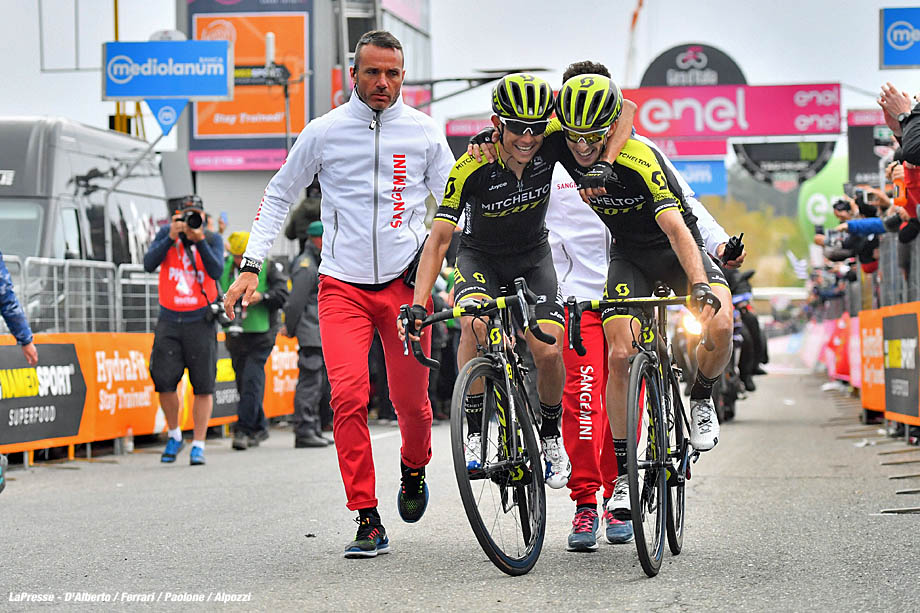 Red kite
Yates zooms up to Chaves – the two winos are side by side as they ride the finish straight. Yates gives it to Chaves – the stage and the leader’s jersey. It doesn’t get much better. Pinot third. But as we all know; ‘a Grand Tour is won in the third week. . .’ 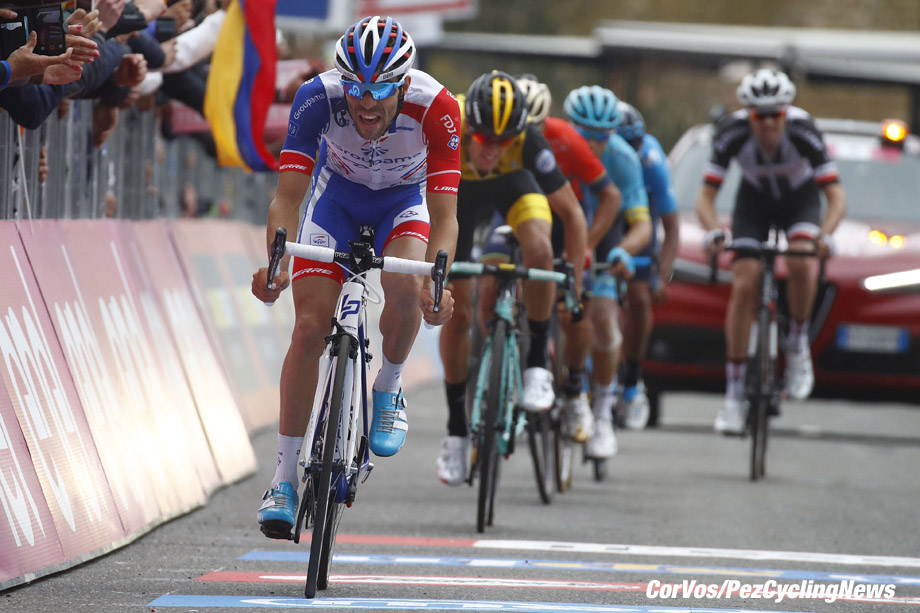 Stage winner Esteban Chaves (Mitchelton-Scott): “It’s unbelievable. I needed this for my comeback to the Giro after one year of absence. It was a really hard stage here at the end. I firstly thank Jack Haig for pulling so much in the breakaway. This 1-2 with Yates is like a dream.” 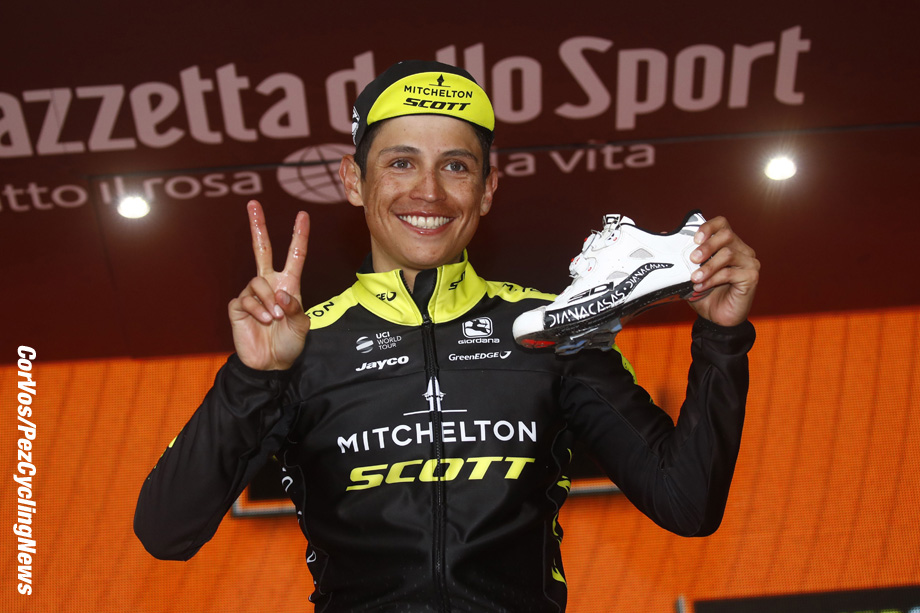 Overall leader, Simon Yates (Mitchelton-Scott): “Our tactic today isn’t what our sport director told us to do this morning. It was a crazy day with a lot of attacks going at the beginning. As Esteban was at the front with a pretty big group, it made me sit back. I could save some energy. It worked out perfectly. I felt good so I took my chance to ride across. Esteban had been out all day so he deserved the win. I knew I was taking the Maglia Rosa, which pleases me a lot.” 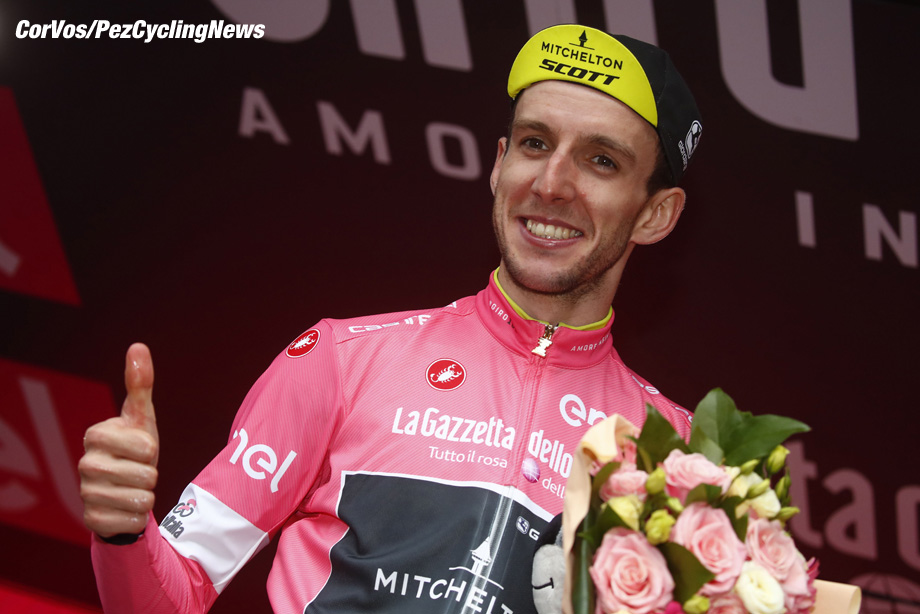