Race Report: Simon Yates (Mitchelton-Scott) took another Giro stage win after a brutal, but short, stage to Osimo. The steep finale brought the GC contenders to the fore and Chris Froome (Sky) was once again found out. The big question is: Does Yates have enough time in hand over Tom Dumoulin (Sunweb). 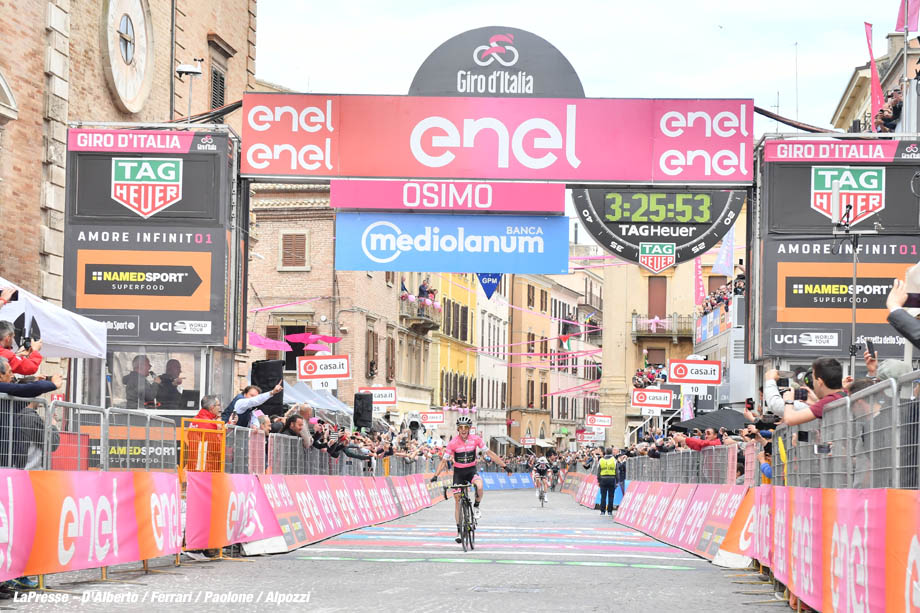 A break of five went after a hectic and speedy start. Their lead went quickly out over the three minute mark and it looked like it would be a day for the breakaway but the peloton started chasing and chasing hard. The race never slowed down and although the break, and especially Luis Leon Sanchez, fought hard it was all back together with 5km left to go. On the first steep finishing climb Zdenek Stybar and Tim Wellens went clear, they looked likely winners but Mitchelton-Scott chased and it was back together for a Simon Yates attack. The Brit quickly gained a gap and despite a hard chase by Tom Dumoulin, he was never caught. Davide Formolo came in to round off the podium. In the GC battle, Yates gained some ground on everyone but especially Froome and Aru who now lie more than 3 minutes back. It certainly looks like both riders have had a pin stuck in their GC ambitions. 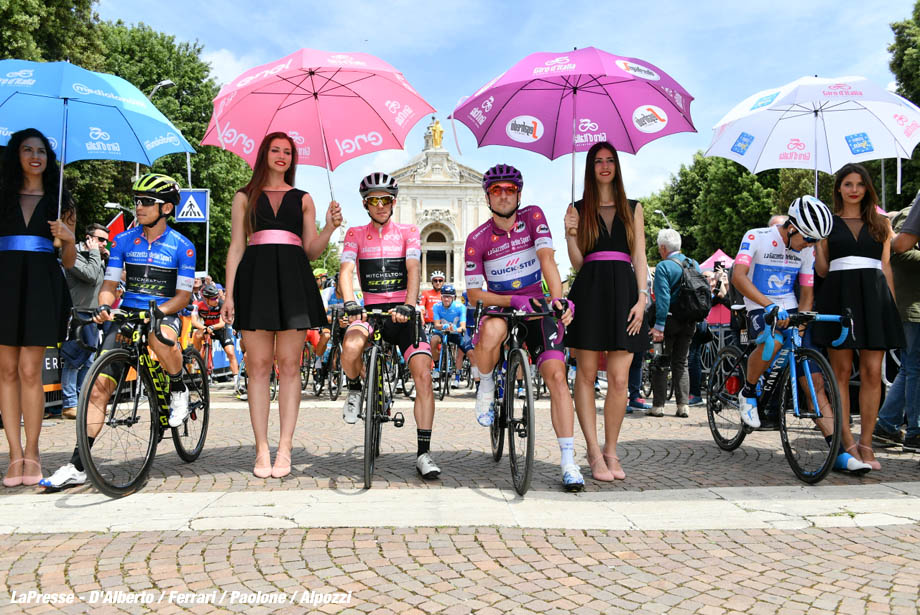 Route
After yesterday’s monster slog up the middle of Italy, there’s something a little more relaxing for the riders today as they head east towards the coast. Relaxing only in terms of distance, it’s 156km but the finale is significantly harder than yesterday. This stage is cut from the same cloth as the Tirreno Adriatico, rolling, with a wall like finish into the town of Osimo. The high point is crossed at 42km when the riders summit the 814m Passo Cornello and there’s then a long downhill run to the second categorized climb of the day, the 674m Valico di Pietra Rossa. Anybody hoping for another long downhill run to the finish will be very disappointed, instead of that it’s a very lumpy 60km stretch to the finish. The initial section is downhill but with about 12km left to go it’s almost all uphill to the finish. It’s nothing too hard until 5km to go and a pavé ramp with sections up to 16%. 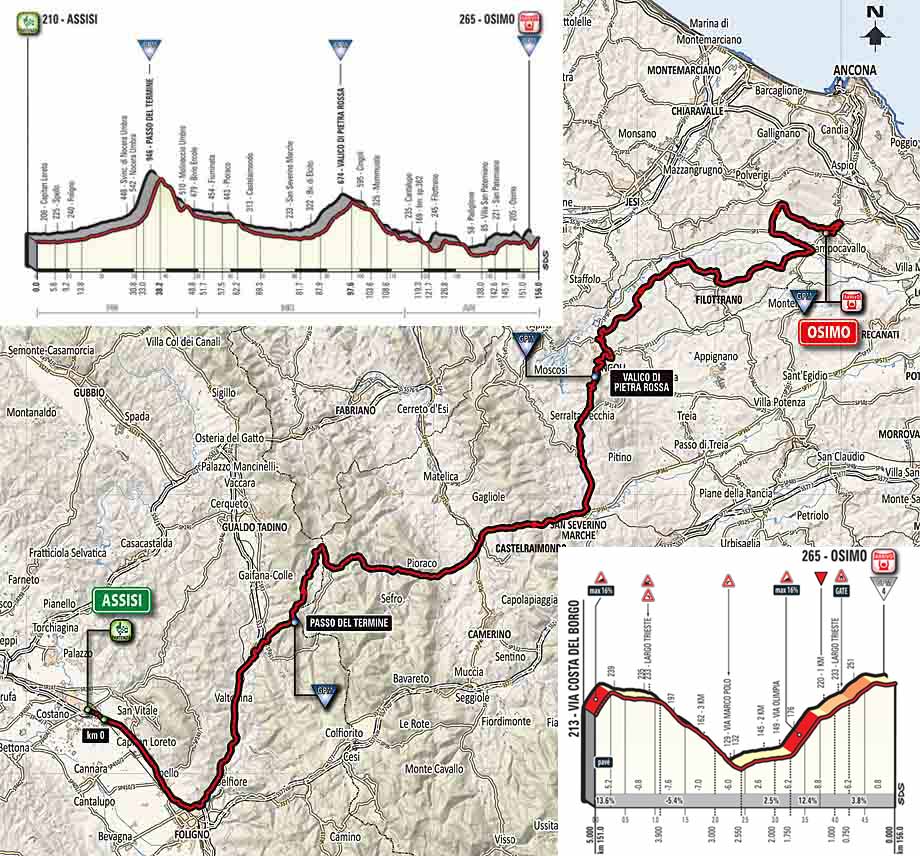 There’s a brief breather after that but we start climbing again with 2.5km to go, gradually at first before 750m at 12.4% with sections at 16%. The climb flattens out with 1km left to go, and although the main difficulties have now passed, there’s still constant climbing until just a couple of hundred meters to go when the road flattens out for the finish. It’s an appealing stage if you just look at the distance, but the profile tells a very different story. 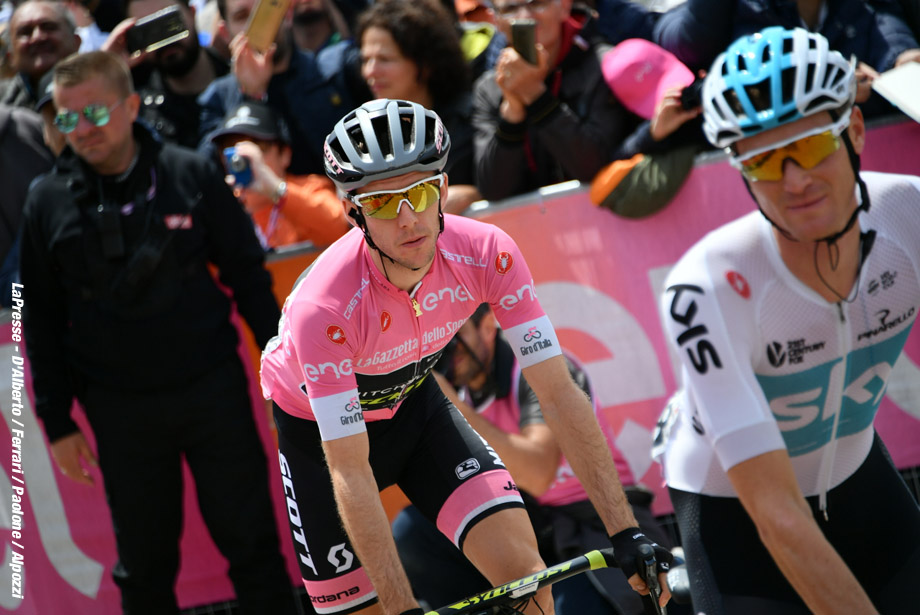 High Powered Break
The stage looked very well suited to a break and it wasn’t a surprise that everybody wanted to be involved. That led to some high-powered racing as break after break after break tried to go clear into the first climb. The pace was high and with the first climb coming up, it was in most people’s interest to let a break go to prevent the race blowing apart on the climb. As the road pitched up we finally had our break of the day as Alessandro De Marchi (BMC) and Luis Leon Sanchez (Astana) went clear. 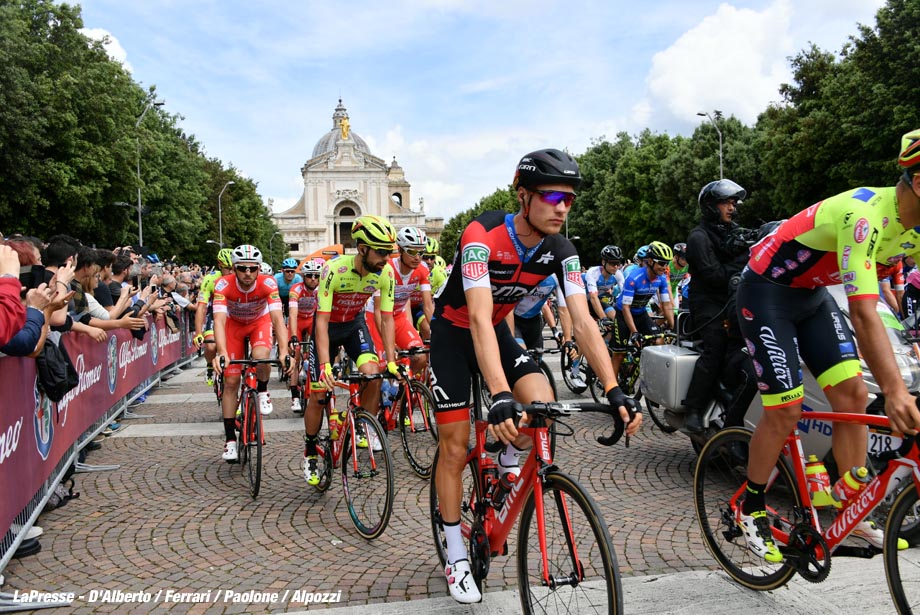 This wasn’t good news for the small Italian teams and with some harsh words from the team car ringing in their ears, it was race on again. Fausto Masanda (Androni-Giocattoli Sidermec) was the first the bridge across, the Italian almost grabbed a stage win on Sunday to Gran Sasso. Mirco Maestri (Bardiani-CSF) was the next to make the junction after a very hard chase on, he was very quickly followed by Alex Turrin (Willier Triestina) who had also put the hard effort in and we had five leading riders. Mitchelton-Scott were working hard, despite the lack of GC contenders in the main group, and the gap was pegged at 3:30. Inside the final 100km and the gap was holding steady as Lotto-FixAll joined the chase in support of their team leader, Tim Wellens. 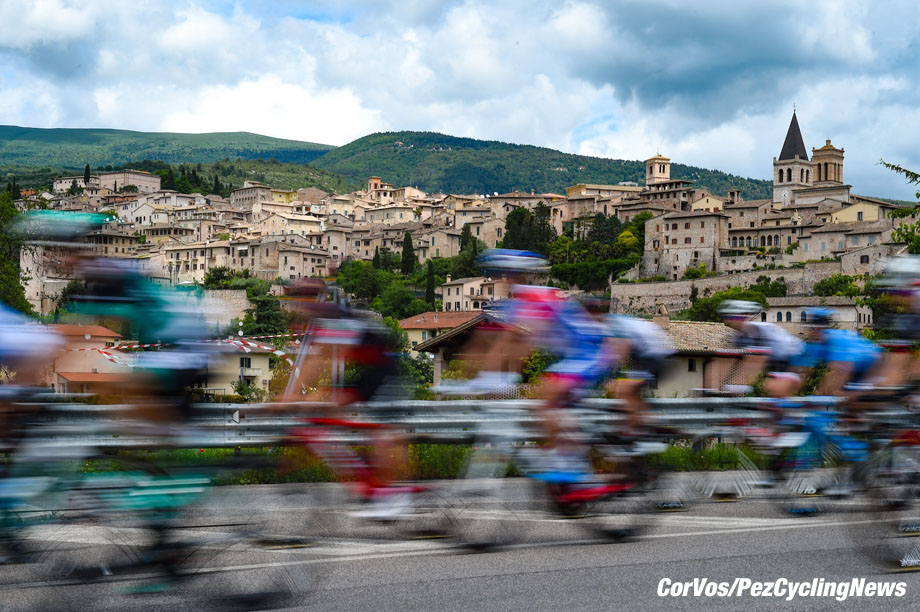 If the start town of Assisi sounds familiar, it’s probably due to St Francis of Assisi, the Catholic friar who was born, and died here. The finish of Osimo might not have the same prestige, but it is the home of Andrea Cionna, who ran the fastest marathon by a totally blind man, setting a time of 2:31.59. 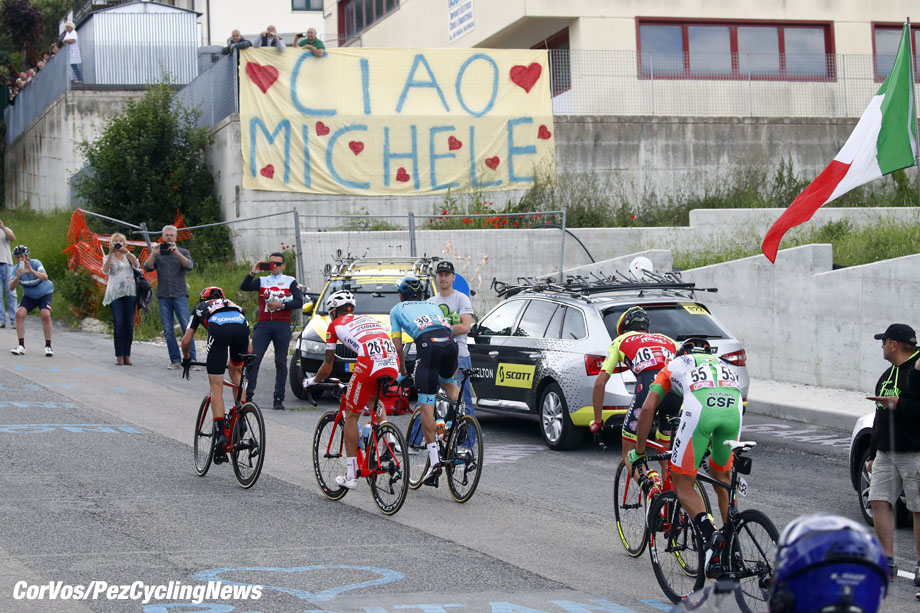 Lotto All In
The work of the Lotto team was starting to put pressure on the break and the gap was now just over two minutes as the race hit the feedzone. The break was still fighting and as they started the second climb the gap was going out again towards the three minute mark. At the summit of the climb, the gap was three minutes but the hardest riding was still ahead of the race as the rolling terrain loomed. 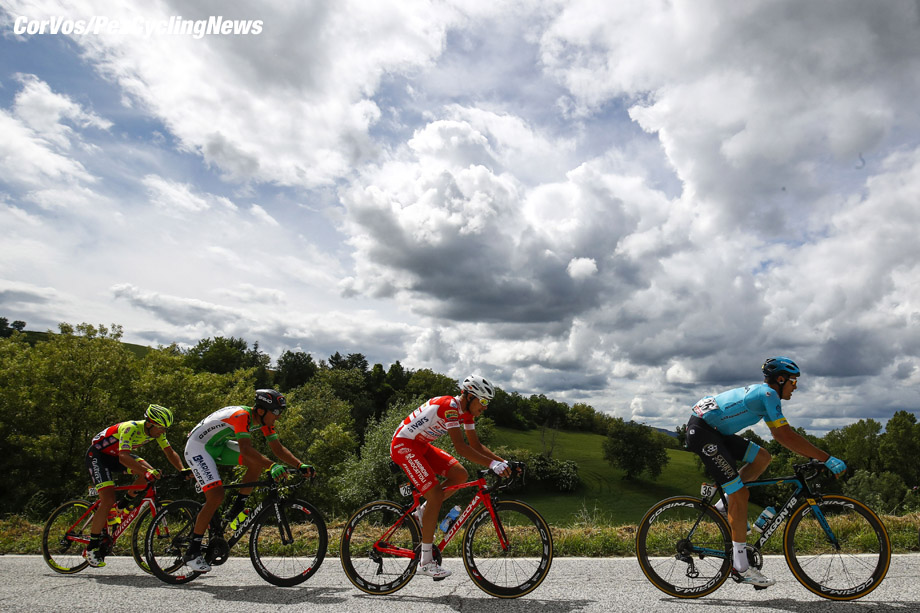 The race was whizzing by, it felt like the break had only just been formed but there were now just 44.5km left to ride and the gap was quickly heading towards two minutes. The break were all looking at Luis Leon Sanchez as he continued to do the largest share of the pace making work. He was fighting a growing number of teams though and the gap was creeping ever closer to the two minute mark. There were many uncategorized climbs hidden in the profile and on the ramp up to the summit of the climb at Filottrano Sanchez was starting to hurt the rest of the break. As the climb continued it was game over for Turrin and Maestri, who had previously had the hardest chase. As well as being a major obstacle in this stage, Filottrano was also the home town of Michele Scarponi who sadly died prior to the 2017 Giro. 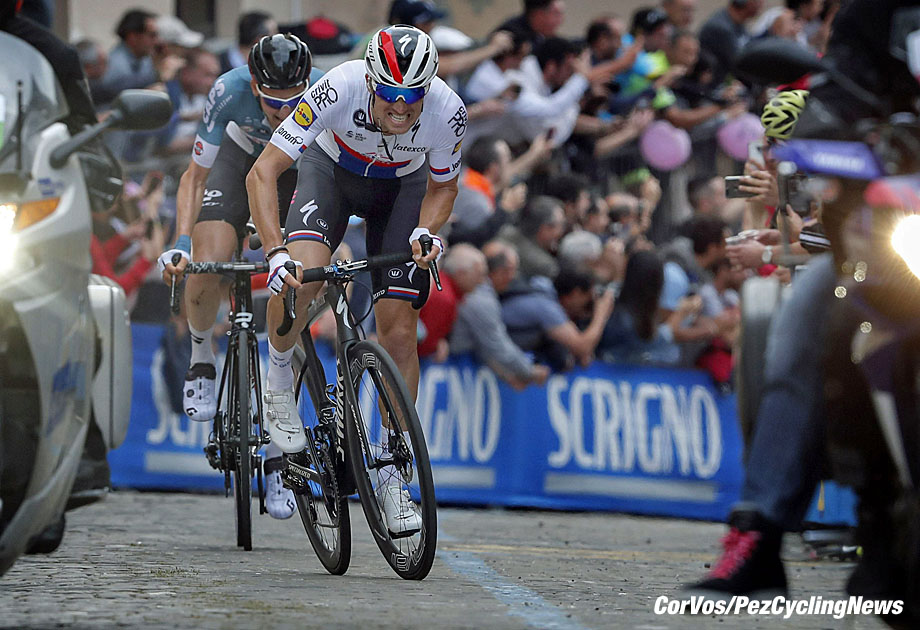 The loss of the dead weight from the break helped them and with 23km left to ride the gap was still 1:45. The peloton wouldn’t give up easily after all the work they had done to keep the lead down but the leading trio were working well. Inside the final 20km though and the break’s resistance was drawing to a close, the gap was barely one minute and both Lotto teams were pilling more and more riders into the chase. FDJ and Sky were also appearing at the front of the peloton but the gap wasn’t tumbling that quickly, it was still over one minute. 15km was the point when the gap finally fell beneath one minute as the steep ramps of the finish loomed. 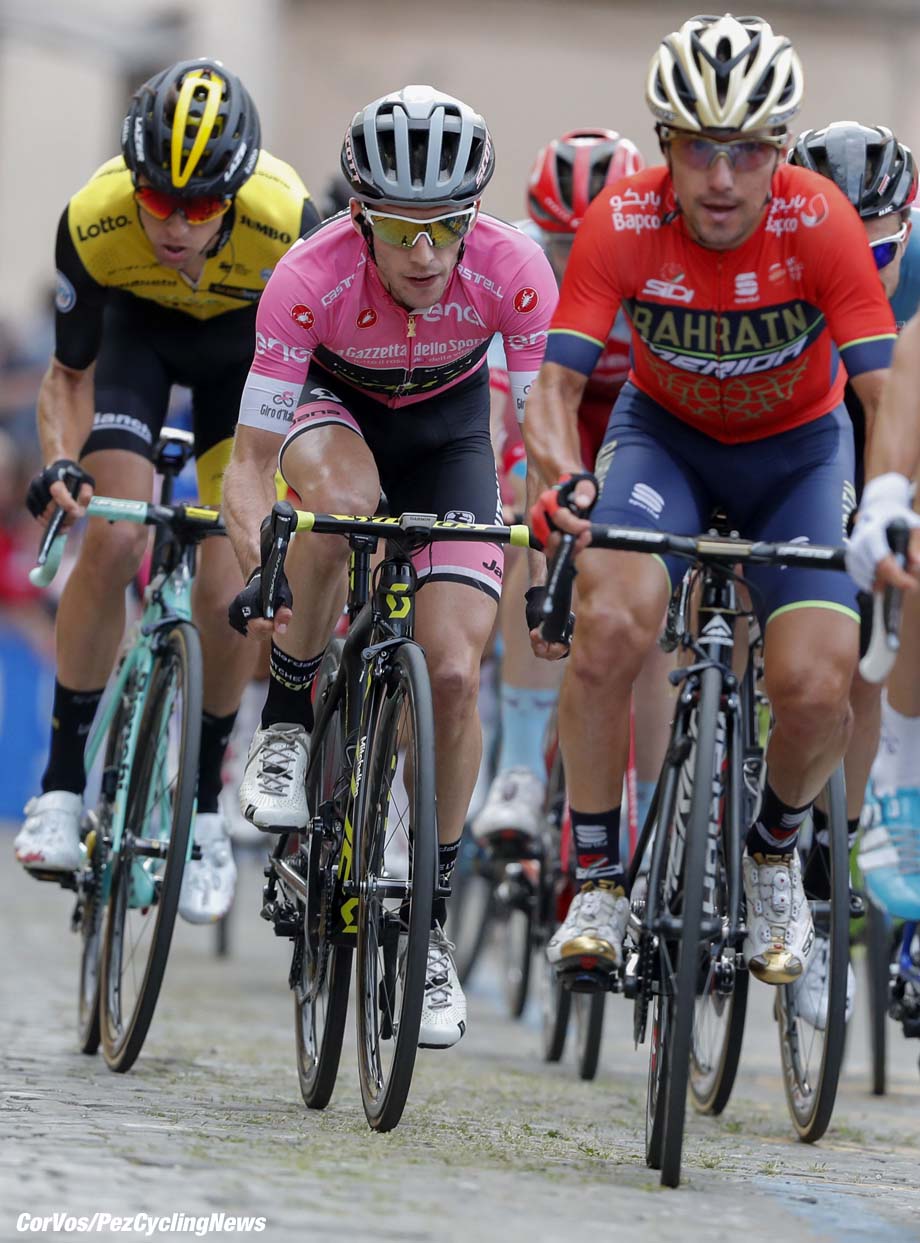 Up, Up and Away
Another steep grind and FDJ were doing all the work at the front of the peloton. The main group were being shredded as the relentless pace took its toll. The leading trio were working well but Masnada was now yo-yoing off the back as De Marchi and Sanchez took up the riding. The gap was still going down but it was 43 seconds now, it wasn’t falling as quickly as the chasing teams might have hoped. In fact, it was now going back out again as the impetus of the chase eased and it was 47 seconds as we started the final 10km. 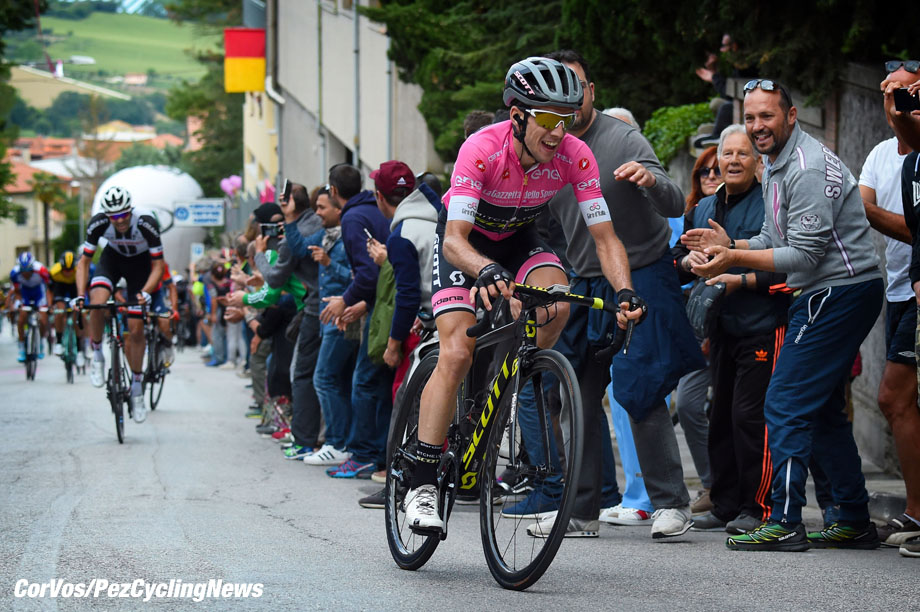 Lotto-Fix All were back doing the chasing and now the gap was falling, 36 seconds with 9km left. 35 seconds with 8km left, this would be considered an easy catch for the peloton put Sanchez was on fire! The Spaniard had barely been off the front in the last 5km but the lead was now just 24 seconds and we hadn’t yet hit the two final walls. 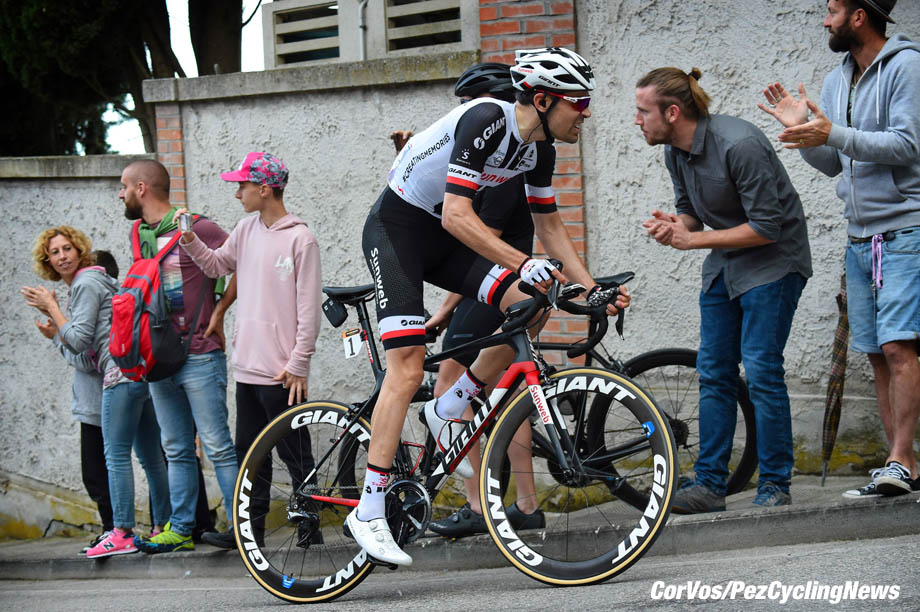 Bahrain-Merida were now all over the front, they hadn’t been anywhere all day but not Domenico Pozzovivo was being set up for the climb. The gap was 12 seconds and it was going to be a GC battle royale. Zdenek Stybar (Quick Step-Floors) went clear and he was joined by Tim Wellens (Lotto-Fix All). The duo were gone, they were flat out down the hill to the final climb but the peloton were chasing hard. The wind was whistling through the microphone on the camera bike as Wellens started the final climb in the lead. There were gaps and it looked like Chris Froome (Sky) was caught out. Wellens went and Simon Yates (Mitchelton-Scott) countered. The Brit was leading out the peloton, then he was gone, he was clear with only Tom Dumoulin (Sunweb) in the picture. Pozzovivo was also clawing the Brit back but Dumoulin was coming back on the flatter section of the climb. 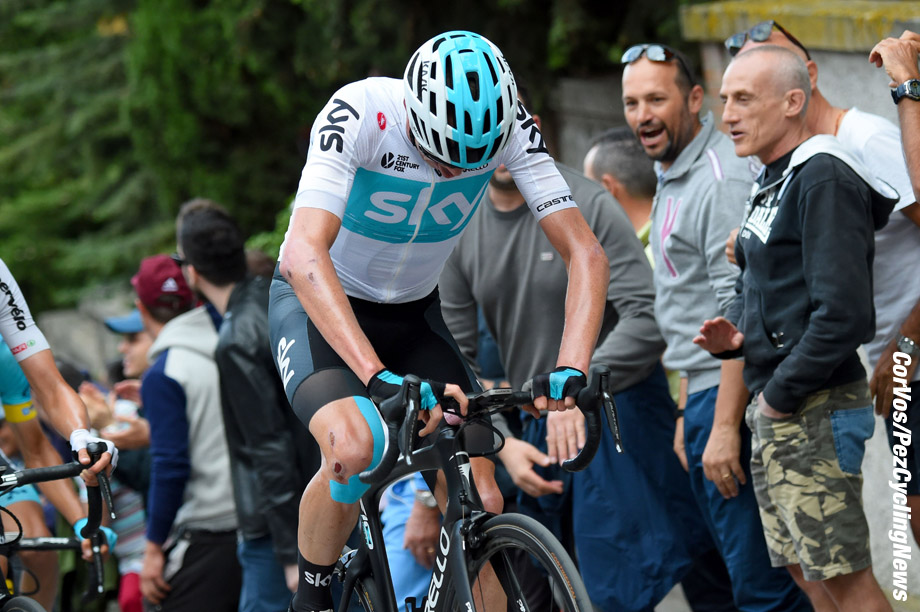 800m and Dumoulin was almost back level. Almost though. He couldn’t close, the Brit was keeping his gap. The pink jersey was flying, Dumoulin was looking strong but Yates was stronger. The road flattened out and the victory was Yates’! The Brit went from an age away from the line and although the finishing terrain suited Dumoulin more, the Dutchman could not close the gap. It was another shocker for Froome who lost over 40 seconds. Fabio Aru (UAE Team Emirates) will be happier but he still handed over time to a rider who he’s unlikely to take any time back from in the time trial. I said it on Sunday and I’ll say it again, Dumoulin has a deficit of 47 seconds but that really translates into a 1.15 lead if you consider the time trial. The Dutchman keeps looking better and better, as does Thibaut Pinot who sits just over a minute down on Yates. This Giro is really heating up. 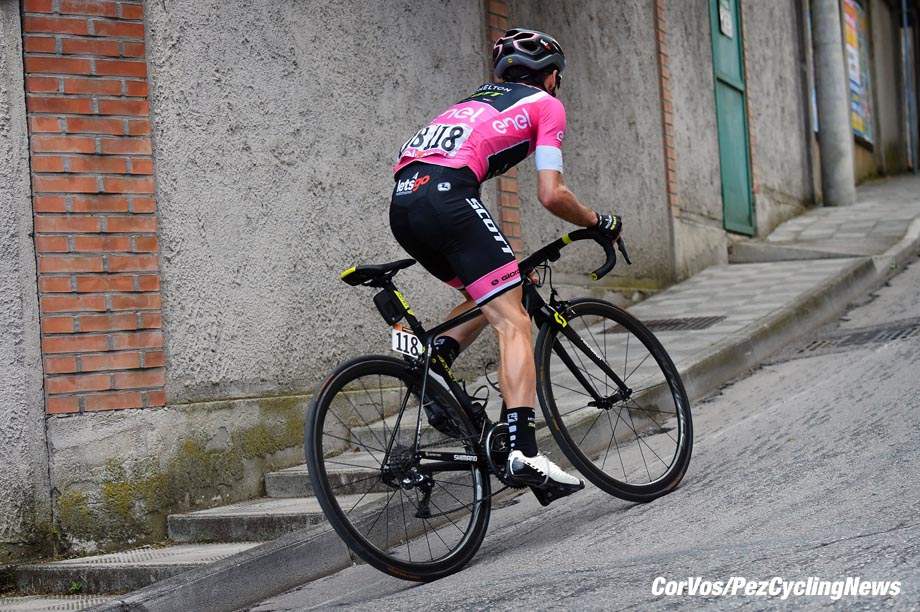 The Maglia Rosa Simon Yates (Mitchelton-Scott): “We decided before the stage that we wouldn’t chase because normally on such a finale there are faster guys like Tim Wellens. Other teams did that for the stage win. The plan was that if it came back I would, of course, try. I’m glad to getting more time on Tom Dumoulin. He was chasing me and he looked better than other days on steep finishes. He’s getting better as the race goes on.” 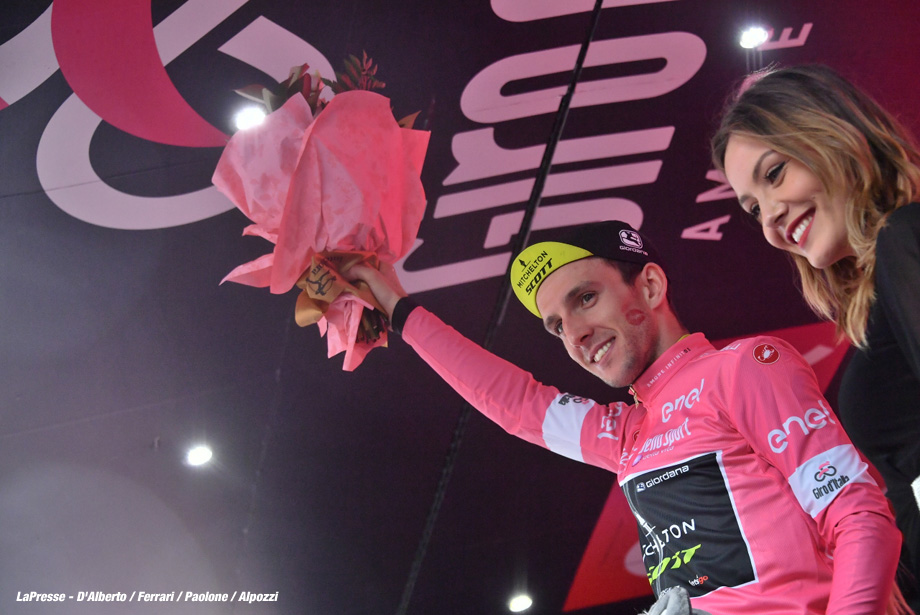