Stage 3 Race Report: Jonathan Caicedo (EF Pro Cycling) won the first mountain stage of the 2020 Giro d’Italia, finishing on Mount Etna. The Ecuadorian champion was the best on the 18 kilometre final climb. The big losers of the day were Geraint Thomas (INEOS Grenadiers), who lost over 12 minutes, and Simon Yates (Mitchelton-Scott) who finished three minutes down on the other GC men. Filippo Ganna (INEOS Grenadiers) was replaced in the pink jersey by João Almeida (Deceuninck – Quick-Step) with Caicedo on the same time. 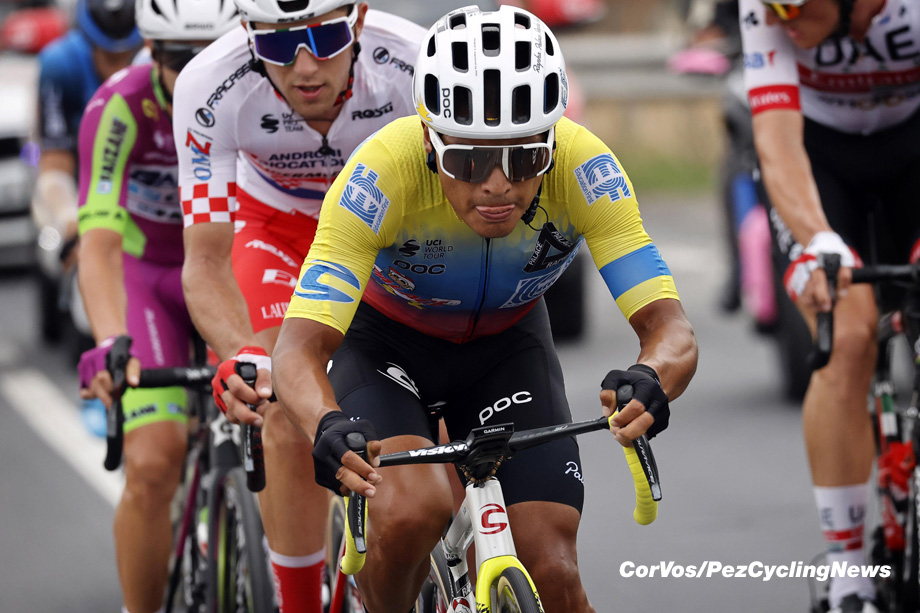 Caicedo won from the break of the day

Before the stage had even started, there was a crash in the peloton. Top favourite Geraint Thomas hit the deck in the neutralised zone. With a few scrapes and a torn shirt, he was able to continue. The start was postponed for a while due to the incident. 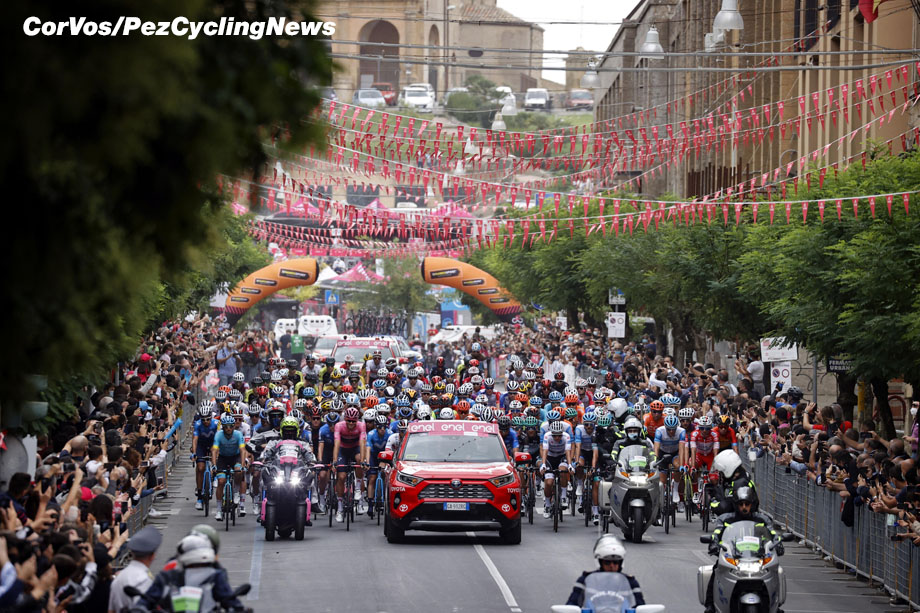 The start from Enna

Stage 3 – ENNA-ETNA (Linguaglossa – Piano Provenzana) – 150km
The stage is hilly at the beginning, and features a first-category summit finish. Over the first 130km, approaching the volcano, the route features a steady succession of milder and harsher climbs and descents, with straight roads alternating with curvy and twisting stretches. Urban areas are crossed mostly on stone-paved roads, whereas along the route the surface is worn out at points. The final climb (nearly 20km) begins past Linguaglossa. 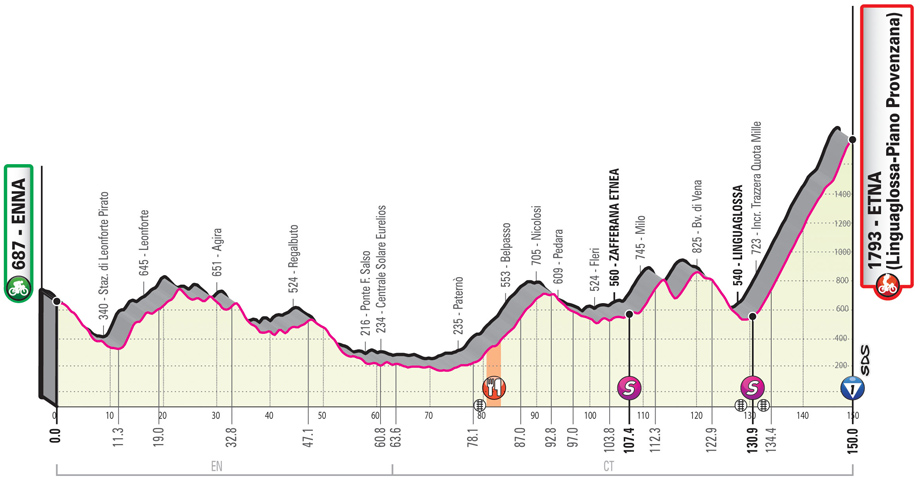 Final KMs
The closing climb (18.9km) ascends along the north-eastern side of the Etna, following a constant succession of hairpins, beside more or less recent lava streams. The mean gradient is 6.6%, with slopes averaging 9% over the last 3km, and topping out at 11% with 1.5km to go. The home straight (50m) is on 6.5m wide asphalt road. 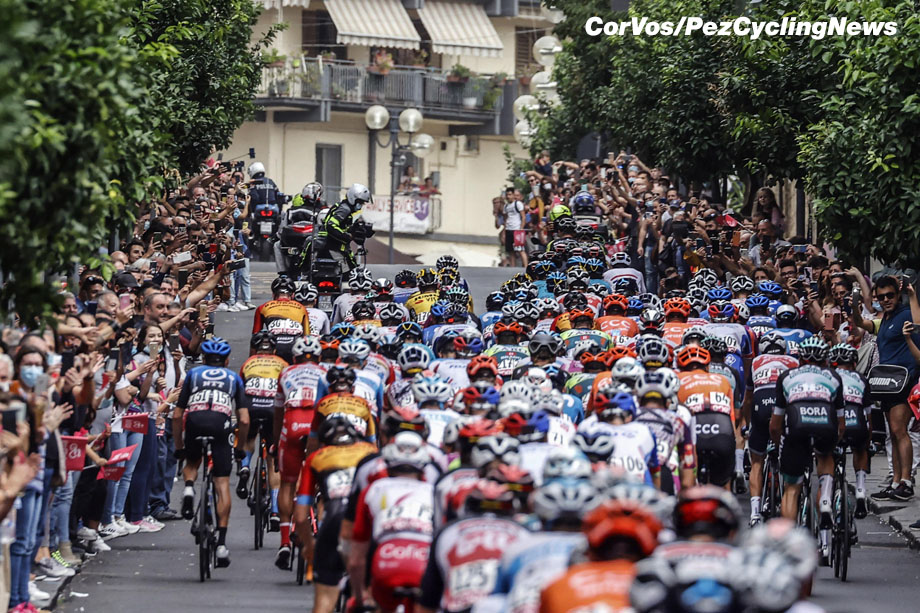 The Sicilian fans were out in force 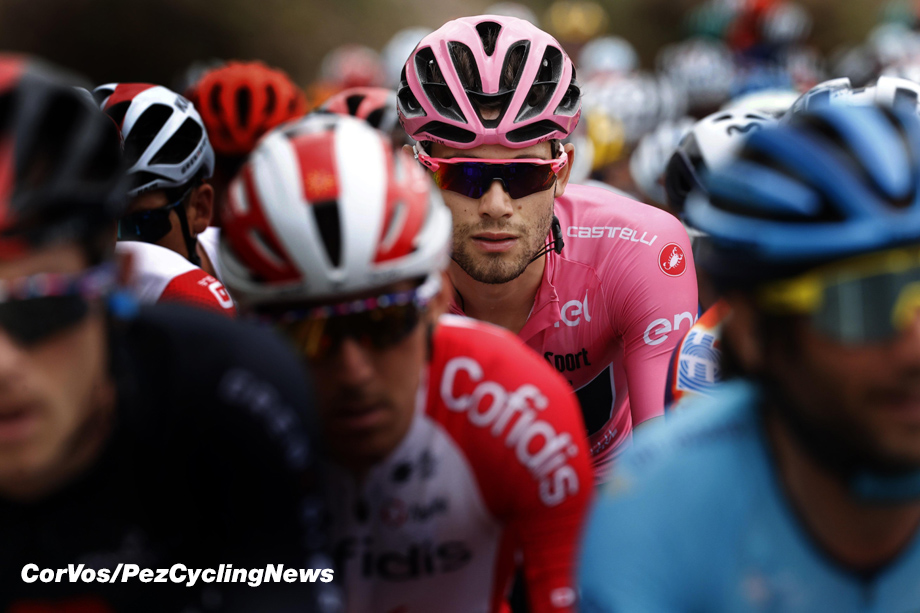 The eight managed to take a lead of about 5 minutes. In the peloton Mitchelton-Scott took control. Thomas’s INEOS Grenadiers and pink jersey Filippo Ganna were happy to let them. The team of Simon Yates allowed the difference to fluctuate around 5 to 6 minutes. On the last section before the descent to the foot of the final climb, Trek-Segafredo took the lead in the peloton and Vincenzo Nibali’s team reduced the difference to 3:30. Meanwhile Romano and Rumac were dropped from the leading group. The other six started the 18.8 kilometre climb at 6.6% with a 3 minute lead. 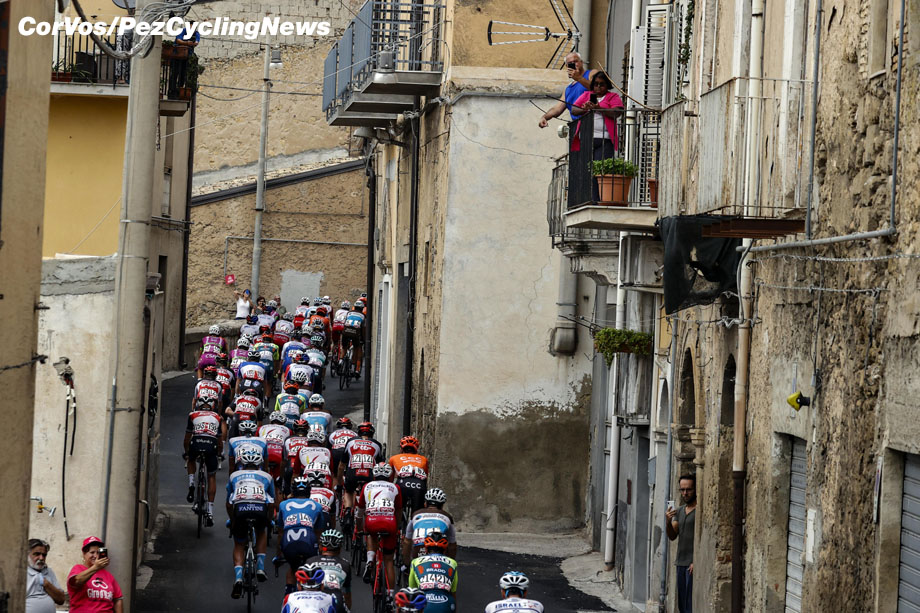 Geraint Thomas ran into problems before the climb of Etna started. The Welshman had to let go of the peloton, but with the help of Ganna and Rohan Dennis he returned on the descent towards the base of the climb, but Trek-Segafredo put the hammer down at the front. Thomas was soon 1 minute behind and his Giro dream was gone. 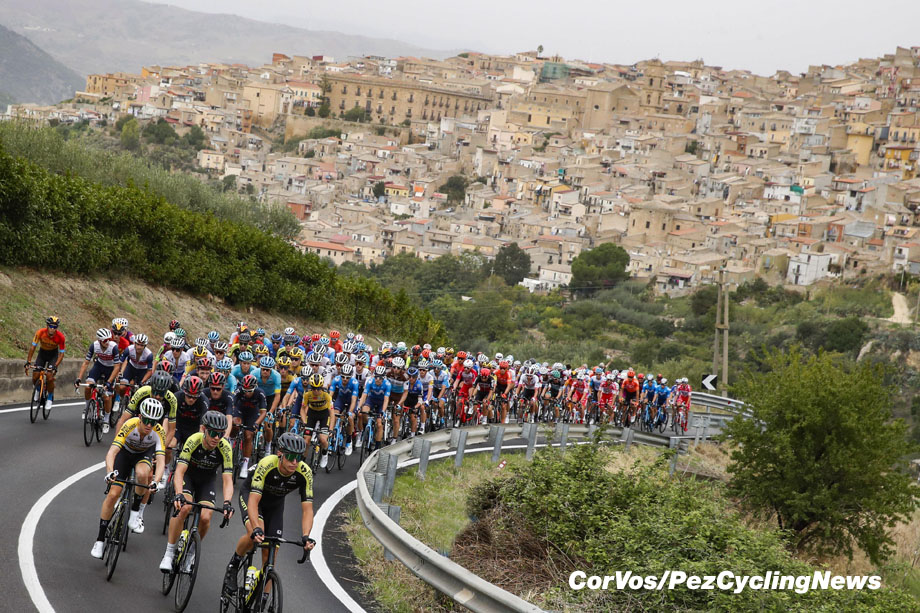 There are many old towns in this part of Sicily

At the front; Caicedo and Visconti dropped Bjerg, but they knew the favourites were approaching rapidly. A serious acceleration from BORA-hansgrohe, at more than 13 kilometres from the finish, caused problems for many riders in the peloton. Majka’s right hand man Matteo Fabbro put in such an effort that Simon Yates lost contact. 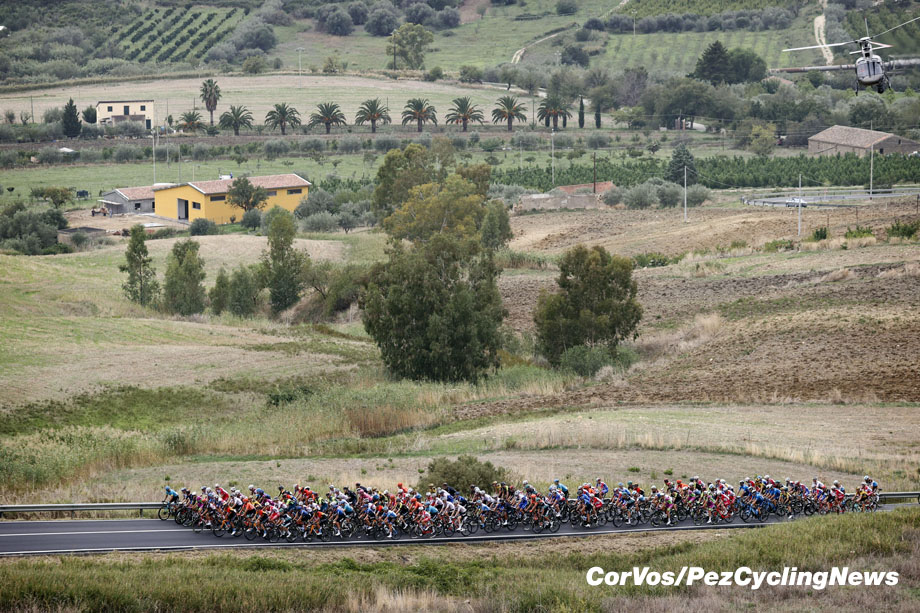 Fertile land due to the volcanic soil

Jonathan Castroviejo was first to attack from the GC group. The INEOS Grenadiers rider saw his chance, but there were several attacks behind, including from Harm Vanhoucke. After the loss of Thomas and Yates, there was little control among the favourites. Their eyes were focused on experienced riders such as Jakob Fuglsang and Vincenzo Nibali, while Wilco Kelderman and Steven Kruijswijk were also close. 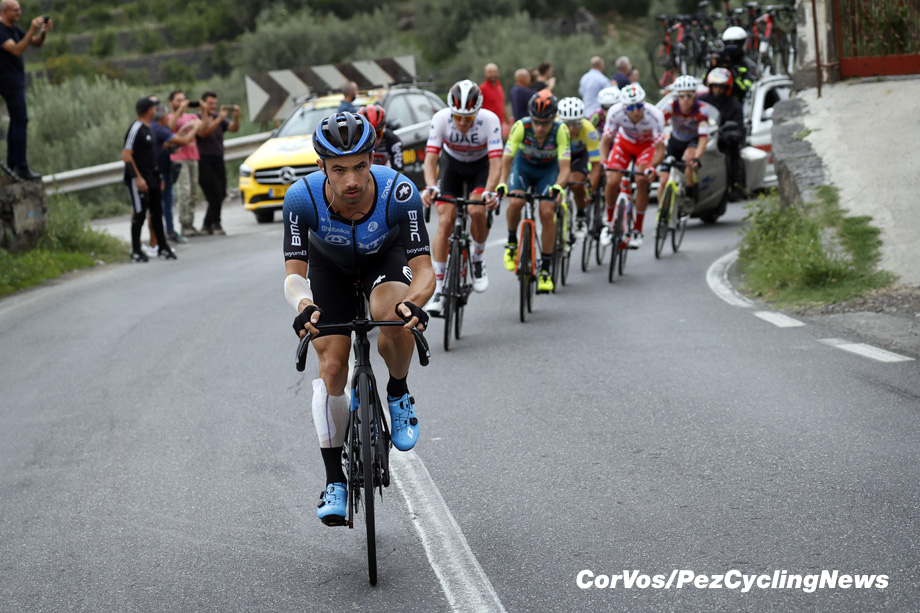 Victor Campenaerts wanted to be in the break today

Early breakaway Caicedo then dropped Visconti and started the last 3 kilometres with more than a minute on the chase group. Kelderman managed to break free with a strong jump. Kruijswijk then had a hard time when Nibali and Fuglsang accelerated, just over 2 kilometres from the finish. Initially, only Domenico Pozzovivo and Rafal Majka could follow, but the Jumbo-Visma leader recovered. Although a move by Fuglsang was too much for Kruijswijk. 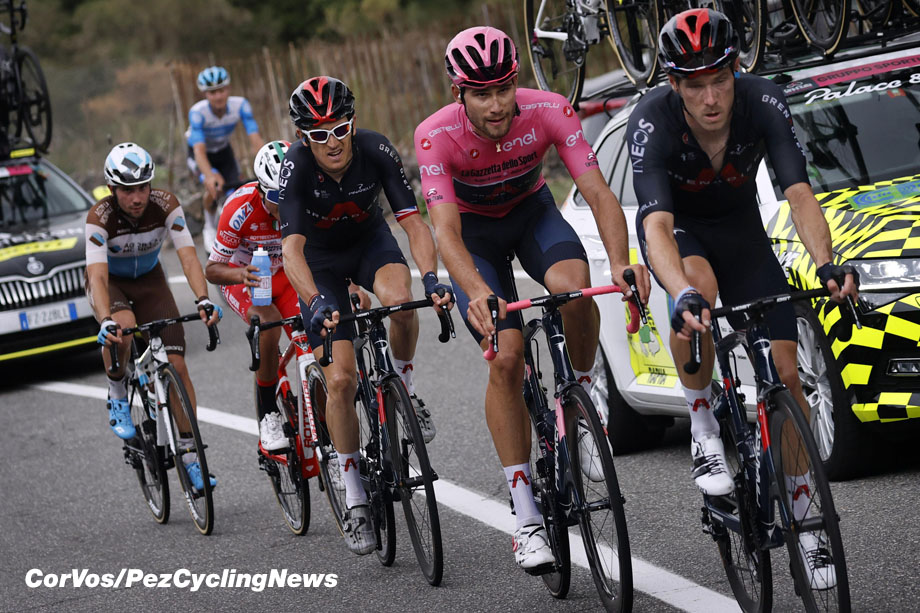 Caicedo managed to hold off the riders from behind in the rainy conditions. Behind the champion of Ecuador, home rider Visconti finished second, just ahead of Vanhoucke, who had dropped Castroviejo and Kelderman. Fuglsang, Nibali, Pozzovivo and Majka crossed the finish line together. Kruijswijk managed to finish 5 seconds behind the Nibali group. 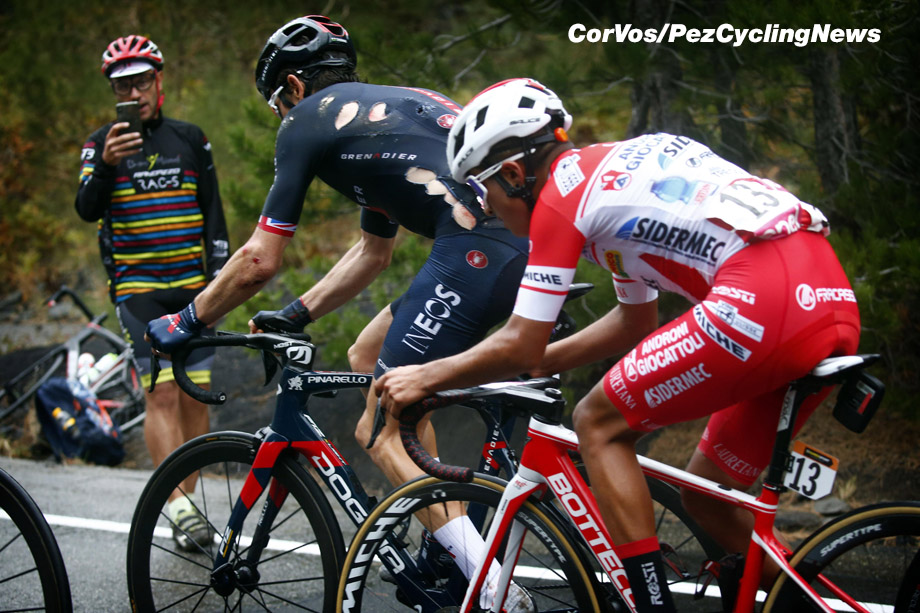 You can see the damage to Geraint Thomas’ jersey

Simon Yates lost more than four minutes to Caicedo at the line. Geraint Thomas had a loss of more than twelve minutes. 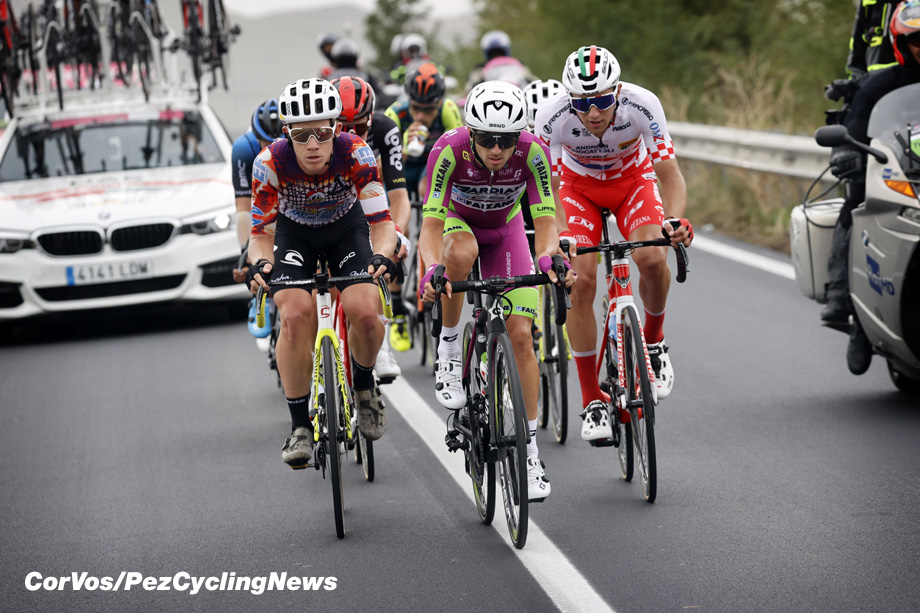 João Almeida moved into the pink jersey due to the loss of Ganna with Thomas. He defended a 1:13 lead over stage winner Caicedo, who also earned a 10 second bonus at the finish. Almeida crossed the line at 1:03 behind Caicedo and so they ended up in the same time. Because Almeida was 28 hundredths faster in the time trial, he is the new overall leader. 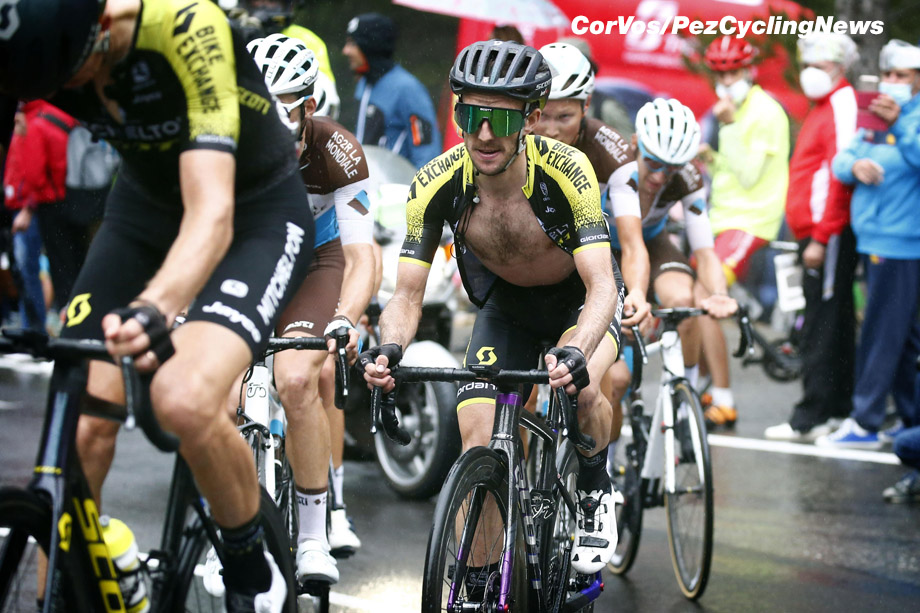 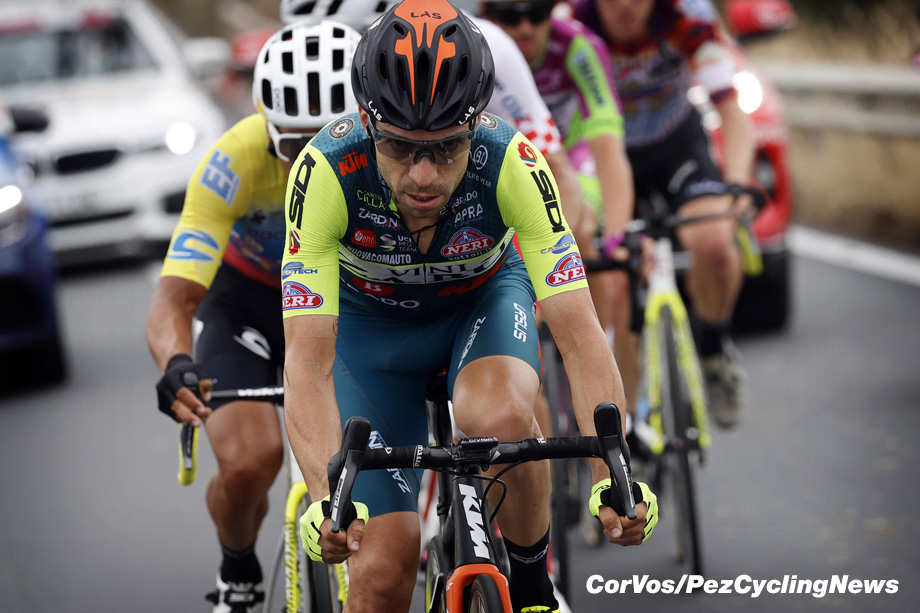 Visconti held on to Caicedo

Behind: Pello Bilbao is now third at 37 seconds from Almeida. Wilco Kelderman is fourth at 0:42, followed by Harm Vanhoucke at 0:53, Vincenzo Nibali at 0:55 and Domenico Pozzovivo at 0:59, all still within a minute. Jakob Fuglsang and Steven Kruijswijk are also in the ‘Top Ten’ and are at 1:13 and 1:15 of the pink jersey. 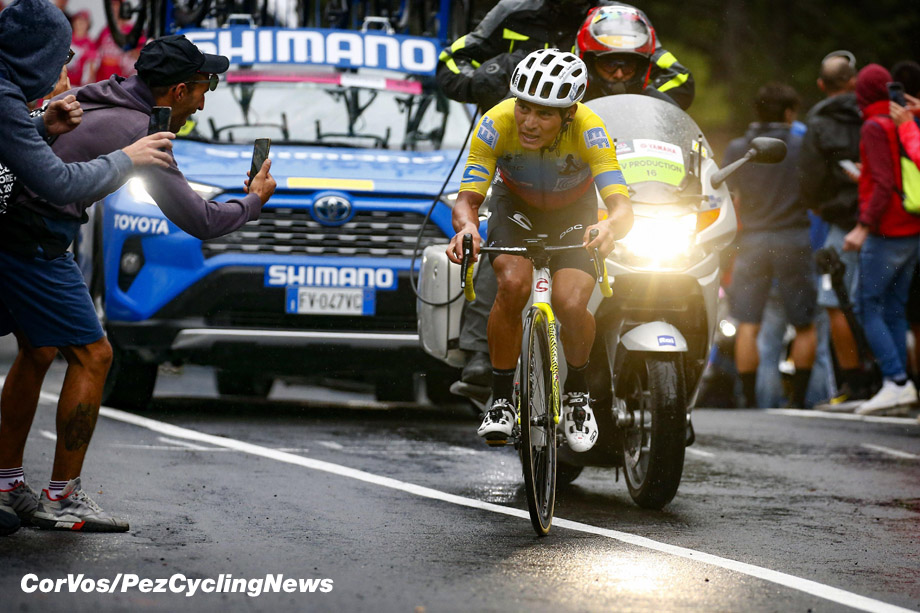 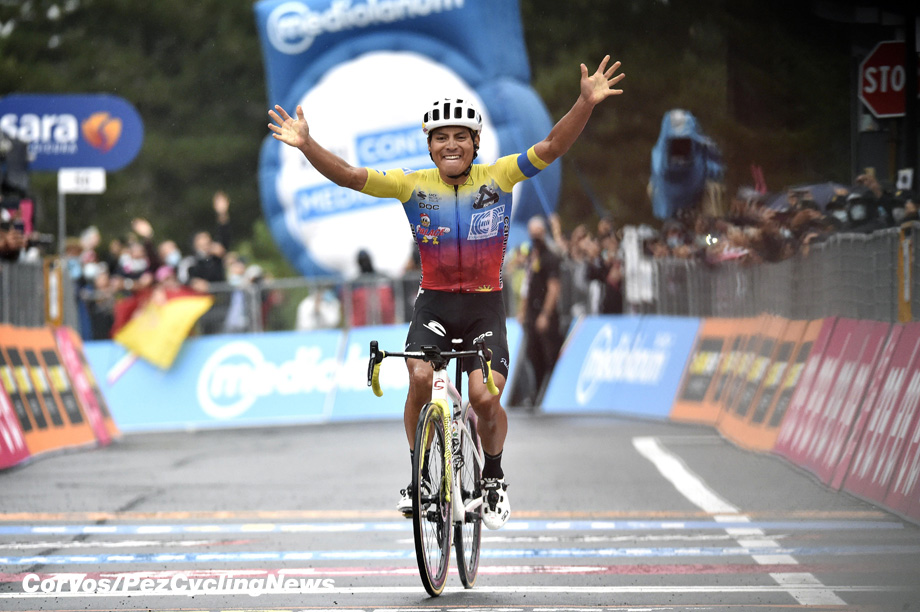 The stage win and nearly the pink jersey

Stage winner, Jonathan Caicedo (EF Pro Cycling): “From this morning we had decided that I would try to attack and go in the breakaway. We did it, we took a good lead on the peloton and then on the Etna climb I managed to drop Visconti, I’m very happy.” 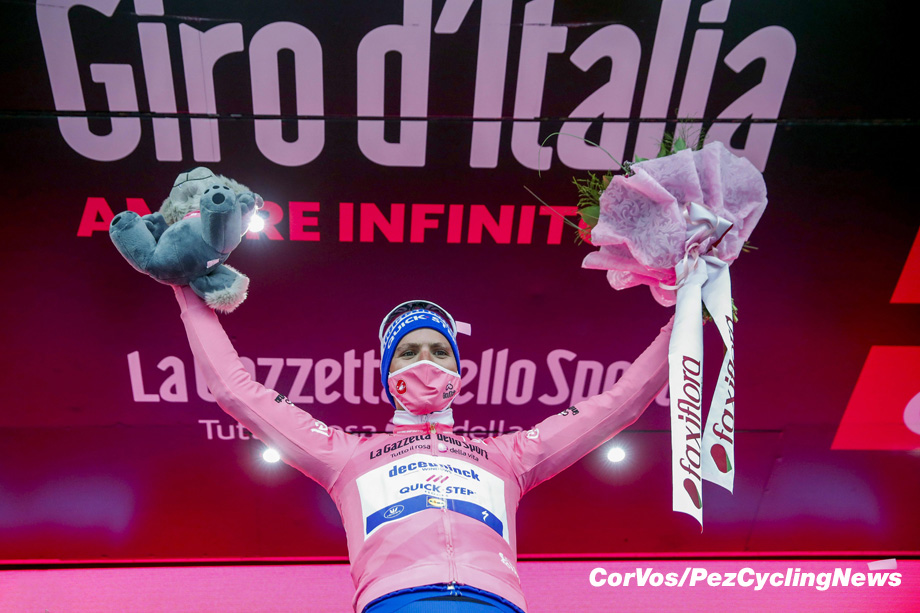 Almeida in pink, but only just

Maglia Rosa, João Almeida (Deceuninck – Quick-Step): “Cannot describe this feeling, it’s a dream that becomes true. I tried to do my best on the climb and stay with the main favourites for the GC. It’s a dream.”

# Stay PEZ for all the Giro d’Italia race reports and news. #