Giro Stage 19 Race Report: Five men were left to fight it out for the stage victory on the steep final climb to Santuario di Castelmonte. It was KOM Koen Bouwman who crossed the line first, but only after a bizarre sprint where some riders went the wrong way. There was a GC battle, but the top-3 stayed the same. Carapaz, Hindley and Landa. 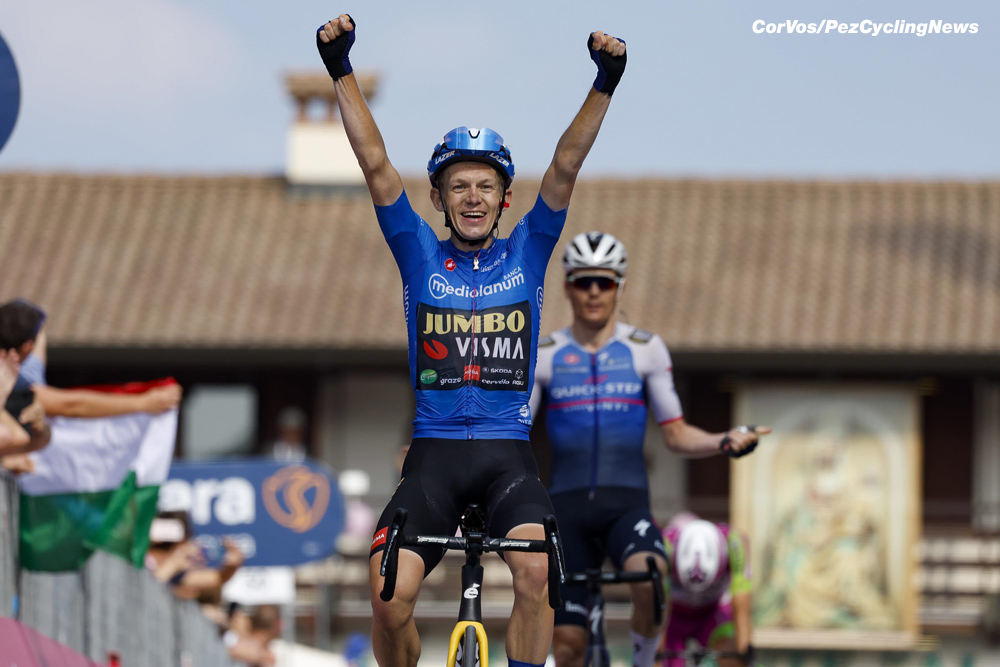 KOM Koen Bouwman ahead of a less than happy Mauro Schmid

Koen Bouwman won the nineteenth stage of the Giro d’Italia 2022 in Santuario di Castelmonte. The Jumbo-Visma climber was the best of five escapees on the final climb, who were left from a leading group of twelve. It was a great day for Bouwman, who also cemented his win in the KOM competition. 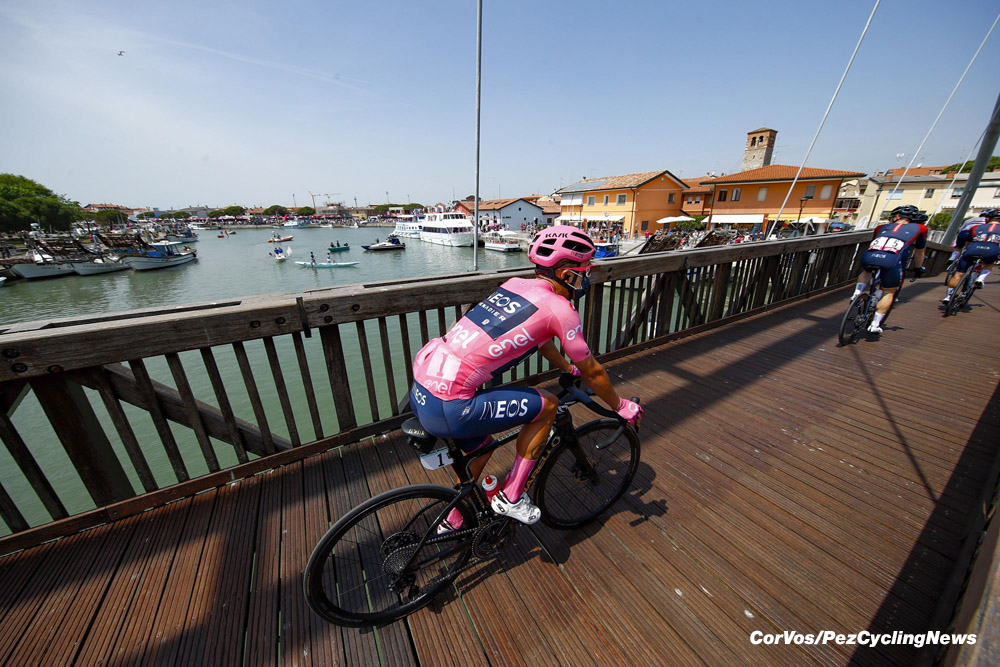 Richard Carapaz makes his way to the start

The Route:
A challenging mountain stage, crossing into Slovenia and closing with a summit finish. Starting in Marano Lagunare, the route cuts across the lowlands, all the way to the morainic hills around Fagagna and Majano. The stage course crosses Buja, reaches the Julian Prealps, runs past the Grotte di Villanova (a short but intense climb) and tackles the Passo di Tanamea. The route enters Slovenia through the Uccea pass, leading directly to Kobarid (Caporetto). Here, the peloton will tackle Mt. Kolovrat, ascending at a near 10% gradient for 10km (with gradients easing off for a short stretch halfway up the climb). After clearing the Passo Solarie, a long false-flat descent, snaking through the woods, leads back to Italy. Reaching Cividale del Friuli, the peloton will tackle the closing climb, heading toward the Castelmonte sanctuary. 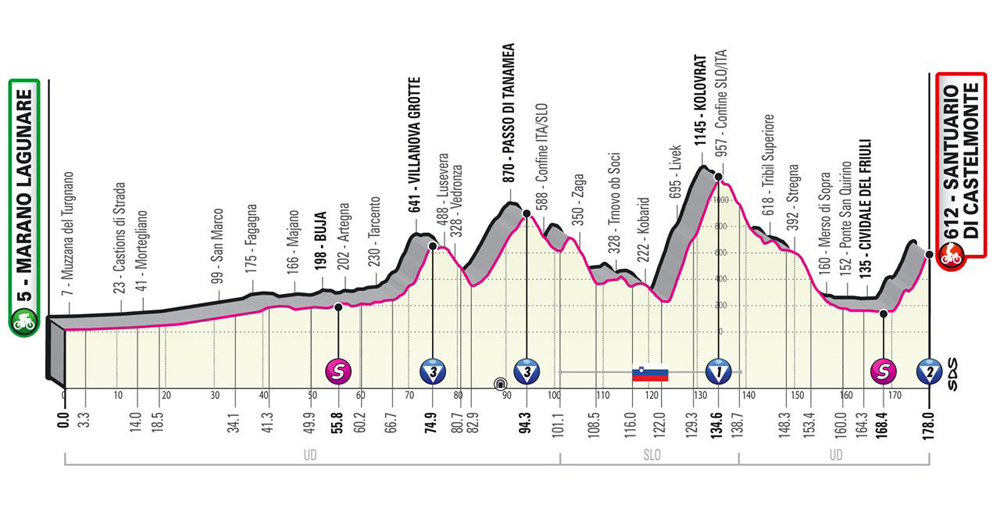 Final kilometres
The final climb is approx. 7km long, with a short downhill stretch after 2.5km. The sharpest gradients (up to 13%) are found at the foot of the climb, and when the road starts to go up again after the fall. 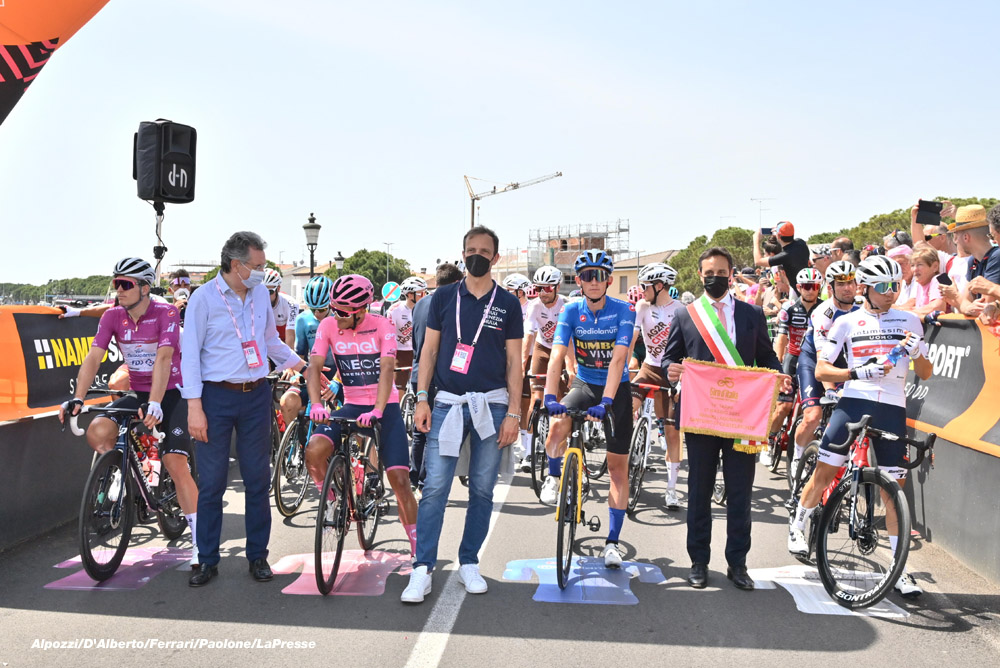 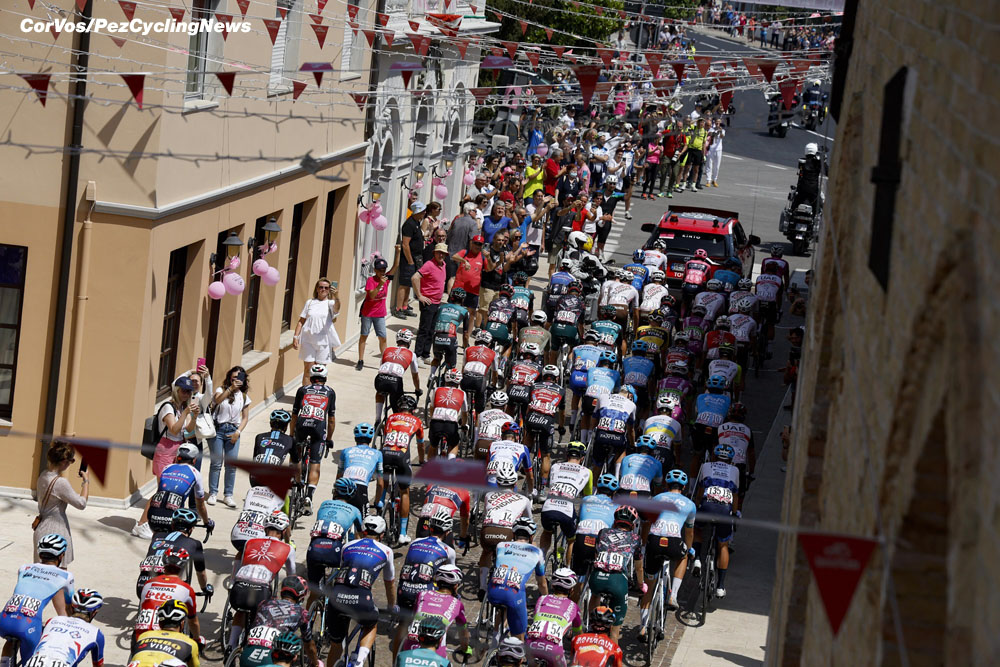 The start of the stage from Marano Lagunare was almost flat which encouraged the attacks. Mathieu van der Poel was one of many who made an attempt to jump away, but none of them worked. After more than 10 kilometres, twelve riders including KOM Koen Bouwman managed to escape. His competitors for the blue jersey, Giulio Ciccone and Diego Rosa were both missing. 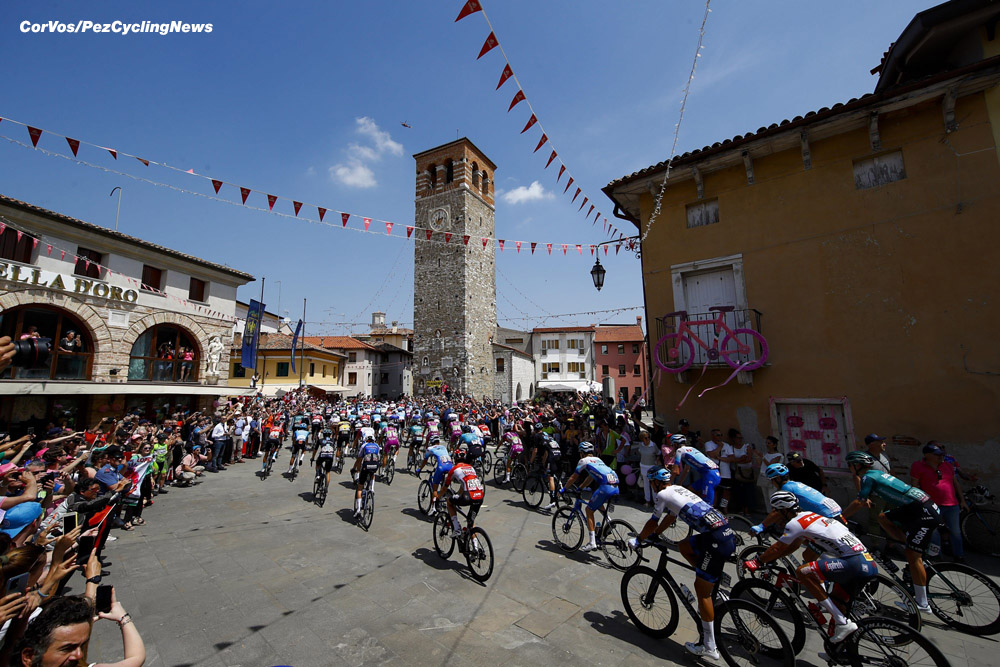 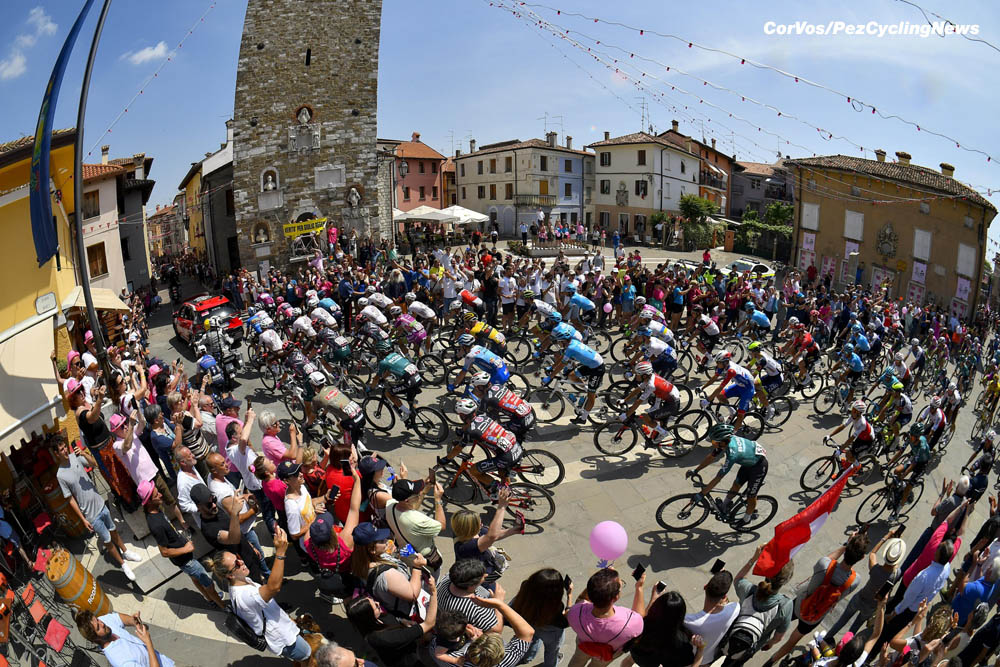 The main square of Marano Lagunare 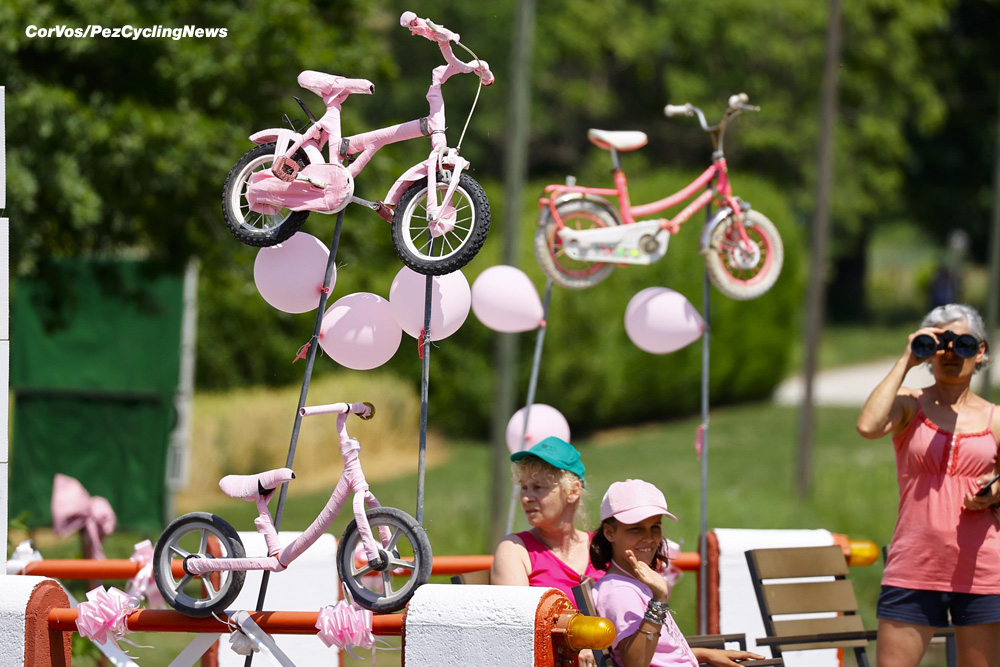 The peloton gave the leading group more than 11 minutes of a lead, until BORA-hansgrohe took control of the peloton. As a result, the difference fluctuated around 9 minutes for a long time. On the first climb of the day, the Cat. 3 Villanova Grotte, Bouwman took 9 points. Behind; the peloton split on the descent, but the dropped Domenico Pozzovivo was able to return to the favourites group. 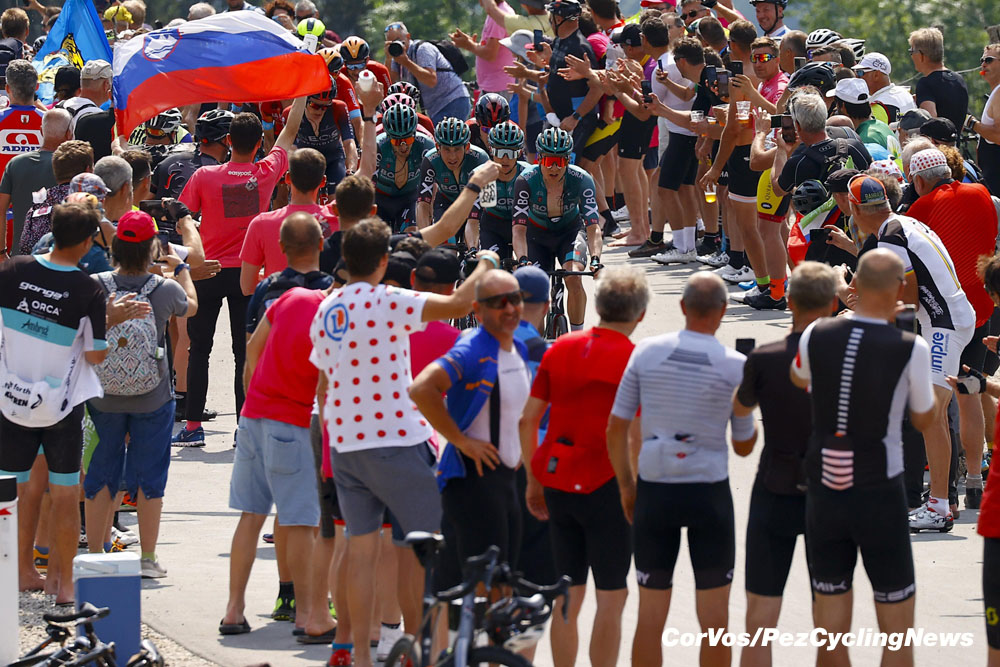 At the top of the Passo di Tanamea, Bouwman again took 9 points and could secure the mountain jersey on the next climb of the Cat. 1 Kolovrat (10.3km at 9.2%), provided he makes it to Verona. With a lead of 9 minutes, the break, which was now on Slovenian territory, started the Kolovrat climb. Affini sat up, now that he had finished his work for Bouwman. 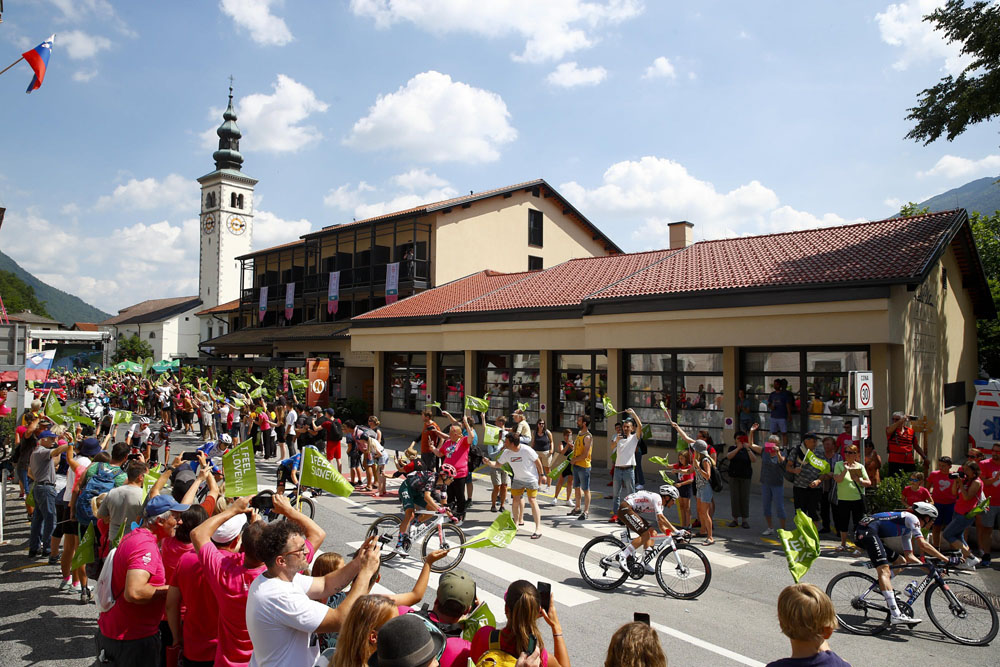 The leading group was considerably thinned on the steep climb, only Schmid, Tonelli, Bouwman, Valter, Vendrame and Cort remained out front. Not much later Cort and Vendrame were dropped from the group on the 14% ramps. Bouwman, Schmid and Valter pushed on, while Tonelli fought to stay on their wheels. Four riders came over the summit, and the Dutchman took the points and assured himself of the final win in the mountains classification. 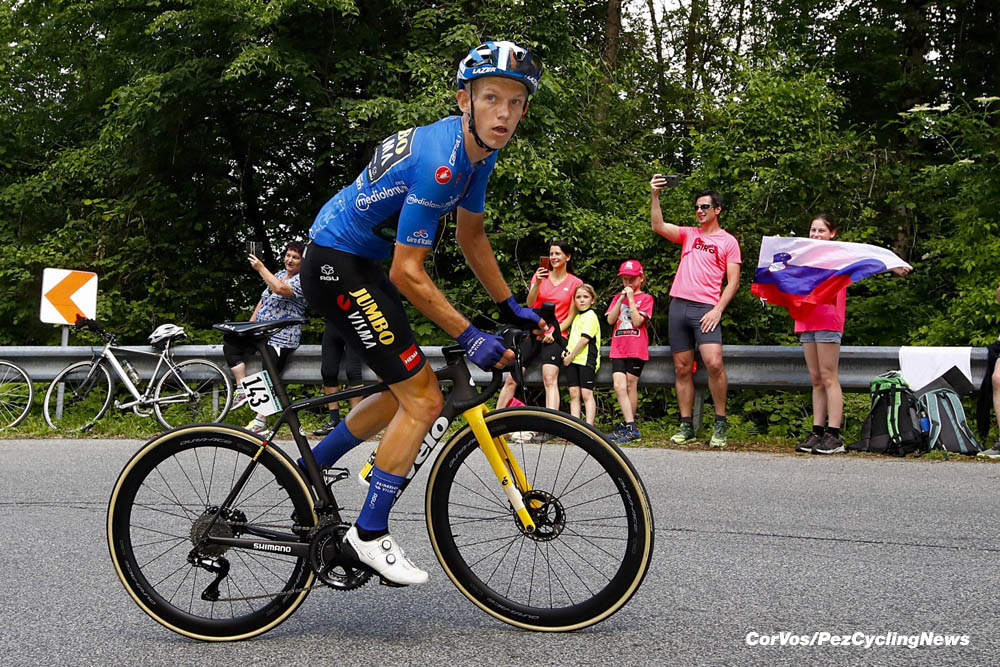 Koen Bouwman made sure of the KOM jersey, as long as he finishes on Sunday he can’t be beaten

In the peloton, BORA-hansgrohe set the pace, but Edoardo Zardini was able to escape from the group, but they didn’t get much closer to the break either. At the back of the pack many were unable to hang on. The difference remained between 7 and 8 minutes. On the long descent of the Kolovrat, Vendrame was able to rejoin the front riders, and the five started the final climb to Santuario di Castelmonte (7.1km at 7.8%). 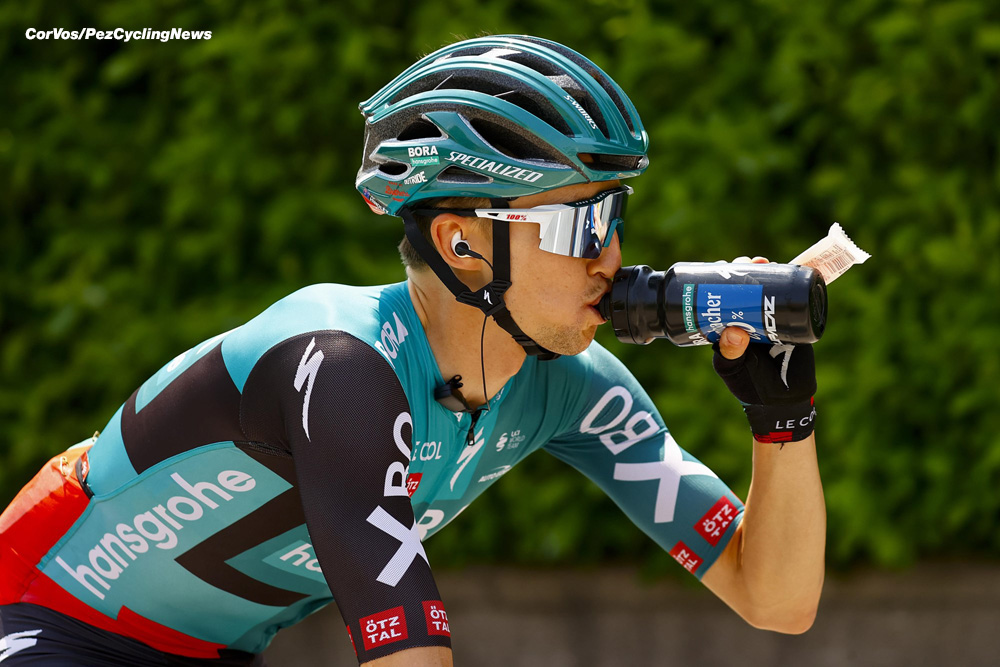 Hindley had a plan, but Carapaz was ready

Bouwman, Schmid, Valter, Vendrame and Tonelli had a lead of more than 8 minutes at the base of the climb, because BORA-hansgrohe had suddenly stopped chasing, and so they knew they were going to fight for the stage win. It was a long wait for the first attack, partly because the two fast men; Vendrame and Schmid. As a result, there was a lot of poker playing in the final. 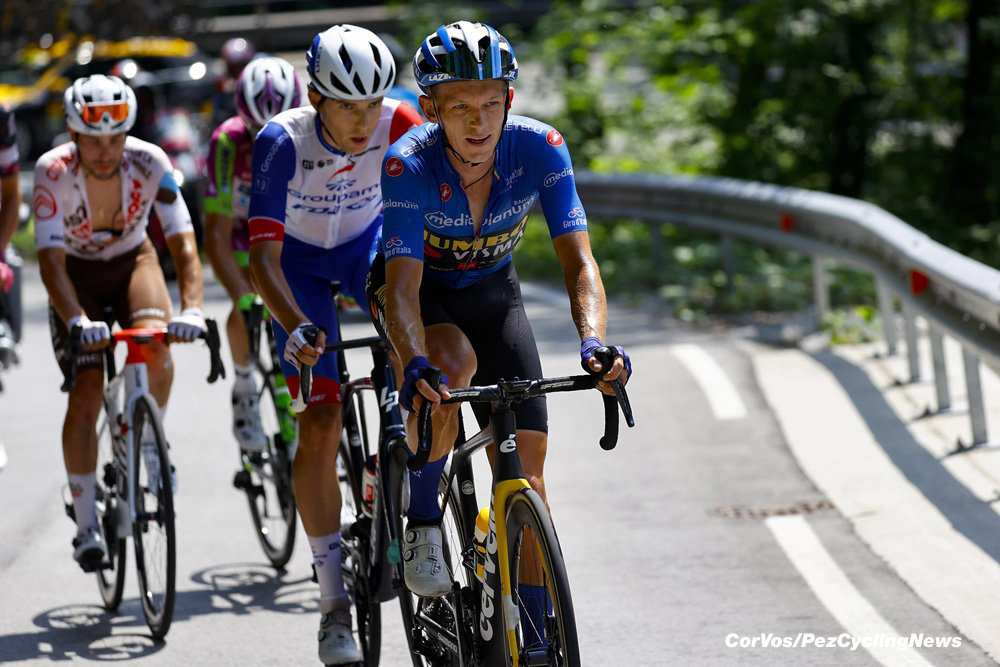 The break was down to five for the final

The first attack came in the last 3 kilometres from Bouwman, Valter reacted. Vendrame had a hard time, but was able to return. A new set of attacks followed, but no one could really make a gap. Not much happened on steep ramps of up to 12%, so the five started the last kilometre together. It turned out to be a sprint finish. Bouwman was the first to start and was the first to take the last corner, 70 metres from the finish. He kept Schmid and Tonelli behind him on the tight bend. Valter and Vendrame made an error of judgment on that last corner and had to brake and were fourth and fifth respectively. 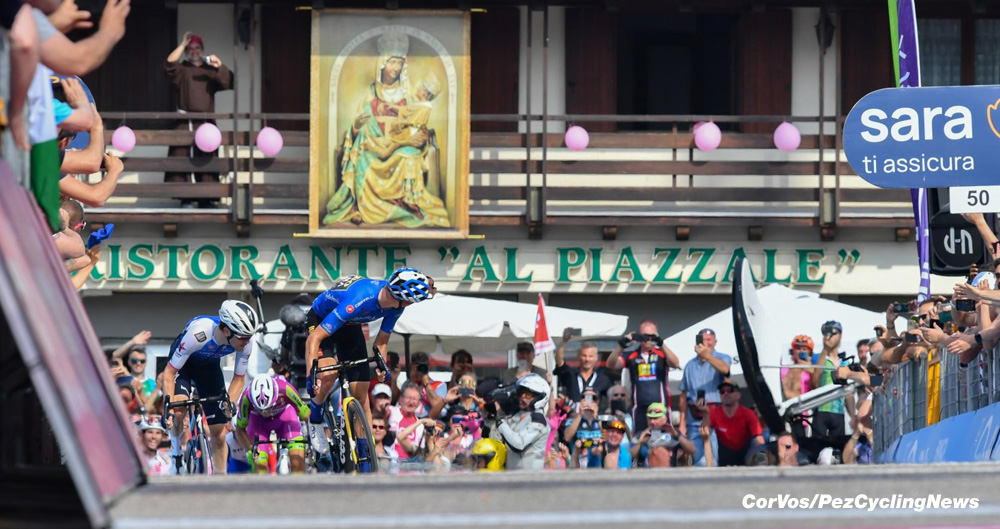 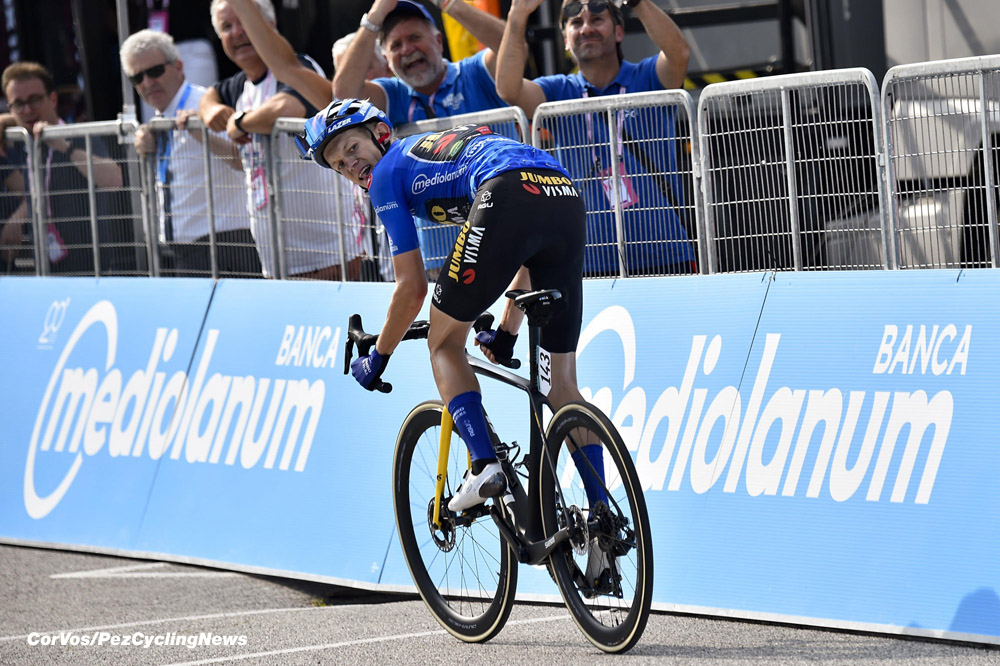 Bouwman could see the chaos behind him

After the finish there was a lot of discussion about that last corner. Did Koen Bouwman make an dodgy manoeuvre cutting off Mauro Schmid? The Swiss rider of Quick-Step Alpha Vinyl thought so, but the jury decided – after a long deliberation – not. Bouwman was the stage winner. 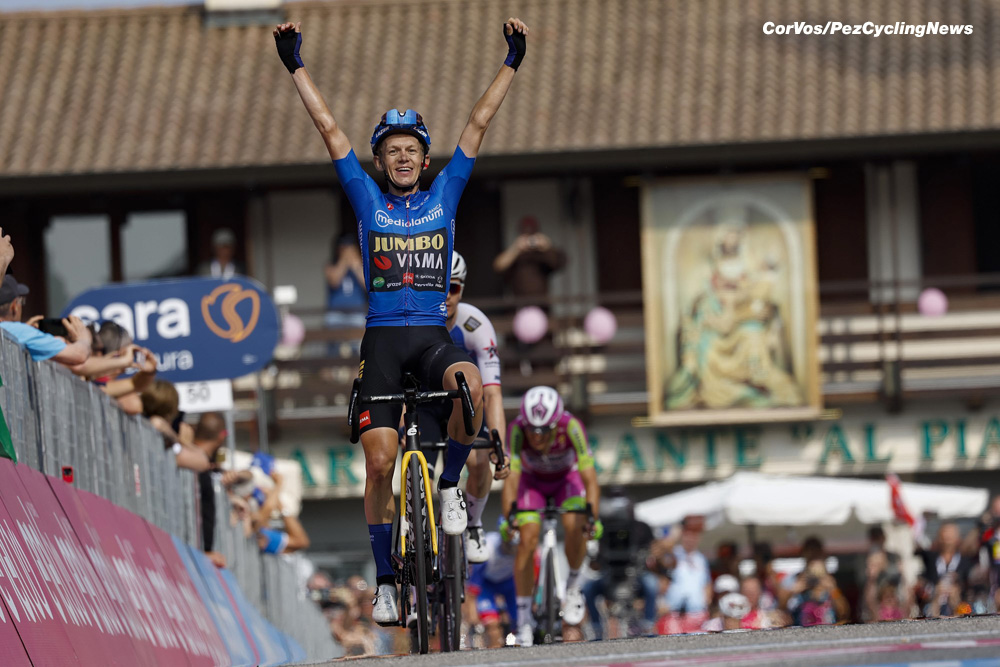 A top day for Koen Bouwman

In the favourites group there was some action on the final climb. Pavel Sivakov thinned out the group with an acceleration with Carapaz in his wheel. It was too fast for Pozzovivo, Juan Pedro López and Alejandro Valverde, and others. It turned out to be the prelude to an attack by Carapaz at 2 kilometres from the finish. However, Jai Hindley and Mikel Landa were immediately on his wheel. The Spaniard then put in his shot, but the pink jersey wearer and the Australian immediately closed the gap. In the final kilometre Carapaz tried a second time, but his competitors didn’t give him an inch. This allowed the other top GC men to pull them back. The sprint was on and Carapaz crossed the finish line ahead of Hindley and Landa. All eyes are now on Saturday’s gruelling mountain stage to Marmolada, with the Cima Coppi on the Passo Pordoi. 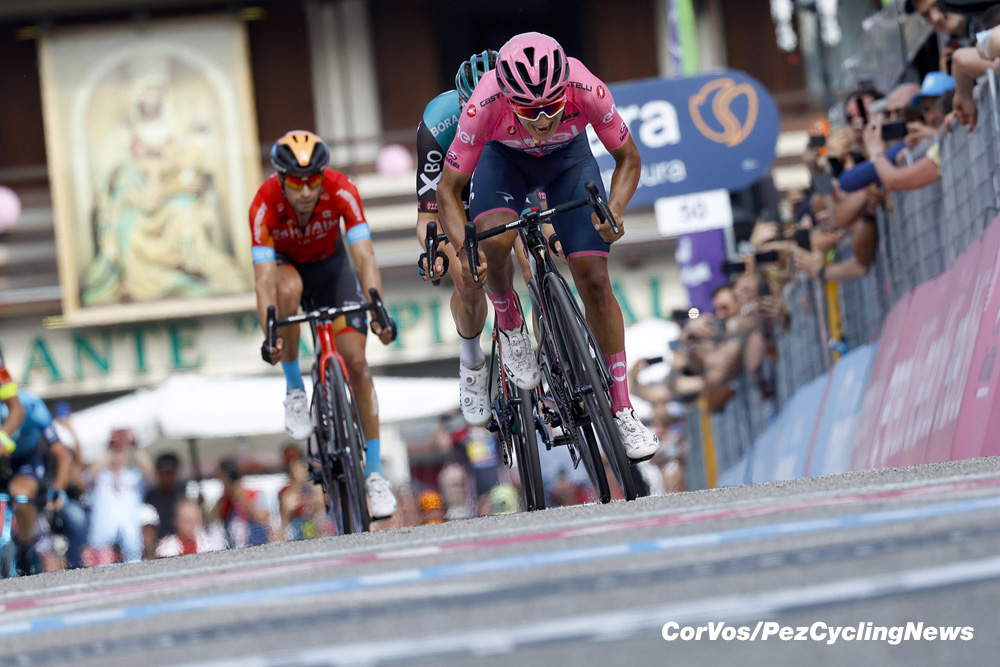 Carapaz had the best final sprint

Stage winner and KOM, Koen Bouwman (Jumbo-Visma): “After I won one stage I said anything else would be a bonus. Today I rode for the Maglia Azzurra and I’m glad I secured it. I knew about the last corner but I didn’t expect it to be that sharp. I had to break but it’s great that I was in the best position there. That gave me the win. I’m delighted.” 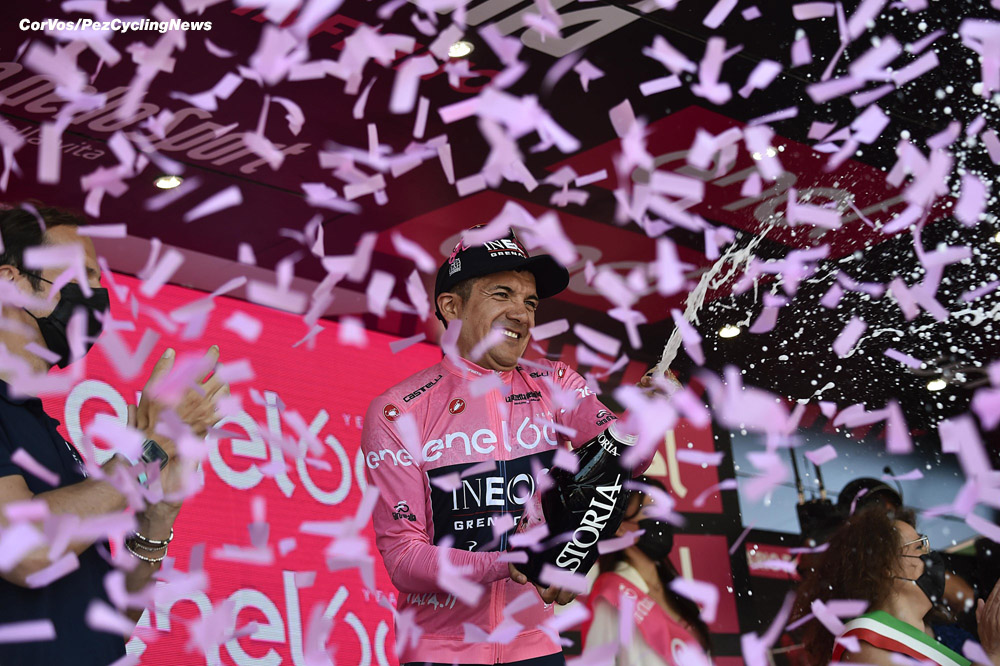 Maglia Rosa, Richard Carapaz (INEOS Grenadiers): “It’s been a pretty hard stage. It’s a pity that we lost Richie Porte early in the race but the team has done a great job and Pavel Sivakov is in a great shape. All top 3 riders, we’re together. It’s fine with me. Whatever happens tomorrow will be fine with me too.” 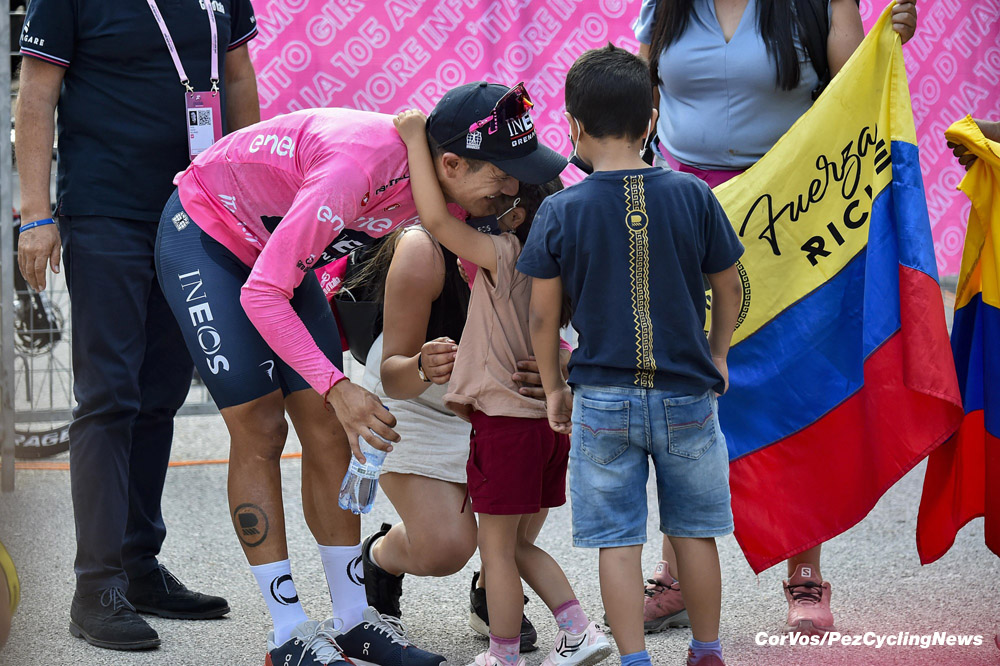 The Carapaz family in Italy for the second Giro win

# Stay PEZ for the final two stages and much more… #