Roadside Report: The last race chase of the year was this past weekend in Italy for our race chaser Alessandro at the beautiful semi-classic, Giro dell’Emilia. The iconic arches in Bologna and the difficult finishing circuit with its demanding climb always make for a great race and a very crowd friendly event where this year Davide Rebellin at 43 years old turned back the hands of time to take the victory.

This is now the race that ends everything. I’m on the way back home and it’s starting to rain; a few minutes ago I was together with my friends Salvo and Angelo and we were saying goodbye, promising new adventures and new moments together. The truth is that many months will have to pass before having another day out together, chasing cycling and enjoying simply the fact that we are alive and in good health.

It seems only a few days ago when we started the season in San Gimigniano, with Strade Bianche, but already eight months have passed. Early wake ups, chasings, travels, kilometers, pictures, starts, finishes, reports, early breaks, delays, traffic. Any of the moments we had together are now a good point of discussion. The race has gone and the barriers are already on the side of the road now but we decide to stay some more time, just to have those minutes for us. We want enjoy the magic a bit longer. A thunderstorm is coming to Bologna from the north but we don’t care anymore. It can rain, now. We had the fun, we don’t need good weather anymore. At least until next March.

Today’s race is the Giro dell’Emilia, 200 kilometers around the city of Bologna and the final circuit on Via San Luca, the steep iconic climb of this Classic. The starting list is not at the level of past years, especially with the Tour of Beijing and Paris Tours scheduled on the same week end. But some good Italian riders are here, and anyway, this race is cool regardless of the start list. 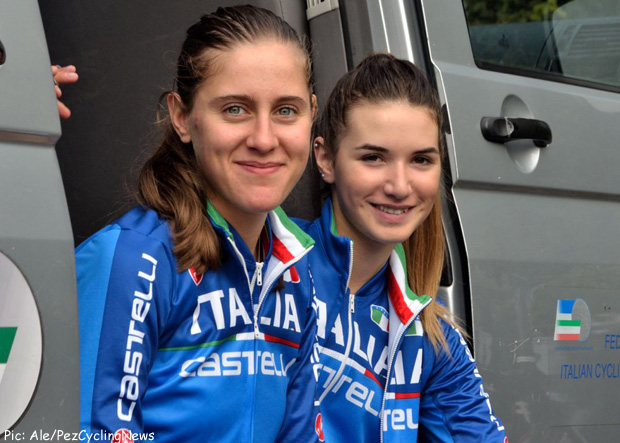 This year there’s also the women’s race, planned the same day, just a few hours before. The start of the two races (men and women) is located at Bologna Fiera, and the two villages are just a few hundred meters apart. So, while the men are closed inside motorhomes, we decided to watch the girls preparing. 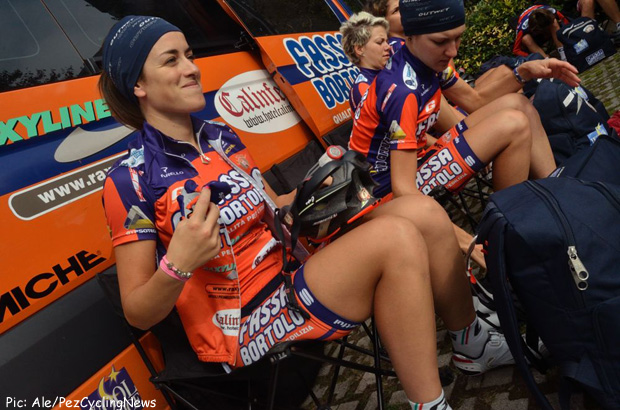 These girls are very friendly with photographers, maybe they’re not used to so much attention, and it’s fun to spend time at their village spying also on the team’s tactical meetings: “Last 10km before the climb you have to push as hard as you can; the bunch must split in pieces before the climb because of your hard work!”, said Michele Fanini’s team director. These moments are really impossible to see with men, always closed in the big buses.

The start is set at noon, so when we come to the finish line, on top of San Luca, it’s already lunch time. The Emilia press party is waiting for us! This time I dedicate my attention to the salame felino dish but Angelo prefer the Bolognese pasta. Good choice, Angelo: we are in Bologna! 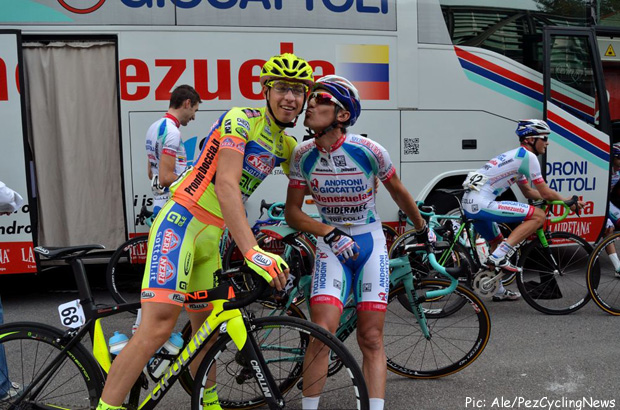 Giro dell’Emilia is relaxed. One of the favorites, Pellizzotti, jokes before the start

This race give us the possibility to relax and really enjoy the day and the party is the best moment of it. There’s no running from one place to the next one, the five time passage on the final climb gives the possibility to watch all the riders more than once. It’s simply fantastic. It’s a sunny warm day, it’s strange to think that just few hundred kilometers far, in Genova, the rain is putting the whole city in trouble with several rivers invading the roads. 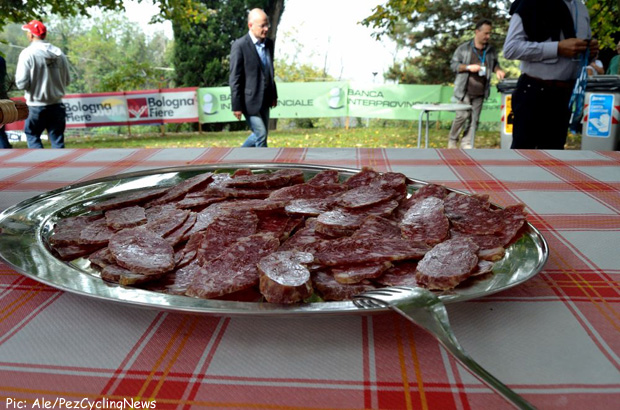 The media buffet is a highlight of Emilia too – Salami, salami and salami! This is called salame felino. 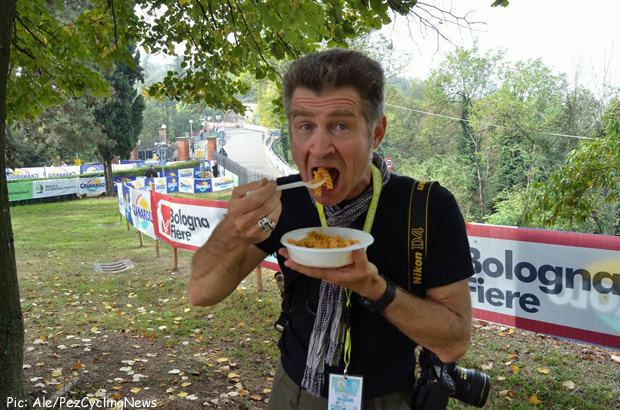 But Angelo preferred the pasta Bolognese

The climb to San Luca is two kilometers long. So, from the top we walk down to the bottom, we spot a passage at Arco del Meloncello, the monument at the foot of the hill, and then we climb, passage after passage, till the top again. This time, while we descend, we meet the women’s race at the very hardest point of the climb. These girls are hard ones, believe me. Their race climbs the hill just once but this is enough to break your legs, especially after 100km competition. But I couldn’t see one of them turning back. They are all very proud to do what they do, and they proceed despite some of them being completely exhausted. 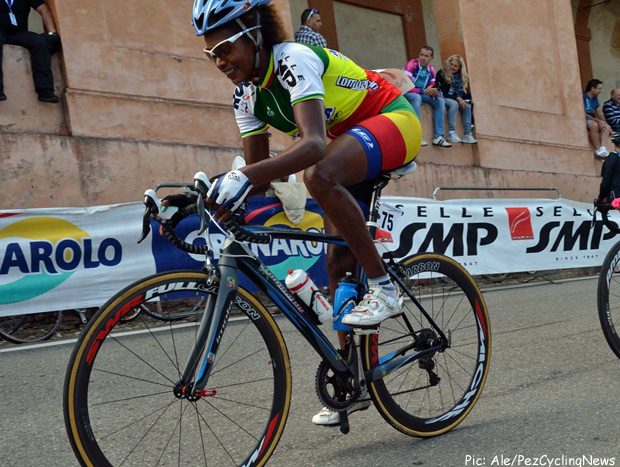 Me and Angelo continue to the bottom, but Salvo remains to the same place to enjoy the sun. Today, after a great performance at Lombardia last week, I gave a big responsibility to him: the telephoto, while I remain with the wide angle. The reason is easy, Salvo is a beginner but I like a lot his creativity with the camera and if he will continue, I’m pretty sure he will come out with some good stuff. 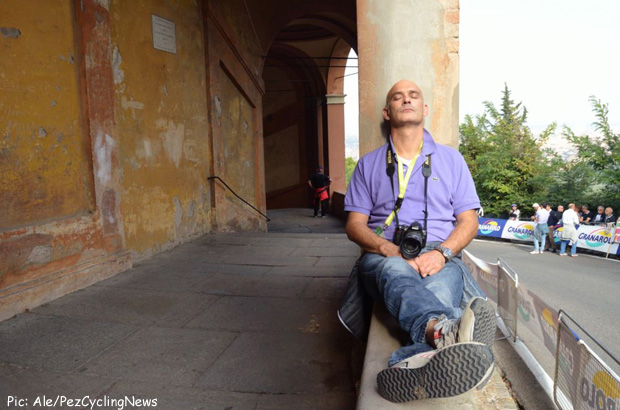 Salvo having a rest before the storm

Down below, at Meloncello, there’s a lot of people already, and the pro race is coming. Three leaders but usually they are caught well before the second passage on the top. This time a young Italian, Zilioli of the Androni team, will continue till the last climb. Unfortunately he was caught at two km to go from the finish. 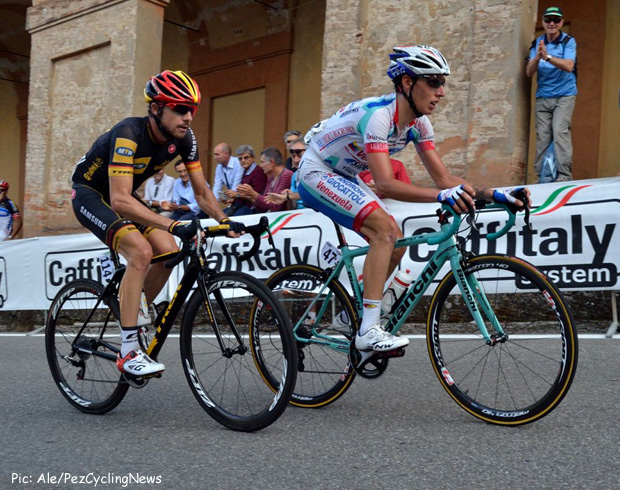 Zilioli and Van Rensburg climbing during the second climb

The race is won by Rebellin, who won also in 2006, a lifetime ago. I was here that time and I was reporting for Pez. Just now I realize how many editions I have watched during the last years and I feel a bit older. I wonder if Rebellin is thinking the same. I was hoping for a Davide Villella victory, but this guy was a bit in trouble already when he punctured during the third lap and he had to give up. The reason I was supporting him today is that I remember how well he rode last year when he was appointed by Cannondale as intern. 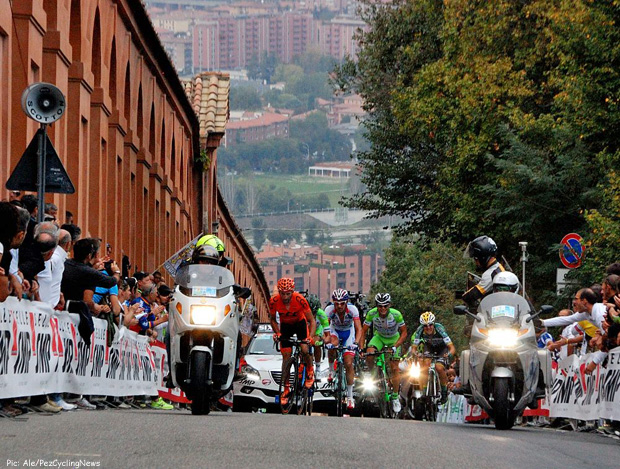 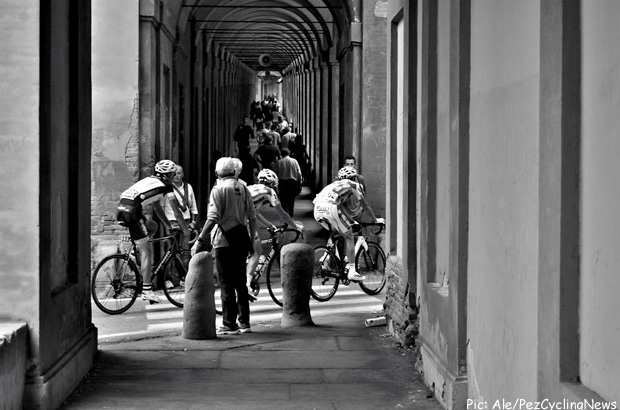 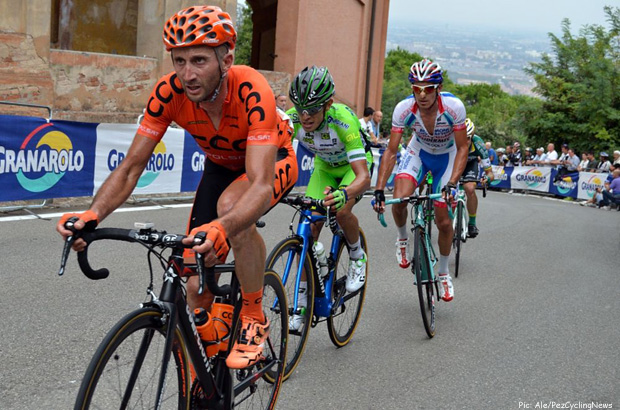 As soon as the race finished the weather changed and a thunderstorm took the place of the sunset we were prepared for. It’s how things change and finish. We decided to remain a few minutes more telling each other that we will meet soon, we will be in touch anyway, despite races are over for a while. In fact each of us know we will miss all this. Not the race, not the riders, but the opportunity to spend some time with pure friends, talking about anything we have in mind and with no other target than to take home some good memories and some pictures to share with you all; our remote, great PEZ family of readers.

Now it’s over for a while. That was simply the Giro dell’Emilia story, and it’s how another season comes to the end. 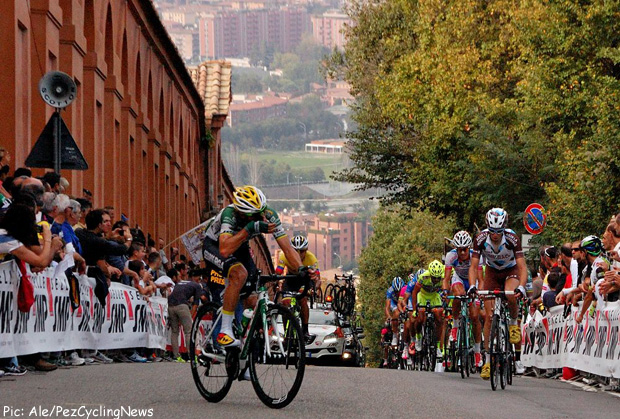