Race Report: The 113th edition of the Tour of Lombardy was won by Bauke Mollema. The Trek-Segafredo rider attacked on the penultimate climb of the day, the Civiglio, taking a good gap and then rode solo to his first monument victory. After 38 years, the Netherlands finally has a successor to Hennie Kuiper. Alejandro Valverde (Movistar) was second and Egan Bernal (Ineos) third. 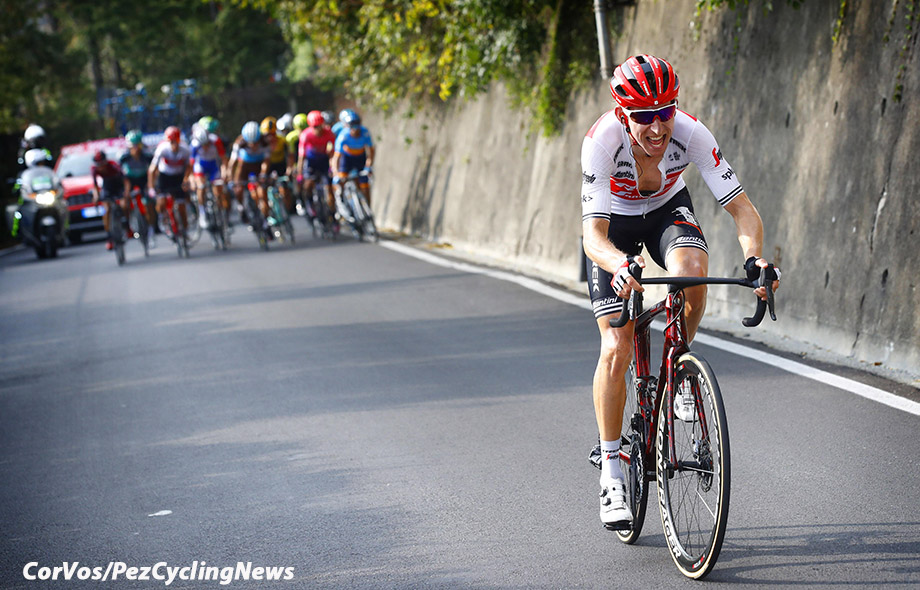 The winning attack for Bauke Mollema

Giro di Lombardia – Bergamo to Como – 243 Kilometres
From Bergamo the race heads in a southerly direction to Casazza where the Colle Gallo – the first ascent of the race – is tackled. Colle is followed by a fast descent returning via the Seriana valley to Bergamo, then to Brianza. Next up is the Ghisallo ascent with gradients of up to 14% on wide roads with different hairpin bends. There is a very fast descent that ends at Maglio where, immediately after a right turn, the climb of the Colma di Sormano begins. After a few km of medium slopes, and a few hundred metres after Sormano, the route heads up the Muro di Sormano on a narrow, very steep road, (2km long, with a gradient up to 15%). Very narrow bends and slopes that, for around 1km of distance, exceed 25% up to almost 30%.

Once past the Colma, the route descends to Nesso, and then takes coastal road to Como. Next the hard climb to Civiglio (614m) with slopes of around 10% with a narrow road at the top of the climb. The finalé the course goes back down and through Como to hit the last climb of San Fermo della Battaglia (397m). 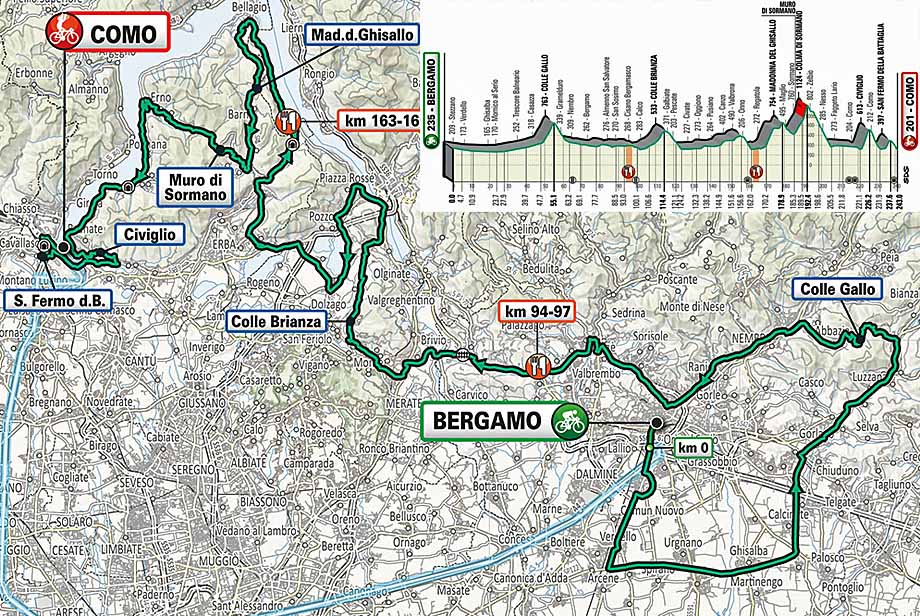 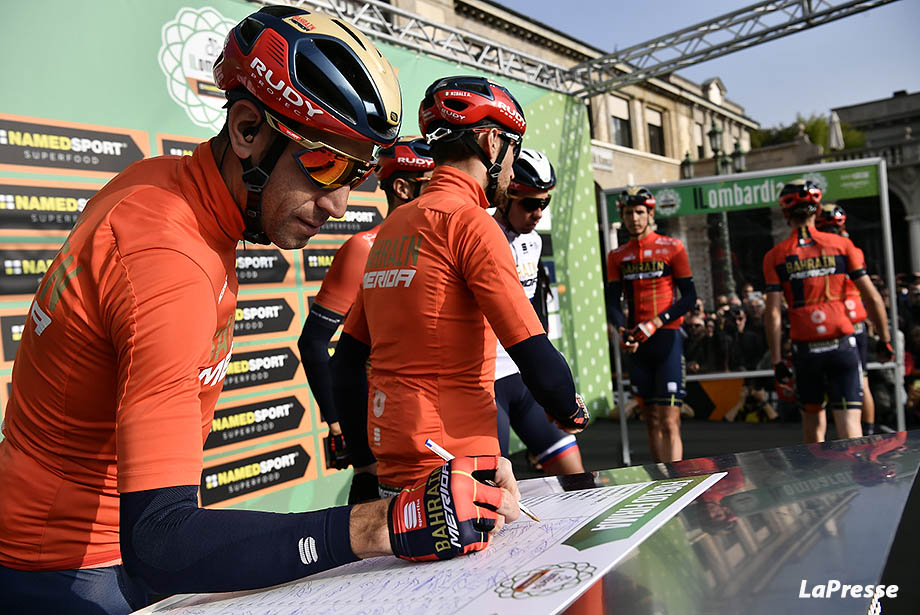 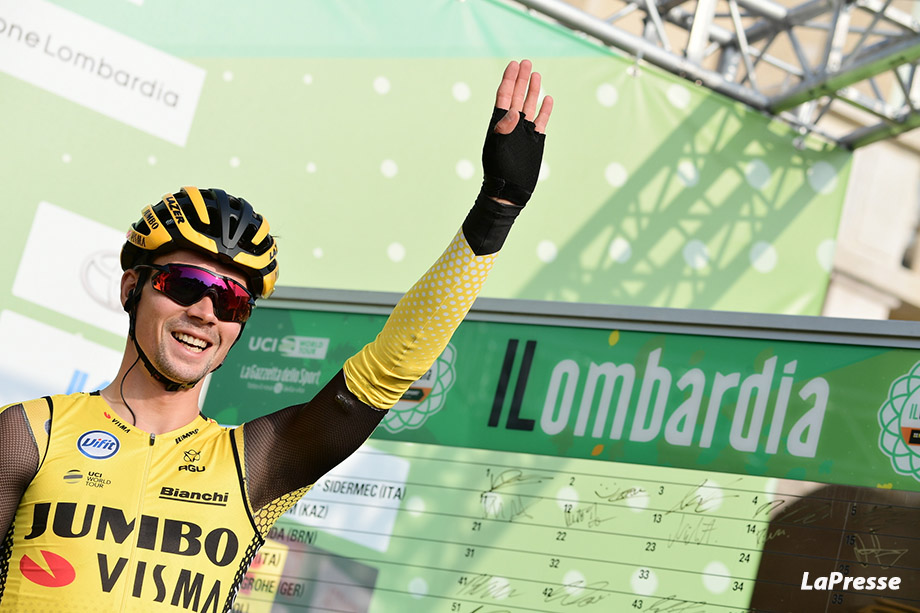 A wave to the fans from favourite – Promoz Roglic

The organisation had fitting tribute to a double winner of the Tour of Lombardy: Felice Gimondi. The Italian cycling legend from the Lombardia region died earlier this year of a heart attack. RCS Sport director Mauro Vegni announced that the upcoming edition of the fall classic would be dedicated to “The Buzzard of Bergamo”. Gimondi’s daughter, Norma, waved the start flag in Bergamo. 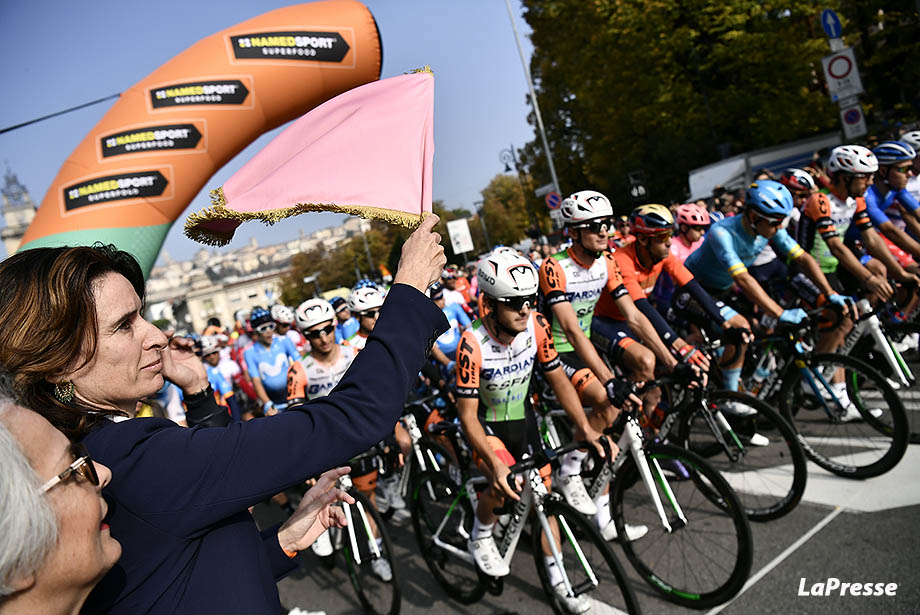 Norma Gimondi, daughter of Felice, gave the start to the 113th Il Lombardia 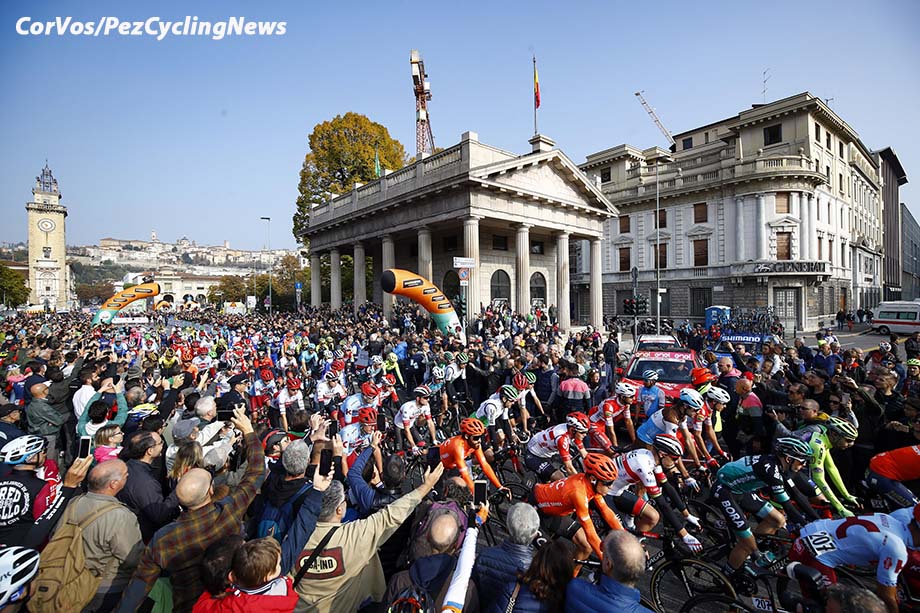 And they are away!

Strong leading group
It wasn’t long before eight strong riders formed the early break. Fausto Masnada, Davide Ballerini, Enrico Barbin, Rémi Cavagna, Cesare Benedetti, Toms Skujiņš, Marco Marcato and Petr Rikunov took the lead of more than 6 minutes In the peloton Jumbo-Visma led the way for their leader Roglič, the favourite for the victory after his rides in the Giro dell’Emilia and Tre Valli Varesine. The Dutch team managed to keep the gap under control. 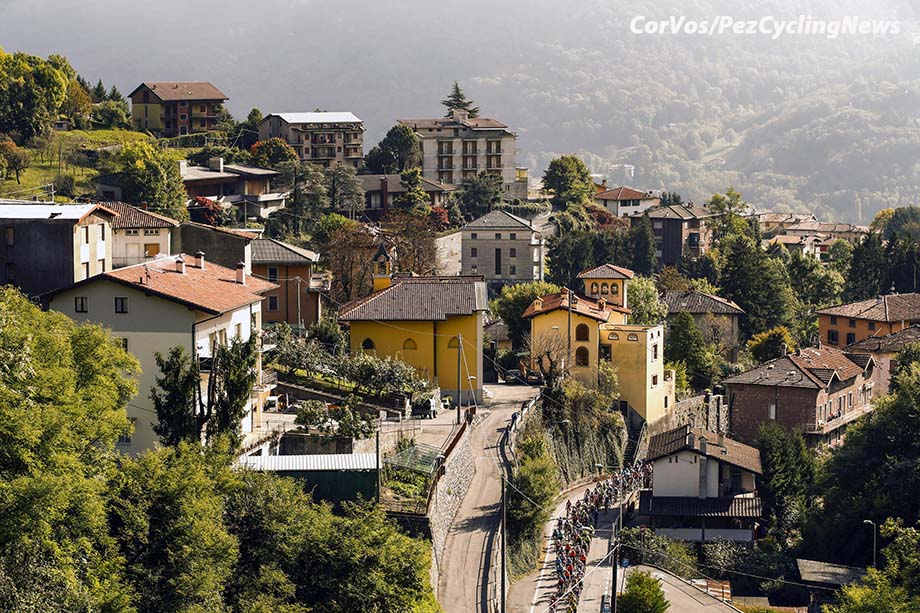 Toms Skujiņš was 3rd in Tre Valli Varesine, and Masnada and Cavagna won stages this year in the Giro d’Italia and the Vuelta a España. Davide Ballerini, winner of the European Games was also present. On the first two climbs of the day – the Colle Gallo and the Colle Brianza – the leading group stayed together, but the lesser riders were dropped before the foot of the famous Madonna del Ghisallo. Masnada, Cavagna and Skujiņš had the best legs. 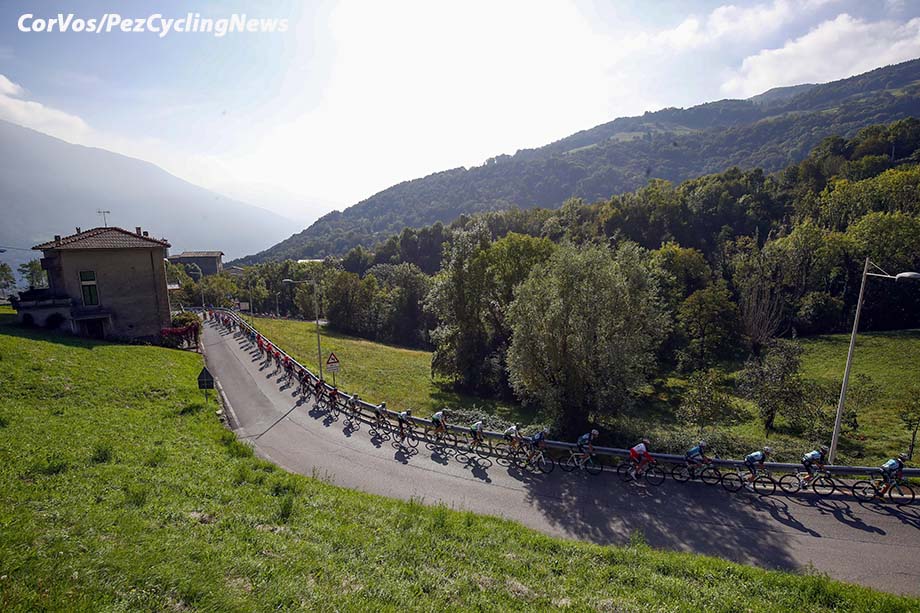 It was a fast start

Leading group splatters on the Madonna del Ghisallo
The Trek-Segafredo Latvian turned out to be unable to follow Masnada’s pace. The Italian from Androni Giocattoli-Sidermec was keen to show himself in front of his own people. It was more than 70 kilometres to finish in Como, but Masnada said goodbye to his companion Cavagna. His lead over the peloton had fallen to just under 3 minutes. 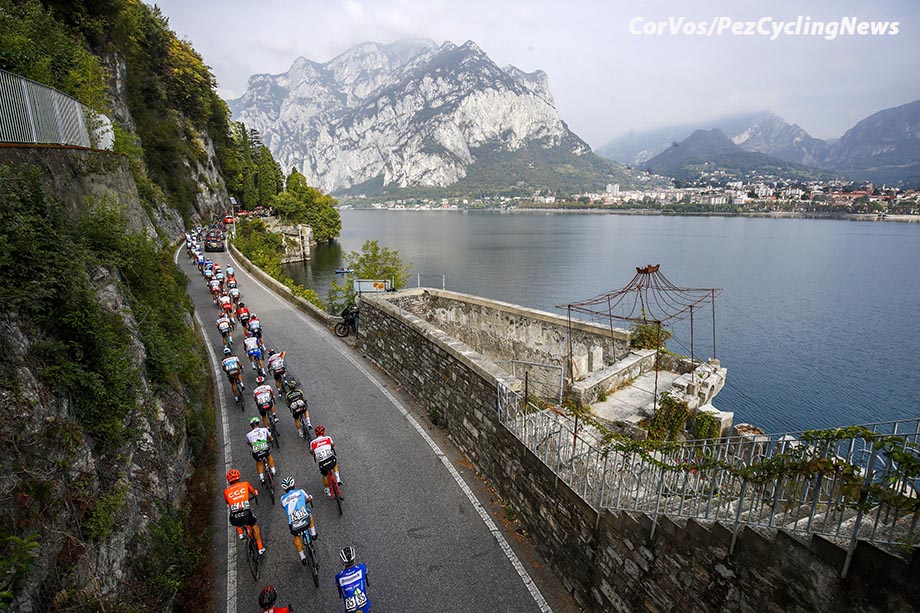 Jumbo-Visma were relieved by Ineos on the Madonna del Ghisallo. The British team was clearly working for Egan Bernal, the winner of the Gran Piemonte last Thursday. Partly due to the work of Salvatore Puccio, the lead became smaller. It was Masnada who first heard the bells of the chapel ringing on the top of the Ghisallo, followed at a short distance by Skujiņš, who had found his second breath. 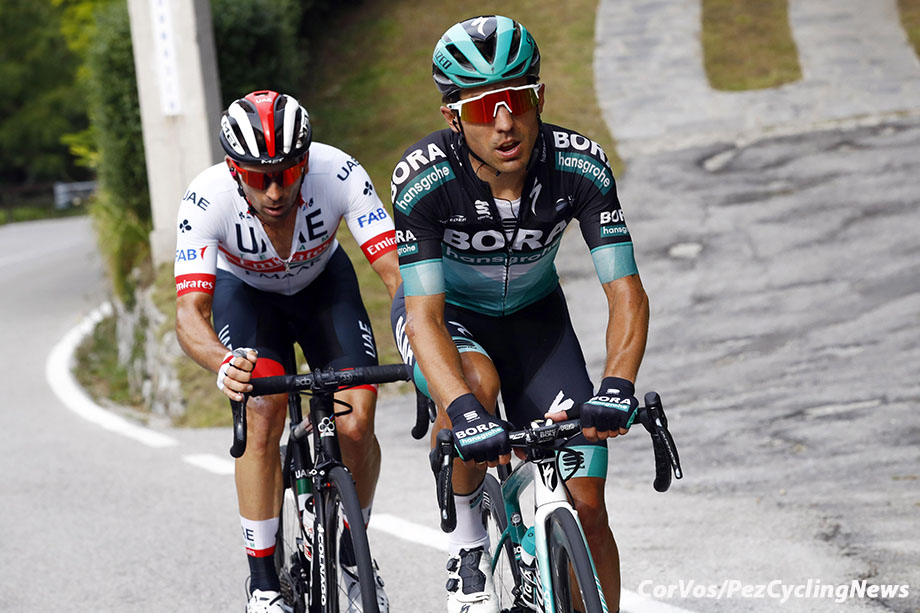 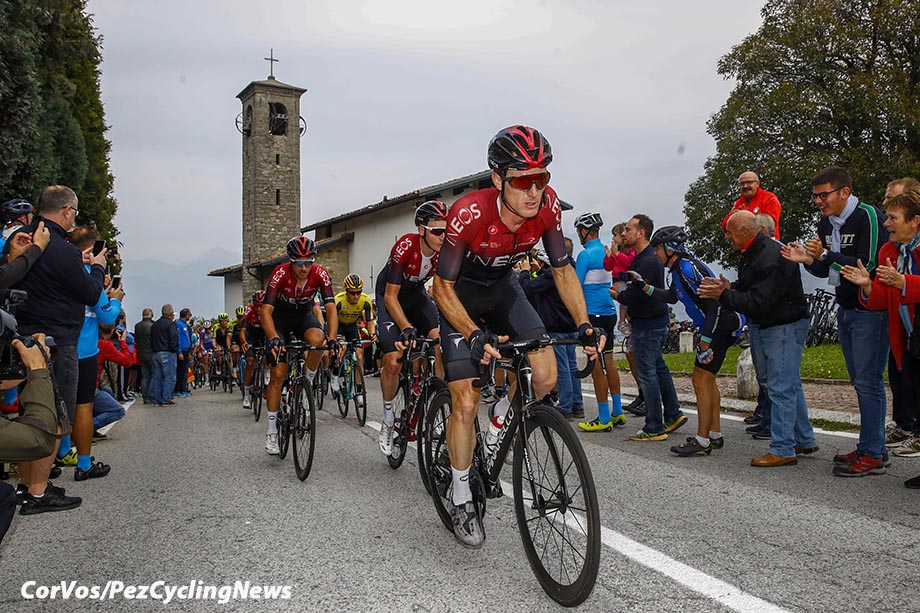 Ineos were in charge on the Ghissalo

Masnada and Skujiņš hoped to be the first to start the Muro di Sormano – with ramps up to 27% – but even before turning up the wall, the early break riders were joined by Jungels, who immediately went to the front to maintain a steady pace. This proved to be the death knell for Masnada, and Skujiņš, together with Jungels, started the steep Muro di Sormano. The lead had dropped to 20 seconds and not much later Skujiņš and Jungels was caught. 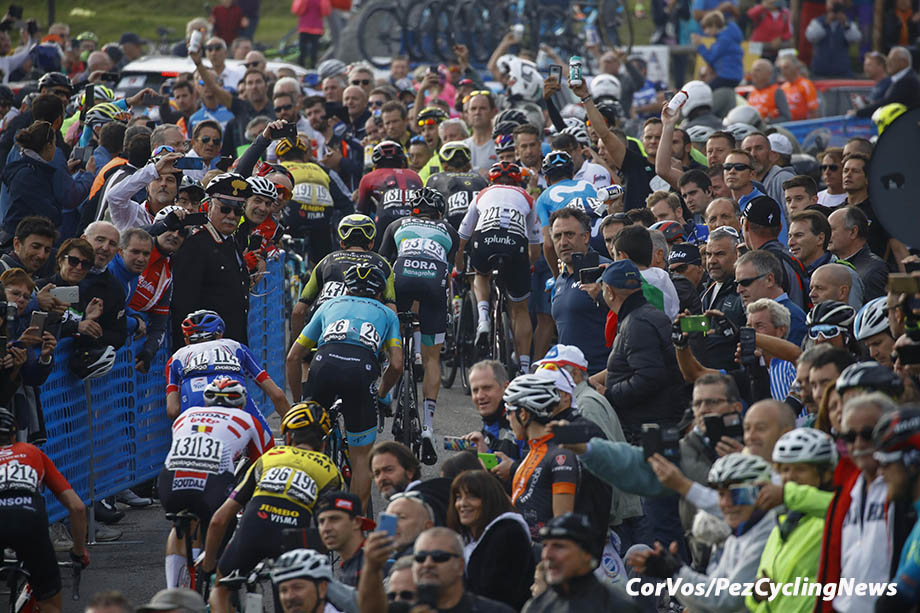 The Tifosi were out on the roads

The Muro di Sormano
Skujiņš and Jungels were picked up and left behind by a group of pure climbers: Rafał Majka, Iván Sosa, Giulio Ciccone, Pierre Latour, Ruben Fernández, but especially Michael Woods and Jakob Fuglsang. The presence of the winners of Milan-Turin (Woods) and Liège-Bastogne-Liège (Fuglsang) caused a counter-attack in a chasing group with promising Frenchman David Gaudu and double winner Nibali, Spanish champion Valverde and Roglič managed to reconnect after the top. 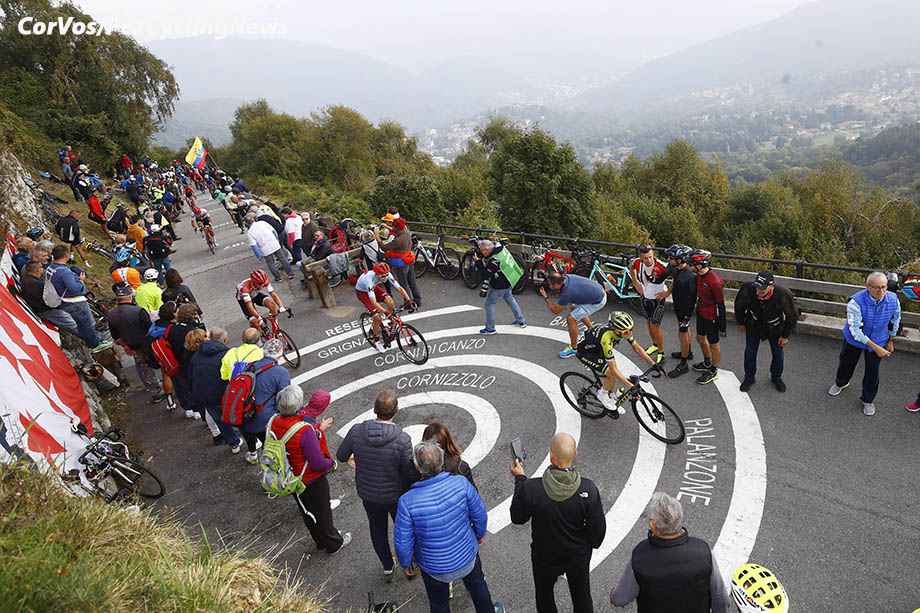 In the lightning-fast, technical and treacherous descent of the Sormano, a few dropped riders managed to return, including Tim Wellens and Emanuel Buchmann. The Belgian and the German decided to attack on the run-up to the Civiglio, the penultimate climb of the day. The two riders had one common goal and worked well together, which meant they quickly managed to grab 20 seconds on the chasing group, where Sepp Kuss was working for Roglič. 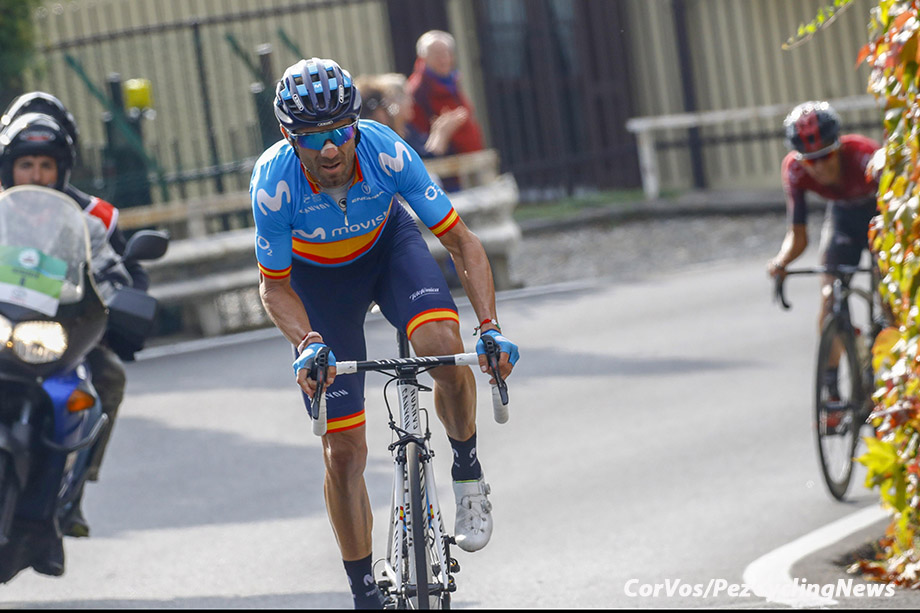 Maybe Valverde should have chased Mollema

No third victory for Nibali
In the second group, where Kuss and Fernández set the pace, so there was no slowing down, but nevertheless several riders – including Robert Gesink, Tiesj Benoot and Diego Ulissi – rejoined. With more than 20 kilometres to go, Wellens and Buchmann were the first to start on the steep sections of the Civiglio (4.2km at 9.7%), the chasers were at 30 seconds later. At the front Buchmann proved to be the better climber, but that wouldn’t help. 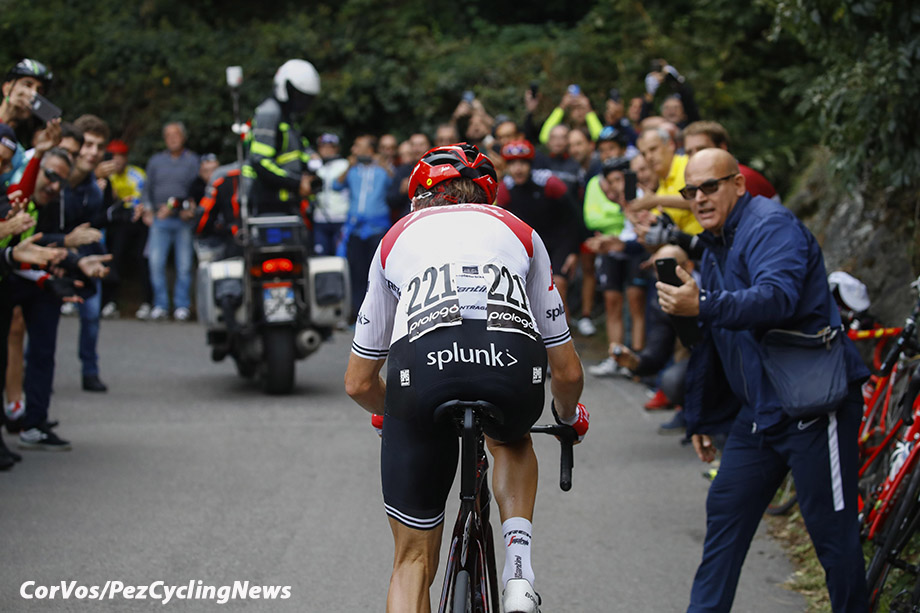 Trek-Segafredo have had a good autumn

In the favourites group; Valverde gave a signal to Fernández to give it a go. The acceleration from the Spaniard was impressive, so impressive that Nibali had to drop out. The winner of 2015 and 2017 would not write a third victory on his palmarès. A few hundred meters further on, Tour winner Bernal was also in trouble after an acceleration by Valverde, but the Movistar leader was brought back by Woods and Gaudu. This turned out to be the ideal moment for Mollema to make his move. 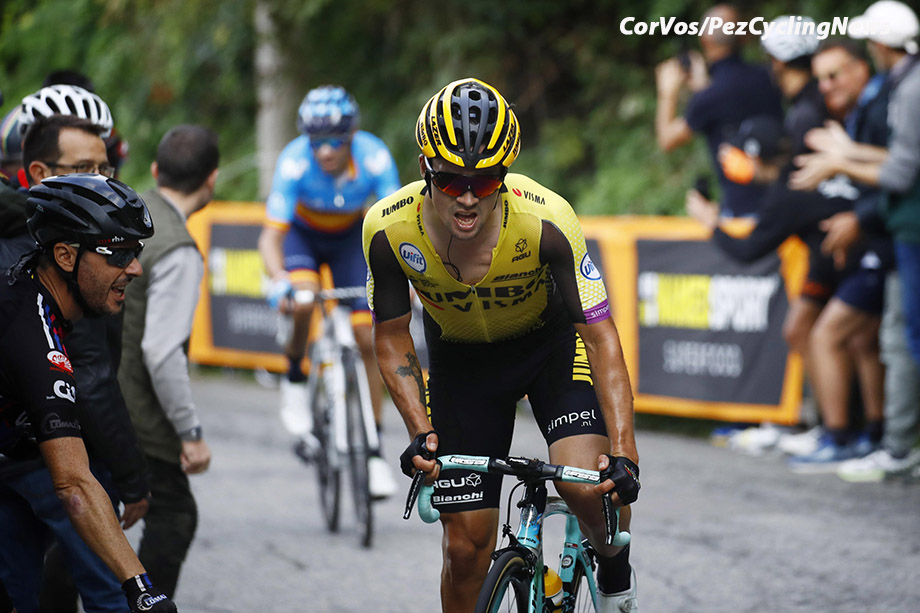 Roglic was the top favourite, but…

The Trek-Segafredo rider, unlike Valverde, was allowed to go, and soon managed to build a nice gap. In the chasing group, they looked at each other, which was all in favour of Mollema, whose lead fluctuated around 20 seconds. The Dutchman was the first to hit the Civiglio, followed by Latour at 15 seconds, while the Roglič-Valverde-Bernal group was at 30 seconds on a strong Mollema, who no longer looked back. 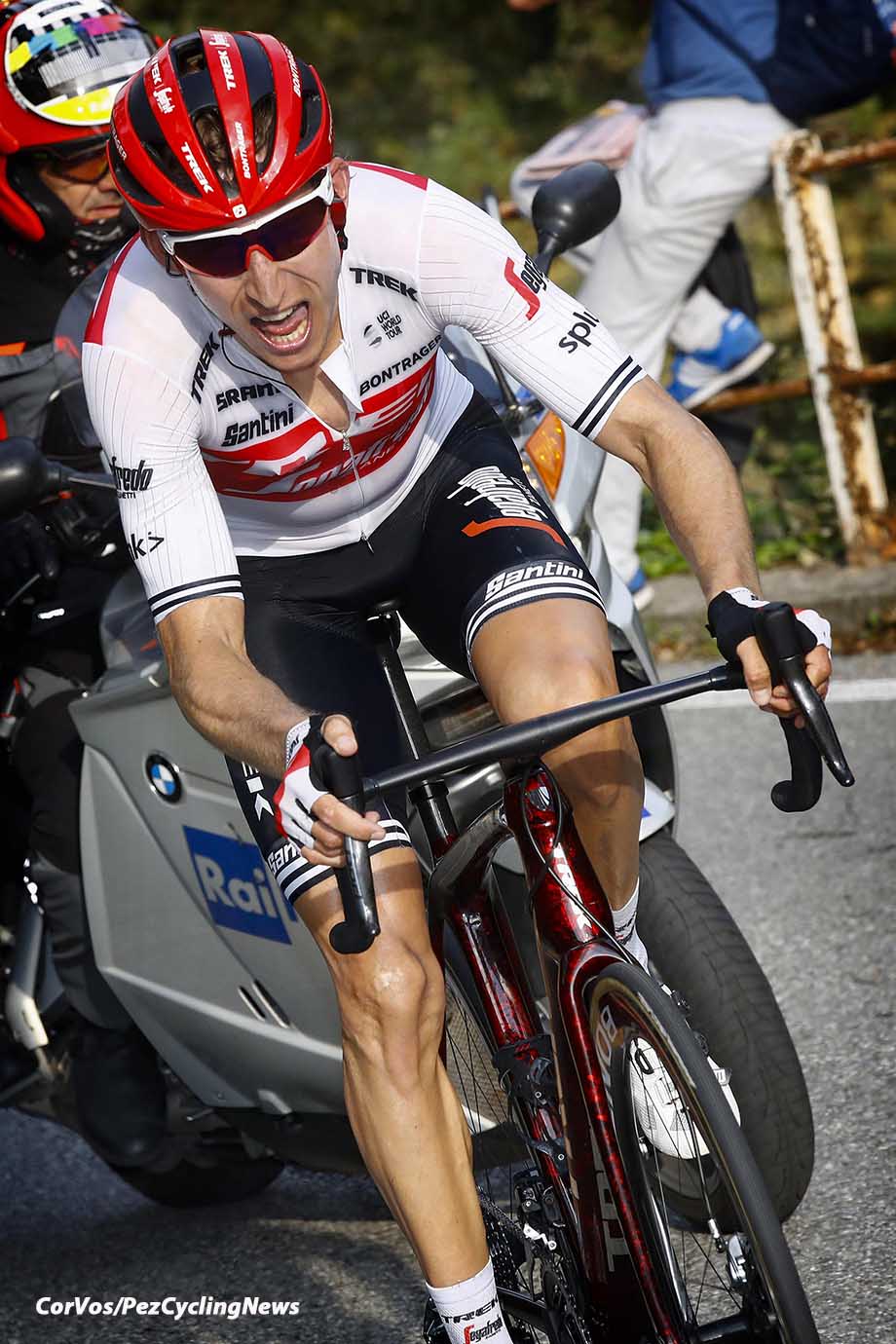 Mollema was not going to be caught

Mollema was at ‘full gas’, while the pursuers were not prepared to put their hand in the fire for each other, which led to a difference of 45 seconds. Mollema looked to have won, but then came the long-awaited acceleration from top favourite Roglič. The Slovenian attacked and the others had to watch him go. We now had a duel between Mollema and Roglič on the San Fermo della Battaglia. 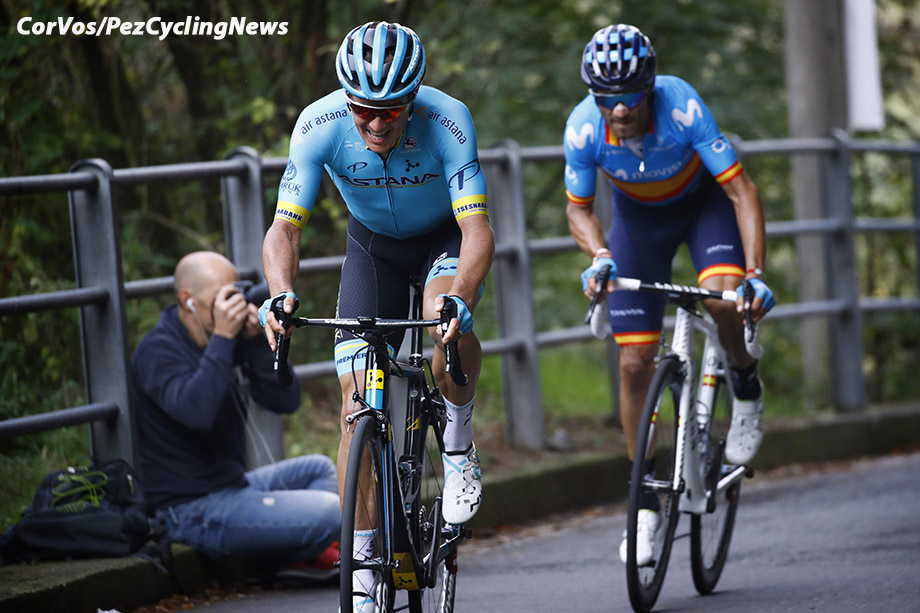 Fuglsang, Valverde and the others left the chase too late… or couldn’t

Roglič came within half a minute of Mollema, but the Slovenian locomotive suddenly ran out of steam, and the lead continued to fluctuate around that half minute. Just before the summit, Roglič was joined by Valverde, Woods, Fuglsang, Bernal and Jack Haig, while Mollema had started the short but rapid descent of the San Fermo della Battaglia. The Dutchman still had to survive 5.4 kilometres and hold off Valverde behind. 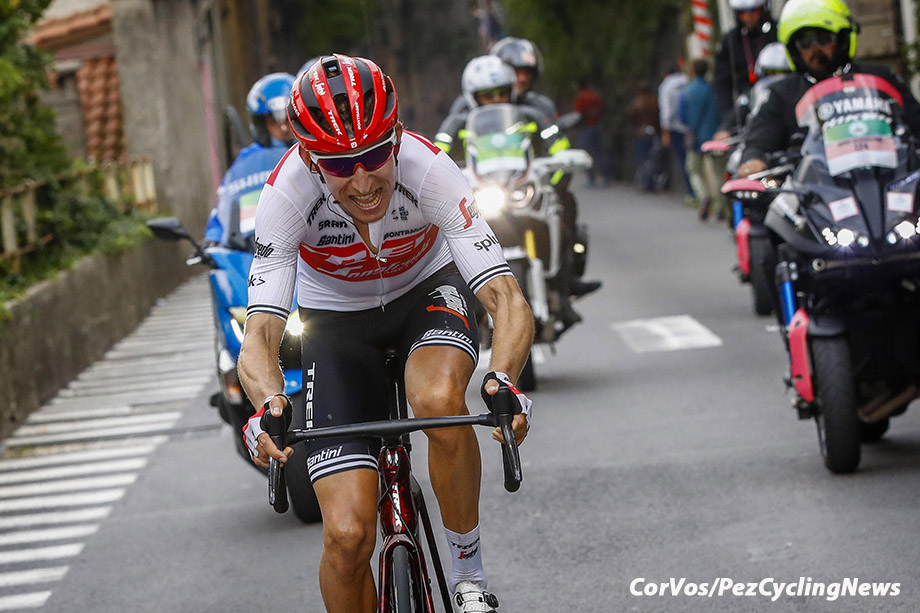 The difference between the two turned out to be too large, as a result Mollema convincingly soloed to his first victory in a monument. For the Trek-Segafredo rider it is probably the biggest win of his career, after a stage victory in the Tour de France and the win in the Clásica San Sebastián. Mollema had plenty of time to make his victory salute and to thank the Tifosi. Valverde jumped for second place, ahead of Bernal and Fuglsang. 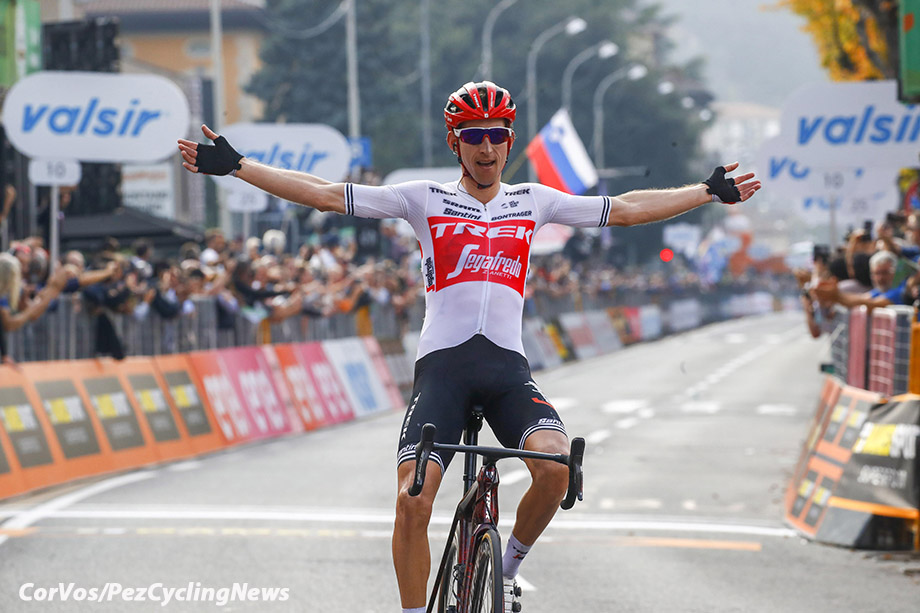 The big win for Mollema

Race winner, Bauke Mollema (Trek-Segafredo): “I can’t believe it. I knew I had to go on the Civiglio. On the Civiglio, riders who had more explosiveness attacked. When it came to a halt, I knew that the moment was there. I felt good all week, I could continue to kick. I knew that I had a good chance of winning the moment I had twenty seconds. I knew the descent of the Civiglio well and the pursuers could not go much faster. In the last ten kilometres it was full to the finish. I didn’t start as one of the top favourites, but I felt good all week. I had to wait for my moment.” 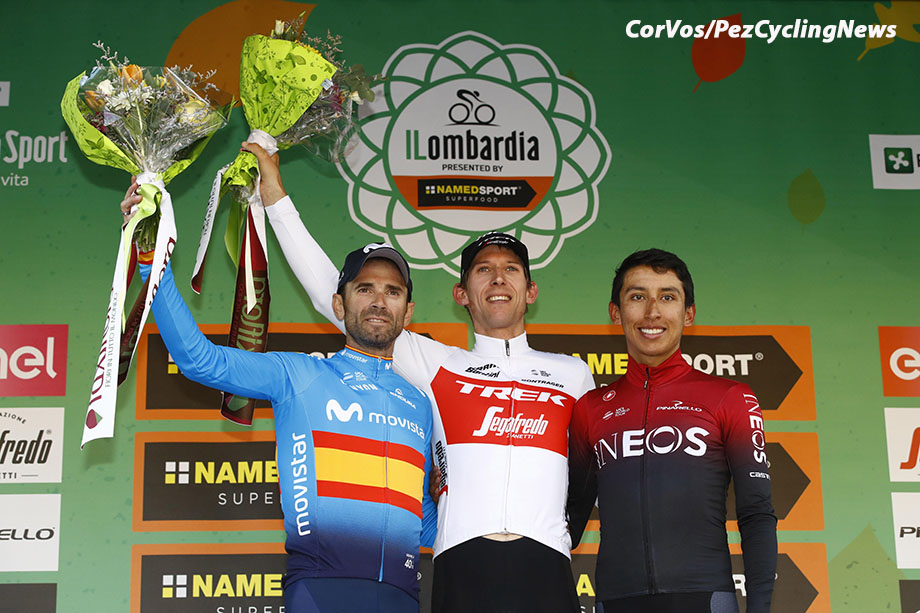 The top three in Lombardia