Roadside St.1: There’s a scene in American Beauty where Ricky films a plastic bag dancing in the wind, swirling along streets, between buildings. It’s the most stunning thing he’s ever seen. On our wander around the Giro prologo course in Herning, the leaves are doing their own furious ballet. It’s a chilly and gusty start. Maybe just one blast of wind will make the difference between victory and not close enough?

A quick trip to the Rema 1000 sets us up with snacks for the day, and we’re on the road to Herning for stage one. It’s an 8.7km burn-up for the fast men, and there could be a few overall contenders feeling sorry for themselves if that wind howls this afternoon. 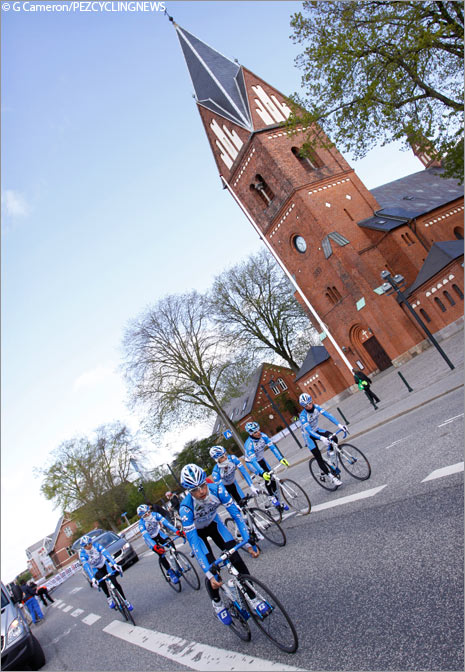 There’s a huge fun ride taking place through and around town with both hardcore routes and family friendly loops on the TT course. The pros are tagging along for an early-morning look at the corsa and the Herning church is looking lovely. 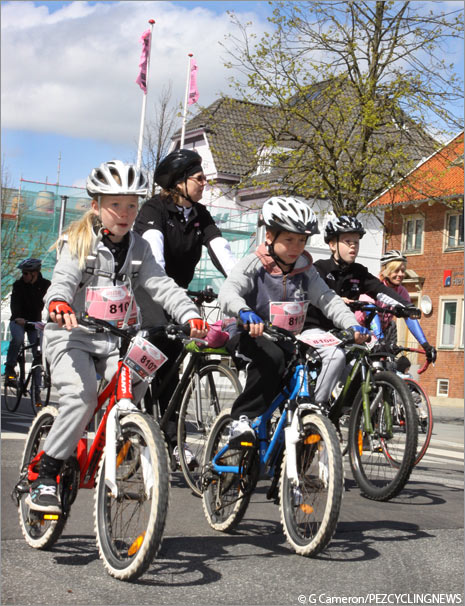 Everyone is welcome to participate, and everyone is having a good time. There are all abilities, from serious amateurs to a couple of ladies with visual impairments being guided around. It lifts the spirits that Herning is investing so much in promoting the bike, both in deed and with hard cash. We spend the rest of the morning drifting around, savouring the scent of roasting chestnuts and out-of-sight barbecues. 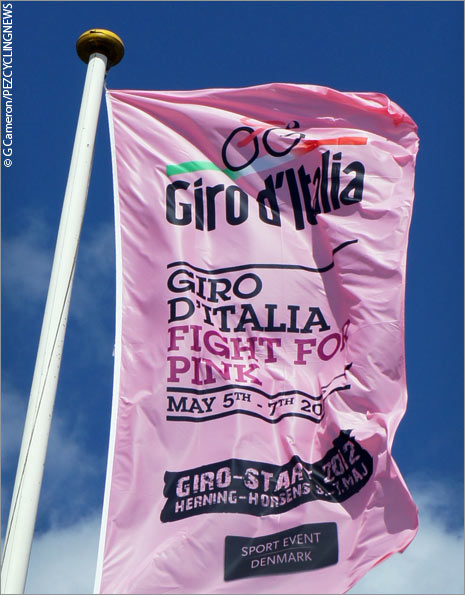 The wind is getting restless. Little dust clouds spin, the Giro flags high above alternate between thwack and flop. It’s clearly going to be a day for the strongest of the strong. 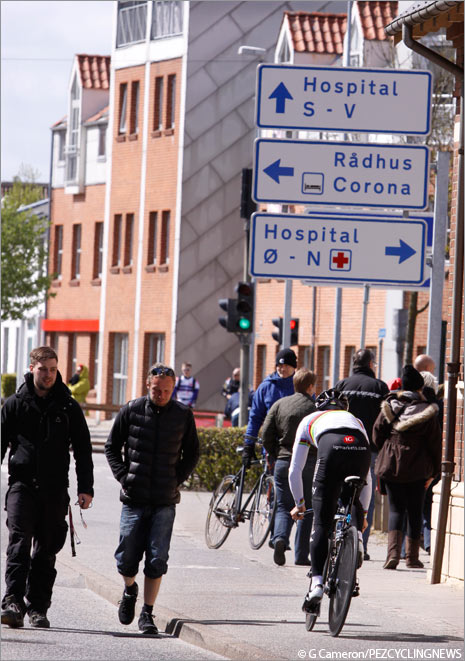 Afternoon. Course testing for the riders. Cav steams towards us but the previous team car is going too slowly for him to take the corner as he wants so he simply slams on the brakes, whips round and no-one bothers him as he disappears down the pavement to try it again. He’s wise too – the course is not as easy as it looks. It’s flat, but there are lumps, bumps and the odd rut on the surface. 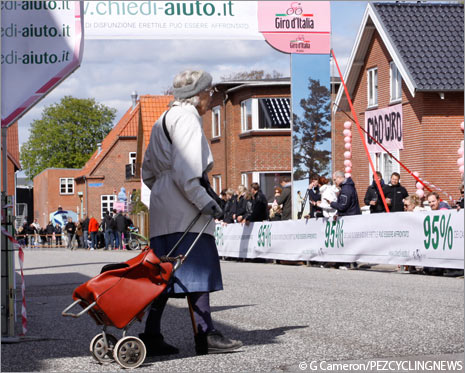 Race time approaches. The public just don’t seem to turn out in the numbers expected. We’d heard predictions of massive crowds, but there were key sections of barriers unattended. Great for us, made our job a little easier for once! 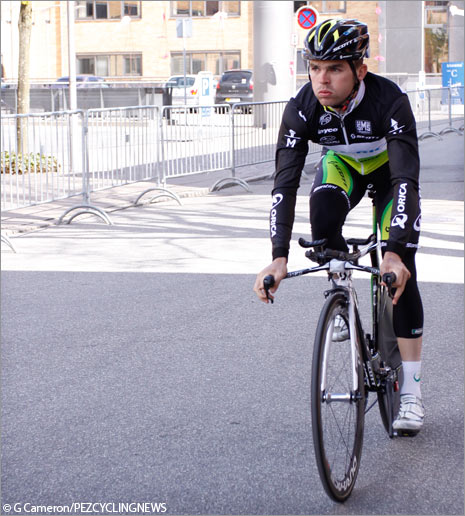 There is no one in sight when Jack Bobridge (not to be discounted as a possible winner according to some authorities) tests out the course. 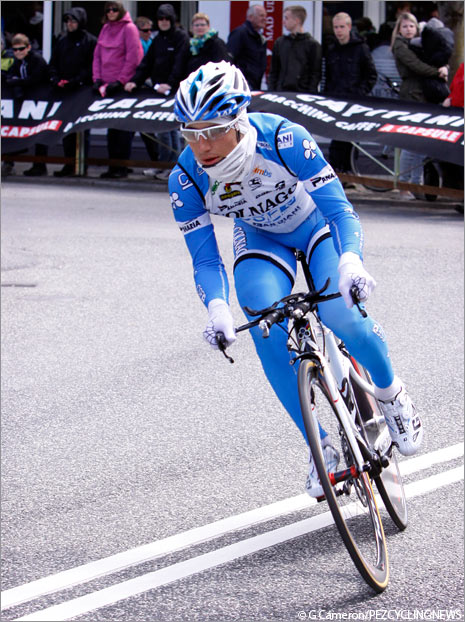 The riders are trying to keep toasty warm and there won’t be much milling around outside team buses this afternoon. We meet a couple of Norwegians who are so amped that they’re hammered by 3pm and will probably be sleeping by the time the race starts. 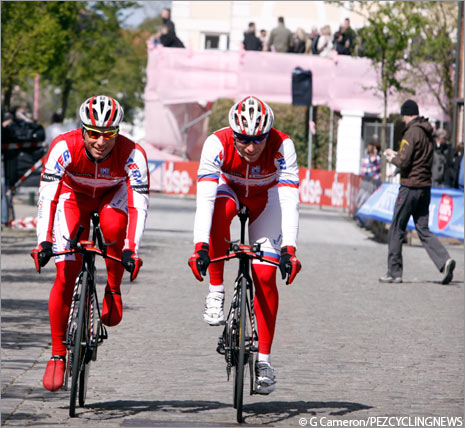 The riders continue their recon with varying degrees of focus and some fans seem totally disinterested, ambling across the course without a care in the world. 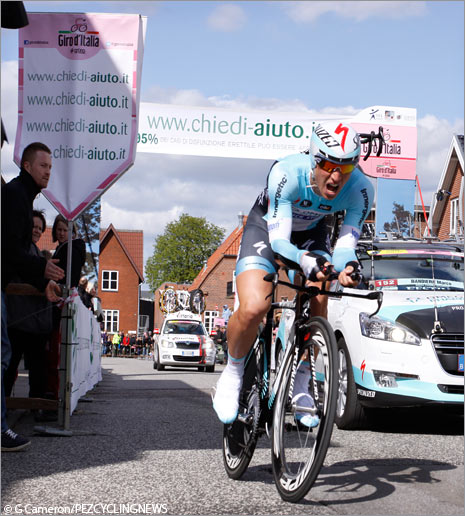 Jackson Rodriguez is first off for 2012 and the flood gates open as Marco Bandiera rips past having eaten up most of the minute he started behind the little climber. 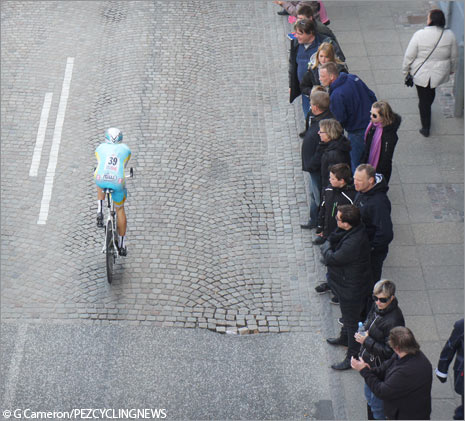 Through the main thoroughfare and riders zip over cobbles and past the big screen at the Kongress Center. We opt to make a coffee stop and the warmth inside the press room makes us think that the journalists watching indoors have the right idea. 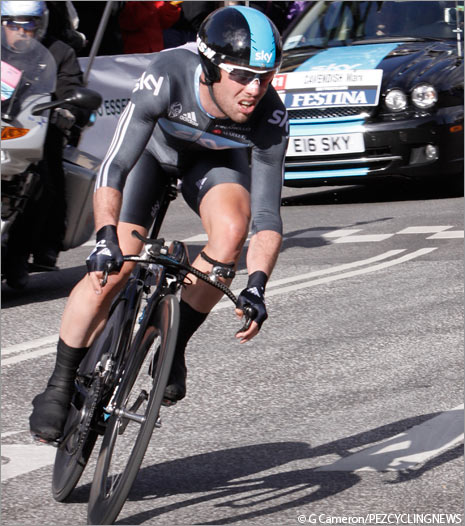 Back outside, we see Brett Lancaster looking pretty close to his prologue-winning form of 2005; Marco Pinotti looks good; a glimpse of Gustav Larsson as he hurtles between buildings. Mark Cavendish, in his normal Sky TT gear catches out the unwary. 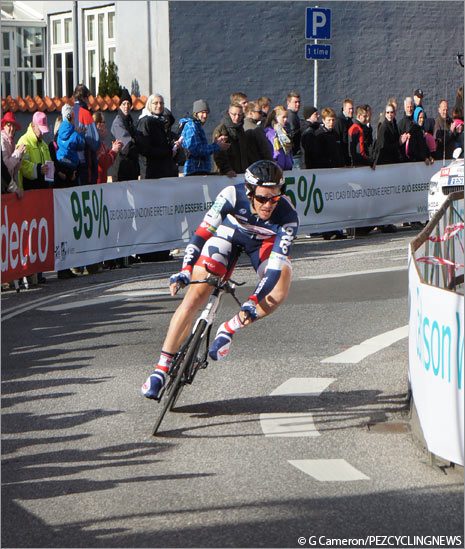 It’s gone six o’clock when Adam Hansen zips into view. The sun spears the streets for a moment before diving behind clouds. The riders flee in and out of light. Fans squint to see who’s coming. 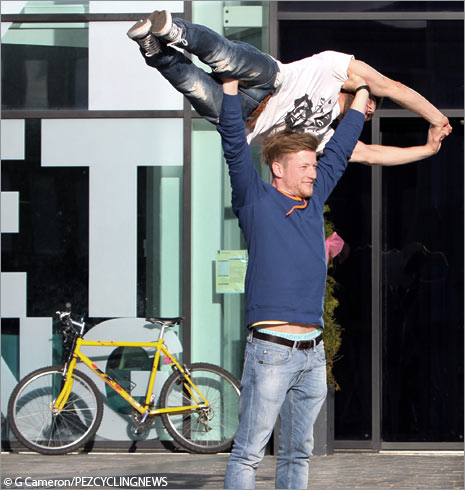 The course loops around and back on itself so many times, it makes it easy to catch the riders at all stages of their efforts. The public is also making strenuous efforts although it isn’t entirely clear why. With the world’s second-biggest bike race just yards away, maybe there really is more fun you can have? 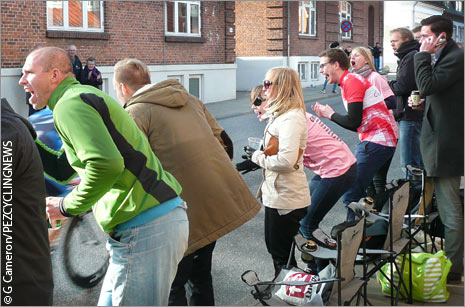 Some fans roar for everybody though, and seem genuinely into the whole moment. It doesn’t matter which team or which nationality blurs by. The affection for the race raises the temperature at least a little. 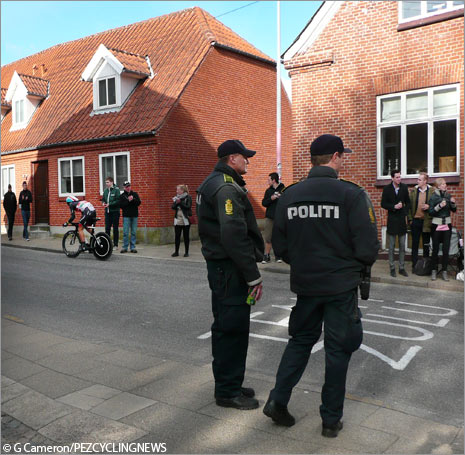 Nelson Oliveira goes through. The local law enforcement keep a casual eye on things as the riders start to flick past, two minutes apart now. The real big boys are up next. 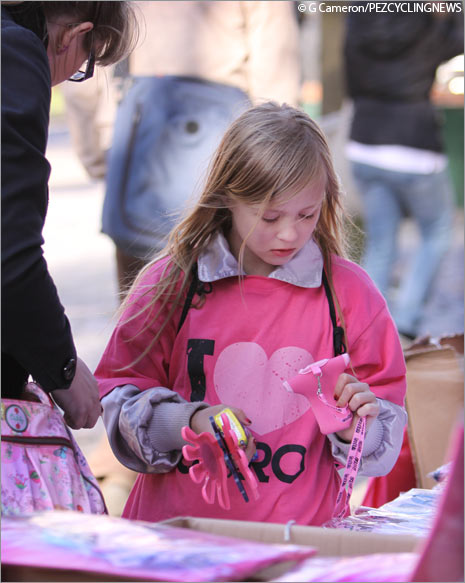 We look for a new angle and cut away from the route, up Шstergade and along Bredgade. The souvenir stalls are doing a roaring trade and offer proof that you just can’t have enough pink. Some kids have had enough for the day and haul desperately on their parents’ hands. That reminds me that we’ve still got to go and work out our pictures for the day, get typing and then figure out our dinner stop for the night. 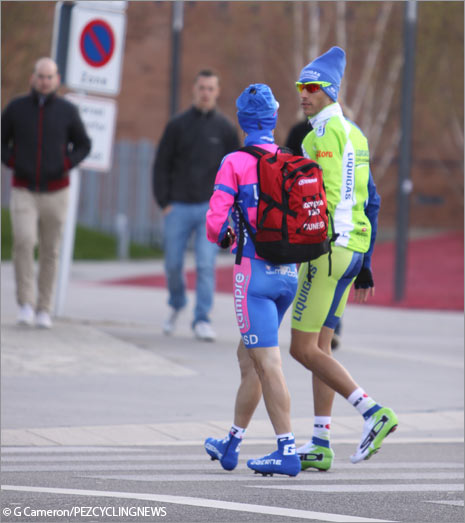 We wander back towards the press center, and it seems Liquigas and Lampre share a mutual dislike of the cold, a mutual distrust of pedestrian crossing while wearing cleats, and a mutual interest in Danish blondes. It would have made the teeter up the steps a little less terrifying, I guess. 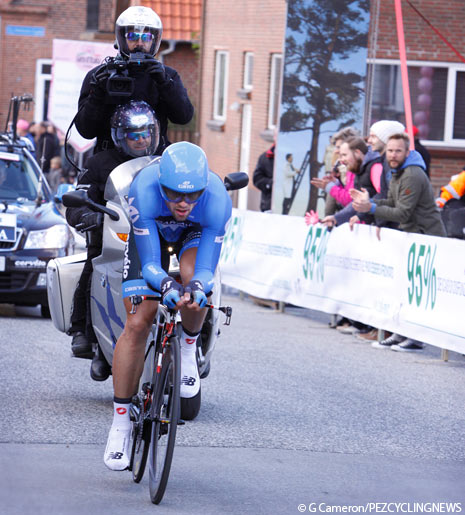 One last detour back to the course, and we know by the approaching swell of noise that Alex Rasmussen is near. The police politely tell everyone to get back but it makes no difference. The roadside bursts into life blue as SaxoBank blue flashes past. Only nine riders to finish now … it’s getting really cold.

I exchange knowing nods with a couple of well-appointed fans. Hopping from foot to foot, we’re on a shared, speeded-up penguin shuffle to keep the blood flowing. We scuff-jog past each other a few times, hands in pockets. One spots my pass: “Sorry … for the weather. This is Denmark, I should have known to dress better myself!” 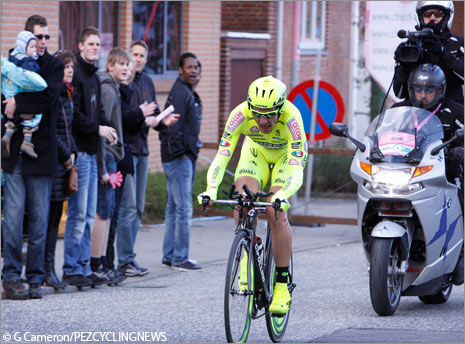 By the time Pippo Pozzato streams past at the back of seven o’clock, my hands stop working properly and I’ve seen the error of my ways. Outside the door to an apartment block, I’m more or less reduced to whimpering like an abandoned pet. It’s so cold … even the police on roadblock duty are suffering. 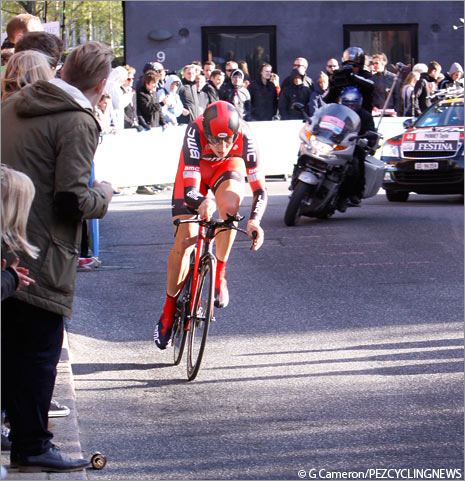 That makes Taylor Phinney’s ride, and his first Maglia Rosa, all the more impressive. We’d seen him scream past earlier and he was on a mission. He said he was on the verge of a life-changing result and he got it. Congratulations to him. He was ready for his chance and he took it. He rode like the wind. Tomorrow he’ll need to take the shelter of his team to keep hold of the jersey.