Roadside: They say the Swedes regard the Danes as pretty freewheeling, a bit devil-may-care, up for a party. You could say a few nations think that of the Italians, too, so maybe this Giro opening is a marriage made in pink-clad heaven. Either way, the security is nowhere … and I mean nowhere … near the level of the Tour. Everything in Herning is perfectly well organised, but has a much more relaxed air than the usual events in July.

The riders are due to arrive at the Kongress Center for their parade down towards Herning’s town square, and everything is going pink. Kids’ hats, old ladies’ jackets, shop windows, all manner of accessories. It’s an impressive show. 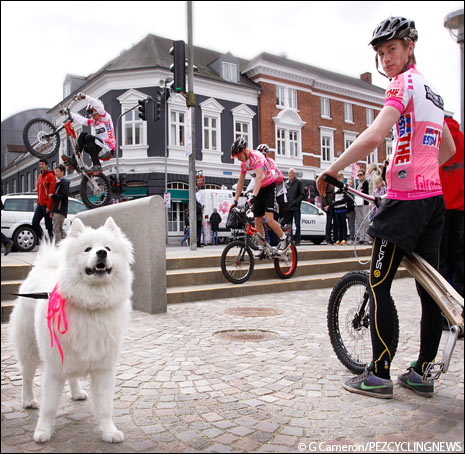 Budding entrepreneurs must have made a fortune retailing pink paper and fabric this last month or so as Herning has thoroughly embraced the Giro. There are expectations of 250,000 in town for tomorrow’s prologue but it’s not quite that jumping today: the teams’ presentation is being held at 4pm on a work day, but still … it gives the locals a further chance to strut their stuff. 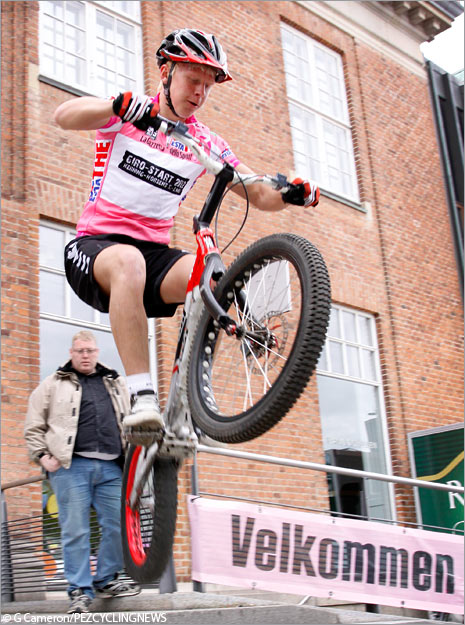 The only thing the Italo-Danish alliance failed to organise was for the weather to stay warm. 23 Celsius yesterday … 9 above freezing today. The kids waiting to lead the riders on their parade are starting to shiver. Maybe they should have been cosy inside and called at the appropriate time? 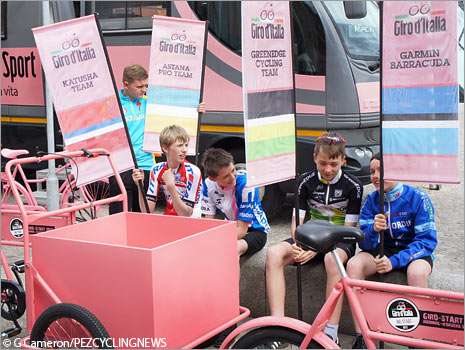 Eventually, the call to action comes. Vacansoleil draw the lucky straw this time: first on stage, and then first back to the team bus. They’re rolling into town bang on time. 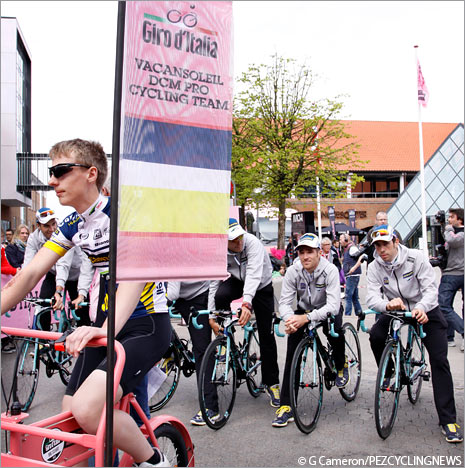 Before they leave, I catch a quick word with time trial ace Gustav Erik Larsson, a Giro stage winner in 2010. The genial Swede admits that immediately before a Grand Tour is not ideal for preparation. “I feel alright. It’s hard to feel too much because when you don’t really do that much training in the last week (before a Grand Tour), you feel a bit bloated. You don’t feel that good but hopefully tomorrow I’ll be fine.” 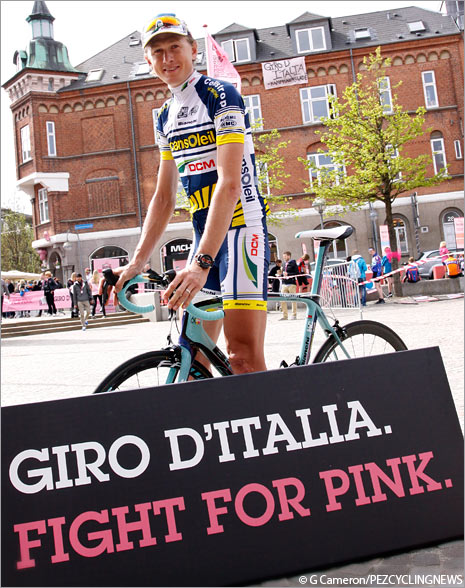 He reckons Thomas, Phinney and Rasmussen will fight out the prologue: “Those are the bigger favorites on a course like this, but if it would be a little bit hillier I’d be in with a shot.”

FDJ’s Jussi Veikkanen is also in good shape, looking for a breakaway if the chance arises, but has other responsibilities.

“We have two good leaders here (hotshot sprinter Arnaud Demarre and GC contender Sandy Casar). We’ll build the Giro around them. I was in Romandie just before coming here, so I hope the form is OK here.” 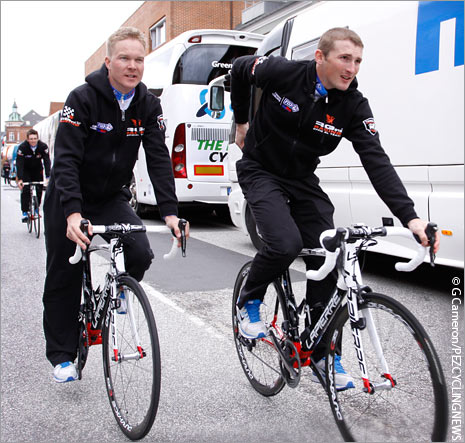 “Last year was just like a survival camp more than a bike race!”

And racing (relatively) close to home?
“In Scandinavia, it must be the biggest race ever. I haven’t seen many Finnish fans yet, but hopefully they will be here. There were a lot of them for the Worlds.” 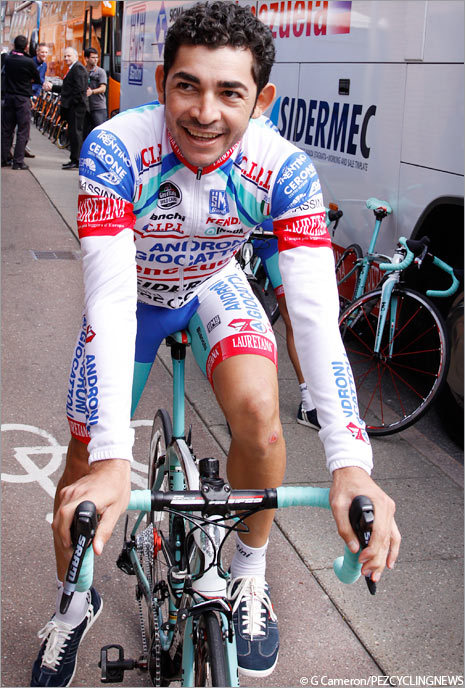 The Androni-Giocattoli squad look super-excited to be here, beaming from ear to ear as they bounce off their bus. Cool hair, cool kits, and an intriguing team boss. 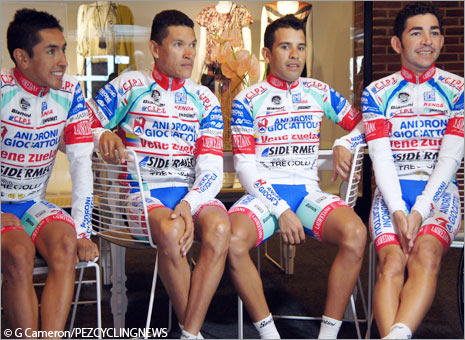 It’s time to abandon the Kongress Center, and take the back route to the main presentation stage. Nobody seems to mind much as we wander through the security barriers and down in front of the stage. There’s a whole lot of movement as two parties of models collect the bikes from the riders and wheel them stage-right for post-presentation uplift. An Orica-GreenEdge rider politely thanks one girl; she and her colleague check him out before exchanging perfectly arched and approving eyebrows. 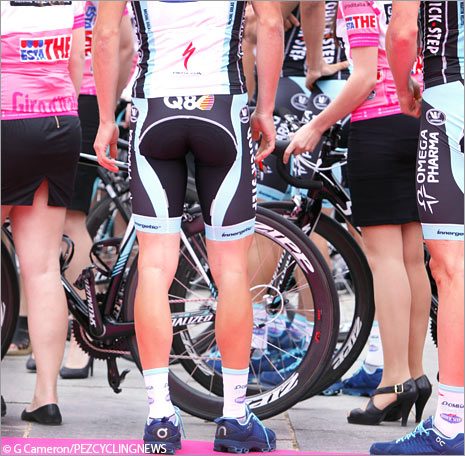 But the girls waiting to hold the bikes look so cold after an hour that they’re struggling not to show that it ain’t cosy out there today. It seems a little harsh when OmegaPharma-QuickStep come off stage and immediately pull on warm clothes. Ag2r-La Mondiale even had co-ordinated jackets and scarves. Impressive. 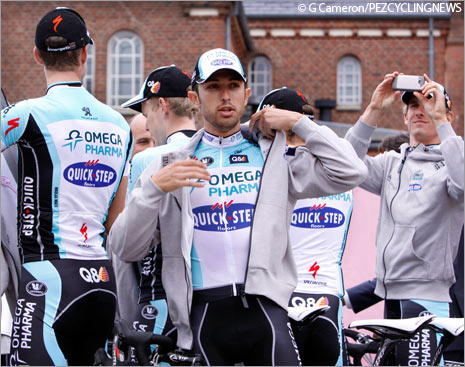 The erstwhile Saxobank star Frank Schleck gets a huge cheer as he takes the stage for RadioShack-Nissan-Trek, and speaks approvingly of his time with Saxobank. He’s less forthcoming on his chances to win the Giro, though. 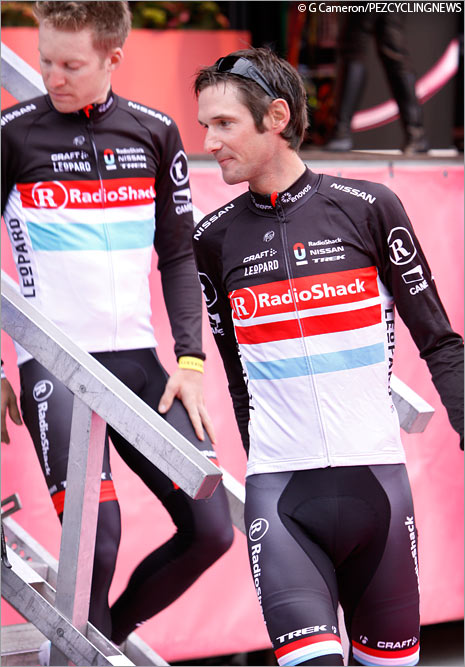 He gets a straight Yes/No question to respond to, but expertly pings it back over the net with a practised: “Ask me in ten days and I’ll be happy to answer you then!”

The biggest crowd favorite by a long way is Garmin-Barracuda’s local boy Alex Rasmussen. Despite stitches in his chin and scrapes to his cheek, he’s a red-and-white hot favorite for the prologue. 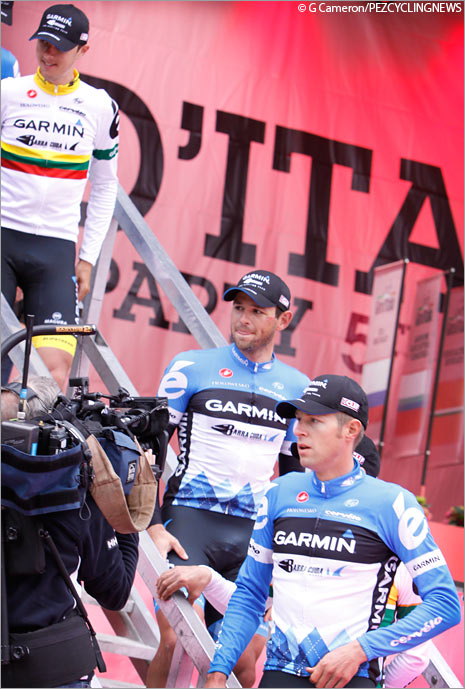 If he wins, the boost for Danish cycling will be massive. There’s a lot of interest in him, to the point that sprint star Tyler Farrar can simply wheel away unmolested as Rasmussen takes his turn in front of the TV cameras. 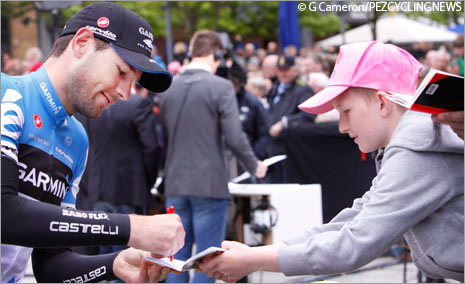 The fans are hanging eagerly over the barriers, and he obliges as many as he can realistically manage. He could have been there all night by the look of it. 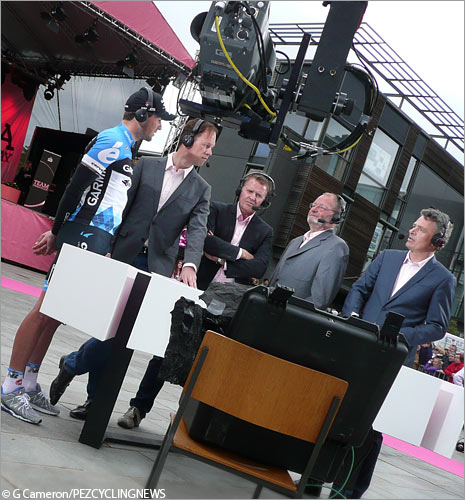 There’s one boy who catches the attention of ourselves, and then the TV crews once Rasmussen has signed his book. It’s beautifully covered, a mini collage of team logos and racing scenes, and reminds me again of what it is to love something so completely, maybe before the sometimes brutal reality settles in. I hope he hangs onto what that little autograph books means for a long, long time. 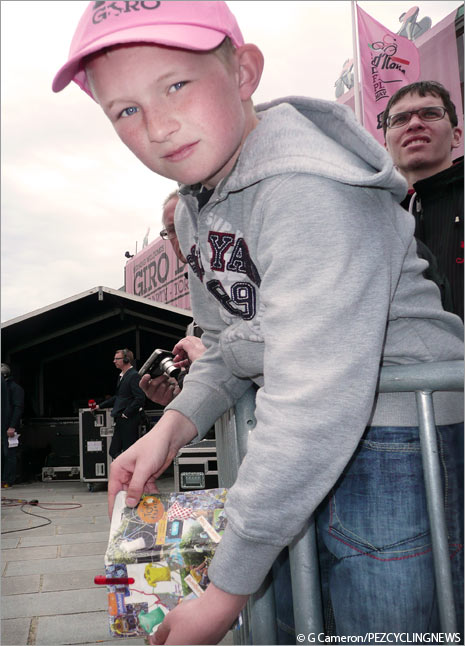 Team Sky roll through and Mark Cavendish gets a huge cheer even before his interview. Having won the Worlds here last September, he is genial diplomacy personified as he bigs up Denmark. 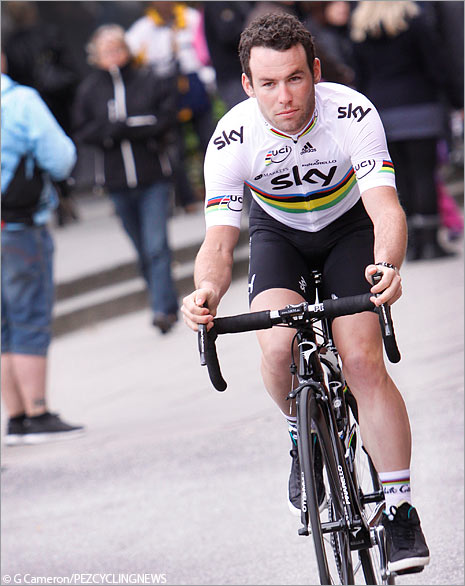 An old hand has joined the team at the last gasp, as Jez Hunt rolls out with the squad for the Corsa Rosa. He only arrived a few hours ago and he’s already got his ‘many-years pro’ race face fixed firmly in place. 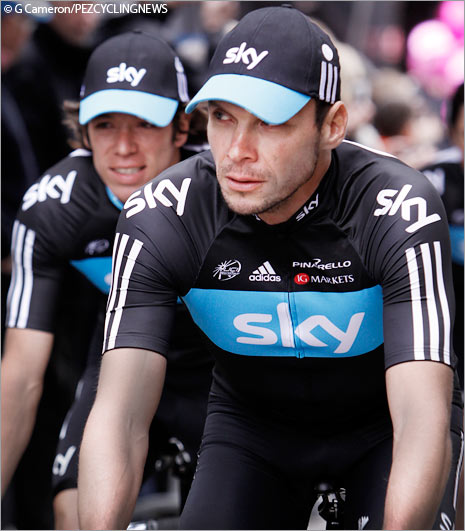 The temperature is starting to drop further as the wind gets up, and it’s time to turn back towards the press room. 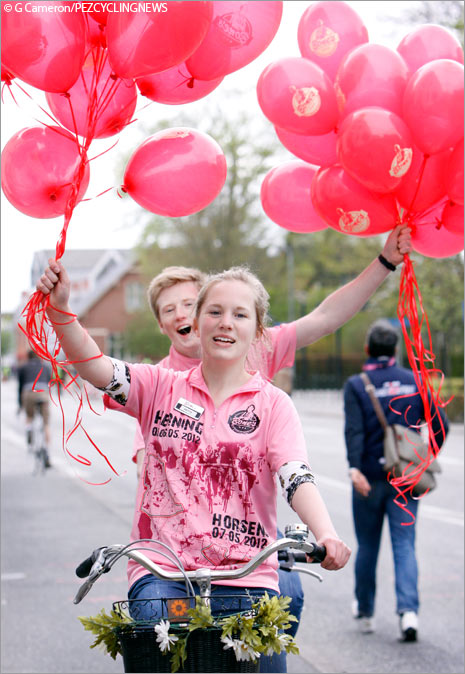 The locals are gleefully handing out Giro freebies (by bike, of course) and everyone’s in a good mood. It’s just a nice atmosphere to hang out in. No pushing, no shoving, no bad tempers. 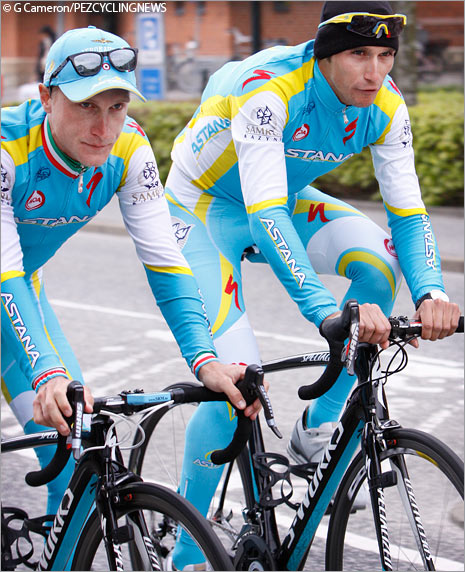 Amstel Gold winner Enrico Gasparotto and his team leader Roman Kreuziger swish past on the short hop to their hotel, and the Czech is taking no chances with his health. He’s bundled up like a mummy as he pedals all of one kilometer to the safety of his room. 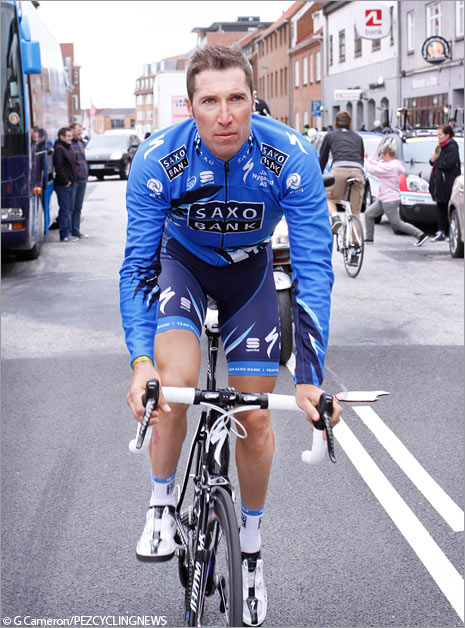 The home heroes SaxoBank are last up on show. They’re beaming a pointed anti-doping message, read by Anders Lund, on the big screen as we arrive back at the press center. Within moments, they come barreling back to their team bus, before performing an abrupt 180° and heading just down the road to their hotel. 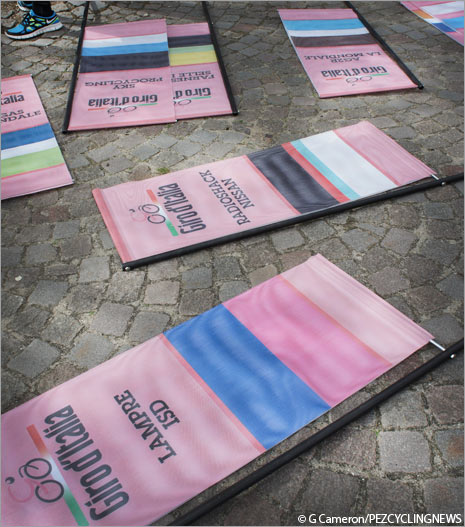 The presentation and pre-race flim-flam is done. Tomorrow it’s all business, Giro style. Join us for the prologue.