Roadside St.13 Dave gives me the lead out, past Ag2r, past Renshaw, past Brown – and there’s Cav ! I’m up to him, past, elbow the guy to my right and snap, snap, snap ! We got the Cav picture we need to complete the piece. If this was le Tour a gendarme would have us face down on the tarmac by now. But the Giro is different, if you’re cheeky enough, you can go straight through the bunch to the front, at the start – but only if your lead out man is the best . . .

But back to more serious matters for a moment.

It was a sad day yesterday, Donna Summer died.

She was the Empress of Disco, ‘I Feel Love’ is one of the tracks in the world of music which changed everything.

She was beautiful, charismatic, a mesmeric dancer with a huge vocal range – it’s very sad to know she’s gone.

I already love the Giro but this press release made me love it even more;

“The Giro d’Italia will remember singer Donna Summer who passed away today by remembering her life and playing her music at the start and finish of stage 13 from Savona to Cervere on Friday.”

A personal ‘grazie’ to the organisation from me.

It was a sad day too for Vacansoleil’s Tomasz Marczynski, as Dave and I feared yesterday, the time cut was his undoing – but respect to the man, he must have known he was doomed, but rode on, when he could have climbed in to the broom wagon.

We stayed in Genoa last night, the traffic was dire but the pizza was good. 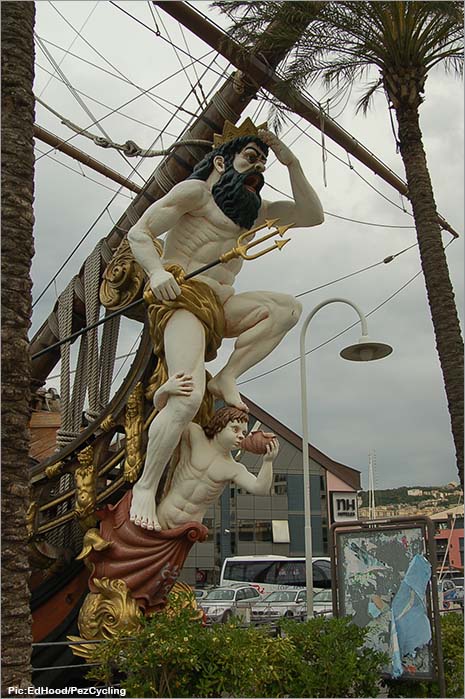 And it was good to see Neptune looking out for us on the way out of town. 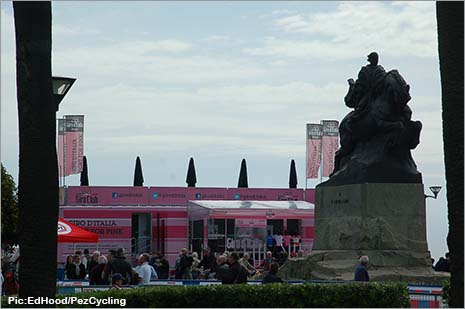 Savona sea front, Giuseppe Garibaldi surveys the scene from his horse – he’s not sure about all this pink and noise.

Meanwhile, ‘Dim all the Lights’ pumps – the sounds of my youth. 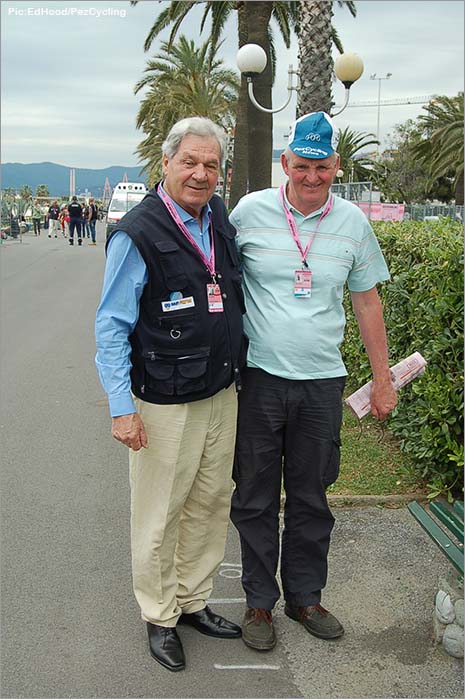 Legendary mad 60’s and 70’s sprinter, Dino Zandegu said ‘hello,’ to us, this morning – we were humble.

It’s really just to get the race up to the foothills to tee things up for the serious climbing over the weekend.

It’s a sprinters’ stage, albeit’s a tad sticky up to the 4th cat. GPM at Montezemolo, 37 K in to the stage.

After that, the trend is predominantly downhill with a couple of lumps on the run – but with a straight, flat finish made for Cipo’s train, or HTC.

Since it’s a day for the ‘velocista’ – the men with the big wattages and fast twitch muscles, we thought we’d concentrate on them, for the day.

We’ve chosen ten from this Giro: 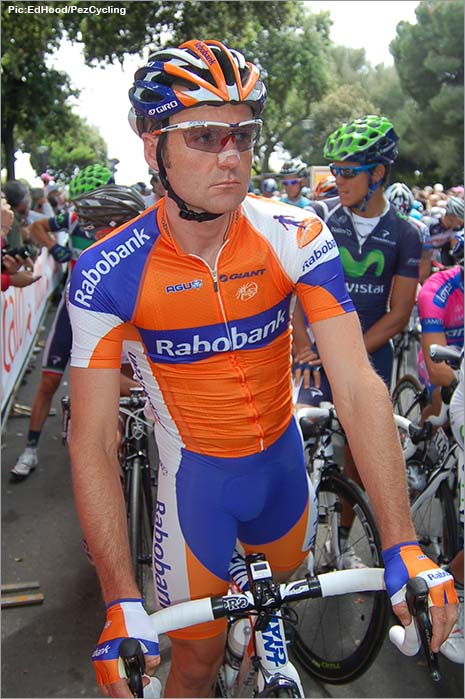 His best days are behind him now but he’s tough, very experienced and should form part of a great train at Rabobank with Theo Bos and Mark Renshaw.

Dave reckons that it’s the old ‘too many cooks’ syndrome – he may well be right.

Giant are still the frame suppliers at Rabo with electronic groupsets by Shimano. 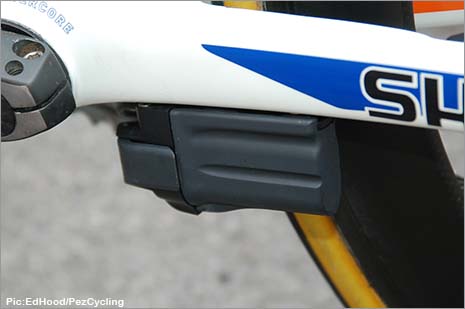 They position their Di2 batteries below the off side chainstay, close to the bracket – to our minds it’ll catch one hell of a water on a rainy day.

But the mechanics at Rabobank know their stuff. 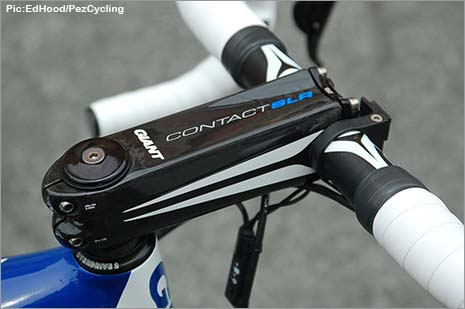 Meanwhile, Bos’s bike has the world’s most substantial extension. 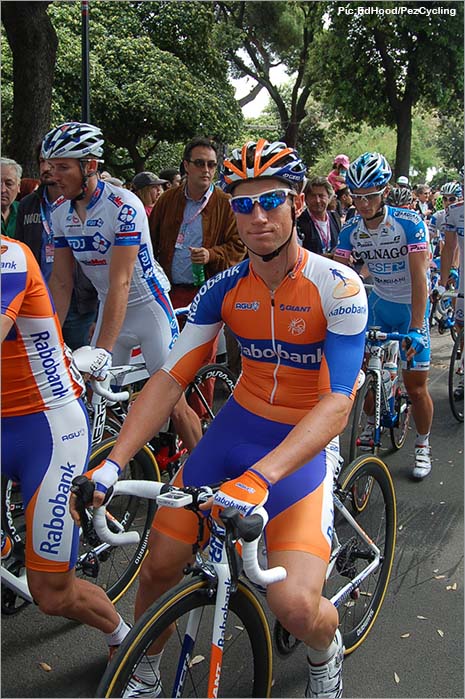 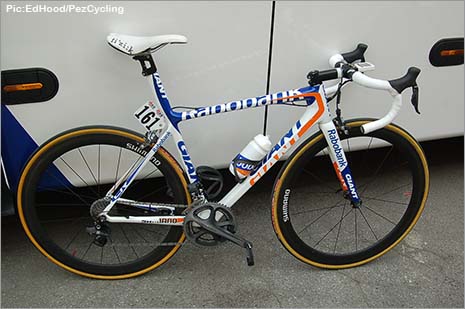 9: Mark Renshaw, Australia & Rabobank.
When he was with Cav at HTC he was the ‘best lead out man in the world.’

But as Michael Caine’s character in the film ‘Zulu’ says; ‘command is the loneliest job in the world’ and the big wins haven’t come. 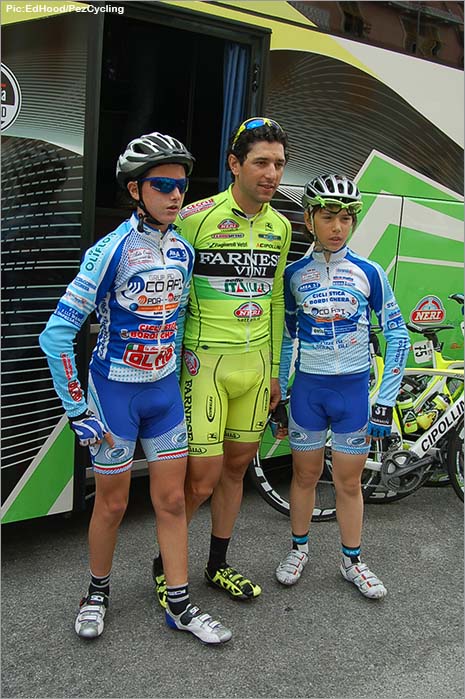 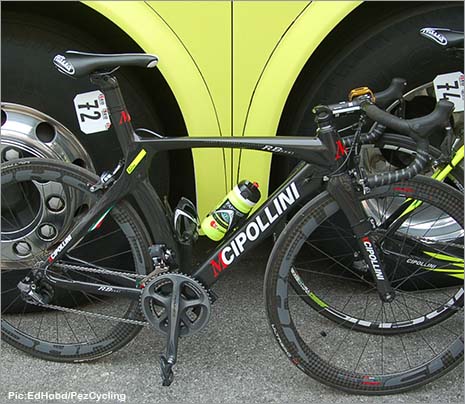 8: Oscar Gatto, Farnese Vini & Italy.
For a while, it looked as if Gatto was going to be that saddest of birds, a sprinter who can’t sprint.

But a bold late move which took him to a stage win in last year’s Giro has lifted his confidence and another stage win isn’t beyond him.

Farnese ride MCipollini, but not for Gatto the garrish fluo yellow, as one of the main men he’s allowed a ‘special’ colour scheme – black carbon weave.

Unlike most of the fastmen, he has a spacer in under his extension, giving him a less extreme position.

In the old days it would have been unthinkable for an Italian team to ride anything other than Campagnolo.

One season, Moser’s team came out equipped with Shimano and there was uproar.

These days, not an eyebrow lifts – and Farnese ride Di2 with the battery under the down tube, catching all the water from the front wheel on a rainy day. 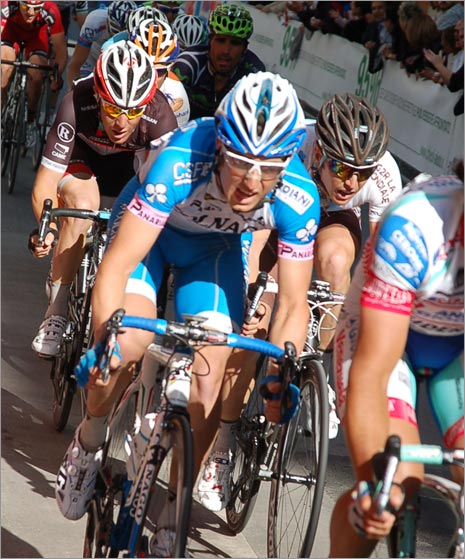 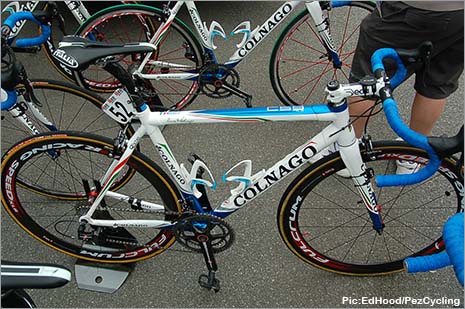 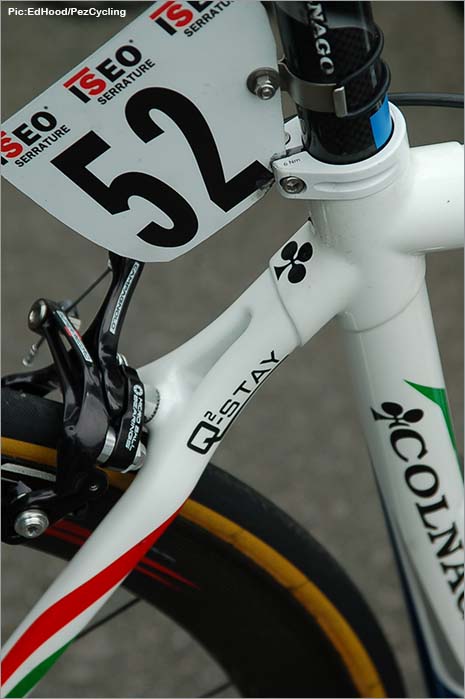 Since then he’s been building his palmares and was well placed on the stage into Montecatini but over-cooked it on the last bend.

His mount is a Colnago C59; the legendary Italian builder stays loyal to lugged construction, albeit lugs and tubes are in the wonder material.

We did notice however, that team leader, Pozzovivo rides a Revolution CHS monocoque.

No electronic gizmos on this team’s budget albeit Campag provide the groupsets. 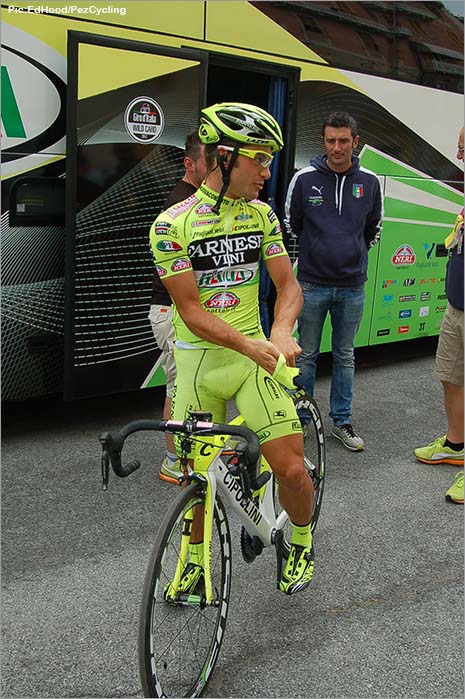 6: Andrea Guardini, Farnese Vini & Italy.
Guardini is tipped as the ‘next big thing’ in Italian sprinting.

He took Graeme Brown’s record for stage wins in Langkawi, this year.

Guardini doesn’t yet get to chose his own paint job and has to settle for Super Mario’s fluo yellow. 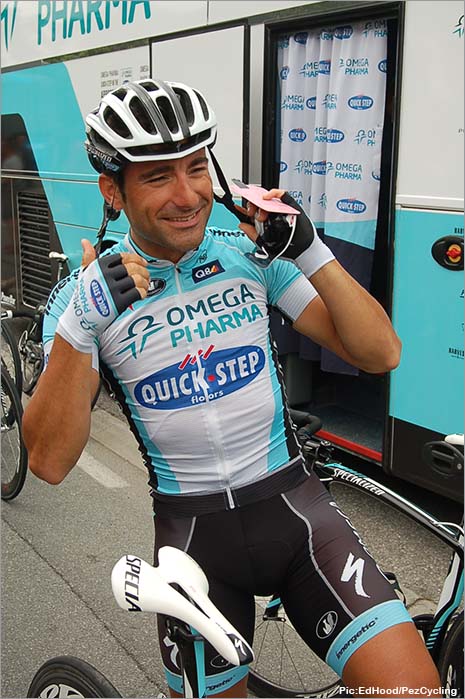 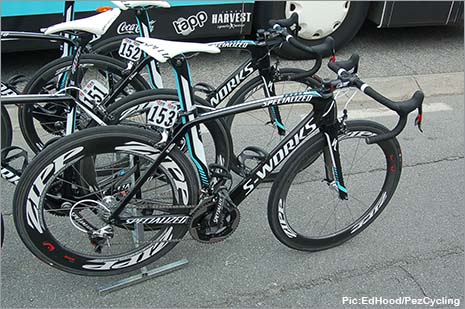 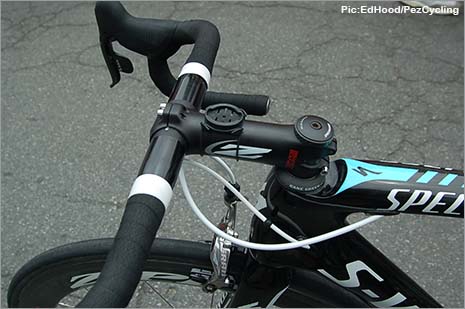 5: Francesco Chicchi, QuickStep & Italy.
The former world U23 road race champion with the Schwarzenegger thighs is having his best ever season.

He took stages in the early season Tour of San Luis in Argentina and then won two Belgian semi-classics within days of each other.

He was second to Ferrari into Montecatini and looks to be riding towards his best form.

Perhaps because of his excellent 2012 palmares, he gets one of those beautiful Specialized Venges.

Even given the top race position below the top tube Chicchi has his long extension hard down.

SRAM’s policy of giving groupsets to pro teams to go on rapid brand awareness and desirability, rather that selling them at ‘cost’ as is the policy with Campagnolo and Shimano has paid off with more than half of all the complete bikes now sold equipped with SRAM groupsets.

Specialized provide their own chainsets, with Quarq power meter compatibility.

No batteries required with SRAM gears but it doesn’t seem to have done Boonen any harm, as he rampaged across Flanders and Northern France, back in the spring. 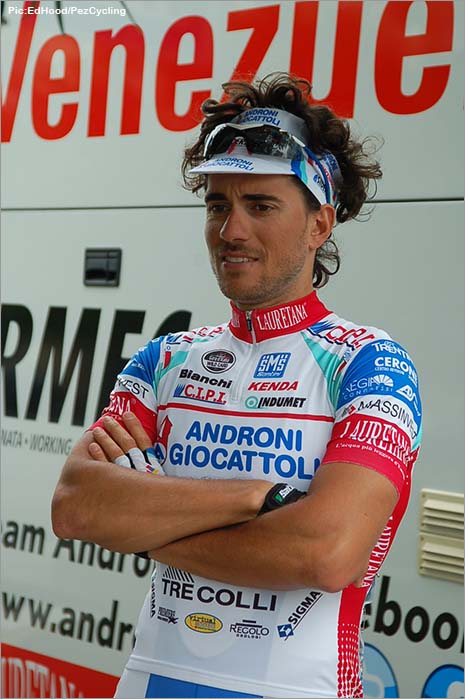 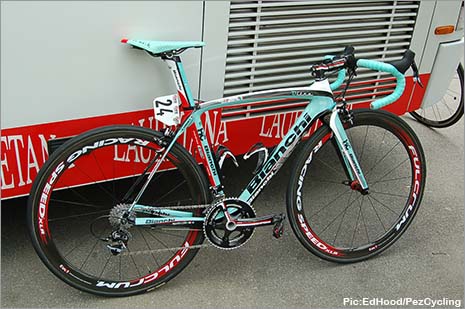 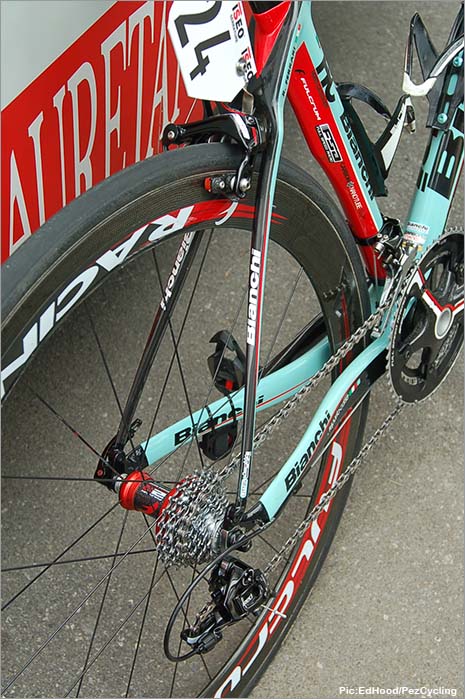 4: Roberto Ferrari, Androni & Italy.
A little bit of a ‘second string’ sprinter until two days ago when he won stage 11 in Montecatini, people will take him more seriously, now.

The man with the fast name doesn’t actually ride an extreme position – and we’re not sure why the UCi commissars haven’t picked up on his saddle position.

It’s well nosed down – under UCi rules, a spirit level placed across the saddle should be dead level. 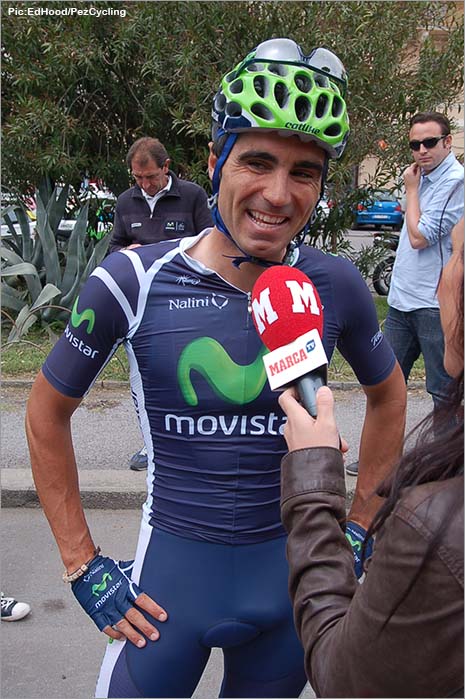 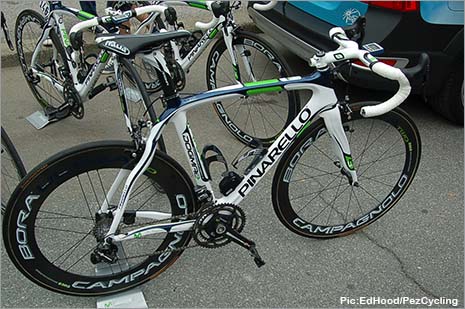 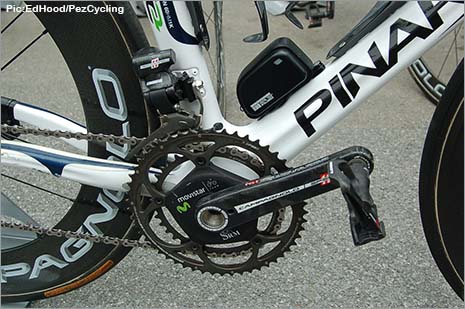 3: Francisco Ventoso, Movistar & Spain.
Success perhaps came too early for Ventoso, he won Philly and a Vuelta stage as a young pro under the wing of Mauro Gianetti at Saunier Duval.

And then the wins stopped, there was no new contract and a spell in the Continental ranks did him good.

In 2010 he won a string of good races – including Paris-Brussels – and for 2011 he was back in the big time with Movistar.

He won a Giro stage last year, out dragging Ale Jet – and added to it this year, staying upright in the madness into Frosinone.

Movistar debuted Campag electronic in le Tour, last year and stick with it for 2012 on their Dogmas.

The team sticks with the conventional position for the battery box, just below the down tube bottle cage. 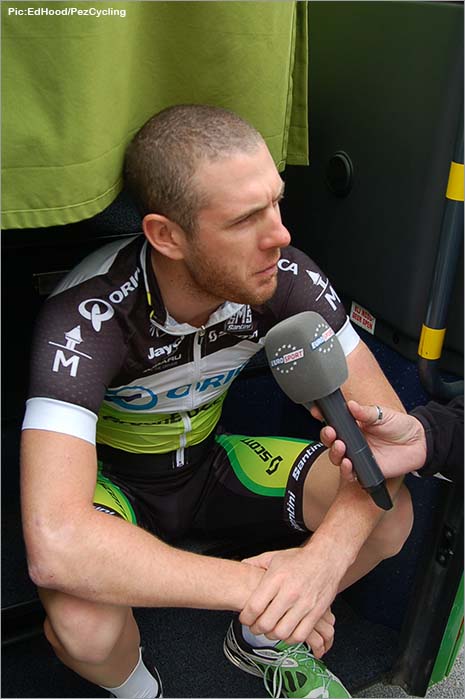 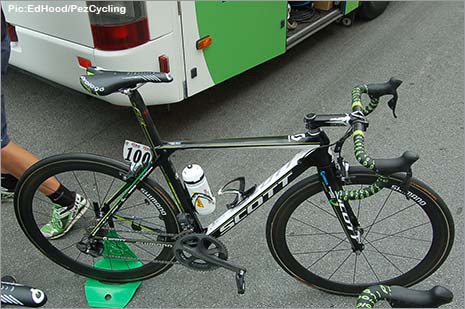 2: Matt Goss, GreenEdge & Australia.
Matt got his season off to a stellar start in 2011, capping it with a win in Milano-Sanremo.

There was a mid-season lull but by September, only Cav could get across the line before him in the Worlds at Copenhagen.

This year he’s started quieter with a view to peaks for the Giro – and later, the Olympics.

Always at the cutting edge of carbon frame design – the first to have full carbon fork ends – the new Foil looks mean.

Shimano provide the electronic groupsets, but we searched in vain for the battery pack on Goss’s bike.

‘Small battery, in the seat post,’ the mechanic confided.

Cav ran the same arrangement on his Venge at HTC, last year. 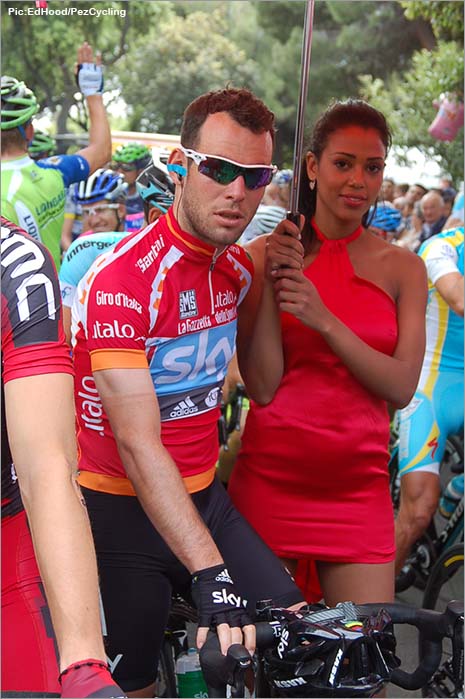 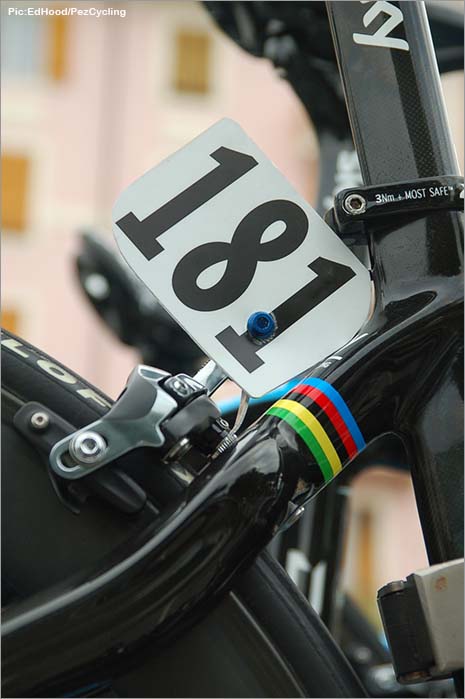 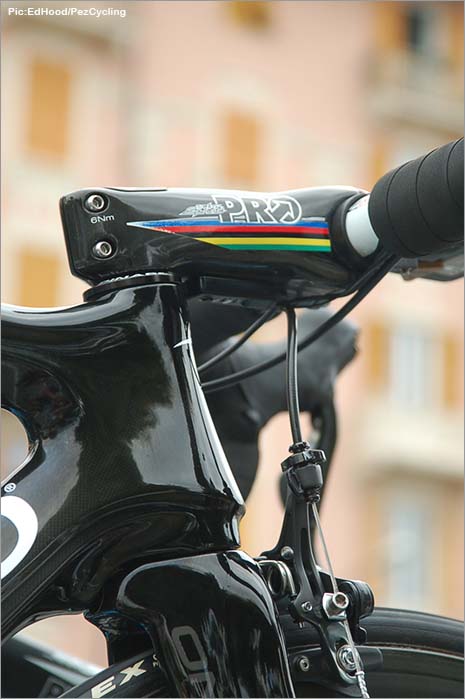 Will he go to the Tour ?

We don’t think he can, if they’re serious about Wiggins winning.

Can he win the Olympic road race ?

I’ve long since given up saying, ‘Cav can’t win.’

Pinarello’s curvaceous Dogma is his weapon of choice, complete with ‘asymmetric technology’ dialled in.

Cav gets a non-standard glosss black colour scheme and we’re glad that the world’s graphics whisper, rather than shout.

His extension rivals Bos’s for the ‘industrial’ look – but it’s got a real job to do when he unleashes, out of the saddle in 53 x 11.

And now that we’ve spoken about the fast men – who’s going to win, today ? 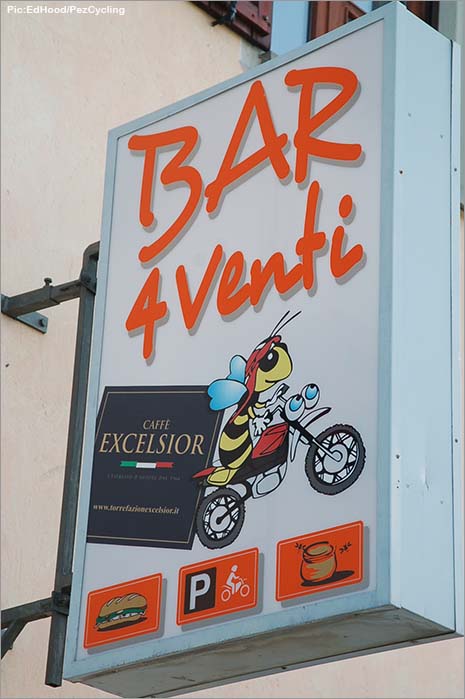 I say ‘Goss’ – GreenEdge just look better organised to me.

Sky try to organise in the finales, but apart from Thomas and Kennaugh coming off a team pursuit programme, the whole team have been working like dogs and are tired.

Kennaugh’s disappointment was palpable when he saw that Cav had been caught in the crash at Frosinone.

But despite a scrappy lead out, Dave gets it right.

Cavendish – despite a spell of freewheeling and going through a gap you wouldn’t put a ferret into. 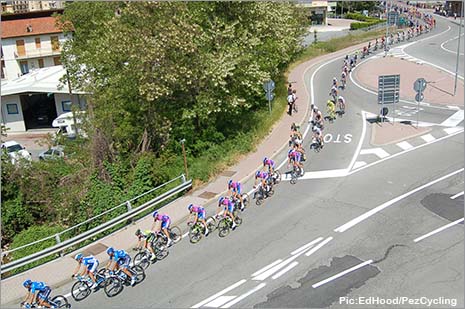 Mountains tomorrow – forget all those names above, please.