Giro di PEZ: A Quiet Day On The Stelvio

Roadside: Is that possible? It can be…if you go for a walk. It’s almost unnerving how quickly you can get away from the noise and craziness of a major Grand Tour stage finish if you just start walking.

It felt like we hadn’t finished yesterday, before today started. It’s a feeling we increasingly had over the final few stages – we just couldn’t keep up anymore…hence the fact you’re reading the piece on the Stelvio today and not five days ago. Details.

The Stelvio stage was pretty much impossible to chase. We could have managed an early spot, but it was only beautiful and not breathtaking, so we figured we’d just go to the Stelvio and see what all the fuss was about.

To get to the Stelvio from the Tonale side of the world, however, there’s one very large pass between you and Bormio – namely, the Gavia. It was pretty amusing when we realized we had to drive over the Gavia to get to the Stelvio. Oh the pain and suffering.

I always knew the Gavia was beautiful, but our drive over it on Saturday reminded me in no uncertain terms – this is one of the most beautiful roads in the world bar none. Towards the top, I hopped out to check on the old road…it’s still there, if only just. 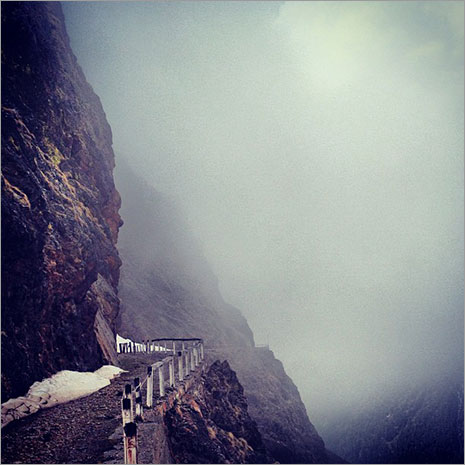 After enjoying the perfection of the Gavia, the two plus meter snowbanks at the top, and the very long descent of the pass to Bormio, we embarked on an adventure up the Stelvio. Typically, driving up the Stelvio shouldn’t be too big of a deal, but in this situation, with thousands and thousands of bike riders trudging up its slopes, we, as the race caravan, were massively secondary to the wave of cyclists making their way to the spectacular upper slopes of the Stelvio.

For that reason, I’m fairly certain that the likes of De Gendt, Hesjedal, Rodriguez, and many others climbed the Stelvio faster than we did in a car. It wasn’t so bad though. The spectacle was of the best variety, and what else did we have to do, right? Of course, I would have preferred to ride my bike up the climb, but we had a few things to carry to the top (as in, everything we own), and I couldn’t leave Ashley to drive up all by herself – that just wouldn’t be fair.

Once at the top, allllll the way at the top, I had the convenient epiphany that we would be better served taking pictures about 9k down from the finish. The police officers weren’t too keen on the idea, and Ashley was adamantly opposed to wading back down the mountain against the current, so I was left to go for a bike ride to get down to my preferred area. The horror.

Ashley elected to stay at the top, while I hopped on my bike, clad in quite a few layers of clothing, and headed back down. When I got to my ‘spot’, I realized I was one of many, many photographers who had decided that this was the photogenic section of the day. I guess I shouldn’t have been too surprised – the middle section is gorgeous – while the upper section is kind of not pretty, and the lower section is meh. From Bormio, it’s all about the middle wall of switchbacks. 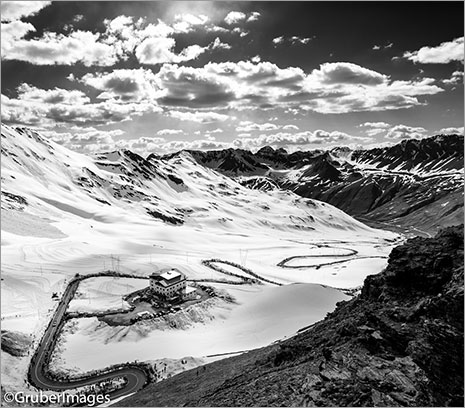 Ashley’s view from the top.

There were lots of people, lots of photographers, lots of everybody. At this point in the day, I was feeling a little asocial and in need of some exercise, so I elected to go for a hike. I crossed a creek and started traversing across the mountainside opposite the road itself. I walked for a while, found a good spot, sat down, surveyed the scene, thought I could do better, walked some more, sat down, surveyed, thought I could do better, and on and on and on. Eventually, I got to a point where I couldn’t even hear the babbling of the Giro vendor vans, and the people below were almost visually unintelligible. I was on a small rock outcropping with only mountain goat poop for company…and one of the biggest views of a road I’ve ever seen. It was heavenly.

I probably could have taken the shot I had in mind from this spot at that moment, but for some reason, I felt like I should wait for the race. So when you see this shot of the Stelvio, know that there really is a bike race somewhere in it. 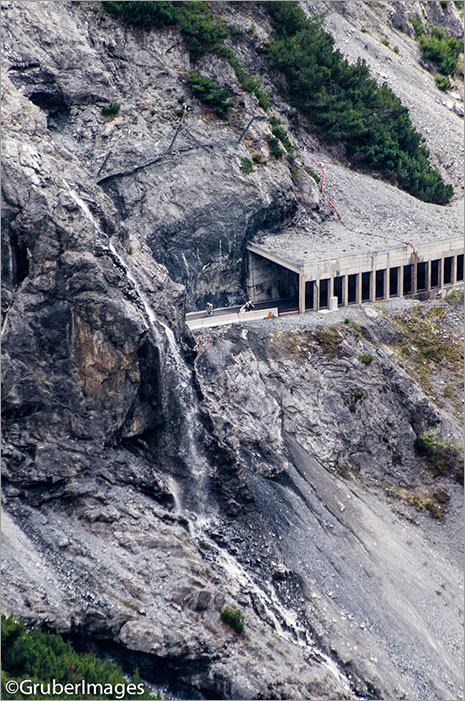 Thomas De Gendt emerges into view – of course, I had no idea it was him at the time. 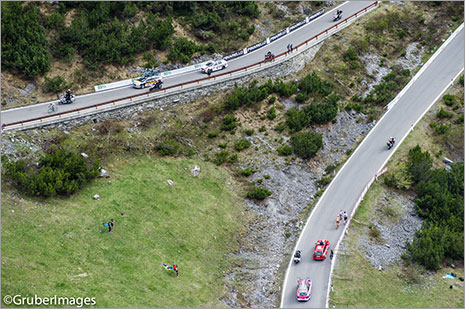 De Gendt is at the top left, while Cunego chases below. 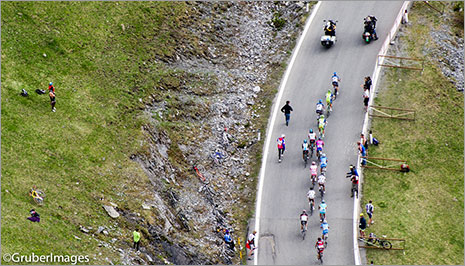 The leaders from above. 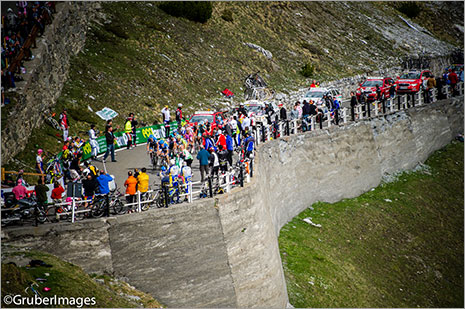 The leaders from almost straight on.

The best part? I got so caught up in taking long, long shots of the approaching race and running back to the race proper, that I almost forgot to take the panorama. I was running back from whence I started when I realized that I didn’t take the panorama, so I skidded to a stop, turned around, sprinted back to my perch, and snapped off three quick shots before starting the journey back to civilization. 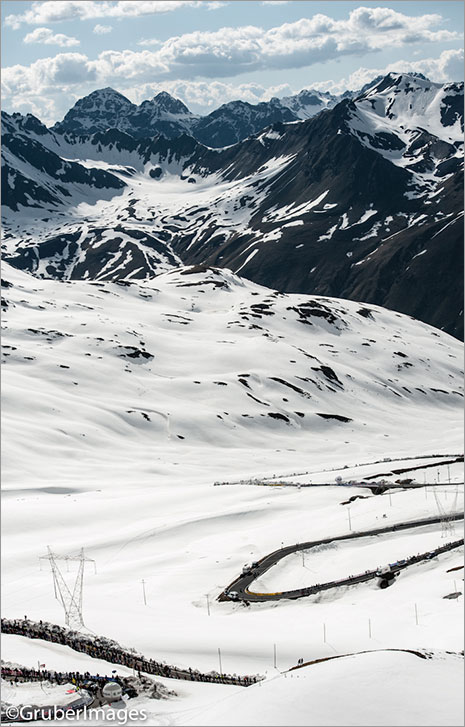 A little bit of snow left up there…

Far above even me, Ashley was apparently not content with the massive height of the Stelvio at 2758 meters – she hiked up to an old military installation for a helicopter-esque view of the final snowy section of the race. Pretty cool. 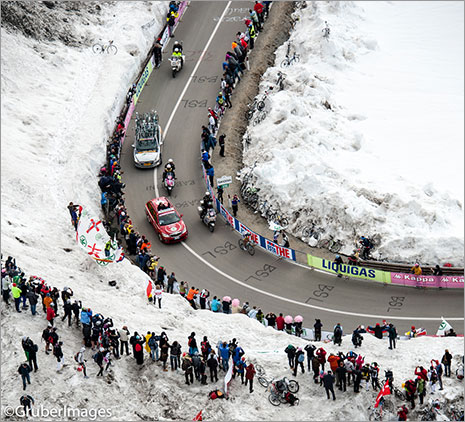 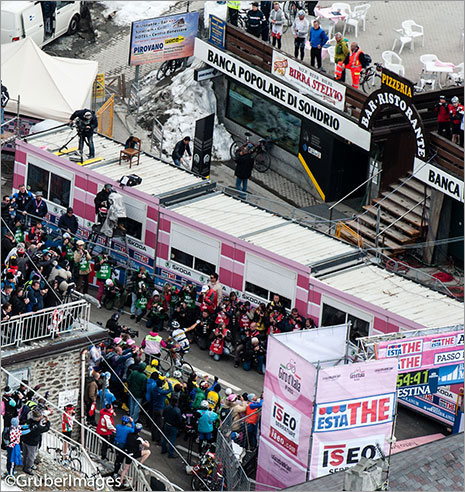 De Gendt crosses the line and puts a hand up in triumph. 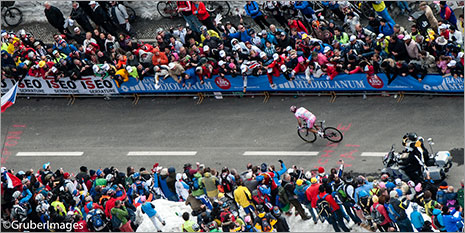 Rodriguez took some seconds back, but he needed more.

Back down below, once the leaders passed, the festival of race watching got restless. People that had waited hours upon hours on the Stelvio’s famous slopes couldn’t handle waiting another 30-45 minutes for the rest of the field to trickle through, so they hopped back on their bikes and made the final part of the race quite interesting – riders in the race moved slowly upward, while the fans greeted them heading in the opposite direction. 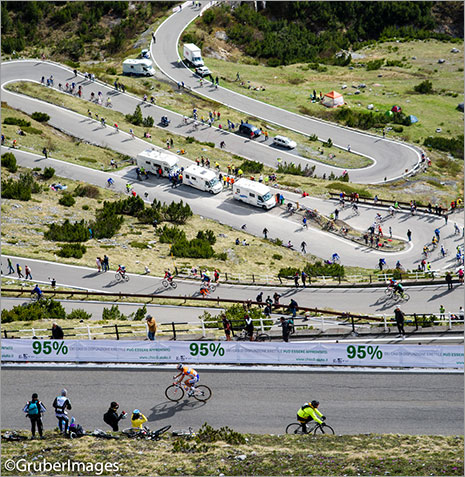 The Giro d’Italia shares the road with racers and fans alike on the Stelvio.

I know it’s not a big deal, but something about that just doesn’t seem right to me – you wait all that time, and then after twenty riders pass, it’s time to go home? It’s not possible to wait for all the riders to pass before you head back to Bormio? It’s like skipping out on a great dinner after the appetizer. On a huge mountaintop finish, the latter part of the peloton ends up being some of the most rewarding viewing…in my opinion. 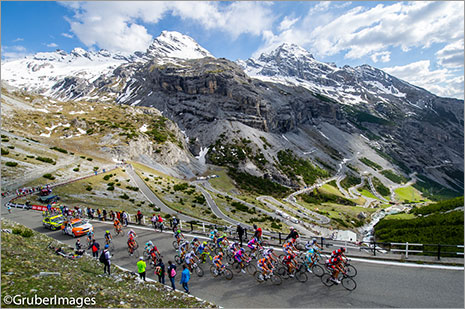 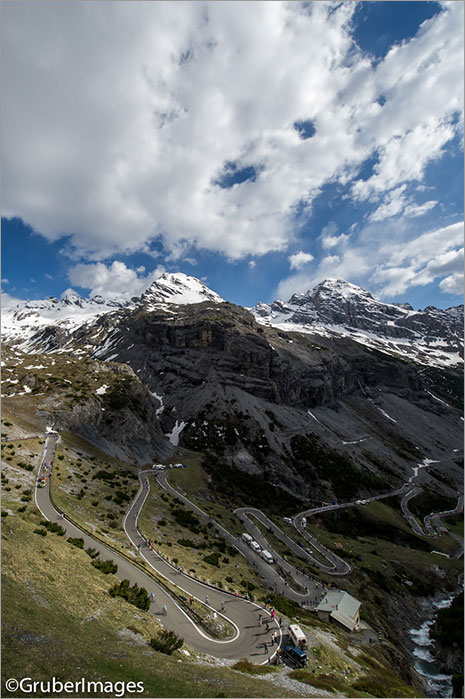 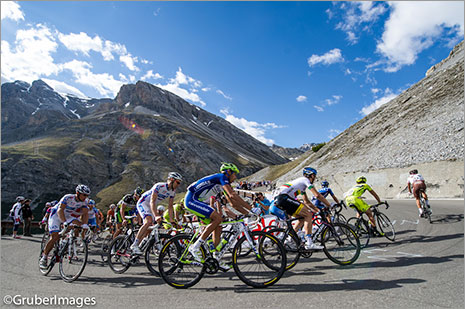 The field was tiny, but the groups following after the leaders were even smaller. Typically, the riders that roll through find some sort of reasonable group to share their suffering with, but on the Stelvio at the end of a day, which included over 5000 meters of climbing, the larger groups were mostly nonexistent. I think the gruppetto might have been 15 or so riders – most everyone else came by in groups of 5, 4, 3, 2, and many times, alone. 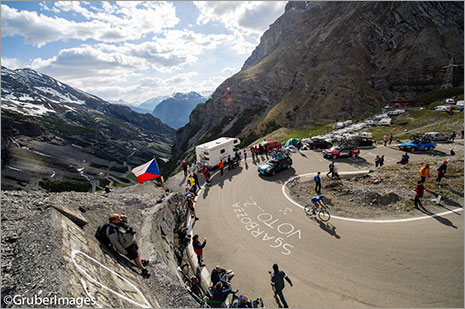 Once the broom wagon passed, I realized that I still had some work to do. I had been doing my best to avoid thinking about it, but this was one bike ride that I wasn’t too excited about. I was sick, tired, and weighed down with all of my camera gear, so while riding the Stelvio is a dream come true…riding it in that situation was not my favorite – at least at first. After a few pouty minutes, I started to come around. How could I not?

I climbed so slowly back to the top on account of my condition at the time, but it was one of the more pleasant slow rides I’ve done. In fact, I’d say it was a pleasure. Considering my thoughts at the beginning of that ‘ride’, I’d say that was a huge success. 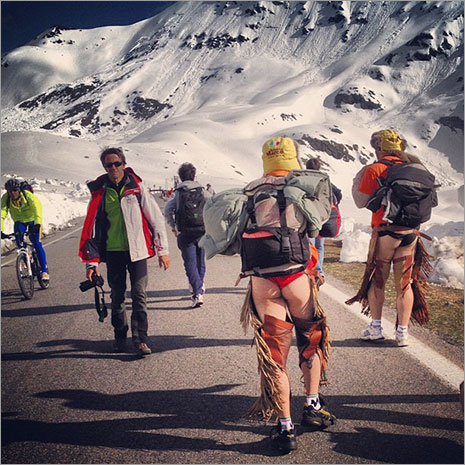 Favorite moment? Passing two cowboys in ass-less chaps. It doesn’t deserve noting just for their costumes – it has been done a million times before in a million different situations, but this one was hilarious because of a mother and her small son. The mother, walking down the mountain, toward the two men, spotted the two and said to her child: ‘Look! Cowboys! Let’s go say hi to them!’ I can only imagine the look on her face when she realized who she had run up to with her little one. The things you see and hear on a mountainside at a professional bike race…

While riding up to the top, I had this idea that when I got to the top, we’d be able to go down whenever we wanted. I was wrong. The race kept the Giro caravan that had parked at the top for a couple of hours, including the team cars. For the riders in the race, this meant two possibilities – ride your bike down (which many did), or take the sweetest helicopter ride ever…which is what Ryder Hesjedal was on his way to do when I took the below shot off my bike. While shooting Peter Stetina this week for Castelli, he confirmed it was one of the cooler views he has had of the mountains. 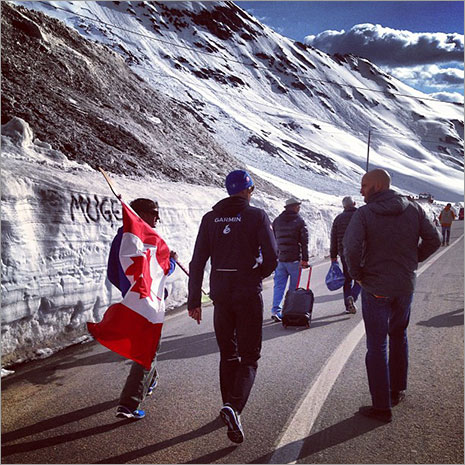 Ryder heads to the helicopter.

So, with nowhere to go, we reluctantly headed back in to the press room and started working there. We left around 830pm and started the 3.5 hour drive back to Milano. 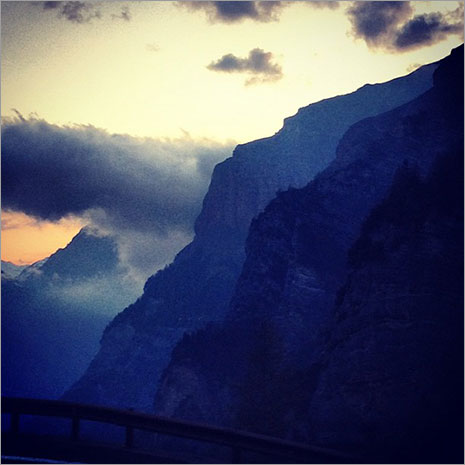 We had some nice views on the way…and a quick pizza in Tirano.

I can’t complain too much.

• Book a room in Bormio