Roadside: ‘Finalemente Italia’ says the headline in the Gazzetta – of course, it applies to skinny, tough as old boots, Sicilliano climber, Paolo Tiralongo’s stage seven win. The first of the race for a ‘home boy.’ But it could also apply to us, a winter spent in dark, six day halls, hiding from the cold; an early spring in chilly Flanders – and finally, the 25 degree heat of an Italian late spring.

Cactus are thriving roadside – they’d get drowned in Scotland. 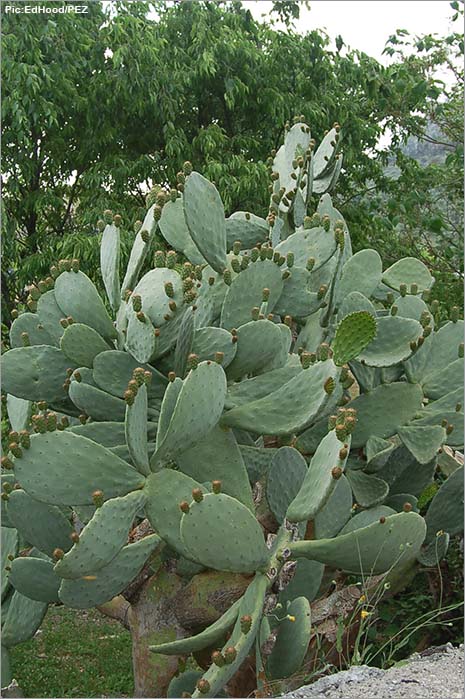 We flew in to Rome this morning (Sunday) and collected the hire car.

Our Capo has pushed the boat right out and hired us a Fiat Panda – the radio works fine, so does the aircon and . . . . . 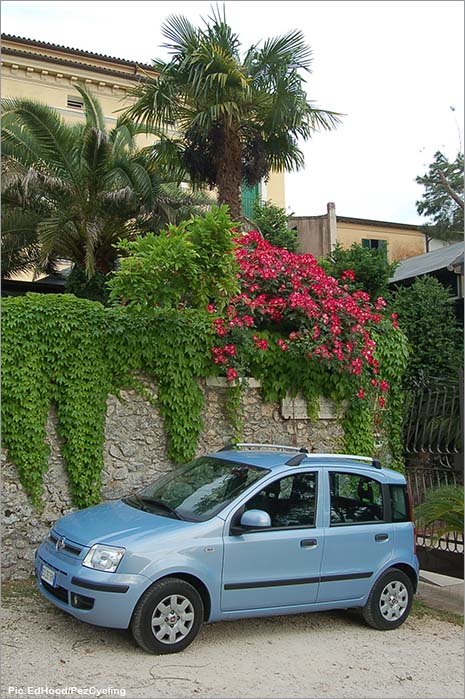 Formalities take an age in Italy; fly in to Charleroi and it’s a three minute walk to the hire car desk and you’re on the road within another five minutes.

Roma requires a ten minute hike to the Hertz desk, and whilst the freckly blonde girl on the desk is lovely, you wouldn’t need to be in a rush.

First up is to grab a Gazzetta, I’ve been getting them in Edinburgh, but a couple of days late and at exorbitant cost. 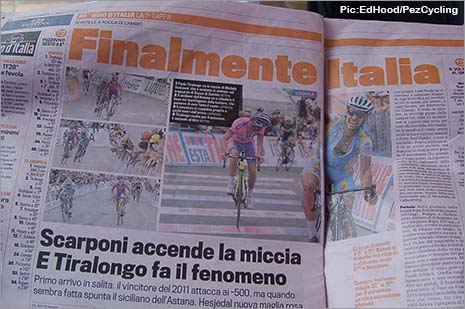 I always turn to ‘le Pagelle’ first – where they rank their ‘men of the day.’

Tiralongo and second placed Scarponi are on 9 out of 10; Schleck gets 8 – is he going to surprise us ?

Whilst Hesjedal gets 7, Basso is on 5.5 – apparently they’re worried that he lacked a little in the finale yesterday, but his form will be confirmed today, they say. 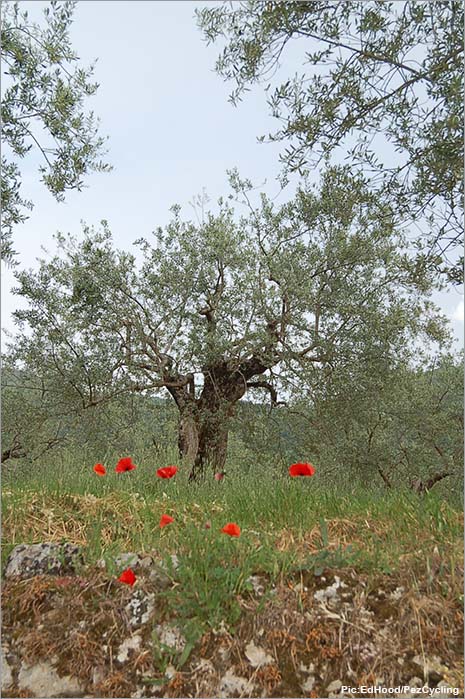 Olives and poppies…it’s springtime in Italy.

On the subject of which, it’s three star day with the race’s second summit finish.

It’s a long, lumpy old stage which goes up or down all day for 229 – with two categorised climbs.

Yesterday was a ‘first’ – Ryder Hesjedal became the first Canadian to don the maglia rosa. 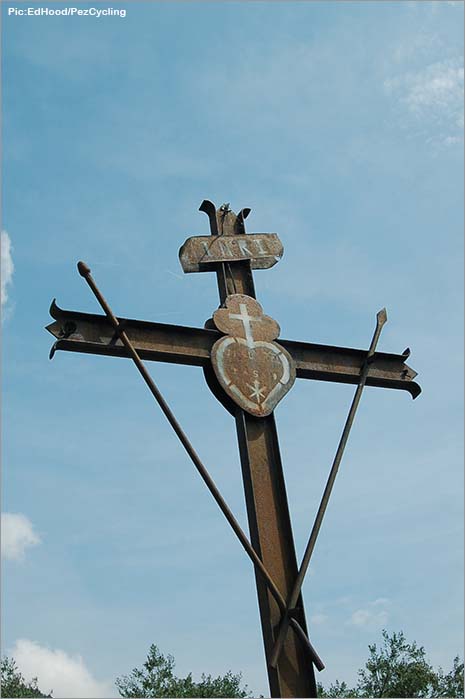 Canada is the 22nd nation to be honoured by the maglia rosa.

Ireland has had 18 days in pink, largely thanks to Stephen Roche in 1987; the USA is on 13 days, with Andy Hampsten the first in 1987; Australia has nine, starting with Cadel Evans in 2002 and ‘Gran Bretagna’ is on three courtesy Cav and David Millar.

Second ? Belgium on 160 – many of those thanks to a certain Mr. Merckx who won five Giri. 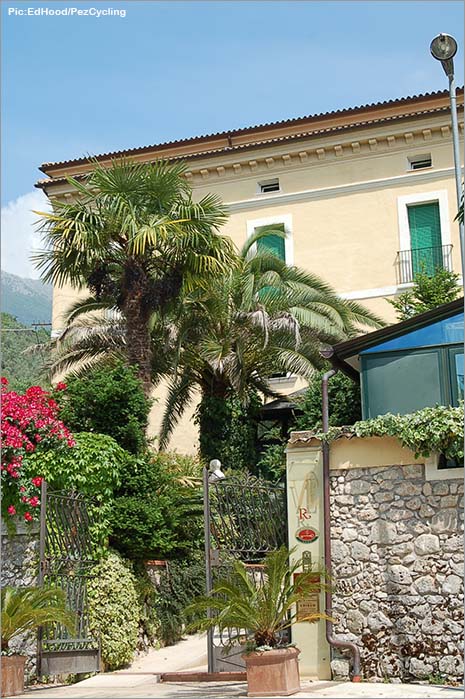 We didn’t have time to make it all the way down to catch the stage – but we did make it to our digs in Castrocielo.

We’ll pick up our creds in Frosinine ‘a domani’ and get fully involved.

Through rose tinted glasses, back in ‘Angloland’ we think that Italy is obsessed with the Giro – that’s not the case.

Football is the number one sport by a country mile.

The first bar we tried didn’t have a TV, but it would be rude to leave without buying a beer.

A helpful local directed us to a bar just down the road – ‘veedeeoo and teevee’ he assured us.

It certainly did, three plasmas, but all tuned to soccer – Juventus were in action.

Remembering our manners again, we ordered our Peronis before we asked if it may be possible to tune one of the monitors to the Giro. 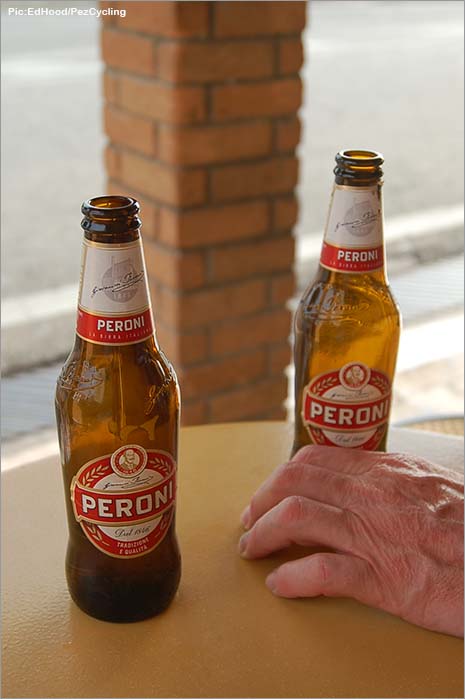 The barman screwed up his face, calculated how far was to go in the stage and computed how much Peroni we’d put away in that time – and in no time, we were on Rai Sport.

No one so much as glanced at the TV as we settled down with our Peronis and glorious ham and tomato paninis. 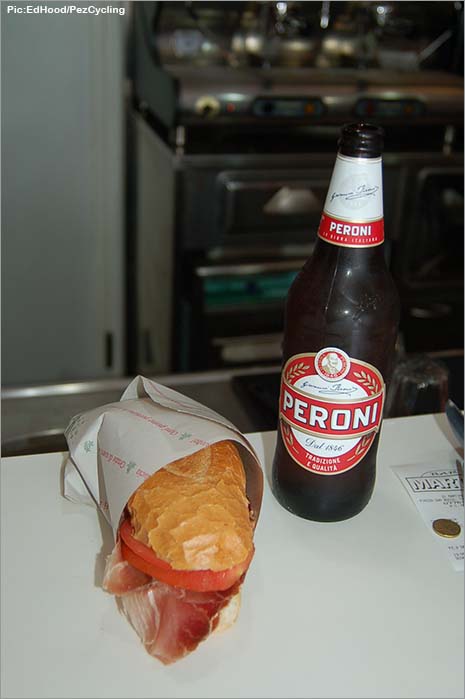 I was ordering cappuccino when Ryder had a spot of bother – I’m not sure what, but he was out the back. 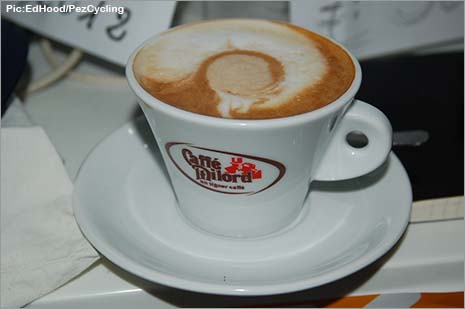 Jack Bauer draws from that seemingly bottomless well of energy to go back for his team leader – from kermis king to super gregario.

The last climb is a beast, at the rear of the bunch men are dropping like autumn leaves.

The barman gestures dramatically for our next Peroni; ‘no, no, piccolo !’ I say.

There are 10 K to go, Gaspa drives, Astana mass behind him; Liquigas and Lampre are right behind them – the ‘Bigs’ aren’t messing, today. 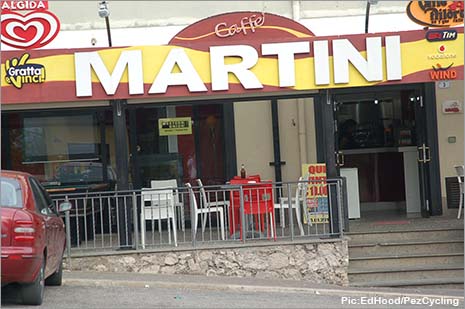 Szmyd takes it up for Basso – Stetina cracks, so does Casar.
‘Sempre Szmyd’ says the commentator – ‘always Szmyd.’

On the tops, impassive, the Pole is impressive – Ryder is at the back, fighting, the gear looks too big to us.

Pozzovivo goes, focussed, no looking back – all or nothing.

No panic from Szmyd, he knows his rhythm is good.

Dave pours his Peroni as Ryder fights that gear.

The working guys who come in for a beer or lottery tickets only have eyes for the football.

Visconti has gone, Pinotti too.

Intxausti tries to get across to Pozzovivo, but he rocks, swerves and sways whilst the Italian is solid.

Ryder is back, straight to the front, the jersey is at risk.

The roadside police snap pics on their phone.

Pozzovivo is slogging that 11 like an English amateur time trial rider on a dual carriageway.

He’s still gasping as the mics get thrust into his face.

Outside the Juve fans drive past, horns blasting – they won two-nil. 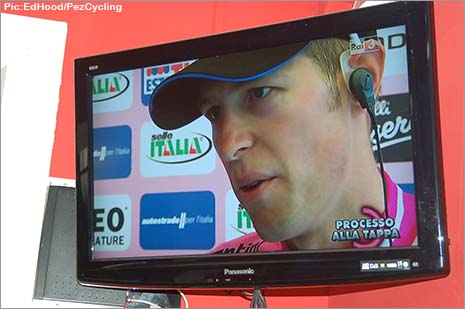 Ryder keeps that precious pink jersey – as the podium girls have to bend down to kiss tiny Pozzovivo’s cheeks.

A good stage, good racing and another home win.

Ryder sprays the champagne, another day in pink – why wouldn’t he look happy ?

We’ll be journos tomorrow, but on a Sunday, it’s good to be a fan.