Giro di Pez: And THAT Is A Wrap!

Roadside St.21: I comment every year how taxing it is – physically & mentally – chasing this race and doing daily roadside coverage like we do – and for good reason – the truth is that sometimes this job ain’t quite as glamourous as it might seem. As much fun as it is – and it is – it can be tough. 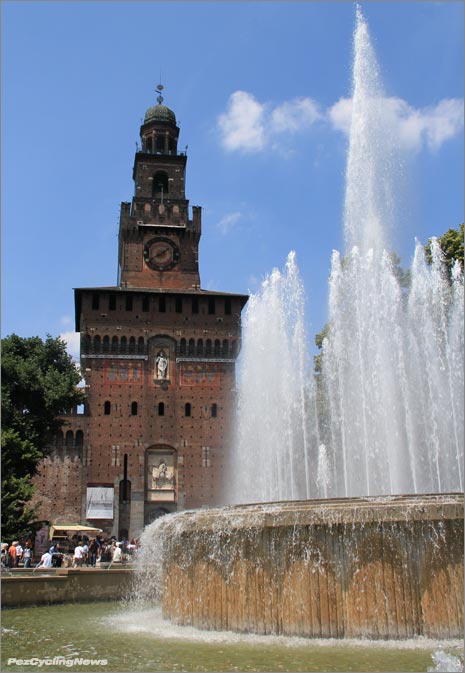 The original stage start was moved from the Castello in Milano, about 15km out to the far end of the course in Rho, so things were a little quieter when I arrived Sunday afternoon.

Covering the race really requires a driver, since the long hours behind the wheel are especially demanding, and while most of our Grand Tour crews are two man teams – I usually end up going solo. On the one hand I like the solitude – especially since my home life is firmly in the trenches of raising two young girls – Alessa is 5 now, and Loredana is 20 months. My home-office allows me to see girls throughout the day, but lacks any separation between workday and ‘dad’s home’ time in the evening – I kinda got straight from one job to the next. Combine those two and it’s full on activity from morning until the little ones get tucked in, and Mrs. Pez and I usually opt to crash early ourselves. 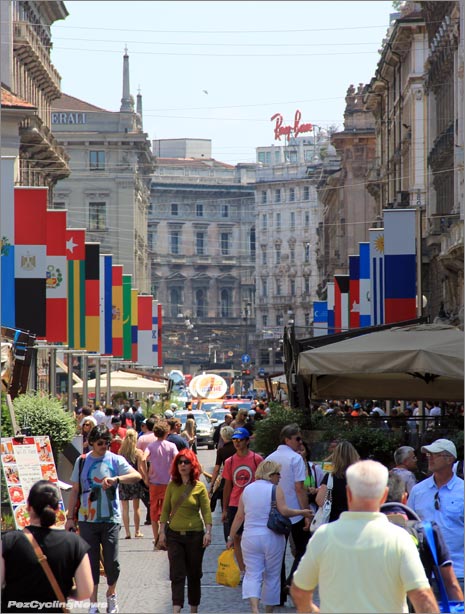 A walk around the team bus area revealed nothing as it was still a couple of hours before the race would even start. Once again the sun was shining and great photo opps revealed themselves from every direction. The start is thatta-way.

I’m sure any of you parents out there will remember these days, and I know they’ll eventually come to an end and I’ll probably even miss them… but for now, life is a lot of work and lot of tiredness.

So while I look forward to some peace and quiet, this year I showed up tired, and after a series of continual set backs (including a crash while descending the Passo Giau), and driving myself from Milan to the Dolomites, back to Bergamo and onto the Alps, then finally back to Milan, I found myself even further in the hole, I just got more tired as the days went on. 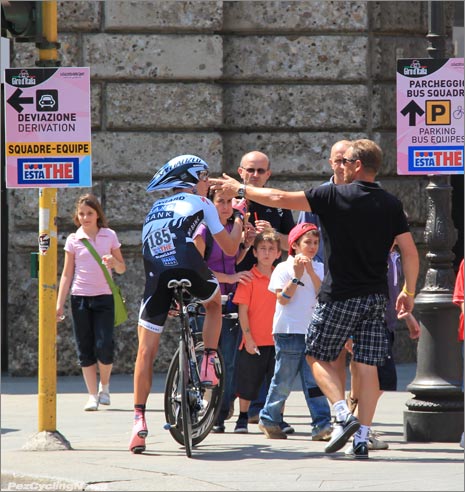 The team busses were located directly down the pedestrian only street called via Dante, but with the Sunday afternoon ‘passagiata’ in full swing, and no cordoned off route for the riders, it was easy to get confused looking for a way back to the team bus after the training runs.

My luck did turn however – after the stage passed over the Colle della Finestre, and I got off the mountain before the crush, then 170’d it all the way to Milano, where the single parking spot in front of my hotel was actually vacant – !

I took this as a sure sign that things were on the up. 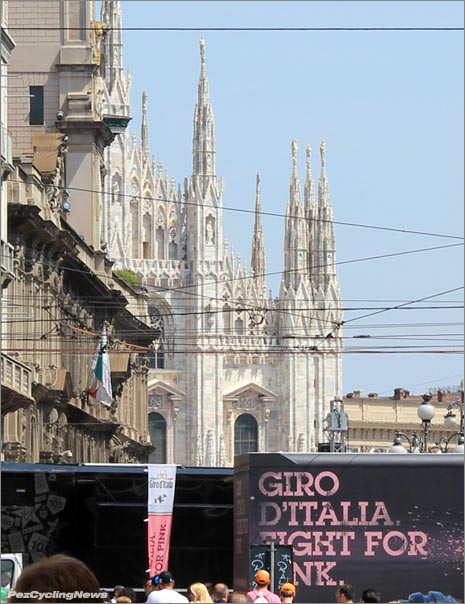 As I strolled along with the crowds, the echo of the booming euro-pop that is so annoying loud at every stage start sounded the homing beacon to the race proper.

I’m now in the stage where being away from home and family is a nice break for a day or two, but in this period I really like being with my girls – so a trip half way around the planet is a lot further than it used to be.

And those hours behind the wheel between stages allow for a lot of time to think about life, and really appreciate what I’ve got. It also offers up new appreciation for the support and work of the PEZ Crew – who all show up on time, and do more than what they said they would – to turn out our all original content. This year I had less time to stay in contact with the guys during my time at the race, but the content was always there and I had one less thing to worry about. 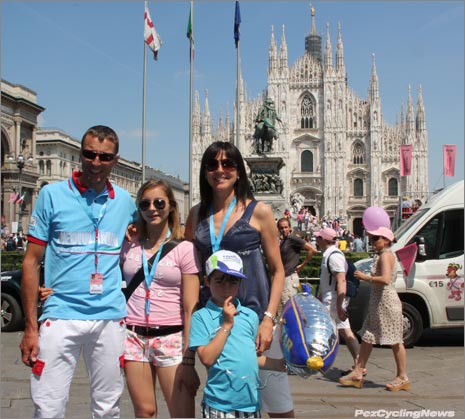 I bumped into former World Champ Maurizio Fondriest and his family – he was gladly posing for a shot with a fan, so I waited my turn to say hello – then snapped this family portrait wth a promise to send him a copy (no promises were made however that this woud end up in the Fondriest family album.)

I’ve been riding Fondriest’s new R10 mid-range carbon racer, the past week, and will have a full report coming soon. A big thanks to Maurizio and Gianluca at the US distributor Albabici for setting up the ride.

Here’s a big thanks to the awesome Pez Crew:
• Ed Hood & his driver James for getting us through stages 1- 9 and the tragedy of losing Wouter Weylandts,
• Alessandro for his so uniquely Italian perspective on stages 10-12 up the Adriatic,
• Matt Conn and his driver for a fresh look at the race as it went into the Dolimites for stage 13, 14, and 15, and
• Gord Cameron, Alastair Hamilton, and Dave Aldersebaes for covering our race reports, and of course to
• Jered Gruber for always finding internet and making sure our stuff was posted. 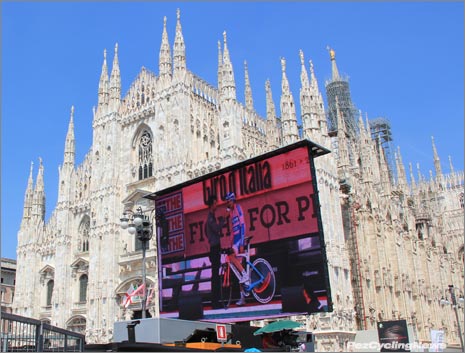 Milan’s famous Duomo is the center of town, and the obvious center for today’s activities. The massive square was filled with the race course, official finish line (right in front of the Galleria), a red, white & green promenade that took racers past the vip seating and onto the huge stage where the final celebrations would take place. 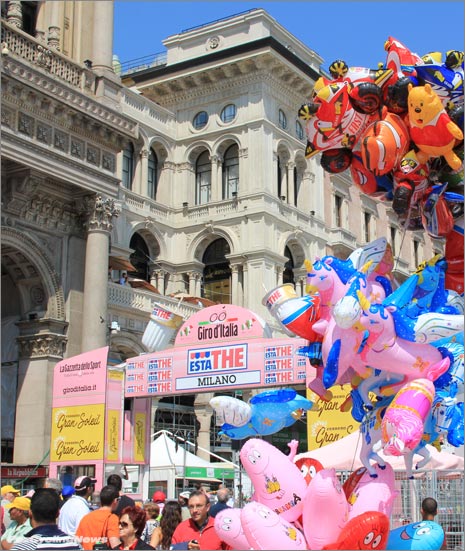 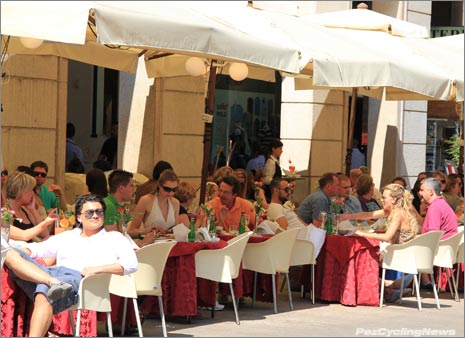 Even with all the hoopla going on just meters away, life at the cafes lining Corso Vottorio Emanuele II was apparently unaffected. 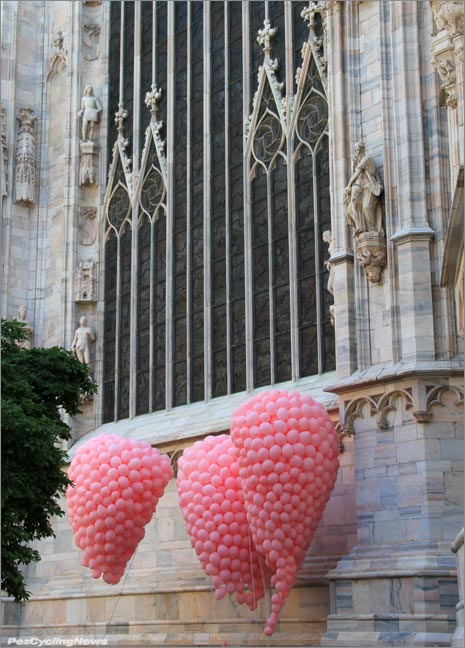 I spied the celebratory pink balloons safely tucked away behind the Duomo – in a shady spot where the sun’s heat wouldn’t be popping any these before the big release. 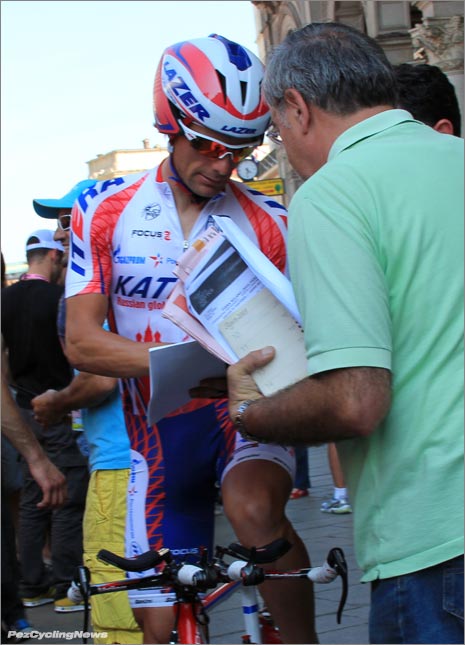 My back stage access got me into the area behind the main stage, where all the riders would pass through after their runs. You’re probably wondering why I have another pic of this former Giro winner turned busted doper, especially since he performed as nothing better than pack-fill at this year’s race. I’ll admit he’s not my favorite racer, but I observed on a few occasions how popular he is with the tifosi. Just after he finished his run, and was about to head back to the team bus – a fan on the other side of the fence caught the attention of one of the marshals and asked if he could get Di Luca to sign an autograph. The marshall grabbed the fan’s pen and paper and took off after Di Luca – who promptly stopped and signed the paper. Think what you want about the guy – but that was a classy move. 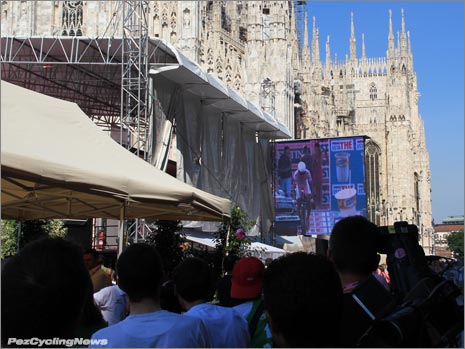 Just after 5:00 PM local time, Alberto Contador set out as last man onto the corsa. 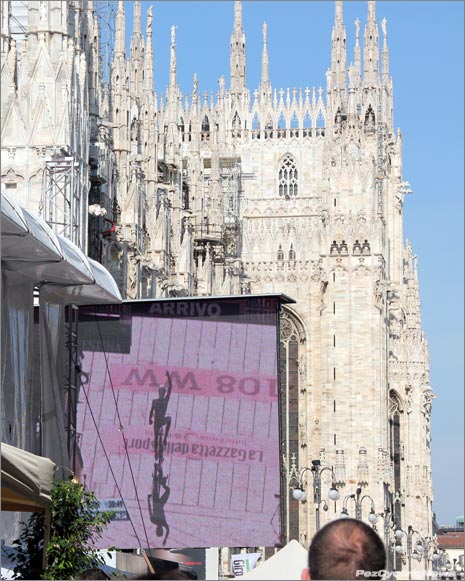 And just around 29 minutes later, crossed the finish line with his trade-mark salute, and his sixth Grand Tour win official. 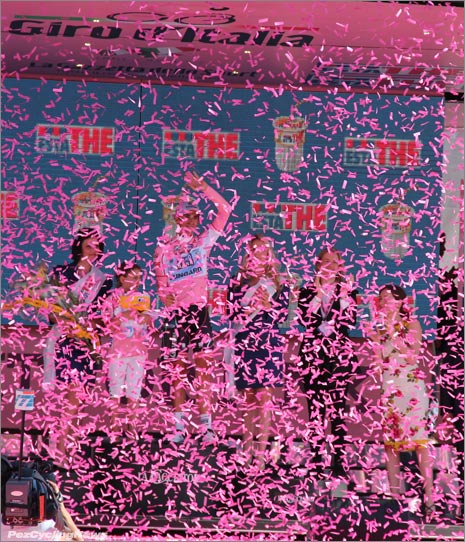 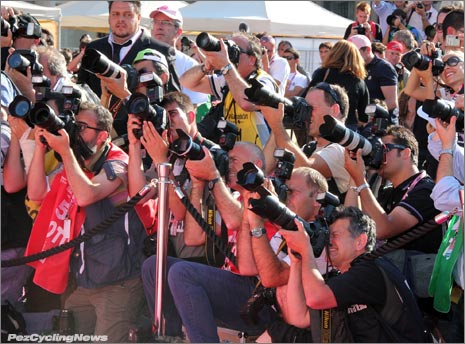 Here’s a great shot of the official photogs clamouring for gold as the three winners took their victory parade along the pink catwalk in front of the stage. My regular press creds weren’t enough to day to join that crowd, but as we found our own ‘backstage’ access, I ended up with a whole different view of the proceedings. 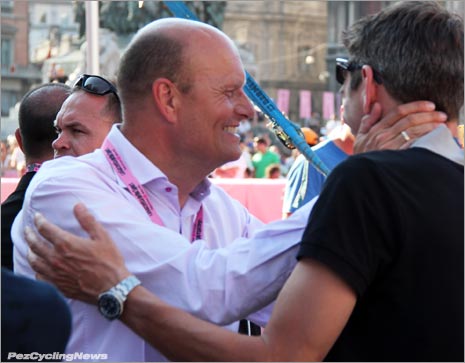 And here’s another shot you won’t see too often – yes, Bjarne Riis is smiling- big time. 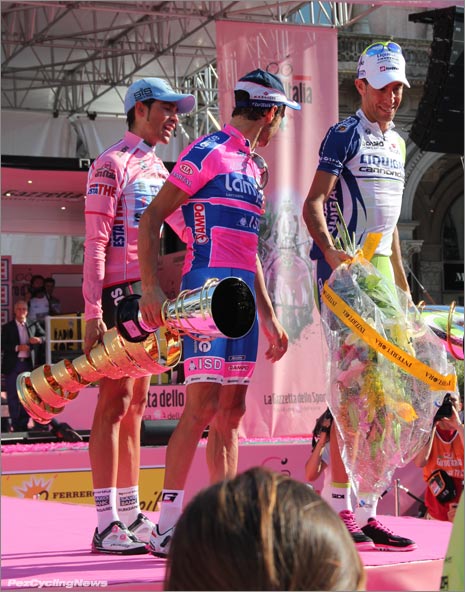 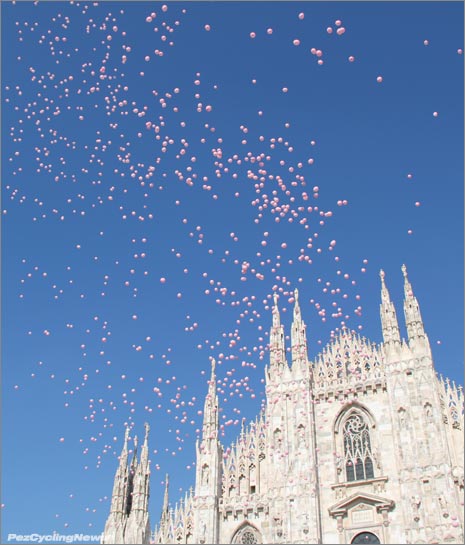 With the winners’ celebrations coming to an end, it was time to let the balloons rip… Getting this shot has become an unofficial ritual for me, and always comes with that slight pang of sadness that the whole journey is done. 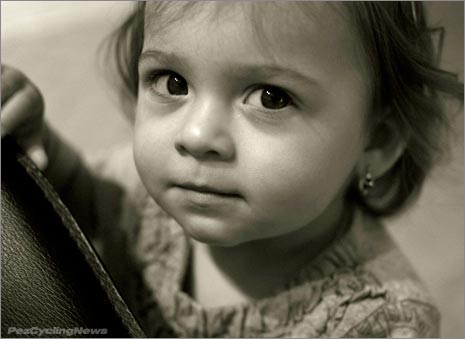 Meanwhile back at home Mrs. Pez has had her hands full tending to our little flock, and while Alessa asked me every day how many more sleeps until I come home, this photo of Loredana tugged especially hard on my heart strings.

It’s time for me to get back where I belong. 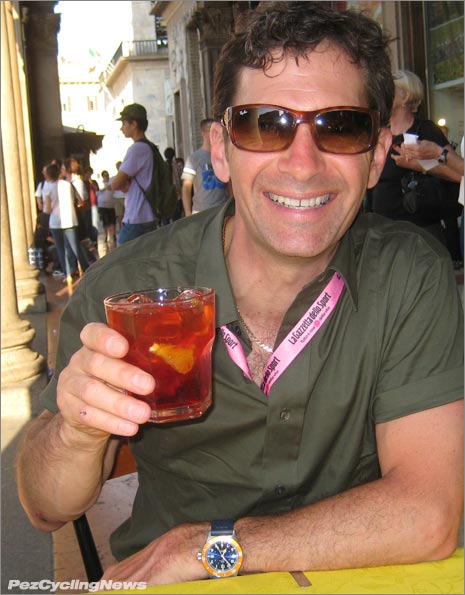 So thanks to everyone for reading our coverage – I hoped you enjoyed it and that we showed you a side of the race you haven’t seen before. No two years are ever the same, and each have their high and low points, but after covering seven of Giri, I’ve come to appreciate that we’re all pretty lucky to be a part of this sporting spectacle, even if it’s only for a few short days of the year.

Ciao and thanks for reading –
Pez